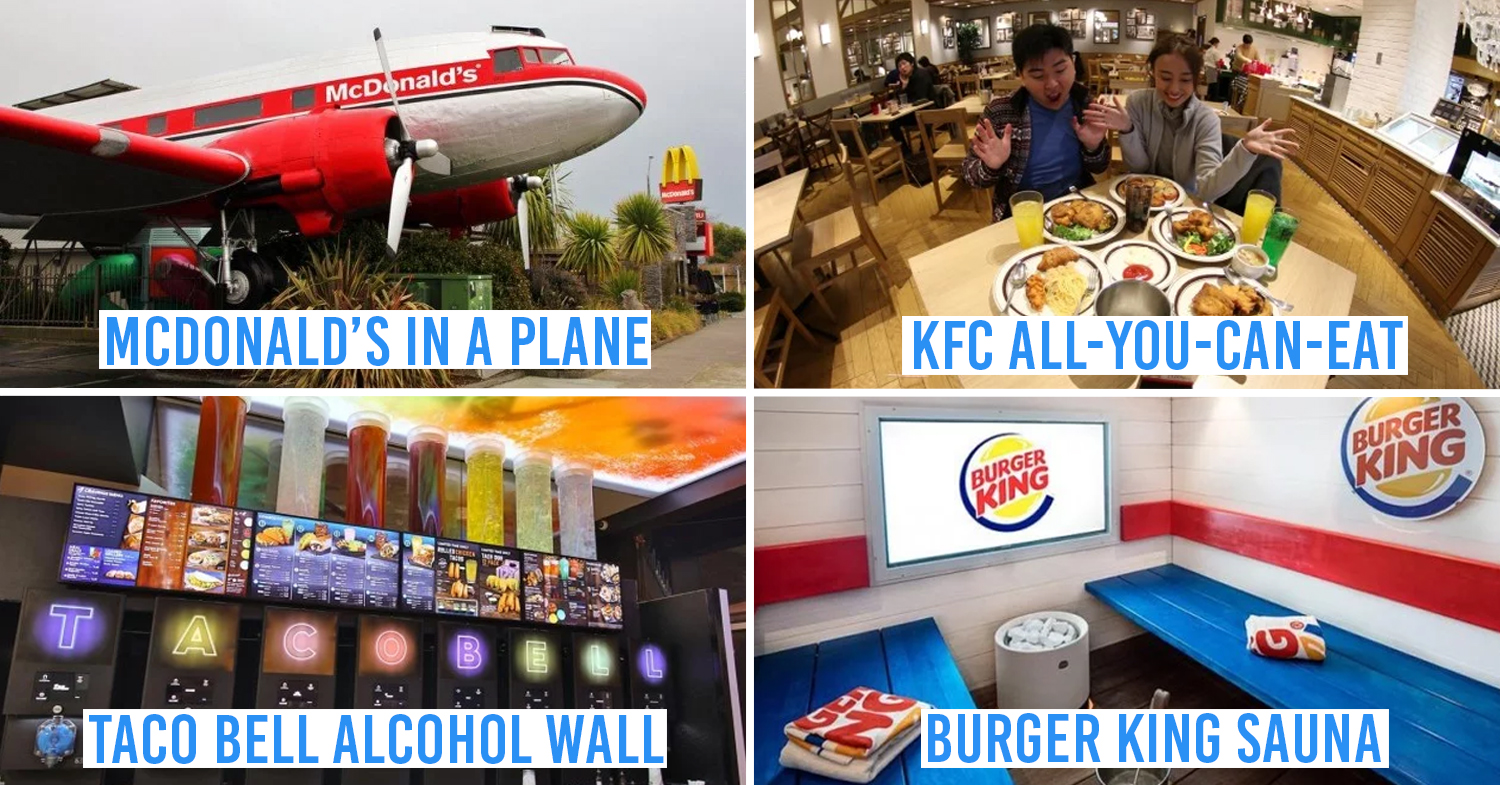 While the other fast food restaurants in Singapore aren’t as unique, there are some Macs/KFC/Burger King/Subway gems around the world that prove fast food places don’t just provide speedy service and tasty meals for cheap – some of them rank high in ambience and novelty, too.

So if chowing down on a Whopper while getting steamy in a Burger King sauna, and grabbing a Big Mac in a century-old Venetian style building sound good, then here are 9 unique fast food outlets you need to visit.

1. The world’s most elegant McDonald’s 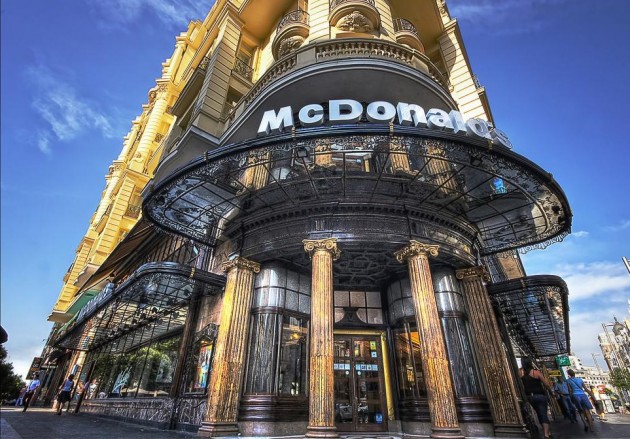 Swanky gold pillars, marble walls, and grand chandeliers that scream “atas” aside, this McDonald’s in Spain also serves up a variety of noms you won’t see in regular Macs outlets. Think yellow arches-certified scones, macarons, and even beer – making it the perfect teatime hangout spot. 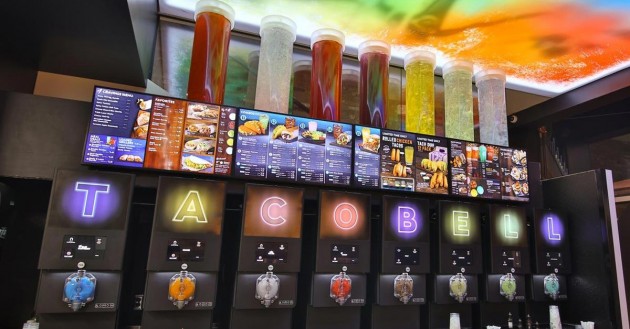 At Taco Bell’s flashy flagship store in Las Vegas, satiate your cravings for tacos and alcohol at the same time. Check out their store-exclusive offerings, like Chilli Cheese Smothered Potatoes, and wash your meal down with a customisable alcoholic Twisted Freeze at the special “Freeze Wall”.

3. McDonald’s in an old passenger plane 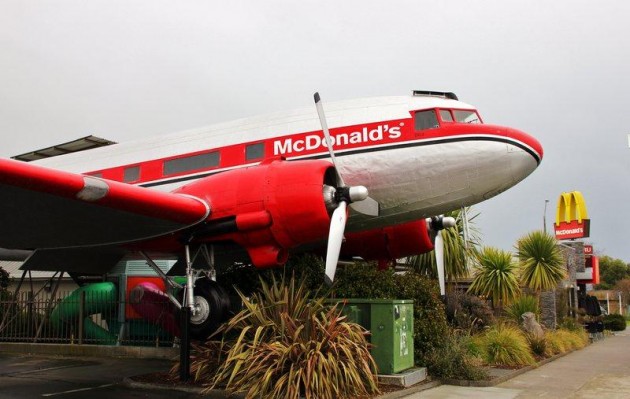 Head over to this McDonald’s in New Zealand for all your burger favourites – inside a retired passenger plane. With the plane’s engines, cockpit and propellers still intact, and over 50,000 hours of flight time under its belt, hopping on this plane is the closest you’ll get to a $5 plane ride. Minus the cotton candy clouds, of course. 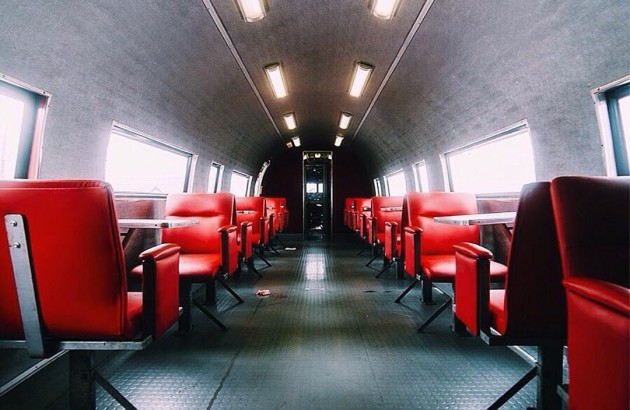 No need to fight for the window seat in this plane! Source: @auroradesign 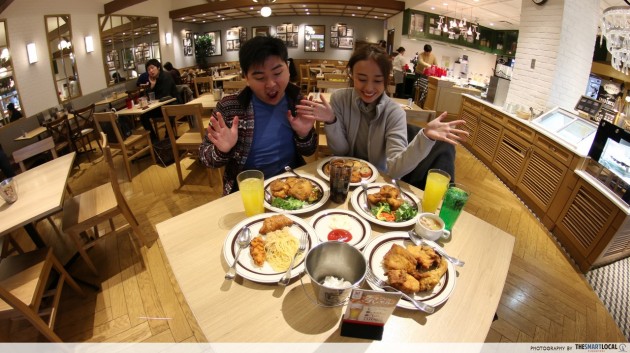 Buffet round 1 of infinity

If even 48724279831 pieces of fried chicken aren’t enough to satisfy your KFC addiction, you need help head to this KFC buffet in Osaka. Serving up over 60 fried chicken items, pastas, soups, and other varieties of food, you can eat till your heart’s – and stomach’s – content here. 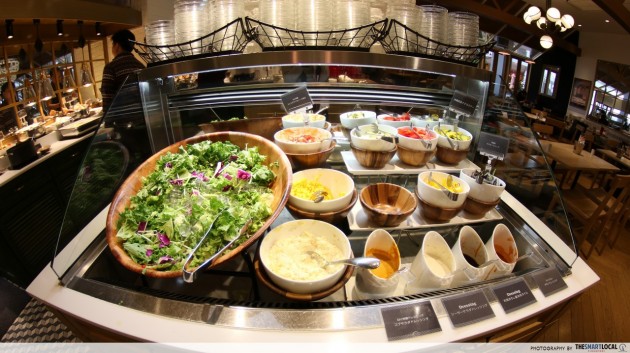 Then end your meal on a sweet note with dessert, or assuage your fried chicken-binging guilt with some fresh salad. If you’d like, top up a small fee for free flow beer – every alcoholic’s dream come true! 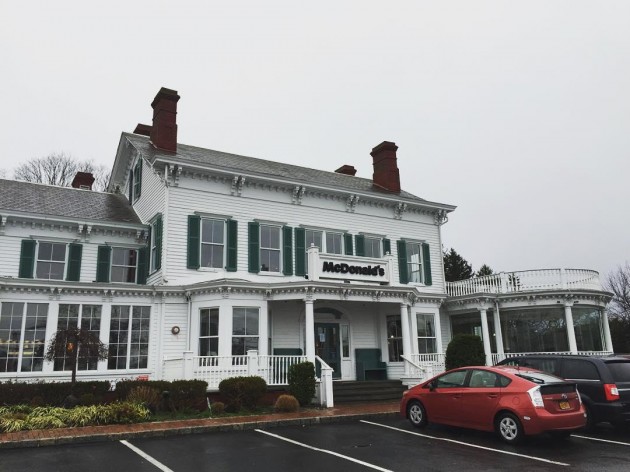 Housed in a century-old Georgian mansion is this McDonald’s outlet in New York that’s #aesthetic goals through and through. 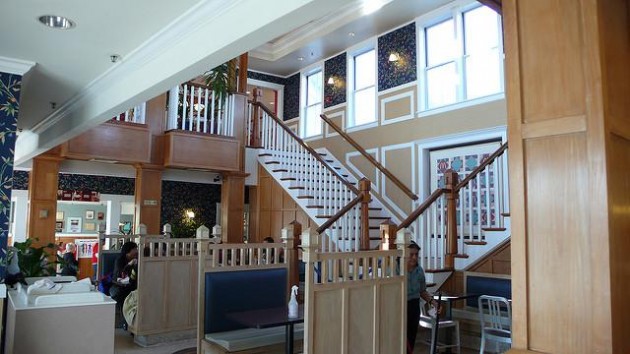 Snack on McNuggets and fries at its glassed-in circular vendara, or head up its double staircase that channels homely vibes with its white/tan colour palette.

Fun fact: this mansion was actually slated for demolition after WWI – until Long Island citizens protested against it. Fast forward 100 years, and we’ve got a Macs outlet so chio, it’s even played host to weddings. 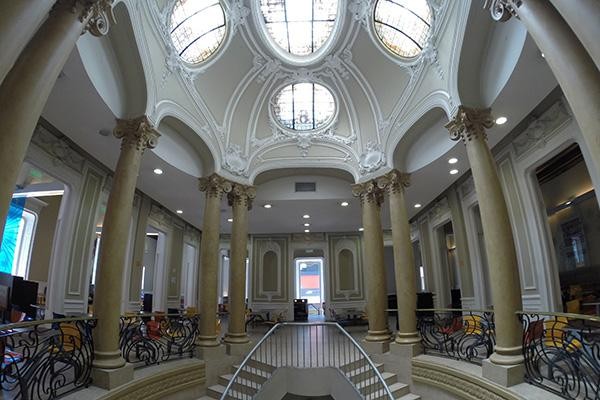 Taking the cake as the world’s grandest Burger King outlet is this one in Bueno Aires. Built in a 137-year-old Venetian-style building, its beautiful leaded glass ceiling panels, towering pillars, and wall murals channel neo-gothic vibes of the old times. 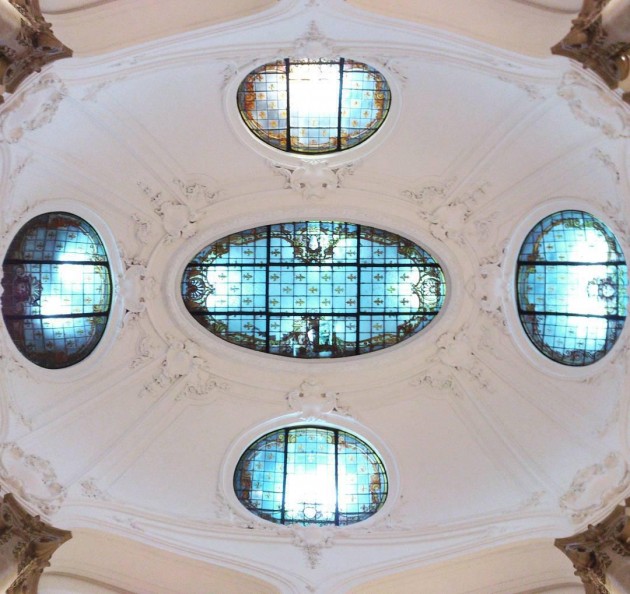 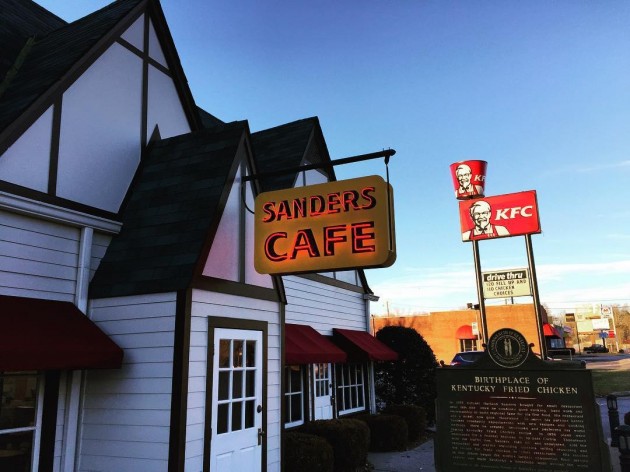 If you’ve been identifying the KFC logo as “the one with the bearded uncle” since your childhood days, prepare to be enlightened at the KFC Harland Sanders Cafe and Museum in Kentucky. 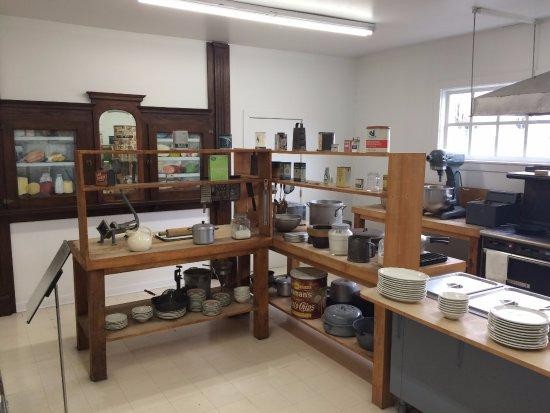 The “uncle” in question is actually KFC’s founder, Colonel Harland Sanders. At this historic KFC restaurant, you can get an exclusive peek into his office and explore the site where he brought the OG fried chicken secret recipe to life.

But the only thing that ain’t a slice of history here are the KFC meals on offer. Devour KFC’s latest offerings after your blast into the past, right in the place that started it all! 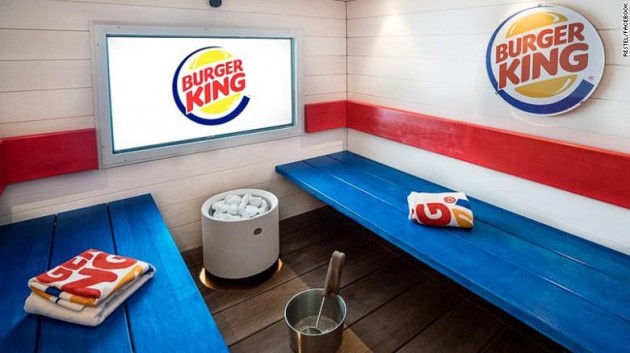 Devouring your Whopper in air-conditioned comfort is overrated. At this Burger King outlet in Finland, chow down on flame-grilled meat burgers as you sweat it out in this unique BK-sauna combo.

And when the trickles of perspiration get too much to bear, approach any of the BK staff on standby to order an ice-cold drink. Then challenge your friends to a PS4 duel or channel-surf on the 55” TV till you’re all refreshed – all without stepping out of the sauna’s steamy comfort. 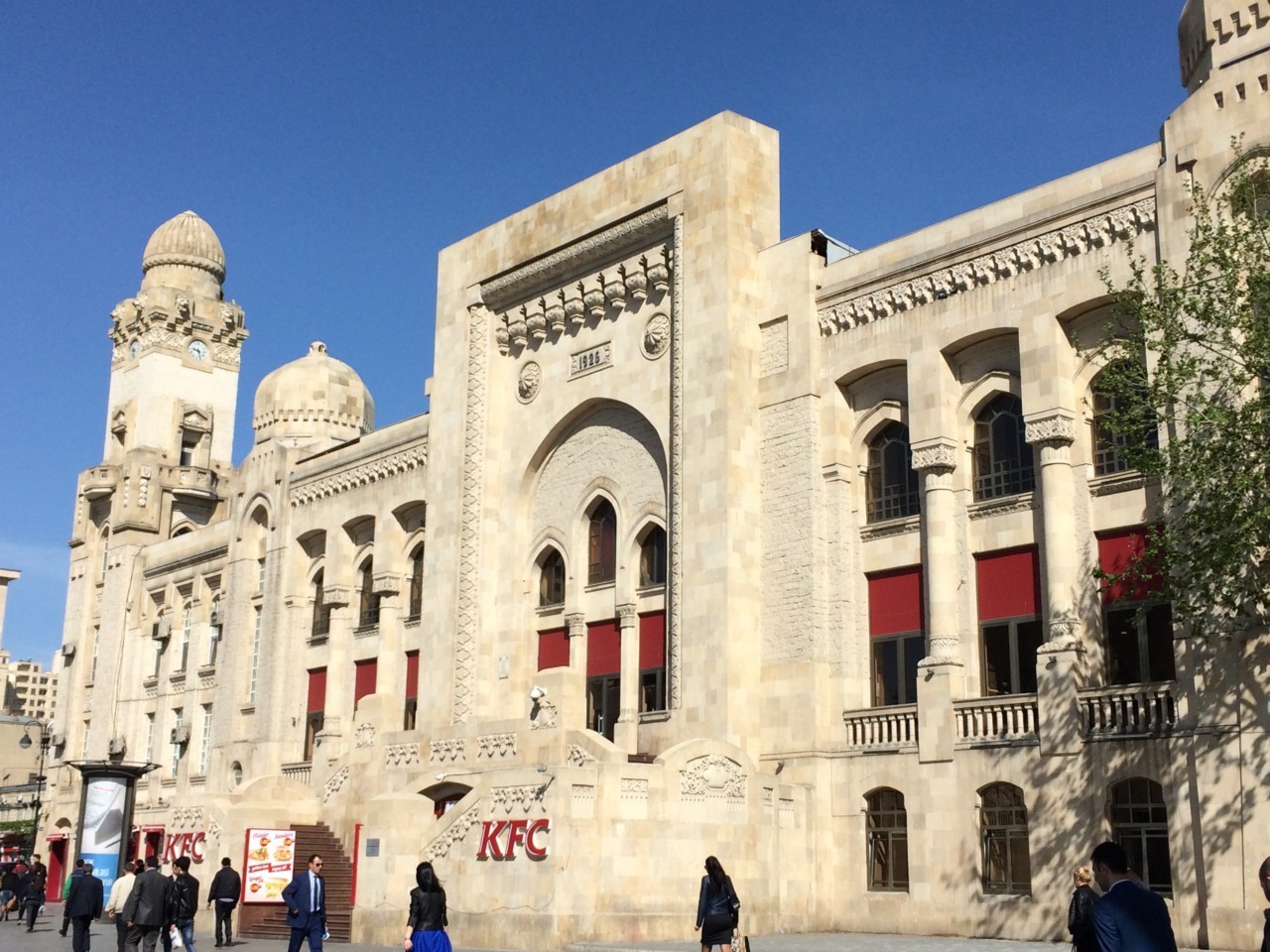 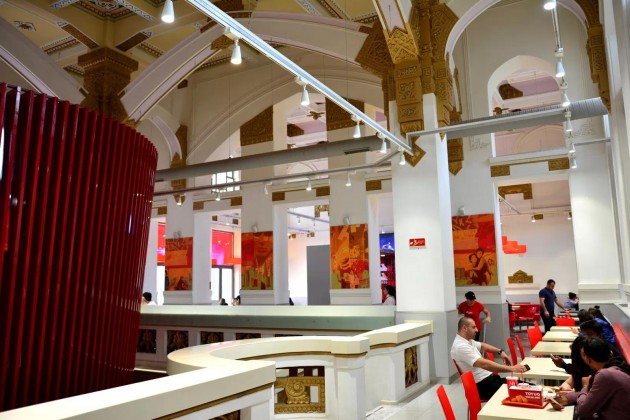 Also the world’s largest KFC, it’s 1600m2 big and can seat a whopping 300 people. P.S. this outlet’s built inside the Sabunchu rail station, which was part of the Soviet Union’s first electrified railway system nearly 100 years ago!

You’re not a true fast food addict unless you’ve visited these coolass fast food restaurants at least once in your life. So to all the self-proclaimed fast food junkies, or anyone looking for a spiced-up fast food dining experience, put these restaurants on your travel bucket list for a meal you won’t forget.