Blacklight: Retribution is a free first person shooter developed by Zombie Studios and published by Ignition Entertainment with a sci-fi look to it very similar to Deus Ex:Human Revolution, a lot of WUB WUB dub-step music and the sequel to Blacklight: Tango Down. This will be my first in-depth review of a free-to-play game alongside an analysis on the game’s micro transaction model considering there has been a lot of controversy surrounding recent free-to-play shooters that adopted the pay-to-win business model. Here is the official gameplay trailer:

For the most part, most freemium games of any nature will usually have an in-game store which will allow players to buy items through either in-game currency or with your actual money. Players who purchased micro-transactions within the game will usually have an advantage over players who wouldn’t have bought otherwise. Games such as Blackshot, Combat Arms, Sudden Attack adapted such business models that playing the game against someone who spend an X ton of money will feel potentially more powerful than you. This is essentially a pay-to-win model, a disgusting unreasonable heretical monetization scheme, the idea of being able to purchase weapons that cause significantly more damage statistically for example. This business model is one which I particularly despise in the industry as it gives premium players leverage over players who did not purchase any items in the store.

What Blacklight: Retribution does is that it does things differently, mainly due to the weapon construction functionality, a rather complex and deep customization feature that involves the ability to buy different weapon parts to form interesting weapon combinations as well as equipment, armors and nodes which is essentially like runes for League of Legends. I say complex because every single item in the game has stats and it is not just a simple direct upgrade from the item type predecessor. From receivers (the main body of a gun), suppressors, scopes, barrels, stocks, magazines, muzzles and weapon tags.

That is one angry weapon tag 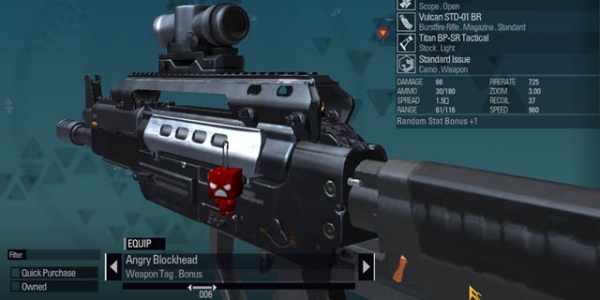 This system shoves a ridiculous amount of statistical data at your face for each individual weapon parts, it adds a lot of freedom and variety to the game’s gun play. Need a bit less recoil?- buy a muzzle that specializes in reducing your recoil at the cost for less range! Feeling a little slow and not being able to pull off lightning fast COD-style melee kills? Get a better stock that increases your running speed but reduces the speed of your weapon’s iron-sight scope in! See what I am trying to say here? Every item has an advantage and disadvantage, this gives each player the ability to specialize in whatever playstyle they are comfortable in and tinker around with different weapon variants.

Even the highest level stock is statistically lower compared to the stock you get at Level 1 in terms of scope-in speed but brilliant in dampening recoil. Players who are turned off by such a system will be glad to know that there are premade weapons available. Items in the game can be purchased with GP (their in-game currency) or ZEN which is basically redeemed using real money. Another feature that I deeply appreciate is the ability to rent weapons for a short period to test out what it actually feels like for a small amount of GP before you fully commit yourself to buying a weapon. This gives the player an immense amount of flexibility and affordability. You also have the ability to purchase Heroes, which are characters with fully equipped competitive loadouts with different character models for cosmetic aesthetic. You’ll look prettier than the other nutters gunning each other down, I promise.

So I actually went to purchase the Sniper Kit pack on Steam for SGD 17.00 a few months ago and I suppose I should take this opportunity to showoff what premium packs has to offer. This pack includes: (as stated in the store page)

“I wonder how all these lights aren’t blinding my vision” 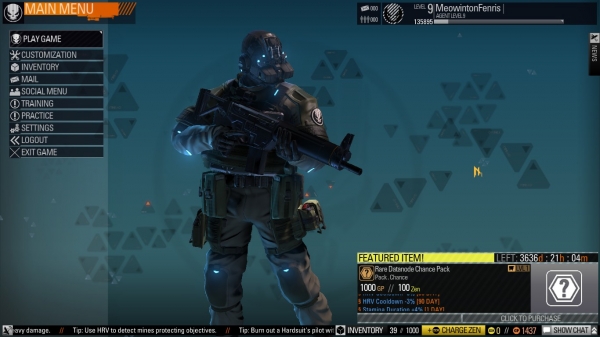 Now bear this in mind, you can unlock all these items in the game through GP anyway. Though it takes a significant amount of GP and not to mention a lot of game time required to accumulate that many GP to purchase the items permanently. Every item in the game can be purchased using a number of options that can best cater to you. You can either purchase an item permanently for quite a hefty amount of GP or you can rent it for a fixed amount of days.

The options for buying an item are:

With that kind of money put down for the premium Sniper Kit on a free game, one would initially expect to be far more superior and absolutely ANNIHILATE the buggers gunning around with their basic default character model. Boy, was I wrong. I mean sure, I may feel and look different from the other players with their automatic assault rifles while I snipe away with my shiny new Bolt-Action Rifle but I never truly felt powerful- and that is good thing. The most significant item I got from the Sniper Kit is the HRV Blackout MK.1 Tactical Equipment. Besides having a very long and badass sounding name, this item lets you cloak your presence from enemy HRVs which is very game changing in terms of tactical approach. What is a HRV (Hyper Reality Visor)? I will soon cover that functionality in the game mechanics bit.

For the vast majority of it, the business model appears to be reasonable and evidently not pay-to-win. Blacklight Retribution comes across as having a fair playing field for all players regardless if they purchased premium items or not. This not only prevents the game from splitting the community into first and second class citizens, it most importantly prolongs the game’s lifespan and keeps the game balanced without having to worry about your opponents shooting at you with gold plated assault rifles with +5 damage.

Moving on, lets talk about the actual game mechanics of Blacklight: Retribution. It is a pretty looking game to be honest, it doesn’t have the graphical fidelity of any of the Crysis games but it is arguably comparable to AAA titles.
This guy obviously doesn’t understand the concept of sniping 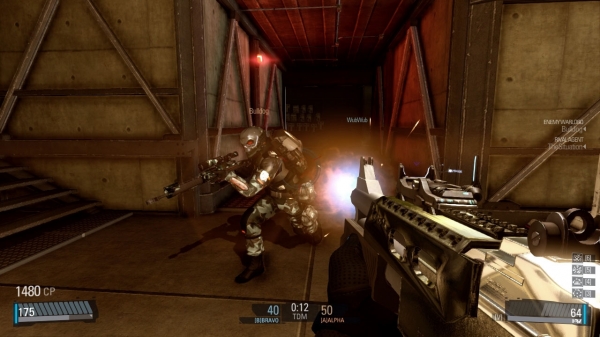 The gunplay feels very responsive and plays pretty smoothly in Blacklight: Retribution. Shooting and connecting a bullet to an enemy rewards you with a satisfying COD-esque ‘click’ sound and an indicator will show that you shot that bugger alongside your crosshair. Overall the combat in this game doesn’t do anything revolutionary aside from the mindless shooting but it adds some interesting twists to make up for it. Much like the traditional kill streak system first introduced in Call of Duty: Modern Warfare, instead of awarding players with instant air strikes and nukes by eliminating opponents consecutively without dying, the game rewards you with Command Points for doing almost anything that helps the team progress. Killing enemy soldiers is probably the simplest way of gaining CP but also capturing objectives, securing the flag and even reviving your team mates with the Revive Injector. The most important attribute of Command Points is that it is persistent, it will not reset upon death. This gives you the ability to accumulate enough CPs to make strategic decisions.

So what do command points do? These points allows you to buy items from Weapon Depots scattered around the map. It can be a simple health restore (health do not regenerate), ammo refill, flamethrower weapon, deployable auto-turrets and a few other powerups but most dramatically- a hardsuit. So what’s a hardsuit good sir? Oh, nothing important really, just a huge stompy mech-robot armed with a minigun on one hand, afterburner thrusters to rapidly cover some ground and a railgun that send enemy soldiers ragdolling across the map. That all sounds incredibly overpowered to say the least but there is a risk in calling out of one these mechanical badasses. To obtain a hardsuit, you have to purchase a target painter from a Weapon Depot for 1300CP, point your laser and print it on any flat surface in an outdoor area and quickly pilot the damn thing before an enemy sneaks up and hijacks your hard earned hardsuit! (Did I mentioned that you can ram foes with your hardsuit’s oversized metallic shoulderpads?)
More cream for your coffee, sir? 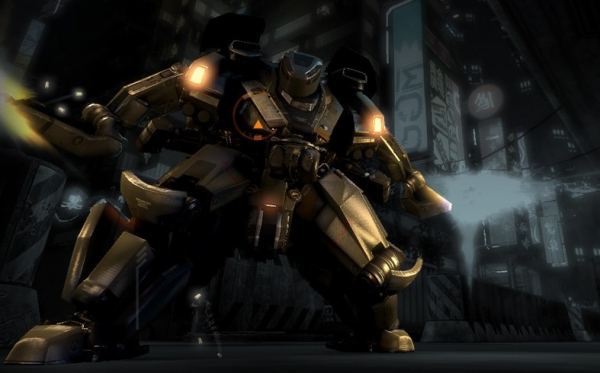 Don’t feel too comfortable once inside your hardsuit though, by using the HRV your enemies can spot weak points in your hardsuit infrastructure and focus fire on your Achilles heel. Weak points for the hardsuits are randomly generated each time you call down a hardsuit so don’t get too cocky firing at the same spot for every hardsuit you encounter. Another effective technique to bring down these sons of cogs and gears is by equipping yourself with a Flamethrower or the RL5 Armor Stinger from any Weapon Depots with the latter specifically manufactured to punch a hole or two in these mechanical beasts.

So what is with all the big hoo haa about the Hyper Reality Visor (HRV)? It is essentially a tool that allows you to ‘wall hack’ and I use the term wall hack very loosely. By pressing your V key, your player character will tap his vision into the matrix, no really. You will be able to see through walls to spot enemies and important locations on the map like the many Weapon Depots. But by using the HRV, you will put yourself at a disadvantage and render your weapons unusable during the process of detecting your enemy locations and leaves you vulnerable to enemy fire. 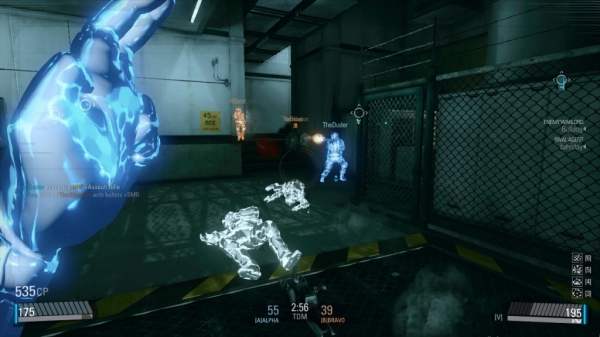 There are a number of traditional and non-traditional game modes in Blacklight: Retribution. From the traditional Deathmatch, Capture The Flag, King of the Hill game modes to the inspired Team Fortress 2 Payload game mode titled Siege as well as the recently added Onslaught mode which introduces Zombies to the Blacklight universe.
Siege mode isn’t just a total rip off of Payload, it actually has substance. The ever innocent looking cart from TF2 has been replaced by a stompy intimidating looking Scorpion Tank pilot-able by players which will fire at you if you are within range and it’s line of sight. This change adds dynamic and flow to the dramatic tug of war nature of the game mode. My favorite game mode however has got to be Kill Confirmed which was inspired by COD’s Modern Warfare 2. The goal of Kill Confirmed is to reach a certain number of points before the enemy team does, it’s an arms race. The interesting notion is you don’t actually gain points just by killing an enemy solder. Instead, you have to kill the enemy soldier and THEN run over to his body to collect a floating skull icon which is worth one score, staring into your soul. Nom nom, who knew those skulls tasted like candy?

I believe I have pretty much covered most if not all the game has to offer, so to sum this review off, I have to say that Blacklight: Retribution has exceeded all my expectations as a free-to-play first-person-shooter. From a business perspective, it has excelled at balancing the game with it’s business transactions model being fairly reasonable and overall impressive as it could have easily became just another typical pay-to-win cashshop bonanza. The gameplay feels fluid, combat is responsive and tactical but for the most part they nailed the most important aspect of a video game. It is genuinely fun and it provides a satisfying experience with constant free content updates from the developers.

Ultimately I would happily give this game a game score of:

Here is the new Onslaught trailer.