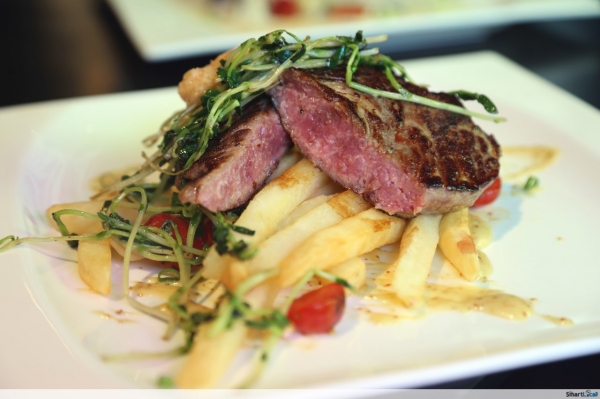 When I was first headed down to Beer Market, I wasn’t sure what to expect. Beer Market has always being on my radar ever since I heard of their innovative Beer Market Exchange concept which works like a stock exchange. Customers are encouraged to “Buy Low and Drink High” and alcohol prices changed every half hour. It was a cool concept never seen before in Singapore. 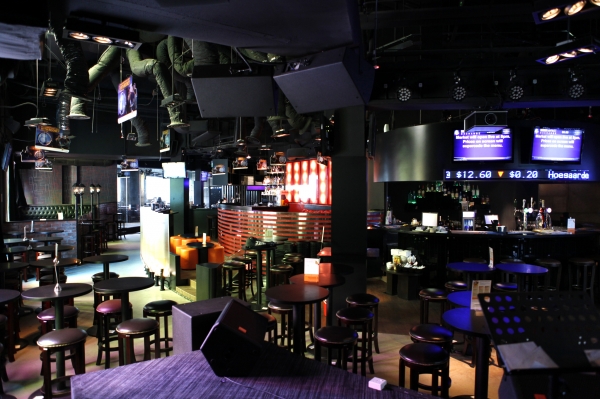 However, I am not big on alcohol and the thought of downing glass after glass of booze does not exactly appeal to me. I found out soon enough though, that contrary to its name, Beer Market doesn’t revolve solely around Beer. Even light drinkers are going to be in for a pleasant surprise.

Beer Market located at Clarke Quay, is committed to providing you three things – Good Beer, Good Fun, and Good Food. I know you’ve probably heard this a thousand times but Beer Market does it in such a remarkable manner that will make this your new favourite hangout spot. 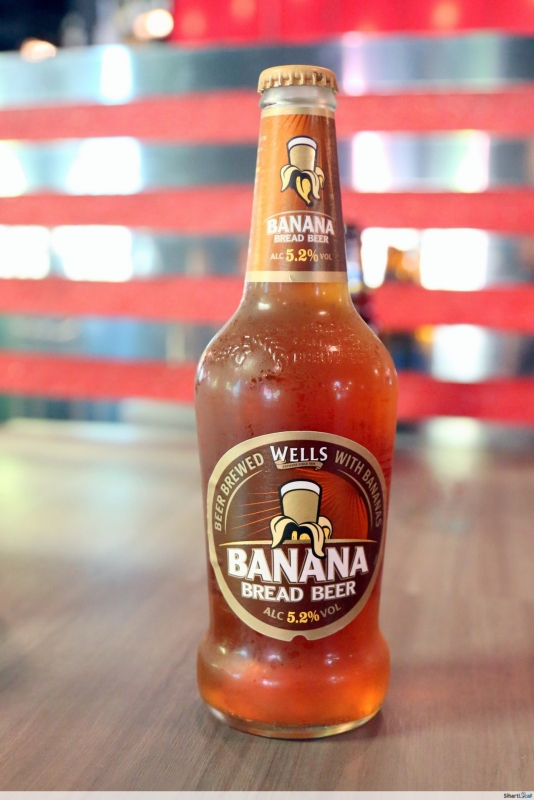 Beer Market sells a myriad of beers ranging from the classics, the favourites, to the rarer few. They have been curating the best beers in the world from as far as Italy and Belgium and making them available at Beer Market. They have Fruit Beers like Wells Banana Bread Beer ($18) and unusual brews that caught my attention such as their Matso Chilli Beer ($17).

There is undoubtedly something for everyone on their comprehensive beer menu.

It’s a different experience you’ll get from any bar in Singapore because almost all Beers at BM are listed on the Beer Market Exchange (BMX), projected onto the TV screens. Just like how the Stock Market functions, the prices of beer are regulated based on the supply and demand of the particular beer you wish to order. The higher the demand, the more expensive it gets. Prices of beers on the BMX are updated every half and hour.

So this is where the fun starts rolling in. Just like how the property market crashed, the BMX does crash occasionally too. When the long-awaited crash finally arrives, grab your friends – You’re in for a night of good fun, good food, good beers, AND excellent prices. 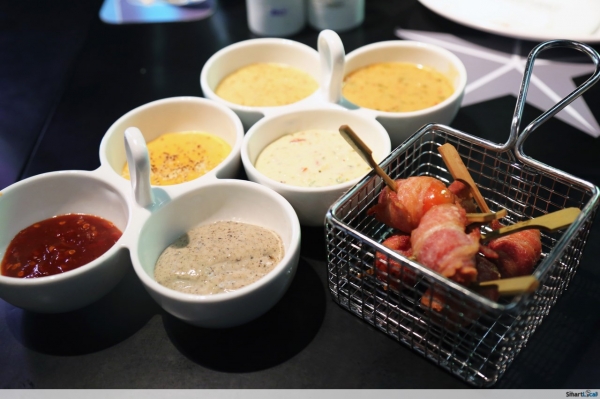 Beer Market had just come up with a revamped food menu that we were excited to try. Our expectations were high and we were curious to see if their menu would be as fun and innovative as their concept.

We started with the BM Rojak Platter ($39.90). This massive platter consists of a bit of everything – fries, spring rolls, Japanese sausages, mushrooms, Thai fish stick, luncheon fries, and fish skin. It offers more variety than the standard pub grub, but what really sets this apart is the array of sauces that accompany the platter which are just amazing. Get this and you’ll be experiencing intense mouth-gasm like us right from the start.

These sauces are specially home-made, with our favourites being the BM Shiok Sauce and the BTH sauce, short for Buay Tahan (which literally means “cannot take it” because its so hot). The BM Shiok Sauce was zesty with a twinge of spiciness, with a recipe such a closely guarded secret that we weren’t even told of the ingredients. The BTH sauce was not as scary as its name suggested, but was named as such due to the spiciness of the sauce. 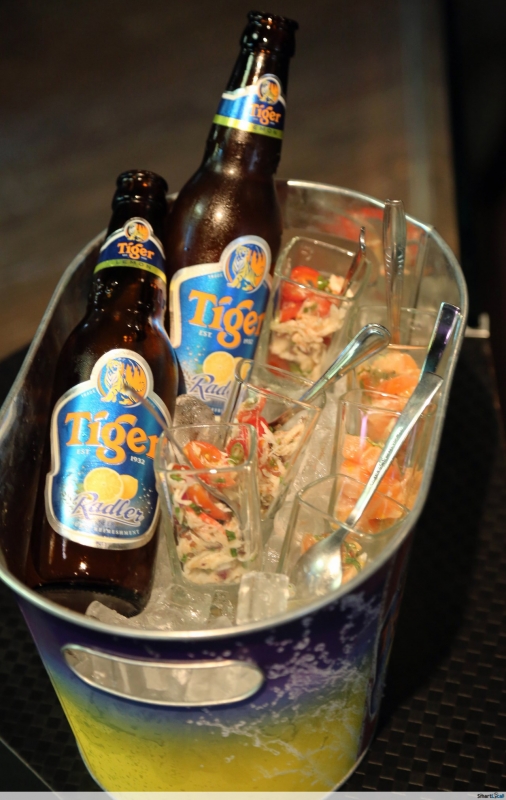 Another highlight of Beer Market is their Seafood Shooters ($22.90). This encompasses thick chunks of Salmon Sashimi drowned in shots of Tiger Radler, followed by succulent Tiger Prawns and lastly, Crabmeat presented in the same manner.

It’s really clever to use Tiger Radler as this lemon flavoured beer adds a zesty flavour to the shooters. 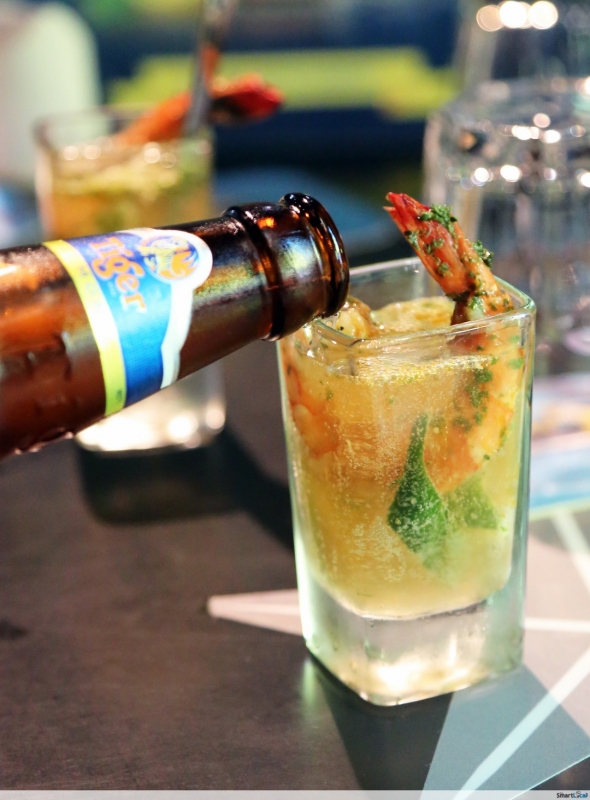 Man, this was such a killer combination. If I had to pick my favourite, it would be the Salmon Sashimi. Just imagine – chunks of fresh Salmon Sashimi marinated in whiskey, tangerine and other secret spices before being drowned in booze. It was such as unique party in your mouth experience. 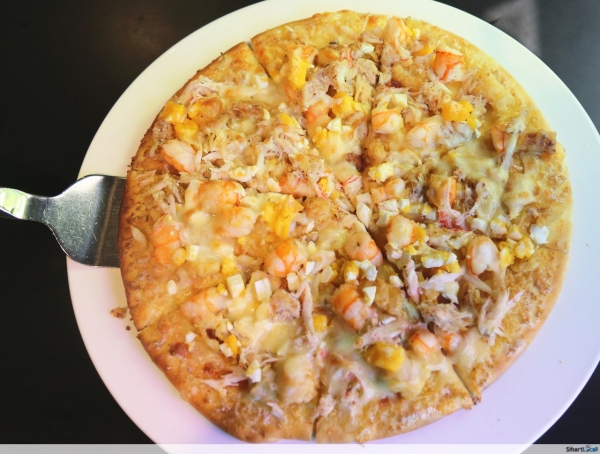 Another unique selling point of Beer Market has got to be their fusion cuisines. Just the mere thought of them makes me salivate as I type this out.

For all the thrill seekers out there, go ahead and savour the taste of Salted Egg Seafood Pizza ($21.90), and the Chicken Rice Pizza ($17.90) – Singapore’s #1 local dish served on a pizza down to the rice grains and pieces of roasted chicken. 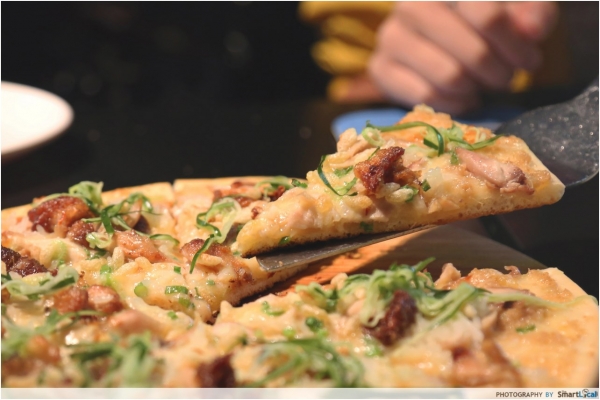 This new creation was so ingenious I was mildly mind-blown when I first laid my eyes on it. My only disappointment was upon realising that there was no Chicken Rice Chilli Sauce to accompany the Pizza, which could’ve had reinforced the authenticity of the Chicken Rice Pizza.

Nevertheless, these pizzas are a huge hit with the beer guzzling crowd here. 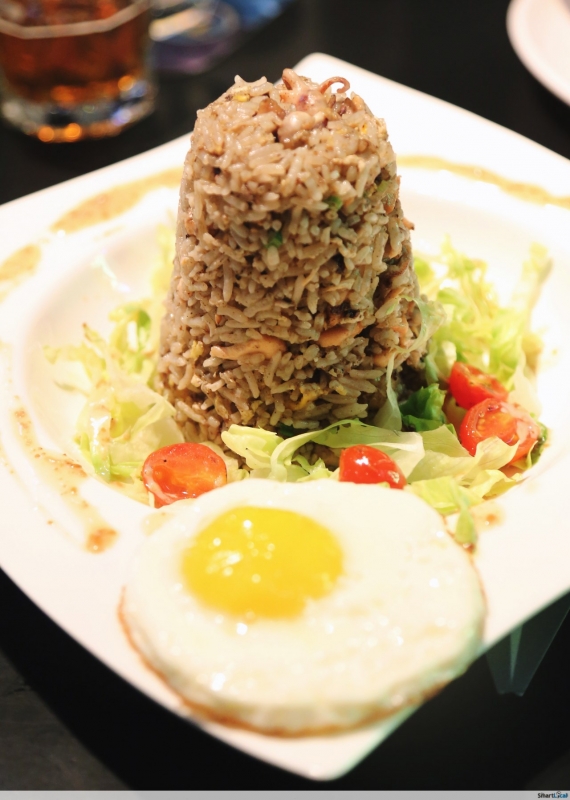 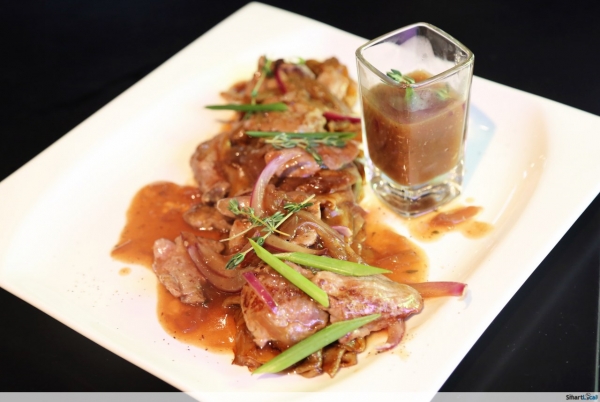 While the former was a welcoming breather away from the usual Squid Ink Pasta, the BM Beef Horfun did not sit well with my taste palate. The French Onion gravy was overtly sticky and overwhelmed the taste of the Beef Horfun and accompanying wok taste which I look out for in Horfuns. 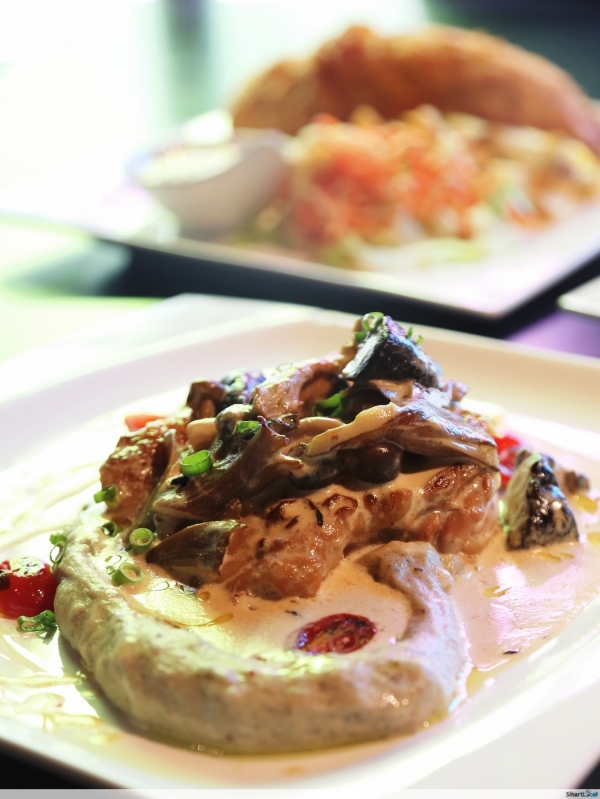 For those of you Western fanatics, Chicken Truffle ($15.90) was my favourite Western main because I’m a huge fan of Truffle-infused food and the Truffle was very evidently infused into the mash till perfection for this dish. Other choices include BM No-nonsense Steak ($22.90) Sizzling Salmon ($18.90), and Grandma’s Fish and Chips ($13.90). 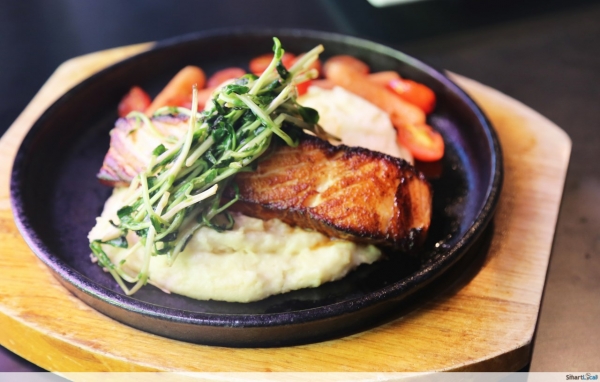 To sum it up, were served a delightful amalgamation of comfort food that brought out the flavours and displayed the impressive skills of Chef Steven who has been in the F&B industry for more than 20 years. Whereas most bars get lazy when it comes to food and just serve the standard bar food, the quality here was significantly higher and definitely more innovative.

I cannot pinpoint exactly why I love Beer Market, perhaps it’s because the image of thick slabs of sashimi infused with Tiger Radler has been stuck in my mind ever since I devoured it (yes, it was that fantastic), or maybe because of BM’s unique marketing concept that encompasses the BMX and fusion food a la Chicken Rice Pizza.

Whatever the case, after having tasted their food and talking to Chef Steven, I see so much heart and soul being put into creating these tantalising food, cooked nearly to perfection, that I must say Beer Market is really that special place you have to try for yourself to understand.

Food, Fun and Beer- Everything seems to fall perfectly into place here. 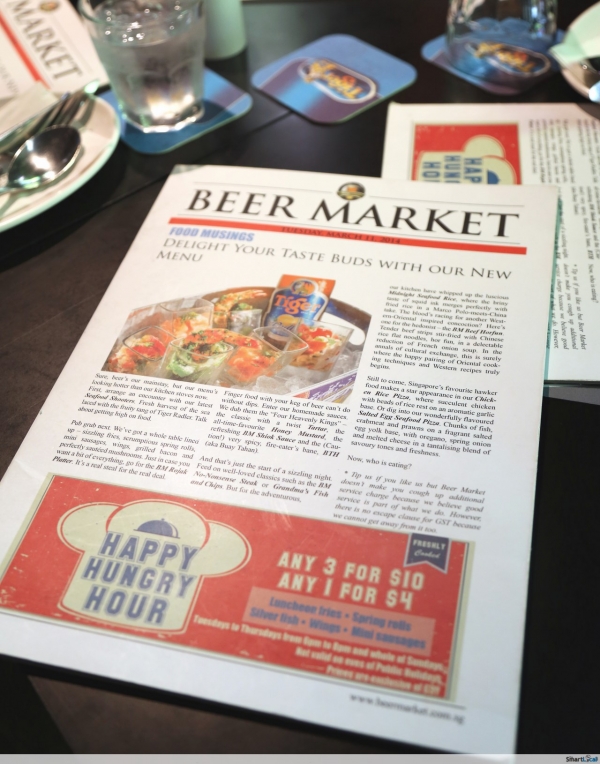 This post was brought to you by Beer Market.

0
SHARES
ShareTweet
Shakespeare in the Park, Merchant of Venice Review
17 Deadly Sins that stop you from doing work