About SRT’s Merchant of Venice The Merchant of Venice is the story of Shylock, a Jewish money-lender in a Venice that was still rather anti-Semitic, and his saga against Antonio, a Christian merchant. Antonio borrows a large sum of money from Shylock on behalf of his good friend Bassanio who wishes to woo the beautiful Portia but is rather lacking in the money department.

Shylock agrees but strikes a deal with Antonio stipulating that should he fail to pay the principal back, he should be allowed to have a pound of Antonio’s flesh, to which Antonio agrees.

I’m not going to spoil the rest of the play for you but you can imagine what happens. This play is credited for some of Shakespeare’s most famous dialogue like Shylock’s “Hath not a Jew eyes?” and Potia’s “The quality of mercy is not strained,” speeches. Shylock is also one of Shakespeare’s most sympathetic villains and you’ll probably find yourself confused about why you feel so bad for him.

What really made this play for me was the cast. Made up of seasoned actors, their delivery was not only eloquent but underscored with emotion and believability, something a lot of actors struggle with when it comes to Shakespeare. This is due to the complexity of the language which is sometimes difficult to translate to the audience.

Of the cast members, Ramesh Panicker’s portrayal of Shylock, as the Jew scorned by Christian mistreatment, was most impressive. Although he has just returned from a five year hiatus, don’t expect to witness a rusty performance.

He managed to capture our sympathies throughout the play and I remember remarking countless times “Damn, I really want to give him a hug.” Even more impressive was the fact that he performed the entire play with a bad leg but then again, I think the limp combined with the fact that he looks a little like your grandpa definitely would add to the sympathy you’d feel for him. 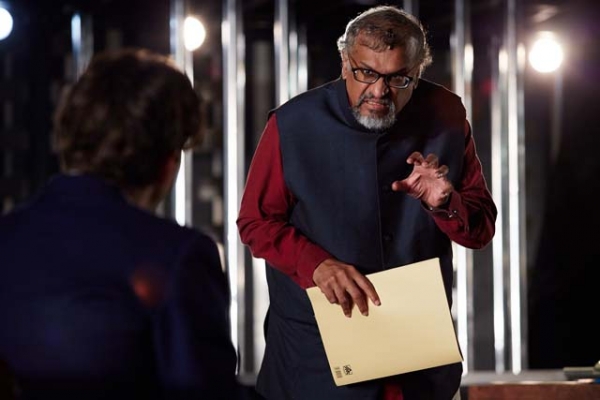 Another stand out cast member was Julie Wee, who plays the quick-witted Portia. Her performance was nuanced and perhaps its fact that she’s completely gorgeous but we found it hard to take our eyes off of her. The production was meant to be modernised in the sense that it is set in the present-day with CBD-esque LED lights in the background and iPods and iPads popping out everywhere. However, I honestly felt like it could have been used much more effectively.

Perhaps due to the fact that the entire play stuck to the original Shakespearean dialogue, the modern day theme seemed to be super-imposed on the play rather than seamlessly integrated in. I think sticking to the original context would have served the play much better although the pop culture references did lead to some chuckles from audience members.

Its rare that theatre is such a “chill” and laid-back event with there being no need to be fancily dressed or to maintain a high level of decorum. In fact, I found myself very shamelessly LOL-ing throughout the play and there were countless people who were lying down on the mats and you could tell they were all really enjoying themselves.

We did find ourselves caught in a bout of rain in the first act but the actors did not falter and audience members remained unphased. If the fact that people were willing to sit in the rain to enjoy the play isn’t testament to how much they were enjoying it, I don’t know what is.

Word of caution though, there aren’t many signs pointing you in the right direction so give yourself time to get a bit lost. We were roaming around Fort Canning for a good twenty minutes asking people “Do you know where you’re going?” to which they responded, “Oh, we were following you…” Not the most pleasant experience.

Shakespeare in the Park is one of those events that just gives off a lot of good vibes, so I say, grab your favourite bottle of wine and some sandwiches and head down to Fort Canning for a great night. If it gets warm or you sweet tooth is screaming, there’s a Haagen Dazs booth on site where you can get amazing ice cream to make the night even better. We tried their new flavour, Caramel Cone which is caramel ice cream with caramelised almonds and chocolate coated waffle cones. It was simply divine and added the finishing touch to a splendid evening.

Also note you can get 10% off all ticket bookings to Shakespeare in the Park: The Merchant of Venice from May 1 to 22 when quoting this pass code: HDMERCHANT2014, during purchase at SISTIC.