Going back to school at 30

If you’ve ever thought about making a mid-career switch, you’ll know that the idea can be quite intimidating. After years of being in an industry you’ve grown comfortable in, you might be clueless as to what you’ll need to do to get into the line of work you want to be in.

That’s how Wong Yu Hao felt three years ago when he decided that he wanted to move on from his technical role in IT. So, at 30, he decided to take a leap of faith and pursue the one career he had always wanted: marketing. This is how he turned his dreams into reality as he headed back to school.

Yu Hao had been an IT support specialist for about five years and although this is an in-demand job role, he felt that his passions lay elsewhere – marketing. Besides, it was what he went to school for and earned a bachelor’s degree in.

Yu Hao had a goal in mind but wasn’t sure how to go about achieving it. But as fate would have it, he would find his answers at Lithan Academy, an institute for working adults to upskill themselves through a wide selection of IT and digital skills such as cybersecurity, data science, artificial intelligence and digital marketing.

With a marketing degree under his belt, Yu Hao could have easily jumped straight into the job search for a relevant role. But after being in the workforce for nearly 10 years without using any of his marketing knowhow, he didn’t feel confident enough to apply for such positions.

Not to mention, a lot of what he learnt a decade ago would be outdated today – a pretty big hurdle given the fact that he was specifically eyeing a role in digital marketing.

His friend who went through a similar experience then convinced him to try out career counselling at e2i, a networking service that helps individuals with career planning.

“The career consultation was free of charge, so I thought I could at least hear their opinions and what resources they offered,” he said. 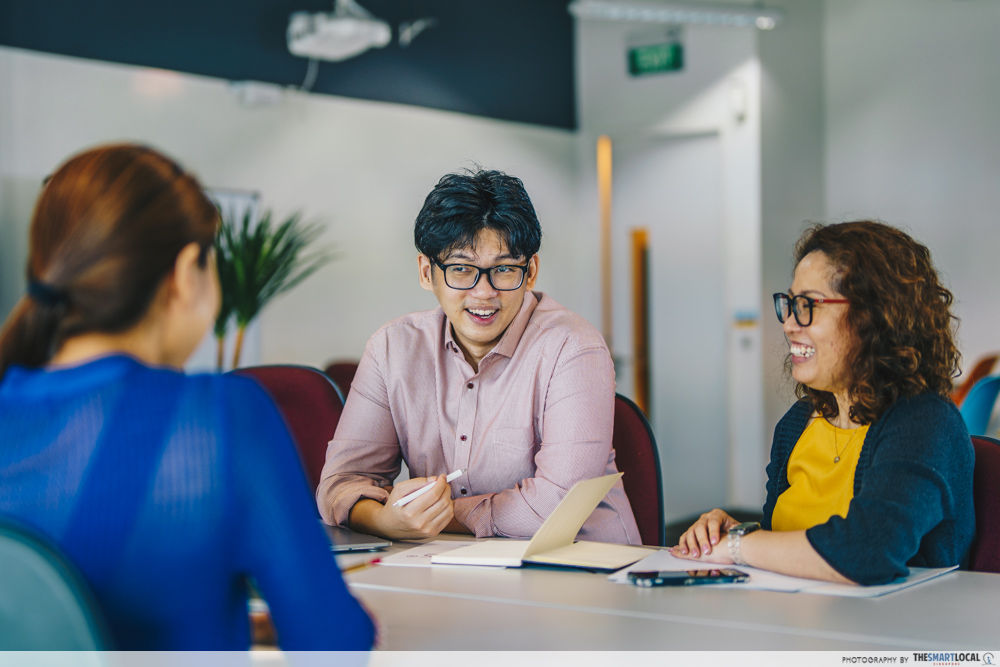 Yu Hao (centre) met up with the course consultants at Lithan Academy who offered him advice on what course to take to reach his career goals.

Yu Hao went into the consultation with an open mind. After much discussion on his goals and aspirations, the career planner agreed it is best for him to further his studies in digital marketing. His reasons were that he needed to keep abreast of the latest developments in such a field, and a professional certificate would help give his resume a boost.

The career planner then linked him up with Lithan Academy, where he was connected with the course consultants. They were able to speak to him on courses available, while also advising on possible career paths with their in-depth industry insights.

Their ability to share on future trends in the marketing industry further reaffirmed Yu Hao’s decision that heading back to school was the right choice.

After hearing about the courses offered at Lithan Academy, Yu Hao was most intrigued by the part-time diploma in digital marketing, which would allow him to work and study at the same time. 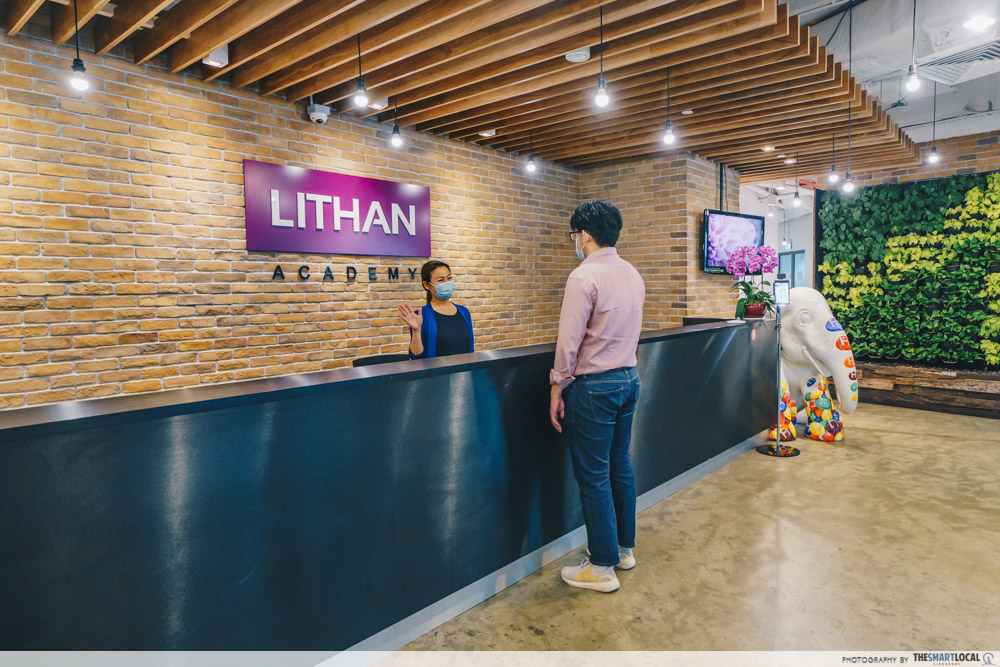 Another perk the school has was the blended learning structure, which is meant to help students maximise time efficiency and their learning. They go through self-paced learning then placed in flipped class training where lecturers focus on the weak points of each student. Plus, there are mentoring sessions with industry practitioners so students can get their hands dirty putting their newly-learnt skills to the test by executing real world projects.

As Yu Hao could only spare time on his weekends due to the nature of his work, he thought that this method of studying best fit his schedule.

And so, his journey as a 30-year-old student began.

Anxiety about returning to the classroom 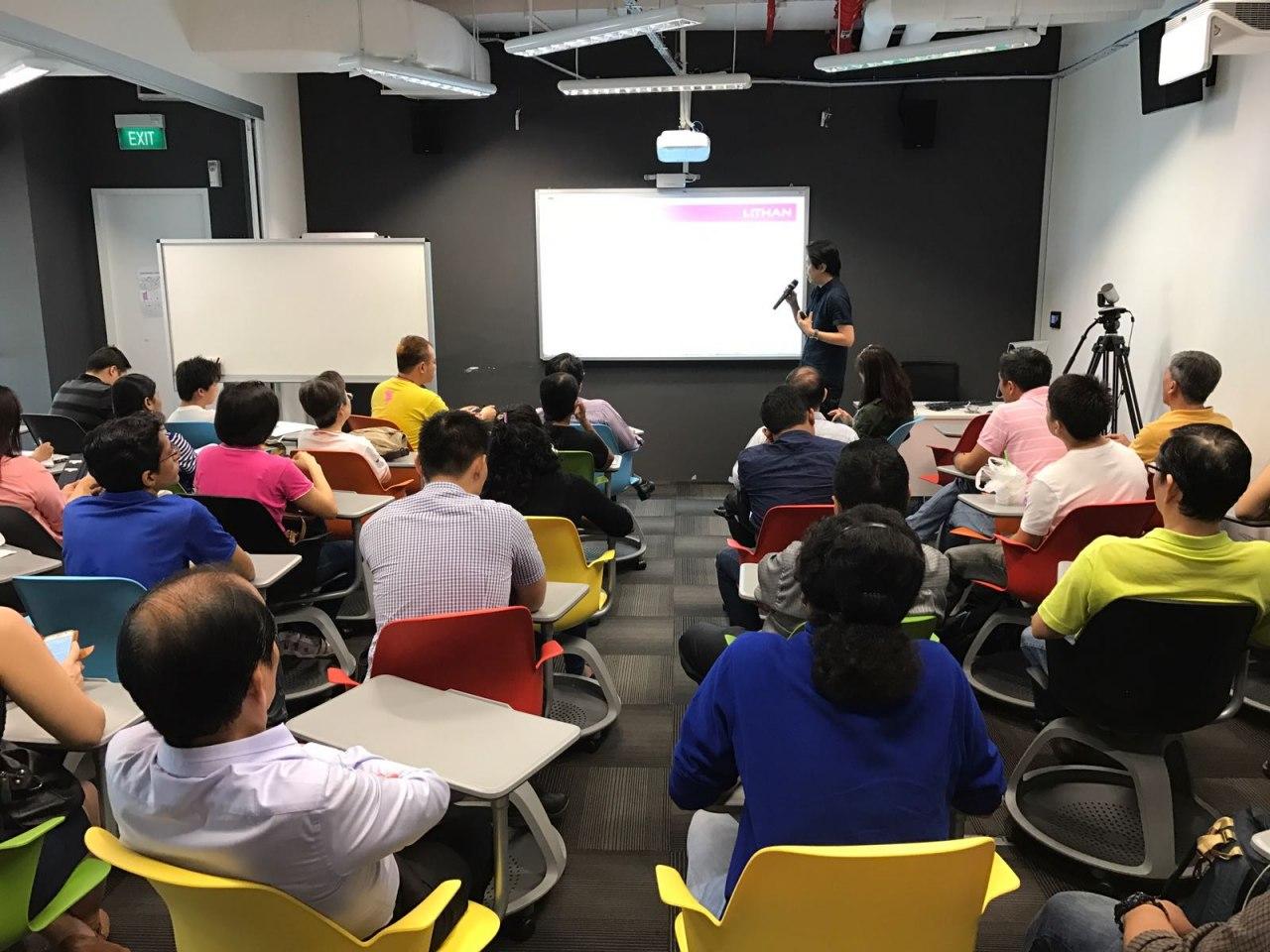 Yu Hao had trepidation about returning to school at a later age. He feared he would be one of the oldest in the class, and wouldn’t be able to jive with schoolmates.

Surprisingly, he was one of the younger students in his class. “Most of my classmates were already in their 40s, and were looking to gain new skills to remain relevant in the workforce,” he shared.

Yu Hao also found that his work experience was actually to his advantage. He was the one older classmates would call on for help when they faced IT difficulties, especially when classroom learning shifted to virtual classes because of Covid-19. As the designated IT support guy, Yu Hao felt that he was able to form friendships with his batchmates easily.

Before the learning started, Yu Hao was quite confident that he would be able to juggle work and studies at the same time with the blended-learning structure. 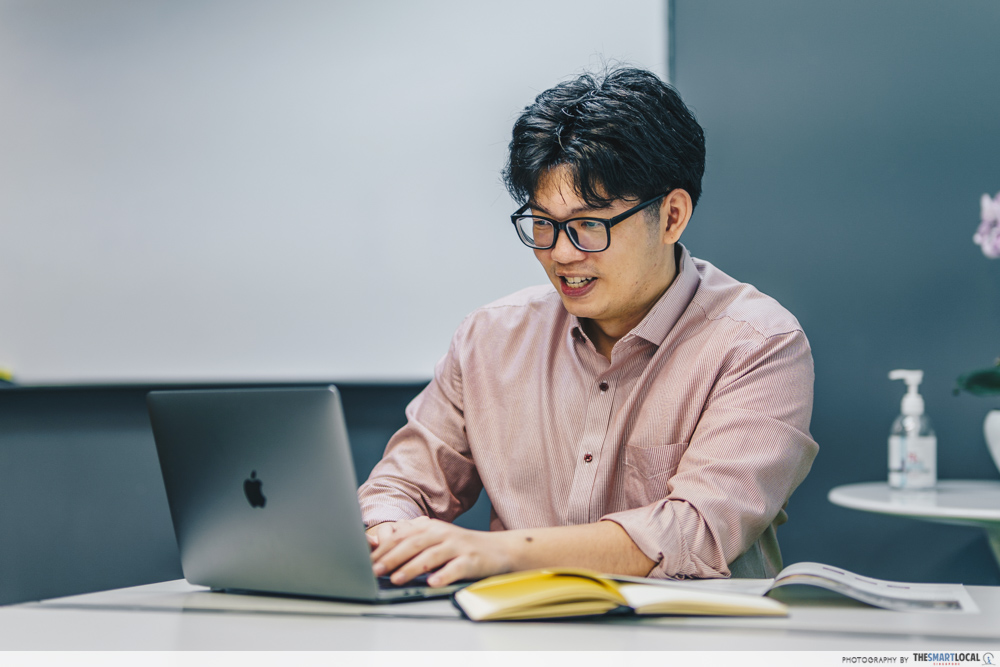 But the reality was a little more challenging than he anticipated. The blended learning setup helped to cut down a significant amount of time spent in the classroom. But Yu Hao had to be extremely disciplined, for one, forcing himself to be more kiasu with addressing study materials ASAP so that he wouldn’t lag behind. He would make notes as he went along, highlighting areas he wasn’t sure of so that he could raise these questions in class.

“There were occasions when deadlines for both work and school overlapped,” shared Yu Hao. “My personal time was affected. I chose to skip out on family dinners and outings with friends. I didn’t have much time to exercise either.”

Turning to virtual learning during a pandemic

Adjusting to a new life that included work and studies was one thing, but life threw Yu Hao another curveball – online classes due to the pandemic. He only managed to attend two on-campus classes before everything shifted online.

Without the face-to-face interactions with his classmates and lecturers, Yu Hao was sceptical about being able to have a proper learning experience for a course as demanding as digital marketing. 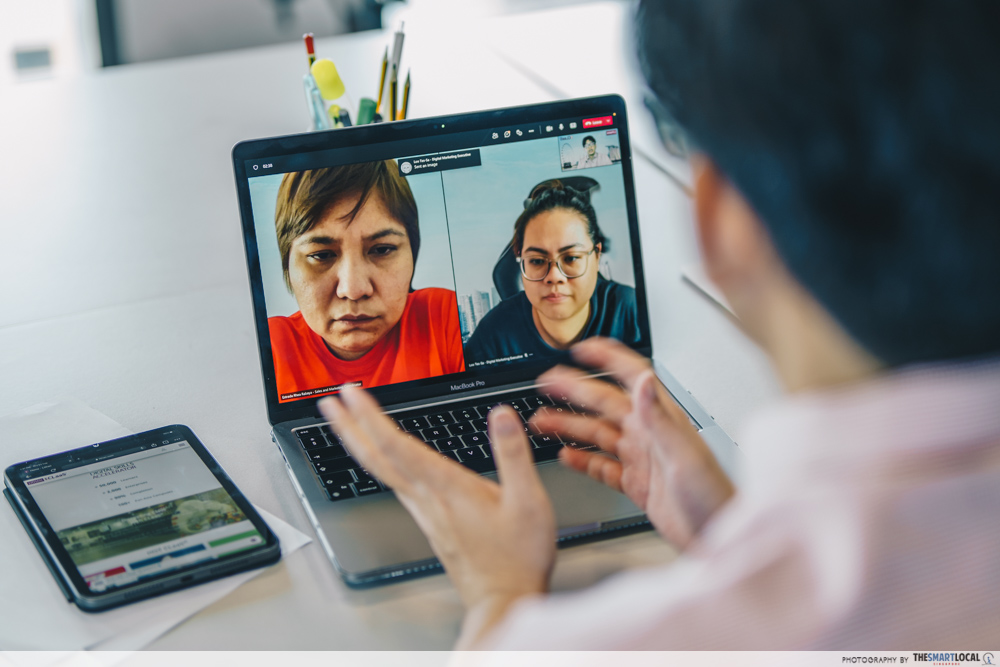 But he was pleasantly surprised to learn that he was still able to have quite a hands-on experience during his classes. Even through video conferencing, the lecturers were able to keep discussions vibrant. Their assignments also involved real digital ad campaigns, where they learnt to use tools like Facebook and Google Analytics.

Yu Hao credits the lecturers at Lithan Academy for ensuring his class got to make the most of their time during the course. “The lecturers understood that most of us were working full-time and didn’t limit us to regular office hours for asking questions,” he said.

“We could check in with them any time for help on the assignments, and they were always patient in their teaching, so that we would be able to understand everything fully.”

One of these lecturers is Mr Azhar, whom Yu Hao had spent considerable time speaking to him not just about assignments but of the industry as well.

“Mr Azhar was forthcoming and honest with his knowledge of the industry, and provided us with many resources even outside what was already provided in the course. He even helped build our portfolios, so that we could have something to show prospective employers tangible examples of what we had learnt in the course.”

Till today, the two regularly text each other about developments and trends in digital marketing, and even meet up for meals when they can.

Yu Hao spent six months in this course before graduating with a Professional Diploma in Digital Marketing. He had accomplished what he had set out to learn, which was to successfully launch online marketing campaigns and how to track and craft reports on campaigns. He was now ready to make a career switch into a field he had more interest in.

Upon graduation, Yu Hao was able to secure a job as an entry-level digital marketing executive shortly after he sent out his resume through Lithan Academy, which also helps students secure employment after graduation. Although taking on such a role meant having to take a significant pay cut. 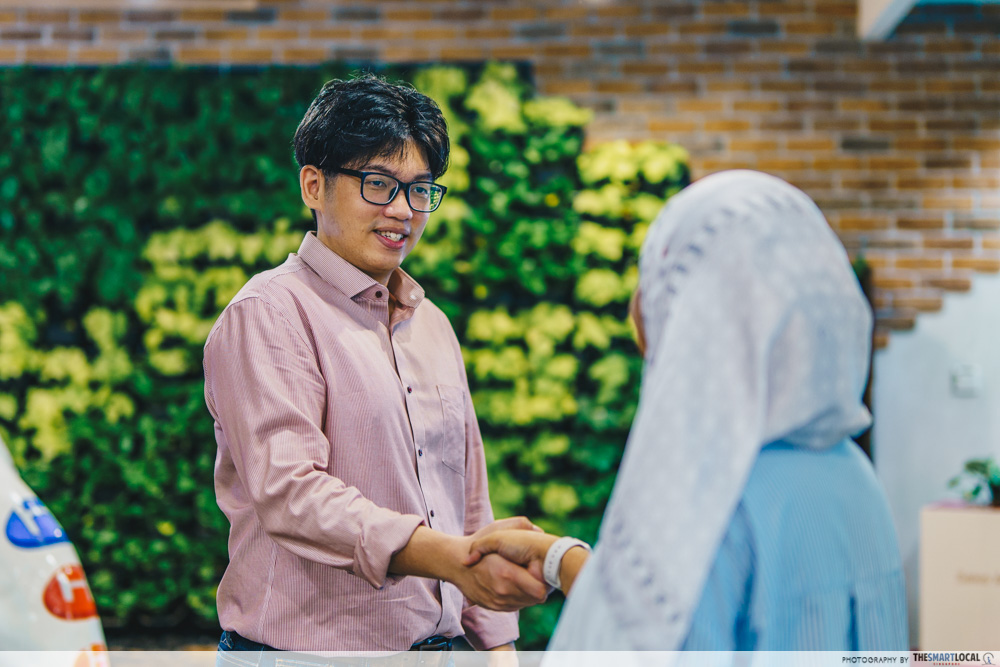 Lithan Academy offers their graduates a job-matching service with their network of companies while helping students with their resume and interview prep.

It’s common knowledge that IT is a more lucrative field but Yu Hao was prepared for the drop in pay. “Ultimately, my goal was to get into a field I was passionate about, so I understand that I had to start from the bottom again, even if that meant a lower pay,” he said.

Adjusting to his new role did take some time, like getting used to a new team and work culture. But the one area that Yu Hao felt that he was able to ease into quickly was the job itself as he was able to apply what he learnt to it.

Improving his company’s search engine optimisation score was one of the first tasks assigned to Yu Hao, which he could confidently do due to what had been covered at Lithan Academy.

Nine months into his role, Yu Hao still feels what he learnt from his course is fresh in his mind. With skills in SEO, Google Analytics and Facebook Business under his belt, he has been able to smoothly run marketing campaigns for his company.

Yu Hao’s career switch is just one of the many successes Lithan Academy has seen with its students. The training institute doesn’t just provide professional courses, but they also have value-added services like job matching and interview coaching for their graduates.

Digital marketing is just one of the many courses under Lithan Academy’s umbrella, of course. They have options relevant to high-demand industries such as data analytics and cybersecurity. They also offer certifications in skills like Innovation Management and Digital Transformation Leadership that add credibility to any resume.

Most courses don’t require any prior experience in tech or marketing. From the get go, students take on the self-paced learning approach, then supplement their learning and clarify doubts in flipped class training. This allows you to focus on areas you’re weakest in, rather than having to dedicate precious time on subjects you already know.

They’ll then put their newfound knowledge to the test by working in focus groups mentored by industry practitioners to execute real world projects. This converts their learning into actual practical skills employers are looking for.

Whether looking to further develop your skills in tech and marketing, or looking to pivot to a different industry altogether, Lithan Academy will be there to guide you from start to finish.

This post was brought to you by Lithan Academy.
Photography by Clement Sim. 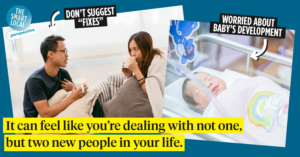 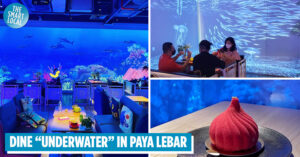