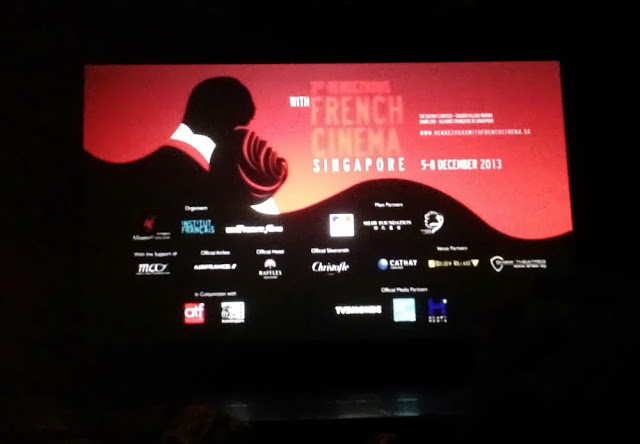 It is a collaboration between the Alliance French and most cinemas across Singapore to bring in French films for just one weekend. The films ranges from thrillers to romance (city of love after all) to erotica.

It is quite an impressive variety and it is definitely no less the best because they chose exclusively what to screen.

Because of my lousy time management and busy schedule, I managed to catch only one of the movies, which I will elaborate about later. But here’s a rundown of their films, to pique your interest!

Synopsis
The Cévennes in the 16th century. Michael Kohlhaas, a horse-dealer, leads a happy and prosperous family life until he suffers an injustice carried out by a lord. This pious and simple man raises an outlaw army and lays waste to the country by war in order to establish his rights once again.

Personal take
This was one of my must-watch because on one of the days, the director and screenwriter themselves came down to give a talk about this movie. AND I MISSED IT OVER WORK.

But it is one of the films with has a strong standing what with its impressive awards (Brussels for Film Festival 2013 and Golden Iris for Best Film) and I will not miss another screening for it.

Synopsis
Gregory Lioubov, alias Moses, a Russian secret services officer, is sent to Monaco in order to keep watch over a powerful businessman. For this mission, his team hires Alice, a top-notch financial expert who infiltrates the company. Gregory suspects that Alice has betrayed them; he breaks the golden rule and makes contact with his clandestine agent. An impossible passion develops between them which inexorably leads to their downfall.

Personal take
I love thrillers and this one looked extremely promising. I do not watch French movies much but I know any film with Jean Dujardin is destined for greatness. This movie guarantees heart drops and twists at every turn.

One of the films I have on my list and a must-watch as well.

Synopsis
An old couple living in a small village goes through their everyday rituals. However, each day they seem to be waiting for something. A metaphorical tale of tumult and the loneliness we live in. Singaporean Director Jow Zhi Wei spent more than a month living with his subjects on Penghu Island in Taiwan. His hard work paid off in the form of a nomination in The Cinefondation Selection of the Cannes Film Festival. After The Winter was picked from 1,550 entries submitted from 277 schools from around the world. It was among 18 short films (14 fiction films and four animated films) shortlisted for three Cinefondation Prizes.

Personal take
This was an exclusive, by-invite-only screening. By the impressive accolade of awards, one can already expected tremendously from this movie. I did not get to watch it so I searched the trailer online.

It looked like a beautiful, tragic tale. To see old faces in such varying forms of lethargy and weariness was painful. It seems like a slow, deliberate film and I want to watch it so much. Hopefully it re-runs!

Synopsis
Every evening, a girl, a boy, and an old technician get together in a small movie theater. The three friends invent, draw, dress up, and become characters in any story they feel like telling during one magical night when everything is possible. There are witches and fairies, powerful kings and stable boys, werewolves and beautiful, cruel ladies, cathedrals and sequins, cities of gold and dark forests, harmonies of vast choirs and the spells of a single drum, devastating malice and triumphant innocence.

Personal take
This was the only one I managed to catch and this one blew me away.

From the magical, wonderful storylines to the vibrant colors on screen, I cannot believe that I may never get to watch it again. The stories were all silly and about love and it makes you wonder what life is about.

Did I mention all these characters have no faces, only eyes? They struck a delicate mix of terrifying and fascinating with this movie. I have since made the movie stills my wallpaper heh.

From what I tentatively know, the next time it will be making a comeback is in January and I can barely wait! I am intending to clear out my schedule expressly for it. So goodbye social life and friends for one week!

0
SHARES
ShareTweet
Zoukout 2013 Survival Guide
Others can insult you, but you can't insult yourself