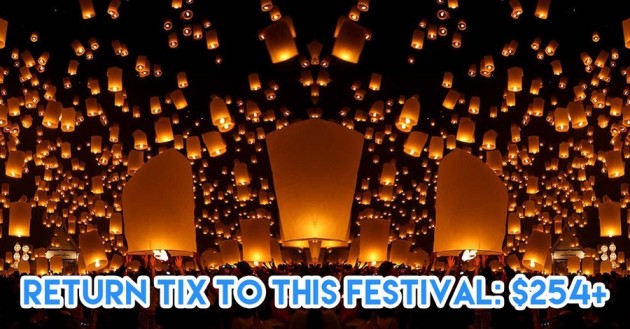 We hate to break it to you but YUP, there really are no public holidays or long weekends next February or March. That’s 74 days – or 53 working days – in a row without a proper break! But no fear my friends, there’s nothing Singaporeans can’t do. If gahmen doesn’t give PH never mind because you can still work some magic and that 4D3N weekend is yours.

Plant two days of leave before your weekend so you can jet off for a short getaway! Book your tickets early this coming 2 – 22 January 2017 on ZUJI.com.sg, pay using Visa Checkout and you get a $50 rebate (with a minimum of $500 spent)!

Ticket prices are a steal right now so here is a list of places you can hit to quench all that wanderlust thirst despite the PH drought:

*All flight prices are two-way and include taxes and surcharges. Prices will vary with dates. 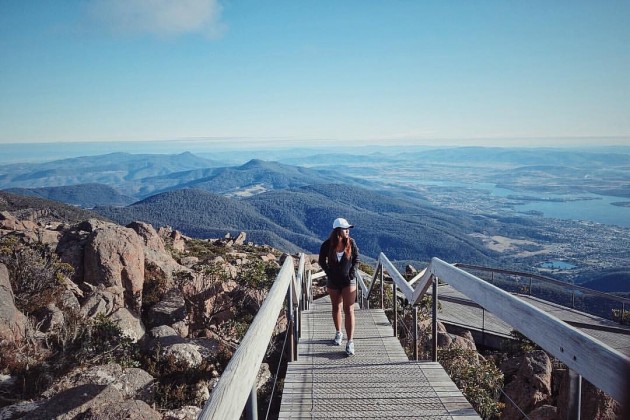 February marks Summer for Tasmanians and if the name sounds familiar… No we don’t mean Taz from Looney Tunes. We’re talking about the beautiful and isolated South-Aussie state that’s been ranked one of the world’s best islands. Usual tickets will empty your savings but with them finally being under $1K, time to pounce, wanderlusters.

Take advantage of the cool temperatures and hit the road this February. A 30-minute drive from Hobart City brings you to Mount Wellington. Being 1,269 m above sea level, the splendid views will take your breath away. It might be a little windy at the top so hold your sweater close!

Two way flight to Hobart: from $767 per adult (include taxes and surcharges) 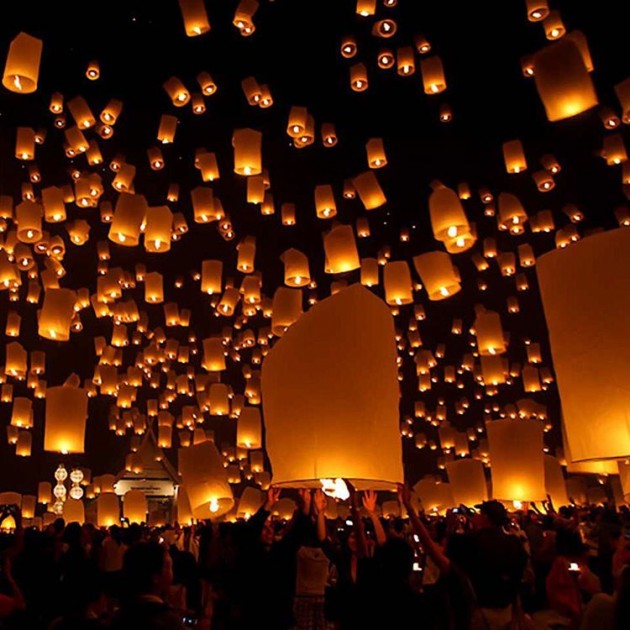 Revered as the second largest nocturnal festival in the world, Taiwan’s annual Pingxi Lantern Festival is happening on 11 February 2017! Watch majestic lanterns float and illuminate the night sky, sending your heartfelt wishes for your loved ones to the heavens.

Drop by Shifen for some food before you head to the nightfest and don’t leave without a picture of the Shifen Waterfall – a 20-meter tall waterfall that’s known for creating rainbow splashes as it flows into the lake!

Two way flight to Taipei: from $282 per adult (two-way tickets, include taxes and surcharges) 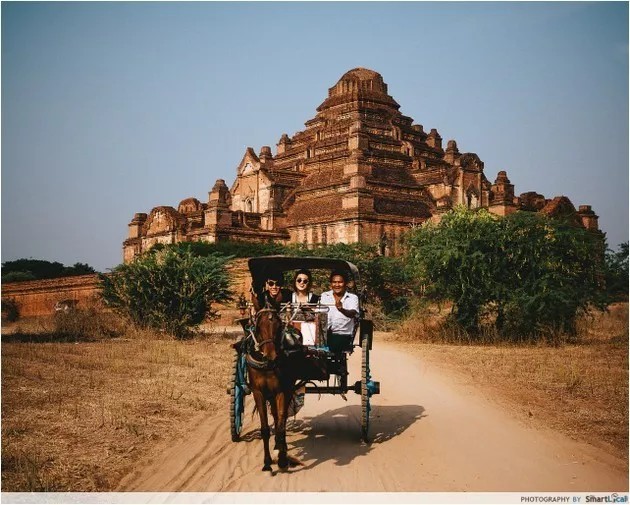 Now that you don’t even need a travel visa, there’s no better time to grab your backpack and start exploring Myanmar, one of the world’s least explored civilisations.

Head there in February before the extremely dry and hot weather hits. Live out Temple Run in real life when you visit their ancient monasteries and temples, or simply charter a pony for a once-in-a-lifetime ride around the city! 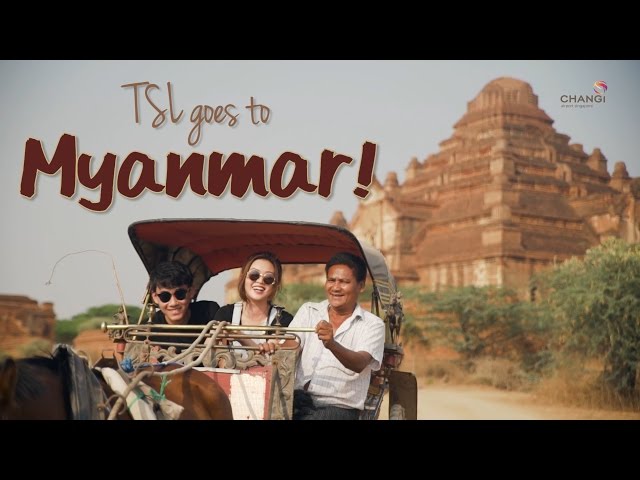 Two way flight to Mandalay: from $686 per adult (inclusive of taxes and surcharges) 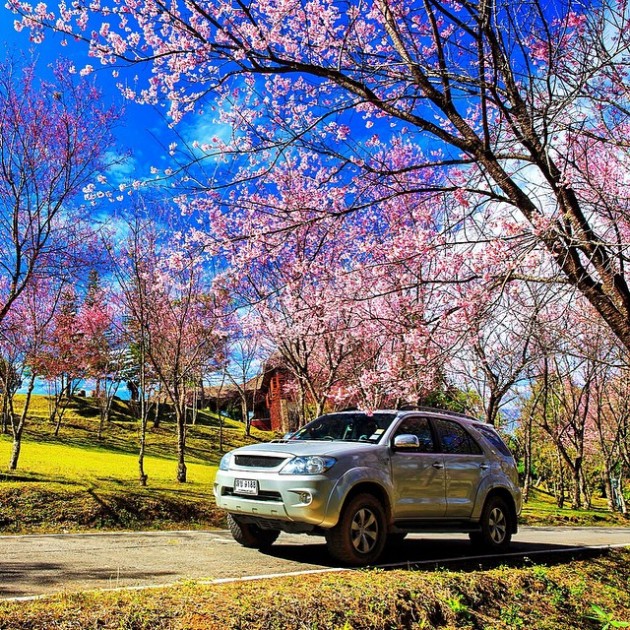 Bet you thought this was Korea, because this beautiful cherry blossom-showered backdrop looks DAMN LEGIT. Closer than you think they are, the land of smiles is actually home to Thai Sakura trees that come into full bloom in February! Direct your own K-drama scene just by visiting the Doi Inthanon National Park up north of Thailand.

Two way flight to Chiang Mai: from $272 per adult (two-way, include taxes and surcharges) 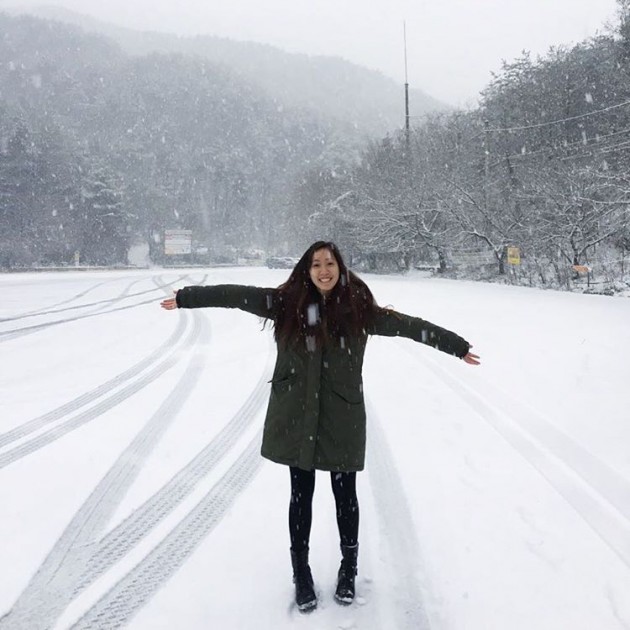 Never (in a million years) will Singapore have fresh snow for us to dive into and shape angels at our door step but the land of kimchi materialises that dream close enough. Winter in South Korea ends in February and besides snagging beauty samples from street shops along the cold streets of Seoul, go ice skating instead. 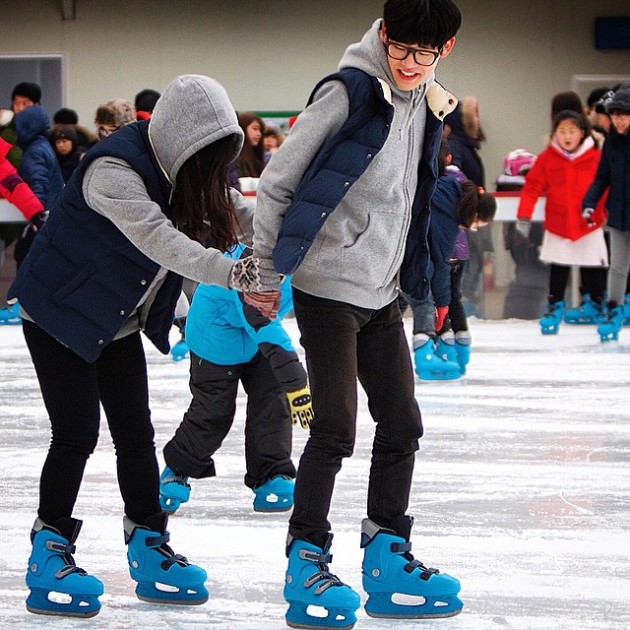 Beat that classic Stairway to Heaven ice skating scene by taking bae on a spin on real frozen ice out in the open.

If Frozen’s not quite your kinda thing, then check out the Jeju Fire Festival that’s gonna take place around the same period. From flash mobs dance performances to even a Deomdoldeolgi (Stone Lifting) Contest visitors can join, this short getaway will reignite your love with nature. Best part: admission is FREE!

Two way flight light to Seoul: from $337 per adult (include taxes and surcharges) 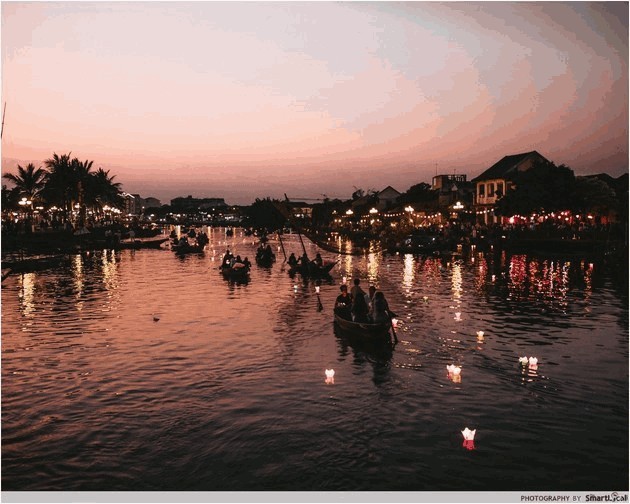 Fans of Tangled, brace yourself for the real thing in Hoi An. Take an hour’s drive from Da Nang’s city centre and you’re be on your way to being part of the monthly Full Moon Lantern Festival. Every 14th day of the lunar month, the old town bans usage of all motorised vehicles and minimises electricity so it’s rustic surroundings are lit by a sea of colourful lanterns.

It’s happening on 10th February and 11th March 2017 and you won’t miss it if you keep close to the Cau An Hoi Bridge. So grab a few lotus lanterns, make a wish and release them into the river! Find out more on what to do in Vietnam here.

Two way flight to Da Nang: from $286 per adult (include taxes and surcharges) 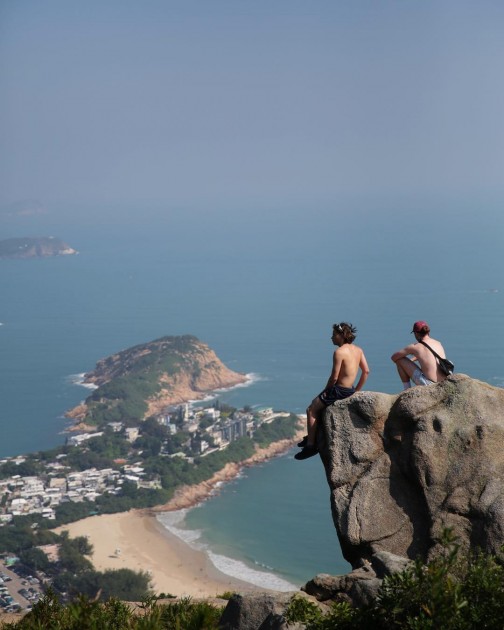 You know what Hong Kong means: you don’t leave without stuffing yourself full with endless trays of food. But besides waking up every morning to the scent of freshly-baked polo buns, you can think of ways to werk the dimsum off.

Hike along the scenic nature reserves in Saikung or visit Dragon’s Back, a long hill top trail that provides mesmerising sights of Shek O, Tai Long Wan, and the South China Sea. It might be chilly but there’s nothing a good sweater or windbreaker can’t fix for that marvelous view!

For those of you who can’t live without a slice of the Arts, the timeliness of the annual Hong Kong Arts Month can’t be more on point. It’s happening from 16 February to 18 March 2017, meanwhile you can also be hipster at these places.

Two way flight to Hong Kong: from $171 per adult (include taxes and surcharges) 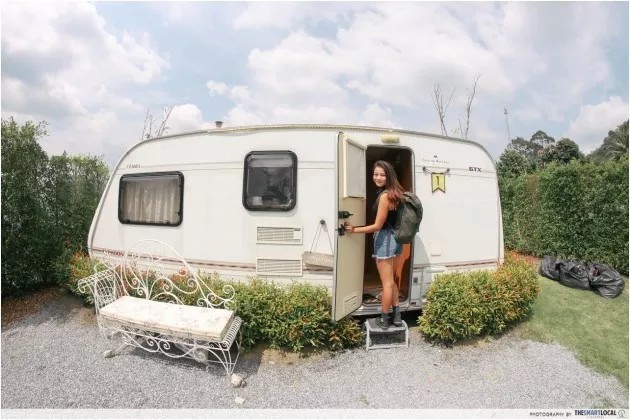 Just because it’s Bangkok doesn’t mean you gotta join the human tetris at Chatuchak market all weekend. Khao Yai might be a little out of the way but for adventurous individuals, it’s gonna be right up your alley.

What’s 3 hours spent travelling when you can spend GLAMP a night out in a caravan? Now if a caravan’s still too mainstream for you, surely no one can beat a hobbit stay in The Shire that’s only S$60! I haven’t seen tickets to BKK being his cheap, now Bilbo also wants to be jio-ed.

We kid you not about the wonders of this inconspicuous town so read the rest of it here.

Two way flight to Bangkok: from $114 per adult (inclusive of taxes and surcharges) 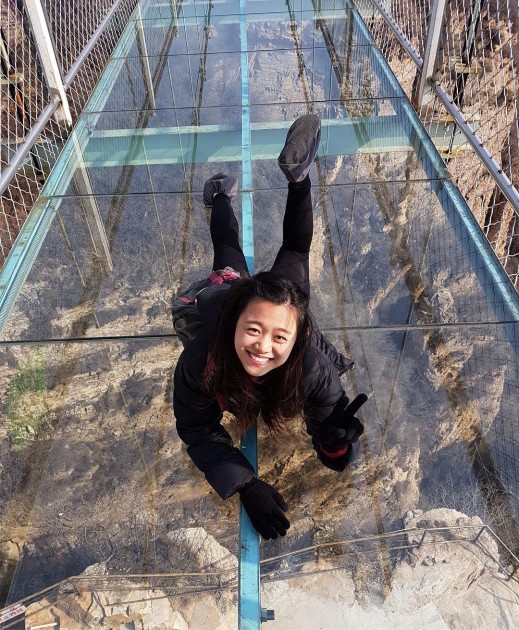 Beijing’s more than steamed trays of XLBs and springy zha jiang mian. The weather in March warms up nicely and if you’re already up for long hikes, it’s time to fully channel your inner gungho. TSL challenges you to climb Tian Yun Mountain and cross their glass mountain trails!

Tucked away in Pinggu District, Beijing, we swear this is something that’s certainly not for the faint-hearted. From gorgeous steep cliffs to towering peaks and dense forests, the magnificent view will make your pee-scares on the way up worthwhile.

Two way flight to Beijing: from $363 per adult (inclusive of tax and surcharges)

It might not be a long break from the concrete jungle, but a 4D3N getaway can be as fulfilling as you want it to be. Plan it early and plan it well, so when the time comes, you can get your well-deserved rest without having to pay for overpriced last minute tickets.

To make things better, the folks at ZUJI and Visa decided to cheer you – and your wallet – up with a promotion that’s gonna brighten your PH-deprived February and March! Book your flights, a hotel room or any package on ZUJI.com.sg between 2 – 22 January 2017 and get a $50 rebate when you spend a minimum of $500. All you gotta do is pay with Visa using Visa Checkout! 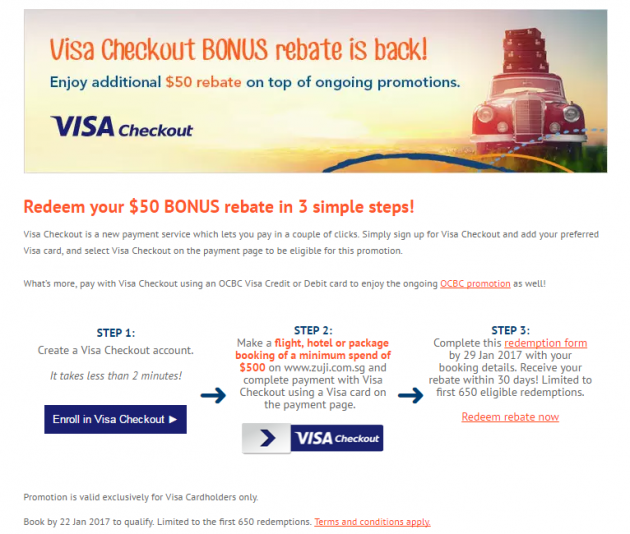 This post was brought to you by ZUJI and Visa.