Saigon is a major commercial hub in southern Vietnam, so the severe Covid-19 outbreak in the city has affected the lives of countless residents in the city, and by extension, those in neighboring provinces.

Strict measures are being implemented in several areas to stem the spread of the disease. But understandably, few people are happy about being cooped up due to stay-at-home orders. Some try to sneak in an outdoor stroll or two when law enforcers are not around.

Many don’t seem to realize such actions entail a heavy fine. And when confronted by authorities, they go out of their way to escape the consequences. This man, for instance, literally went out of his way by jumping into a river to swim away in an attempt to avoid having to pay his fine.

Read on for footage of the bizarre event.

The man jumps into a river after seeing police officers around

According to Tuổi Trẻ, the incident happened in Mỹ Tho City, Tiền Giang Province. The city is currently under a strict social distancing policy, where citizens are urged not to go out save for essential reasons such as buying groceries and medical supplies.

Despite the order, a man still went out for a stroll on the sidewalk next to a river. His action was recorded in a video, presumably by a police officer as evidence to issue him a fine. In the video, the recorder’s voice can be heard calling for the strolling man to stop. However, he ignored the call and simply quickened his pace.

After a few seconds, realizing he couldn’t run away, the man seemed to grow desperate. Then, in a turn of events no one expected, he jumped into the river and swam away.

However, as his violation is documented, it’s unlikely that he’ll escape the long arm of the law.

Many other lawbreakers were also caught The river-jumping man is not the only one ignoring social distancing rules in the city. Dozens of others were also spotted walking their pets or exercising in public places, Tuổi Trẻ reported.

Many fled when they saw authorities coming to enforce the orders, but over 20 cases were fined.

We find it puzzling that these people knew full well they were breaking the law, did it anyway, then went above and beyond to avoid the consequences. It would seem the much easier and more sensible approach would be to just adhere to government directives in the first place.

It’s not fun, we know. But Vietnam is facing a dire situation, and it requires our joined effort to overcome this ordeal. For now, let’s postpone non-essential activities until a later date – hopefully not too far in the future.

Cover image adapted from Công An 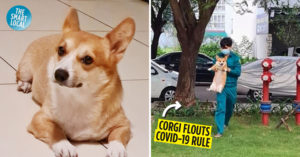