8 facts about the 31st SEA Games in Vietnam

The Southeast Asian Games, or SEA Games for short, finally comes back to Vietnam this year with its 31st event. Like the Tokyo 2020 Olympics, the preparation for the 31st SEA Games in Vietnam has been through heaps of difficulties due to the pandemic and drawn much attention from the Vietnamese public.

In this article, we will give you 7 essential facts about the 31st SEA Games this year.

1. It’s the 2nd time Vietnam is hosting the SEA Games 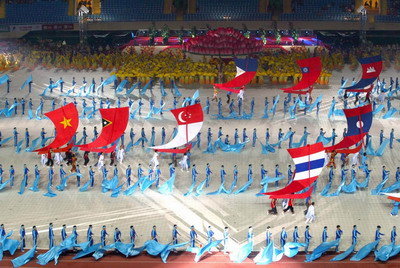 SEA Games is a biennial sporting event, meaning it is held every two years by a selected city in Southeast Asia. This is the second time Vietnam is hosting this event since the 22nd SEA Games in 2003.

In the SEA Games this year, sportspeople from 11 countries will compete in 526 categories of 40 different sports, about two-thirds of which are official sports at the Olympics.  Non-Olympics sports present at the Games will include kurash, xiangqi, vovinam, pétanque, muay Thai, wushu, sepak takraw, and so on.

2. The event was postponed for six months due to the pandemic 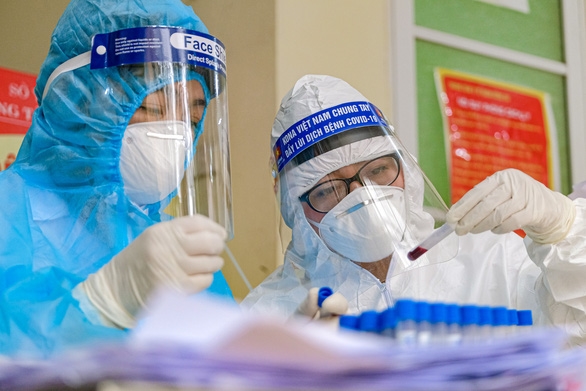 Vietnam has made great efforts in controlling the pandemic in the past year, which facilitates the 31st SEA Games to take place this 2022.
Image credit: Người Lao Động

The 31st SEA Games was originally planned to take place from 21st November to 2nd December 2021. However, at that time, the pandemic in Vietnam was not under control yet, so the organisers decided to postpone the event. With the new schedule, it will roll out from 12th to 23rd May 2022.

According to VOV, the new schedule was picked in order to avoid clashing with the Winter Olympics in Beijing, China, the Asian Indoor and Martial Arts Games in Bangkok, Thailand, and the Commonwealth Games in Birmingham, the UK. In addition, this schedule will give the Cambodian government more time to prepare for the 32nd SEA Games in Phnom Penh next year. 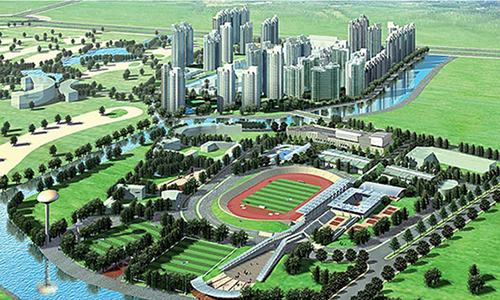 The mock image of the Rạch Chiếc Sporting Complex in 2018.
Image credit: VnExpress

According to VnExpress, in early 2018, Hồ Chí Minh City’s government submitted a tentative plan for the event with an estimated budget of about VND15,612,000,000,000 (~USD683,463,697.20). Most of this fund was planned to be used for the SEA Games facilities, including building the new sporting complex at Rạch Chiếc and upgrade the facilities of Phan Đình Phùng and Phú Thọ Indoor Stadium. 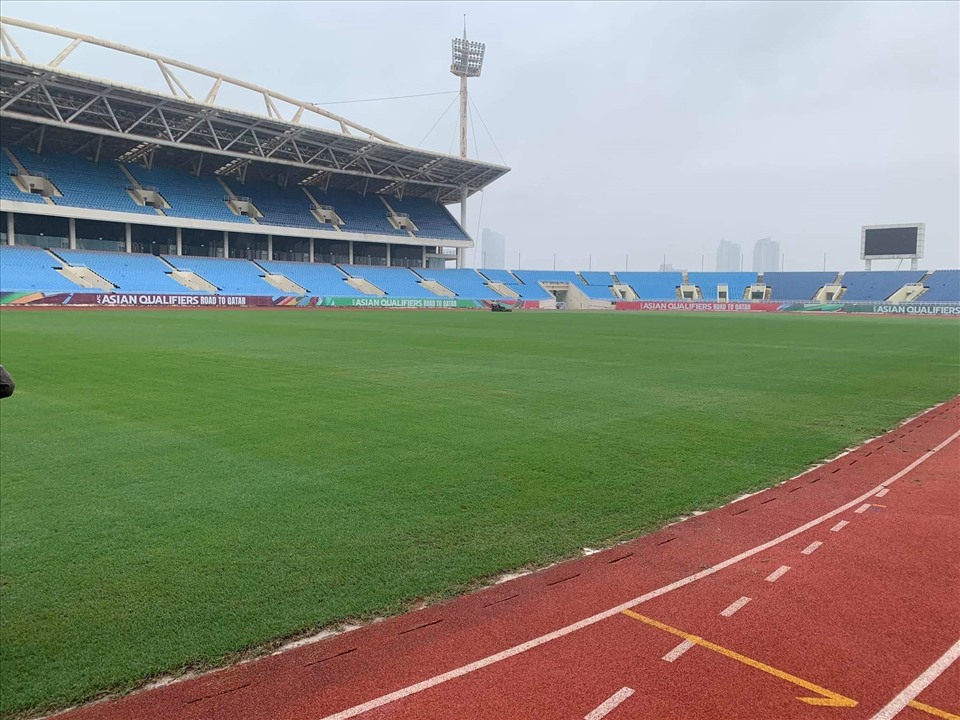 Mỹ Đình National Stadium built for the 22nd SEA Games will be one of the main venues for the SEA Games this year.
Image credit: Lao Động

This was how Hanoi was chosen as a replacement host for the 31st SEA Games thanks to its existing sports facilities. Many netizens have praised this decision as it would save lots of money.

4. The mascot has caused much controversy 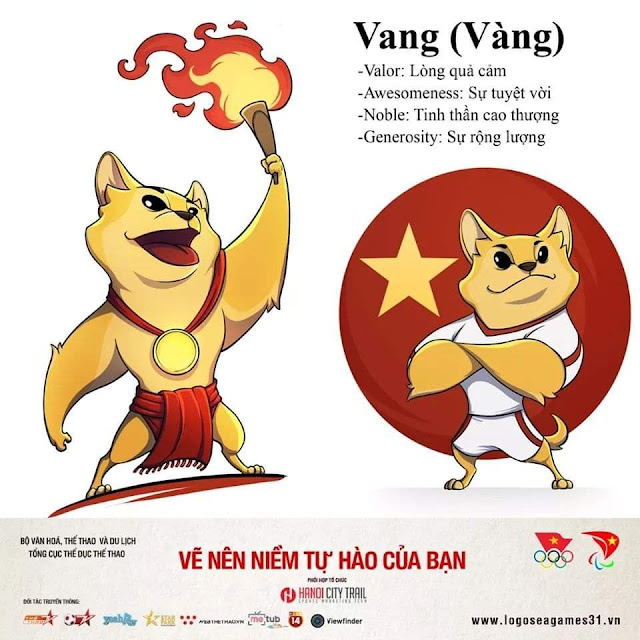 The most voted mascot design in the beginning was a golden Lài dog, a native breed of Vietnam.
Image credit: Vietnam Television

The branding campaign for the 31st SEA Games has ignited a heated debate on the internet, mostly over its logo and mascot’s design. On 30th August 2019, the Vietnam Olympic Committee launched a design competition for a potential logo, mascot, and theme song for both the 31st SEA Games. This competition attracted considerable public attention.

In October 2021, the competition ended with the announcement of the top-voted mascot design, which was a golden Lài dog named Vàng holding a torch. 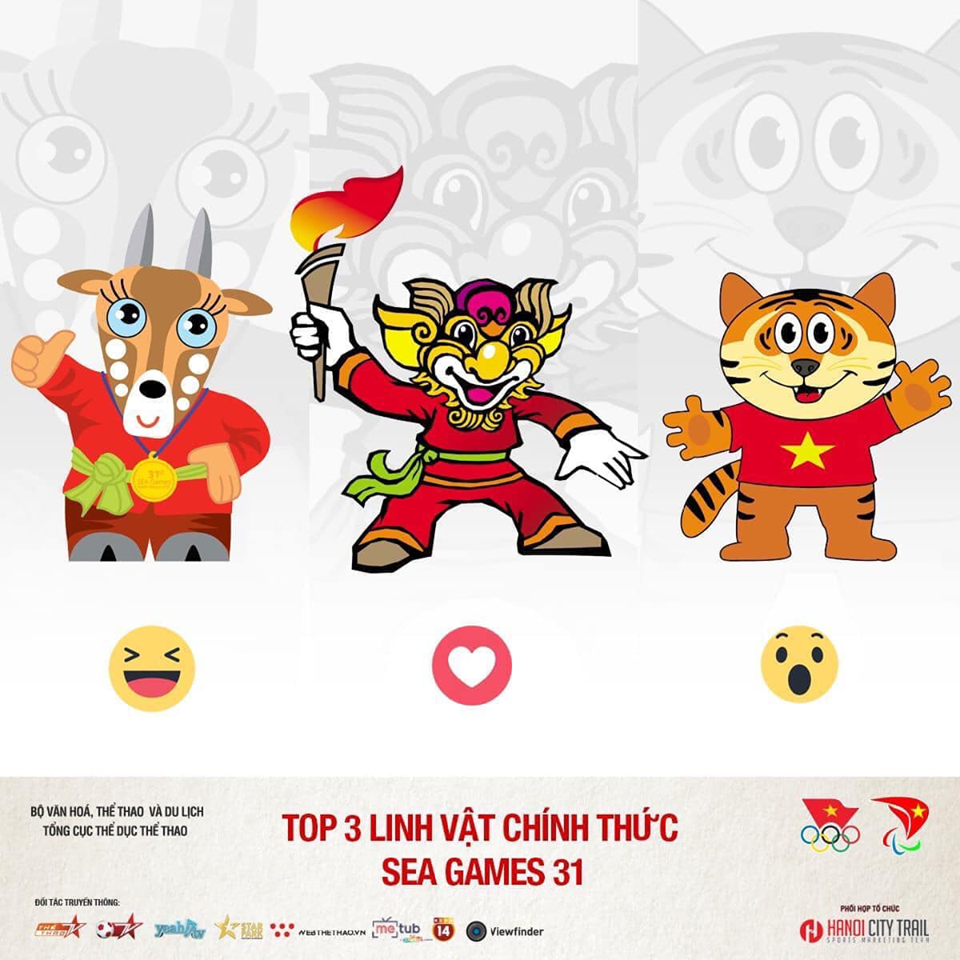 The three official mascot finalists have received lots of criticism due to their aesthetics.
Image credit: Lao Động

However, the SEA Games organisers later picked three different finalists for the official mascot. These designs were met with the netizen’s criticism over their aesthetics, calling these designs awkward or ugly compared to the Lài dog one. Facing backlash, the organisers clarified that the designs would be refined.

5. The final mascot is an endangered species 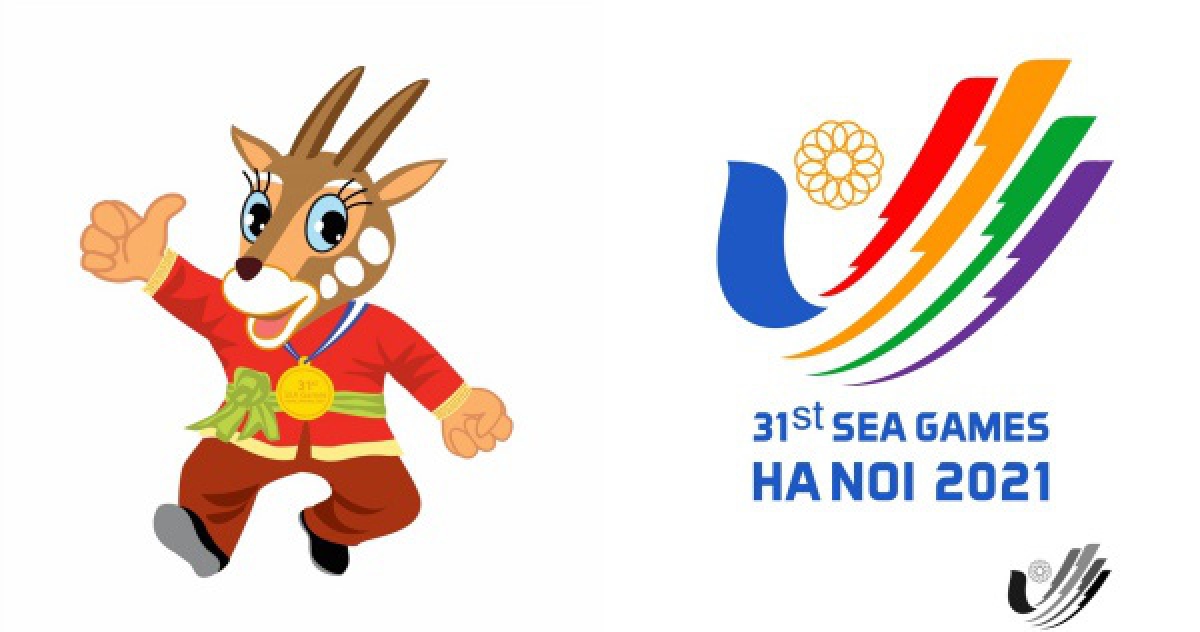 The logo and the finalized official mascot of the 31st SEA Games
Image credit: Voice of Vietnam

In November 2020, the organisers announced the official logo and mascot for the 31st SEA Games. Designed by Ngô Xuân Khôi, the official mascot, Sao la, is inspired by an animal called the spindle horn, an endangered distinctive species of Vietnam. 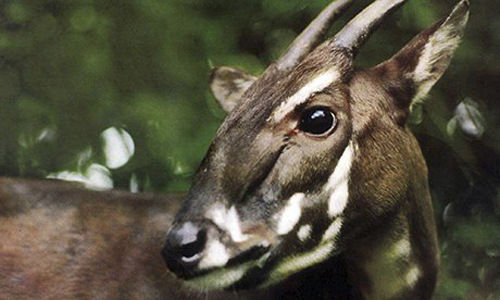 It is extremely difficult to picture a sao la in its natural habitat. The last times it was pictured were in 1998 and 2013.
Image credit: VnExpress

Sao la, also nicknamed “the Asian unicorn”, was found in 1992 on the Annamite Range separating Vietnam and Laos. This discovery shocked the world as it was nearly impossible to discover any new big mammal in our modern era.

At the time of discovery, there were about 20 sao la living in their natural habitat. Sao la are currently listed as Critically Endangered (CR) in the International Union for Conservation of Nature and Natural Resources Red List.

Apart from the mascot, Hoàng Xuân Hiếu’s design was also chosen as the official logo of the event. It represents both a dove of peace flying to the sky and the letter V as in “victory” and “Vietnam.” The shape of the logo also symbolises a person’s hand touching their chest when he or she sings a national anthem.

On 28th February 2022, the organisers announced that Hãy tỏa sáng (Let’s Shine) will be the theme song of the two events. This song is composed by Vietnamese veteran composer and musician Huy Tuấn. Veteran singer Tùng Dương is set to be the main performer.

6. PUBG will be an official sport in the Games 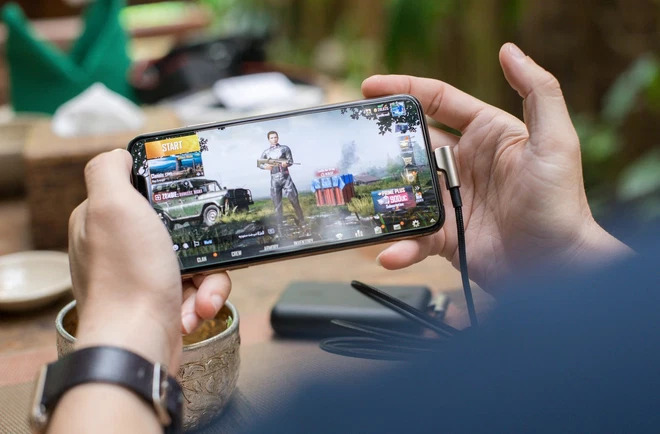 The world’s phenomenal mobile game PUBG will make its debut in the 31st SEA Games this year.
Image credit: GenK

Following their first appearance in the 30th SEA Games in the Philippines in 2019, electronic sports, or esports for short, continue to appear in the 31st SEA Games this year. Athletes will compete in 8 game titles divided into 10 categories.

Among these game events, Arena Valor and Mobile Legends: Bang Bang are being retained from the previous SEA Games while six new titles have been added, including many popular ones such as PUBG and League of Legends.

7. Three plans were proposed to hold the opening and closing ceremonies in the pandemic 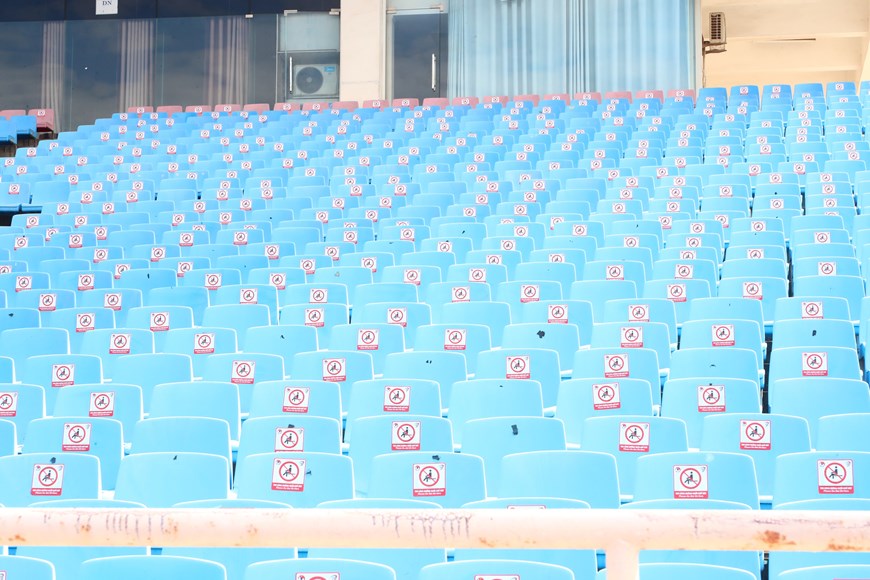 Many methods will be used, as at the Mỹ Đình National Stadium in this picture, to control the number of spectators at the opening and closing ceremonies as well as at sporting events.
Image credit: Vietnam+

Because the pandemic situation is getting complicated in Hanoi, the opening and closing ceremonies will be held with some restrictions to minimise the threat of Covid-19. In fact, Hanoi’s government has three alternative plans for the two ceremonies.

If the pandemic in Hanoi is in level 1, or in other words, well-controlled, the ceremonies will proceed as normal, plus some preventive measures such as attendees keeping a certain distance from each other, sanitising hands, wearing masks, and so on.

In the event that the situation reaches level 2 or 3, which means that the Covid-19 case numbers in Vietnam are rising rapidly and threaten to overwhelm the healthcare system’s capacity, the ceremonies will take place with half of the maximum audience. The spectators will also be instructed to come to the stadiums at specific time slots.

In the worst scenario, meaning that the pandemic reaches level 4, overloading the city healthcare system, the ceremonies will be implemented as a “movement bubble”. All coaches, athletes, and sports officials will only be allowed to move around a specific area, follow strict itineraries to get the venues, and get tested for Covid-19 every 72 hours. The number of spectators at the ceremonies will not exceed 50% of the maximum capacity. 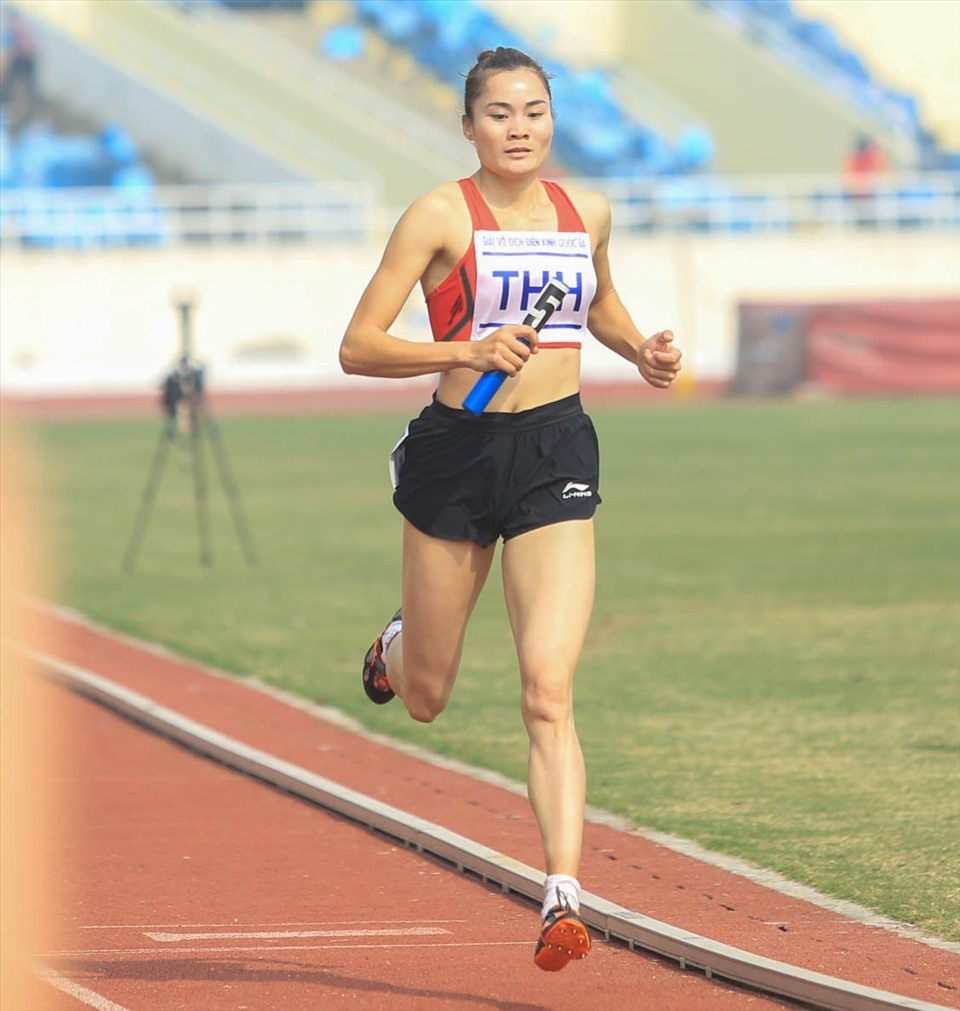 Quách Thị Lan effortlessly defeated her competitors in the selective round for the Vietnamese athletics team in the 31st SEA Games.
Image credit: Lao Động

The 31st SEA Games this year marks the return of the Vietnamese athlete Quách Thị Lan. The 1995-born sprinter and hurdler is a remarkable name in the field of athletics in Vietnam. Her individual achievements include silver medals at the 27th and 28th SEA Games (in 2013 and 2015 respectively), Asian Games (2014 and 2018), and Asian championships (2017).

However, in 2019, she, unfortunately, suffered from serious injuries. Therefore, she had to withdraw from the National Championship in 2019, leaving her fans disappointed. Having fully recovered, she is expected to bring medals to the Vietnamese athletic team this SEA Games. 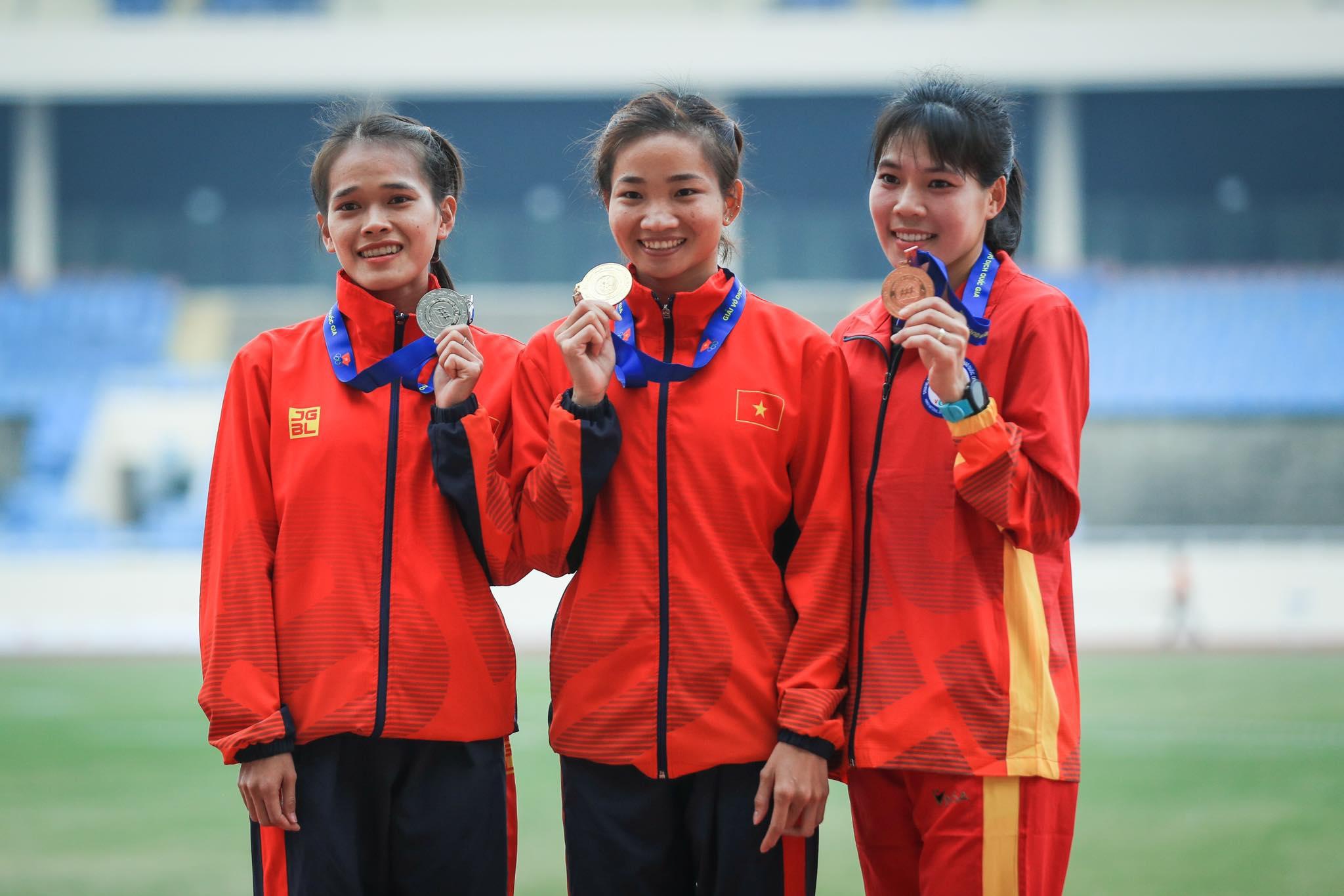 Nguyễn Thị Oanh, often dubbed as the Vietnamese queen of track and field, is also participating in the 31st SEA Games, giving hopes of yielding great results for the Vietnamese athletics team. In 2021, she successfully protected her gold medals in many categories of the National Athletics Championship.

Also in this tournament, she broke the 18-year-old national record in the female 5000m running category. At the 30th SEA Games, she contributed three gold medals to the achievements of the Vietnamese team.

The 31st SEA Games is ready to start

Though the 31st SEA Games has faced many difficulties in its preparation, everything appears to be falling into place at the moment. Let’s set all the controversies aside and look forward to the great performances of Southeast Asian athletes.

Celebrating peace, sportsmanship, and solidarity, the event sends out a message of hope across Southeast Asia in such a challenging time. 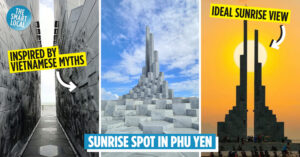 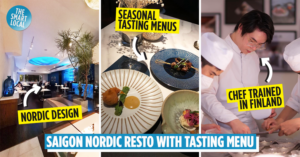