We were all excited when Disney Plus made a splash in Singapore, with an absolutely bonkers light show at Marina Bay, no less. But what really excited us about this contender to Netflix was one particular show – WandaVision.

After the fallout that was Avengers: Endgame in cinemas, there was a gaping hole left in our heart – not to mention the heartbreaker that was Tony Stark’s arc and Chadwick Boseman’s passing in real life. And when Covid-19 hit and the movies were delayed, we Marvel fans were starved for our superheroes. That is, till this series hit.

WandaVision follows mighty Avengers Wanda and Vision after the events of The Snap™ and seems to be a peek into the next chapter of their lives. But wait, why is it happening in the 1950s?

I sat down with Ra, an MCU noob, to watch nine episodes back-to-back in a binge we’re not proud of to deliver the verdict if the show lives up to its original vision.

Spoilers alert, obviously. Also, please turn away now if you’ve not watched Avengers: Infinity War and Endgame and are planning to. 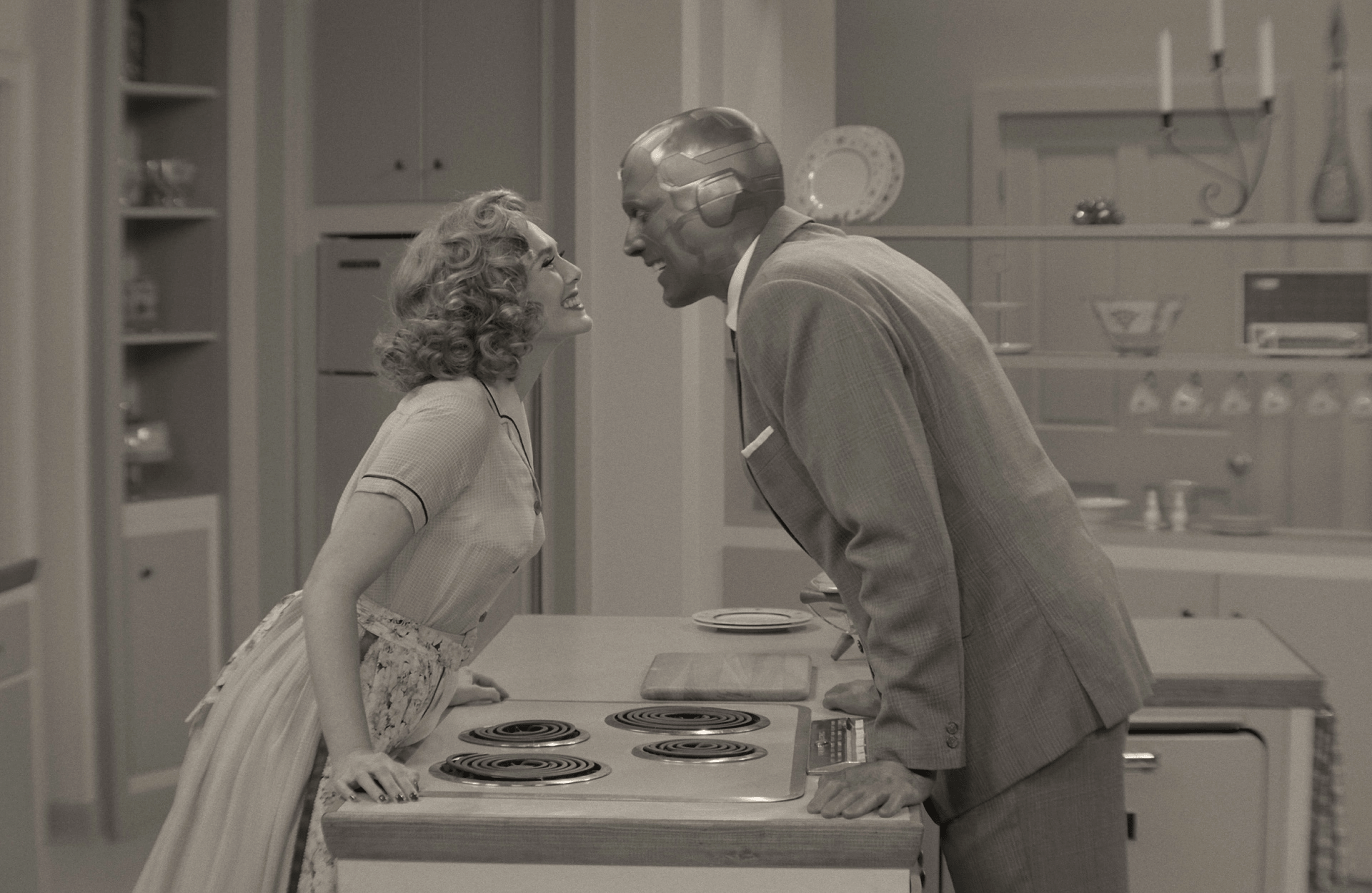 The series begins with the Scarlet Witch as the refreshingly normal Wanda Maximoff, who with Vision, tries to blend in into the town of Westview in the 1950s.

Ra: What’s up with the black and white? Is this a non-superhero spin-off? Either way, it looks pretty cool. But before we get into it, I have to ask: what is Vision exactly? A robot? An android? A robot-android-but-also-human-man? So many questions.

Jess: That is the real question, Ra – though he technically is a *takes deep breath* synthezoid made out of vibranium, created by Ultron but given life by the Mind Stone – I’m not even sure that the Vision we’re watching now is exactly that.

That’s because any MCU fan would know that this suburban life is impossible considering Vision’s untimely end in Infinity War. Still digging the fantasy of the first few episodes though – the different theme songs, costumes and fish-outta-water jokes are gold. Plus, the light hearted sitcom shenanigans are a nice contrast to the mystery seething below the surface.

An unexpected pop of colour in episode two – WHAT. IS. HAPPENING!
Image credit: Marvel

Ra: Knowing nothing about the MCU, I must say I’m a fan of the two superheroes so far. As actors, Elizabeth Olsen and Paul Bettany have fantastic chemistry – and though we love a healthy on-screen couple that’s not destined for doom, I’ll manage my hopes for that one. I’m sure this isn’t going to be a show about Wanda and Vision living happily ever after, is it?

You can tell something’s going on right in the first episode; that dinner scene with Mr. Hart was unnerving to say the least. As the show goes on and we see more breaks in this “universe” – like, who tf is that beekeeper?!

I’m beginning to think all of this is Wanda’s doing. I mean, she did literally yeet Geral- err, Monica, out of the force field.

We go from Wanda and Vision worrying about cooking dinner and having children to a horrifying glimpse of Vision’s corpse and dealing with dead pets – so yeah, you’ll have a lot to unpack once you get to the midway mark of the season. 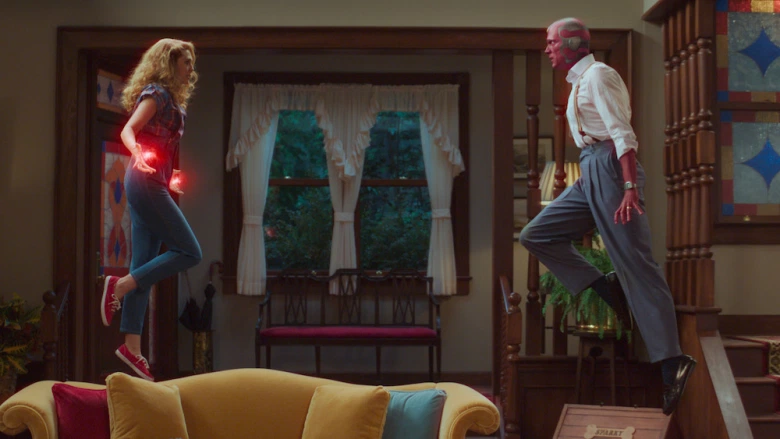 The usually lovey-dovey couple faces an uncharacteristically heated moment in episode five. Also, do those curtains say ‘M’ or is that just us?
Image credit: Marvel

Jess: Everything begins falling apart – or actually makes more sense as we’re introduced to the world beyond Wanda’s Hex in the series’ midpoint. Monica Rambeau (a.k.a. the future superhero Photon), is the protagonist in episode four and we get to see real-world effects of the reversal of the snapping through her eyes – I’d call it the “unblipping”.

We also navigate more traditional MCU territory like shady acronym-named organisations, the appearance of Quicksilver (the Fox X-men version, though), and Wanda using her powers for real damage.

Ra: I have no idea what “unblipping” refers to or what Monica Rambeau’s significance is, but things do indeed get crazy. For starters, Wanda and Vision are parents to children that can’t stop growing, the neighbours are acting weird, and Vision is starting to see through the cracks.

Plus, we finally can confirm the theory that none of this is even real and that the town is under some sort of mind control by god knows who. Bets are still on Wanda. Although I have to say, Agnes does seem a little sus. Or maybe not. What do I know? 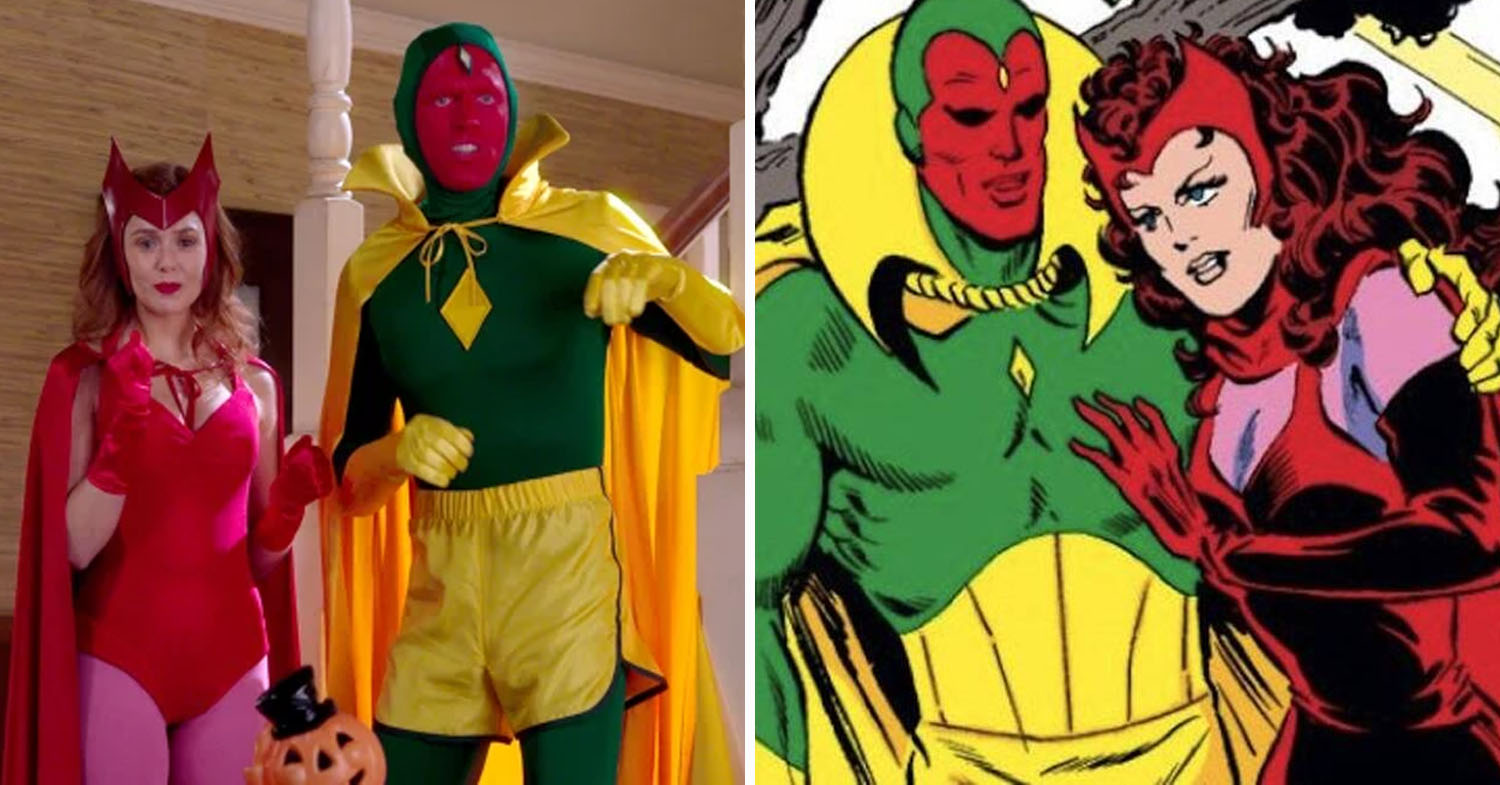 Comic fans might have picked up this fun reference to their OG costumes in the Halloween episode
Images adapted from: Marvel, Marvel Comics 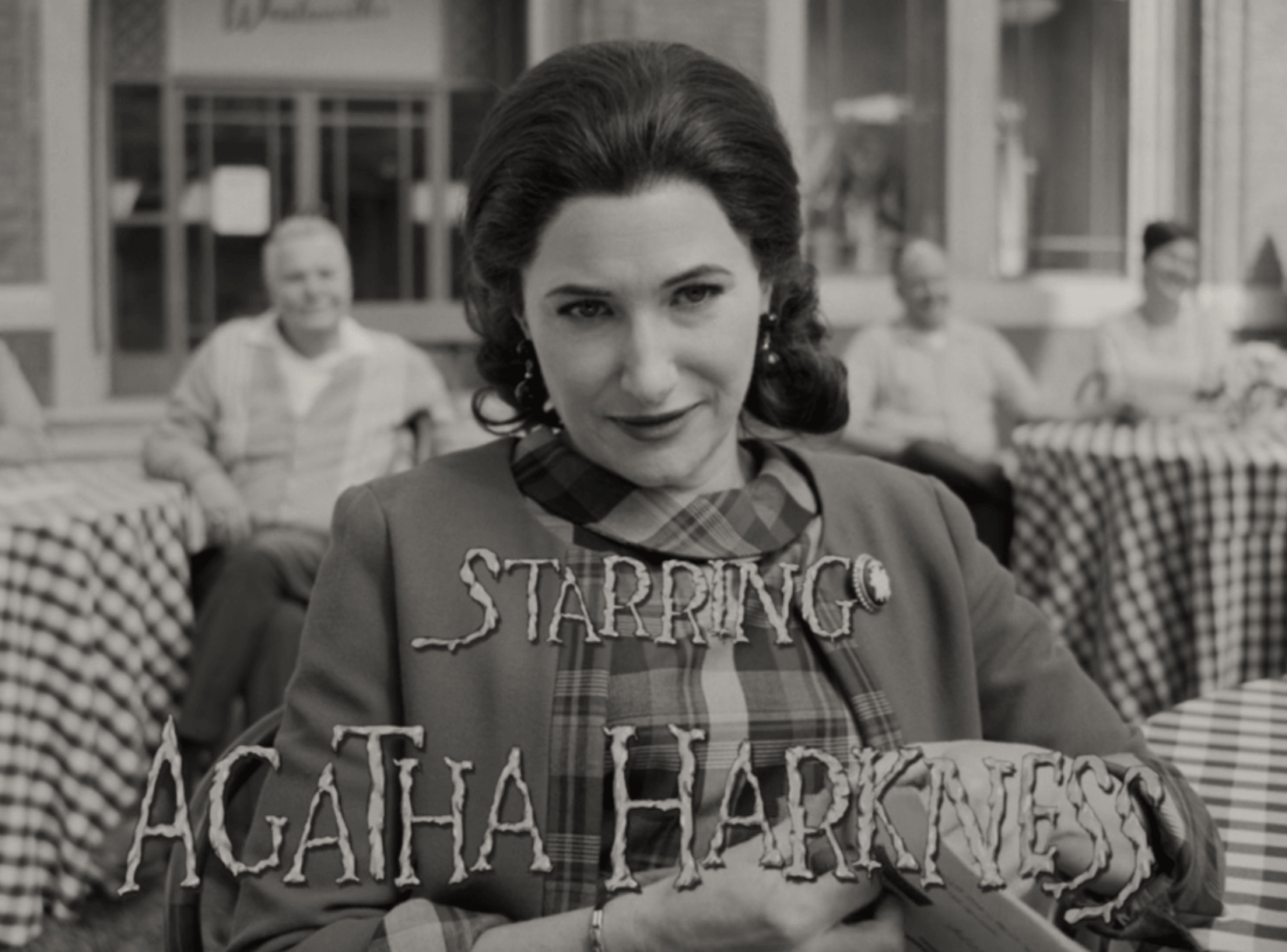 Jess: Wow, that was a wild ride. From Agatha Harkness’s reveal to Wanda finally embracing her Scarlet Witch side and that awesome costume, the last few episodes really raced to a satisfying conclusion.

There were definitely a few tear-jerking moments with Vision delivering the most gut-wrenching lines – “What is grief, if not love persevering?” – and his thoughtful goodbye with Wanda as she retracted the Hex. Also, who could forget that “Ship of Theseus” thought experiment? How utterly Vision to battle with his mind.

Ra: Two words: Kathryn Hahn. What an icon. So Agnes WAS indeed sus, having been Agatha Harkness all along. Though the episodes were boiling down to the big reveal with hints here and there, the shock factor wasn’t diluted all that much and made for a nail-biting finale with Wanda finally becoming the Scarlet Witch. 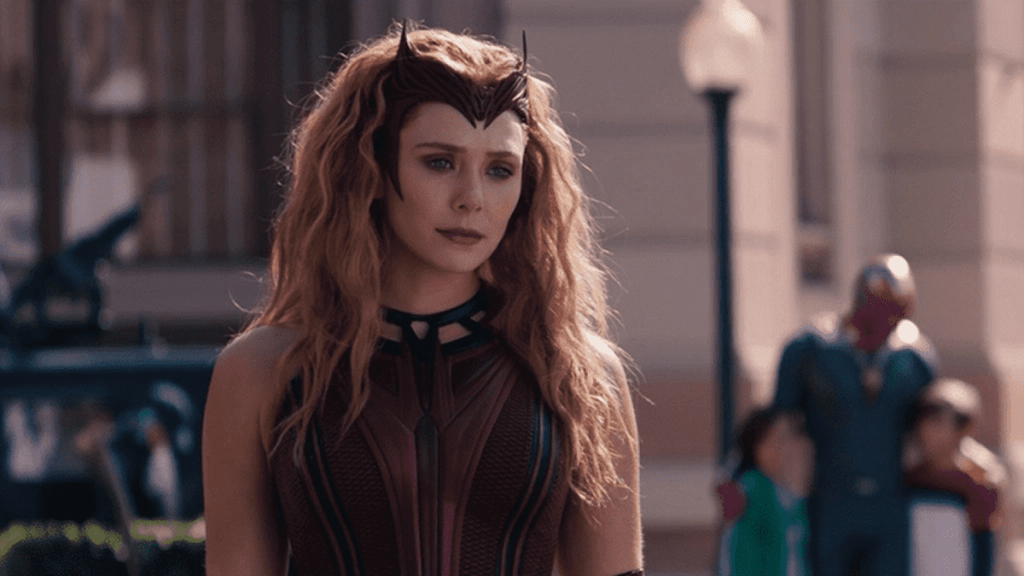 However, my favourite bit wasn’t Hahn’s portrayal of Agatha or even the sick references to 90s sitcoms peppered throughout the last few episodes. It was that Wanda was the most human she’d ever been throughout the entire series. Suddenly, moments like her seeing Vision’s dead body and controlling others at her will make sense and made me appreciate her as a character even more.

Trauma is tough – even for superheroes. Though she did some pretty inexcusable things, all I wanted by the end of the show was for Wanda to just have a sitcom-perfect ending with her husband. Oof.

So what do we think about WandaVision? 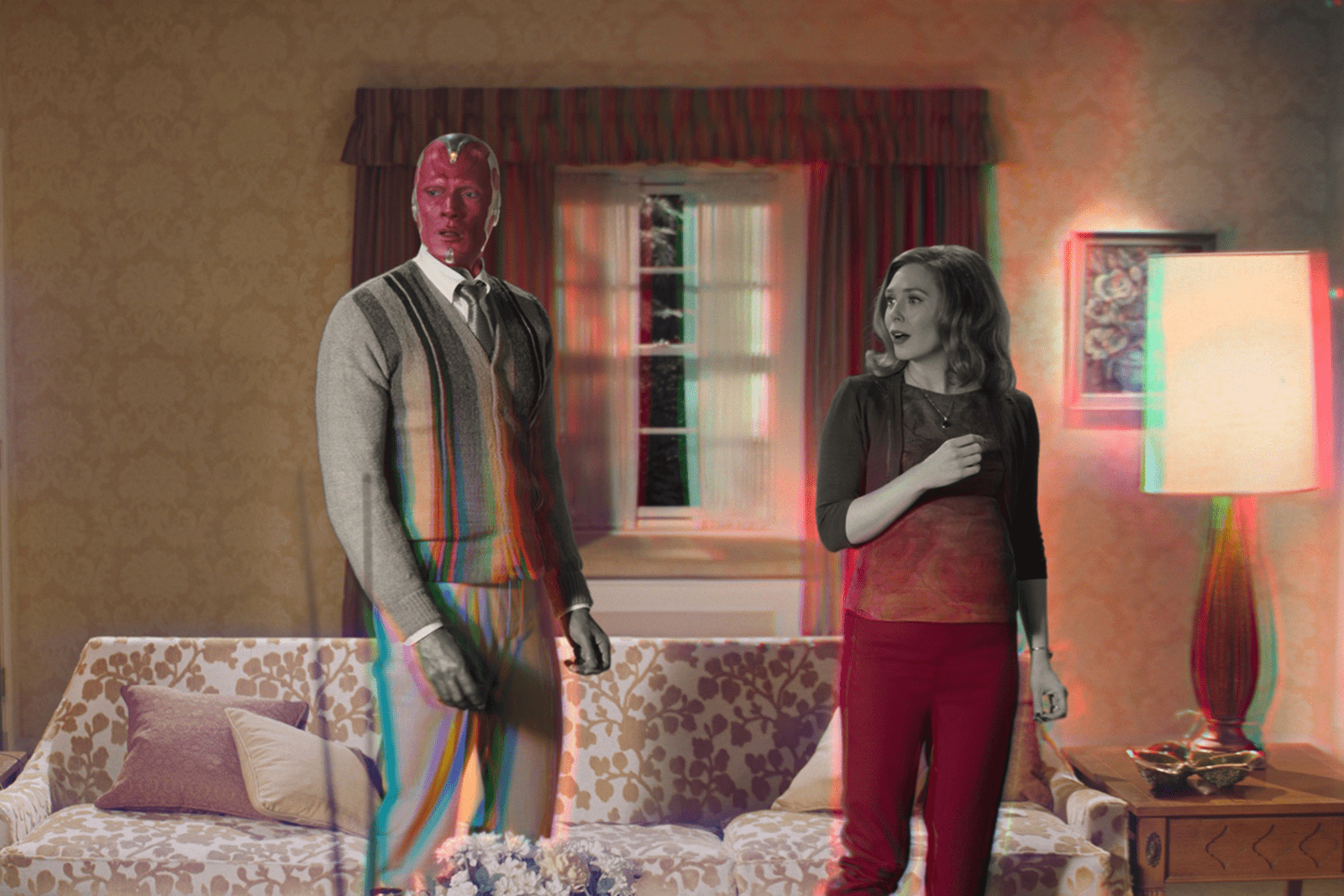 While it started off slow, WandaVision held our interest with on-point characterisation of sitcoms through the ages. The mystery, when finally revealed, was full of twists and turns and intriguing moral questions – like if Wanda was the villain for holding Westview residents hostage.

The series also explored themes of grief in a nuanced, powerful way, all the while giving MCU fans Easter eggs, a cute vision of what could have been and plot development that kickstarts Phase 4 of the MCU. P.S. Remember the mid- and post-credits scenes.

And even for those who know nada about the rich world of Marvel, WandaVision is still a show worth watching. It’s entertaining, gripping, and full of talented actors that bring 2D characters to life. Sure, some references might be lost, but that’s nothing a quick post-binge rabbit hole down Google won’t fix. 😉

Cover images adapted from: Marvel
This article was co-written by Jessica Lai and Ra Krishnan. 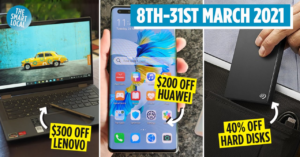