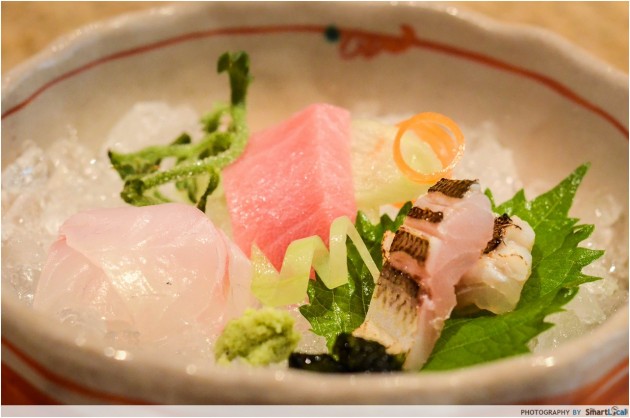 I don’t mean to brag, but I’m winning in this six degrees of separation game – award-winning Chef Hide Yamamoto, who carries the laurels of serving three generations of Presidents, Reagan, Bush, and Clinton, cooked for me too.

Yo Clinton, we homies yet?

Earlier this month, we very excitedly visited Wagakoro Hide Yamamoto, a Kappo-style restaurant serving quality Japanese cuisine. Ingredients are flown in 3-4 times a week from Tsukiji Fish Market and various parts of Japan; the menus change each month in line with their seasonality. 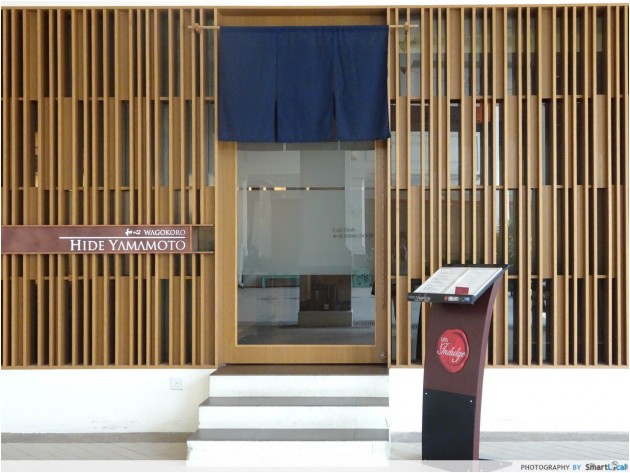 Located by the calming waterside along Robertson Quay, the intimate 18-seater restaurant has a zen woody interior that was pristinely Japanese. We were seated at the bar counter, where we got in on some front row action of the chefs preparing our food right in front of us.

Chef Yamamoto went beyond explaining the dishes and their ingredients, telling us about Japanese culture and his life in Japan – including the days when he was part of a motorcycle gang called, when translated to English, “Kill Everyone”. Sweet. 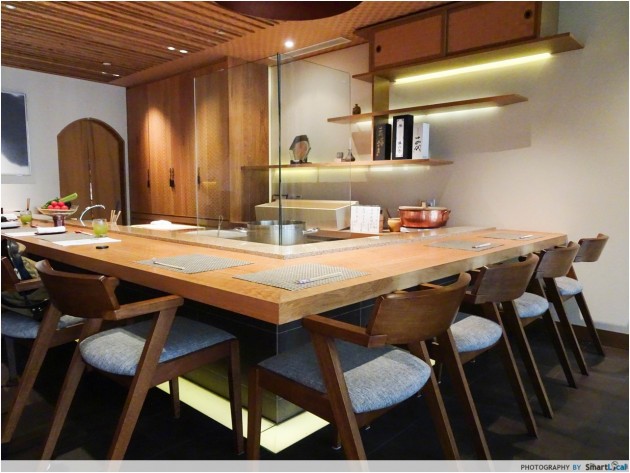 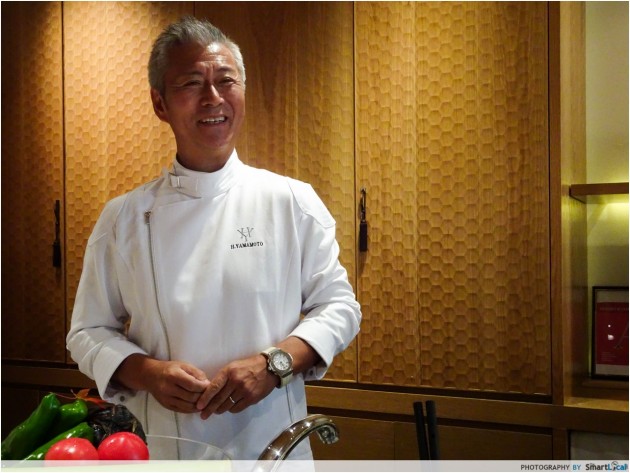 If an 8-course dinner menu sounds tempting to you (How can it not?), read on to find out how it went.

First up was an appetizer of pumpkin mousse with walnut and okra. The savoury and sweet mousse itself was smooth and creamy, well-complemented by the crunchiness of the walnut and okra garnished atop. 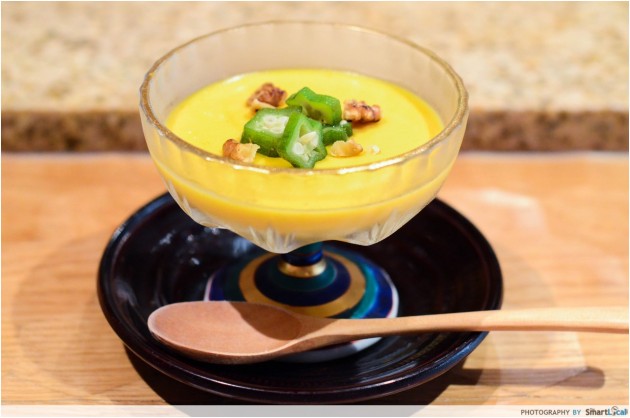 It was pleasantly nuanced in terms of flavour, which is what I look for in an appetizer. Enunciated enough to whet your appetite, yet not too overwhelming that it eclipses the main courses to come.

We were then served a sashimi platter comprising of sea bream, toro (tuna belly) and kamasu (barracuda). The sashimi was reasonably fresh, although for ingredients lovingly air-flown from Japan multiple times a week, I was expecting more.

The toro, though, was a thing of splendor. The sensuous, buttery slice melted in my mouth as it hit my tongue, yielding a gratifying fatty flavour.

Once this dish was brought out, the fragrance of the viscous dashi broth excited my taste buds. 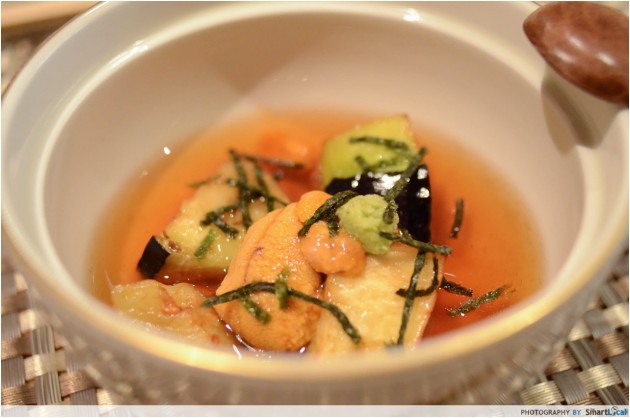 Each spoonful of the eggplant, stewed to softness yet still retaining its natural sweetness, was teemingly coated in the relishing dashi broth. With the touch of uni perched atop, it was a bursting combination of flavours which then gave way to a light, pleasant tingle on my tongue.

Some dishes just have a magical combination of flavours that are absolute classics, and the miso-slicked, pearly black cod is one of them. 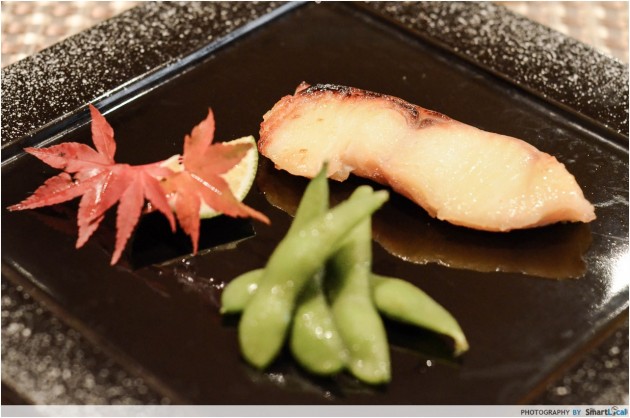 The fish was well-marinated and grilled to a perfect light amber; the fragrant miso thoroughly permeated the buttery yet firm meat. Whilst extremely luscious in flavour, it served to bring out rather than eclipse the umami freshness of the cod itself.

The truffle edamame on the side was a surprisingly agreeable accompaniment – its light muskiness was an artful complement to the savoury-sweetness of the cod. Although marinated with truffle oil, the edamame wasn’t oily at all, but instead retained its delicateness. 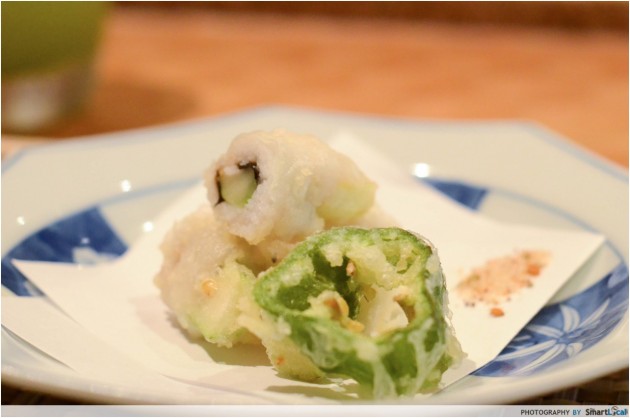 The combination of asparagus rolled in Pike Conger (a type of eel) was rather wispy; despite being tempura-ed, it was still a tad too light and lacked the texture I would’ve liked. Neither was this made up for in terms of flavour, as I thought it was bordering on bland.

The green pepper, on the other hand, was more enjoyable, with just the right degree of nose-tingling tartness.

Whilst conventionally served in a light dashi broth, this traditional Japanese dish of oden was served in a rich yet homely duck consomme, reflecting a fusion of East and West. 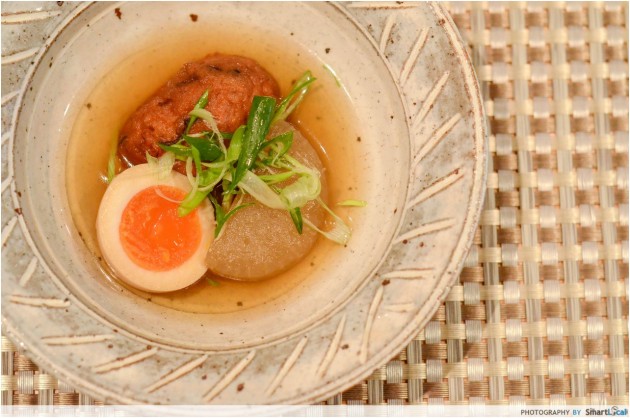 The radish, having soaked up the fragrant broth, was steeped in flavour, making for a refined and pleasing mouthful. Marinated in a soy sauce mixture, the tamago provided a richer surge of oozy goodness. More forgettable was the fishcake, though the combination of these elements was a vibrant play of different textures within a single dish.

All in all, the oden was a scrumptious and moreish dish – one of the stand-outs of the day. 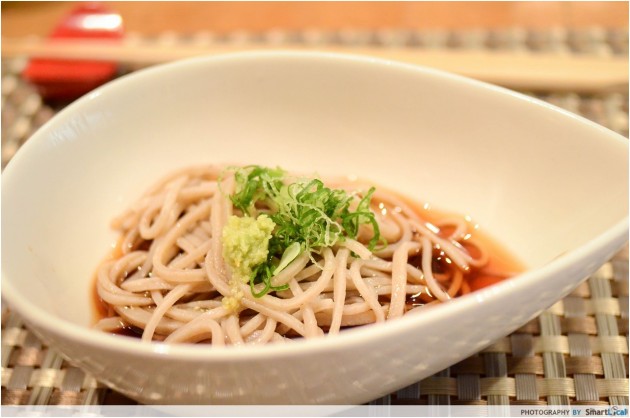 The soba was cooked to be on the firmer side, which I enjoyed. It’s hard for soba to go wrong, so there’s not much else to say about this satisfactory morsel. I liked how this dish was served cold rather than just cool, unlike many other Japanese restaurants.

The dessert was, hands down, my favourite dish of the day. The combination of creme caramel and yuzu sorbet – which I would never have expected to be plated together – worked surprisingly well in cleansing the palate to end off the meal brilliantly. 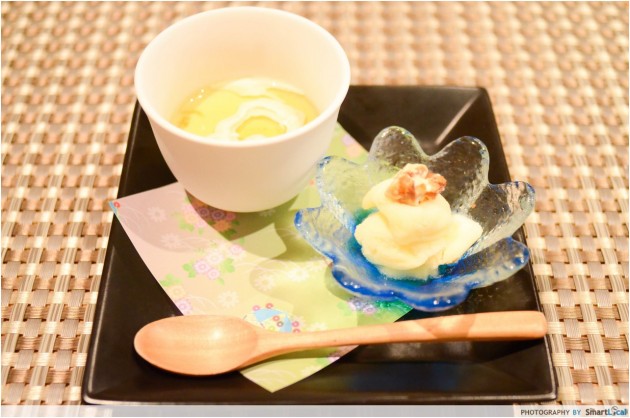 The creme caramel was delightfully sweet without being too heavy; the yuzu sorbet, despite being ice-based, was almost creamy in texture, while still bearing a refreshing citrus twist. The pair was a lush yet dainty dessert.

The portions of each course were comfortably sized, and I left feeling satisfied by the end of my meal.

While the food was good in its own right, I can’t justify the relatively hefty price tag that comes with the meal. It doesn’t help that Japanese food in Singapore is so competitively outstanding, and there are definitely better options out there for such a price point.

That being said, I’m sure you’re also paying quite a bit for the intimate, educational experience – and indeed it was. If that’s your thing, Wagakoro Hide Yamamoto would be worth a visit.

What If Stand-Up Stacey Was Real? We Parody The Best LTA Campaign EVER.
10 Types Of Snapchatters You Follow In Singapore