As someone who graduated from school not too long ago, I remember the university application process being pretty challenging. With multiple documents to prepare, essays to write and even interviews to attend, I barely managed to hit the deadline for the universities I was interested in.

But not everyone has to go through what I did. We got the lowdown on how to ace your university application from Infocomm Media Development Authority (IMDA)’s Singapore Digital (SG:D) Scholarship recipients.

Both took up the IMDA SG:D Scholarship for their undergraduate studies. It covered school fees and provided benefits like networking events with industry leaders, support for students to pursue overseas internships, exchange programmes, and courses outside of school.

Zhen Hao is now a Cyber Security Engineer at Grab. He recently graduated from SIT with a Bachelors in Engineering in Information and Communications Technology, with a major in Information Security.

Jane now works as a Software Engineer at Goldman Sachs, after graduating from SMU last year. She obtained a Bachelors of Science in Information Systems with a second major in Analytics, specialising in Advanced Technology.

Although both Zhen Hao and Jane received their scholarships from IMDA, the SG:D Scholarship allows recipients to choose the organisation they would like to work at, including multinational companies, SMEs, start ups, and the public sector.

The only requirement is that they fulfil their bond in a tech- or media-related role in a company approved by IMDA.

Read on to find out more about the IMDA SG:D Scholarship. 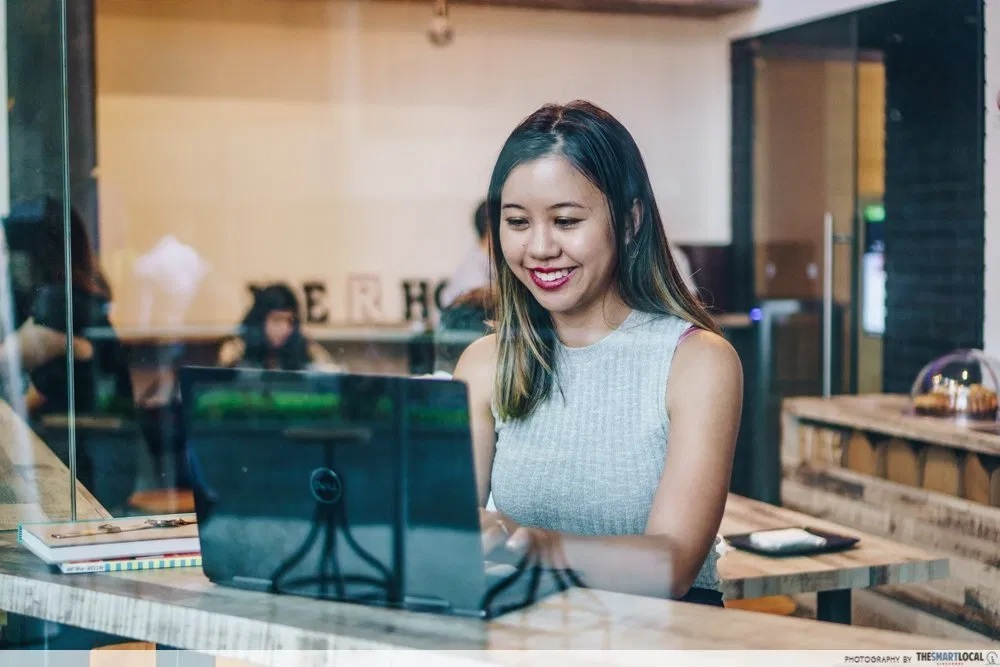 Applying for university isn’t like picking out a secondary school or junior college, where ultimately everyone follows the same curriculum. Rather, your preferred course could set precedence for what you might do for a living after graduation.

But whether or not you’ve identified your chosen career, you can still always start by researching courses offered at various universities.

Zhen Hao, who always had an interest in the cybersecurity sector, didn’t just search for relevant courses, he looked at the modules they offered too. He didn’t want to waste time taking modules of little interest to him, and so sought out courses with modules related to what he wanted to pursue in the future.

Even if you don’t have a career in mind, consider other factors such as what you want out of your future job. For Jane, employability was of importance, so she Googled “top employable skills” to see what stood out to her.

At the top of the list was programming, coding and machine learning. She took it upon herself to try out programming on her own and realised that this was something she could foresee herself doing in the future.

This was despite the fact that she studied arts subjects in junior college (JC). From there, she explored related courses and settled on SMU’s Information Systems degree as her top choice for university.

2. Get interview and course insights from seniors during open house 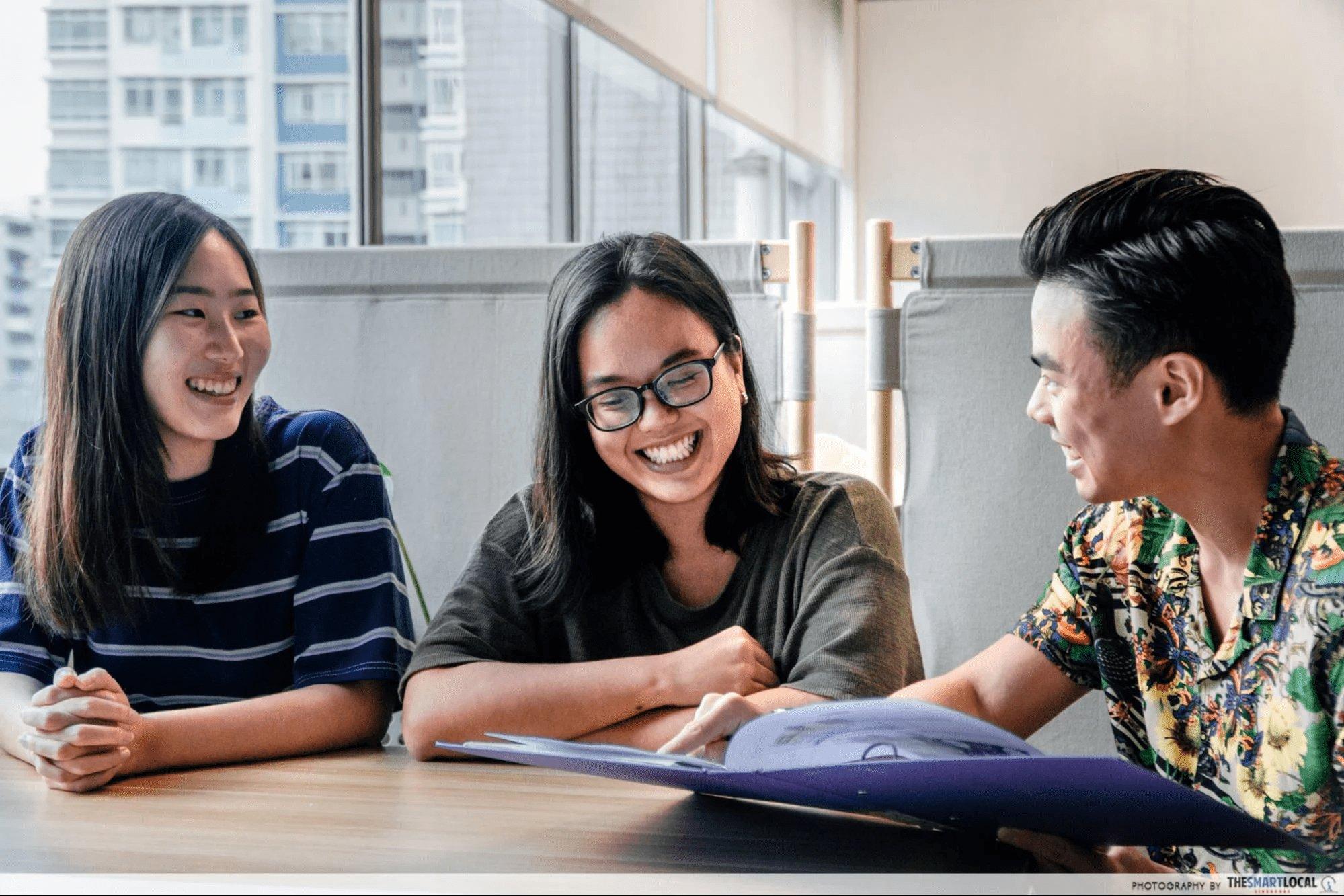 Seniors aren’t just there to tekan (disturb) you during freshman orientation. They’ve gone through the same application process and sat through a couple of years of uni. If anything, they’re your best bet to get the inside scoop on how to nail that application.

You’ll want to ask about things like the interview process and questions that might come up, so you can prep for similar ones during yours. Or, sit them down to discuss what the modules and courses are really like, so you’ll know what to write for your application essays.

Zhen Hao brought up a point on module exemptions made available for polytechnic graduates in university, which he likens to a double-edged sword. “While you can save time and money from an exemption, taking a module you have a strong foundation in can help pull up your GPA,” he shared.

Zhen Hao therefore advises prospective students to speak with their tertiary school seniors attending the university courses they’re interested in. They will be best able to advise whether making such similar decisions during your university education would be a good choice.

If you don’t know any seniors, open houses are a great way to network with them. Jane attended a number of open houses not just to ask about coursework, but to suss out student culture as well.

She felt that she vibed most with other SMU students, and liked how students were assessed on projects and assignments rather than rote memorisation for exams.

3. Provide a reference guide for your referees 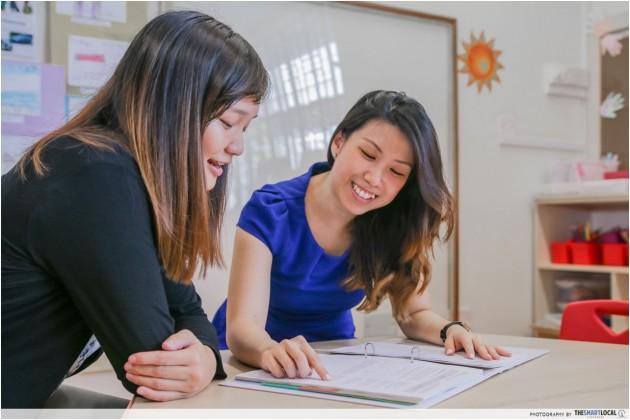 These days, it’s not uncommon for universities to ask for a reference letter to be provided during your application. While the content is important, knowing who to choose to write your letter holds equal weightage.

Referees don’t always have to be of high positions, but more importantly, it should be someone who is close enough to vouch for your character and justify your suitability for the applied course.

Jane asked her music teacher in JC to write her recommendation letter. She was close to her, as she had invested a significant part of her time in JC taking part in competitions and co-curricular activities (CCAs) related to music. Jane, therefore, felt that her music teacher would be able to provide a strong referral which would be personalised to her.

You can also be specific as to what you want your referees to highlight. Zhen Hao listed down the achievements and characteristics he wanted to focus on for a recommendation from his polytechnic lecturer.

He further highlighted for his referee to include his aptitude for IT security, as this was the course he was keen on attending. That way, he saved them the trouble and time of having to comb through records to get the details.

Zhen Hao and Jane recommend a timeframe of two months for the application process and setting internal deadlines for yourself to follow through with each step. Give your referees at least a month to write your letter because they will have plenty of other students’ letters to write as well.

And if your previous schools weren’t local, you should factor in the time needed to mail over your physical transcript. We recommend giving at least two weeks for this

Pro tip: Write your own referral letter – be honest, of course – and get an endorsement from busy referees who may not have the time to write one for you.

4. Avoid fluffy and “PC” answers in essays and interviews 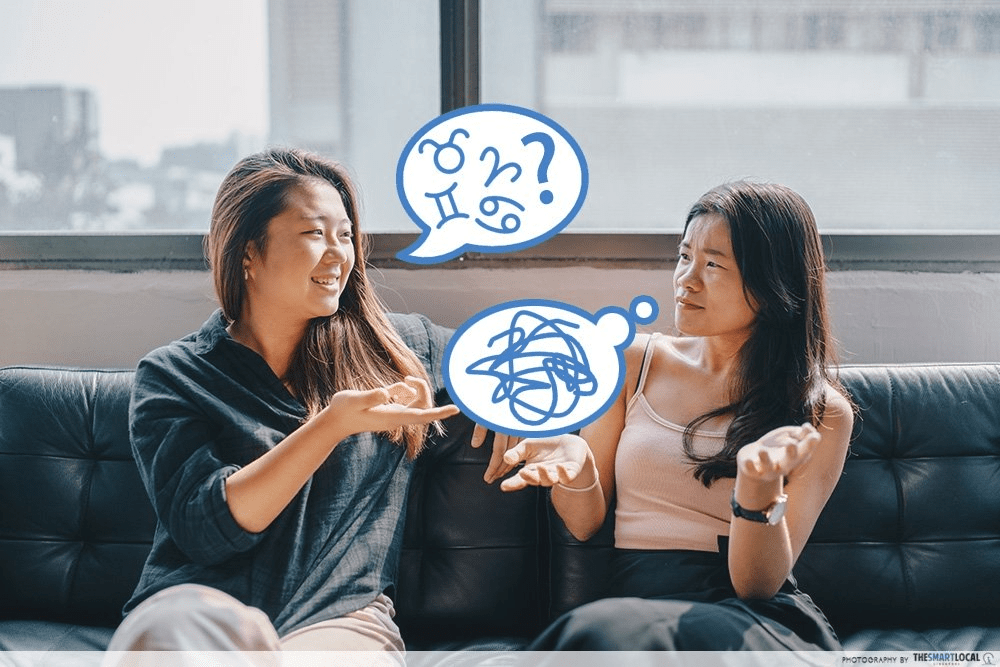 With many others competing to enter the same course, it’s important you don’t lose yourself in a crowd of political correctness. When crafting your essays, save the headache of coming up with a catchy introduction and go straight to the point – state who you are and why you wish to be accepted into the course.

You’ll want to avoid generic statements such as “this course is interesting”. If you’re able to be specific about what interests you about the course, you’ll be able to show that you’ve done sufficient research on what you’re applying for.

The same can be said during interviews. Although Jane did not sit through interviews when applying for university admissions, she went through a similar process for the IMDA SG:D Scholarship.

Both scholarship recipients felt that the interviews were a chance for the panel to pick out who really had a passion for the areas they were studying. They peppered in relevant life experiences that linked them back to their courses.

With Zhen Hao, he was well-versed in some areas of cybersecurity. But when asked by an interviewer if he could speak on another area of IT instead, he admitted to the panel that this wasn’t something he was familiar nor interested in.

He stood his ground on his passion instead of trying to come up with an answer he thought the interviewers were looking for. He felt that they would have been able to see through the smoke if he had given a safe answer, and believes they were more impressed with his honesty overall.

5. Include extracurricular achievements for scholarship applications 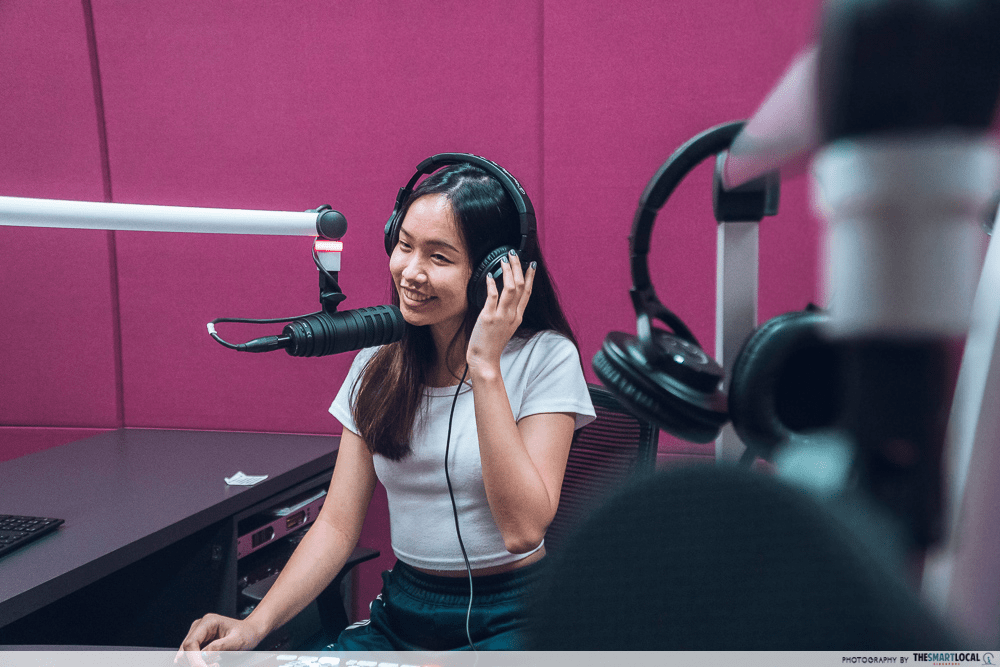 Scholarships don’t just ease financial burden when pursuing further education, but they also provide a wealth of opportunities not commonly available to other university students.

Don’t be put off by the age-old stereotype that scholarships are only for those with good grades. Zhen Hao initially didn’t bother looking into them, while Jane didn’t apply for any for her first three years of her undergraduate studies because both felt they weren’t up to par with their typecast view on scholarships.

But they both believe applying for scholarships are still worth a go, as there are many that look beyond academic performance. Industry scholarships do take into account your portfolio and extracurricular activities you have outside of school as a boost to your overall application.

Jane had personal projects where she worked on various coding languages, as well as her participation in numerous programming hackathons in her portfolio. Zhen Hao also included the IT security competitions he took part in when he was in polytechnic to show how he had applied his learned skills outside of school.

In the end, both of them managed to land the IMDA SG:D Scholarship.

Level up with an IMDA SG:D Scholarship 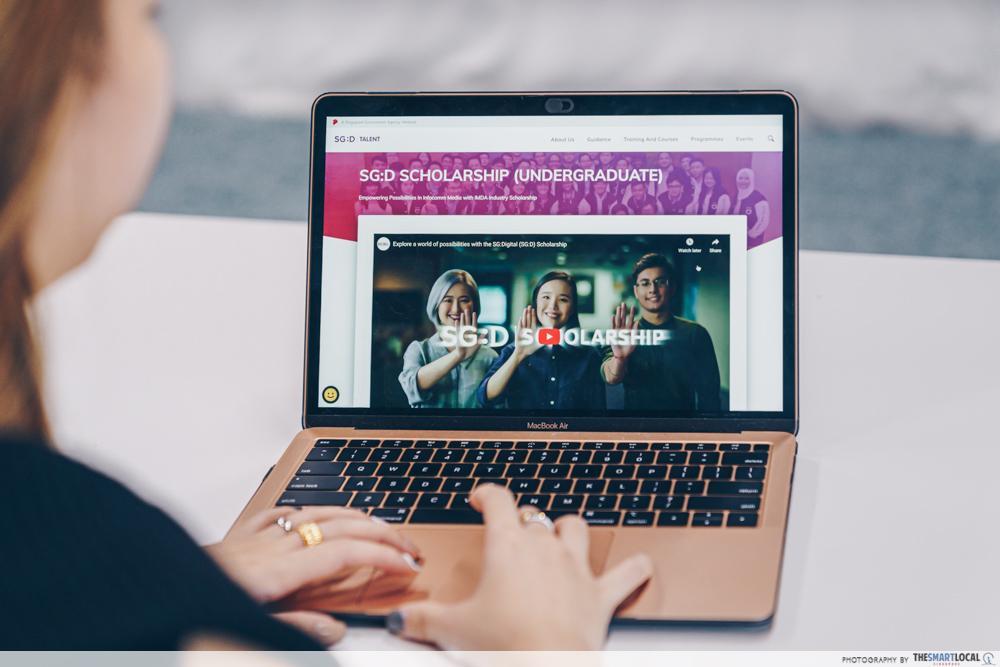 It might be unnerving thinking about university life, let alone scholarships. Afterall, you’re playing in the big league now. To ace university and make the most out of it, consider checking out the IMDA SG:D Scholarship.

While many scholarships come with pre-assigned workplaces to serve bonds at, the IMDA Scholarship allows you to choose the organisation you’d like to fulfil your bond at in a tech or media-related role. So long as the company has been approved by IMDA, you’re free to go wherever you desire.

But the scholarship doesn’t just mean covering school fees and a bond to serve. The programme also arranges opportunities for its scholarship recipients, like providing financial support for students to pursue overseas internships, exchange programmes and even courses outside of school.

They also hold networking events for scholarship recipients to meet with industry leaders, for their professional development. Jane got to meet with chief technology officers from tech companies she was interested in working at.

Zhen Hao, on the other hand, got to go on a sponsored trip to China, where he connected with other like minded scholarship recipients also interested in tech. They’re now part of his support system for work-related matters back home.

The scholarship caters to a number of applicants, which include JC and polytechnic graduates starting their undergrad studies in a tech or media related course, as well as postgraduates who are looking to further their studies with a Masters or PhD.

With the array of benefits, it’s worth giving the IMDA SG:D Scholarship a go if your passions lie in tech or media. And with the university application tips we’ve shared above, you’re well set, not just for a spot in your desired university, but you could also be the next recipient of a boast-worthy scholarship. 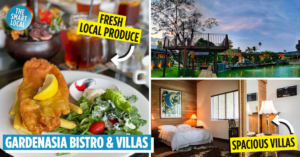 Gardenasia: Spacious Farmstay Villas & Bistro In Kranji For A Countryside Escape In SG
M Social Has Fun Staycay Things To Do Besides Nua-ing In Bed, Like A Self-Photo... 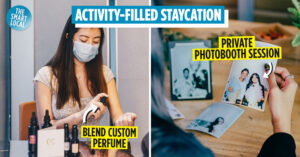