The opening of Tune Hotel klia2

On 31st May, Tune Hotels celebrated the opening of their new hotel at klia2 with a Pyjamas Party. Tune Hotels’ #RoomerHasIt Facebook campaign saw its ten individual winners among the partygoers. They could bring along their family and friends for a sleepover party with a complimentary double room. International bloggers and journalists from Indonesia, Thailand, the Philippines, Singapore, Australia and Taiwan were also flown in to grace the event.

Eugene See from Tune Hotels started off the night, serenading the crowd with a male spin on popular songs such as “Clarity” and “If I Ain’t Got You”. 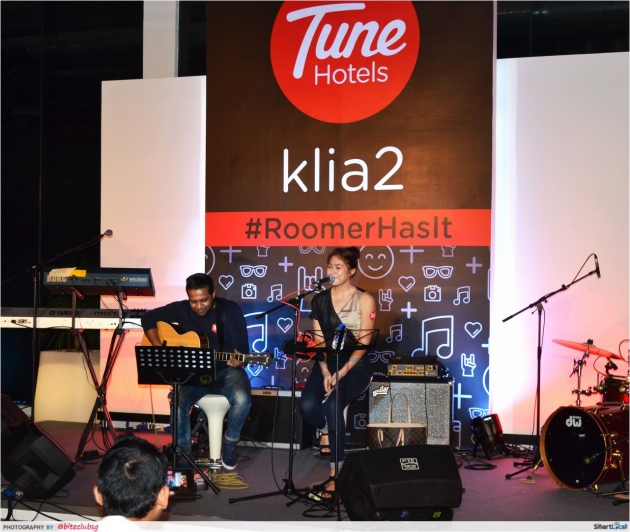 Next up, we had Elizabeth Tan, who gave classics like “The Way You Look Tonight” and “Fly Me To The Moon” a jazzy flavour. She also covered modern songs like “Counting Stars”, “Royals” and a mashup of “Don’t Wake Me Up” and “Demons”. She ended her set with her version of “Havoc” by Joe Flizzow, the crowd-pleasing cover that she uploaded on Youtube and shot her to fame. 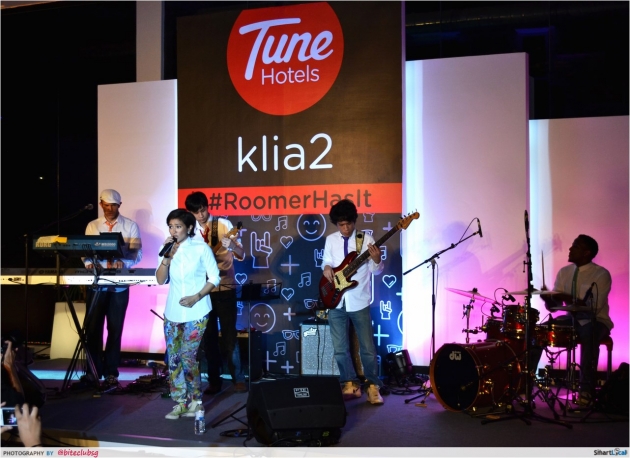 Lastly, we saw Melissa Indot rock out with her bubbly and enthusiastic personality. I was amazed by the seemingly limitless energy beneath her tiny frame. She performed covers as well as some of her original songs, including “Dance”. 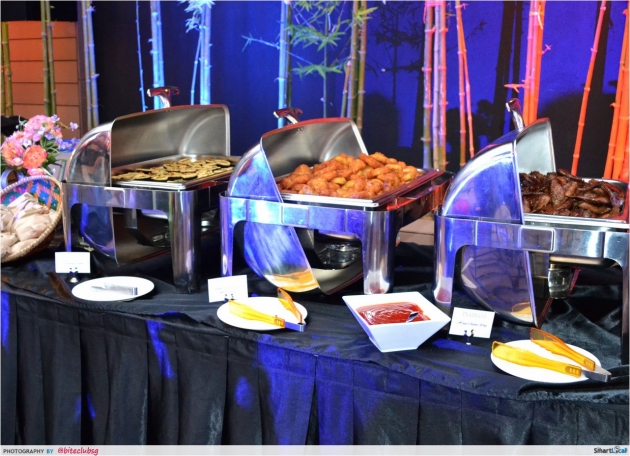 That wasn’t all – there was a dinner spread and mocktails to choose from. 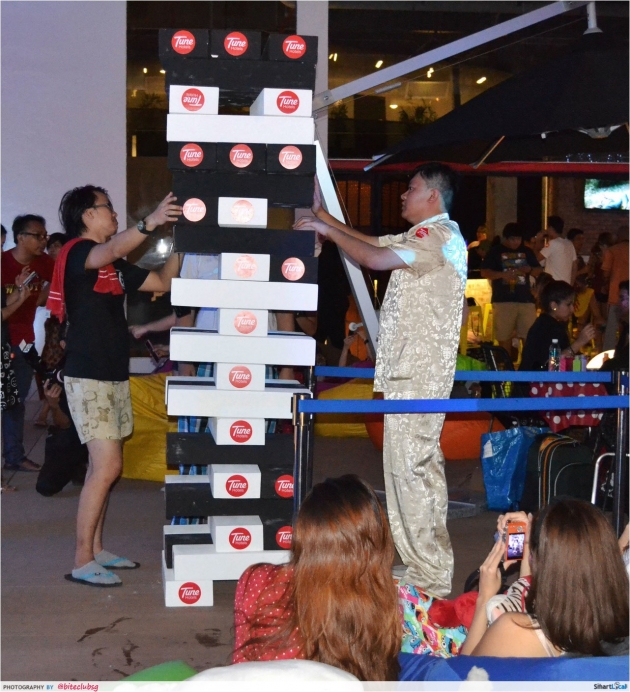 There was even a popcorn booth, face painting booth, life-sized Jenga, and bean bags, which added on to the whole pyjama party vibe.

You could also have your caricature done by the two artists at the party, and take pictures at their photo booth. If you uploaded them to Instagram with the hashtag #RoomerHasIt, you could get them printed at the photo booth! 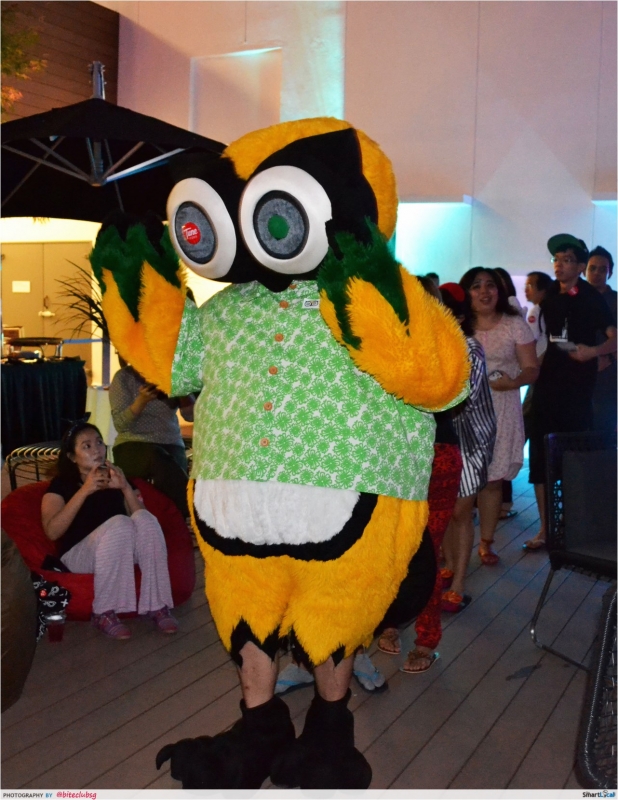 The TripAdvisor mascot also came to join in the fun. 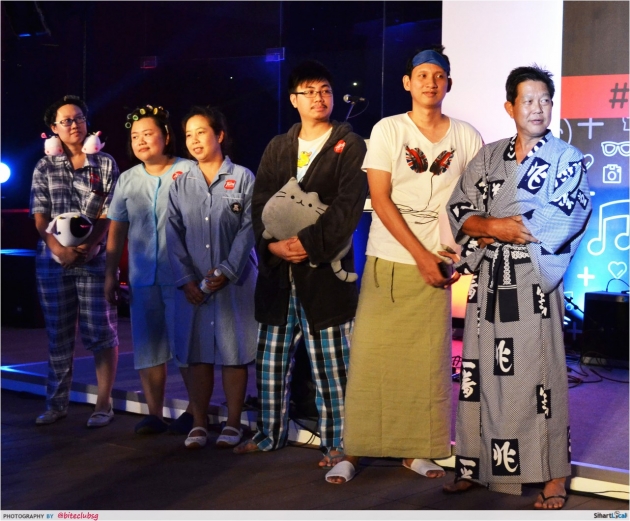 The highlight was definitely the contest for the best-dressed guest in their sleeping garb. The winner walked away with an all expenses paid 5D4N trip to Melbourne, Australia. While we were slightly disappointed that we didn’t win, we still had fun having our caricatures done and taking pictures at the booth. We couldn’t tear ourselves away from the popcorn booth as well. 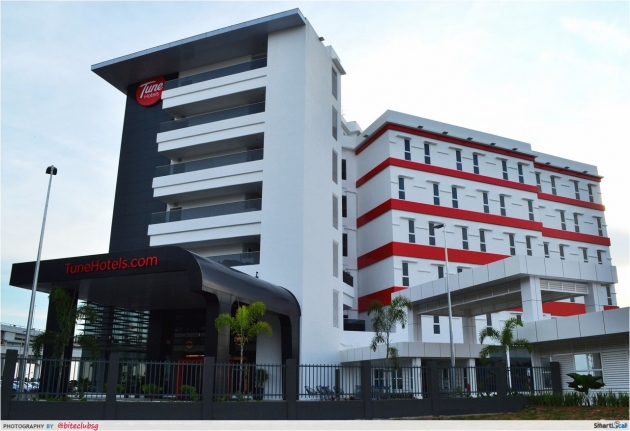 It was just a short walk from klia2, which was really convenient for us, though it took a while to get there after navigating through the mall. Thankfully, the walk to the hotel was fully sheltered. It made the walk so much more bearable than it would have been in the scorching sun. 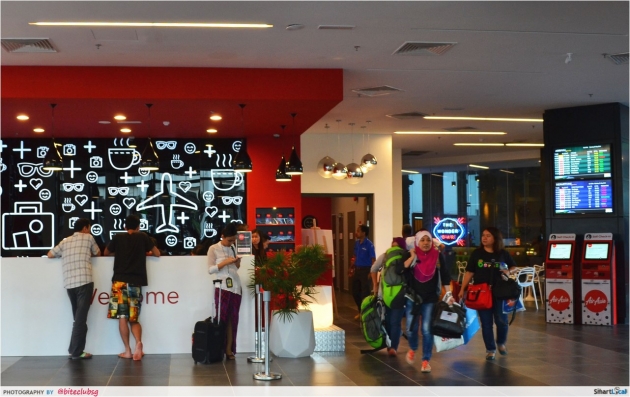 What I really liked was how the experience was simple and fuss-free for guests. When I’m overseas I find myself worrying about my flight timings. Some of us might have had the experience of reaching the airport early, only to realise that the flight has been delayed by hours. I was pleasantly surprised to see a screen at the counter which displayed all the flight information in real time.

We were also informed that they’d be setting up 2 self check-in kiosks. Phew. That would take the hassle of check-in queues off the list. 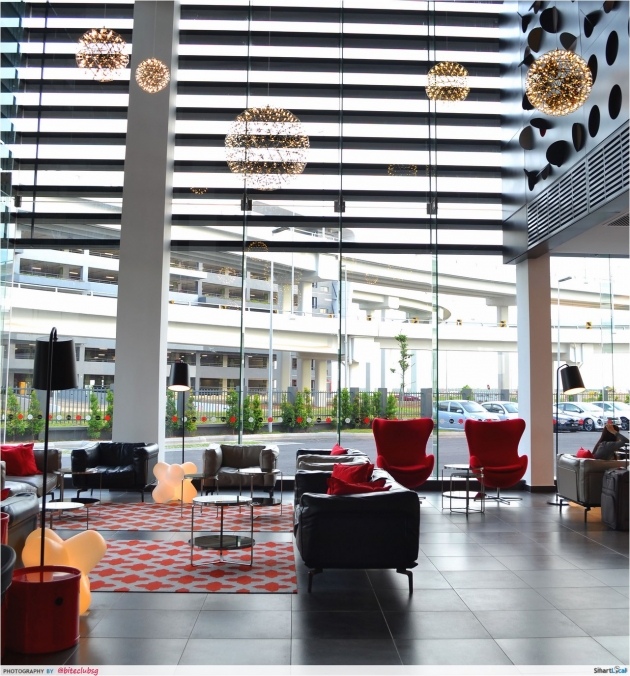 The hotel lobby was so pretty and sleekly furnished that we decided to plop ourselves down to rest and tap into the stable wi-fi connection before going up to our rooms. 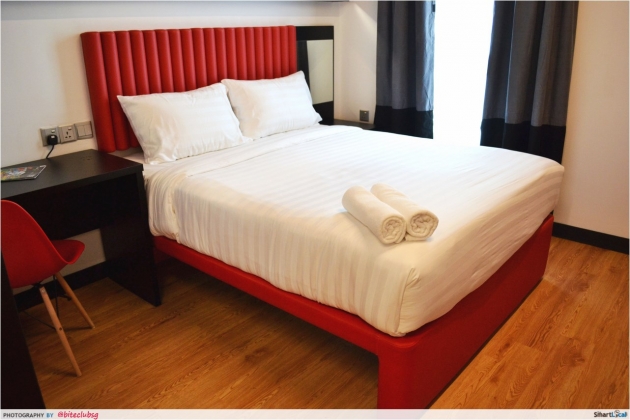 We headed up to our rooms, and realised the walkways actually resembled a science facility of some sort. It felt rather intimidating for a while. The rooms were minimal and basic, and decked out in the hotel’s trademark red and grey.

A note of caution to those with luggage: You may not have enough space for it. There was not a lot of space for us to move about either, but I guess Tune serves its purpose – that is, being a choice hotel for guests who may be here for a stopover or a short business trip.

The bathrooms were also furnished with a minimalistic style. But it was refreshing to have hot water for the shower, since some budget hotels may not even provide that. Soap and shampoo were provided, but if you’re nitpicky about things like these, I’d advise you to bring your own.

They also have a 24-hour restaurant and beverage centre. I was surprised by how The Wonder Cafe on the first floor transformed into The Wonder Bar when we walked past it again at night. The cafe/bar looks out into the open-air courtyard lounge.

If you’re looking for more options, you can always head down to gateway@klia2, the really huge mall that you’d have seen while making your way to Tune. 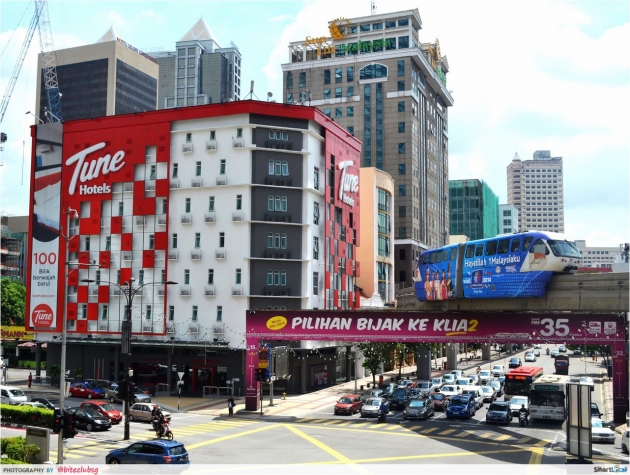 We spent the next night at Tune Hotels Downtown KL. We got there by travelling the way the locals do – by monorail!

We took the KLIA Ekspres, the train which took us from the airport to the city in just 30 minutes. A one-way trip from KLIA to KL Sentral costs RM35 (~SGD14) per person. It was quite affordable considering how quickly we reached the heart of the city. The free wi-fi on the train really made the ride a lot more comfortable! Then we took the monorail to Medan Tuanku Station, where the hotel was just a 5 minute walk away.

We were really excited when we found out that Restoran Kin Kin was just a 5 minute walk from the hotel. You might have seen our Kin Kin Singapore article. Now we can try the original Chilli Pan Mee!

Party-goers may also be pleased to know that Zouk is only an 8 minute drive away. This would be a great place to bunk if you’re planning to hit the clubs. There are a lot of popular malls just a few monorail stations away.

For us, we chose to head to Bukit Bintang to check the malls out and we proceeded to feast at one of KL’s famous food streets, Jalan Alor. We tried the chicken wings from Wong Ah Wah, and we think you should too. Be sure to read up more in our Kuala Lumpur food trail guide.

Tune Hotel rooms start from RM128 (~$50) for a double room, making them an extremely affordable no frills option for budget travellers.

Getting to Tune Hotel klia2

This post was brought to you by AirAsia and Tune Hotels.