Ever since Uber’s exit in May 2018, Grab was coronated as the default ride-hailing service for Singaporeans looking for a ride to and fro places. While it’s still rather convenient and reliable, Grab’s fares have been dramatically marked up, especially during peak hours.

If you can’t count the number of times Grab drivers cancelled on you at the last minute, or you’re still reeling from the time when you had to pay $30 for a short 10-minute trip from your workplace to your home, fret not. These ride-hailing apps in Singapore may just be able to help solve your first world “can’t book a cab without feeling scammed” problem. 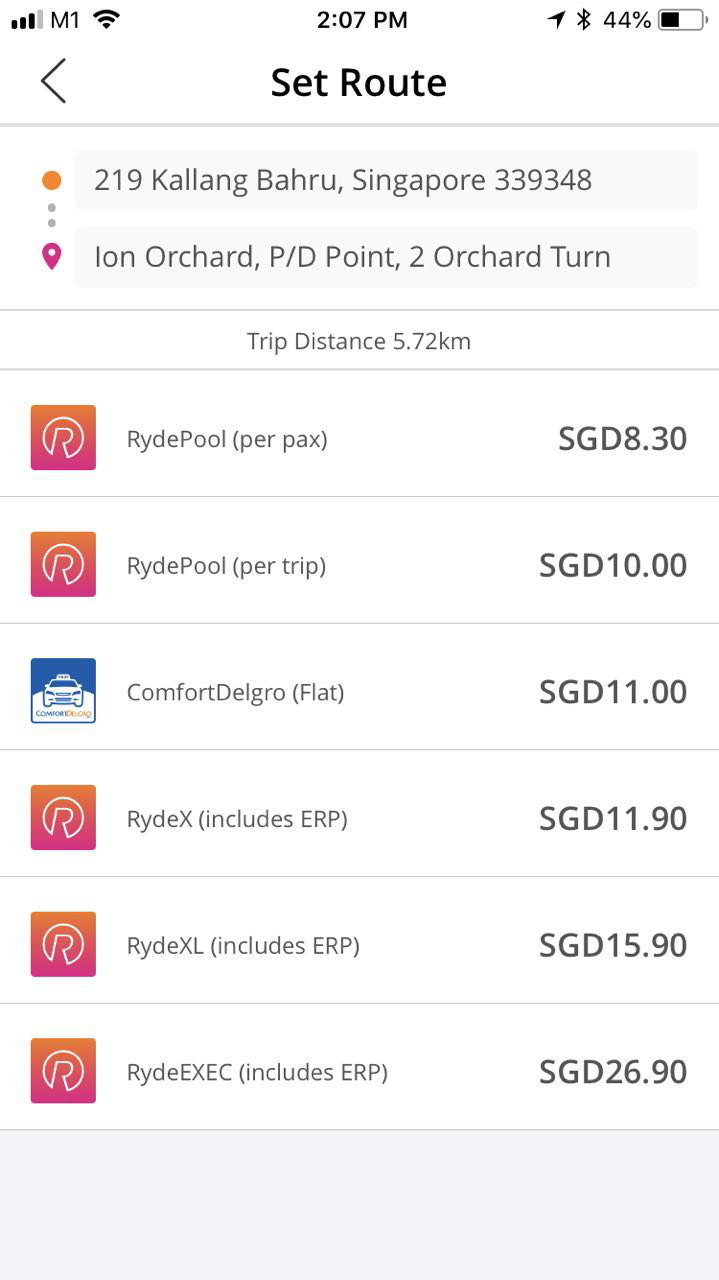 Enter Ryde, a carpooling app which connects you to a driver upon making an advanced booking.

The app shows you the total amount you need to pay before you book the trip. Best part? ERP charges are also pre-calculated via the app’s internal route planning system, so you won’t have to worry about incurring additional costs halfway along the trip. 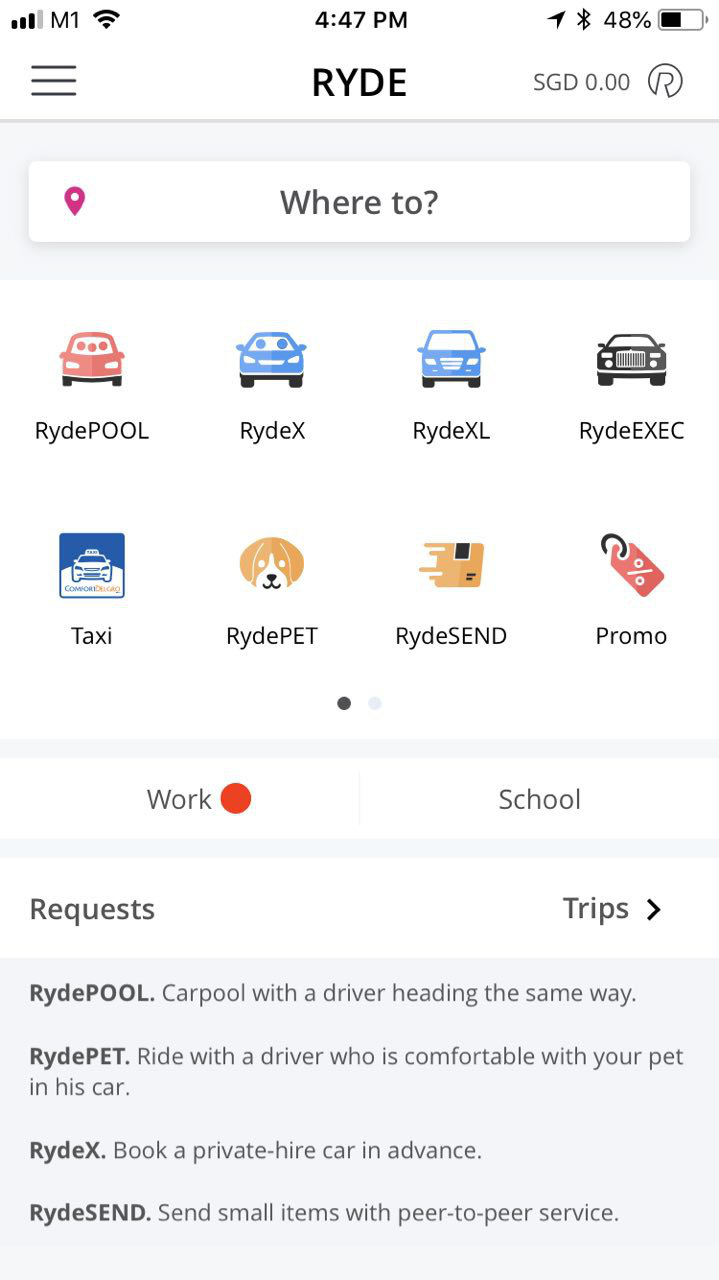 Besides offering the standard point-to-point transportation service, Ryde offers a slew of other services to settle your transportation needs, including but not limited to:

RydeX – Schedule rides for up to 4 people immediately or within 1 week in advance.

RydeXL – Book a car for up to 6 people using RydeXL.

RydePET – Pet owners, you can finally bring your pet to the grooming salon via ride-hailing. The app matches you with drivers who don’t mind having pets in their car.

RydePOOL lets you hitch on your driver’s ride with multiple other riders. You can choose to share the ride with a fellow Ryder to save up to 20% off your ride, or, if you’re uncomfortable with carpooling with other people, you can book the entire car for yourself. 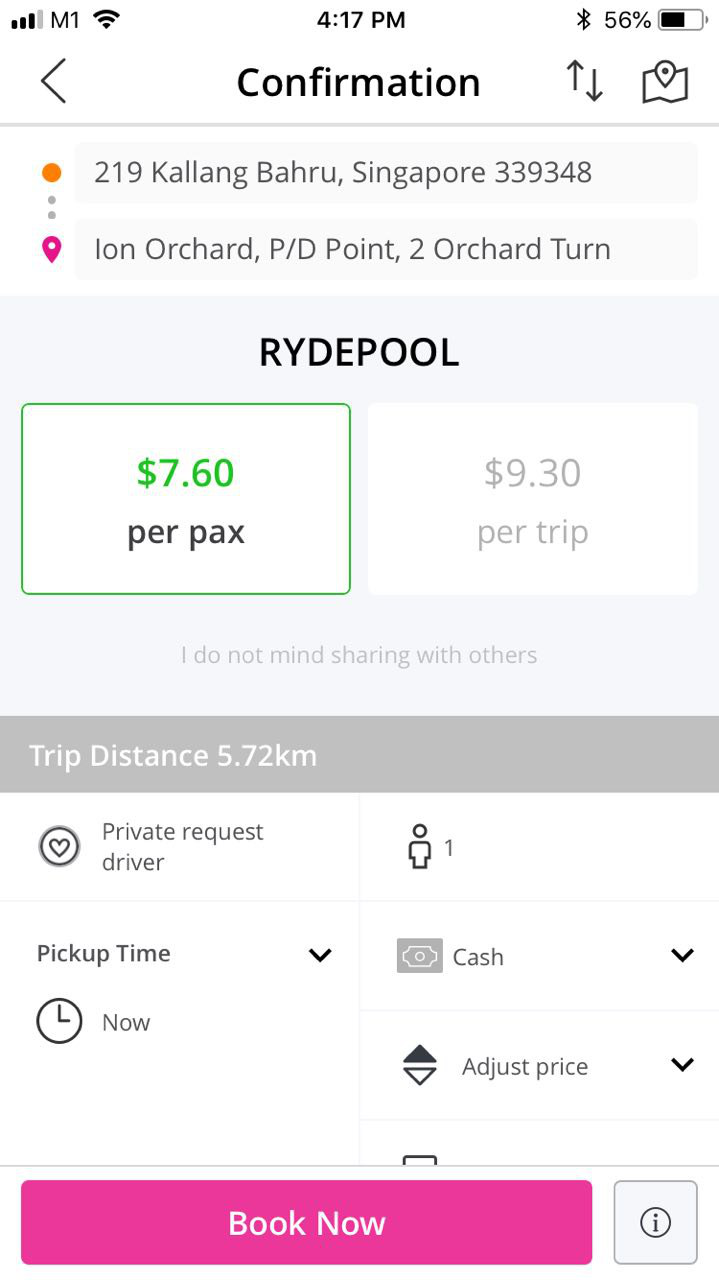 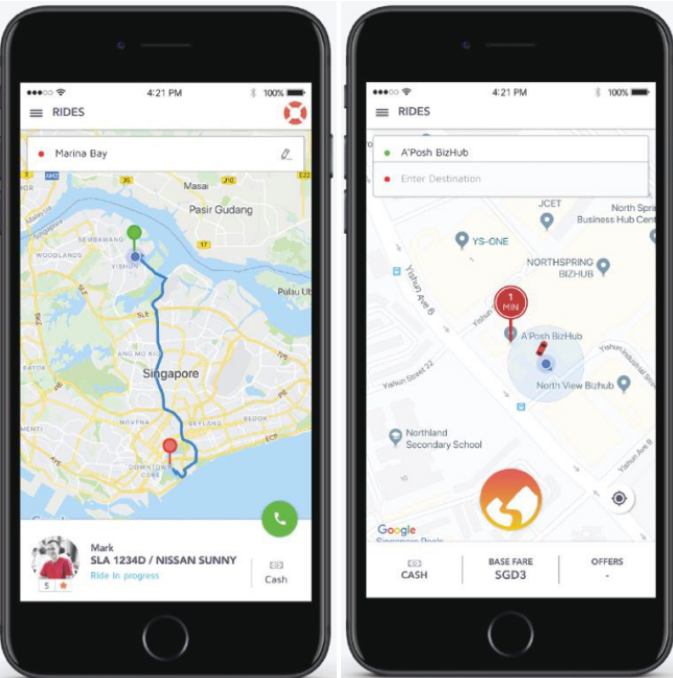 The brainchild of an ex-private hire driver, Kardi is one of the apps which entered the market after Uber’s exit.

Metered fare system
You start off the ride with a base fare of $3, with the total fare of the ride determined by distance – regardless of whether it’s a peak or non-peak hour. The metered fare system is an intentional break away from the trend of dynamic pricing so that fares won’t be drastically hiked up even during peak hours. 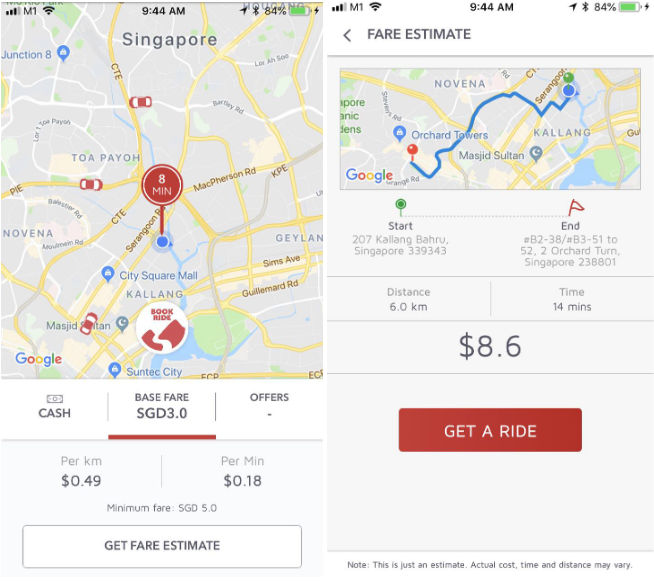 The red icon tells you the time it will take for the nearest driver to reach you.
Image credit: Kardi app

For instance, for a 6km trip to ION Orchard, riders pay $0.49 per km clocked on top of $0.18 per minute on the road during both peak and non-peak hours.

Fairer wages for drivers – better service
10% service fee is drawn from drivers to maintain operations, while the other 90% goes into the driver’s pockets – a significant decrease compared to the 20% commission that Grab takes from its drivers. This means passengers pay a lesser fare for their ride since they don’t have to help the drivers cover commission.

Better wages also contribute significantly to the quality of service of the drivers, since more is at stake when they receive a bad rating. 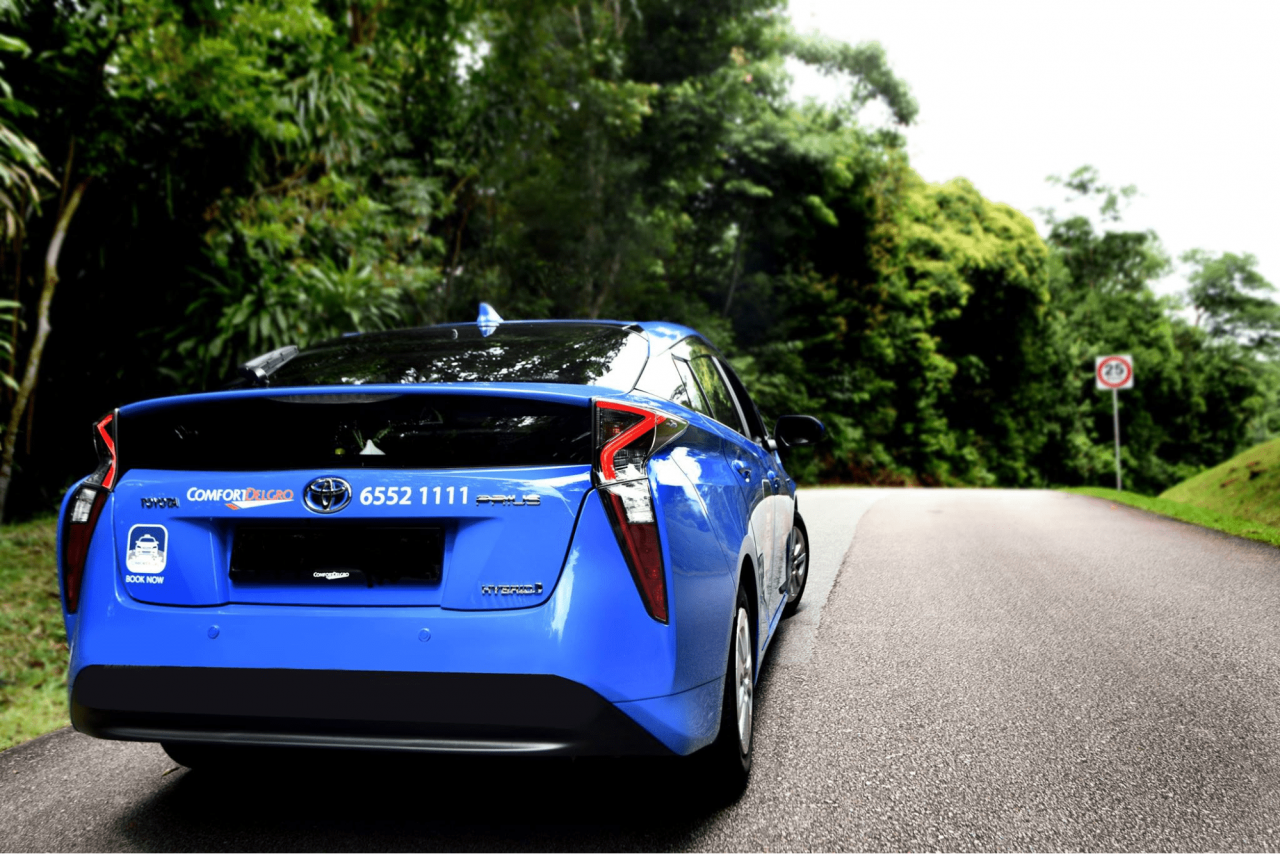 Gone are the days where people can only flail their arms for cabs and watch helplessly as the cab driver zooms past them. OG cab company ComfortDelgro has launched their own booking app so that you won’t have to experience the rejection of cabbies when you’re rushing to get to places. As a rider, you can either choose to take a ride which goes by the meter, or take a ride with an upfront fare. The following tables show the rates for each system.

The metered fare system is a little complicated since the base fares differ by car models.

Their flat fare system works like the other flat fare systems offered by other apps. A perk of using the ComfortDelgro app is that they allow riders to add extra stops at $5 each, so you and your friend can get on the same ride even if you’re going to two different locations.

Launched in late July, Tada is the only ride-hailing app that distinguishes themselves squarely by

Convenient riding options, especially for families with children
The app offers several riding options, including the standard 4-seater and 6-seater. Families with young children can also book a car that comes equipped with either a toddler’s car seat or a booster seat for children. No commission fees
Perhaps the best thing about Tada is the fact that they don’t charge any commission – save for a 3.4% transaction fee that will be deducted from the total fare of each ride. This translates to cheaper fares for riders, since drivers can earn a fair bit without having to charge a premium for the sake of covering commission. Tada charges a base fare of $2.30 and a fixed metered percentage for rides. Instead of adopting dynamic pricing like the other ride hailing companies, Tada imposes a fixed surcharge for peak hours. This keeps dramatic price hikes to a low and ensures that drivers still profit from choosing to pick up passengers despite the mad rush during peak timings.

This company just launched in August this year. As a new player in the industry, they’re still in the stage of sizing up their fleet and fine tuning their app, but you can still book a ride while they’re at it. The app offers a number of ride hailing services like economy, premium, hitch and family rides, as well as some value-added services like a courier delivery service. Urge is using an upfront fare system so the prices that are shown under “estimated fare” are actually fixed fares.

Not much else is known about this app since it’s just an infant startup, but the app offers the most affordable ride to central Singapore by far – $6 for one ride is almost akin to 50% off a Grab ride during non-peak hours.

This Indonesia-based ride-hailing company has plans to expand into Singapore within the coming weeks. While they haven’t officially started recruiting drivers yet, there’s quite a bit of hype surrounding their arrival to our shores – many heralding it as a possible takeover of Uber. We shall see in time to come if they live up to the hype.

In the meantime, you can download the Go-Jek app on Apple and Google Play Stores to get first dibs on their ride-hailing services when they launch.

You shouldn’t have to worry about not being able to get a ride home after a late night. Instead of waiting on a driver who’s more likely to cancel on you in the wee hours, you may want to download these apps so that you can increase your chances of booking a ride. You can even conduct a price comparison for all the apps before you booking to ensure you get the best prices for your transport home. 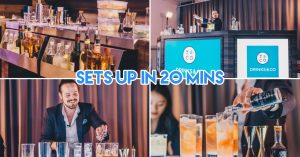 Drinks&Co Has A Pop-up Mobile Bar Service To Take Your Parties To The Next Level
Clarke Quay This Halloween Has VR Zombie Survivals, Costume Contests And Activities For Families 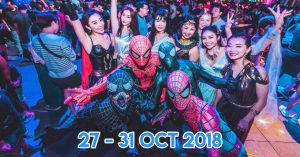