Taiwan’s largest vegetarian restaurant chain, SUFOOD, is all set to change your mind about vegetarian food. This joint venture between Taiwan’s Wowprime and our very own Putien, has arrived on our shores and set up its first outlet in Raffles City.

I was rather skeptical when I first heard “vegetarian food”. I had this impression that it would be bland, and with my notorious appetite, I figured that I’d probably be left scrambling for more food after.

The cutesy pink decor was actually quite baffling. It didn’t feel like a vegetarian restaurant, but it did brighten and freshen up the whole atmosphere. Maybe that was the point.

We met Mr Sebastian Lim, the Vice President of Putien, who very confidently told us that we “definitely won’t miss meat after this meal.” We’ll see.

“Feel the goodness from within”, read their tagline. Your wallet will also thank you for that goodness. $25++ for an 8 course meal is almost unheard of in the most expensive city in the world. 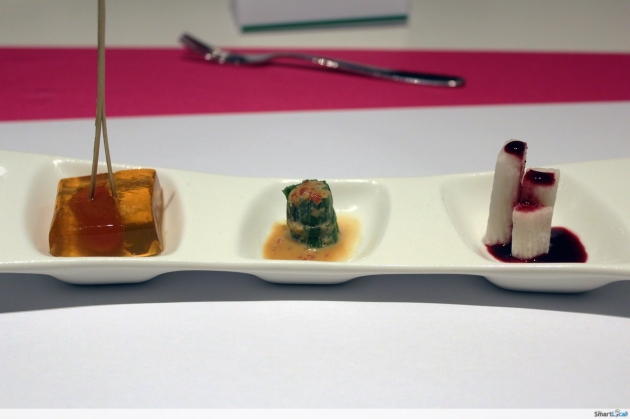 We were first served the appetisers, which were a delightful play of flavours and textures. We were told to eat from “right to left” because the flavours get stronger. We started with the crunchy poached Japanese Yuca root drizzled with a blueberry coulis, then the juicy oriental white water greens and lastly, a savoury cherry tomato jelly – a great combination of the sweet and sour. You can tell that a lot of thought went into the food and the presentation.

Apparently, they employ the “rule of five”. They use 5 groups of vegetables and fruits, which are classified by their colour, so that their food will look “sunny, comfy, tasty, simply, and lively.” These adjectives are matched by the colours yellow, white, purple, green and red respectively, and they really do show on the plate. For example, the yellow group consists of fruits and vegetables such as carrots, pumpkin, and grapefruit. 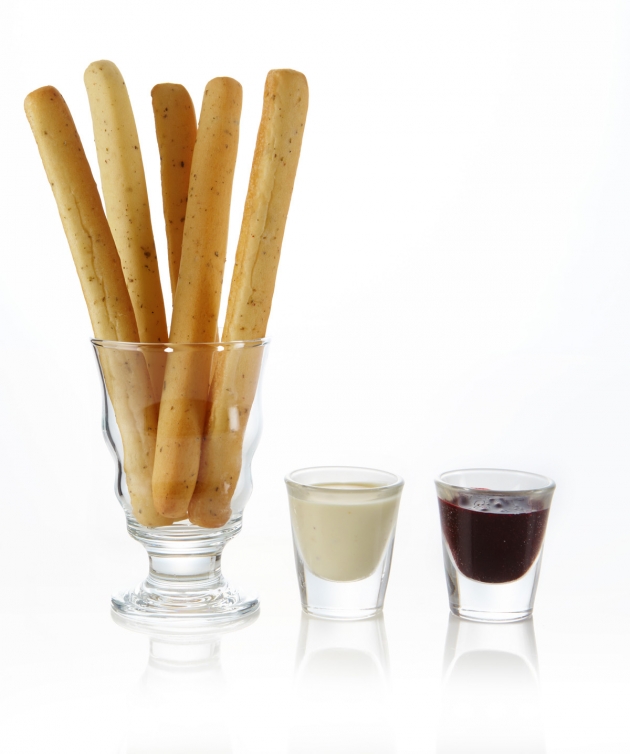 The Rosemary Breadsticks were pretty underrated. We couldn’t stop raving about how good they were. The fluffy insides are really good at mopping up their dips. You can choose a sweet mustard or a blueberry one. Both dips were tasty, but I couldn’t stop dipping my breadstick into the mustard dip. It was tangy and just savoury enough to keep me coming back for more. 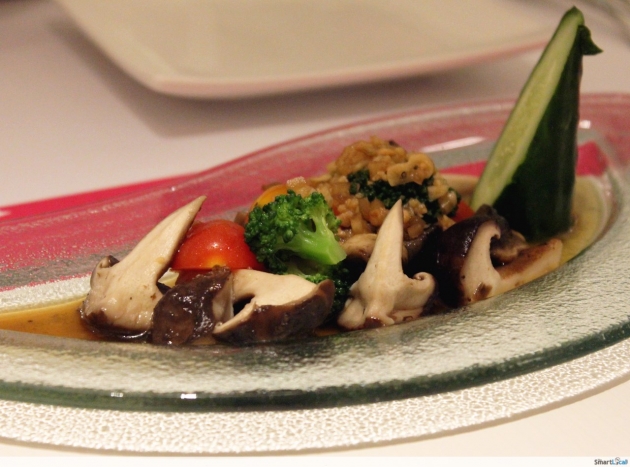 We were told that the Mushroom Salad was very popular among Singaporeans. We suspect it’s something about the vinegar dressing over mushrooms, tomatoes and broccoli, which was reminiscent of our cze char dishes. We wiped the plates clean, by the way – talk about eating clean.

The Tropical Fruit Salad didn’t impress as much. Fresh cubes of fruit for dipping in the blueberry coulis made for a slightly underwhelming dish, compared to all the innovative stuff we’ve been having. It was a sweet and refreshing salad nonetheless. 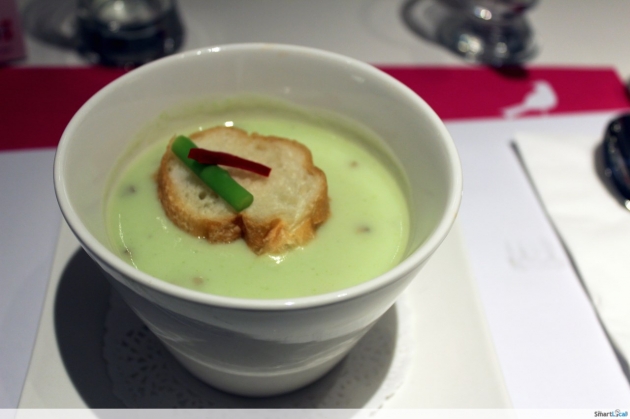 We also had the Mushroom & Pea Potage Soup and Pumpkin Soup. They were extremely filling and the serving sizes are comparable to those at The Soup Spoon.

We expected the creamy Mushroom & Pea Potage soup to be rather bland, but were surprised by how flavourful the soup was despite not containing any meat. I think their blend of mushrooms gave it a rather robust flavour. 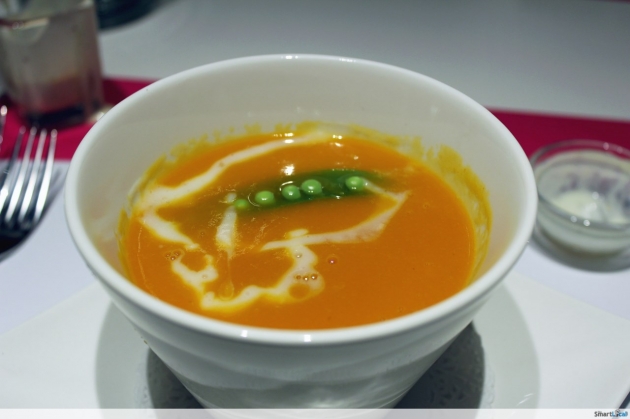 We didn’t like the Pumpkin Soup as much. Even though it was thick and creamy, the taste was somewhat diluted and didn’t deliver the sweet taste of the pumpkin. 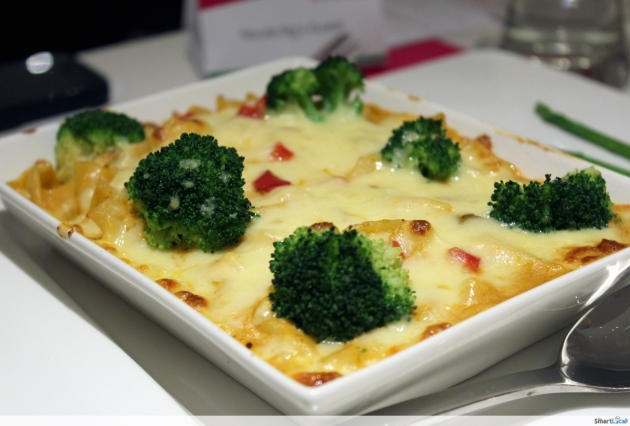 For the mains, we chose the Conchiglie Mushroom Bake. The cheese melted really well into the seashell pasta. The chunks of King Oyster mushrooms and mild curry sauce also gave the dish a little kick to an otherwise normal cheese-baked pasta.

The portions were quite large. I consider myself a big eater, but I only had half the pasta because I was so full from the soup. We were told that the Taiwanese usually finish everything and the portions are just right for them. Don’t be fooled by the meatless dishes – it’s no mean feat finishing everything. 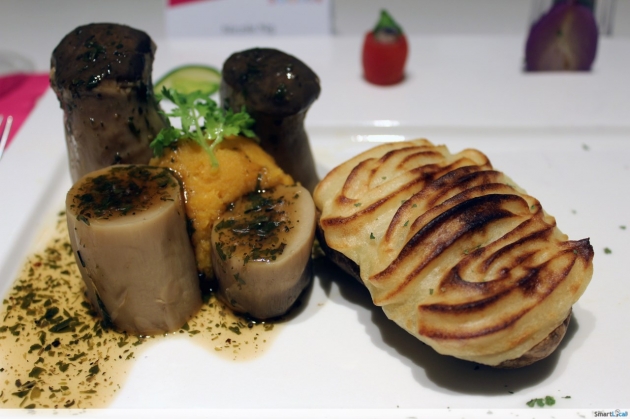 We also had the Baked Potato and Al Funghi, which we absolutely loved. We would definitely go back to order this ala carte! The king oyster mushrooms are flown in from Taiwan and were cooked perfectly, so they were bouncy yet juicy.

The baked potato was also filled with mushrooms and covered in a cream sauce. The herb sauce that was used to cook the mushrooms complimented the earthiness of the dish perfectly. By this time I was beginning to suspect that the King Oyster mushrooms were present in most of the dishes, giving the food that meaty flavour. 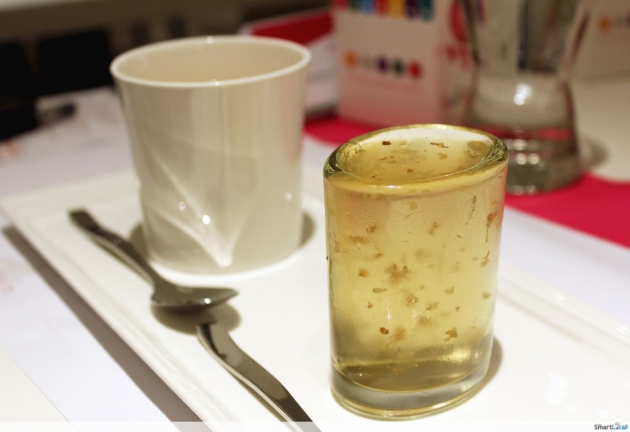 Lastly, we had our choice of dessert and drinks. I had the Osmanthus Flower Jelly for dessert paired with the Yuzu Chamomile Tea. The Osmanthus Flower Jelly was sweet without being too overpowering. I’m quite used to having my drinks as I eat, but it was done differently here. I really like the mellowness of the tea with Yuzu zest, which was a great end to dinner.

For the drinks, you can choose from fruit juice blends, flavoured teas, an eco-friendly black tea, or coffee. 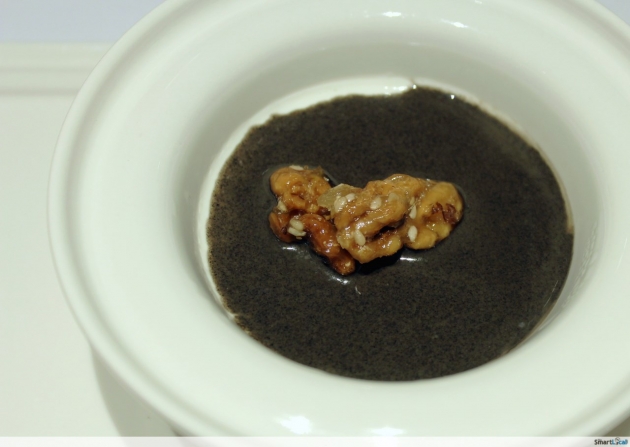 We saw the Sesame Panna Cotta and decided to give that a go too. If you love the milk pudding that you can find in Hong Kong, then you’ll love this. This dessert doesn’t taste like the Panna Cotta that we’re used to having at Italian restaurants, but tastes very distinctively Asian – especially with the layer of sesame paste on top of the actual pudding.

Once the food was served, it was easy to see why SUFOOD was such a hit with the Taiwanese. The Italian-inspired dishes were fresh and brilliantly plated.

I think I would definitely go back to try the other dishes. I’ve got my eye on that Homemade Vegetarian Calzone. It looked too huge and intimidating to be conquered when I was there, but I’ll order it to share next time.

The bill should come up to about $30 per pax after all the charges for the full 8 course meal. You can choose from the ala carte menu as well. The mains cost $12.80 per course; a starter or soup is priced at $5.80, a salad is priced at $7.80, and a dessert or drink is priced at $4.80 per item. From the looks of it, the full eight courses are definitely more worth it.

SUFOOD has done a great job in differentiating themselves from other mid-ranged restaurants with their great service and the quality of their food. For strict vegetarians, you might want to note that they do use onions, garlics, chillis and dairy products. But you can request vegan meals if you need to.

Did we miss meat? Nope. Maybe we were too full to even think about having any meat.