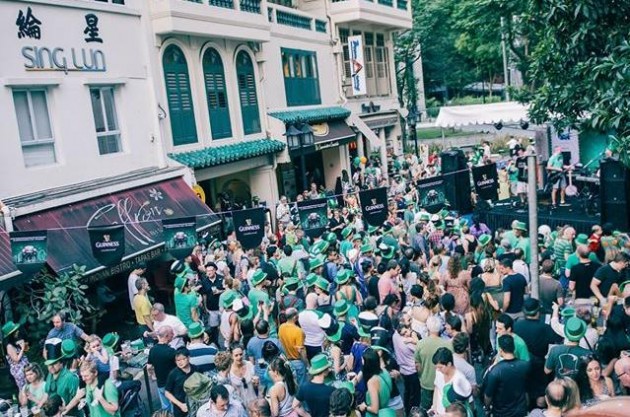 What’s so good about the month of March? When I was a kid it was the week-long school holidays, but as an adult, well, the answer is St Patrick’s Festival .

While St Patrick’s Festival is seen as a predominantly Western celebration, there’s no reason we Singaporeans can’t join in on the fun. The Singapore River is transforming into a sea of green with the St Patrick’s Street Festival on 19 & 20 March, and there’s a ton of cool stuff happening.

Before you head down for a weekend of revelry and laughter, here are 8 interesting facts about St Patrick’s Festival – the party of the year. 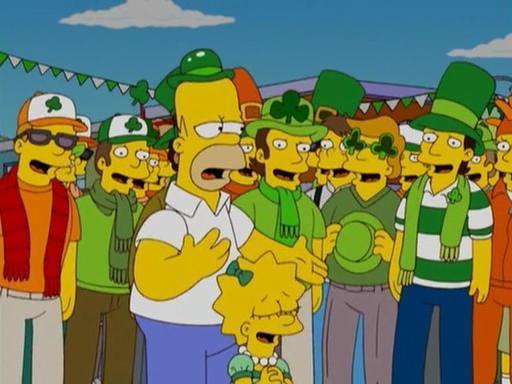 St Patrick’s Day is an Irish festival, celebrating an Irish saint, so the party must have started in Ireland, right? Wrong.

The very first St Patrick’s Day parade was held in America, and probably brought over by Irish immigrants. Also, St Patrick wasn’t actually Irish. He was born in Britain, but after becoming a priest he spent most of his life in Ireland, converting its inhabitants to Christianity.

Plus, there’s a belief that if you wear green on St Paddy’s Day, you won’t get pinched by a naughty leprechaun. If your friend shows up in a red shirt to celebrate at Boat Quay, you know what to do.

2. The Guinness drinking etiquette is a thing

“Simi drinking etiquette? Just drink lah!” If that’s your immediate reaction to reading the header above, I understand your feelings, but hear me out.

Guinness is something quintessentially Irish, and yes, there is a secret code to follow that’ll make you an honorary Irishman for the night. 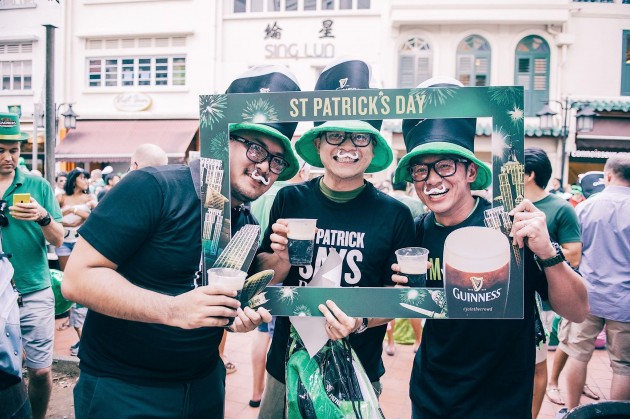 First of all, be patient as the bartender pours you your pint. The method of Guinness pouring is that ¾ of a pint is first poured and left to stand, before topping off to the brim. Such is the iconic Guinness Draught 2-part pour. It’s a tradition to have that ‘ritual’ performed before your eyes in Ireland, so don’t mistake it as a half-done job!

Then all you have to do is wait for the liquid to surge to take on its trademark dark colour, and voila! Your Guinness is ready for you. Don’t forget to include #GuinnessTache in photos of creamy beer staches on your upper lip. Raise your pints, drinkers. To Arthur!

Did you think St Paddy’s Day was just about the stout? Think again. 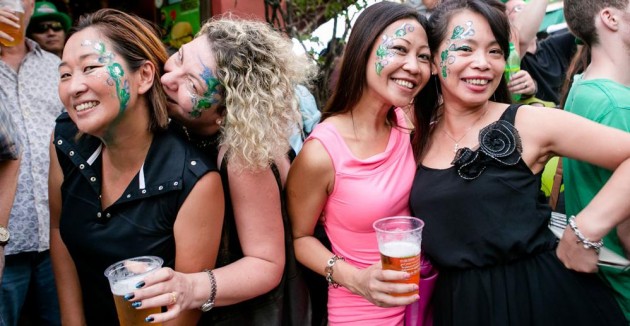 Kick off the celebration by painting yourself green! While there’s no need to look like the Incredible Hulk, you can still transform into a glitzy leprechaun with booths offering up face-painting, airbrush tattoos, and even hair-spraying along our very own Singapore River. If you ever wanted to know what you looked like with green hair, this is your chance.

Best of all, St Patrick’s is a day for you to just let your hair down and make merry! Forget about learning that new K-Pop dance – why not try your hand at Irish step dancing?

Stand tall and proud, your shoulders back and down, with your forearms glued to your sides. Cross your feet, then… well, if you manage a hop and skip, you’ve already got me beat! You’re probably better off just watching the girls from the Irish Inspirational Dancers group strut their stuff, but there’s no harm in giving it a shot.

You can also treat your ears to traditional Celtic music – you might be standing in the middle of a crowded, green-clad festival, but hearing the soulful tunes will transport you right into a fantastical medieval scenario and send shivers down your spine in a totally good way.

All in all, let your hair down and have fun. Like all festivals, the key ingredients to a great St Paddy’s Day are friendship, food, and lots of laughter.

4. St. Patrick’s Day is more than just booze – it’s about food too!

Most people associate Irish cuisine with potatoes, cabbage, and corned beef, but there’s so much more to it. Think hearty Irish stews and Fish & Chips fried in beer batter. I’m drooling already. 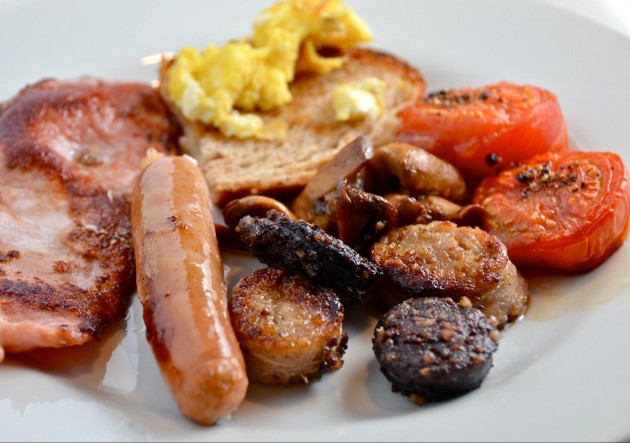 This is what we call a Full Irish.
Source

Do you remember a time when pig’s blood was a common fixture in our pig’s organs soup at the kopitiam? We don’t have that anymore, but the Irish equivalent of black pudding – a pig’s blood sausage – comes pretty close. 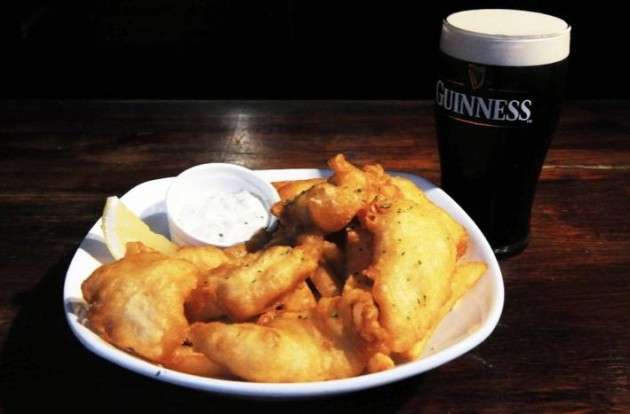 Irish food promotions are abundant during this time of year. Singaporeans are incredible foodies, and we’re always game to try out new cuisines. Most of us are familiar with the usual French and Italian fare, but European food doesn’t just consist of pizza, pasta, and steaks.

Take this opportunity to try culinary delights from a foreign culture a try, whether it’s an Irish Burger with a pint of Guinness ($20) at McGettigan’s, or Guinness-infused Beef Skewers ($36) at Fabrika @ Klapsons, The Boutique Hotel. Yum.

Check out the complete list of food promotions here.

5. And Irish tunes by contemporary local and Irish bands 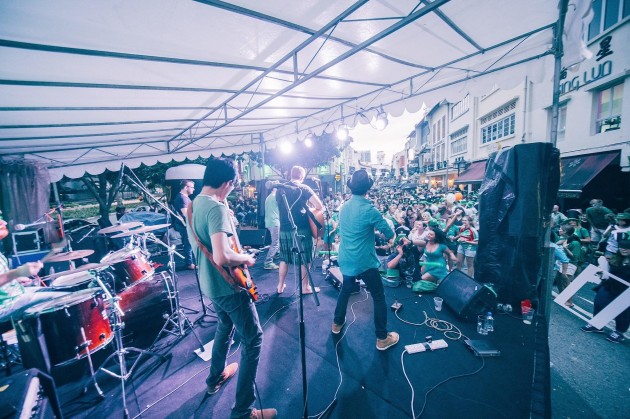 Get the festival spirit going with performances from both Irish and local bands – they’ll be performing Irish tunes injected with their own twist, and maybe even a uniquely Singaporean touch. Be sure to catch local band 53A at Timbre @ The Substation on 18 March! 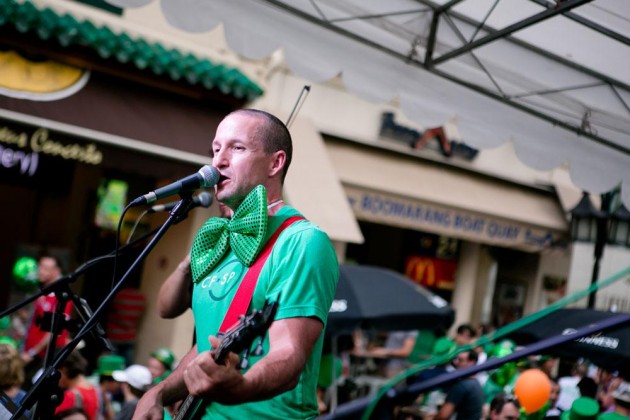 Head down to McGettigan’s to catch Gan Ainm, Singapore’s #1 Celtic band, as they deliver both traditional and contemporary Irish folk music, and be sure not to miss Hermitage Green, one of Ireland’s most prominent folk acoustic bands. 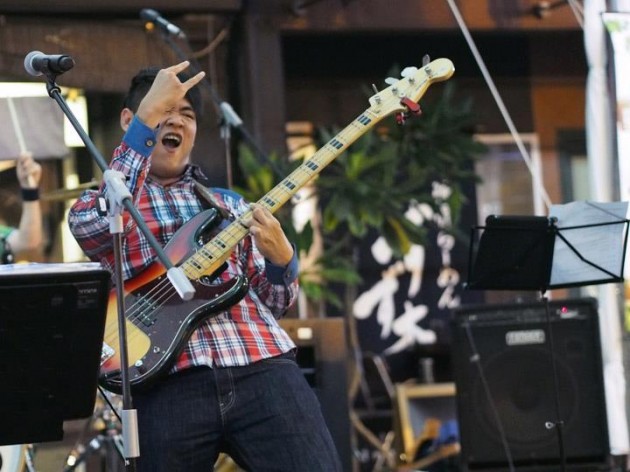 During the festival itself, don’t miss local musicians Trad Collective and Rock Rosettes, and Singapore’s Irish bands The Craic Horse, The Disclaimers, and Lounge Out Loud for a musical extravaganza.

For the full lineup of performances, check out the St Patrick’s Festival website.

6. Watch top chefs vie for a spot in the World Oyster Opening Championships 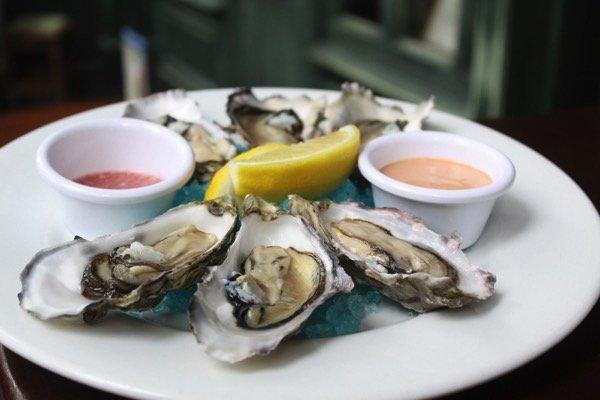 I love oysters. I can often be found skulking around the seafood section of any buffet, waiting for the moment they refill the shellfish platter, or in the queue of a famous orh luak stall.

If you love oysters as much as I do, then here’s an interesting fact for you: oysters are the best-kept secret of the Emerald Isle. They’re as Irish as beer and potatoes!

With that being said, kick off the St. Paddy’s festivities with an Oyster Shucking Competition at Muddy Murphy’s!

Accompanied by live Irish music and scrumptious Irish food, witness top chefs compete against one another as they attempt to shuck 30 oysters in the shortest time possible. They’re all vying for a spot to compete in the Galway International Oyster and Seafood Festival’s World Oyster Opening Championships, held every year in Ireland, so you’re witnessing masters at work. 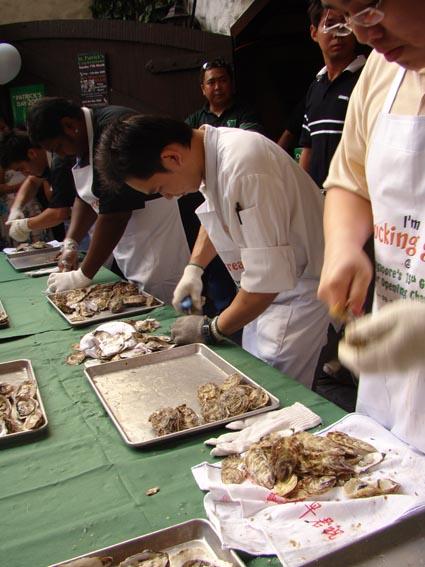 And if you want to get in on the action, why not try your hand at shucking oysters? In groups of 3, demonstrate your skills and maybe win some attractive prizes. May the odds be always in your favour!

7. It’s not just for expats, but a one-of-a-kind experience for Singaporeans 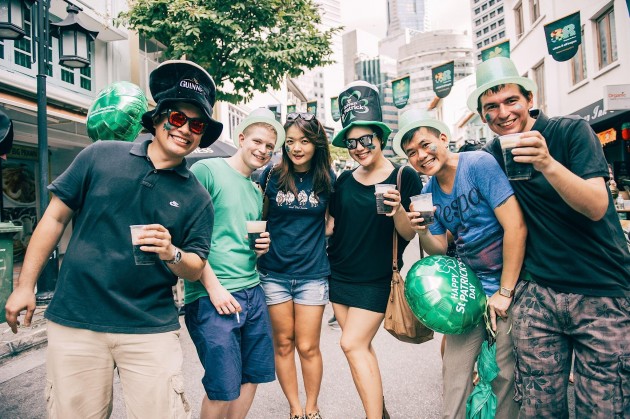 Most assume that St Patrick’s Day is a celebration only for angmohs. Most are therefore wrong. You may not know much about Ireland or St Patrick, but you’ve probably loved countless things Irish without knowing it. Westlife, U2, Kodaline, The Script, The cranberries, Boyzone, Hozier, Damien Rice…the list goes on. 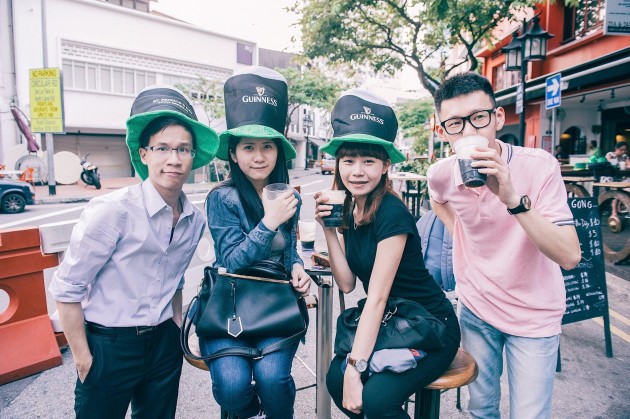 In multi-racial, multi-religious, and multi-cultural Singapore, there’s nothing to stop you from joining in the fun. Dig out that green dress you swore you’d wear one day, but never got around to, or head down to the Singapore River for an awesome afternoon of great food, music, friends and of course Guinness!

Pop into a pub for a pint of Guinness and a night of good company, or sample Irish dishes that you’ve never heard of to expand your dining worldview. Besides the Irish pubs in town, you can also immerse yourself in the festivities at other places like KPO, Bluemist and Balaclava. Who knows, maybe you’ll leave with some new friends. 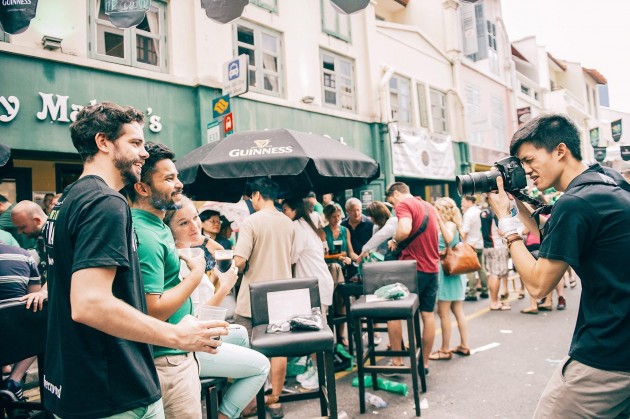 Best of all, grab your buddies and fall in for the annual St Patrick’s Day Parade March. Founded 12 years ago, the parade involves people from all walks of life all decked out in their St Paddy’s finest.

St Patrick’s Day is a global celebration, and Singapore’s a cosmopolitan city – grab your green shirts and track down some shamrocks, it’s time to have a blast. 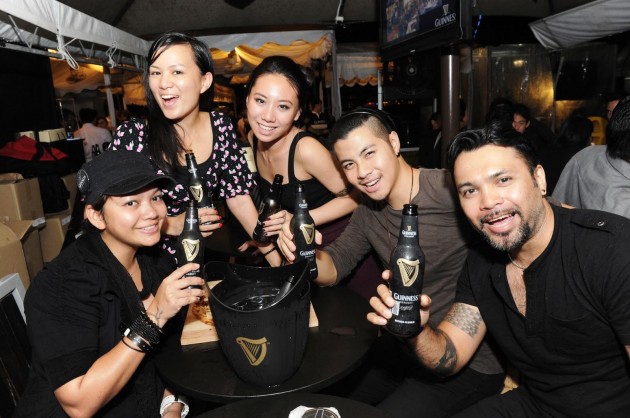 Do you remember your school giving out Yakult when you were little? Well, now that we’re all grown up, here’s a giveaway you won’t want to miss.

Unofficially the national beverage of Ireland, Guinness graces St. Patrick’s Day celebrations anywhere and everywhere, year after year. They’ve decided to give away 20,000 pints of Guinness Draught this St. Patrick’s Festival (limited to one redemption per person). 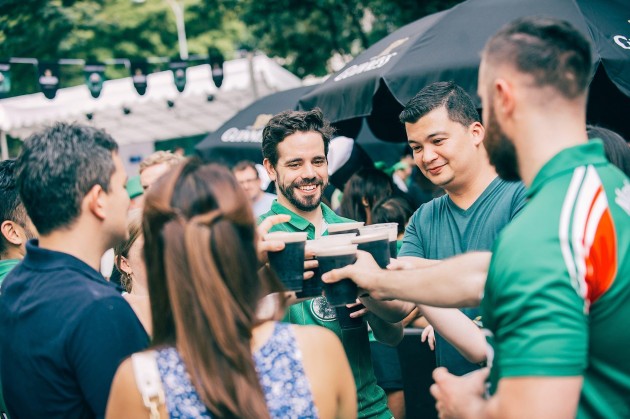 Sounds too good to be true, but it’s happening, and here’s how you can get involved:

It’s as easy as that – go for it while stocks last! Now go forth and make merry.

Update: All 20,000 pints of Guinness have been registered! Remember to make your redemption by 20th March.

The ultimate party for everyone

Young or old, local or tourist, St Paddy’s Day has something for everyone. This annual festival, organised by people of different nationalities, is a celebration of the ties between Singapore and Ireland, a toast to an international friendship. 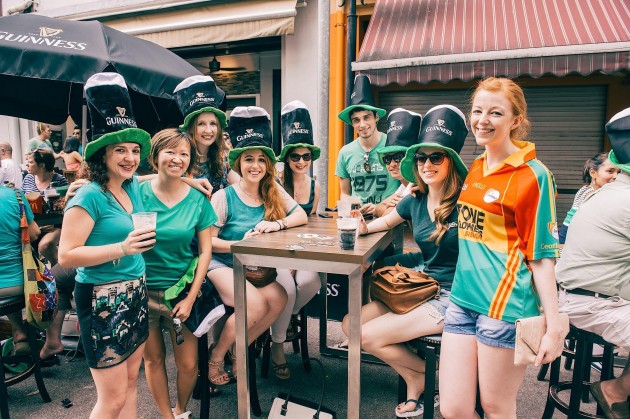 Don’t worry about being out of place or in an unfamiliar situation. Simply head down with an open mind and learn to appreciate a different culture, one that’ll welcome you gladly and include you in all the fun.

Get dressed in your wackiest green outfit, and head down for a weekend of Irish awesomeness. Sláinte – we’ll see you there! 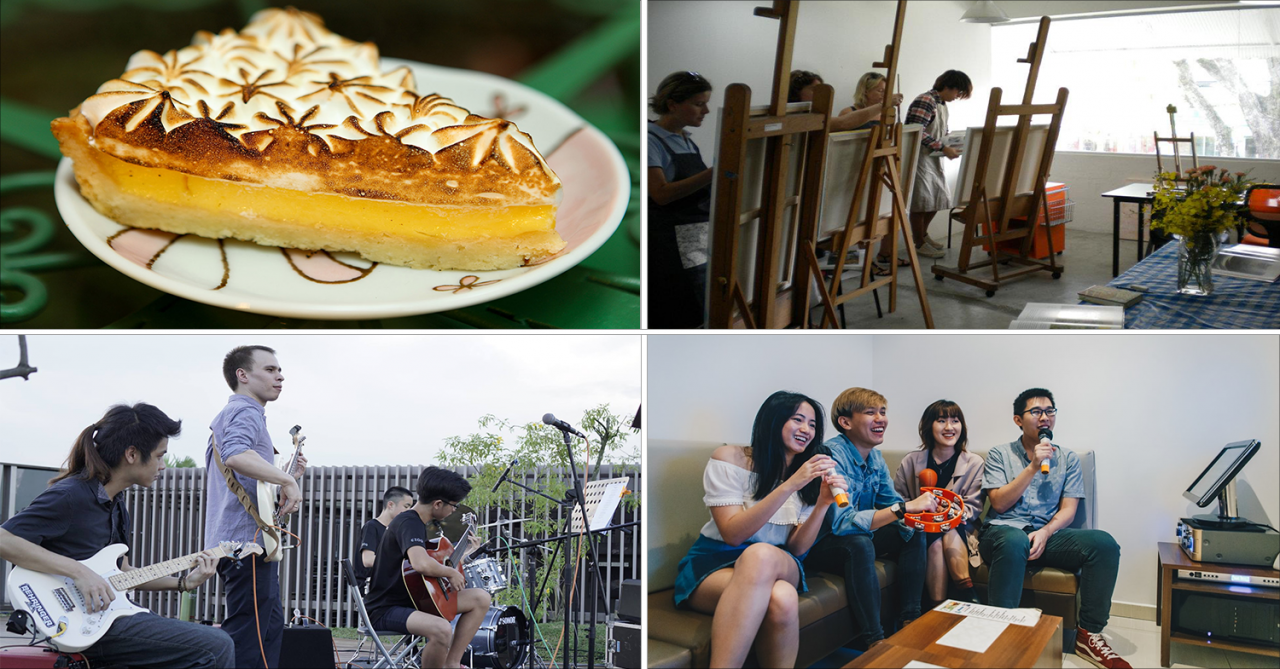 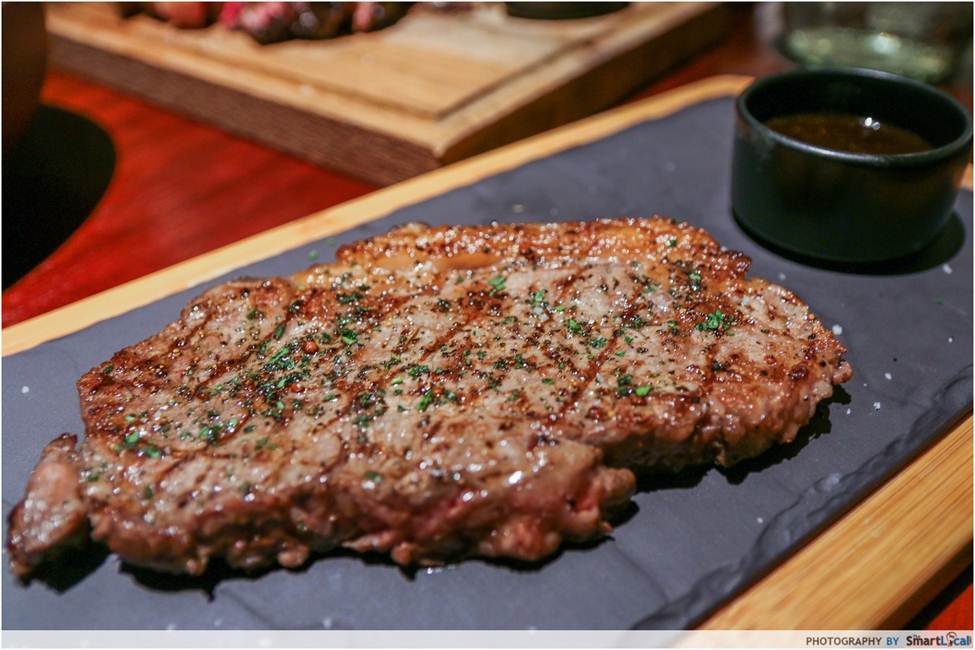