Sceptics who think that men do all the hard work and heavy lifting in society – think again. Women are increasingly being able to compete with and exceed expectations of what men usually do because of their mad skills and know-how – and we do it with class, glamour, and style.

There’s no such thing as “a man’s world” any more – here are 10 Singaporean women winning at life in traditionally male-dominated jobs.

1. LTC Vicky Wang – A born leader who excels on land and water 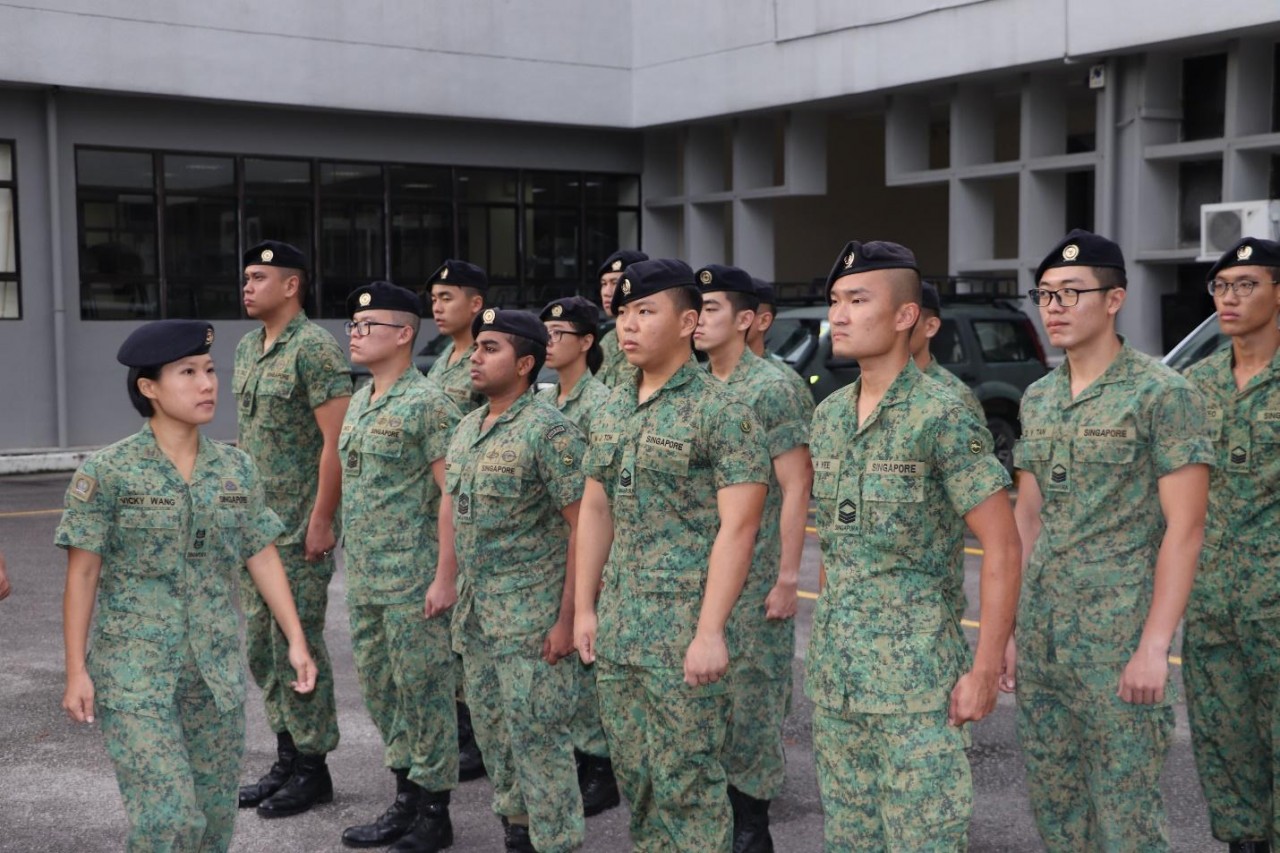 Want to meet a super woman who led an entire battalion of over a hundred young men and women, inspired a team towards victory, and was in charge of grooming the future generation to become top-notch soldiers? Say hello to Lieutenant Colonel (LTC) Vicky Wang, a Signal Officer in Our Army and the current Head of Personnel Development Branch for G1-Army.

Vicky signed on at the tender age of 19 and has been making waves ever since. She’s also a proud mama to 2 adorable boys, slaying the game in both work and family life. 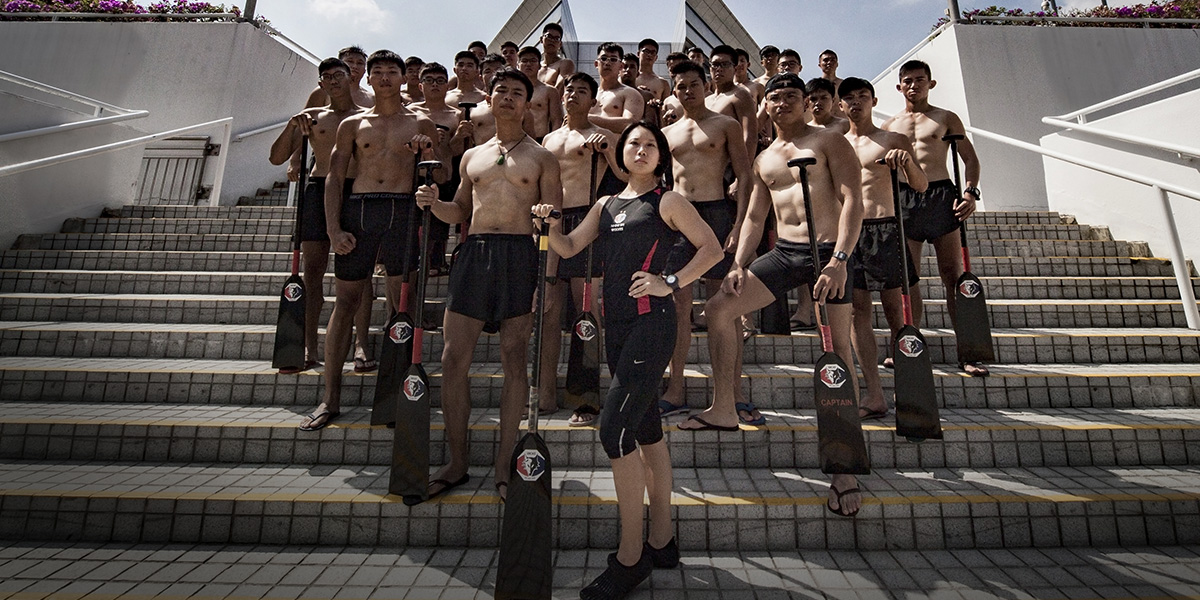 In her previous role as Commanding Officer, Vicky has proven her leadership prowess is not only on land but across the water as well. Her leadership skills and ability to inspire have led her battalion to emerge as champions during the annual Army Dragon Boat Regatta race for two years running.

Talk about an underdog story, as her team was able to soar past the Commandos team, a hot favourite for first place. Take that! 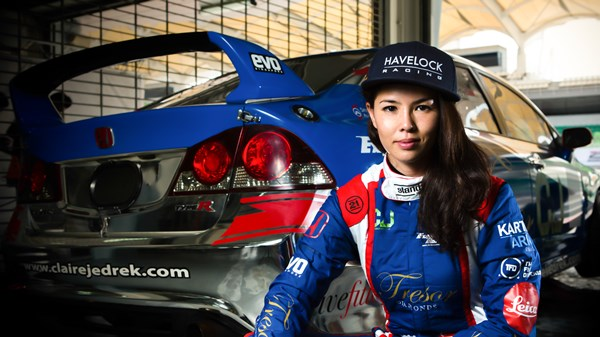 From Grid Girl to Racing Driver, 32-year-old Claire Jedrek is one of the most recognisable faces in the race car realm and blazes the trail for Singapore’s extreme sports scene. She’s so formidable that the industry recognises her as ‘driver first, woman second’. The moment her helmet is on, all bets are off as she competes with – and beats – her male peers on equal ground. 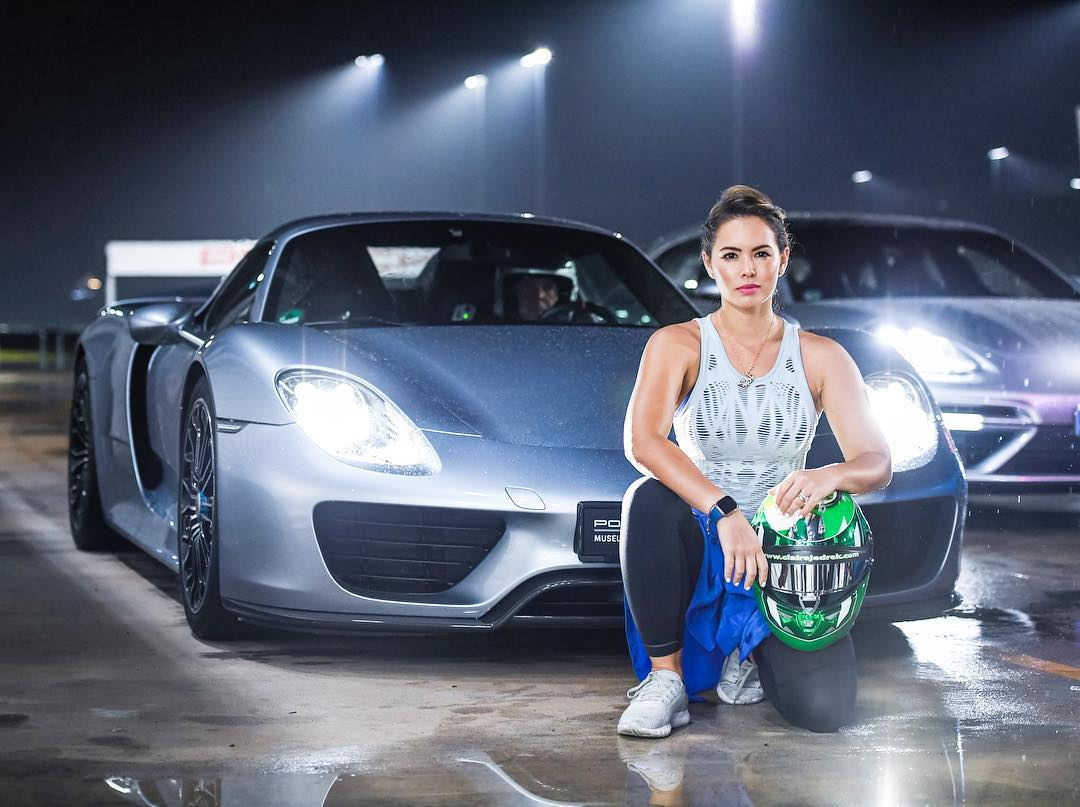 Claire does all her marketing and fund-raising herself, and as if everything she is working on doesn’t keep her busy enough, she also has time to dabble in break-dancing, aggressive inline skating and marathon running. 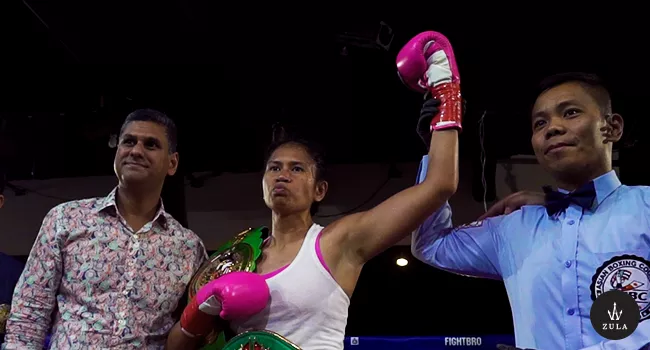 Besides making us wish we had a cool nickname as well, Nurshahidah “The Sniper” Roslie is the epitome of kicking ass and taking names. Some achievements under her belt include a 9-2 win-loss record, plus the glory of representing our nation at the SEA Games from 2009 to 2015. 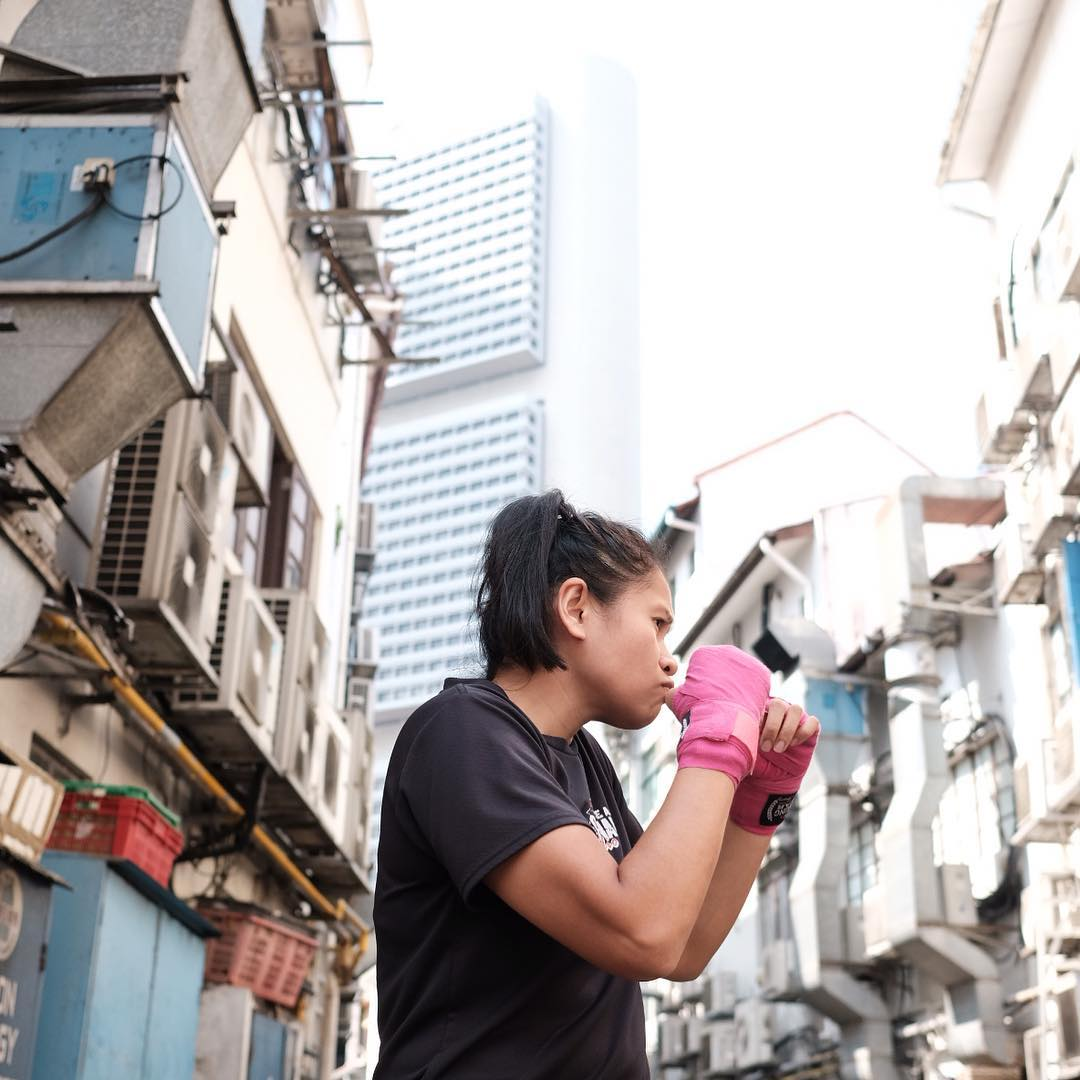 A former scholar with three years of teaching background as a lecturer in ITE’s School of Business, the World Boxing Council crowned her Asia’s Female Champion of the Year for 2017. Can you imagine strutting into the classroom and having to tell Singapore’s first pro-boxing champion that you’ve forgotten yesterday’s homework? *sweats nervously* 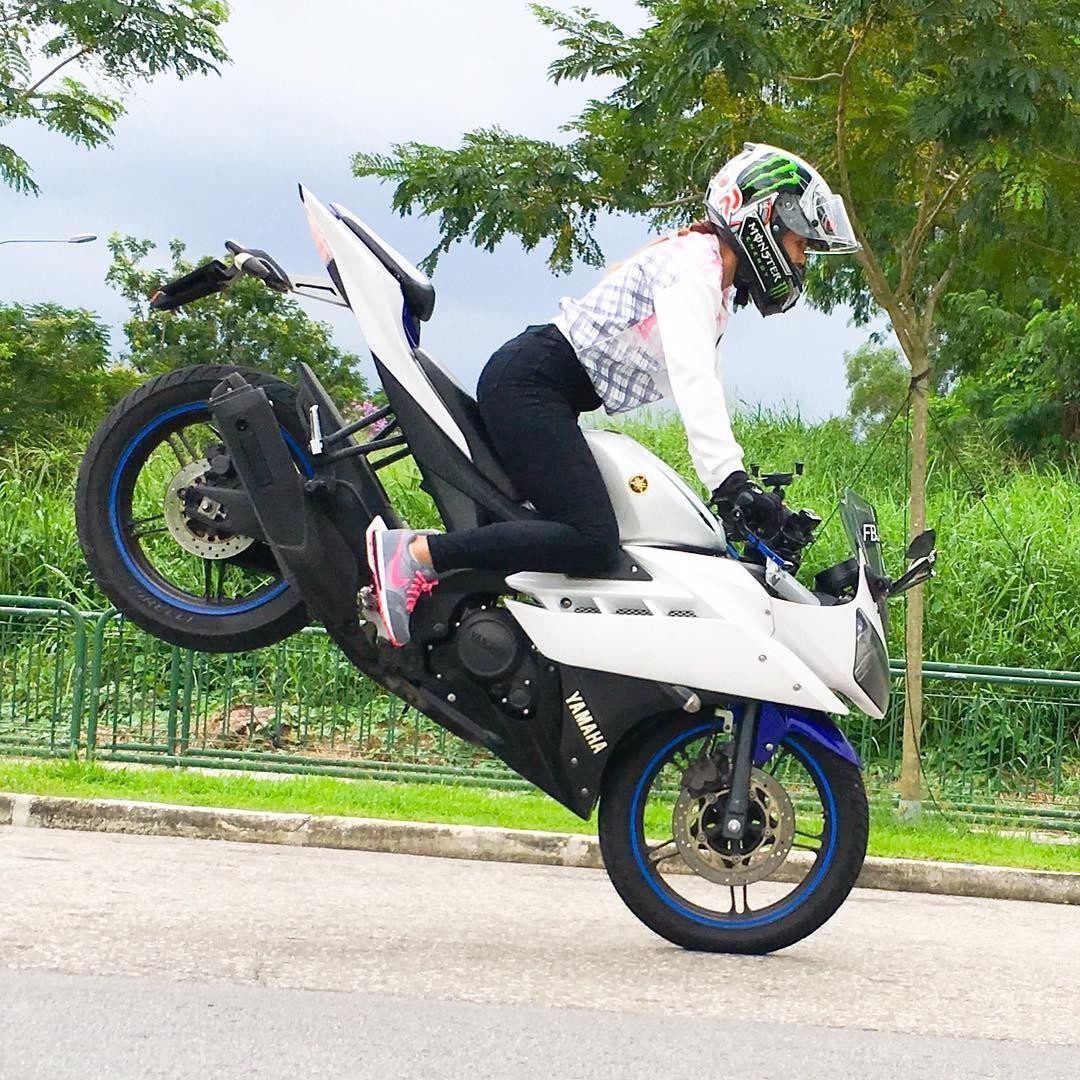 Having dropped out of Banking and Finance School a mere 6 months before graduation, Candy Foo drew plenty of judgements and scoffs from her coursemates. Well, her motorcycle business – CandyMotor – was successfully kickstarted with the help of her partner and has taken off to massive success, so who’s laughing now? 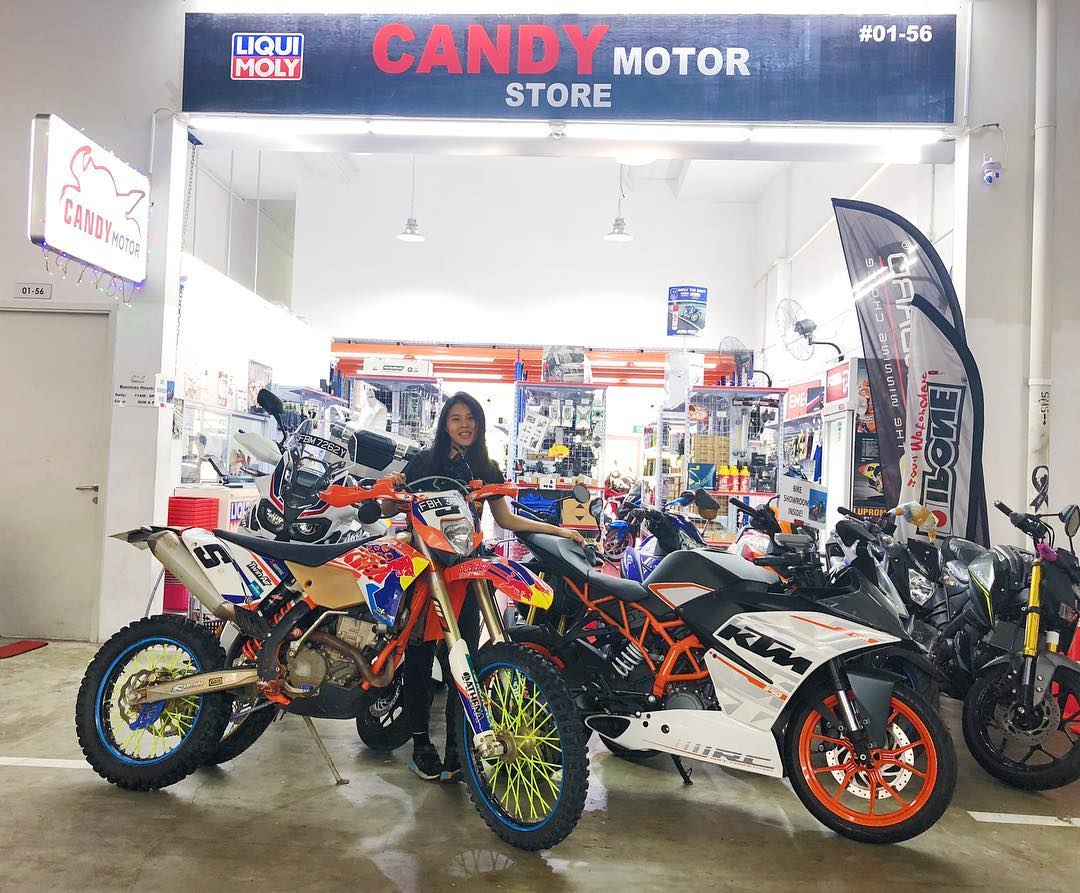 It ain’t just about making the big bucks, either. CandyMotor started off as nothing but a $200 venture and a pipe-dream to provide motorcyclists in Singapore with accessories that are both high-quality and affordable. Helming a one-stop shop for maintenance and repair work plus retailing flashy accessories and everything else in between, Candy has opened a market haven for riders, all at the age of 21.

As a Platoon Sergeant in the Military Police, 2nd Sergeant (2SG) Nursheila Zuraidah maintains discipline and regimentation within the force and keeps our soldiers in check. Growing up, Nursheila knew she was not meant for the traditional desk bound job. Hungry for new experiences and exploring the outdoors, she decided on taking the unconventional route of being a leader in the SAF Military Police. 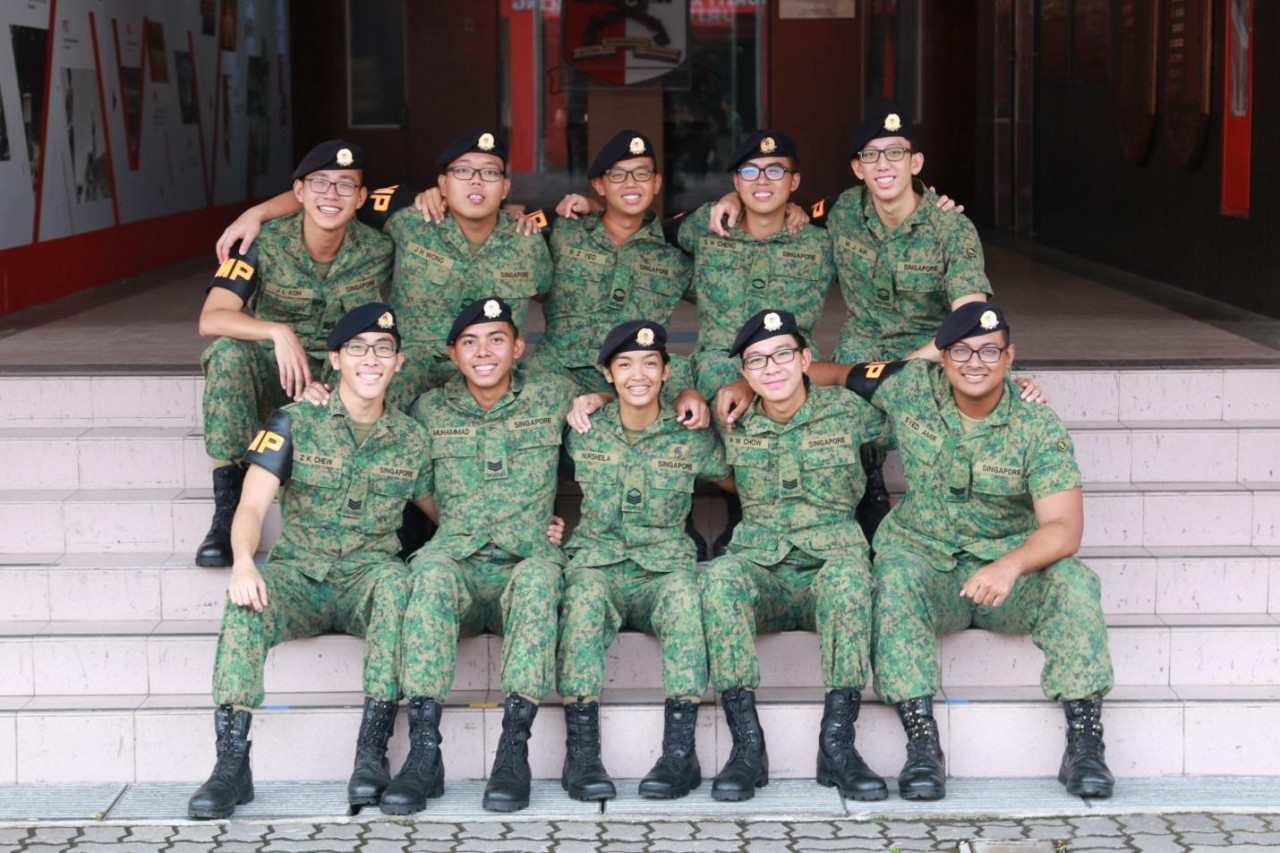 She calls it her “dream career” and pushes other women to follow in her footsteps, whatever trepidations they may face. “There are a lot of girls in Our Army these days, and we all managed to pull through. So you can too!”. As part of her training, she completed a gruelling 9-day Jungle Confidence Course which involved hunting and foraging for food, and constructing an individual shelter while trying to navigate to a designated safe zone in the dense rainforest. 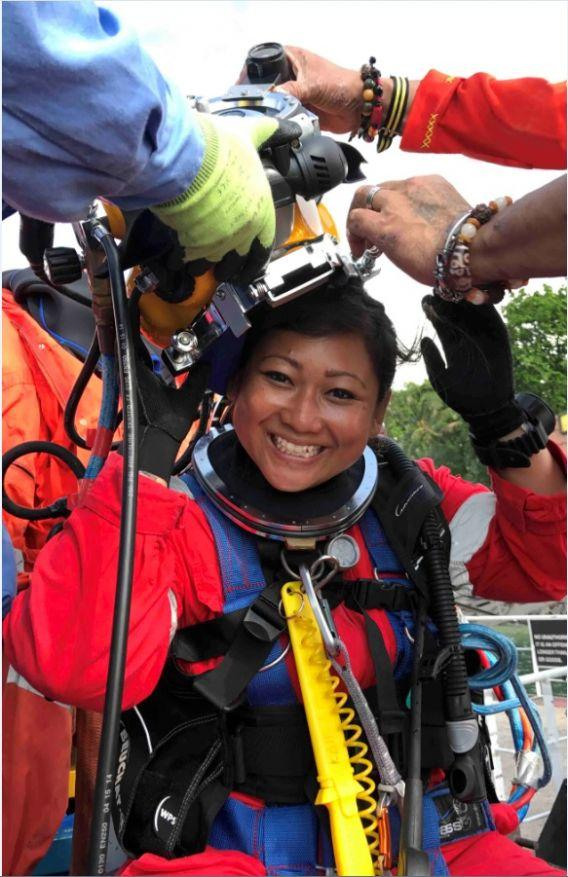 Meet Siti Naqiah Tusliman – Singapore’s first female diver to be certified to use specialised diving gear for work purposes in local waters. Part of a 63-member strong elite club of divers who have attained the highest standard under the local code of practice for diving work, she dons a 16kg diving helmet and dives every day for at least 4 hours each time to scrub and polish the underside of hulls. 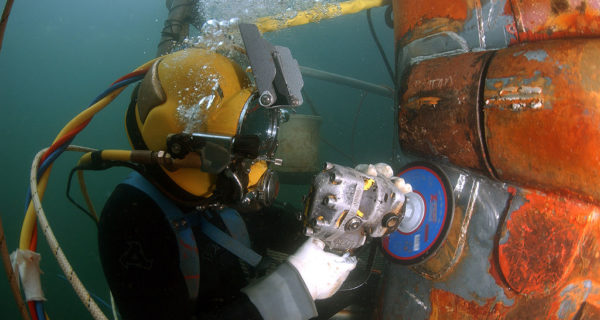 Her job is physically and mentally demanding – no wonder that this line of work is traditionally male-dominated. However, Naqiah remains high-spirited and continues to hustle and keep vessels belonging to global shipping companies in tiptop shape. 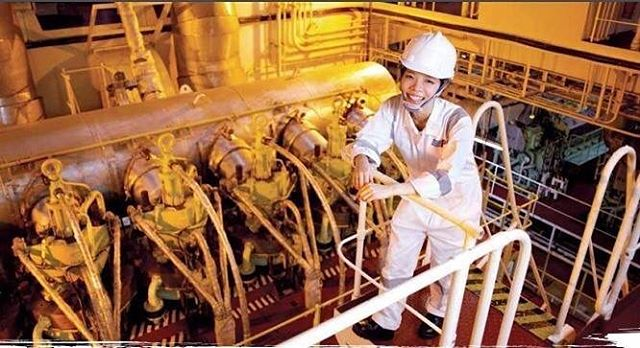 All these sound daunting, even for most guys, but welcome to the life of Tan Huixian. Huixian’s job as one of Singapore’s few female marine engineers has brought her not just out to sea, but across continents to different countries such as China, New Zealand and South Africa.

It’s not a glamorous job, that’s for sure. She slogs away in the grimy engine room, cleaning machinery and inspecting them every single day. But as someone who loves hands-on work and travelling, this job seems almost tailor-made for her. 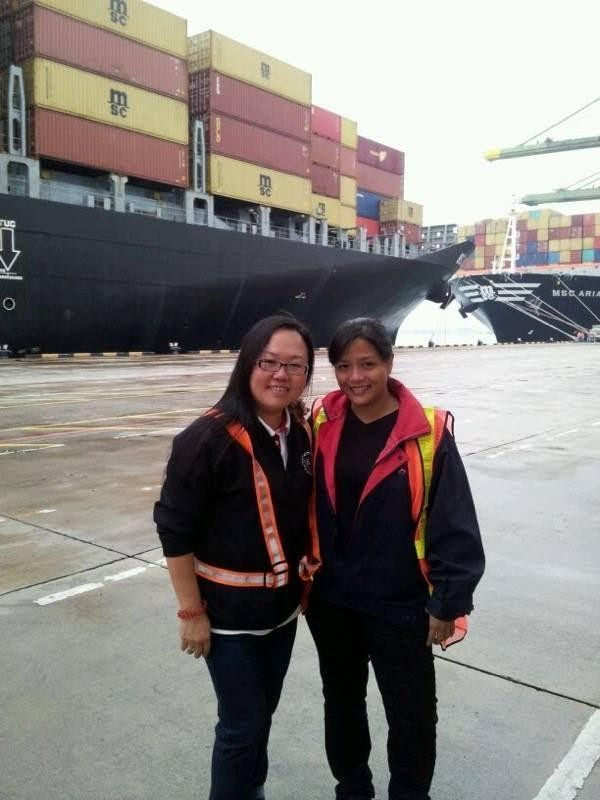 Here’s someone who might just be able to slay at all arcade claw machines. Operating monster machines has been Kelly Tan’s true calling for over 11 years. As PSA’s only female crane operator at age 45 and a mother of 2 kids, Kelly is a role model who breaks norms and social boundaries. Her love for cranes and heights has brought her to loading containers using fifteen-storey-high yard cranes and being at the frontline of the quay – that’s almost as high as the bungee jump at Sentosa!

This is Kelly’s 11th job, and there are perks to this stint that none of her previous 10 can offer. In her crane cabin, she gets a panoramic view of Singapore’s waters as she spends a third of her day transporting containers from vessel to truck, and vice versa. Sweet! 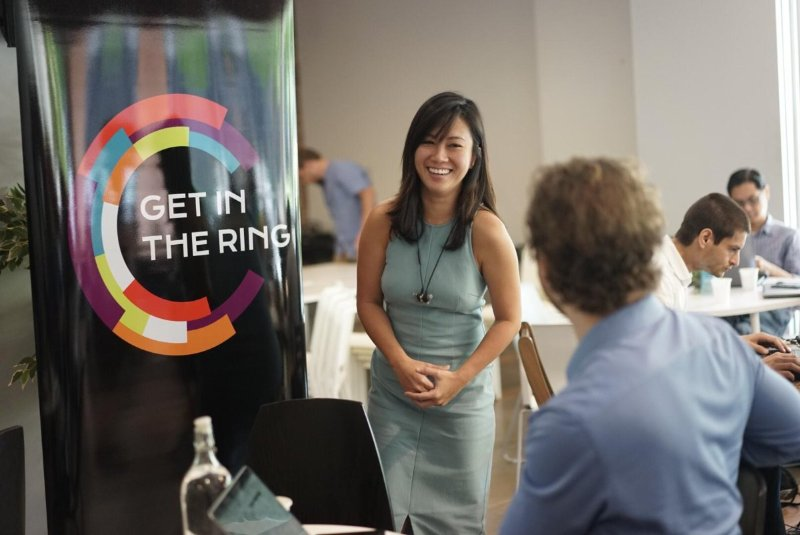 When she was stuck looking for a lawyer to help her restructure a previous business she was involved in, Cherilyn Tan struck gold with the idea for Asia Law Network, a database that helps users find lawyers with the right background and experience, ensuring nobody’s time is wasted.

In a field known for men like Steve Jobs and Mark Zuckerberg, tech entrepreneurship was – and still is male-dominated. Entering this field was an uphill challenge, but Cherilyn tapped on her unique blend of experiences in business, marketing, and design thinking to spearhead the development of a functional and user-friendly database.

Since its founding, the company has proven itself to be a reliable partner for lawyers and people seeking legal help, and has even made its way to Stanford University’s Legal Tech List, a curated list of 749 companies in the world changing how law is done. #GirlPower to the max! 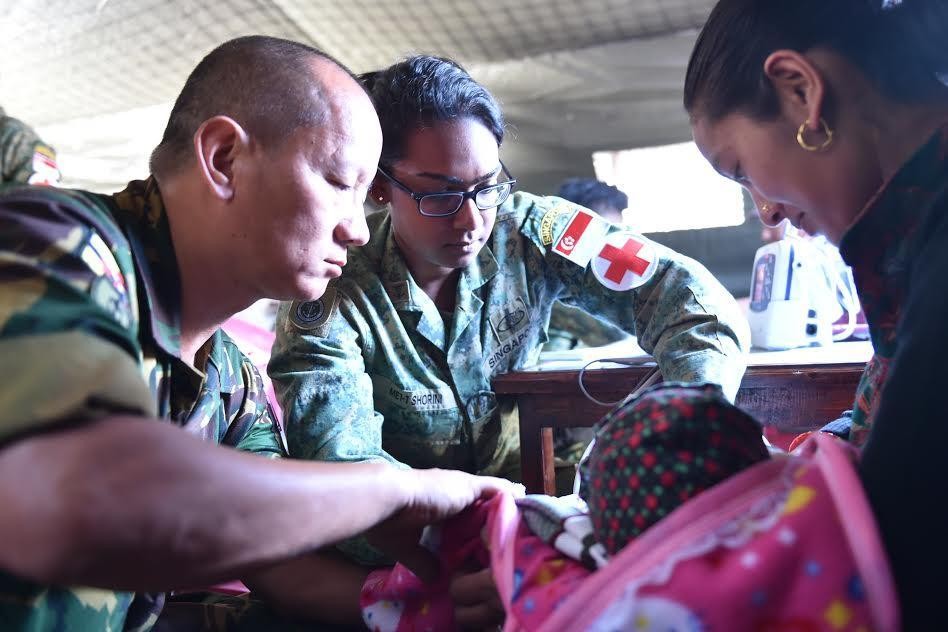 Deployed to Nepal back in 2015 to help with the aftermath of an earthquake, Military Expert (ME) 1 Shorini Dhurgha’s skills in emergency medical training were put to the ultimate test. It was on her and the team to conquer the challenging circumstances and give vital medical aid to the earthquake victims.

On that life-saving mission, one particular incident that has stuck with her was how an injured Nepali child helplessly wept onto Shorini. “All I could do was put my arms around his shoulder and comfort him”. Having to deal with such gut-wrenching scenarios on the job shows a degree of emotional toughness that’s hard to find. Through it all, Shorini had to stay strong for herself, her team, and the people counting on her. 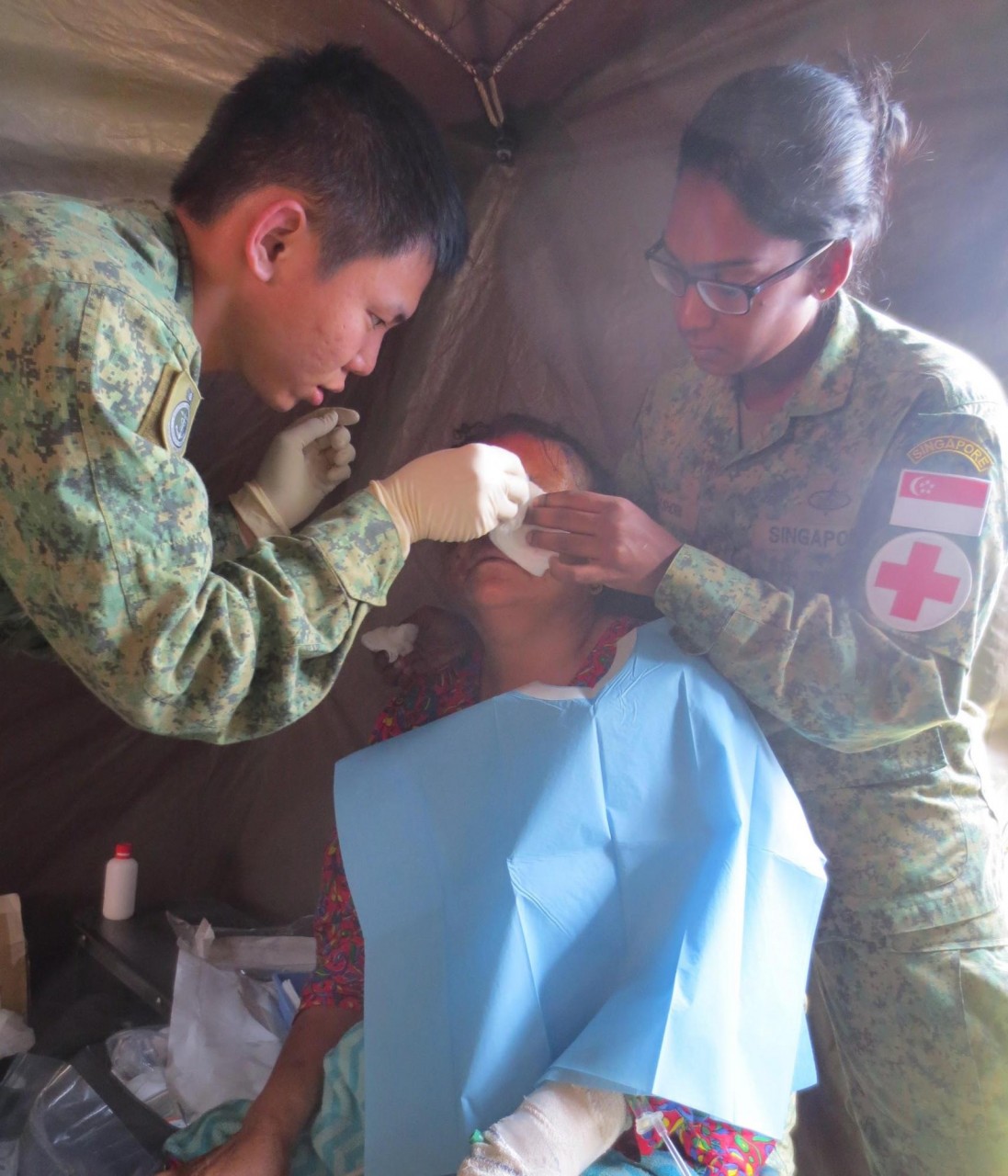 After graduating with a Diploma in Nursing, Shorini yearned to join an organisation involved with Humanitarian Assistance and Disaster Relief. Being a medical practitioner in the SAF also meant increased exposure and personal development.

Now a vocational training instructor, Shorini trains our NSmen, Regulars, and NSFs in medical protocols and procedures. With steel-like resolve and a heart bursting with compassion, Shorini has managed to conquer a traditionally male-dominated job.

Our abilities aren’t determined by gender

Traditionally, as caregivers and nurturers, women have been the ones we turn to for a “soft touch” approach to fixing problems. But it’s the 21st century and women are getting – and utilising – opportunities to stand toe-to-toe with men, not just in stereotypically “feminine” jobs like nursing and teaching, but in every single field we’ve found opportunities in.

“[My kids] know what I’m doing is purposeful, that mommy is defending the country… I make a direct impact on soldiers’ lives, to make them strong – in body, heart and mind.” – LTC Vicky Wang

This is the case in Our Army, where women are increasingly taking up leadership roles and making real and tangible differences to our soldiers. With the commitment to serve, these fearless femmes are empowered in a career where they perform diverse roles and enjoy numerous advancement opportunities, work alongside like-minded leaders and play their part in defending the nation.

“Our Army really makes you realise your true abilities, and everyone is seen as a soldier first. Not by gender. This is a career that commands respect. It trains you to be independent, to communicate to influence, and moulds you to be unbreakable. You will never get bored!” – ME1 Shorini Dhurgha

“My career lets me do things few other women experience, for example, field camps and soldiering. The training challenges my physical and mental strength, and I feel proud of myself every time I conquer my limits.” – 2SG Nursheila Zuraidah Bte Zulkarnain

The 3 Army Regulars featured prove that regardless of gender, there are diverse roles for anyone who has the passion to rise up, take charge and be a leader who aspires to make a difference. 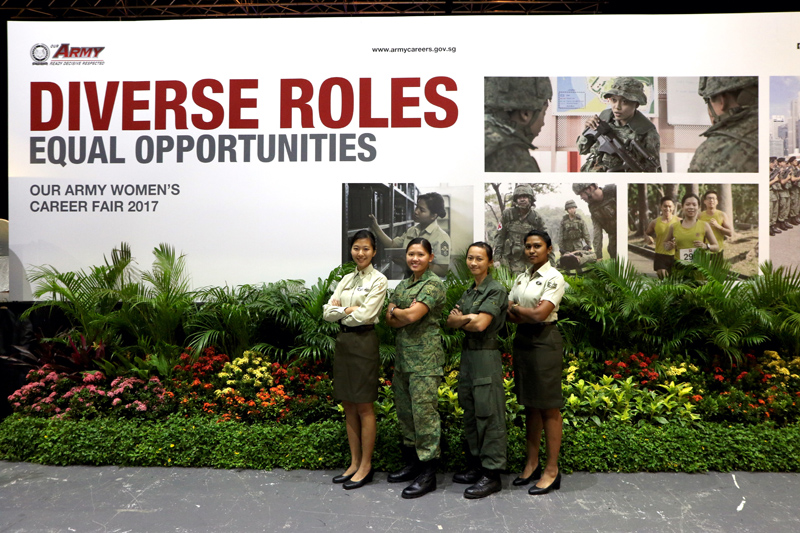 Find out more about career prospects in the Army for women here!

This post is brought to you by The Singapore Army. 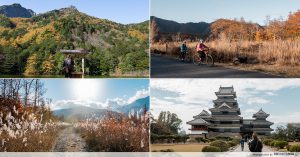 12 Things To Do In Nagano Prefecture, Japan - Scenic Hiking Trails, Mountain Biking, And Soba-Making Workshops
FairPrice Is Helping Singaporeans Donate Groceries To Over 70 Charities This Christmas 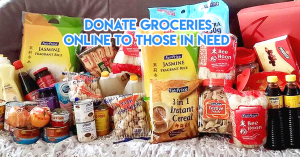