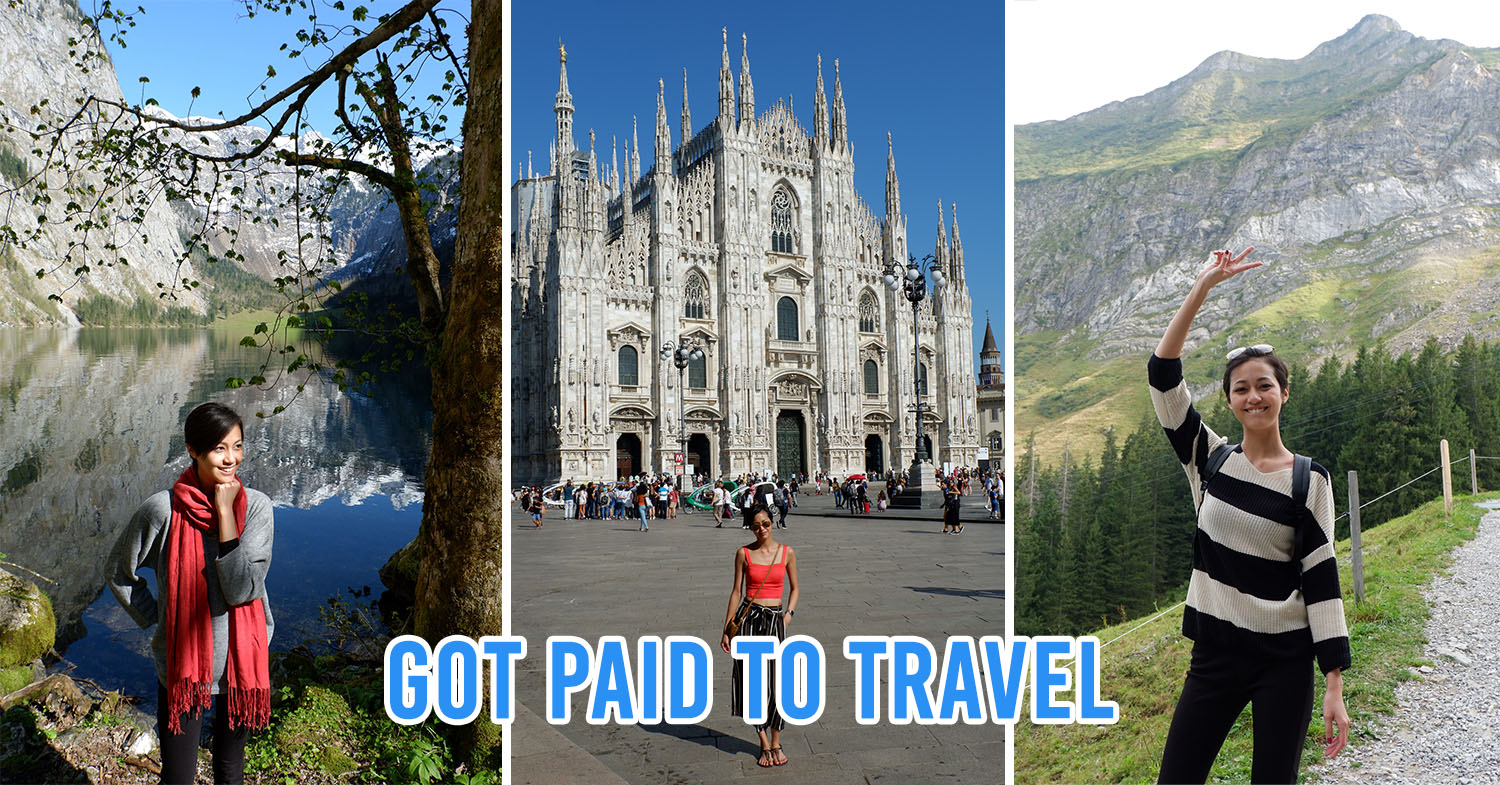 It happens to the best of us; One day you’re going through the motions when suddenly, bam, you’re hit with that defining question, “What am I doing with my life?” When that happened to me, I upped and left a stable career in publishing in Malaysia to start afresh in Singapore as a flight attendant.

I didn’t know what the heck I was getting into, but I ended up going through nearly 3 years of bittersweet experiences, travelling the world #likeaboss, and being privy to tons of juicy flying gossip.

Making a choice: Giving up a stable job for the unknown

First, a little context. At 26 I had a pretty successful career in the publishing industry in Kuala Lumpur. At that time, I was already #adulting hard – I had bills to pay, and at the same time,  was providing financial support to my parents who didn’t have enough savings for retirement. This meant that I had very little to spend on myself. I rarely travelled, and if I did, it was only to nearby budget destinations.

These all seemed like typical “first world millennial” problems to have, but I’d often daydream and browse higher-paying jobs I wasn’t qualified for, that could solve that “no money, no life” conundrum.

In a YOLO attempt to feed this yearning, I applied for a job as a cabin crew for Singapore Airlines and ended up passing the interview. Just like that, I moved to Singapore 4 months later to start a new career as an air stewardess.

Intro to being a cabin crew: What I never expected

So here’s a myth I can officially debunk: People generally think being a stewardess is as easy as serving coffee and looking pretty. But it turns out you actually need to have some wicked memorising skills to flourish in this industry. My batchmates and I during training. Look at my fresh, eager face – we had to be fully groomed every single day we were there.

During training we had to cram information on aircraft cabin systems, emergency procedures and crew duties. Not to mention bucketloads of airline jargon, equipment names and functions, food and drink menus, and even go-to answers for passenger queries.

I kid you not, my manuals weighed a good 10kg, and I actually had toned arms from carrying them every day. There were regular tests to pass, and if you failed, you’d get held back till you got it right. We had lots of projects and presentations to work on, which had us doing some overtime once in awhile. Excuse my face in this picture – it was about 9pm here and we hadn’t had dinner.

To top it off, trainees – being in the lowest of ranks – were treated like school kids. I’m talking explanation letters for minor misdeeds, threats of bad reports on our permanent records, and standing silently with our heads down while superiors would berate us for 15 minutes straight for something as simple as not greeting them by their names.

Many male Singaporean crew likened it to army training – except that we had to trudge through the mud with a golden smile on our faces. It wasn’t all work and no play, of course. We had a fair amount of goofing around – which was often the reason we got into trouble.

Thankfully, my batchmates and I had each other for support. And since we were navigating unknown territory together, it actually ended up being really fun because we bonded over hardship. I can tell you now, nothing makes a crew happier than seeing their batchmate’s name on the crew list of a flight they’re doing.

The word “probation” next to your name on the crew list is equivalent to a bright neon sign on your head saying, “RIP ME APART!”

Being on probation means you’re going to get blamed for pretty much everything, even when it’s not your fault – almost like a rite of passage you have to go through.

On my very first flight, my supervisor and senior crew spared no mercy – from screaming at me in the galley within earshot of passengers, to mocking me by saying, “See? You’re making me do your job for you,” whenever I asked them any questions. After the flight, they laughed at me, saying, “Oh, we were just training you.” At least you get to balance out bad experiences with good ones like travelling, so you can do this pose and go, “come at me, bruh!”

And this isn’t even the worst of it. I’ve experienced and heard first-hand stories of crew being bullied to the point of tears, senior crew bossing others around while refusing to lift a finger, and even sexual harassment by fellow crew and passengers alike.

Most times, junior crew are too afraid to speak up, in fear of being reported for “insubordination.”

Eventually, I had to adapt to this volatile environment in order to survive; I’d just apologise for whatever wrongdoing I was accused of and move on. The key was to not take things personally, and not let bullies see that they’ve affected you. After all, hyenas tend to target prey that are visibly injured.

Of course, I have to be fair and say that these were not everyday occurrences; I’ve also had many flights that were super fun, with awesome sets of crew. On the whole, most of them are generally nice, and many are patient and willing to guide others. 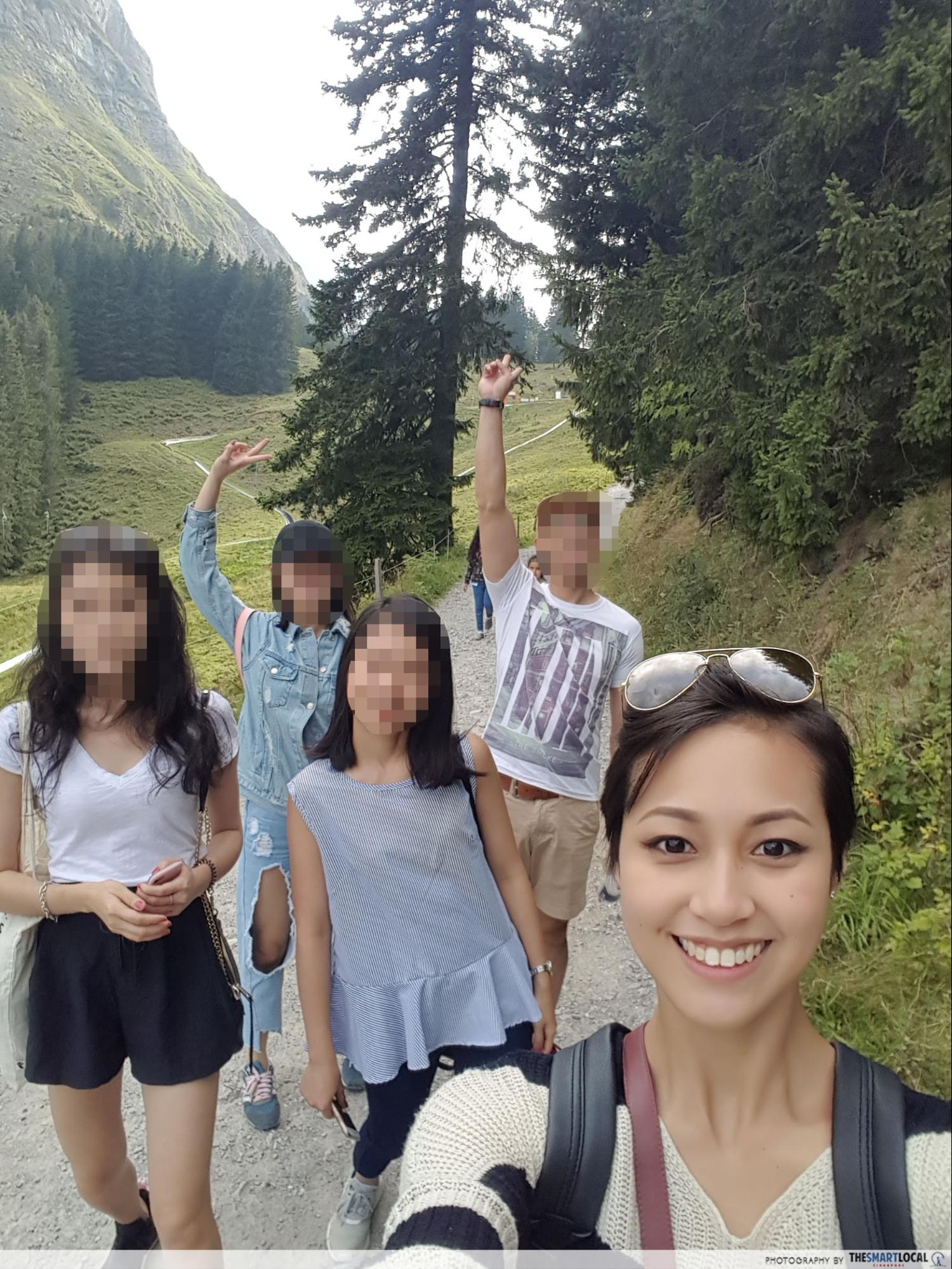 On my first road trip in Switzerland, where we had only 1 day to drive out and go sightseeing.

Unfortunately these few bad experiences onboard left me with anxiety and the dreaded pre-flight blues – something I’m sure all crew can relate to – because you never know if you’re about to kena some major tyrant on your next flight. My BFF batchmates and I in Amsterdam. Flying is awesome when you’re working and travelling with people you know and like.

Like any job out there, things are bound to become easier once you’ve gotten the hang of it. You also get scrutinised less after you’ve moved up the ranks from junior stage. It’s a vicious cycle, because once a crew climbs in seniority, many of them tend to impart the same treatment they received unto their juniors. That’s how “crew culture” works.

It isn’t all negative though; Crew culture may be a minefield when it comes to seniority and insubordination, but funnily enough it sort of brings people together. Most crew are polite and courteous towards one another – whether it’s so they don’t step on any toes, or simply because they’re genuinely nice people. 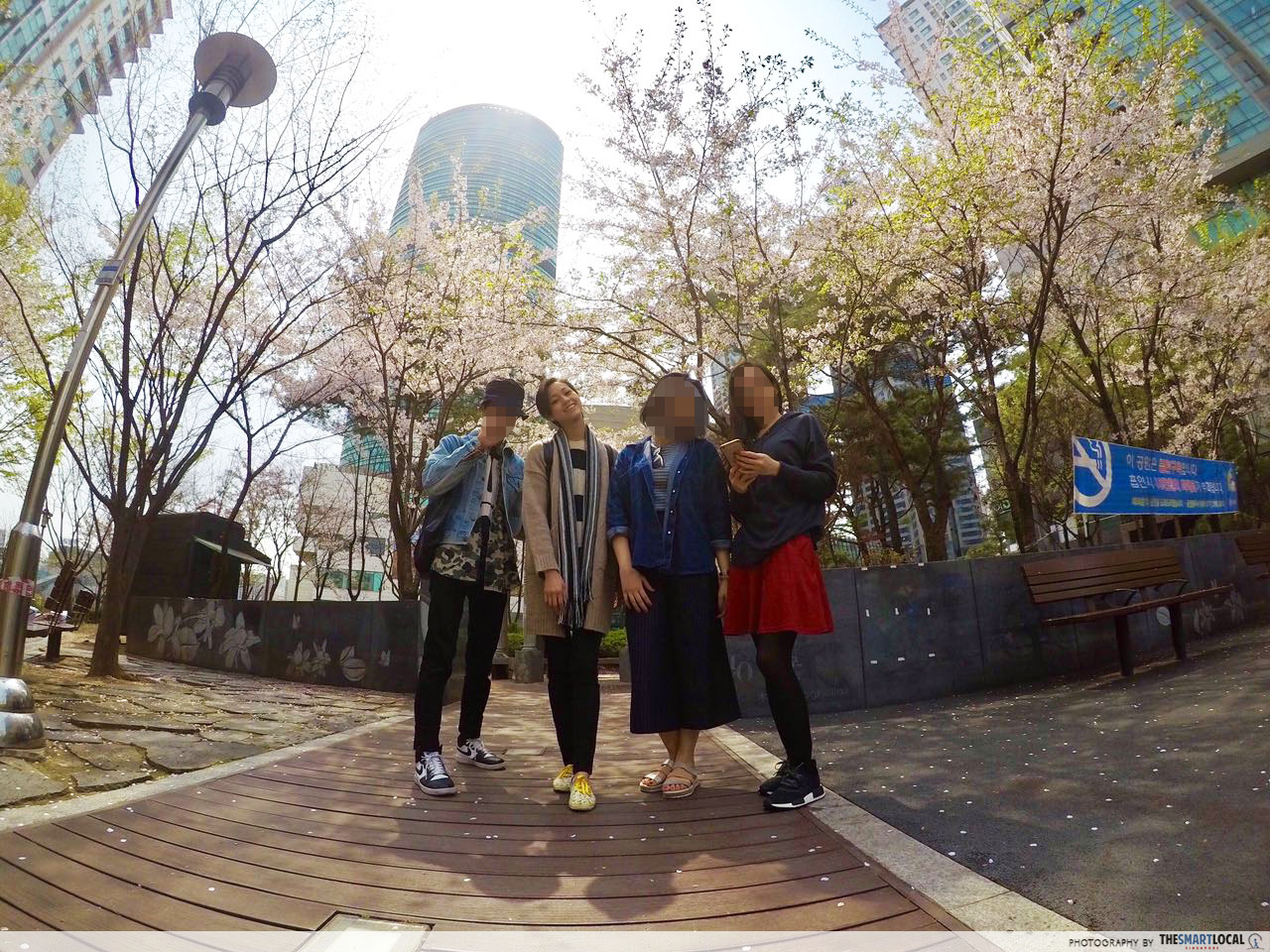 It may look like we’re close friends on a trip, but I’d only met these people some 12 hours ago!

This may be subjective to my experience, but I felt that cliques didn’t really exist in the airline. Yes, crew of similar ranks would gravitate towards each other, but essentially you’d never be “left out” when it came to things like having a meal with your set of crew. For example, if you head down for breakfast at a hotel abroad and see a table with your fellow crew there, you’d be more than welcome to join them.

Flights and layovers definitely became more fun as I stepped out of my shell and started making an effort to mingle with crew onboard. I’d go sightseeing or shopping with people I had just met for the first time, and bond over boozy nights and hilarious flying stories. We always seem to have the most fabulous travel photos. 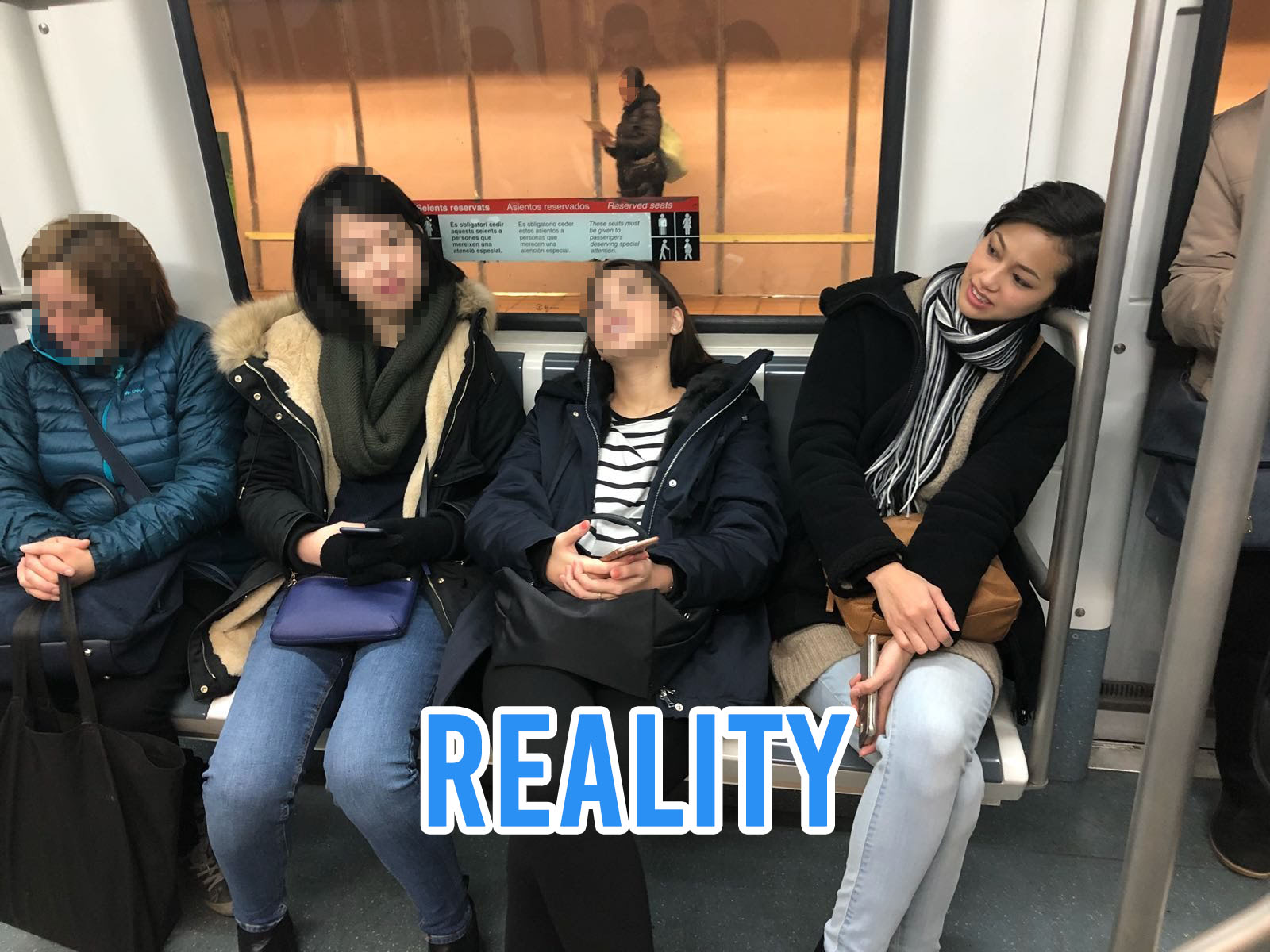 But in truth, we’re jet-lagged and exhausted 100% of the time.

There are also some interesting crew patterns I had observed during my time in the airline: Posing on a bridge in Venice

Stories: Juicy gossip you never asked for but hear anyway

You know the saying, “it’s a small world?” In the airline, you truly experience how tiny it really is. Stories here spread like wildfire; Something scandalous could happen on a flight and by the time you touch down, the entire airline would already have heard about it. There are eyes and ears everywhere.

There’s also the infamous “Top 10” list of notoriously nasty senior crew. Many a time, crew would call in sick just to avoid working with them.

I myself had to pay my dues by flying with a few of them. Oftentimes these individuals were explosive firecrackers at work, and most had their own set of rules and procedures they expected crew to follow. Some were outright bullies who’d choose a specific target to make life hell for her/him.

Mind you, these Top 10s also happened to be ridiculously charming towards passengers and garnered tonnes of compliment letters with each flight. It was like watching Jekyll and Hyde.

There were some cringe-worthy scandals too. There were 2 infamous Top 10s who were cheating on their spouses and openly having a long-term affair. They were apparently banned from flying together because whenever they did, they’d terrorise all the crew onboard.

Hanky-panky among crew was pretty common but very hushed; My colleagues have told me stories of “naughty” crew games that have taken place during layovers. Plus there are notorious “triers” who’d hit on anything in a skirt. Hey, I just met you, And this is crazy… But now we know everyone’s secrets, vices, and stories.

It was amazing how easy it was to bond with crew I just met over juicy gossip while sharing stories of our experiences.

Takeaways: Flying was bittersweet, but I have no regrets at all

I often get asked, “You quit just after 2.5 years – was all this even worth it?”

Well, coming from a modest background, I’d say, definitely! Yes, I may have stalled my writing career for that amount of time, but had I chickened out of the job, I would never have gotten to see so much of the world in a lifetime – and earn a pretty darn decent amount of money while at it. “Surviving” and adapting to the airline culture was also a fantastic way for me to gain a ton of confidence and work on my PR skills – something that I’ve always struggled with as an introvert. And while starting a new career from scratch was pretty scary, it was also quite humbling because there were so many new things to learn and improve on.

Had I decided that flying was the right career for me, I daresay I would’ve continued to flourish there. I had maintained a clean record, received plenty of passenger compliments, built up a good reputation amongst fellow crew, and was even told by my superiors that I had a rather positive future in the airline. My decision to leave the airline was filled with internal conflict – I’d be giving up a job with great pay and travel opportunities, but I’d no longer have to deal with difficult people on a daily basis, battle perpetual exhaustion, or be haunted by 3am standby activations.

I also wanted to pick up where I left off in my writing career and settle down before I turned 30 – and I’m well on my way to that as I am now with The Smart Local and recently got hitched.

The bottom line is, a career as a flight stewardess isn’t always a walk in the park, but it’s up to you to make the best of every situation. A lot of retired crew recall flying as the best times of their lives for a good reason. Just don’t give up at the first sign of distress because sticking it out can be worth it. 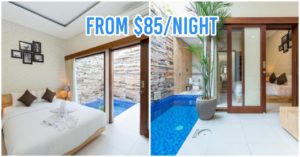 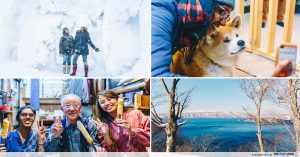