Acts of kindness in Singapore

“Carry out a random act of kindness, with no expectation of reward, safe in the knowledge that one day someone might do the same for you.” -Princess Diana

The act of being kind is one that comes entirely from the heart, with the happiness of those you’re kind to being all the reward you need.

And right here in Singapore, there is no absence of kindness. We’ve gathered 9 instances to warm your heart and restore your faith in humanity, and be inspired to reach out to the people around you. 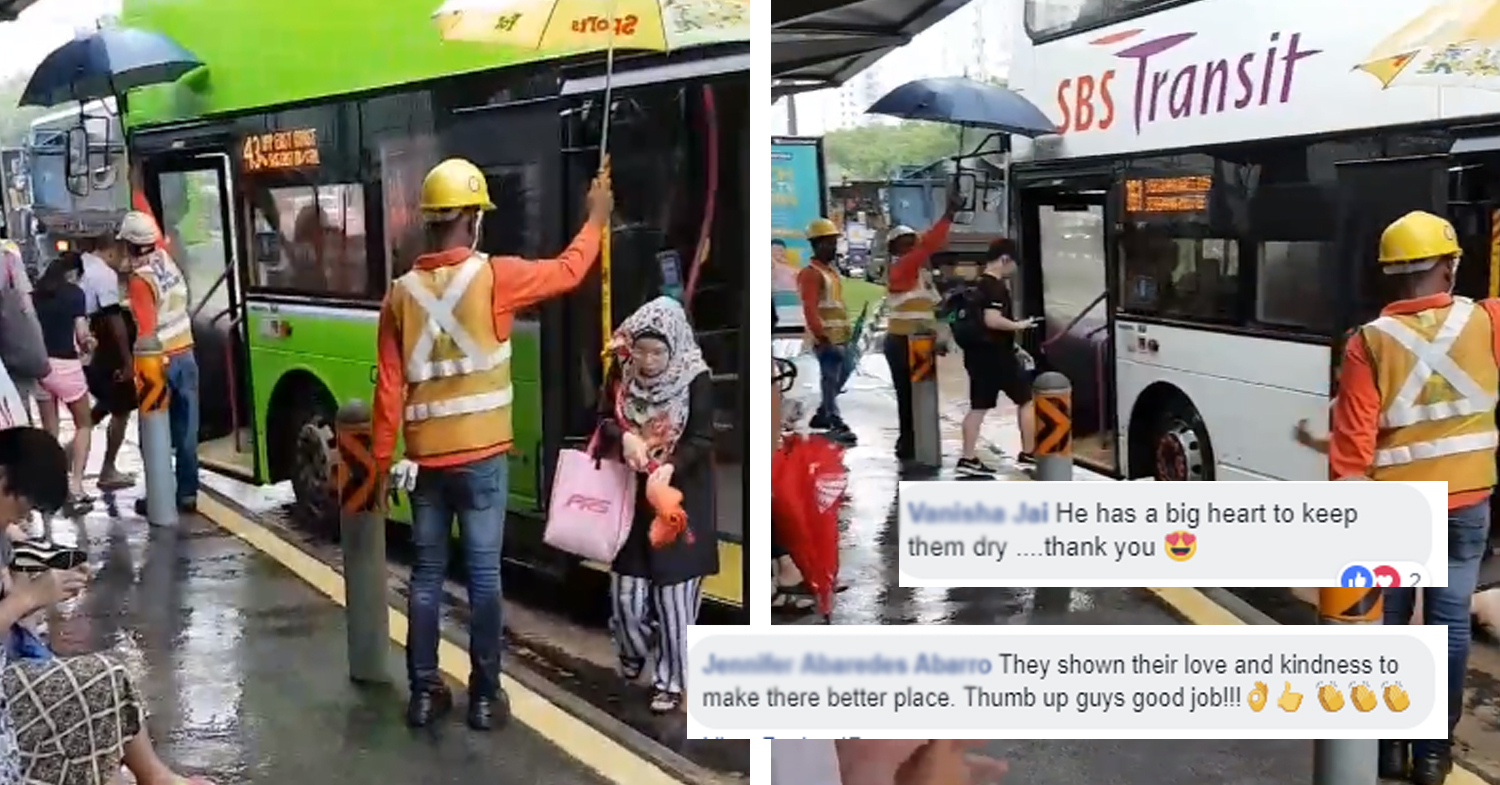 While on his way to the bus stop, Winson Heng was caught in a heavy downpour. Although he fully expected to be drenched, to his surprise, a foreign worker shielded him with an umbrella.

At the bus stop itself, Winson noticed that 2 foreign workers had stationed themselves there to protect both boarding and alighting passengers from the rain. The workers did this entirely out of the goodness of their hearts, having sacrificed the time they could have used to rest from their construction work – all to lend a hand to people in need.

2. This coffee shop lets you buy meals for the needy 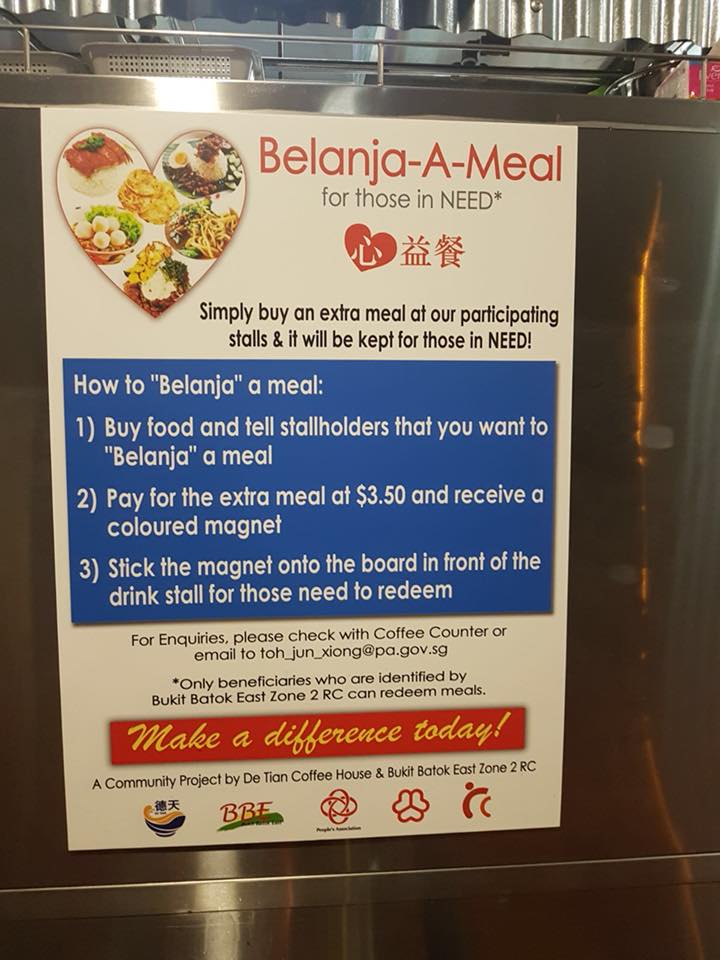 If you’ve ever thought of helping the needy but don’t know where to begin, De Tian Coffee Shop in Block 265 Bukit Batok East Avenue 4 is a good starting point. In collaboration with PA Grassroots MP Rahayu Mahzam, De Tian is now running a Belanja-A-Meal initiative, where you can belanja (treat) a meal for the needy when you order food at any stall here.

Each meal you purchase for the needy is $3.50, and you’ll receive a coloured magnet that you can stick onto boards indicating options for Indian, Malay, and Western food, alongside cai fan.

3. Couple offers young people with nowhere to go a safe sanctuary in their home 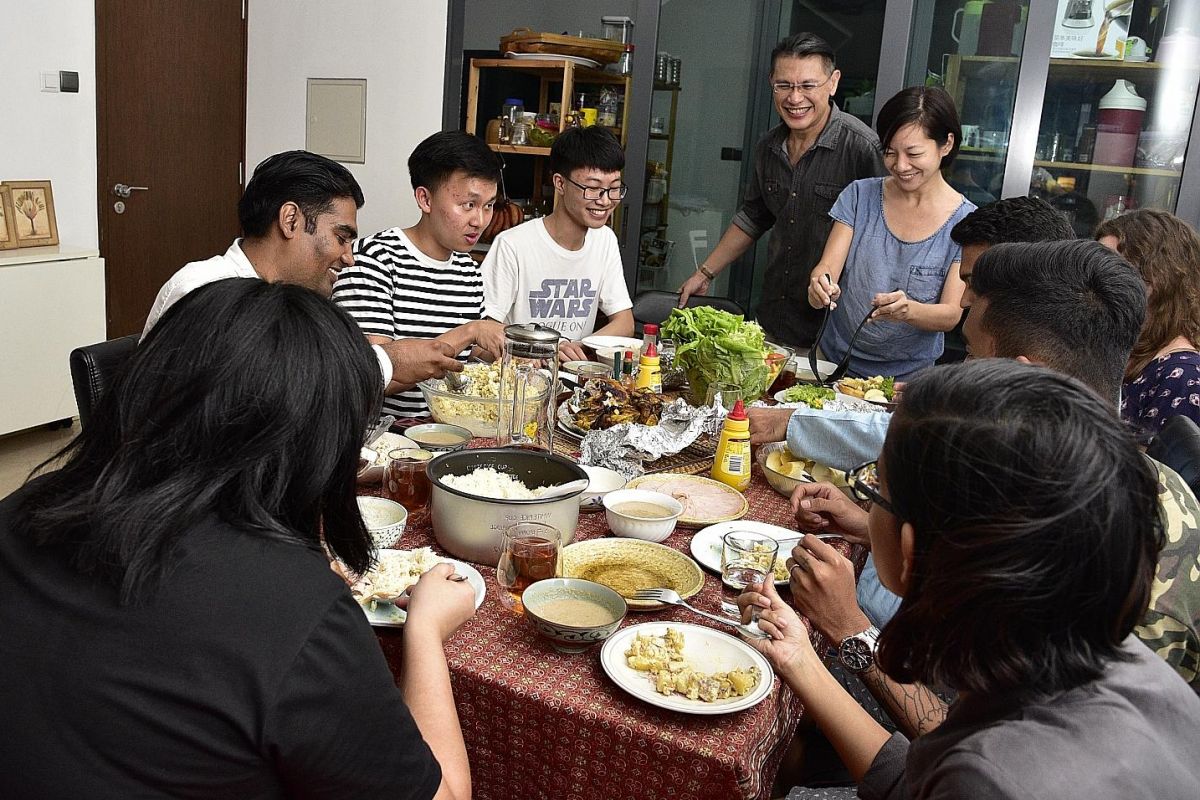 Kenneth and Adeline Thong hosting a hearty meal for both their youth charges and guests
Image credit: The Last Resort

Kenneth and Adeline Thong have been offering free lodging to troubled youth aged between 18 and mid-20s in their home, which they dub The Last Resort. The Last Resort is an alternative to conventional shelters and children’s homes.

In Adeline’s words, The Last Resort is meant to be a place where her charges are able to “experience family”. She expects no tangible benefits from the good she does and is simply happy to be able to be a key part of her charges’ lives.

You can find out more about The Last Resort here. 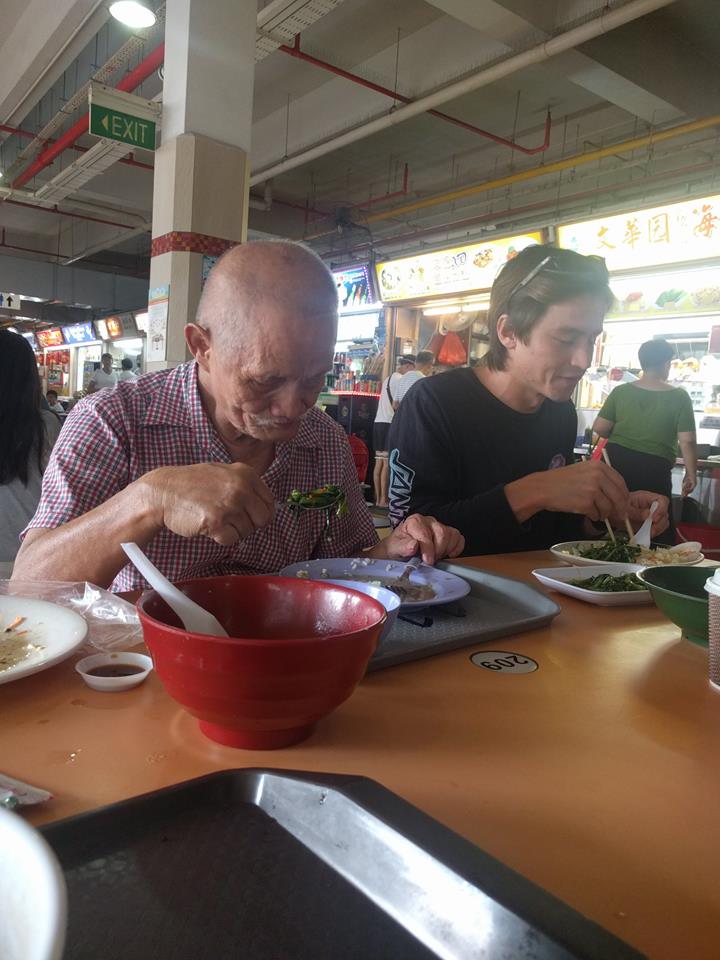 While Elliott Small and Adair Robins were having lunch at Old Airport Hawker Centre, they were joined by an elderly man, who barged his way to their table and started talking to himself.

Instead of turning away from the elderly man in disgust like some of us would normally have done under similar circumstances, Elliott actually went on to share his food with him. Throughout the exchange, Elliott was seen caring for the uncle’s needs, even asking if he felt that the food was too spicy.

5. Cleaner gives up his lunch for a woman with physical disabilities

Kalam, an Indian national who works here as a cleaner, was performing a scheduled block washing at Block 103 Commonwealth Crescent when he was approached by a woman with physical disabilities who had problems walking.

When he learnt that the woman was financially strapped and was in need of food, Kalam unhesitatingly sacrificed his lunch for her – all to ensure she didn’t go hungry. 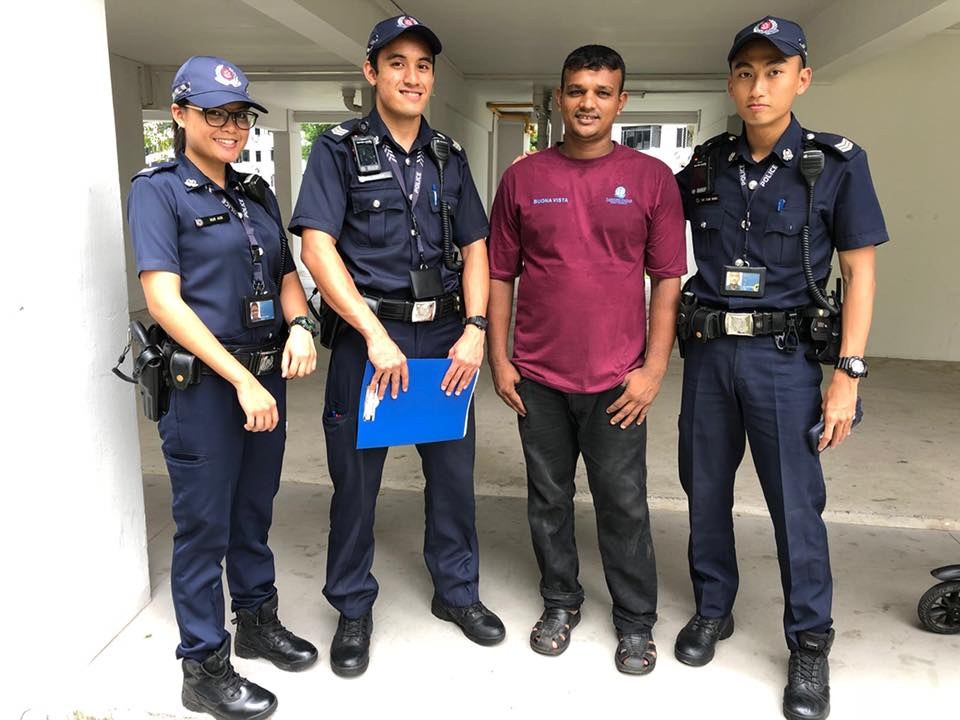 Police officers on duty learned about Kalam’s kind deed while making their rounds in the estate and shared it on social media.
Image credit: Queenstown NPC

6. Elderly man opens his home to other seniors who cannot care for themselves 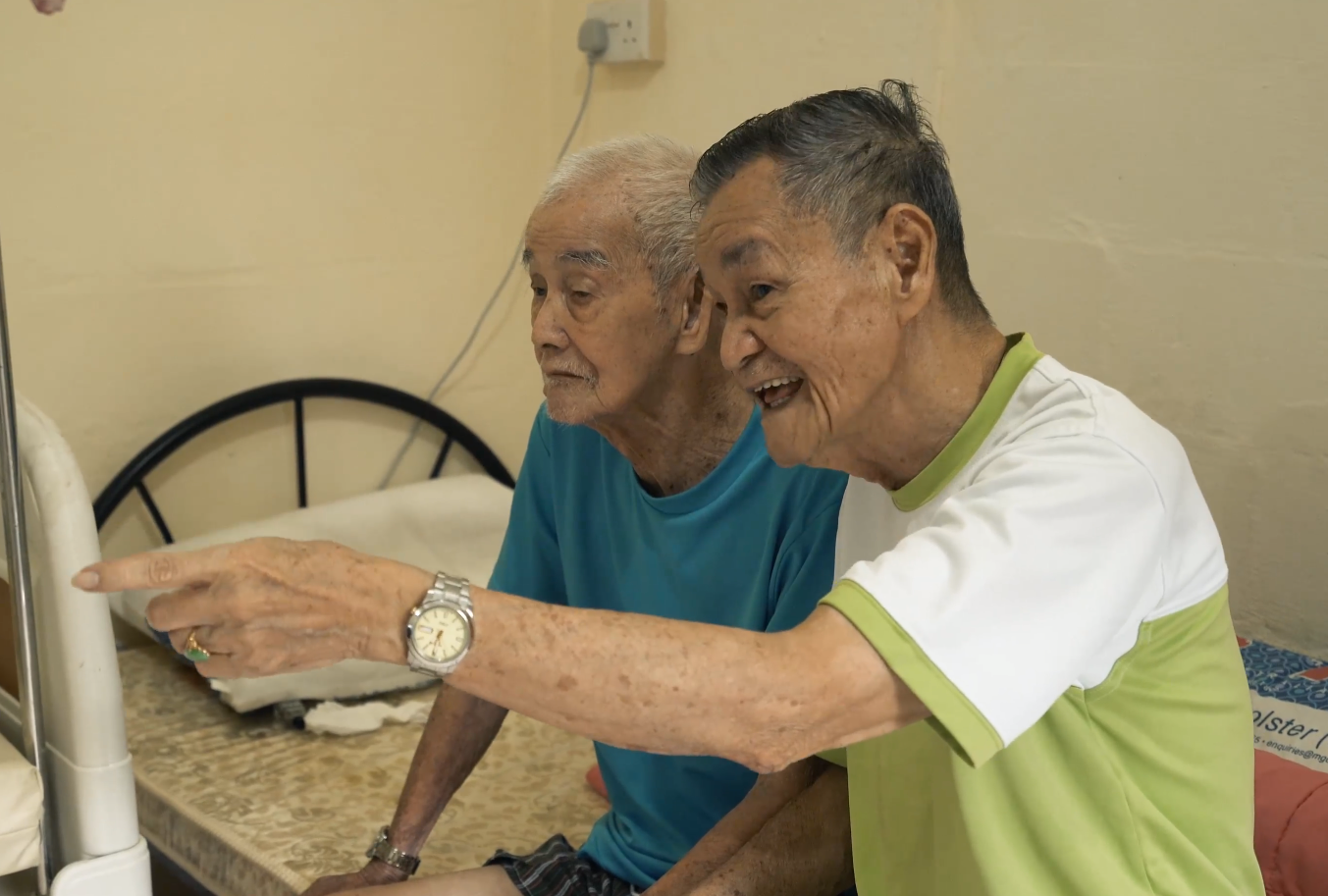 Although Mr. Lee Cho Poon is 83 years old and an elderly person himself, he is not just independent and able to look after his own basic needs, but also able to care for other seniors under his roof.

Having volunteered to care for other old folk since 1997, he currently shares his home with 86-year-old Mr. Neo, who is bedridden and cannot move about on his own. Though technically Mr. Neo’s caregiver, Mr. Lee doesn’t view him as a patient, but rather a companion.

Mr Lee is motivated by two core values passed down to him by his parents: filial piety for the elderly and compassion. He derives satisfaction from seeing that his companions are in good health and spirits, and is known to have been struck by grief when they pass on.

7. Motorcyclist gets off his bike to help an old man cross the road 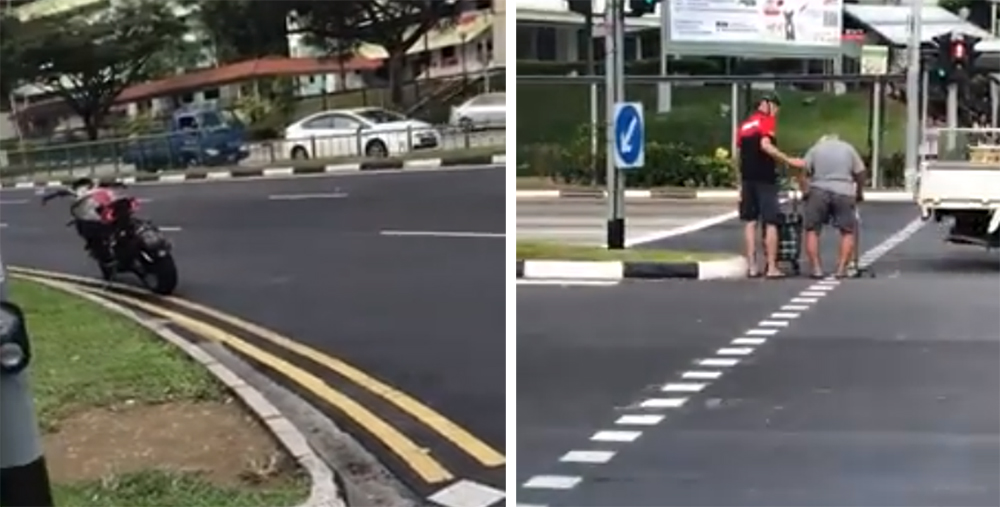 This incident was shared on SG Road Vigilante, where a motorcyclist was seen getting off his bike to help an elderly man cross the road at a pedestrian crossing. This is a far cry from the usual bevy of impatient road users who would instead horn at struggling pedestrians before zipping off.

The motorcyclist was later identified in the comments as Reyco, and he co-owns Ah Hwa Motor Servicing with his father in Yishun. Known to be honest in his business, Reyco’s gracious act comes as no surprise to his regular customers.

8. Woman helps an elderly man clean up after he soils himself at a supermarket 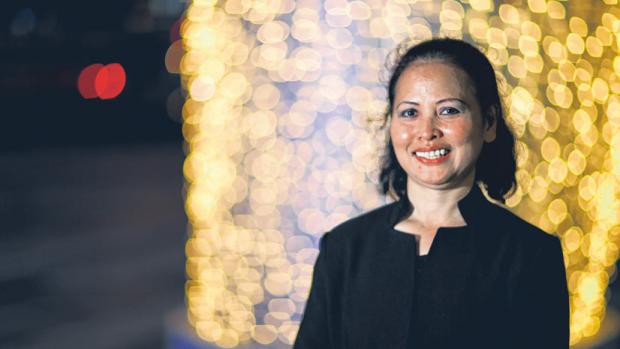 Mdm. Noriza A. Mansor was working as a bedsheet promoter at the FairPrice supermarket in Toa Payoh HDB Hub when she caught a whiff of a foul stench in the air. While everyone else around her shied away, she instead went to investigate its cause.

That’s when she found Mr. Tan Soy Yong, who had defecated while grocery shopping with his wife. Mdm. Noriza then went ahead to buy a new pair of shorts for Mr. Tan, before taking him out of the supermarket to help him clean up.

Even after the incident, Mdm. Noriza continued to visit them on her off days, stating that she viewed them as her adoptive parents.

9. Otter watchers come together to rescue a pup separated from its family 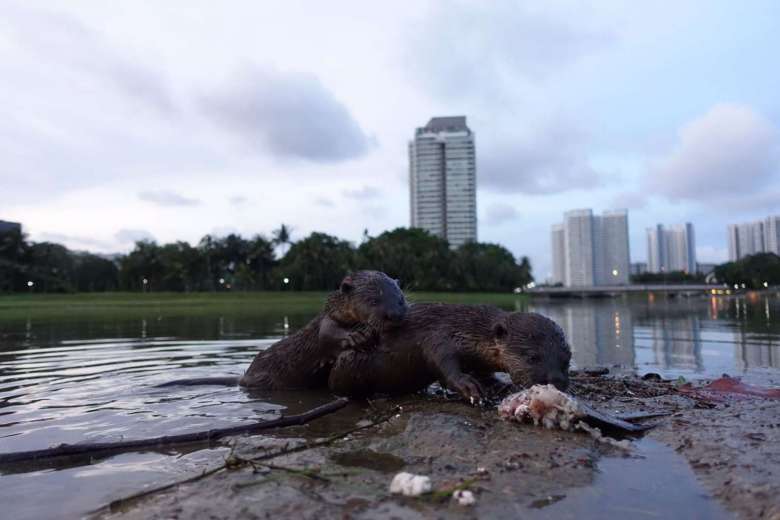 The two otter pups who were separated from their family
Image credit: Nick Soo

Acts of kindness extend beyond merely human-to-human interactions. This is proven through an incident involving the famous Bishan otter family when two of the younger ones were separated from their older siblings at Kallang Basin.

While one of them managed to find its way back to its family, the other wandered off and went missing. 15 otter watchers, including N. Sivasothi and Nick Soo, then worked tirelessly to search for the adolescent otter, which was exposed to threats from predators like large fish, herons, and snakes.

Thankfully, the otter watchers managed to locate and retrieve the pup with a laundry basket before returning it to its family

Give back to society through the President’s Challenge

It’s most certainly heart-warming to see that acts of kindness do happen more often than we think they do right here in Singapore. If anything, the above stories serve to dispel the myth that we are a selfish, ungracious bunch and serve as inspiration for us to look out for the people around us.

And you can start your kindness journey by making a contribution to the President’s Challenge, an annual community outreach and fund-raising campaign committed to assisting the less fortunate in our society.

The Employment Support Programme by SPD is one such programme that has helped service users like Xian Min, who was diagnosed with Brittle Bones disease, find independence and employment options by equipping them with useful skills for the future. 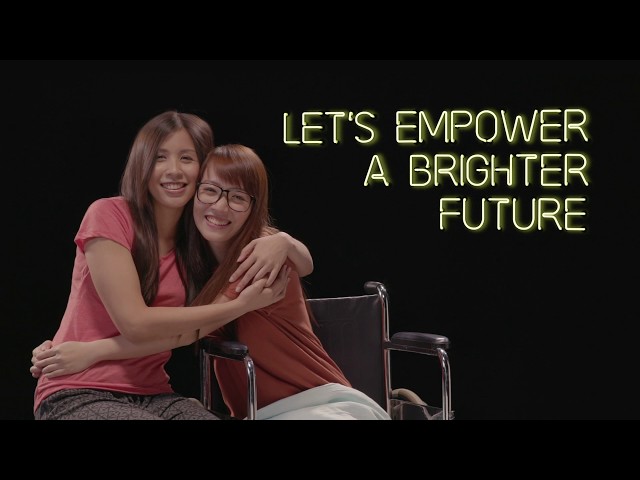 Your donations* will go a long way to ensure the longevity of these programmes, thereby reaching out to more people who need help in our society.

Make a donation to the President’s Challenge here!

This post was brought to you by the President’s Challenge. 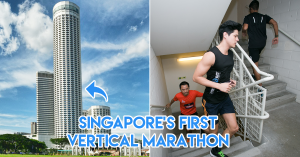 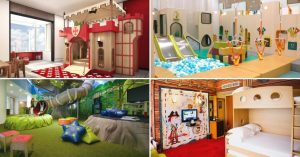