Celebrate CNY by the riverside 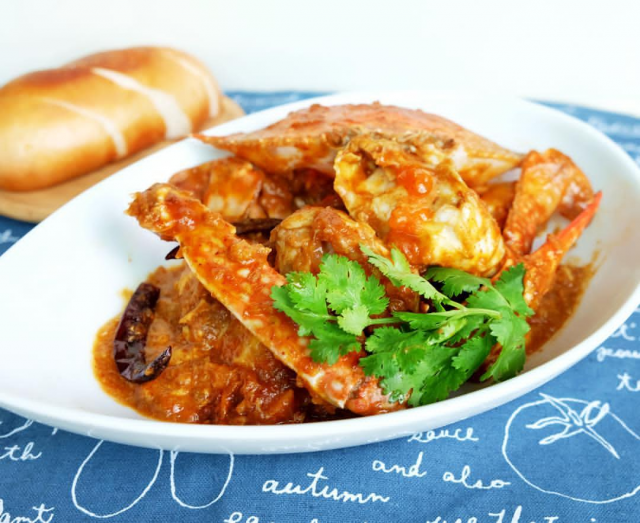 There’s something calming about dining by the water that will make the start to your Lunar New Year a great one. Why bother cleaning up and preparing food for your friends when you can dine at the most happening riverside venue in Singapore today! 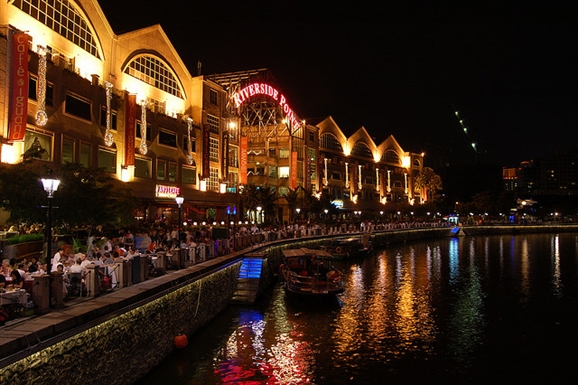 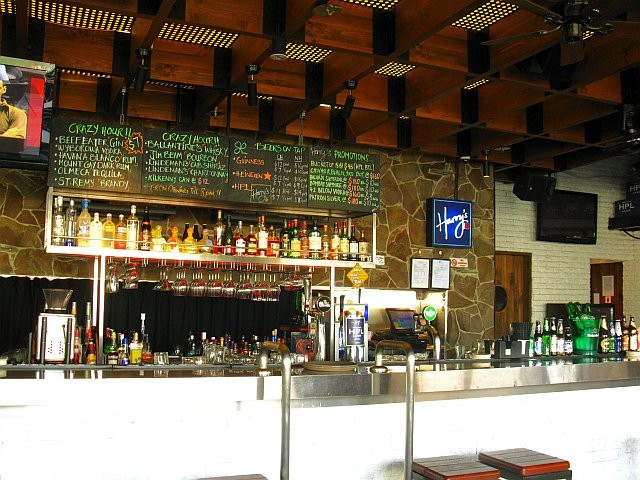 Known for its chill vibes and wide alcohol selection, Harry’s wasn’t too big on the food scene until early 2015. After revamping their menu, it comes packed with everything a foodie like myself would expect from the bar/bistro setup that Harry’s has going. 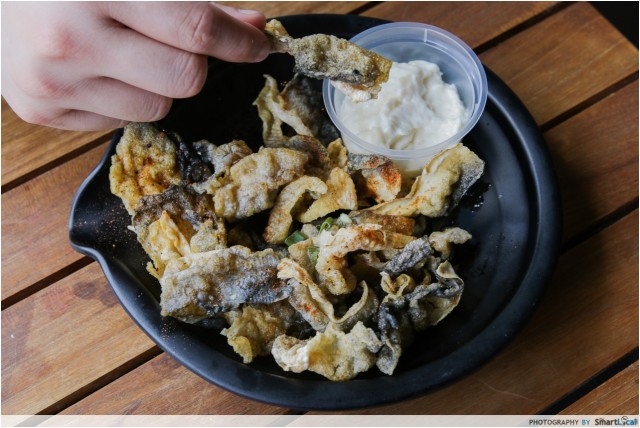 The Fish Cracklings ($13) on their Small Plates menu, is a standout dish. Although the dish itself says “Fish”, the skin used for frying is from eels – not that you’ll be able to tell. The crisp and light skins were dusted with a spice powder and served with a tangy aioli. The fish cracklings were so incredibly delicate and had a great crunch. 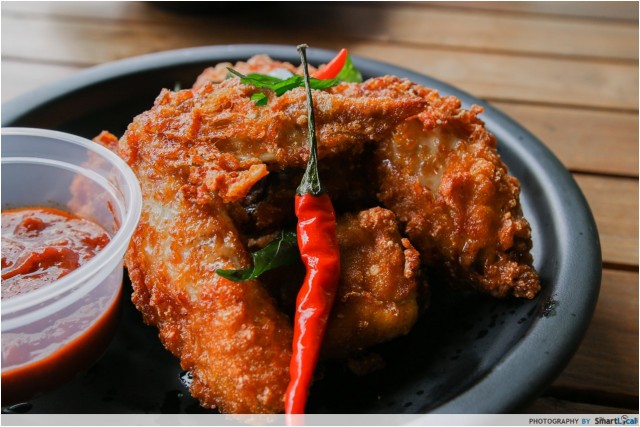 Another hit at the table was Harry’s Signature Wings ($13). The wings were doused in spicy sauce reminiscent of buffalo wings and served with a tomato based sauce which packed additional heat. The coating of sauce was expertly done, the chicken wasn’t drowning in sauce and retained a nice crispy exterior. 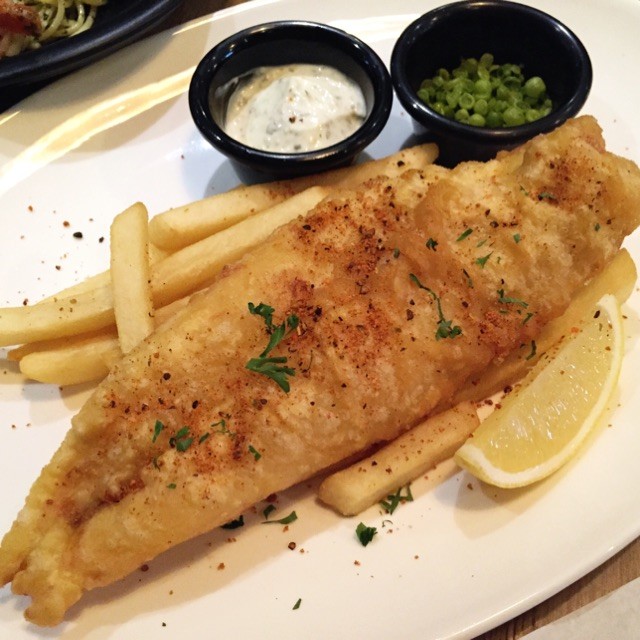 One of the big plates that’s worth ordering is the Harry’s Beer Battered Fish & Chips ($22). The batter is made with Harry’s Premium Lager and coats a fresh hake fillet. The texture of the hake was brilliant, it had a nice bite to it which was unlike the usual cod.

Served alongside the fish and chips was a small portion of mushy peas which reminded me of Sunday nights in British pubs. Combining the crispy fish with the peas almost brought me back to London for a split second! 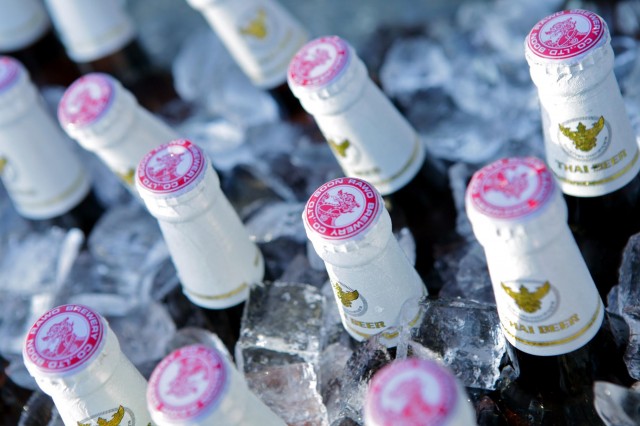 Harry’s CNY promotion happening from now till 6 March allows diners to grab themselves 5 bottles of Singha beer for just $49! Even better, if you’re a Harry’s SG App (iOS, Android) member, you’re entitled to an extra bottle when you flash your membership card. After work drinks have never looked so enticing and affordable. 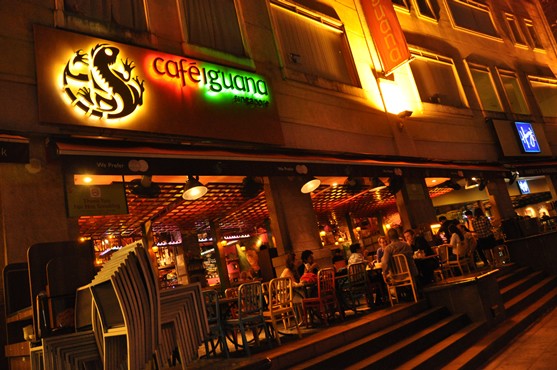 Cafe Iguana has a reputation for serving some of the most authentic Mexican food in Singapore, with its colourful chairs and classic Tex Mex decor bringing a sense of vibrancy and excitement. And to bring in a slice of Chinese New Year into this mini Mexico, Cafe Iguana is offering 50% off all their margaritas after 10pm! 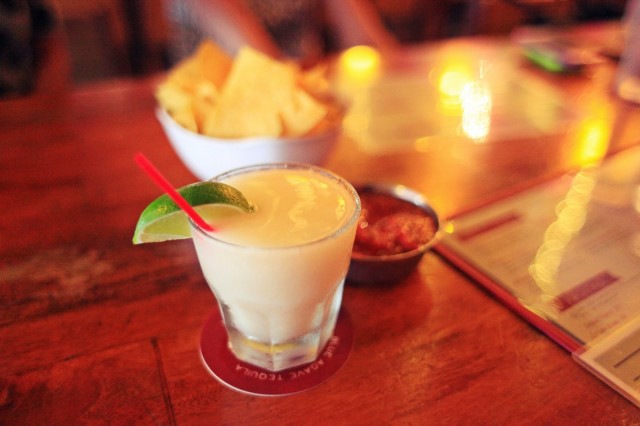 The Frozen Lime Margarita ($12) comes served with a bowl of tortilla chips and a small dish of homemade salsa. The margaritas here are all made with 100% agave tequila and syrup, which is the original – and best – way of preparing the drink. It was fully loaded on booze and packed quite a punch, and also had beautiful citrusy notes from the lime and syrup. 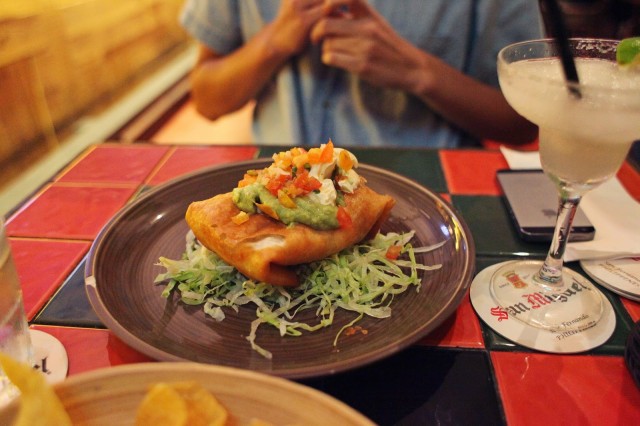 Their Shredded Steak Chimichanga ($25) isn’t something that you’ll find at any Mexican restaurant in Singapore. It takes quite a bit of work to deep fry a entire burrito to perfection, which is why most restaurants leave it off the menu.

The chimichangas here at Cafe Iguana are crispy and slightly flaky but not greasy at all. Served with huge dollops of guacamole and sour cream, it was a sight to behold. The inside of the dish was steaming hot and moist, it wasn’t dry at all despite being cooked twice. 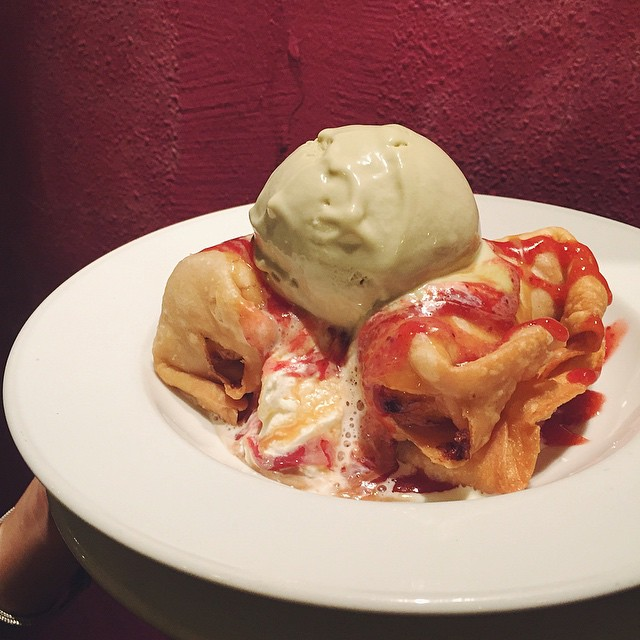 Much like the main courses here, the desserts are incredibly sinful and indulgent. However, if you don’t mind the calories, order their Banana Chimichangas ($14). It’s a Mexican version of goreng pisang with avocado ice cream, caramel and strawberry sauces. The ice cream is hard to fathom – you wouldn’t place avocado in a dessert but it works so wonderfully.

The natural creaminess of the avocado lends itself to the ice cream in a way that complements the crispiness of the chimichangas. Definitely the dish of the night.

Cafe Iguana’s 50% off margaritas after 10pm every day means you’ll only be paying $7 per glass! And with Cafe Iguana’s wide variety of margarita flavours, you’ll definitely be spoiled for choice. 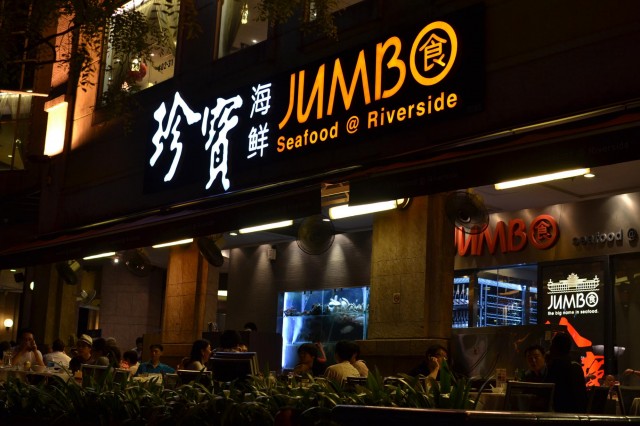 The first time I had chilli crab, it was at Jumbo Seafood, and I loved every finger licking minute of the whole meal. There were no bibs backs then so my white shirts came out of the meal stained.

The Jumbo Seafood today is different from before, but they still have the dishes which speak to my inner child. However, they have since evolved and enhanced their repertoire, creating new and innovative dishes which push boundaries. 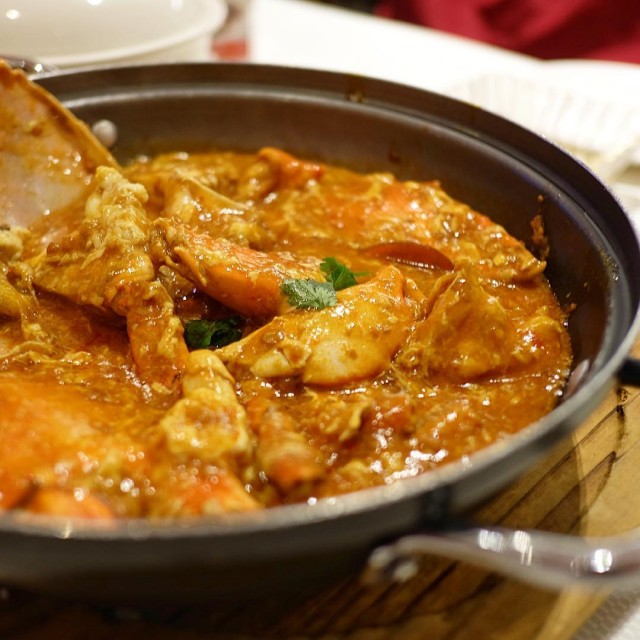 However, their signature dish is still their Jumbo Chilli Crab (seasonal prices). Unlike other variations of the dish, the chilli crab at Jumbo has less spice and has a stronger tomato based flavor. It is thick and luscious and goes extremely well with their Fried Mantou (2 for $1.20). Just dipping the bun into the sauce alone could be a meal in itself, and when you add the sweet crab meat, it’s euphoria in one mouthful. 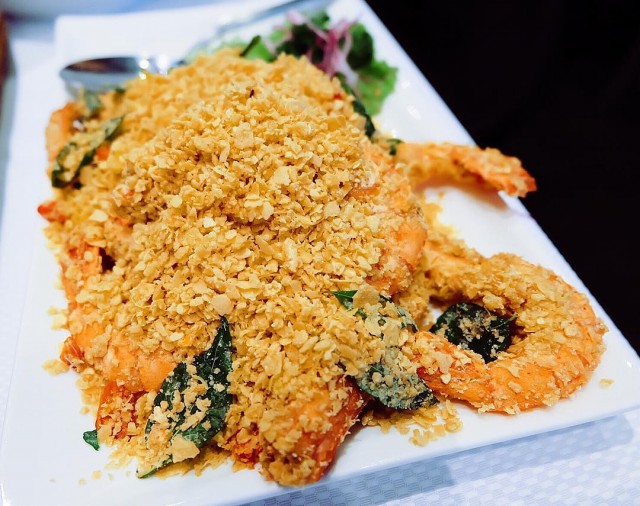 Another standout dish at Jumbo is their Cereal Prawns ($20), made using the freshest prawns. This dish comes with either deshelled prawns or with the shells on, but the latter is highly recommended. The cereal prawns are wok-fried to a nice golden brown which makes their shells (including the head) completely edible. Imagine eating a prawn-infused cereal chip – that’s what biting down on the prawn head feels like. 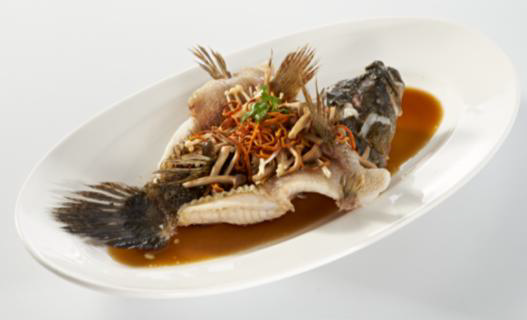 For this year’s Chinese New Year celebrations, Jumbo has introduced some brand new dishes. One of the new dishes is the Live ‘Soon Hock’ Steamed with Cordyceps Flowers (seasonal pricing). This dish is light, and the cordyceps flowers is commonly used in Chinese medicine to boost your immune system. Above all, it caters for diners of all ages, making it great for a reunion dinner when you have family members from all walks of life.

Jumbo has multiple Chinese New Year set menus available this year ranging from $228++ to $1228++ for a table of 10. The different menus cater to groups with different budgets or specific tastes. For example, it is possible to not have Shark’s Fin with their Set Menu G. A list of their menus and prices is available here. 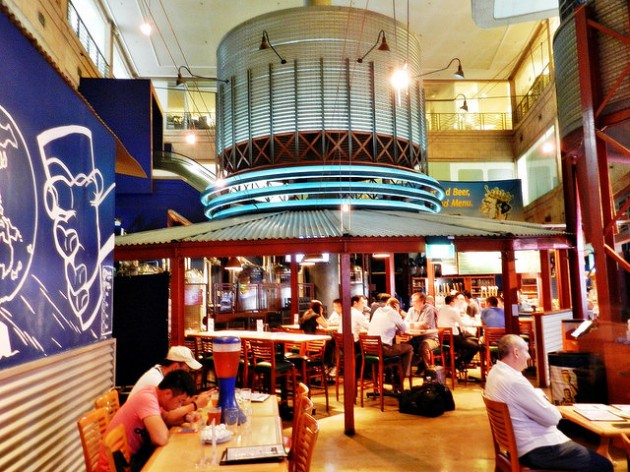 I’ve heard many stories about Brewerkz but I’ve never made a trip down to try their food and booze. Brewerkz feels like more of a sports bar than a proper restaurant, with various sports often being screened – I had my eyes glued to an Australian Open game while stuffing my face silly.

A good test for any sports bar would be their burger and chips, so I ordered their Brewhouse BYO ($21) which allowed me to customize my own gourmet burger. 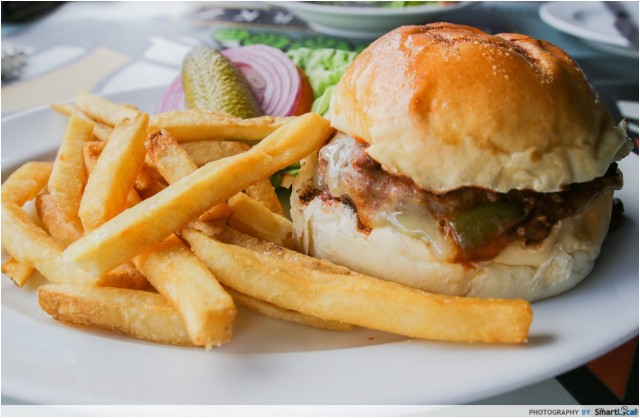 I added beef chilli and cheddar cheese to my burger, and although the appearance left a lot more to be desired, the flavour was on point. The patty was cooked to a nice medium well, and served with half a pickle, fries and a small salad. The fries were well cooked – I liked that they left the skins on which gave the fries more body and extra flavor to boot. 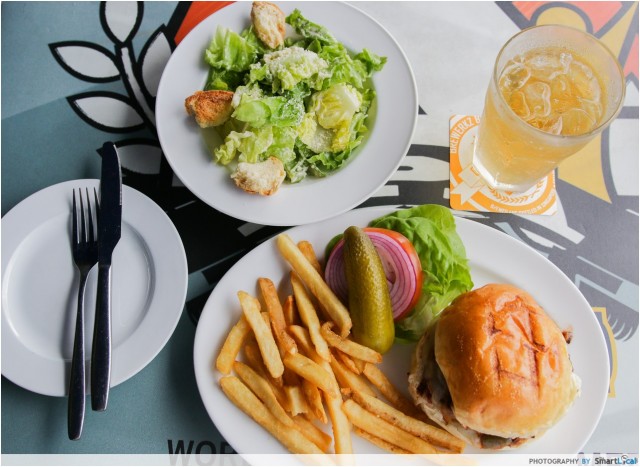 The stars of the show at Brewerkz were their homemade beers and ales – if you’re bringing a couple of friends try their Beer Sampler ($14) which comes with four different signature beers. 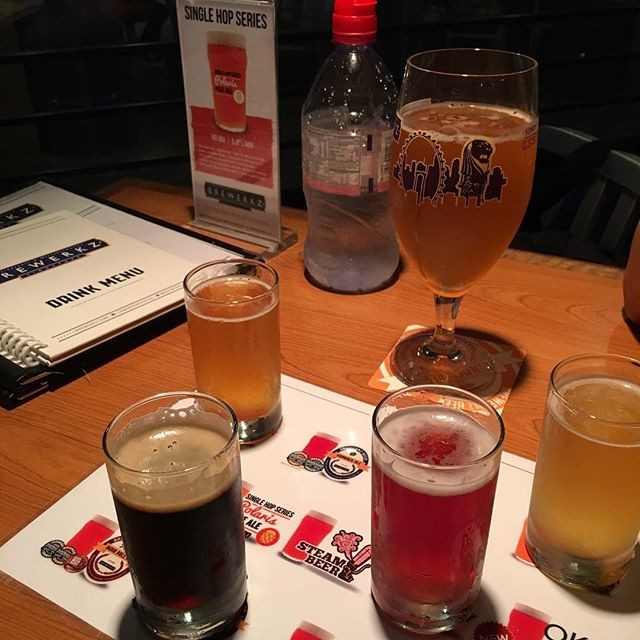 The Golden Ale, which came highly recommended, had a nice nutty flavour to it and reminded me of tea biscuits. It was refreshing and didn’t have a very strong bitter aftertaste to it.

Brewerkz is also offering happy hour prices all night long from Sundays to Thursdays, which means beer prices start from just $10! With its decent food and affordable beers, Brewerkz is a great alternative for anyone looking to start their CNY celebrations on a high.

Dine and wine by the riverside this CNY! 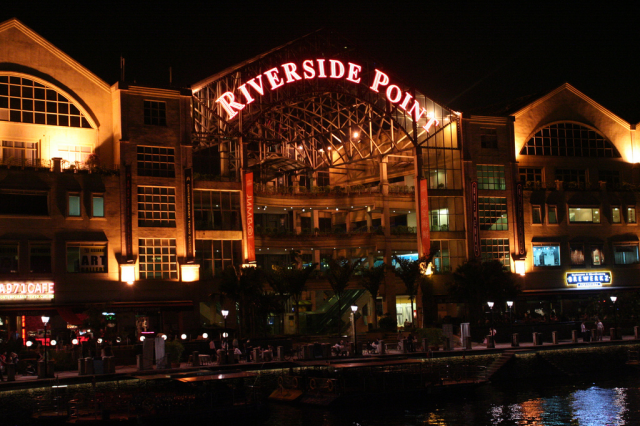 Brewerkz, Jumbo Seafood, Cafe Iguana, and Harry’s are all located at Riverside Point, the stretch of eateries everyone knows that’s close to the clubs.

Riverside Point is having a Chinese New Year weekend promotion right now. Diners who spend a minimum of $80 will be eligible to take part in an Instant Lucky Dip between 6pm to 9pm every Friday, Saturday and Sunday until 21 February 2016. However, the offer is only limited to the first 88 shoppers every day, so make sure you come down as early as you can!

Getting to Riverside Point

With traffic jams being rampant on most nights, it’s almost easier to just take public transport. Especially if the place you’re going is within walking distance of the station. 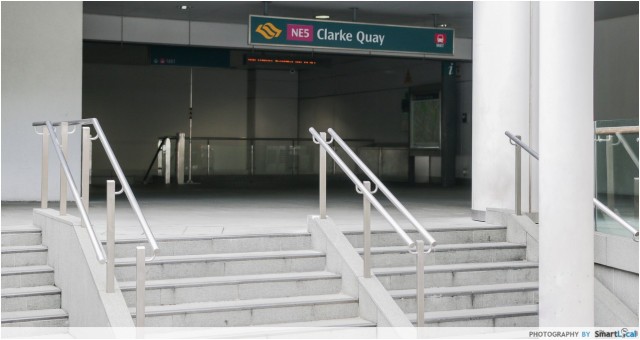 Riverside Point is located just a stone’s throw away from Clarke Quay MRT Station. Just use Exit C, climb the lengthy flight of stairs and turn right. After walking a short distance you should see Jumbo Seafood in the distance.

If you see Swissotel Merchant Court on your left and Read Bridge on right, you’re on the right track. Just a couple more minutes and you’ll be dining by the riverside!

If you’re driving down to Riverside Point, there’s plenty of parking available. Besides parking at Riverside Point itself, you can also park at Clarke Quay Central and take a short walk along the riverside. 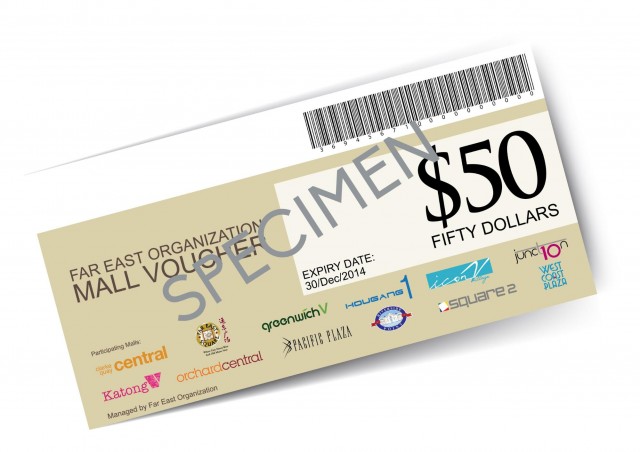 If the CNY deals weren’t enough to seal it for you, Riverside Point is giving away 5 X $50 dining vouchers to TSL readers! All you have to do is:

The contest will end on 12 February, 6pm. Good luck!

This post is brought to you by Riverside Point