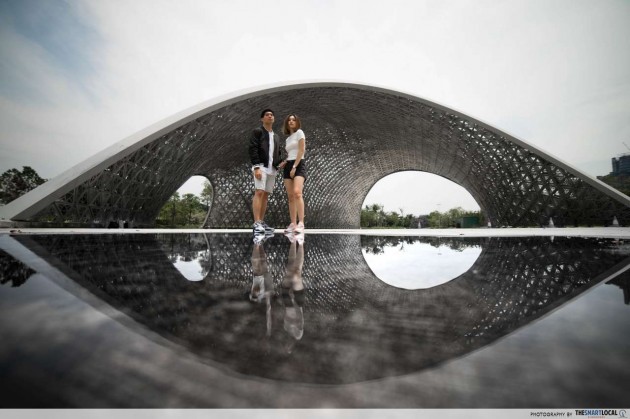 Do away with the archaic and stock mirror OOTDs, and ring in the modern era of #reflectiongrams. This revolutionary way of taking mirror shots will seem like you’ve found a time machine to transport you a millennium into the future when in fact they’re just every day sights in Singapore.

You need no amount of quantum physics to travel and find these places. All you need are Google maps and a creative eye to find the magic angles. Capturing shots in these locations will propel you into becoming the forerunner of avant-garde and hypebeast. 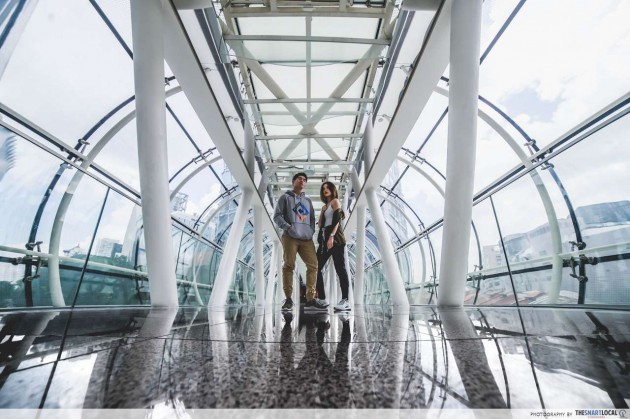 In the foray of a shopping frenzy in Orchard Road, the only reflection one will catch is in the toilet mirrors. At first glance, The Tube @ Orchard Gateway might seem like any normal link bridge; but through the camera lense from the ground up, it will look like a tunnel to another dimension. 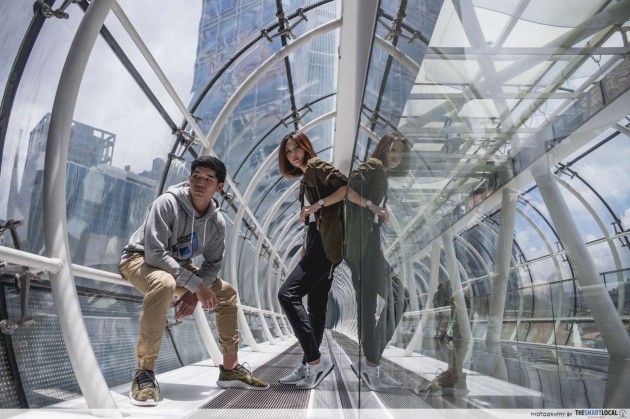 The glass panels and marbled floor that line the bridge make it easy to take shots of your reflection from any angle.

Tip: Head down on a weekday afternoon to avoid mass public scrutiny.

On him: Adidas Men’s Tubular Shadow
On her: Adidas Women’s Pureboost Xpose 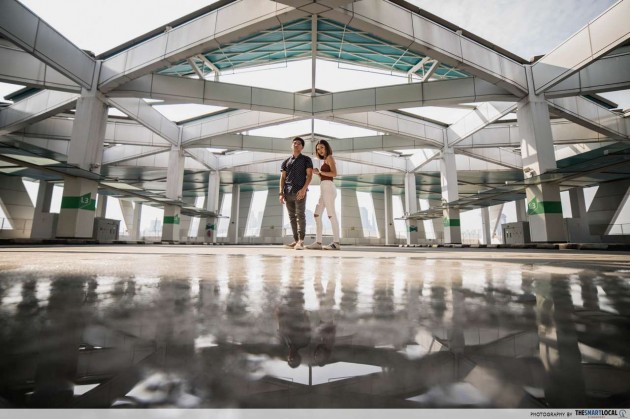 The car park at Marina Bay Cruise Centre is a feast for the eyes of anyone who absolutely needs their pictures to be perfectly symmetrical.

The crisscrossed metal structure above you will create the image of a white-washed kaleidoscope. Finding the different angles to shoot here will give you a range of shots with elements from optical illusions to the next billboard top 50 album cover. 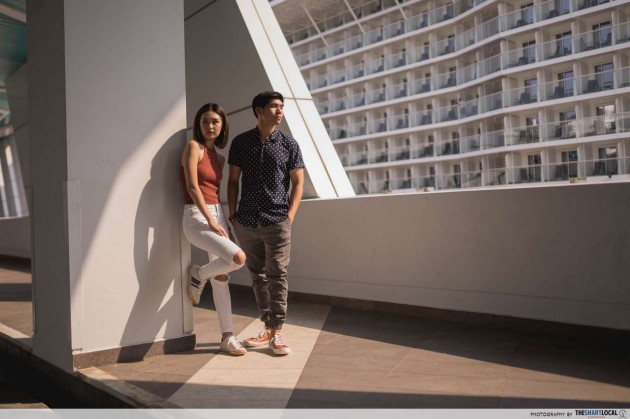 On a clear day, you can even enjoy the view of the sea and catch the sunset.

P.s. Shooting during the ‘Golden Hour’ gives you that perfect no-filter filter thanks to the natural rays of the setting sun. 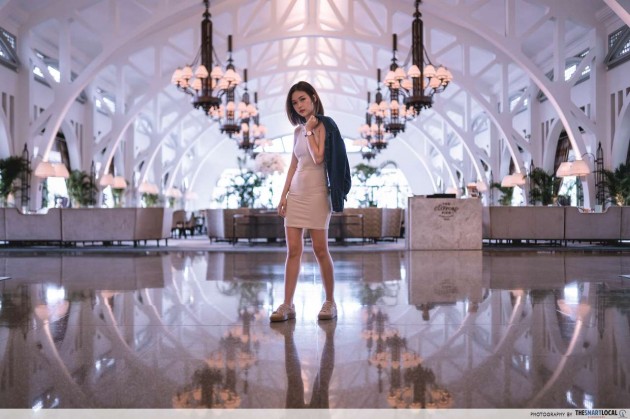 The 5-star rating of The Fullerton Bay is not ‘all talk and no show’. It lives up to its reputation with its sleek, pure white interior, classy furnishing and well-polished floor. 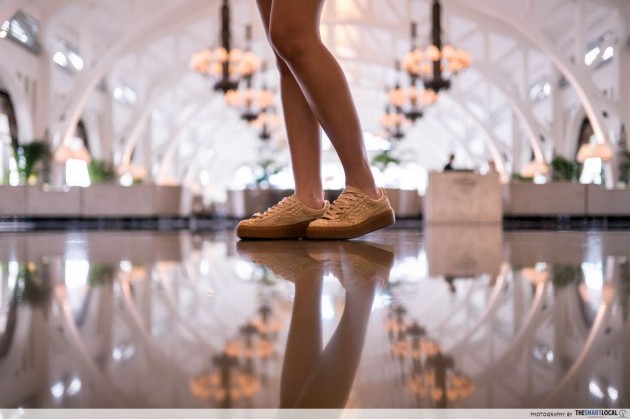 The futuristic-looking and classy lobby is where you can live out your home goals and pretend to be Jay Gatsby pimping your grand, future home.

Not to worry, you don’t have to blow holes in your wallet to get a shot here because the lobby is open to the public.

Geolocation: 1°17’02.2″N 103°51’13.4″E
Directions: From Raffles Place MRT Station, exit to Clifford Centre. Take the OUE LINK bridge across the road and head down. The Fullerton Bay will be straight ahead.

4. Future Of Us Exhibition @ Gardens By The Bay 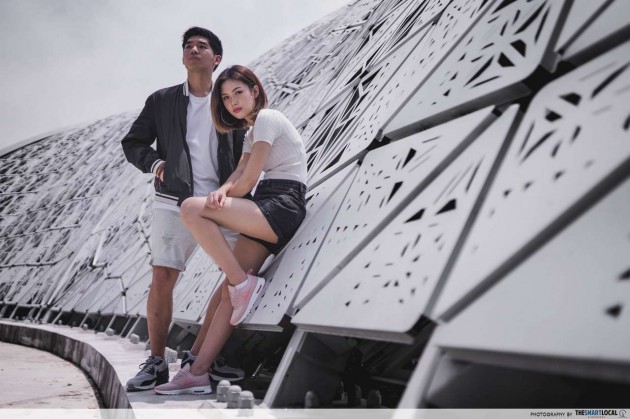 Seeing how most people walk past without a second glance, it would seem as though The Future of Us Exhibition has been forgotten. But when you enter the belly of this sleeping, metal beast, you’ll be amazed by the intricacy of the metal interior. 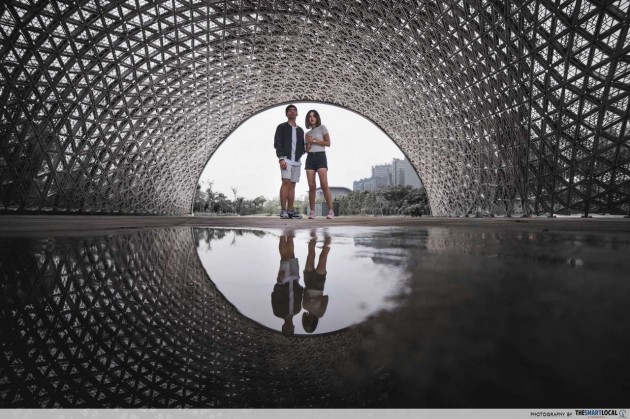 The perfect reflectiongram can be obtained right after a heavy downpour when the ground is still flooded with water. The reflection will create the illusion of a spiralling metal web and give you your epic shot. 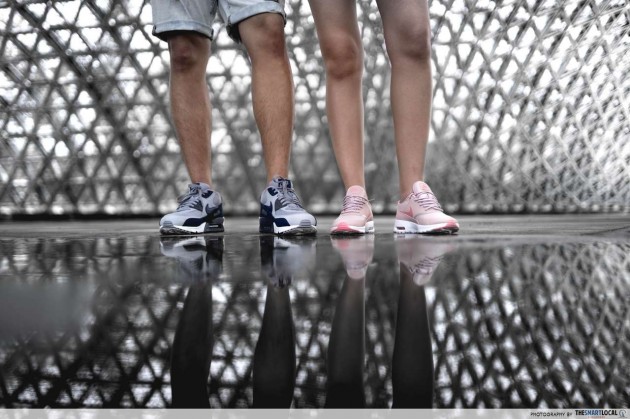 Spend your day taking shots from different angles and forming different shapes. There’s not a soul here so you can even lie down without anyone judging you for going to such extremes.

Geolocation: 1°16’51.6″N 103°51’39.6″E
Directions: From Bayfront MRT Station, take the underground passage towards Gardens By The Bay. Head to surface level and you will see The Future Of Us Exhibition. 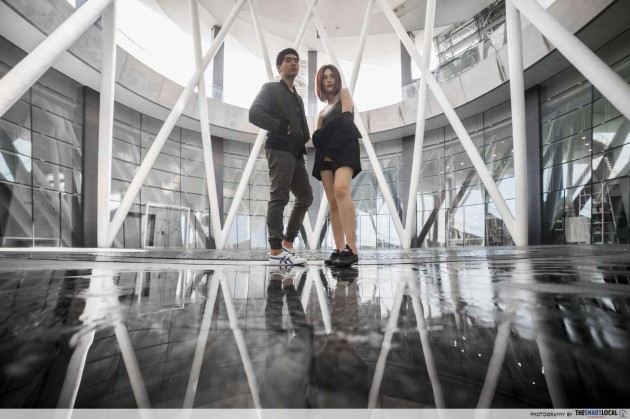 The modern dome-like interior of the ArtScience Museum with its X-shaped pillars will be the ultimate test of your versatility in creativity, using whatever you have to create a reflectiongram. Like the Future Of Us Exhibition, water is imperative for your reflectiongram. 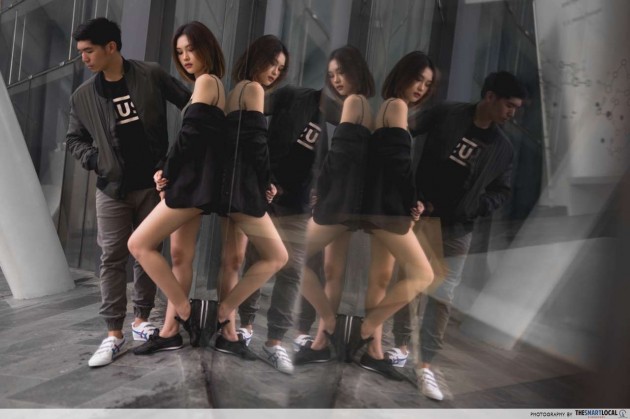 Wait at least a couple of hours after rainfall to avoid a wavy-blurred effect from the reflection of the rippled water. You can also make use of the large glass panels that line the dome to create multiple reflections. 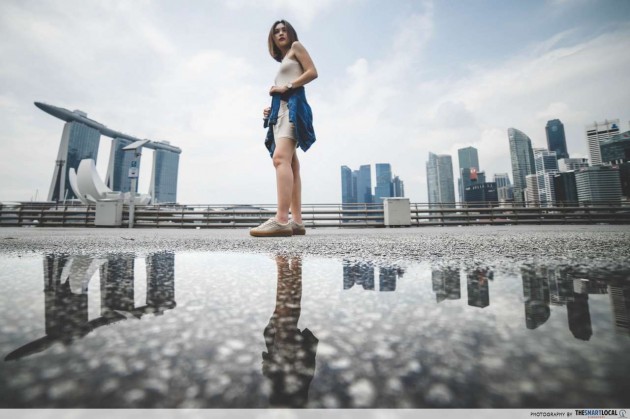 As tourists stretch their arms up to the skies to capture the skyline of Singapore at the bay area, you’ll be receiving curious looks from them as you take pictures from bottom-up. 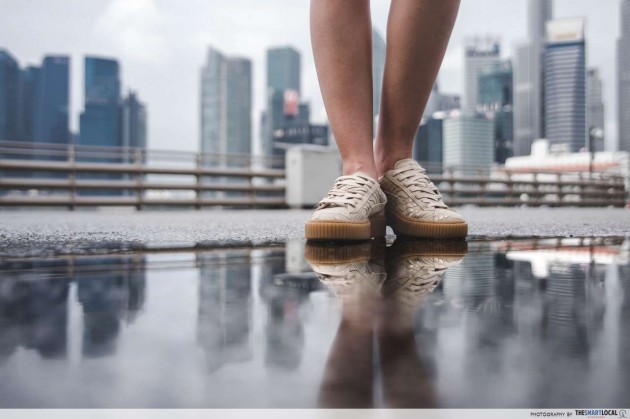 Your reflectiongram will be like an alternate universe, creating an upside-down version of Singapore as you see the iconic Marina Bay skyline mirrored below your feet. Pray to whatever divine power out there for sufficient rainfall followed by good weather to get a substantial puddle of water and good lighting to get the reflective shot.

Geolocation: 1°17’19.8″N 103°51’31.1″E
Directions: Walk out from the Esplanade towards the Esplanade Outdoor Theatre and turn left towards The Float @ Marina Bay. The entire stretch below the Grandstand is where you can take the reflective shot. 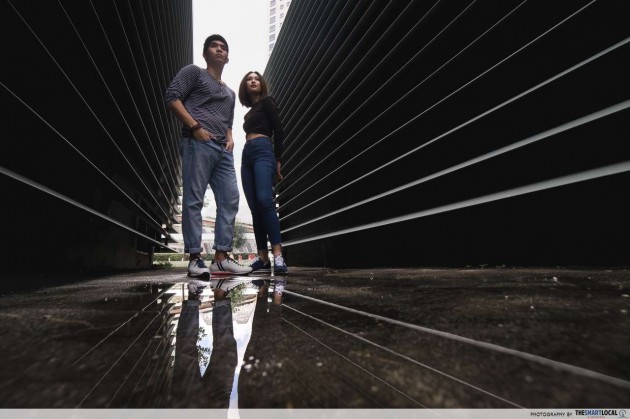 You don’t necessarily need a circular backdrop to achieve a reflectiongram. All you need is a reflection and you can make use of whatever’s around you.

When you spot these vents a mile away, you will think nothing much of it – just another structure in the middle of nowhere. Make your way closer and the distinct futuristic lines on the vents will draw you in with the wonders you can conjure in the small narrow area. 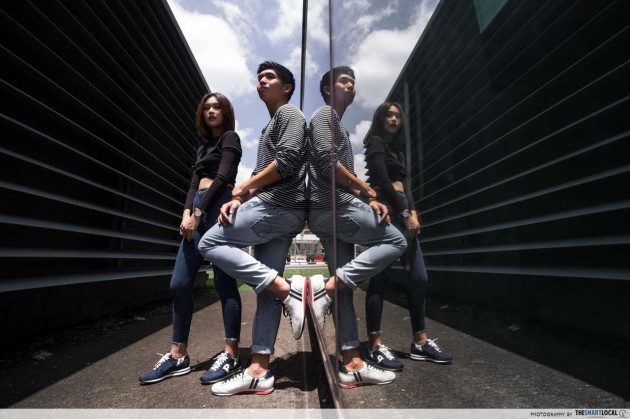 Take laidback photos of yourself hanging loose in between the vents and trick your friends into thinking that you’ve found a more hipster wall than the usual pantone-coloured ones to chill out.

Anything can be a cool wall as long as you look close enough.

On him: Patrick Nevada II Salt
On her: Patrick Cornwall Navy 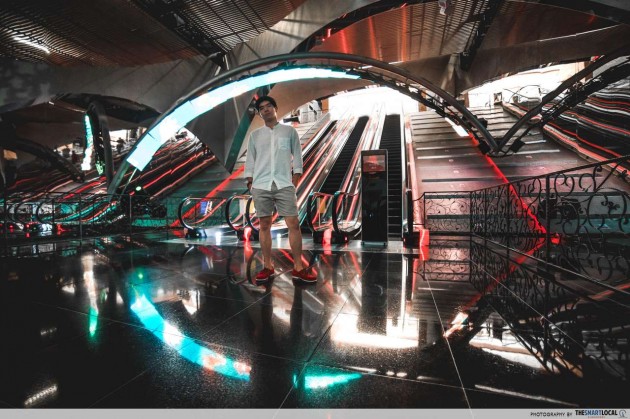 Resorts World Sentosa is most famous for the casino and USS, where throngs of tourists flock to. It also has a futuristic gateway to ground level, that most people miss in their excitement to get to the main attractions. With red and blue neon lighting in contrast to the dark background, any picture here looks like a scene straight out of Tron. 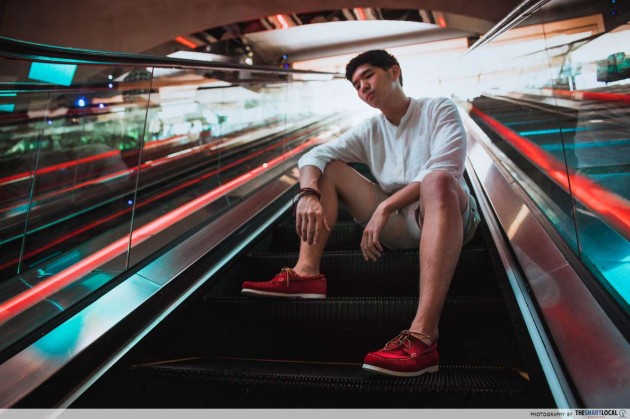 Make use of the closed escalator to take close-up shots without humans coming up from behind you and photobombing your picture.

Human traffic here is immense but there are rare moments you can get shots without the ceaseless string of people travelling up and down the escalators. Patience is imperative and worth it.

There are many places in Singapore to get a reflectiongram but most of it require a creative eye, some effort and a whole load of confidence. 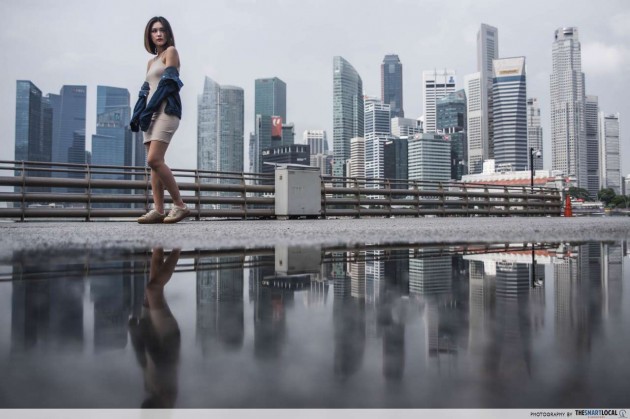 If a dry spell is putting you in a tough spot, do not despair. It just takes a little more effort to lug around 1.5 litre bottles of water and make a DIY reflective surface. People will give you curious looks while you water the floor but that’s one of the ways we managed to get the perfect reflection. You will receive judgemental glances, as you lie down and go into contorted, awkward yoga positions to get the perfect angle. But who cares when you can get reflectiongrams that throw people into a mind-boggling conundrum, figuring out the angle which they were shot from.

For prolific instagrammers, all this must be done in the name of creativity.

Perfect shoes for the perfect shot

It would be a huge mistake of an anachronism if your reflectiongram were to be utterly ruined by a pair of Crocs. STAR360, a multi-label concept store, is the place to fulfil your dreams of upping your fashion game. Carrying a diverse range of streetwear labels from highly coveted hypebeast brands like Nike and Adidas to classy brands like Polo Ralph Lauren, you’ll be spoilt for choice. 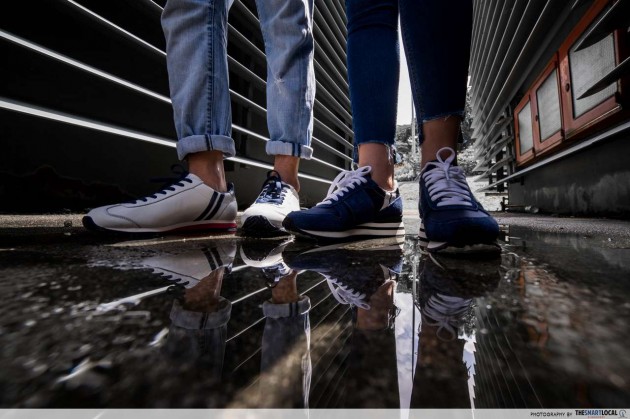 Patrick has come a long way since its infancy in 1892. The styles pay homage to its French origin but also incorporate modern Japanese craftsmanship. With its sleek retro designs and comfortable makes, Patrick shoes present a combination of both utility and style – great for traveling to the ends of Singapore for those reflectiongram shots. 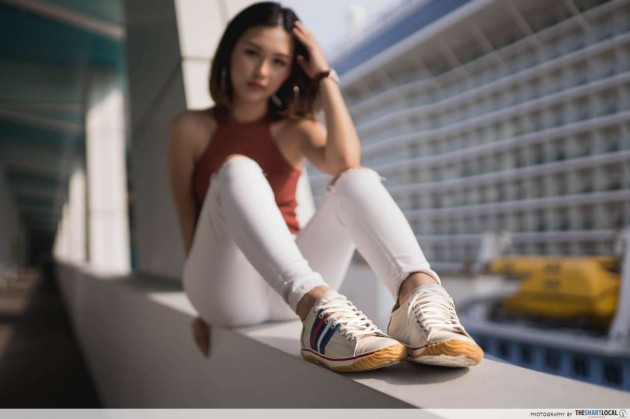 The tricolour SPM-198 is made with cow leather that’s both light and comfortable.

If being non-mainstream is all the rage for you, Spingle Move is what you need. Each and every pair is delicately handcrafted, giving you the best quality and workmanship in a shoe.

You won’t have to worry about the shoes falling apart from frequent use either, because the shoes are made with high-quality rubber soles and premium leather. With emphasis on high quality, Spingle also uses kangaroo leather which is a rare leather in the shoes industry for its durability. 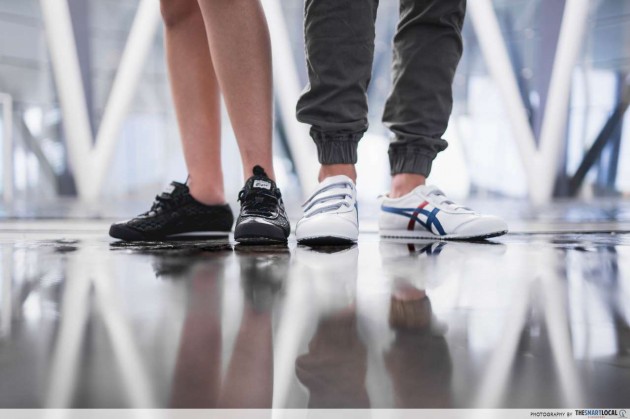 The famous tiger stripes on Onitsuka Tiger shoes are synonymous with sporting triumph, making the shoes go with any street-style outfits. Doing away with the laces, Onitsuka Tiger takes a new approach in style and function with velcro and slip-on which are hot-sellers at the store. 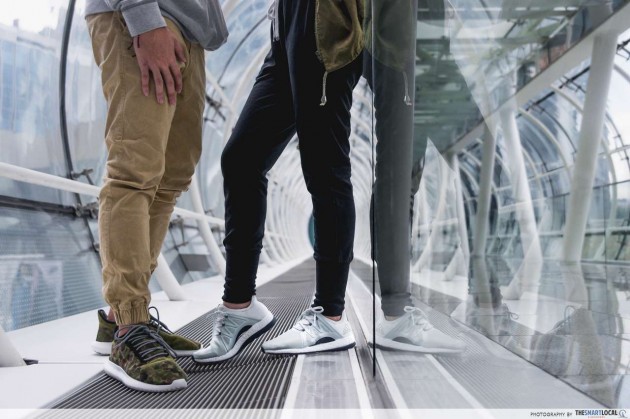 If you’re a huge sneakerhead with a burgeoning collection kicks, this is the perfect opportunity to give every one of them a bit of spotlight. We wore the Adidas Men’s Tubular Shadow and Women’s Pureboost Xpose, which made it look like we were well-dressed for Orchard Road on a dress-down day.

This article was brought to you by STAR360.

This Mural Along Orchard Road Used Air Pollution As Ink, Turning Toxic Particles Into Beautiful Art
10 Times Faith In Singaporeans Was Restored Because Singapore Is Awesome