Getting around Singapore on oBike 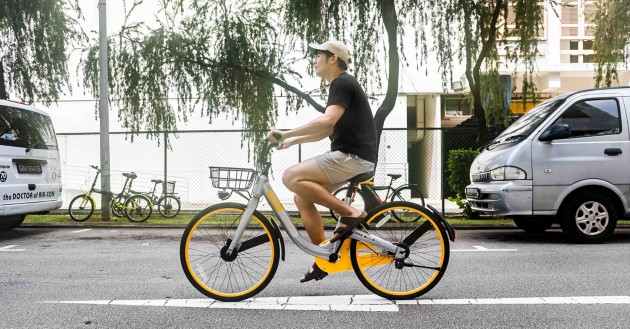 The morning rush hour is plagued with the most triggering sights: buses whizzing past my bus stop because there’s not even space left for one person, being packed into the train like a sardine and feeling the loss of a banana after it gets mashed up in my bag.

With the #fitspo life being all the rage now, oBike’s bike-sharing system has made healthy-living more convenient. oBikes can be found anywhere on the island so you can easily cycle from place to place and you won’t have the same worries you experience when using your personal bicycle. Plus, it’s the most viable option if you’re heading home late and you’ve missed the last bus/train and really don’t want to cab!

Here’s what I learnt in the 7 days I used an oBike as my only form of transport:

Note: oBike has since pulled out of Singapore

1. Cycling on park connectors is your new #1 lifehack 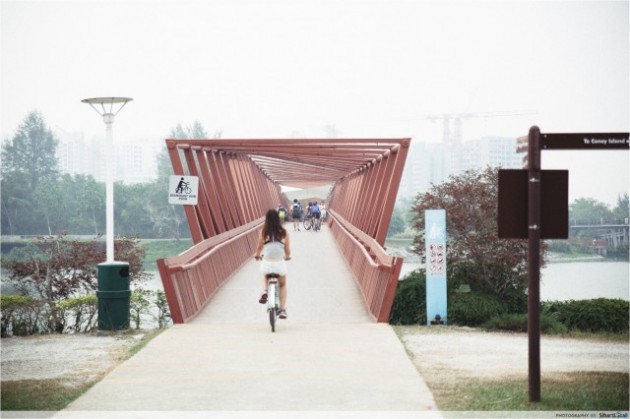 I’m indebted to the peaceful coexistence of pedestrians, cyclists and vehicles, made possible by park connectors. More cycling trails in Singapore are being linked up by park connectors, which allow cyclists to enjoy an undisturbed route from one end of SG to another.

As their name suggests, you’ll somehow reach a park as you cycle. Parks are perfect pitstops, if you’re in for the long haul. Unlike camels, we easily get thirsty and tired. So take this chance to drink up at water coolers at park connectors, rest in a pavilion and make full use of other amenities before you continue on with your journey.

2. Avoid slopes. Plan your route around them if necessary 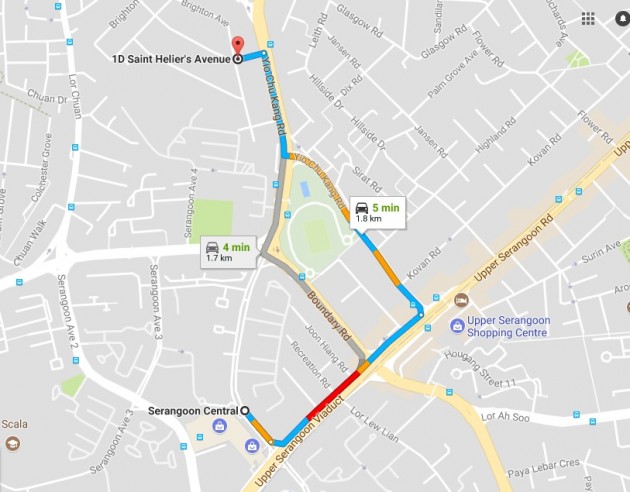 The grey route might take a minute faster but there’s a steep slope there that I would avoid.

You’re not training for an Ironman Triathlon so don’t put yourself through the unnecessary pain and exhaustion of having to cycle up slopes. The construct of an oBike makes it suitable for inclines up to the small ramps you see at MRT stations, but other than that, there are no gears for you to make cycling upslope easier.

Housing estates in places like the Bukit Timah area has monstrous slopes. Don’t even bother attempting to cycle up these slopes with an oBike. Always plan your route to avoid meeting such insurmountable slopes, even if it means taking the long way round (it’s worth the time and lowers the chances of painful abrasions).

3. It’s worth it to invest in a handphone holder for Google Maps 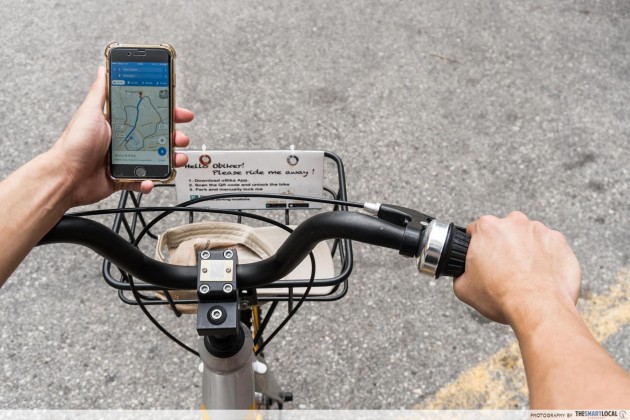 You’ll be cycling with only one hand if you don’t have a handphone holder.

While I can’t stress the importance of planning your route enough, I wouldn’t expect you to memorise the full route. This is where cycling with one hand would come in really handy – being able to refer to Google Maps with one hand and steer with the other is a skill not many have.

But since not all of us have impeccable balance, invest in a handphone holder to make your life simpler.

4. You can reserve a bike before heading for a quick errand If mum asks you to run over to NTUC to get some milk and it’s too hot to walk, you can locate a bike on the oBike app before even leaving the comfort of your room. All oBikes are equipped with a GPS tracker which shows their location on the digital map, which allows you to plan a route to the nearest bike.

You can even reserve a bike for 10 minutes to stake your claim on the nearest bike so that nobody can take it from you.

5. Don’t do stupid things with your oBike or you might have to pay more

With the mysterious cases of disappearing bikes and the bizarre phenomenon of an oBike falling from the sky, a reputation credit system has been introduced by oBike to deter such things from happening.

Bad bicycle etiquette will get your points deducted from the initial 100 credits. Anything from wrongly parking the bike to violating traffic rules will see your credit score going down.

The less credits you have, the more you’ll have to pay per ride. It can go up to $50 per ride for extreme cases (if it came to such an extreme you should be going for etiquette lessons).

6. If you report bad behaviour, you get brownie points

If you’ve miraculously decided to turn over a new leaf, here’s a chance to redeem yourself and all the points lost from misdemeanor – report on other people who have committed offences and you’ll get +3 points.

This will get you involved in the quest to make bike-sharing enjoyable for everyone. You also get points for reporting a broken bike and inviting friends to sign up.

There are rewards for good behaviour incoming from oBike so check in on their Facebook page. We’re keeping our fingers crossed for lowered prices for users with more points!

7. Always check your bike for damages before unlocking it

Imagine if everything bad that could happen, happened – going downhill with faulty brakes and the bicycle chain breaks. You would have to be really unlucky, but the foolproof thing to do that won’t leave your fate to chance is to always do a thorough check on the bike before you unlock it.

Of course, if you notice damages on the oBike, you can report it for +2 points (point #5).

8. It has unlocked cycling as an exercise option. Like running, but more scenic

Two years ago, the only time anyone would suggest cycling as a group activity was when they’re planning a gathering at East Coast Park. Unfortunately, the pushbacks often came quick: 1) bike rentals are pricey and 2) personal bicycles are troublesome to transport.

Today, with a rigid bike-sharing system in Singapore, owning a personal bicycle is starting to seem unnecessary for casual riders who only need one for an occasional spin with friends. Now, all we need to do is set a meeting point, find an oBike, and we’re set for a good day of sweating it out.

9. oBikes can be found anywhere, sometimes at your gate 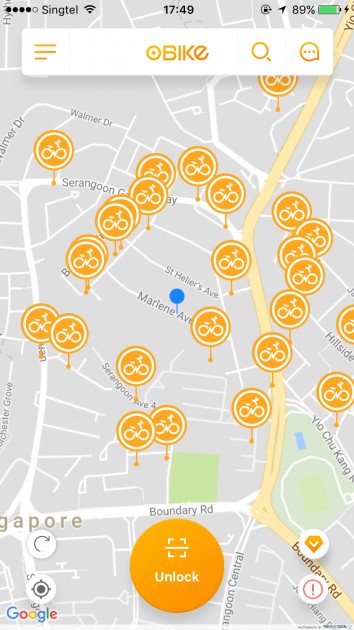 Locations of all the oBikes around you.

There’s an element of wanderlust in emerging from your home to go out in search of a bike to use for transport. But I don’t have to go to the far reaches just to find an oBike because I can usually find them right outside my gate or at the nearest bus stop.

The culture of parking the oBike anywhere makes it really convenient. This isn’t the appropriate thing to do, but parking the oBike outside your neighbour’s gate really contributes to a kampong culture, bringing bike-sharing to a whole new level of “sharing”.

I like staying out late but I’ve often found myself stuck far away from home because public transport stops operating soon after midnight. With oBikes found almost anywhere, they are my saving grace as I can simply cycle home instead of paying for a cab (with the additional midnight surcharge). 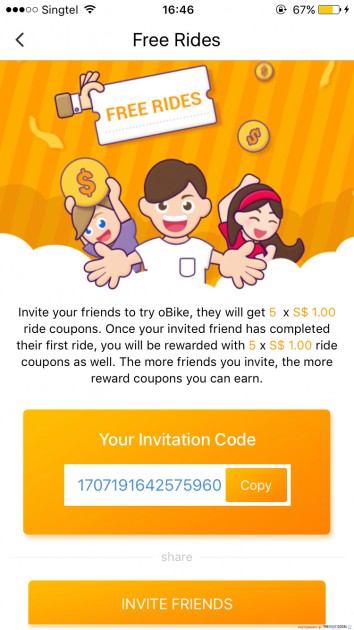 Forget about indoor cycling classes and go cycling with your real crew on spanking oBikes when you get your friends to join in the fun of bike-sharing.

With every friend you refer, both of you will get a $5 ride coupon once the first ride is completed. You guys can go crew-cycling for 2hrs 45mins for FREE. 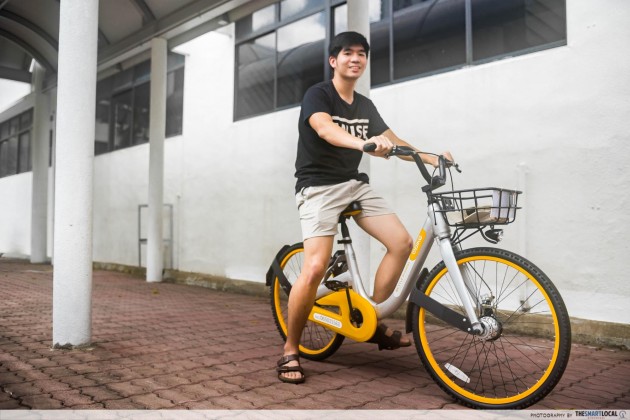 Cycling on an oBike is nothing like cycling on a thousand dollar, carbon-fibre sports bicycle, but it gets the job of getting around Singapore done. You’ll save much more on transport – those few dollars make a difference in the long run, and you also get to break away from a sedentary lifestyle to lead a healthier one.

Bike sharing is a new phenomenon globally and admittedly as a society we’re still working out its kinks. Park connectors, for example, aren’t fully complete yet, and there are people who raise an eyebrow at the mention of a sharing economy. But with the Singapore government looking to eventually transition into a car-lite society within 10-15 years, being an early adopter might just be the smart move to make.

Many of us are resistant to change, but as Uber and Grab have shown over the past 4 years since they first entered the market, if there’s a better way of doing things, Singaporeans are practical enough to adopt it. And it helps that being practical here saves a ton of money in the long run.

Find out more about oBike here!

New And Fun Things To Do In August 2017: Really Really Free Market, Foodiegram Sundays, And Coffee Festival
5 Things To Do At Singapore's First 3-Day Open-Water Event At ECP