Think you know your Melbourne coffee?

Melbourne has been touted as having the best coffee in the world, beating even Rome & Vienna. The culture of coffee is so embedded within the city’s culture that small alleyway coffee joints thrive well simply because of its superior quality & the public’s passion for coffee.

One of your must-dos in Melbourne  is to drink a cup of Melbourne coffee. And while you’re at it, you might as well drink from the very best cafes there are. Here are 10 of the best coffee joints in Melbourne and what makes them so special. 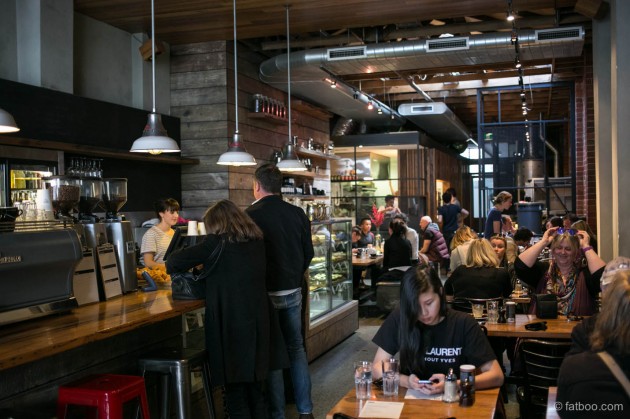 Dukes Coffee offers both floral and fruity flavours in their coffee. The crowd-pleaser blend is the Dukes Espresso Blend, which is specially designed for milk. It consists of a complex, full-bodied flavour profile, with notes of cherry, caramel and milk chocolate. During the summer, an excellent choice would be its range of filtered coffees, such as Colombia El Meridiano (yes, they serve it iced!).

I highly recommend Dukes as a starting point for new coffee drinkers, as their friendly baristas are knowledgable and more than happy to educate curious minds! With a wide range of brewing techniques from the V60 to the Aeropress, you will be in good hands. 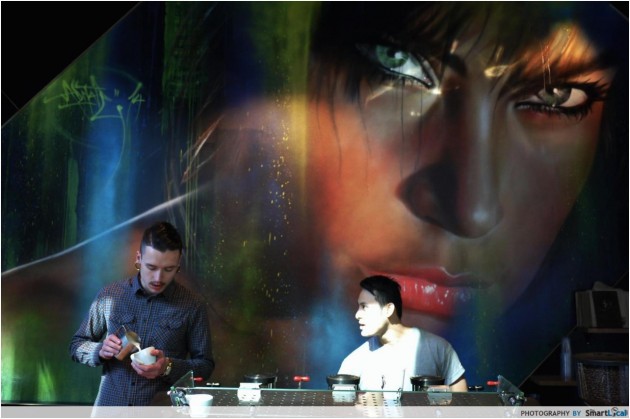 The Axil Espresso Bar in the CBD first catches your eye with a ‘cosmic’ wall art of a woman (ah, those piercing eyes!). But its coffee captures your tastebuds and the hearts of many. Although it only brews the seasonal espresso blend and a handful of single origins unlike its Hawthorn counterpart, there is a frequent rotation of blends, due to seasonal availability and limited quantity.

The current Espresso blend boasts of a thicker and sharper profile. Unlike the current trend which leans towards a lighter, floral palate, the rich and intense flavour of Axil coffee beans stands out from the crowd. If you prefer a strong profile, look out for Axil Coffee beans distributed throughout Melbourne. 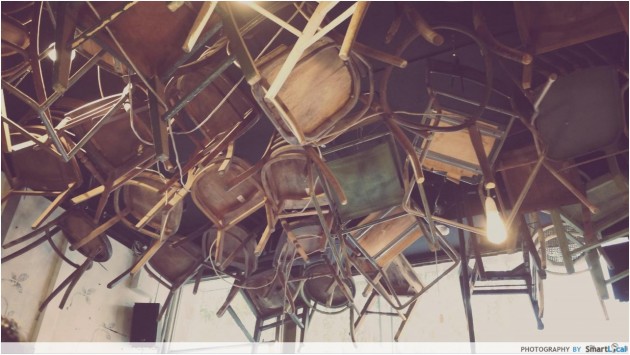 As an outpost of Seven Seeds based in Carlton, it serves 2 contrasting espresso blends and 2 types of filter coffees, which are rotated every 1 to 2 months. I recommend that you try Burundi Mubuga (filter) if you like notes of pineapple, cola and wine. If you’re a soy drinker like myself, try a coffee with lower acidity so that it does not curdle as easily, such as the Golden Gate blend. 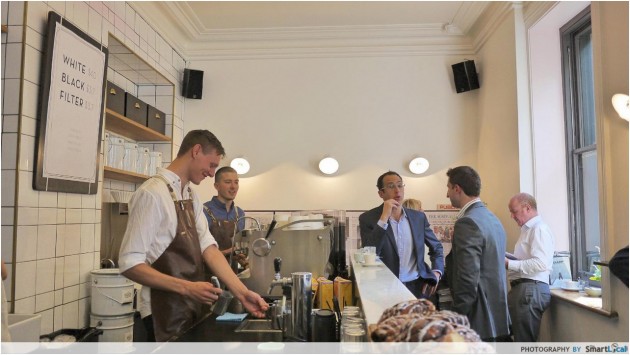 The simple yet elegant interior of Patricia Coffee Brewers is an accurate reflection of what its coffee professes to be. From the soft, luxurious texture of the leather aprons donned by its baristas, to their deft skills of coffee brewing techniques, every detail alludes to the fact that Patricia is its element. It is evident that coffee is brewed with high precision and skill.

The espresso blends are rotated monthly and sourced from various suppliers so that customers get a varied flavour profile. It seems that the secret to Patricia’s success is the consistent well-balanced profile that has exquisite mouthfeel – and accomplishing that in a timeless style.

5. The League of Honest Coffee 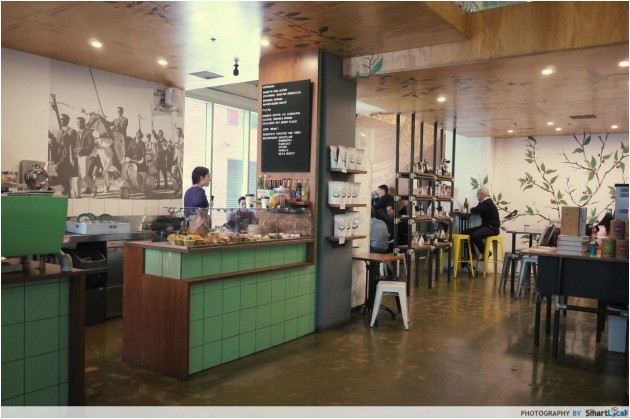 The League of Honest Coffee is an ideal café for an afternoon of reading leisurely or an unhurried conversation amongst friends. Set up in a light & bright space, its laidback attitude extends to its coffee as well. Its season blend – a sweeter, mellow and slightly fruity palate – goes extraordinarily well with St David’s Milk (fresh milk produced in Victoria).

For soy drinkers, rejoice because there’s no extra charge for soy! Its flavour profile as a ‘white’ coffee (with milk) has a milk chocolate undertone, which is a crowd-pleaser because who doesn’t like chocolate? No one. 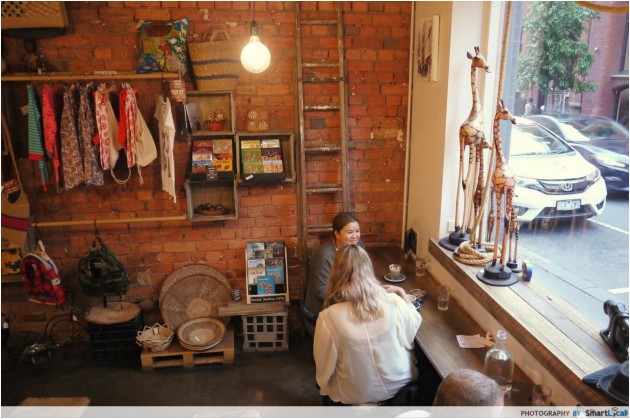 The heart of 2Pocket is its mission to serve exclusively fairtrade-sourced coffee and goods, which include an eclectic mix of clothes, knick-knacks and chocolates. Its most notable blends are its beans from Rwanda, a medium roast with caramel, sour cherry finish, and a Single Origin from Timor Leste with a smoky, buttery and dark flavour.

Second to its flavour in terms of its noteworthiness, would be the backstory of how the Timor Leste Single Origin came to production. It was a crowd-funded, Kickstarter campaign by 2 Melbourne guys (specifically from Coburg). Double thumbs up to decent coffee and even more decent campaigns! 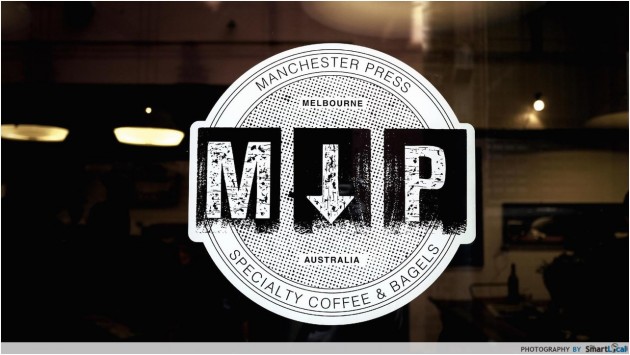 Manchester Press prides themselves on their house blend. That is because it is so widely appreciated by both locals and tourists. It is easy to drink, even for an inexperienced coffee drinker. Its dark roast gives off notes of dark chocolate and caramel, which is arguably a simple, straightforward flavour profile with a sweet, nutty finish.

The bagels served are definitely considered one of the better ones in town, but it is the coffee that is the star of the show. Its rustic interior with artfully mismatched chairs and tables provides a genial vibe for coffee and brunch dates. 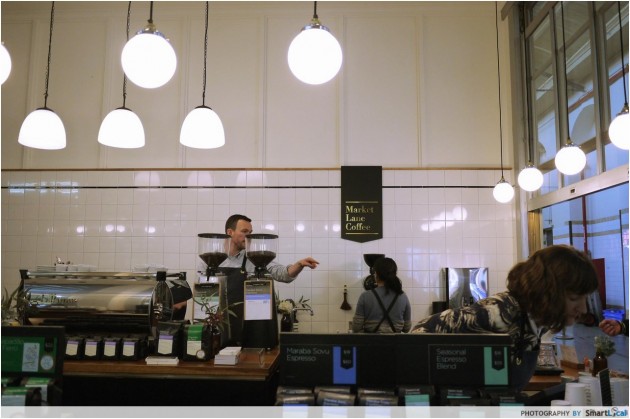 Market Lane Coffee’s seasonal blends have one of the most consistently superior qualities in terms of its beans, which are also available for mass consumers. They have built a direct relationship with coffee bean farmers from South America and Rwanda, in order to produce a sweet and balanced flavour profile perennially.

Its current seasonal blend has a creamy mouthfeel with hazelnut, sugarcane and blackcurrant, whereas its filtered coffees are lighter and more delicate. Its overall product range is balanced with nutty notes, which is excellent for milk blends. However, the high acidity of their coffee beans is not suitable for soy (hence no soy is available as an alternative). 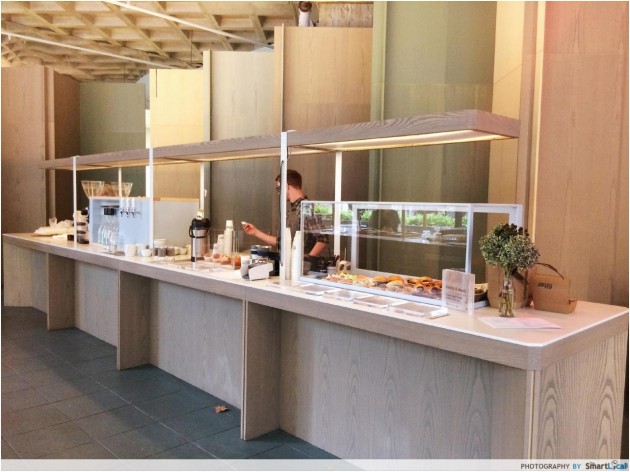 Filter is backed by Small Batch Roasters, as an outpost in the CBD. What’s unique about Filter is that it brews coffee differently from its award-winning North Melbourne counterpart, Auction Rooms.

Filter uses the Aeropress technique which yields a significantly different flavour profile from those available at Auction Rooms. Its Jorge Rojas, Colombia blend, made with the Aeropress, produces a dried apricot with caramel notes. Filter uses washed coffee, in which its pulp is fermented. Its coffee blends are rotated weekly. 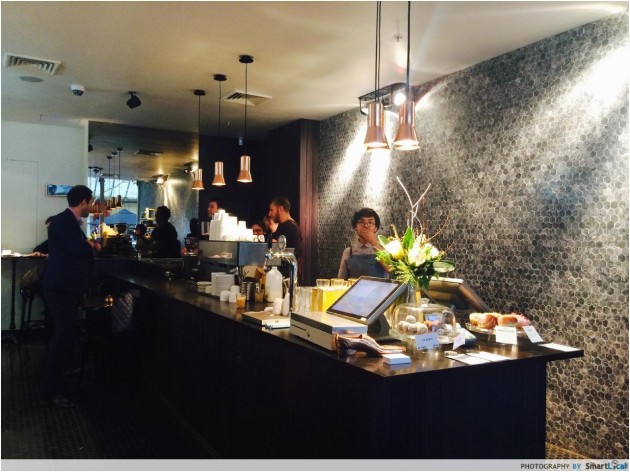 Nestled in the hustle and bustle of corporate office buildings, Bonnie carries Fitzroy-based Industry Beans. For a small coffee joint, it is certainly impressive for their wide range of espresso and filter blends that is regularly rotated every 10 weeks.

Its chic and dark interior suggests that it is dead serious about coffee, so much so that they have dedicated to the production of a year-round blend which consists of 5 types of coffee beans, mainly from Central & South America. It is a darker roast, compared to its Industry Beans range. Perfect with soy and almond milk! Doing coffee while being sexy – I approve.

Get your Melbourne caffeine fix today

I once heard a joke from a barista: “When [the] Italian migrants went to Canada and other parts of Europe, they forgot their Espresso machines! Thank God for the Italians who came to Australia, they remembered it!”

Sounds like a rather cheeky line; but I felt that the sense of pride embedded was representative of the coffee culture in Melbourne, and that maybe, it could be one of the most likely reasons why the coffee here is outstanding!