Indulge in the Flavours of Spain. 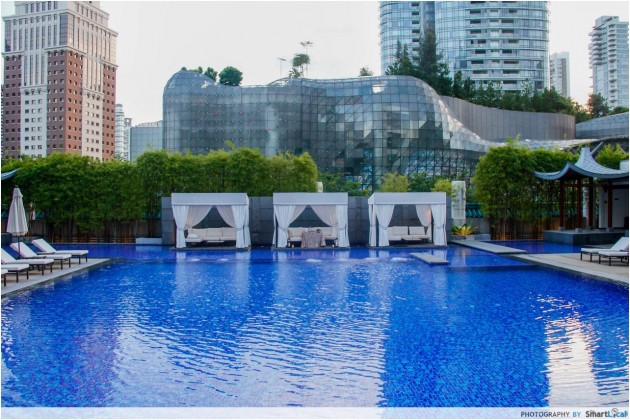 Level 5 of the grand Marriott Tang Plaza Hotel holds a spectacular secret: a restaurant by the name of Pool Grill, which serves amazing food alongside a stunning view. Stepping out of the lift, one will be greeted by a pool tiled blue, hues chosen specially for their calming and relaxing properties.

Emanating resort vibes and peaceful serenity, the place is definitely not what you would expect from a restaurant nestled within the heart of bustling Orchard Road.

From 15 February to 13 March, Pool Grill has invited Guest Chef Albert Ortiz, who hails from Barcelona, to please palates with tantalising Spanish fare from its Flavours of Spain menu. Having spent three years in Asia, much of Chef Albert’s food are traditional Spanish dishes infused with Asian influences. 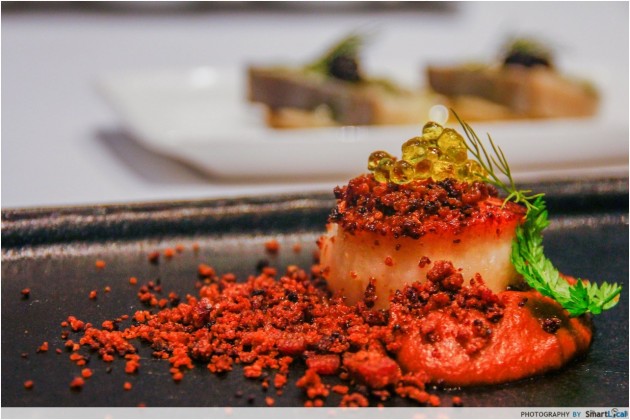 Sprinkled with crunchy chorizo (pronounced chor-eetho) migas bits which added a crunch, the delightfully fresh and juicy scallop provided an explosion of flavours and textures in my mouth.

The sofrito purée – typically consisting of garlic, onion, paprika, peppers, and tomatoes stewed in olive oil – was smooth; exhibiting a bitter fragrance that enhanced the sweetness of the scallop. 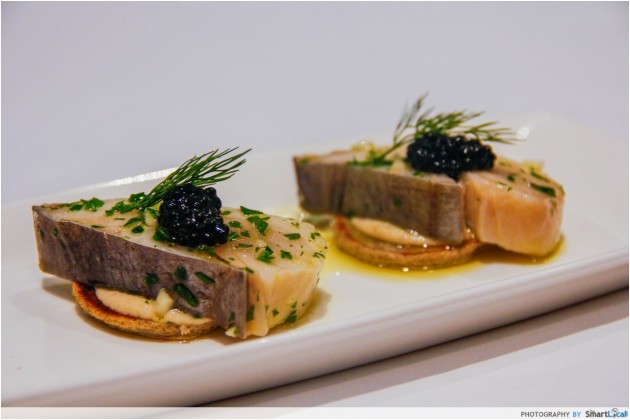 The plump pieces of cured mackerel had a good bite to it, and its tartness complemented the savory crepe well. However, its sourness may be overwhelming for people who do not appreciate acidic notes.

While the taste of eggplant in the mayo was not obvious, I felt that the innocuous creamy dollop pulled the entire dish together as it tied in the wheat-flavour of the little pancake to the biting fish. 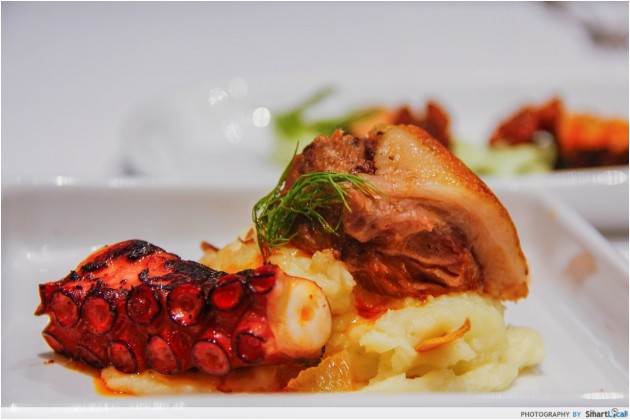 Oh my goodness, I’m not even sure how to describe this dish in its full glory. Amazingly tender and succulent pork, rich buttery mash, and a generous juicy chunk of octopus; this dish hit all the right notes at once. Octopus has a tendency of being rubbery if not cooked well, but this particular variation was beautiful and devoid of excess chewiness. With every bite, the grilled aroma permeates and the octopus flavour intensifies.

The pork jowl was easily sliced through, with a sinful layer of melt-in-your-mouth fat that created the golden meat-to-fat ratio. Surprisingly, the combination of pork and octopus made for a delectable dish. My only grouse was that the skin of the pork was not crunchy. Thankfully, its overall deliciousness made that easy to overlook. 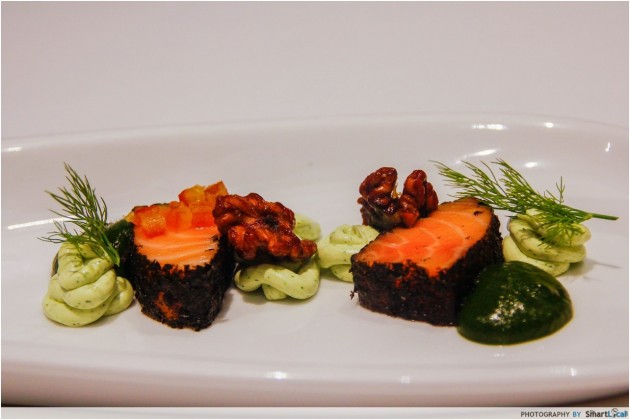 Though smoked salmon is a European dish, this version was made with Japanese dashi,perhaps inspired by Chef Albert’s years in Asia. It strangely reminded me of sashimi. I’m not complaining though, sashimi is to-die-for.

The daring combination of black tea cream and goat cheese went well, but with the salmon it just didn’t seem to gel as the aftertaste of tangy cheese overpowered the salmon. When I had the salmon together with the whipped cheese and black tea cream, I found the overall taste very confusing. 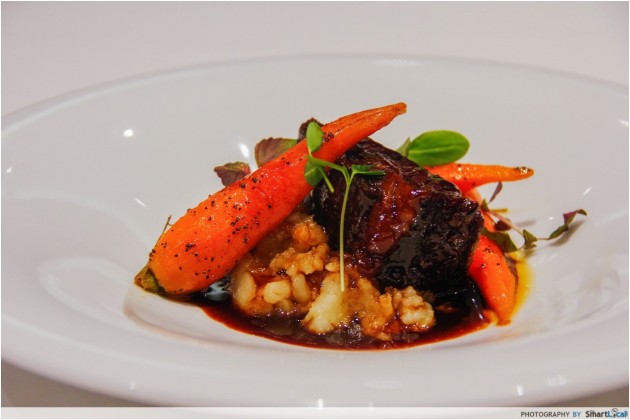 The braised beef cheek which was just the right cut had satisfying streaks of fat without being too fatty, at the same time providing adequate moistness. In fact, the beef looked drier than it actually was!

Taste-wise, the dish was above average but was frankly unexceptional. 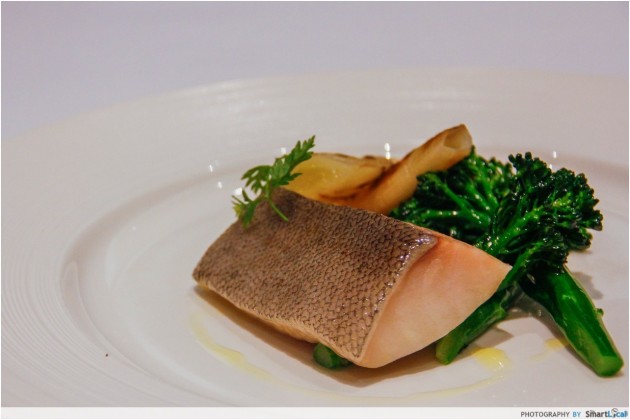 The black cod fish was char-grilled to utter perfection as it was soft, rich, and delightfully flaky. Drizzled with a spicy sauce, my first bite of this dish gave me a mild shock. The mousseline was surprisingly fiery for a Western dish! Yet, it complemented the languid milkiness of the fish well.

Do not be deceived by its seemingly small size, the fish was served at just the right portion so that it did not get jelak. 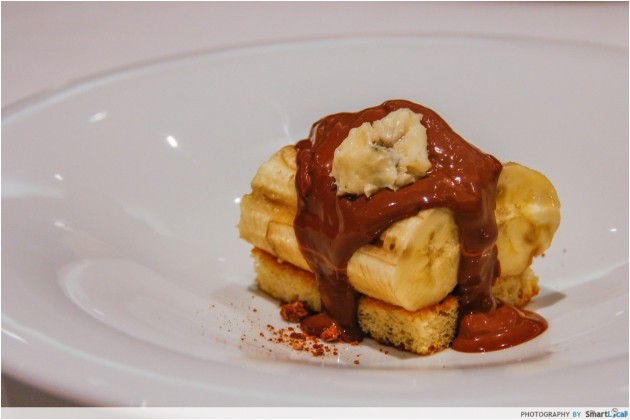 This decadent dessert features dark chocolate ice-cream that melts quickly into a moussey and rich chocolatey sauce that one can lap up along with the caramelized butter bread.

The salty gorgonzola cheese placed on top goes superbly well with the sweetness of the banana and chocolate. Though seemingly counter-intuitive, this savoury and sweet combination blew me away with how the contrasting flavours went so well together. Furthermore, despite being drenched in chocolate ice cream, the butter bread surprisingly retains its crunch.

With the foolproof chocolate and banana pairing, this beauty was the best way to end a terrific meal. 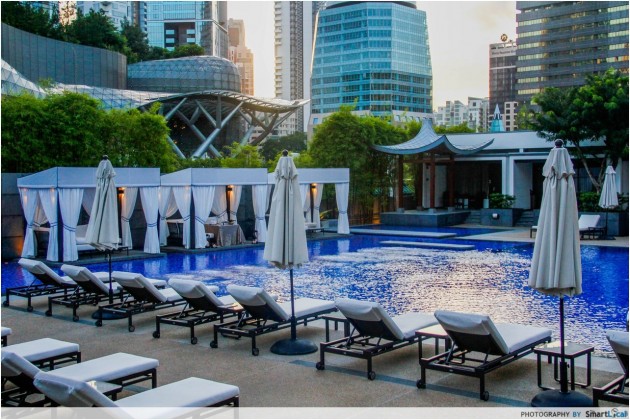 By the end of the meal, a satisfied smile had creeped its way onto my face and settled snugly onto my cheeks.

If, like me, you haven’t been inducted into the wondrous world of Spanish cuisine prior to this, Pool Grill, with its top-class food and spectacular view in an idyllic setting, is the perfect place to treat yourself to a Spanish extravaganza sure to make you fall in love with it. As this special menu is available only for a month, be sure to head down to Marriott Tang Plaza Hotel to sample Chef Albert’s creations before 13 March!

This post was brought to you by Pool Grill.

11 Over-The-Top, CHEESY Foods To Stuff Your Face And Sink Your Teeth Into
10 Financial Tips Every 20-Something In Their First Job Should Know