Make the Future Singapore: A Festival of Ideas and Innovation

While a handful of people refuse to admit that global warming is a real problem, the rest of us know that a hotter world is not a better world. We have produced more carbon emissions over the last few decades than ever before. It’s easy to say, “Oh I’ll start recycling tomorrow”, but let’s be real, having to figure out what can go into the big blue bin and what can’t is a chore sometimes.

Thankfully, the world’s brightest are already searching for solutions. This March, the stage is set at Make the Future Singapore for you to experience the world’s most innovative creations, as we take a glimpse into our future. And with guest performers such as Pixie Lott and Nathan Hartono, as well as a showcase of the most futuristic cars in the region, learning about our environment doesn’t have to be boring.

Here are 5 reasons Make the Future Singapore is a must-go this March holidays! 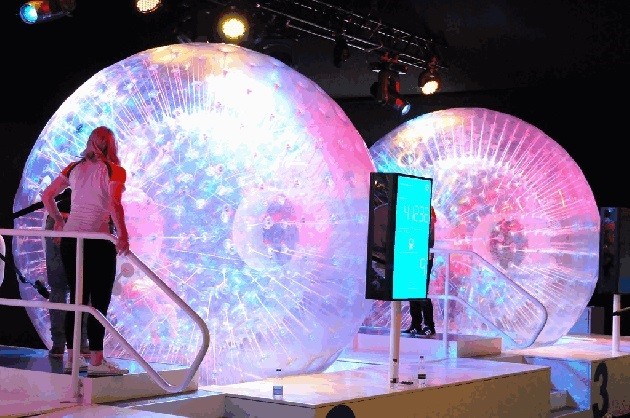 Fulfil your inner desire of running around in a hamster ball at Make the Future Singapore. Three giant Zorb balls will be connected to form a power generator, and visitors are encouraged to run inside to generate as much energy as they can – with a digital screen clocking your score! You can even race against your friends and compete to see which human hamster can generate the most energy.

Maybe in some dystopian, Black Mirror-esque future, most of us will be stuck in one of these, endlessly running our lives away to generate power for the masses. Better get that training done early.

Where: ‘Our Energy Future’ Zone

With Nathan Hartono and Pixie Lott headlining performances, there’s no shame in admitting you’re there just for the concert.

Other Singaporean talents including Take Two and Disco Hue will also be giving performances over at Changi Exhibition Centre, so don’t miss out on seeing all of these acts in one place.

3. Interactive exhibits that can change the way you think about energy

There will be a slew of interactive exhibits at Make the Future Singapore, showcasing the very best innovations of our time. Littered around various zones, you can expect to see everything – from used coffee grounds to gravity – being put to good use as sources of energy.

Football fans like me will be stuck for hours at the Pavegen football station, where we can experience firsthand how footsteps can be converted into energy. Charge up a timer by running on a Pavegen tile, then take shots at a target scoring as many points as possible before the time ends.

This technology is being installed at various high footfall locations worldwide, so the next time you reluctantly go shopping with your mum or bae, you can tell yourself you’re at least helping to light up the world – literally.

Create and bring home your very own saltwater-powered car Source

Relive your childhood memories of Tamiya cars and crush gears by assembling your very own saltwater-powered mini cars. When your fuel is made of 96% of all water on Earth, you can bet the toy car won’t be the last you see of this concept here in Singapore.

Also on show will be virtual reality experiences and the chance to see one of the world’s most energy-efficient cars, as you take a glimpse into the future of transportation.

Where: ‘On The Move’ Zone

4. Shell Eco-marathon Asia – Watch eco cars of the future compete against each other

2017 might very well be the last iteration of Singapore’s annual F1 race, but the new bad boys of automation will be rolling into town this March.

Ok, maybe not bad. I mean these guys might just save the Earth. Source

Over 1,000 students from more than 15 countries are flying to Singapore for Shell Eco-marathon Asia, where they battle it out to design, build and drive ultra-energy-efficient vehicles.

What started some 75 years ago as a friendly bet to find out how far a vehicle could travel on a single litre of fuel has developed into an international competition. The current record set at last year’s event is an impressive 3,771 kilometres on a single litre – further than the distance between Singapore and Taiwan (3,094km).

The stage is also set for the Drivers’ World Championship Asia, a head-to-head race where drivers compete to be the fastest energy-efficient driver and for a chance to represent their countries at the Grand Final in London come May. This competition will boast the same adrenaline and action of F1, except this time it won’t just be a blur for your eyes and a blare in your ears.

It ain’t a festival without good food. Whether you have a sweet tooth or a craving for anything salted egg, the food trucks at Make the Future Singapore will have you covered. From churros to chilli crab, the chow itself may even warrant a trip there.

A Western food truck will also be there to satisfy your tummy with bangers and mash, Cajun fries and a lot of other sinful delights, all 100% halal-certified! Some vendors contributing to this feast for your senses include Kombi Rocks, The Quarters, The Lab and Churros Factory.

Experience, test, contribute and explore the journey towards a low carbon future

No matter if you’re there for the food, music, or because you have a genuine interest in educating yourself, Make the Future Singapore promises you a whole lot of fun.

Students have already shown how they can recreate HIV and Malaria drugs in a school lab that Pharmaceuticals have long been overcharging for, so there’s every reason to believe you may meet the next Elon Musk at the event.

If you’re any bit interested in the future and sustainability of our world, don’t miss out on Shell’s Make the Future Singapore this March.

Register here for free to get faster access and receive a customised Maker Pass – allowing you to collect personalised photos, replay your day, and show your support for bright energy ideas. #makethefuture

Find out more about Make the Future Singapore here!

This post was brought to you by Shell Singapore.