Having worked in Bright Vision Hospital for 10 Years, one of the nurses responded with an inspiring answer to the question “What keeps you motivated, in a job like this?”. The answer she gave was so heart-warming that it was engraved into my mind. The nurse smiled as she replied, “The smile on the patients’ faces are our motivation; they keep us coming back to work everyday.“

Although the turnout seemed disappointing at first glance, the place actually got more crowded as the night went on, perhaps a good sign of Singaporeans’ charitable nature and willingness to help and support an event like this.

The highlights of the concert

The concert started off with a bang – with two drummers setting the stage for an exciting night with their drum repetoire. Although there weren’t any background music, the way they kept in beat were impressive and it made my heart thump to the enticing rhythm of the drums. Taking the stage next was a four-girl band, Karlos, which tried to maintain the beat with a loud and jumpy song. 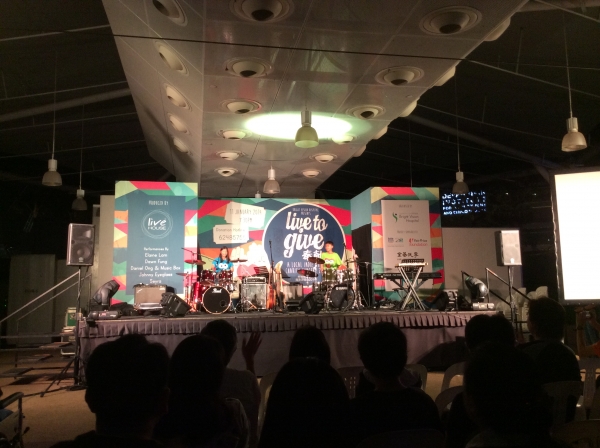 Photo: The two Drummers starting off the concert

The highlight of my night, however, seemed to be the featured local bands of the concert – all of them left me with an impression of warmth and beauty in their voices. There was something unique and special about all of them which touched my heart that night while I was sitting amongst the audience.

Elaine Lam, dressed in a light blue shirt, foreshadowed the vibrancy of her performance with her keyboardist. Elaine Lam had a warm, vibrant voice that seemed to project throughout the area and into my heart – it was welcoming and sweet, almost as if she had planned to playfully brighten up my emotions and bring her joy into my heart. The song ‘坏脾气’ (meaning bad tempered in English), with its unique and vivacious jazz vibe, was especially uplifting when she mentioned that she had created the song with the intention to encourage people to smile more often and not sink into negative emotions.

Closing off, she asked the audience to sing-along to her cover of ‘Close to You’ by The Carpenters and even went off-stage to shake hands with people. She ended her performance with a warm, friendly impression – clearly she had won me over by the warmth of her voice and the warmth of her actions. 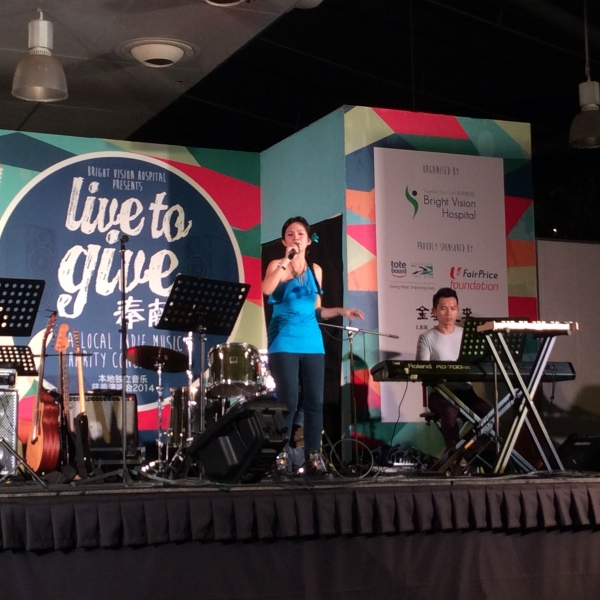 Photo: Elaine Lum singing her heart out to a Jazzy tune with keyboard accompaniment

Next up, Dawn Fung, known as Singapore’s ‘Hougang Mother’, took the hilarious approach and tried to enhance the energy of the crowd with her bubbly personality, her charismatic smile, and a few jokes. Perhaps she wasn’t as jazzy as Elaine, but her phrase “there’s nothing better than family” immediately struck me. There was something humane about it – it made me wonder about the purpose of the entire event.

If we, being a part of the society, being a part of mankind, could treat each other as family, then we could give and contribute so much more. If everyone cared a little more about everyone else’s well-being, there would be so much more to life than just selfish agendas and goals – we would Live to Give. Despite my deep pondering, the night got better, the energy in the place seemed to get higher as the night went on.

Adding on to the youthfulness of the event, Daniel Ong and the Music Box decided to wow the audience with an original song with a nice ring to in – in fact, it makes me want to listen to it again at this very moment. The carefree way that Daniel was playing the guitar kept the beat of the song which was captivating in its own way. You can check out the short video of the song just below. 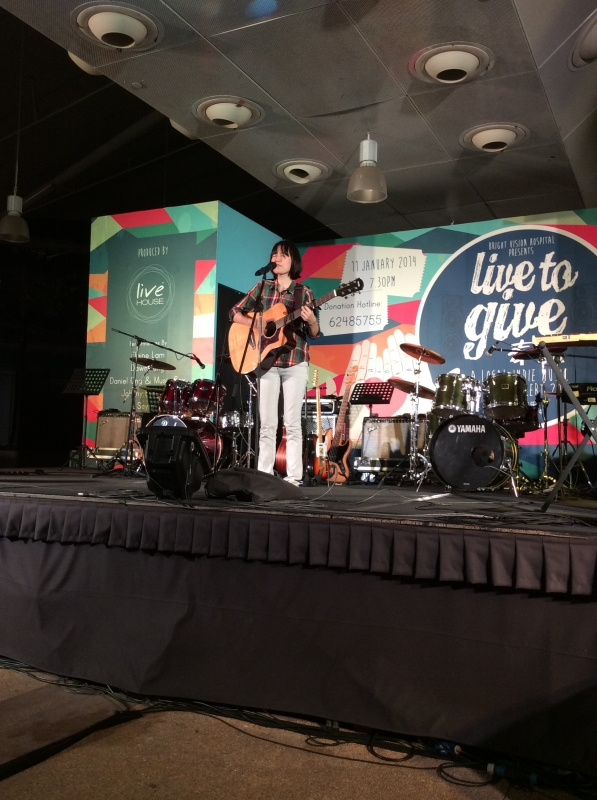 Photo: Dawn Fung and her charismatic smile and personality taking the stage 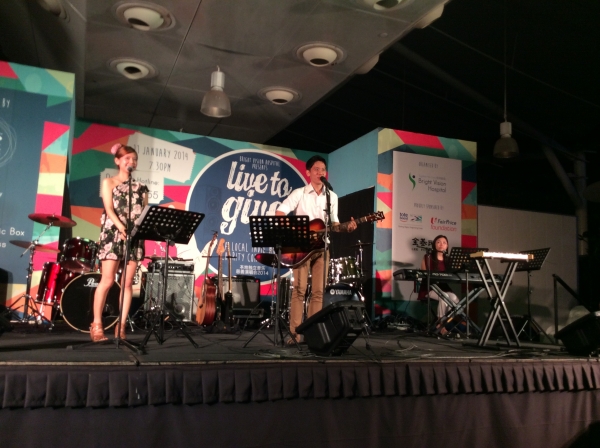 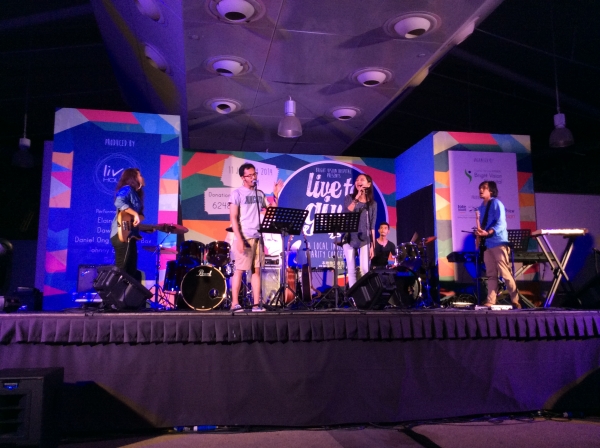 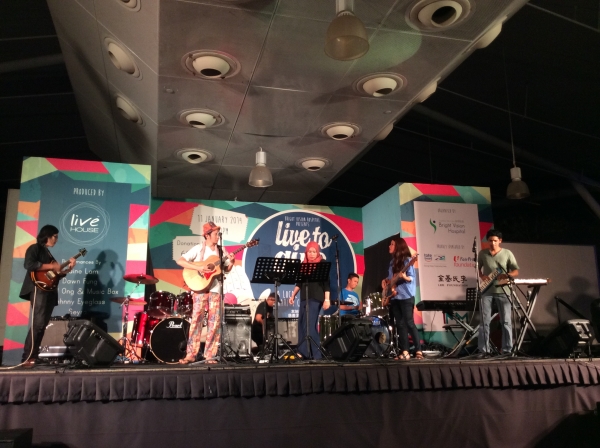 Photo: Seyra ending the concert with their melodic goodness

The concert seemed to keep springing surprises on me. Although I had originally been looking forward for Dawn Fung’s performance, Johnny Eyeglass and Seyra were fantastic – I felt that their music videos didn’t do much justice to their abilities. Both bands were so much better live.

Johnny Eyeglass’s performance was a mix of the mellow vibration of the acoustic guitar, the loud steady drumbeats, the bright strum of the electric guitar, and the deep bass, together with the melodic tune of the song they were singing. While the male vocal broke into a soulful singing of the song, the cymbals accompanied it softly in the background before a crescendo – drums ending off their performance with a bang as the female harmony joined in.

Seyra on the other hand was more intriguing. They made use of different instruments to create the indie-type songs they were singing, even Malcolm (another writer) commented that even though he didn’t understand the language they were singing in, it didn’t bother him much. In fact, I have to agree.

There was something breath-taking about this band that seemed to resonate within me – the echoey effect of the female vocal created a billowy texture which added to the spaciousness of the song. The crisp tone of voice was meshed together with a mesmerising vibrato, which together with the instruments made the perfect indie band. The beauty of the songs was in the fact that the tone and the quality of the apt mix seemed to speak to me, touch me, and even well up emotions deep within me.

TSL community is our initiative to use our reach to highlight important issues to Singaporeans. This program focuses on raising awareness for charity and non-profit events and entities. Contact us and if your story resonates with us we will gladly share it with our readers.