Pulau Ubin’s allure comes in its rustic, slow-paced vibe, where each step we walk is punctuated with the satisfying crunch of dried leaves beneath our feet, and where the coffeeshop uncles and aunties watch Channel 8 reruns from 2010. Not at all what us city folk experience. 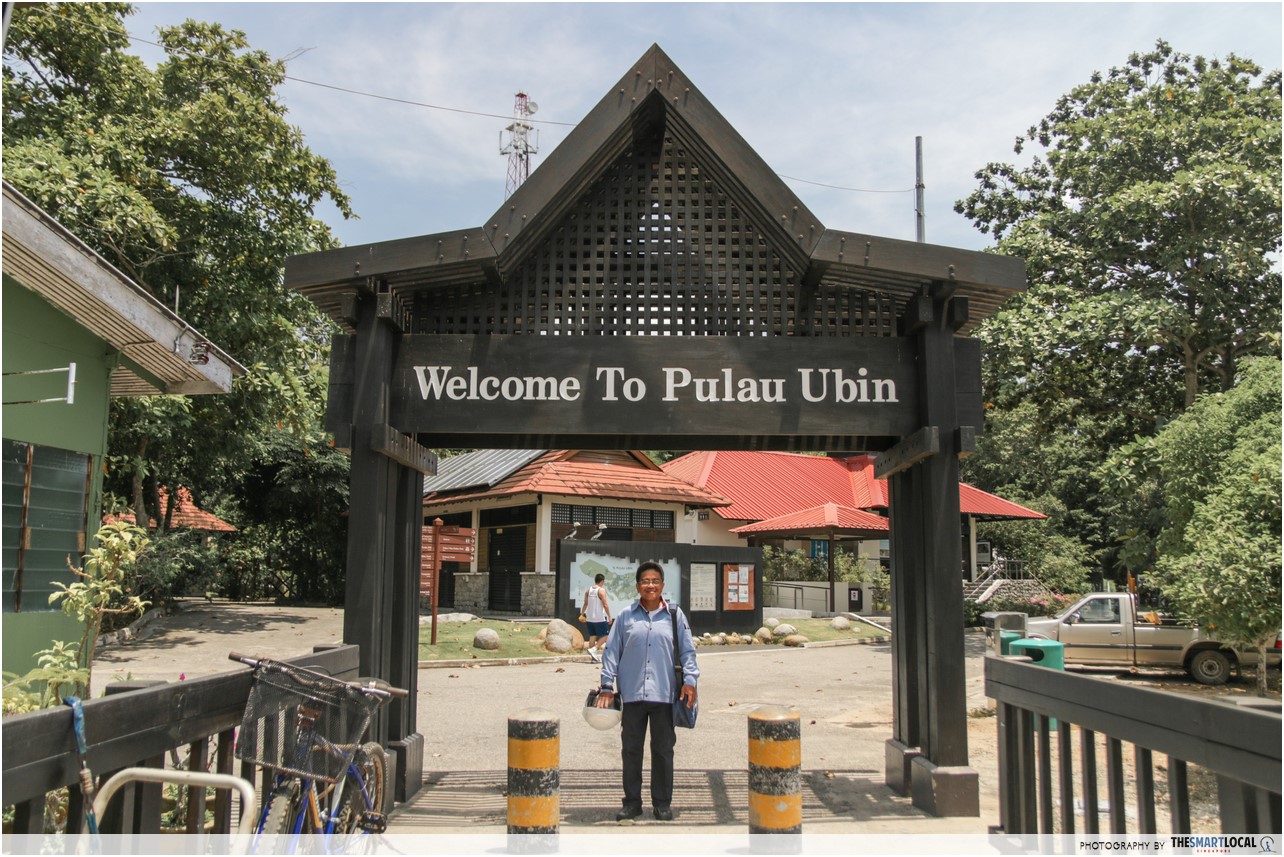 Having postmen to deliver mail is just one of few similarities between the kampong island and mainland Singapore. And with SingPost conducting tests for mail-carrying drones, we followed Mr. Salleh for a day and find out what it’s like to possibly be Pulau Ubin’s last human postman.

A day in the life of Pulau Ubin’s last postman

1. Picking up his day’s mail at Tampines Delivery Base 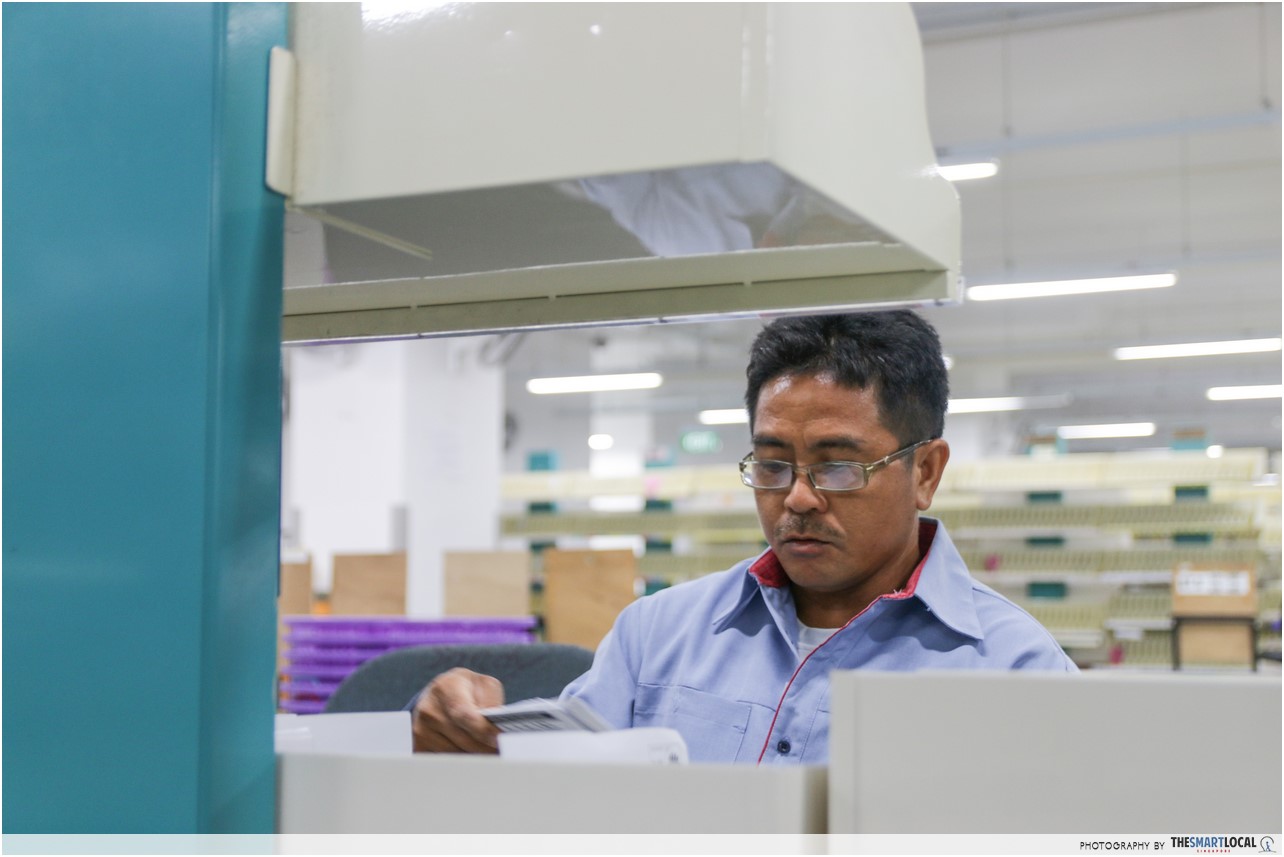 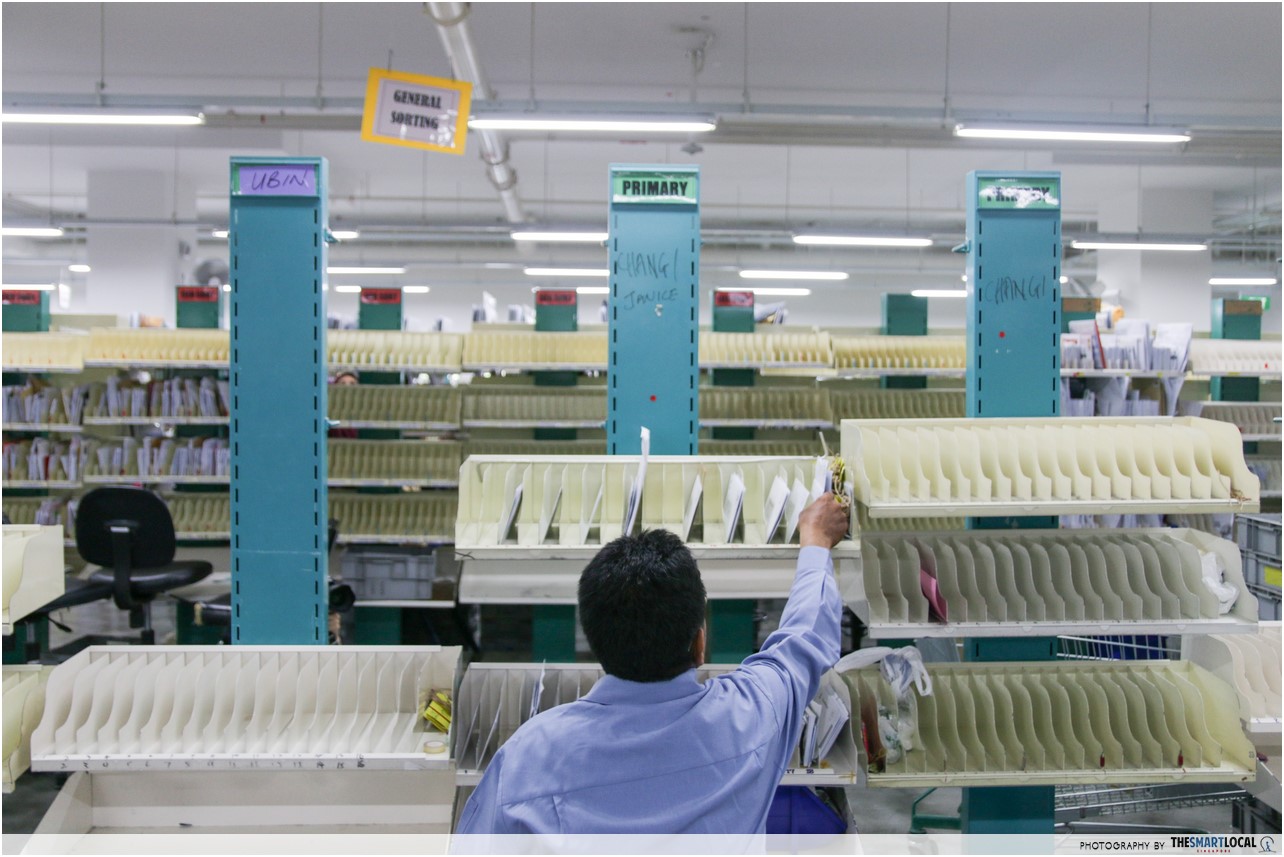 43-year-old Mr. Salleh starts his day off at 11am at Tampines Delivery Base, where he collects and sorts the dwindling number of letters to Ubin. He sorts today’s haul – about 50 letters – much faster than his other colleagues, who go through hundreds of letters to more densely populated neighbourhoods like Changi and Tampines.

When he’s done, he gets on his trusty motorcycle – all SingPost postmen are assigned a motor vehicle – and goes off on his way to Changi Point Ferry Terminal, where he’ll take a bumboat to Pulau Ubin. 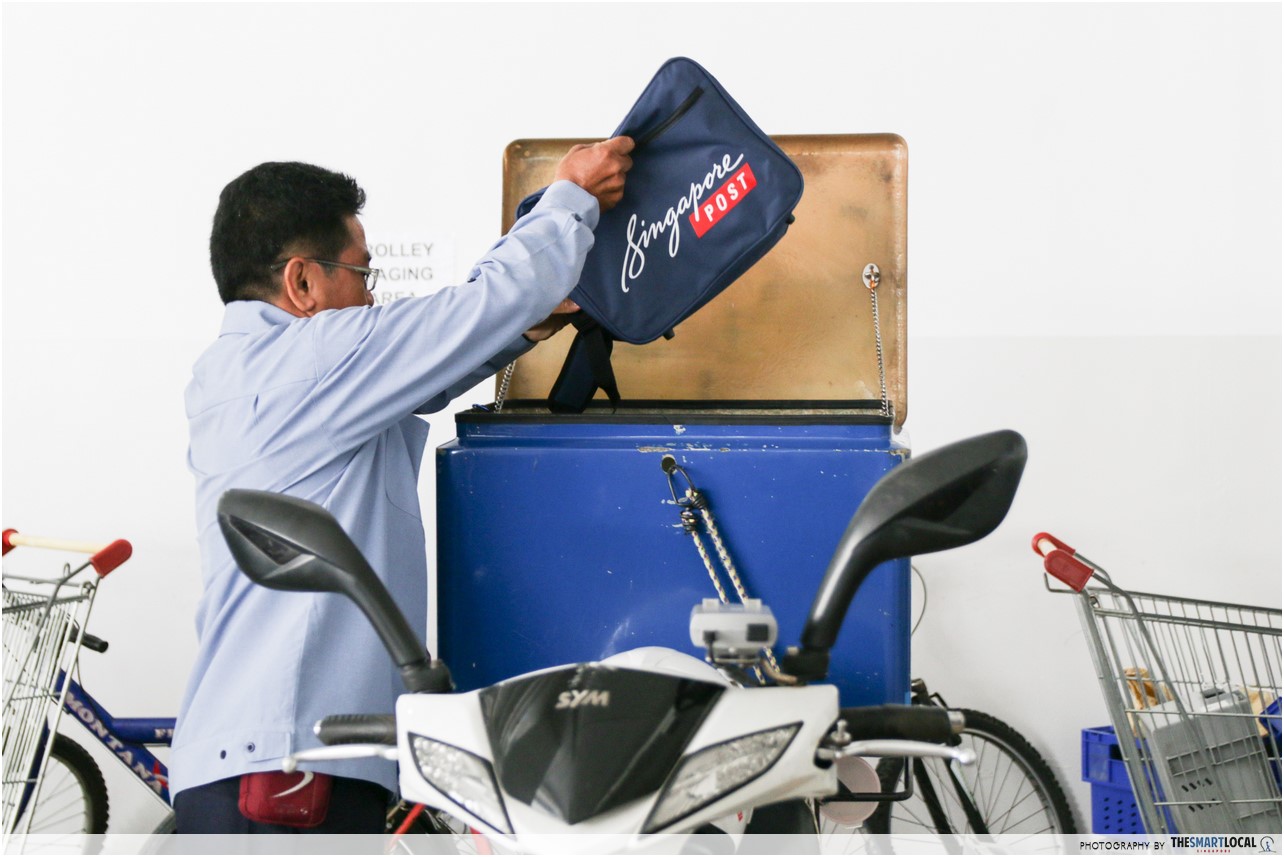 Mr. Salleh readying his motorcycle for his trip to the ferry terminal.

2. Taking the ferry to Ubin at Changi Point Ferry Terminal 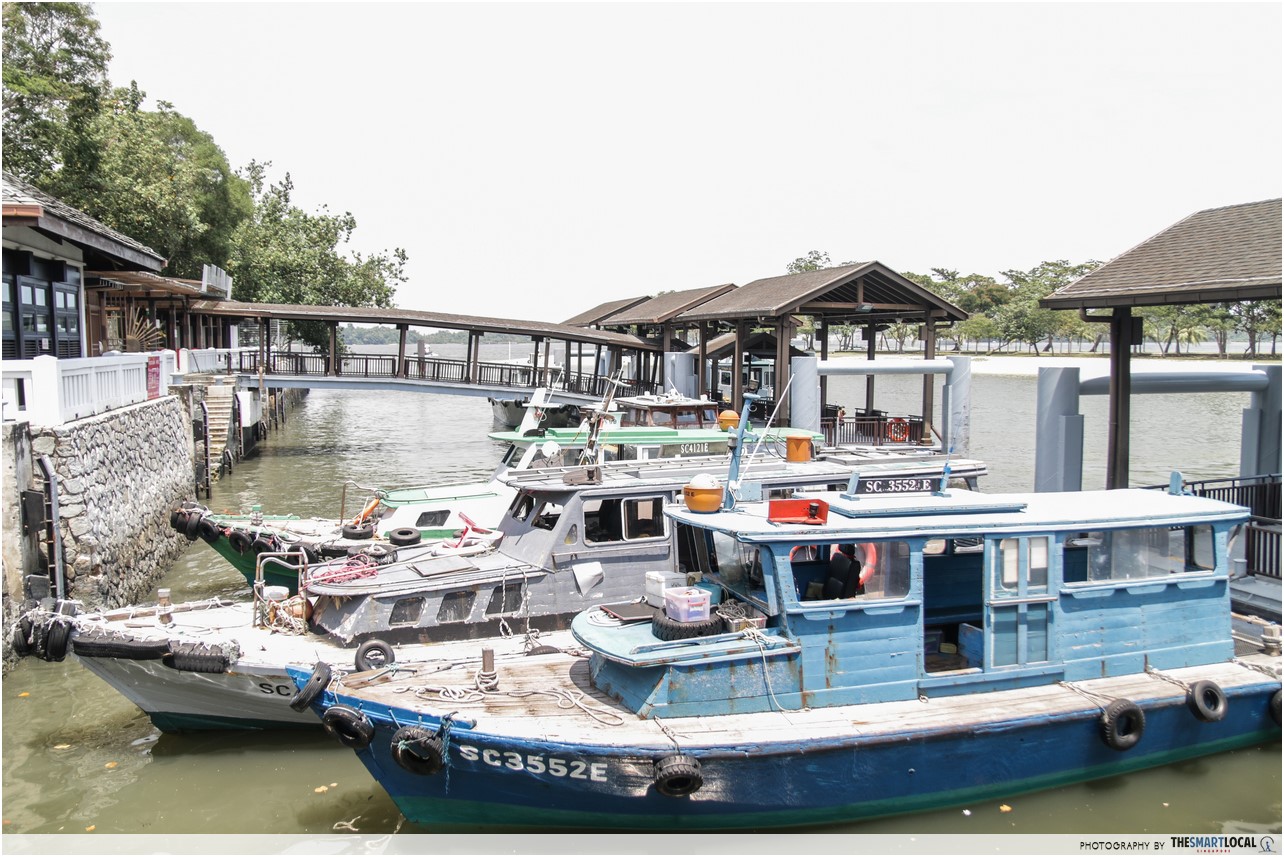 This is where Mr. Salleh’s journey begins – he crosses the sea 3 to 4 times a week, but even Ubin’s everyday hero gets no special treatment. At Changi Point Ferry Terminal, the bumboats only leave the mainland when 11 other passengers come aboard and the wait can take up to 45 minutes.

Like everyone else, Mr. Salleh pays $3 for each one-way boat ride. 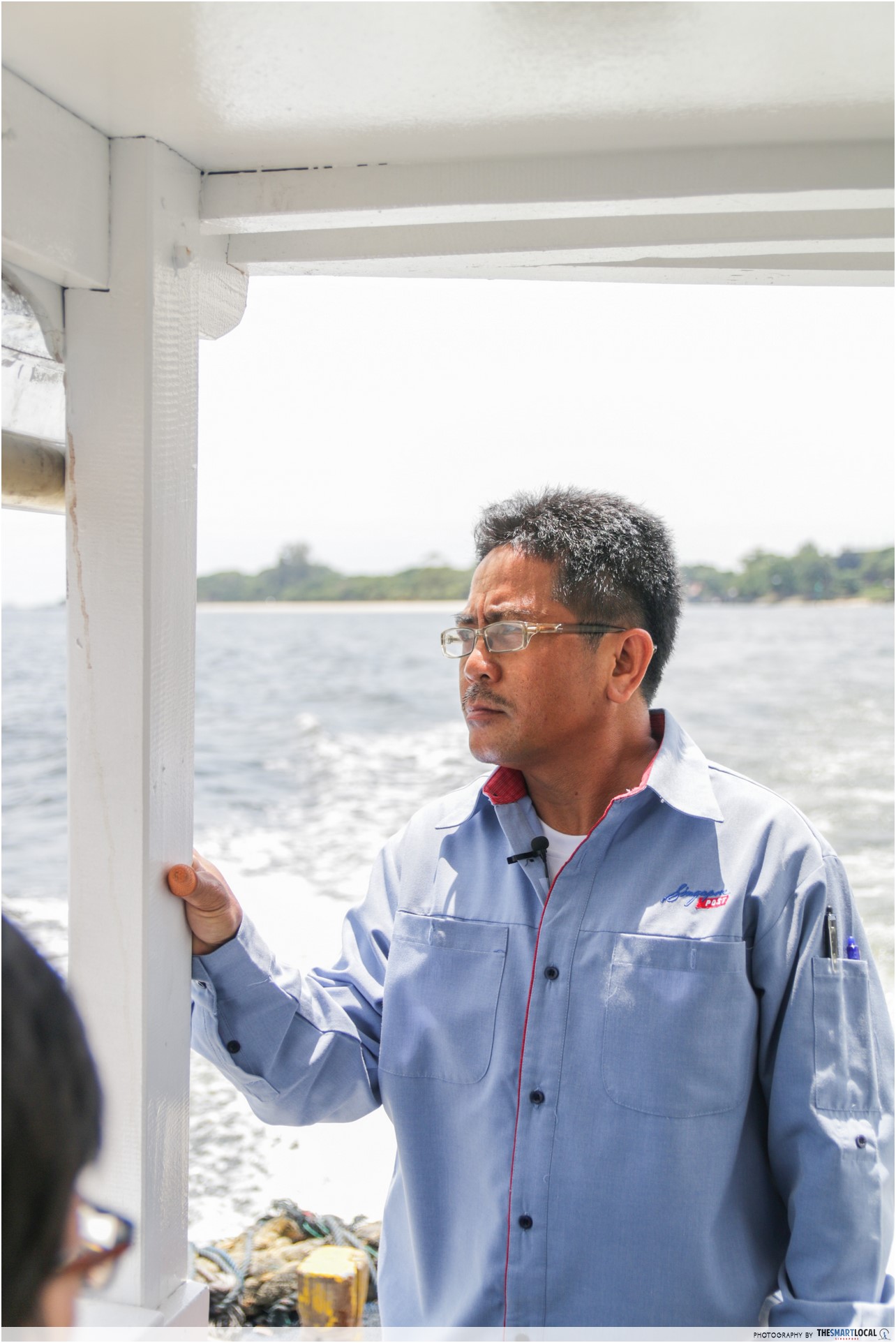 The gruelling wait in the heat and transport costs – it costs more than the MRT! – don’t deter Mr. Salleh. He uses the time for a quick lepak session before the next physically demanding 2-3 hours.

Unlike postmen on the mainland, Mr. Salleh’s arrival at the island doesn’t go unnoticed. Topless taxi uncles nod at him with their legs perched on benches, bicycle shop aunties smile sweetly when he walks by, and coffeeshop uncles wave from their shopfronts when he approaches – he’s almost one of them. 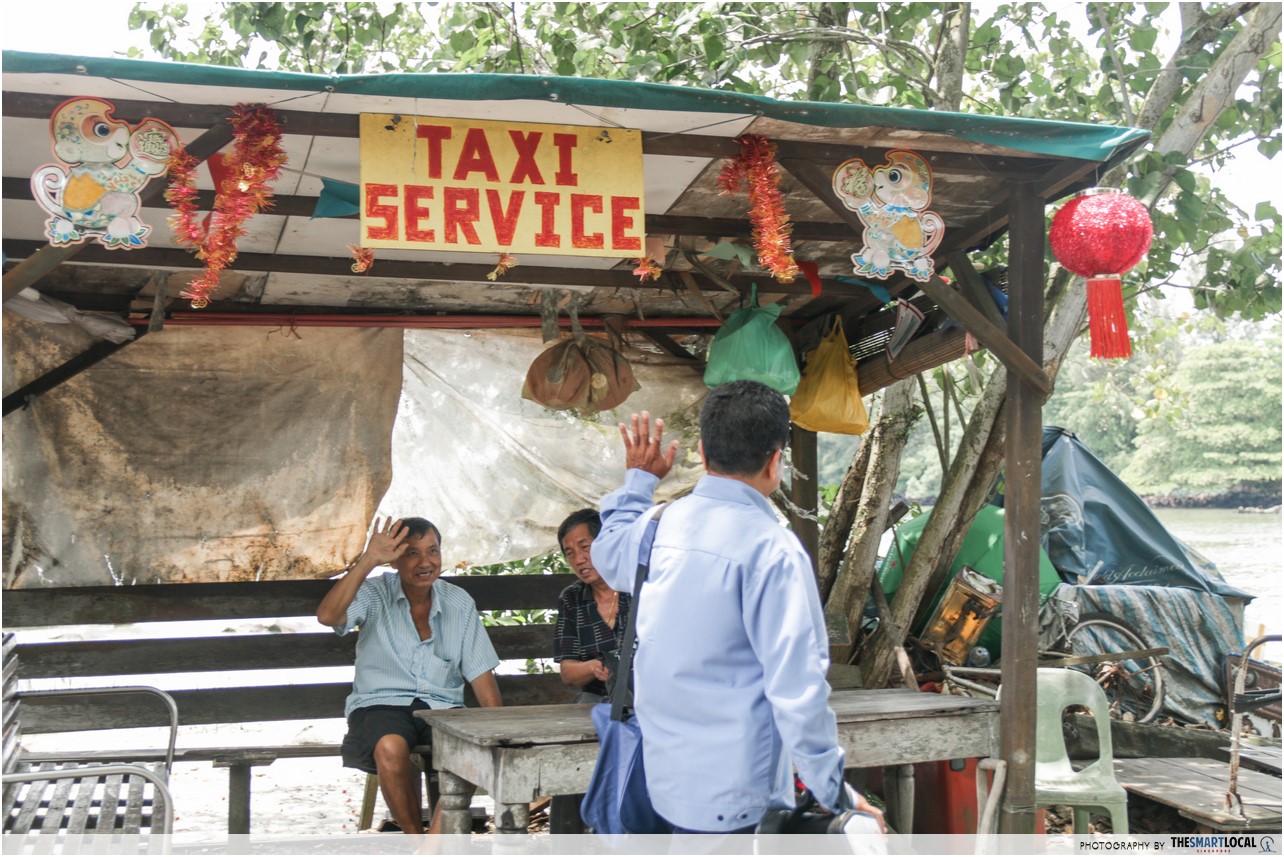 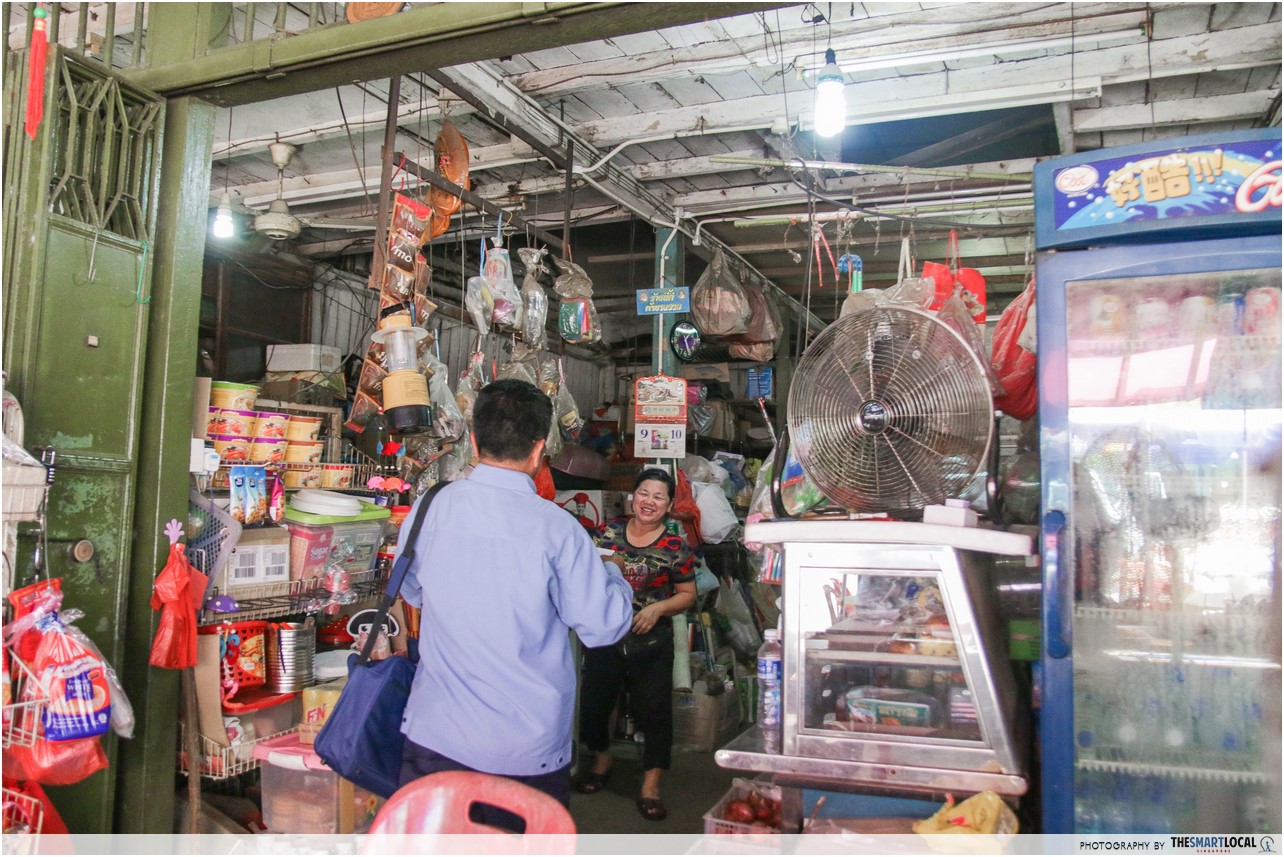 3. Navigating the roads that even Google can’t map 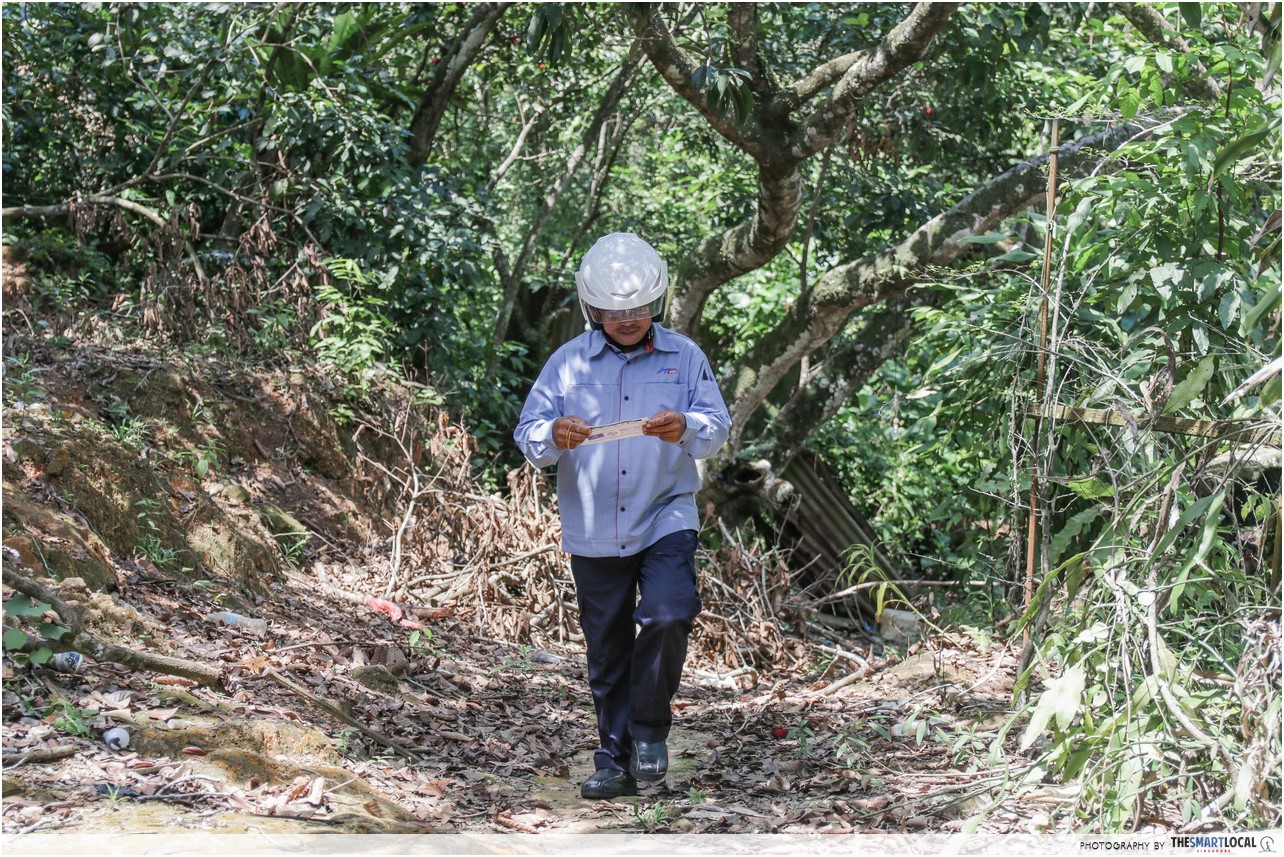 Google Maps has saved my life countless times, but even technology has its limits. The houses on Ubin follow its own rules – the village grew organically, so there aren’t neat address systems like “1 Pulau Ubin Island” being next to “2 Pulau Ubin Island”. The houses are strewn across the island, and only someone familiar with the place can navigate it well.

While delivering the mail is easier with the shophouses located near the jetty, Mr. Salleh needs to trudge his way through Ubin’s vegetation to deliver mail to some of the houses deeper in the island. 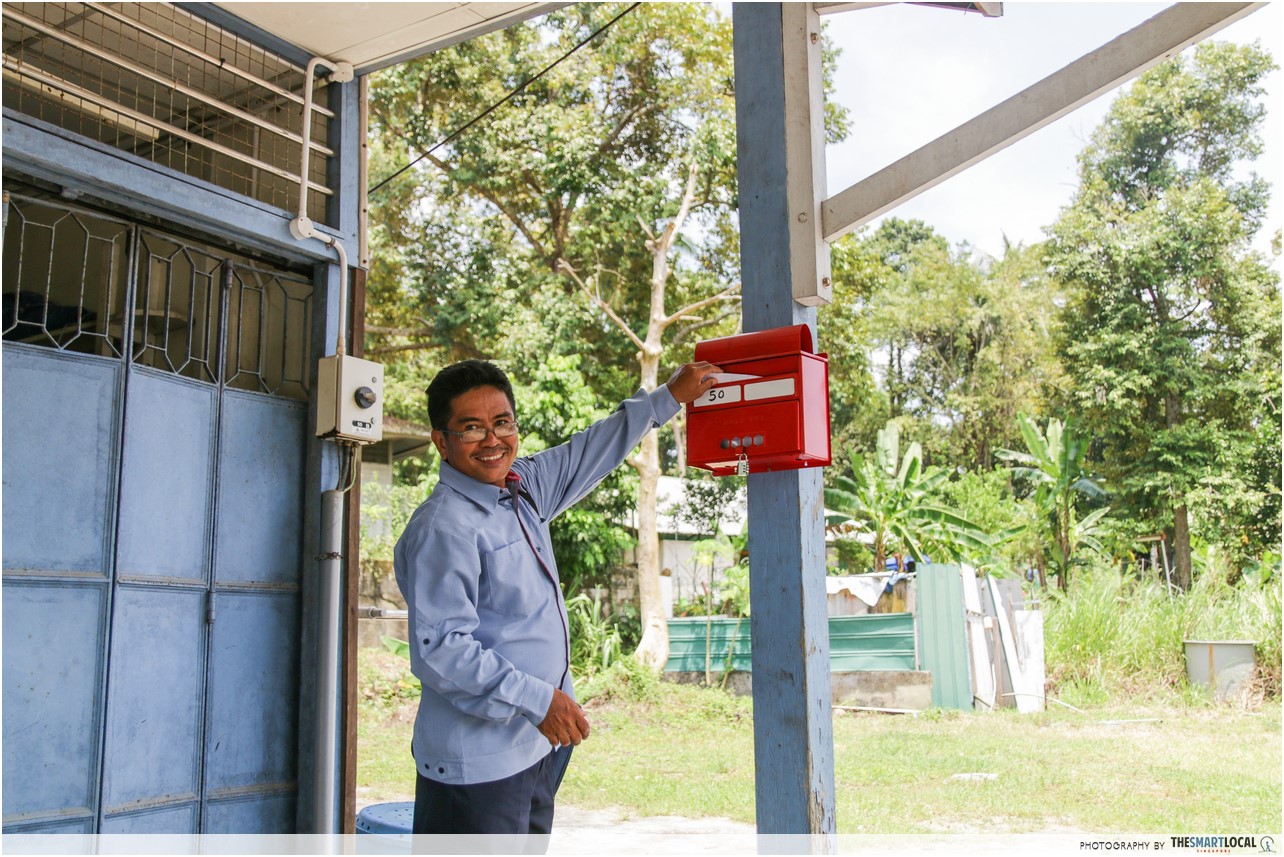 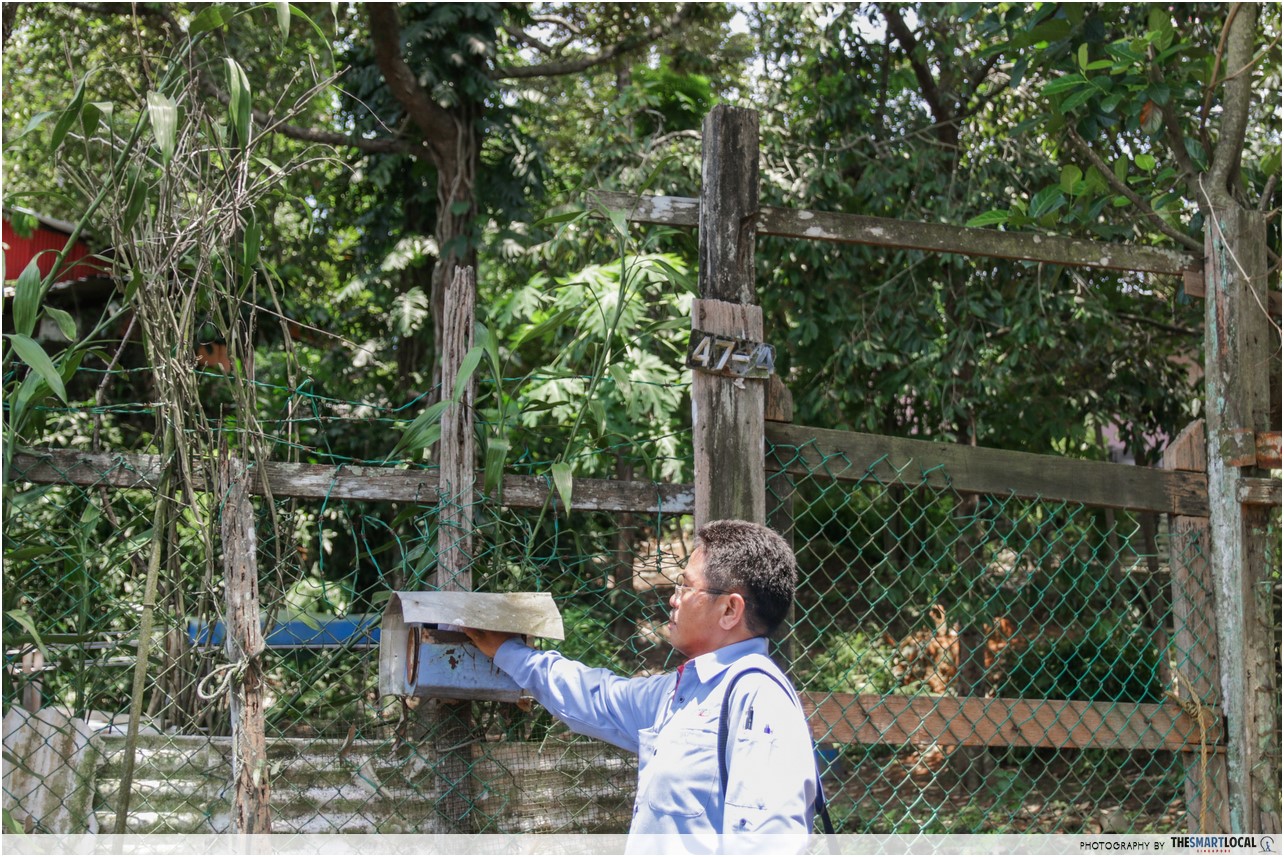 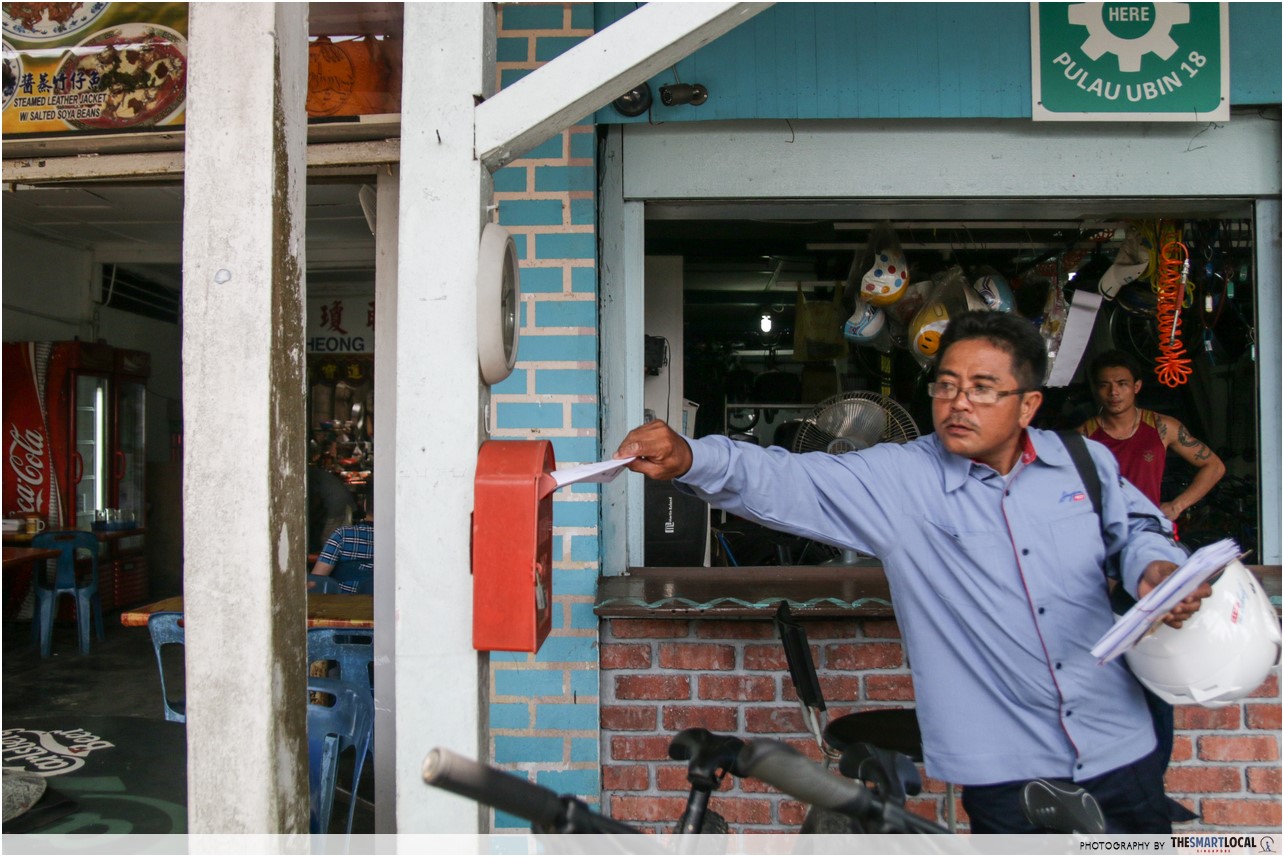 Even though his mail runs are shorter than most other postmen, the two to three hours of work are arduous. While other postmen cruise along smooth roads, Mr. Salleh bumps along up and down beaten roads.

It’s no breezy stroll by the park – “aircon” only comes in the form of the warm, humid wind from riding his bike in the sweltering heat plagued with mosquitoes. 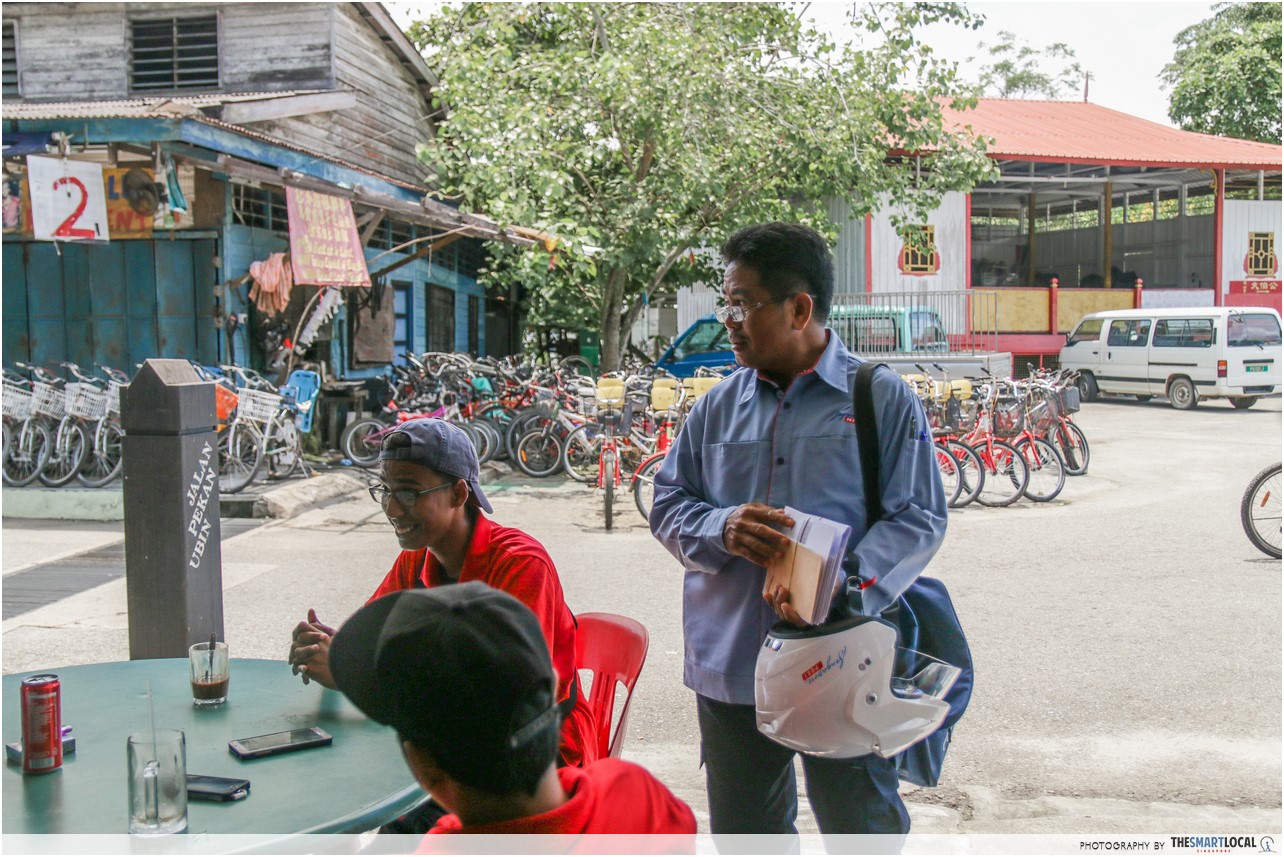 If the residents are in, a quick catch-up session gets underway. Otherwise, he leaves their mail in uniquely Ubin mailboxes:

And here’s the best mailbox on the island: 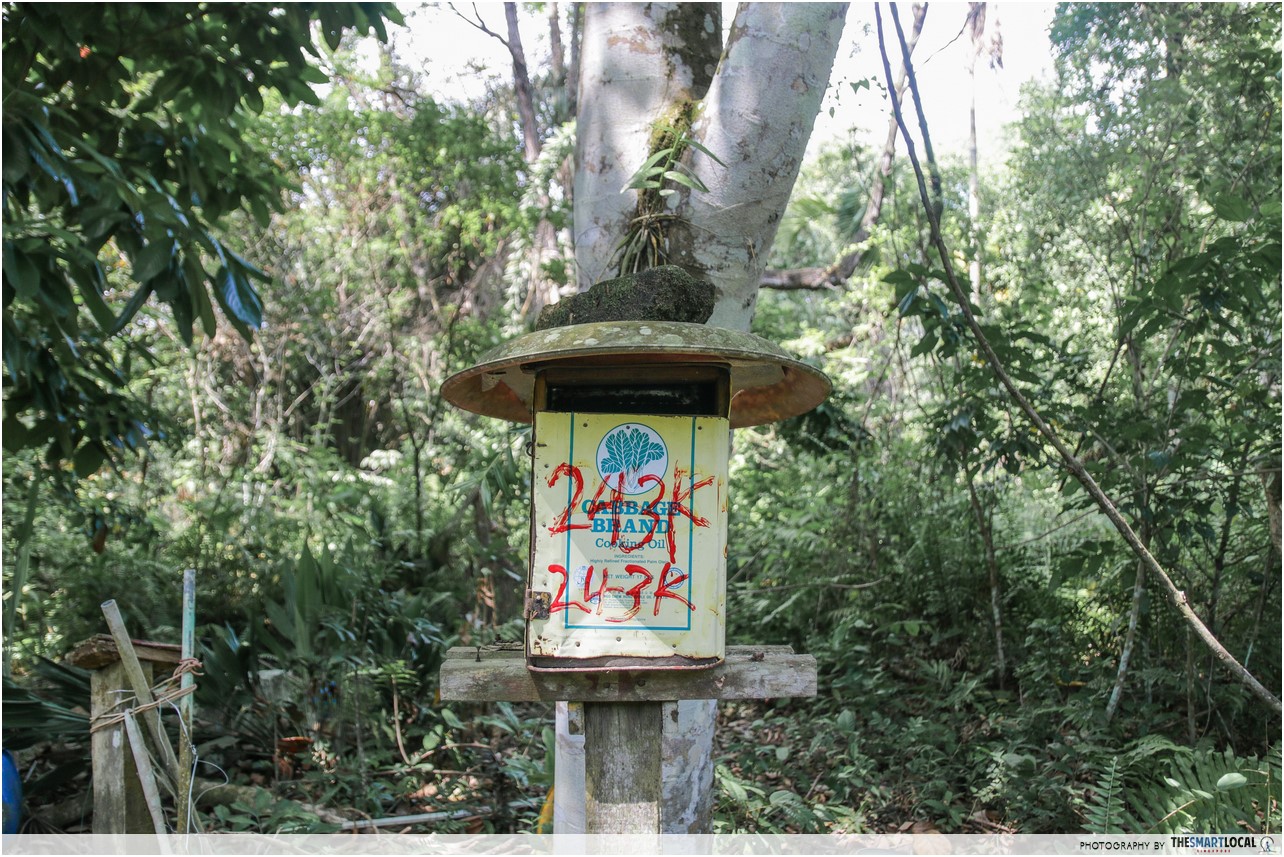 That’s a cooking oil container with a plastic plate as a shield from the elements. #Rabak.

And if the residents don’t have mailboxes, Mr. Salleh leaves their mail in special spots till they come back: 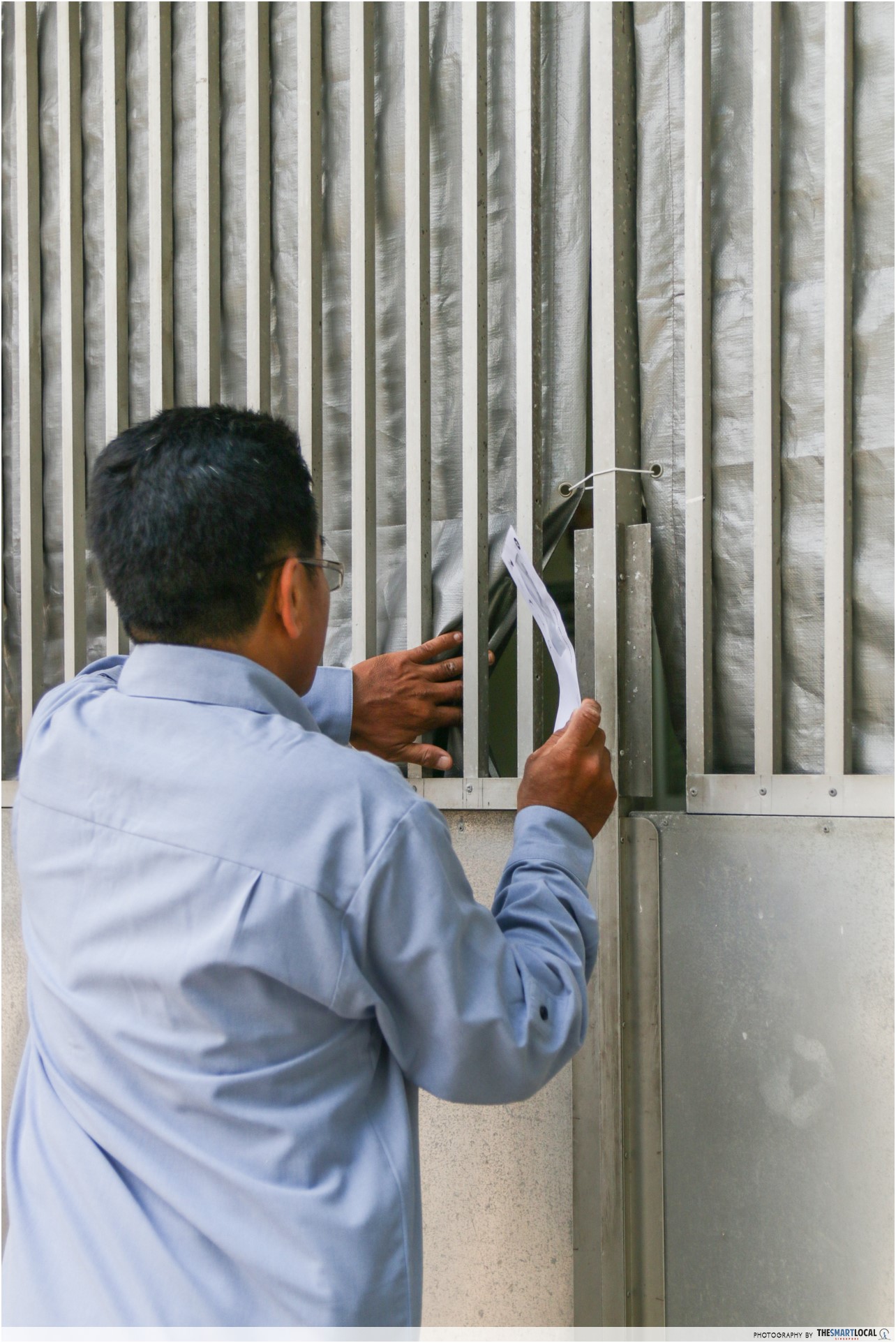 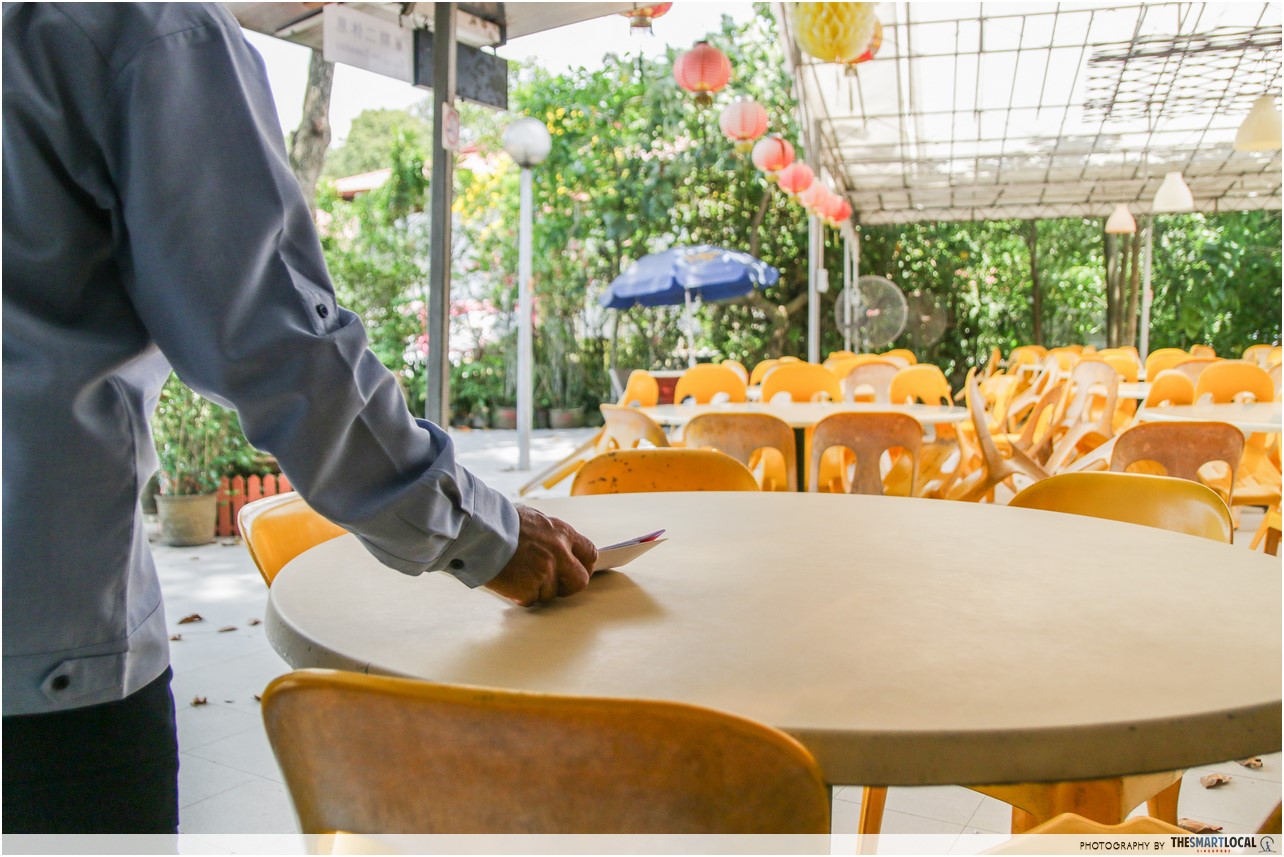 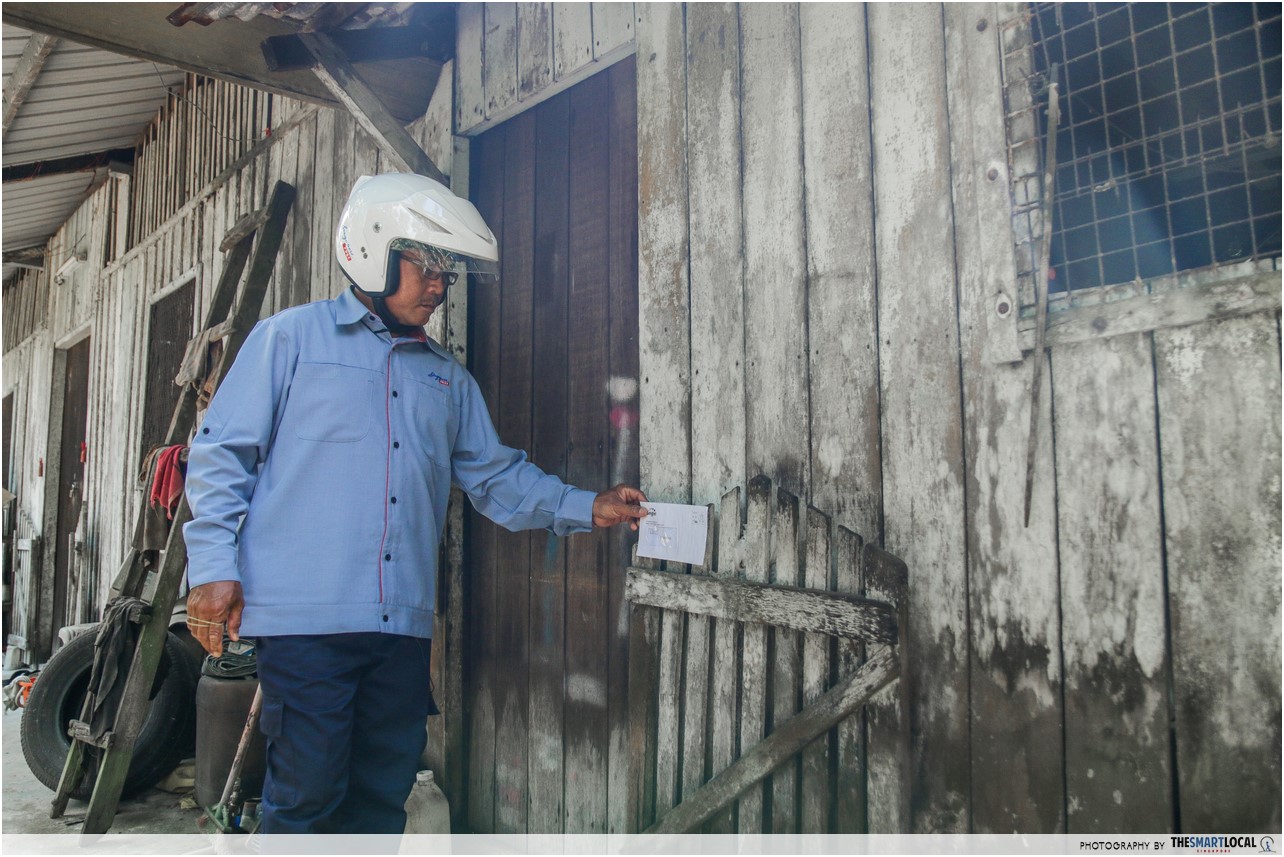 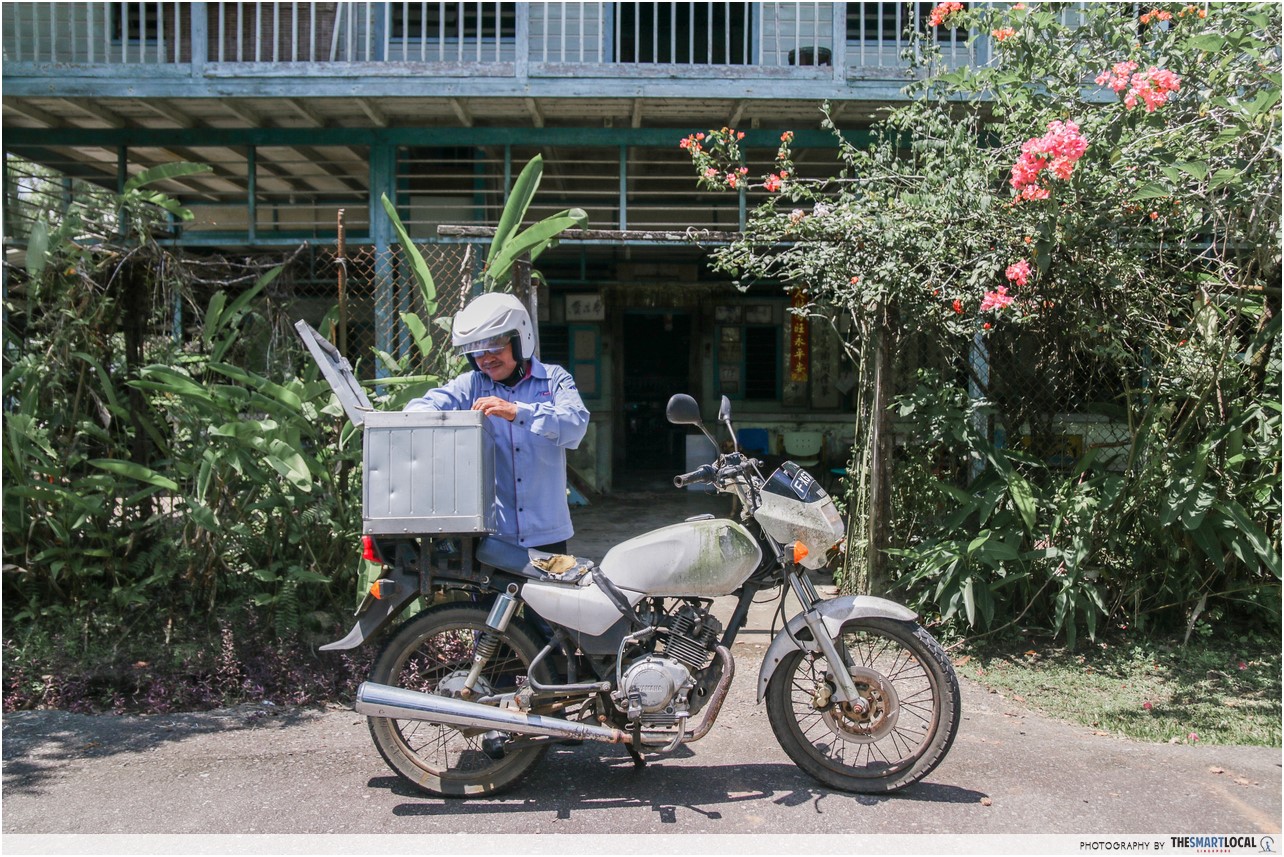 To deliver mail to houses located deeper within the island, Mr. Salleh takes his “Ubin motorbike”, which he leaves exposed to Ubin’s weather after his mail runs. Just like the algae on this bike, Ubin has grown on Mr. Salleh – he loves every moment of it. 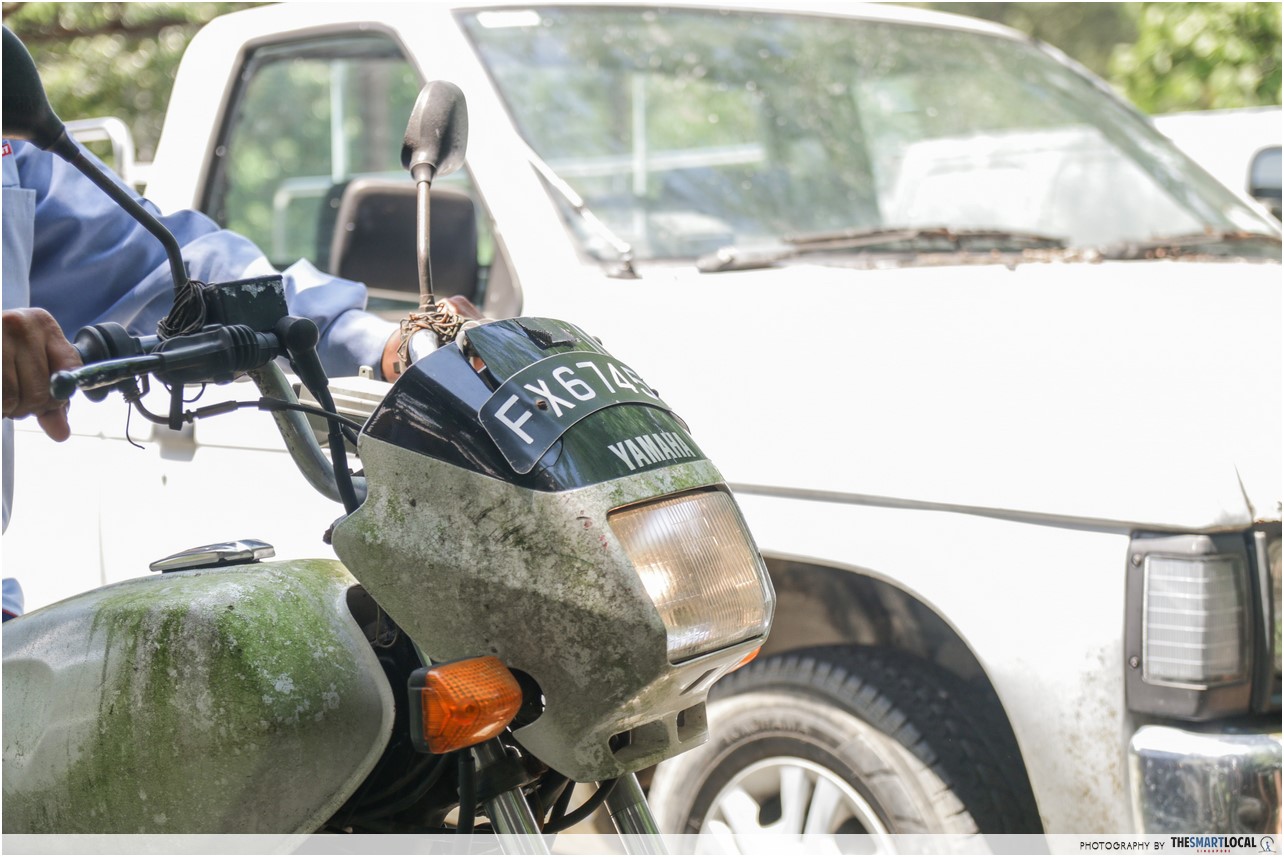 Getting to some houses can get pretty tricky, especially when the dirt tracks get wet. Mr. Salleh’s motorbike has been caught in lorongs before, but the residents banded together through word of mouth, helping him get his motorbike out safely. 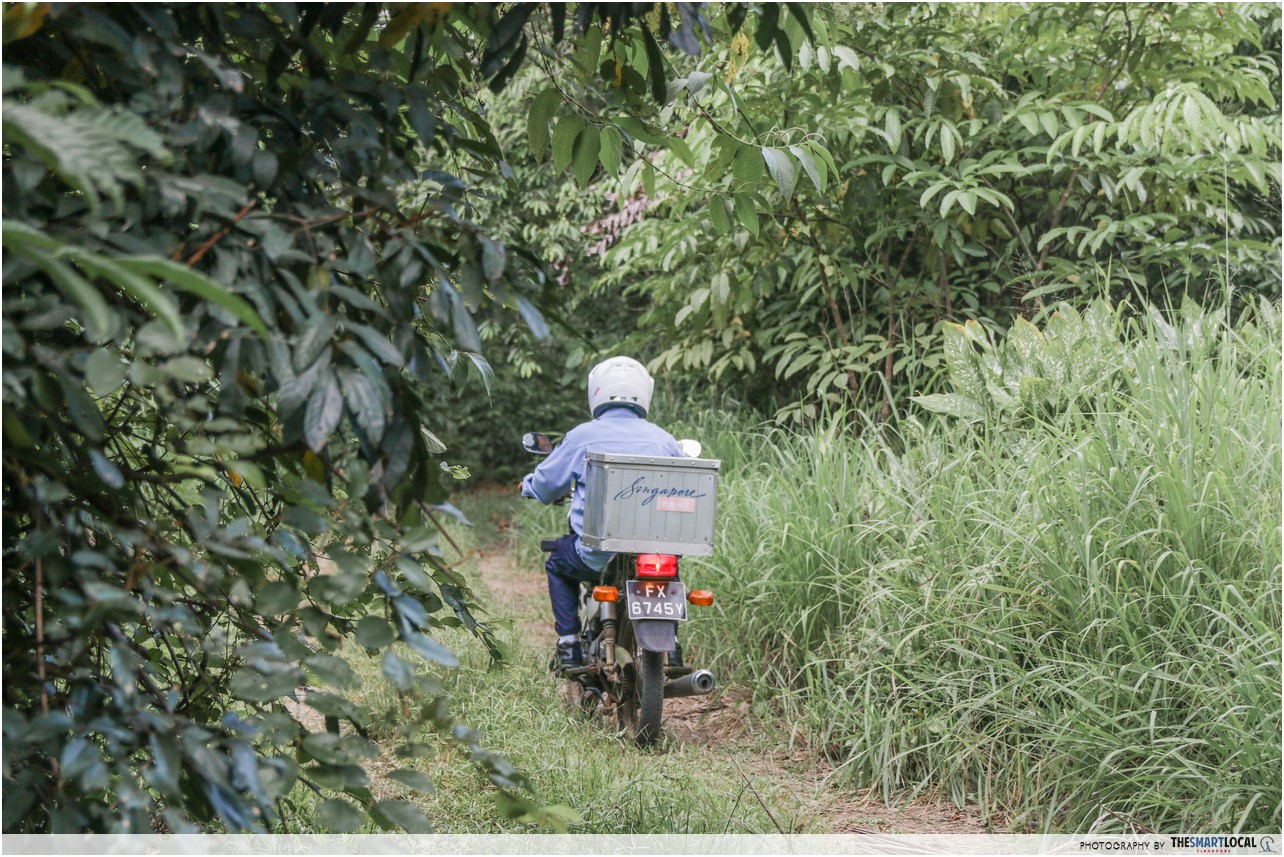 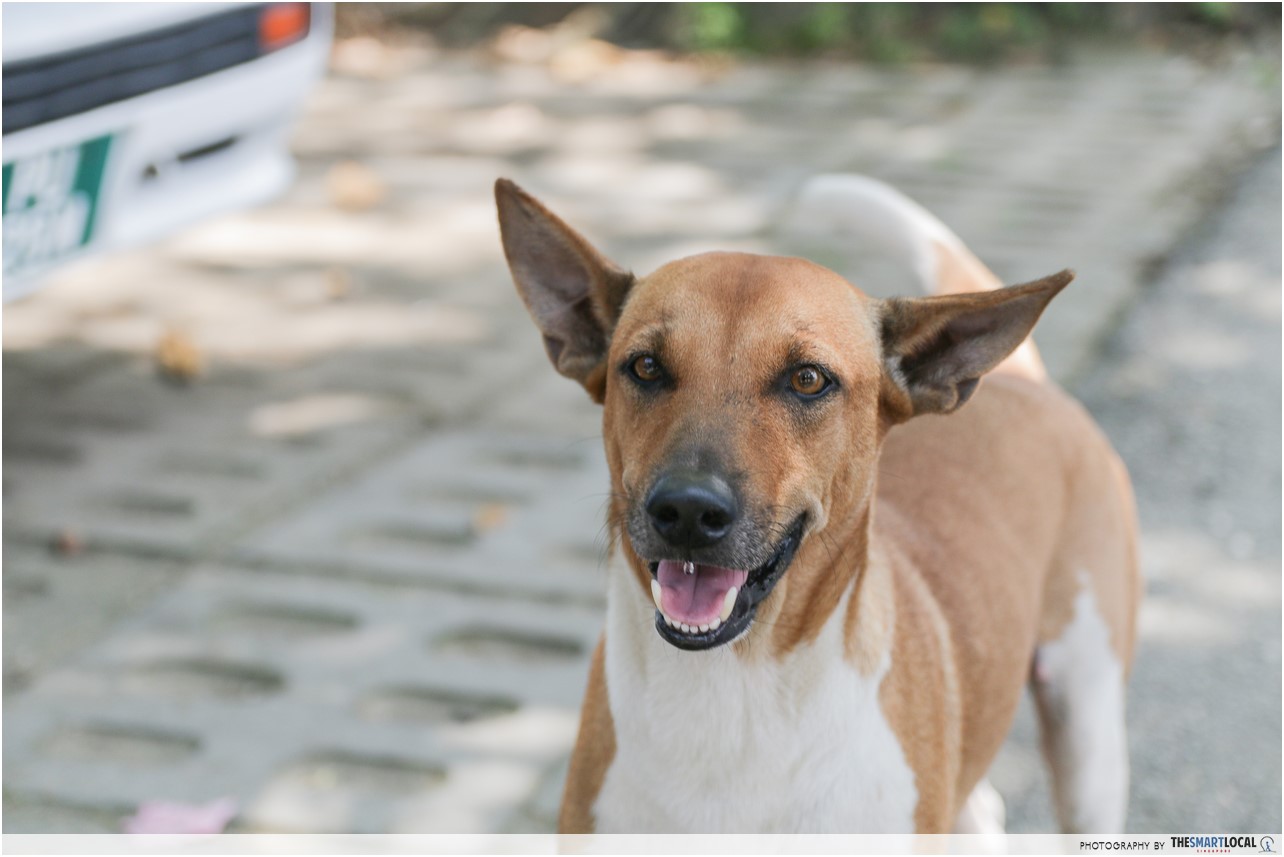 The weather isn’t the only thing that hinders Mr. Salleh’s deliveries. Besides potential dog attacks, there are wild boars here that can get aggressive. Thankfully, we didn’t see any of them, but we wouldn’t envy anyone bumping into wild animals. 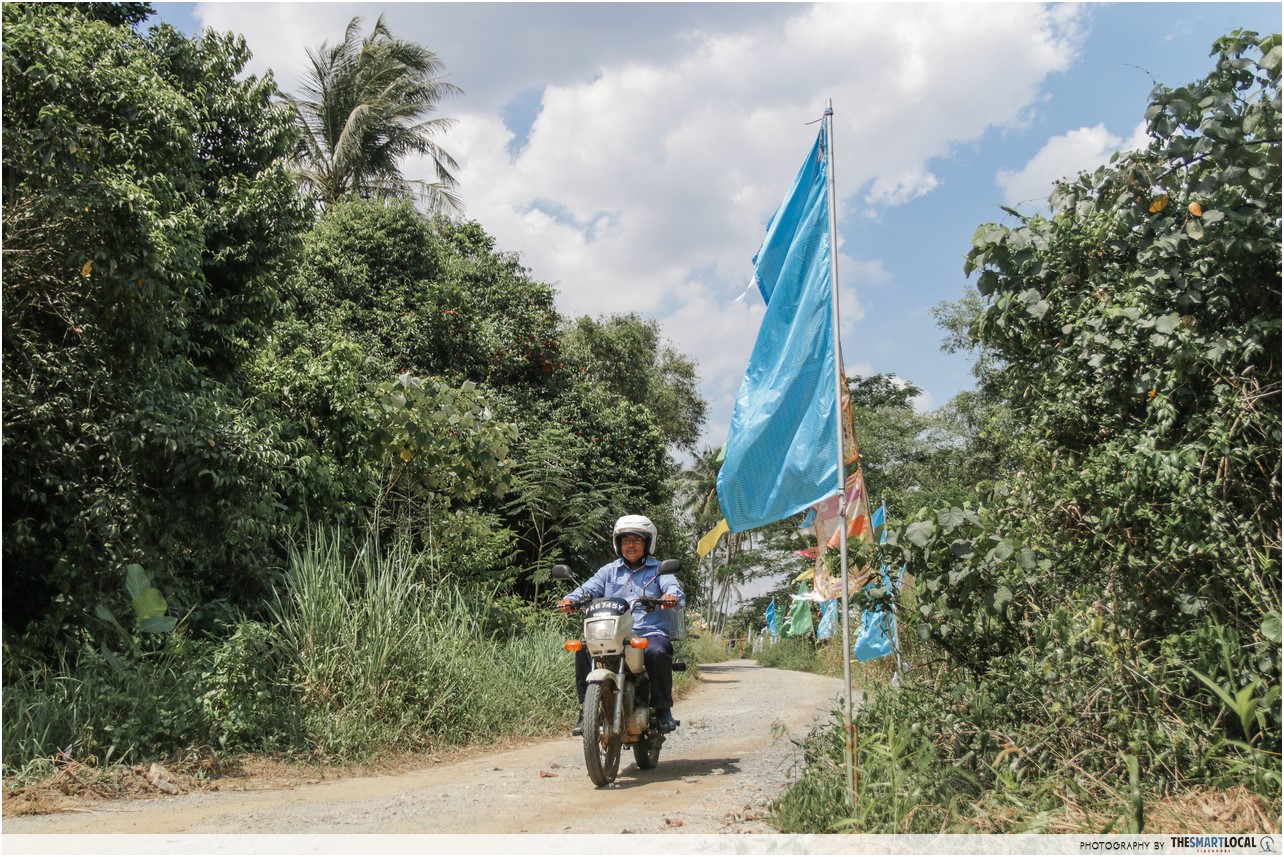 Also, the gravelled dirt paths have a tendency to puncture tyres. When that happens, Mr. Salleh has no choice but to put his back to wheeling his bike back to the jetty through the uphills and downhills of the island.

By the time all his obstacles are overcome, 2 or 3 hours would have passed. He parks his motorcycle in the same spot he does every day, and waits to take the bumboat back to the mainland.

5. The charm of Pulau Ubin 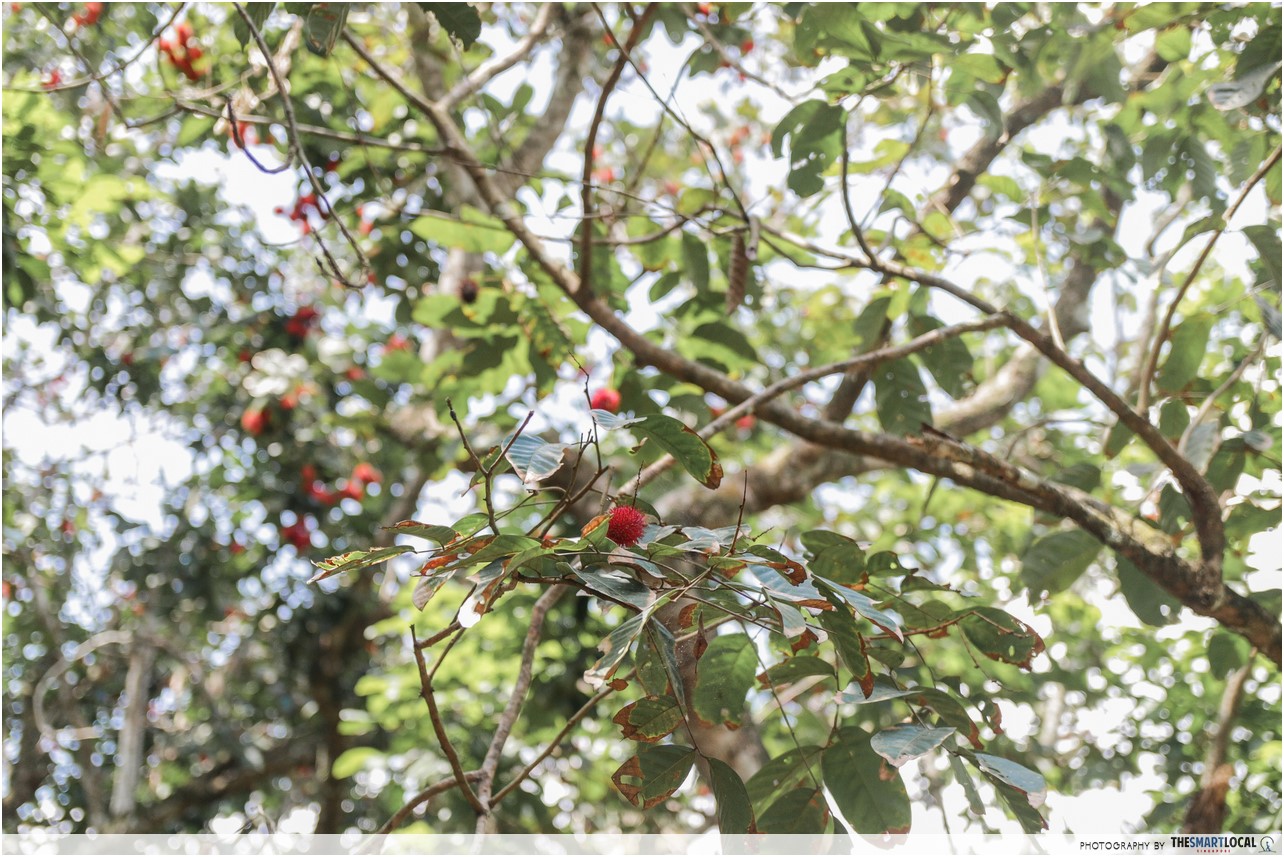 If he could choose again, Mr. Salleh says he’d still choose to be assigned to Ubin, even if it means much more physical work than his colleagues. His favourite things about the island? Its kampong spirit, friendly faces, and free rambutans, which an Ubin resident once gave him to thank him for delivering mail.

The kampong spirit manifests itself in different ways – every Chinese New Year, residents pool together to pass Mr. Salleh an angpao to thank him for going through all the trouble of getting to their houses. 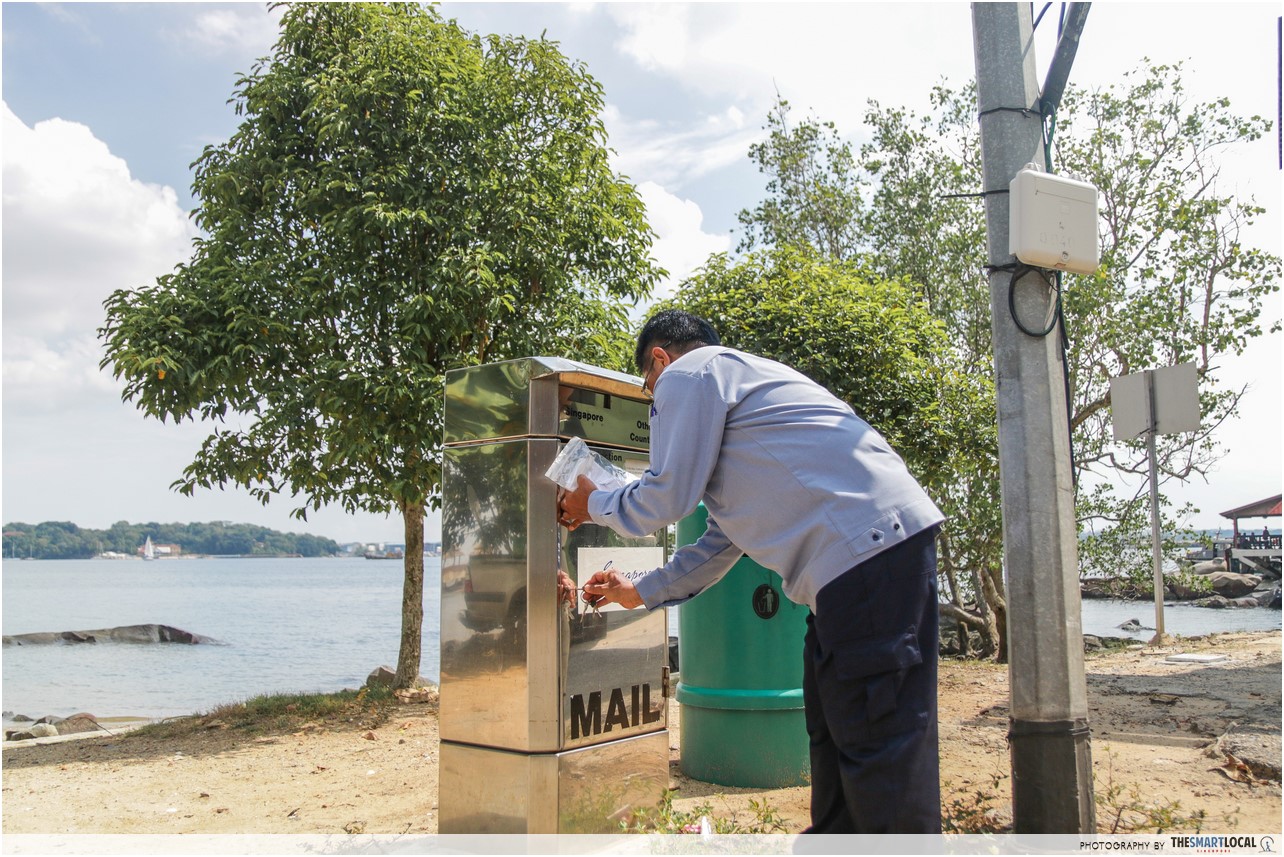 “If you use a drone, there’s no motorcycle sound. Because they’ve lived here for so long, they know whose motorcycle sound it is. When they hear me, they come out and say ‘Hi Postman!’”

The demand for snail mail is dwindling, and with residents moving out, posting mail to Ubin might be obsolete one day. Still, Mr. Salleh believes in personally going to post mail.

If drones are one day replacing postmen like Mr. Salleh, the accompanying human touch that comes with our mail may be gone forever. Think about it: no more sweet postmen complimenting aunties on their swaggy perms: 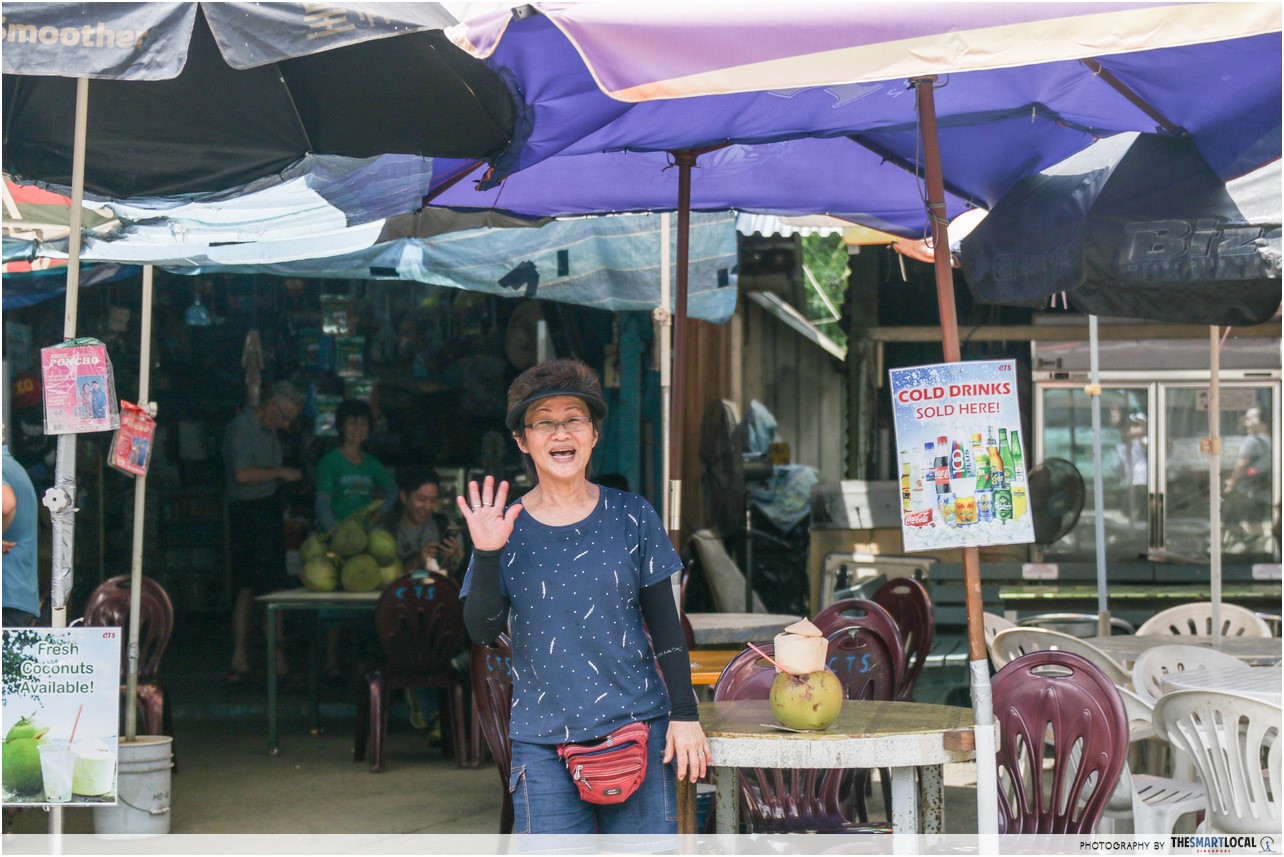 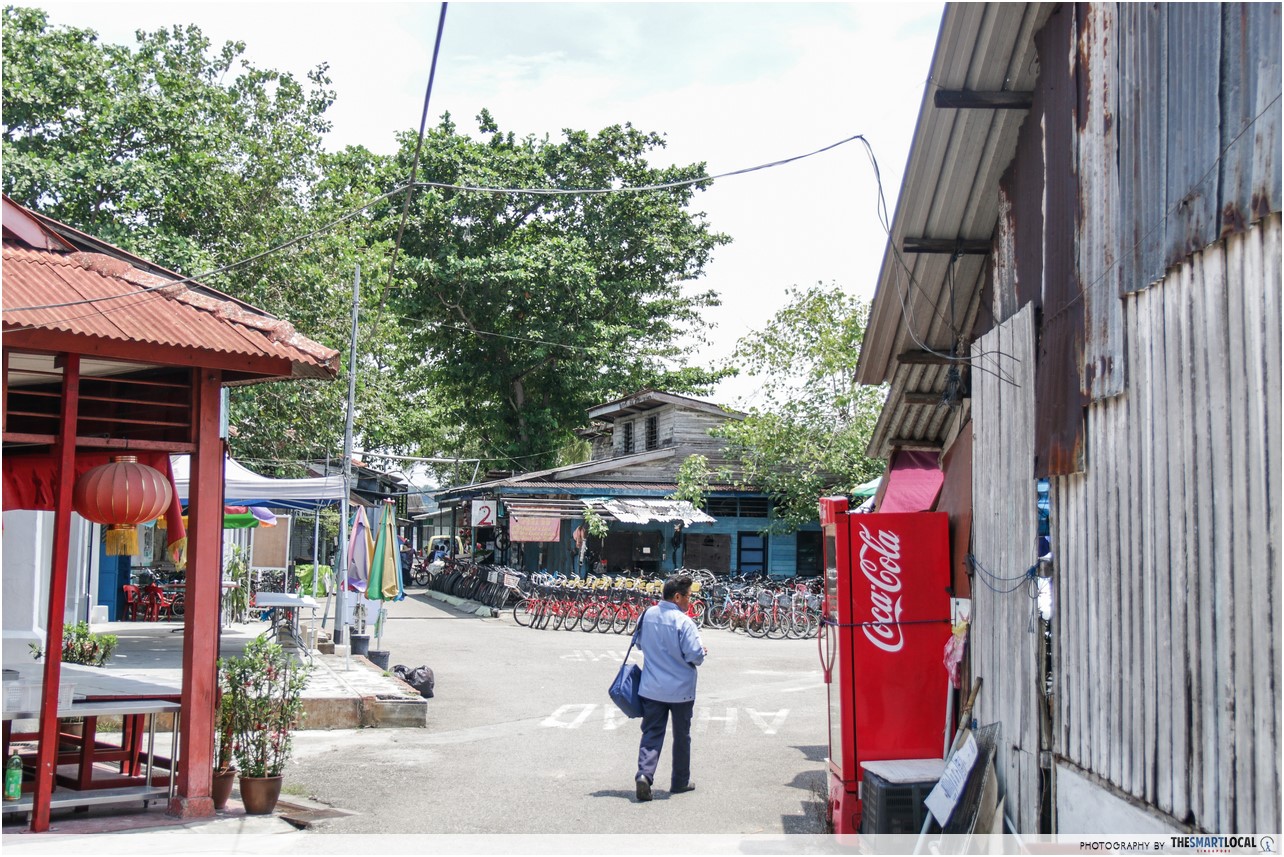 There’s no guarantee that Mr. Salleh will always arrive at Ubin’s shores with his blue bag of mail around his shoulder. One day, he might wake up and find that he’s lost his job to a heartless, lifeless machine.

It’s important to remember that things weren’t always like this. There was a time when our parents would consider neighbours as friends, friends as family, and postmen as their abangs. The disappearing kampong spirit is all the talk these days, but unless you witness it, its disappearance seems unimportant compared to the next update of Pokemon Go. 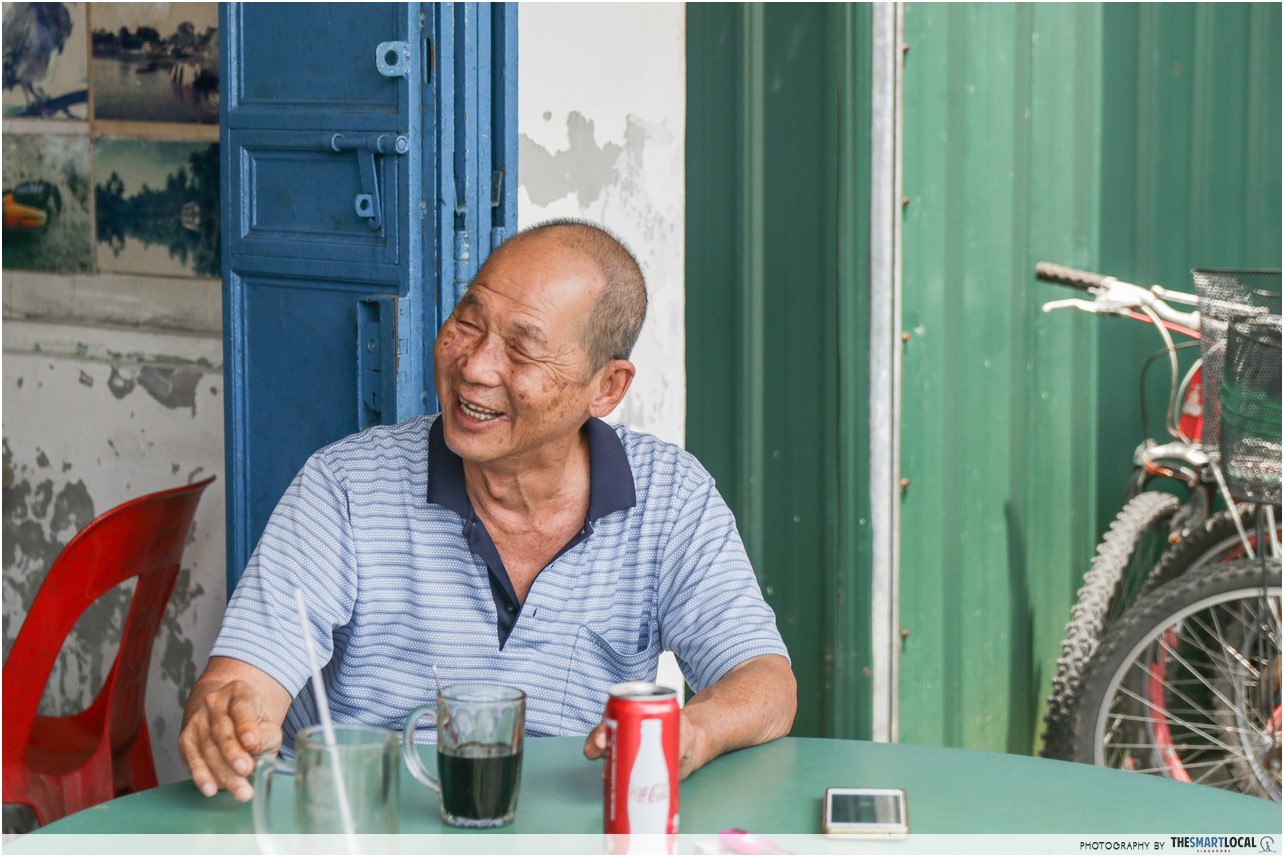 It only takes 3 seconds to wave to your postman, 5 seconds to include a greeting, and another 3 minutes to talk to him about what he had for breakfast, or if his day was going alright. Kampong spirit will only disappear if we let it.

And if we hold the kampong spirit close to us, not even time will be able to take this human touch away.

The pictures in this article were taken by Cheryl Tay. 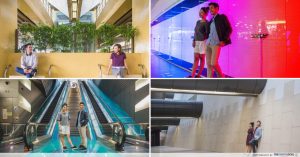