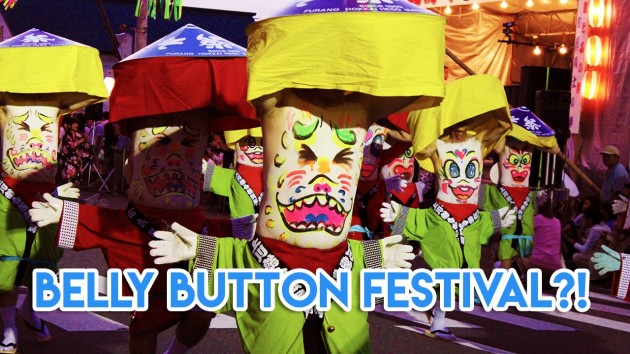 With over two hundred thousand matsuris (festivals) celebrated annually all over Japan, there’s more than plenty to commemorate at least one each day – and many of them never fall short of being gloriously festive, with firework displays, enormous floats and carnival fun – the whole shebang.

No, these aren’t your typical hipster affairs a la Laneway or Coachella – from sumos making babies cry, to setting a mountain on fire, here are some of the wackiest Japanese festivals that we found: 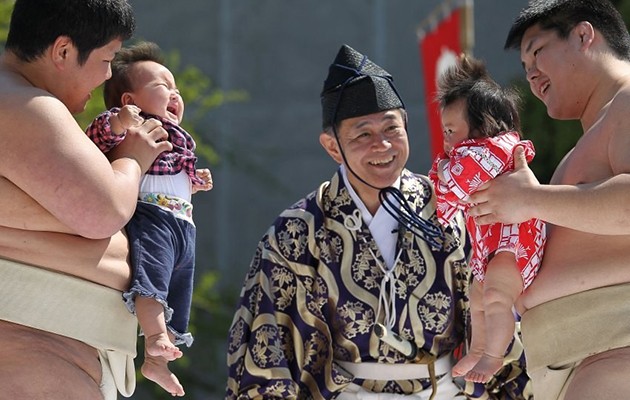 When you think of sumos and cute little kids, the first image that comes to mind is probably one of those d’awww-inducing Nippon Paint advertisements. At Konaki Sumo Matsuri, there’s no such swooning – sumos hold up babies that are barely a year old in an attempt to make them cry. There’s even a referee to decide on the winning baby – the one who cries loudest and longest! 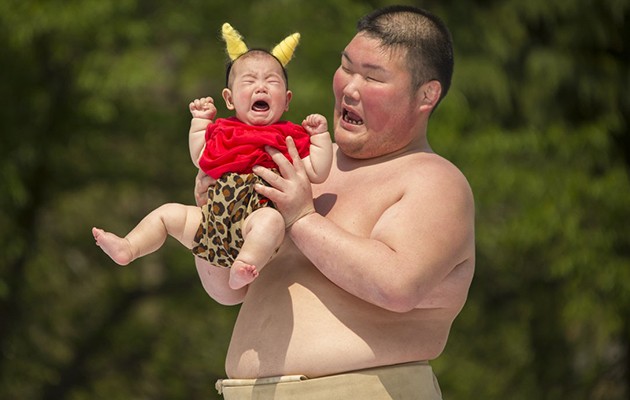 But before you cry foul, know that this 400-year-old tradition is rooted in good intentions – to ward off evil spirits and promise the babies good health.

Where: Throughout Japan, but the one in Asakusa, Tokyo is most popular
When: 22 April 2018 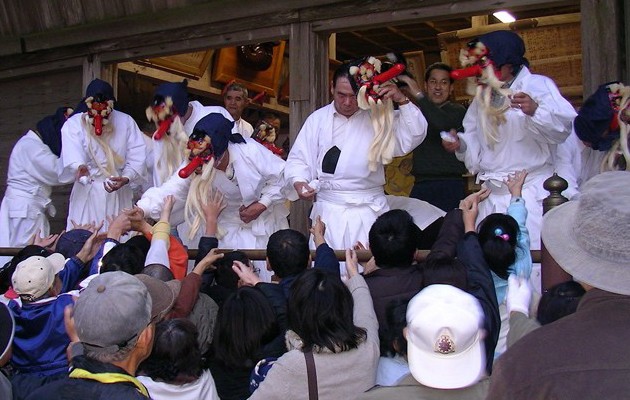 PSA for puritans looking to let out some pent-up frustration: Akutai Matsuri is the festival for you. Every third Sunday in December, huge crowds gather atop Mount Atago to cuss out priests. And they don’t do this for naught – dressed as demons, these priests go around parading and making offerings while the crowd yells mild insults at them, as a means of casting away evil spirits. 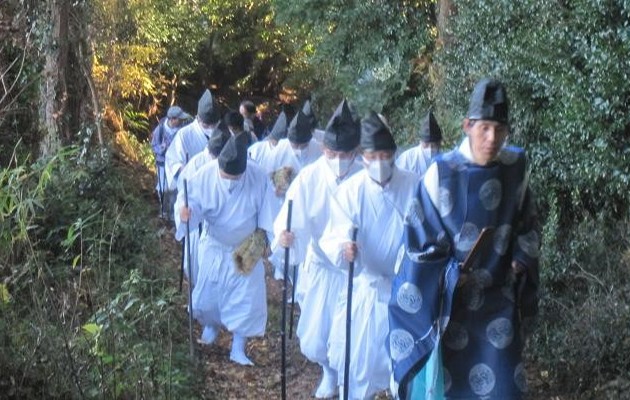 You now have a good excuse to hurl expletives at someone – albeit in a restrained manner. Just tell them that you’re politely casting the devil away. 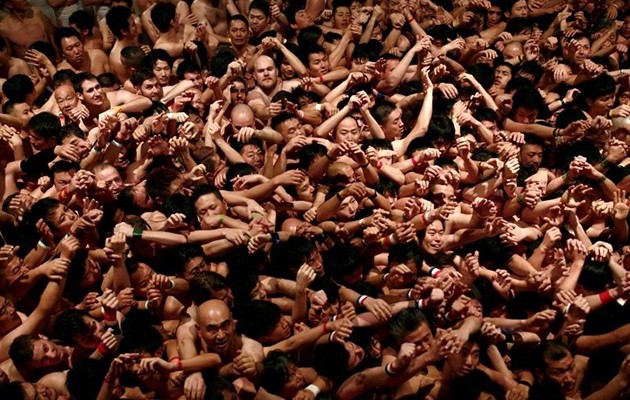 Hold your horses – this “naked” festival doesn’t actually involve full-on nudity. Participants of Hadaka Matsuri – strictly men – are dressed in fundoshi (loincloth), some even in happi coats. The procession itself is almost rave-like – thousands of these men struggle against one another for a chance to gain possession of a pair of lucky charms thrown by a priest. 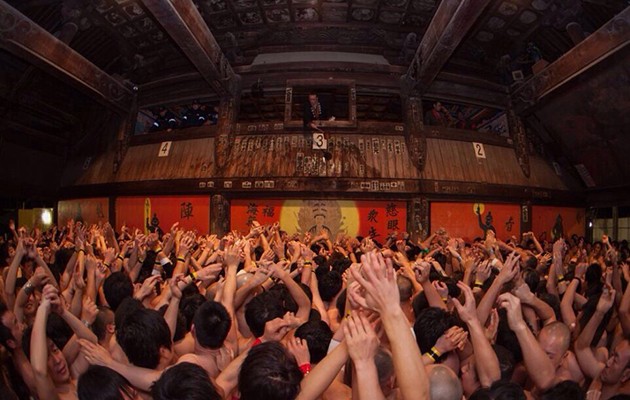 The action happens right at midnight, where snatching and prying is fair game. The ultimate winner is the one who manages to place the charms into a special allocated box.

Where: Throughout Japan, but the one in Okayama, Okayama Prefecture is most popular
When: 17 February 2018 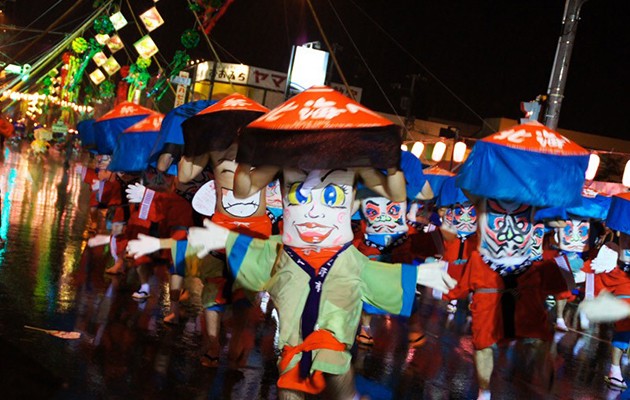 No need to worry about having a hot bod for this festival – it’s all about displaying the wackiest body art. Painted midriffs and gaudy costumes make Hokkai Heso Matsuri a visually-amusing event, one that culminates in a huge dance party where everyone gets to show off their illustrated torsos. There’s even simple choreography that attendees can learn! 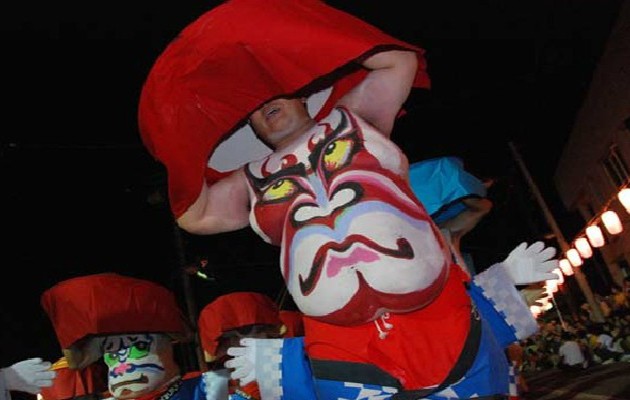 What started out as a gathering of 11 intrepid pioneers is now a major two-day spectacle that welcomes thousands of bellybutton-art enthusiasts yearly. 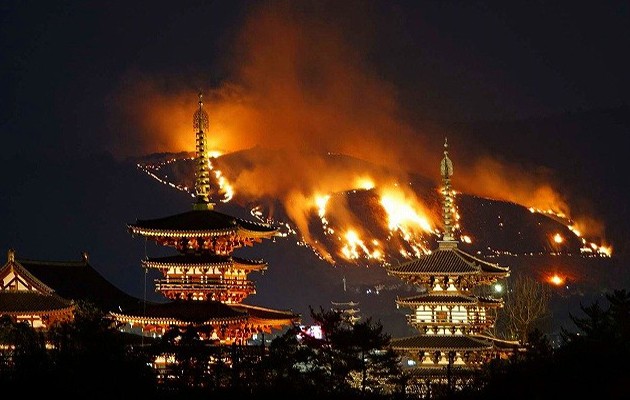 Every year, Mount Wakakusayama’s hillside is set ablaze, followed by an equally glorious display of fireworks. The origins of Wakakusa Yamayaki is vague – historical accounts point towards either a boundary conflict, or a means to chase away wild boars. Whichever it is, it’s certainly a sight to behold – one that can be seen no matter which part of Nara city you’re at. 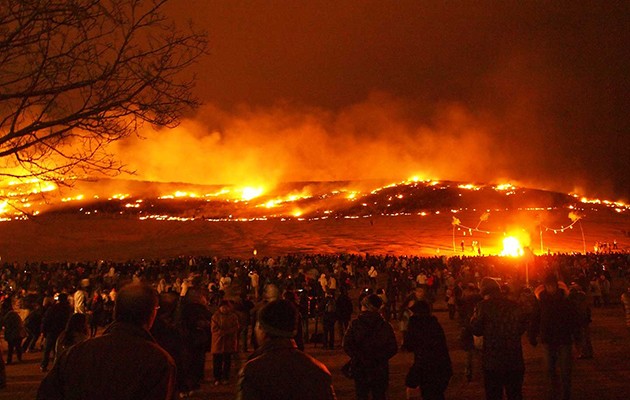 Locals typically gather at the foot of the mountain to witness this sight in person – it’s certainly a magnificent view to behold, one that many of us only ever see in either film or the news. 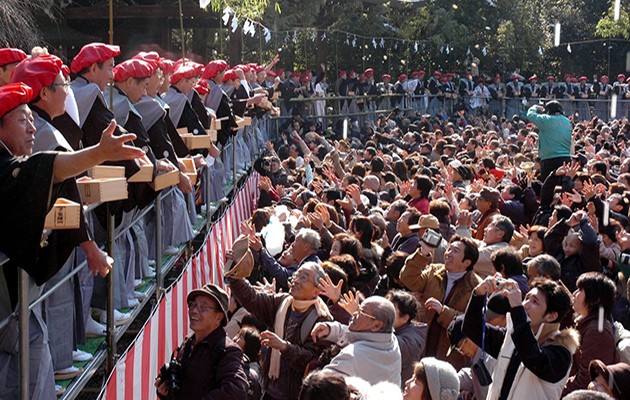 You’ve probably read about Spain’s La Tomatina and Italy’s Battle of the Oranges – frenetic festivals where participants voluntarily throw various objects at each other. Think of Setsubun as a much mellower version of this. Meant to mark the seasonal shift from winter to spring, the Japanese partake in mamemaki – the custom of bean-throwing. 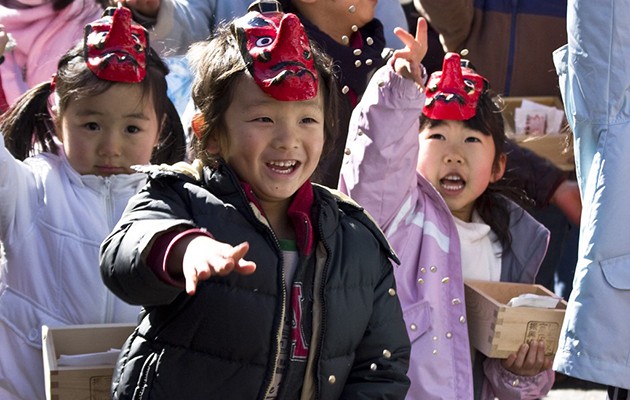 Japanese dads dress up as demons while their kids pelt them with roasted beans, to symbolize the driving away of bad spirits. For extra luck, you’re encouraged to eat the beans!

Where: Throughout Japan
When: 3 February 2018 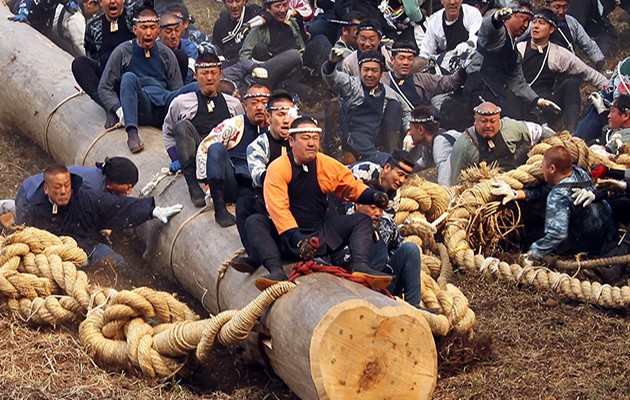 Akin to an unhinged roller coaster ride, Onbashira Festival is arguably one of Japan’s most dangerous. As a symbolic show of renewing the Suwa Grand Shrine, thousands of locals transport sixteen fir logs from the surrounding area through unforgiving terrain – even riding these massive logs as sleds – all the way to the shrine, to be erected as its new pillars. 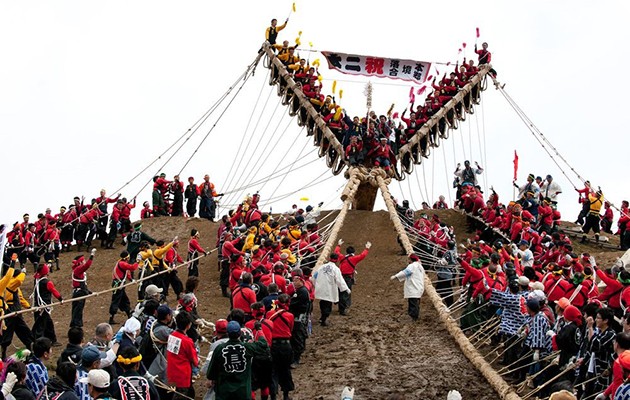 It takes place over a few months but only once every six years – the most recent one was in 2016. If you’re planning on witnessing this spectacle, now’s a good time to start making travel plans.

Where: Suwa, Nagano Prefecture
When: 2022 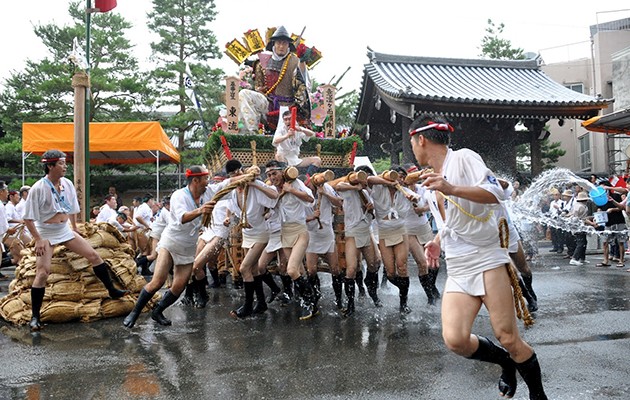 Stationary floats are common at Japanese festivals, but at the climax of Hakata Gion Yamakasa, participants take part in float-racing – they race against time as they carry 5m-high and 1-tonne-heavy kakiyama floats along a 5km course through the city. Teams take turns to go through the course, and spectators line-up hours in advance to reserve prime viewing spots. 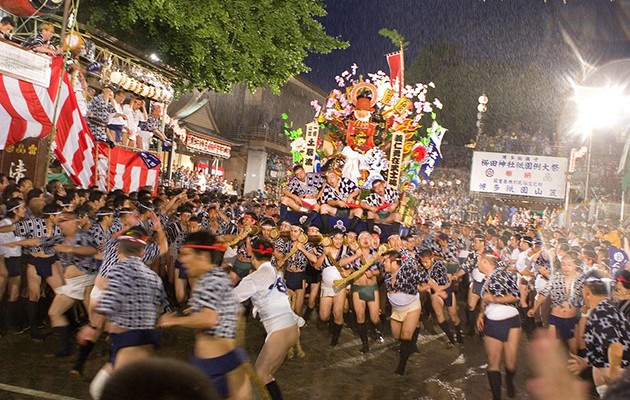 Fun fact: Throughout the entire festival period, Hakata locals abstain from eating cucumbers. This is because the round shape of sliced cucumbers look like the emblem of the festive deity Gion-sama. 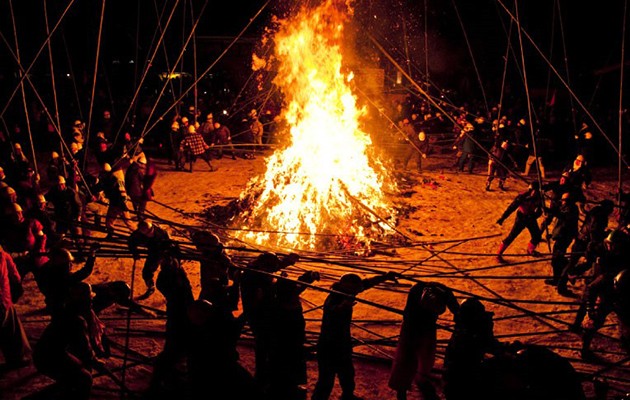 Yet another perilous festival, Takeuchi Matsuri involves men fighting each other using bamboo poles – and fire. This isn’t one of those passive civil war reenactments. Wearing helmets and protective pads, two sides engage in three rounds of bamboo brawls. The first two rounds are poles-only but the third one’s where it gets intense – they dip their poles in fire and continue fighting! 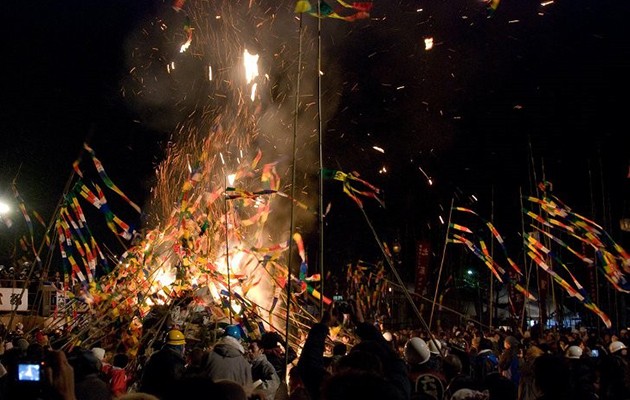 The winning side foretells the harvest forecast – if the North wins, there’ll be good harvest but if the South wins, the price of rice will increase. 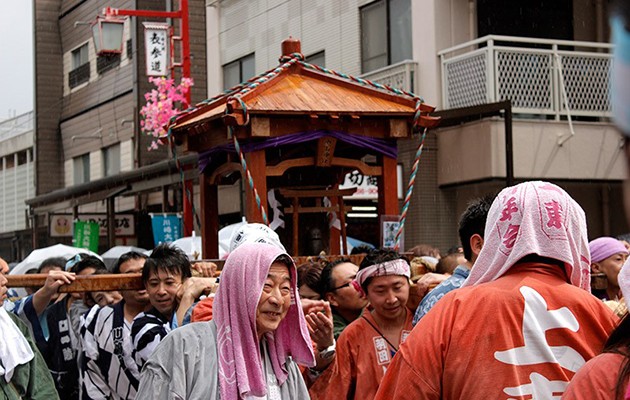 Kanamara Matsuri may have earned itself a notorious reputation over the years, but there’s actually a more religious motivation behind its continued practice. The area where the festival is held has long been regarded as sacred ground where couples pray for fertility and marital bliss. And in recent years, it’s also been positioned as a non-discriminatory event for all. 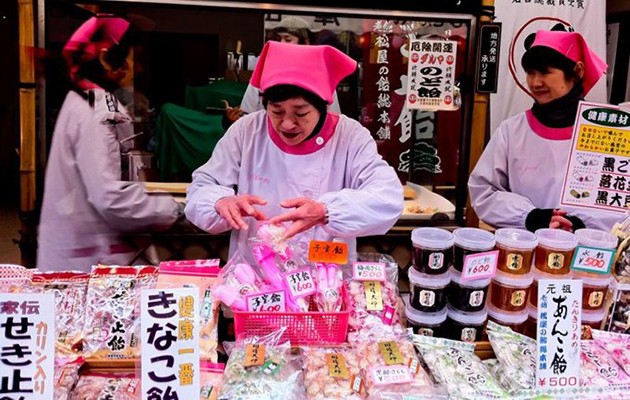 While the suggestively-shaped items and foodstuff available may seem amusing, if you decide to make your way to the festival, try to be more discerning of what the procession truly represents.

Where: Kawasaki, Kanagawa Prefecture
When: 1 April 2018

Extraordinary Japanese festivals that you’d want to partake in 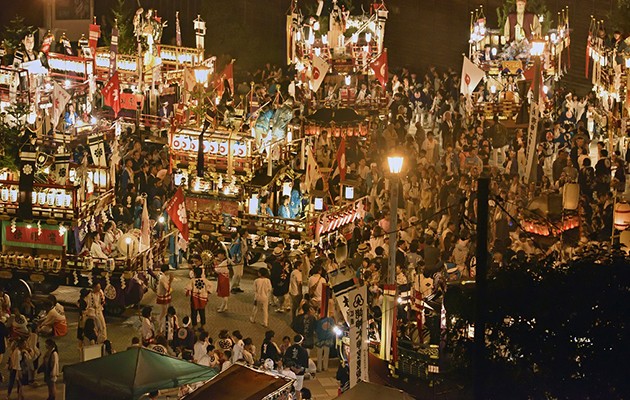 There’s no denying that Singapore can be festive in its own way – with various triumphant lion dance performances during Chinese New Year and sanguine Hari Raya songs played throughout Eid. But nothing compares to the vigour that the Japanese commit to every one of their festivals – elaborate floats, endless fireworks and people of all ages dancing out in the streets.

If you’re visiting Japan, it might be worth trying to catch some of these festivals. But even if none of them happen during your trip, look out for others – there’s bound to be at least one happening nearby!