With her arms and chest adorned in body art boldly, most would think that this talented singer-songwriter from Philadelphia is not someone you would want to mess with.

However, anyone who has watched her live would know – Christina Perri is far from a tough girl. Perri has squeezed all she can out of life. She bought a one-way ticket to Los Angeles on her 21st birthday and learned to carve a path of her own, far away from the support of her family. After a failed marriage and countless odd jobs, Perri received her big break in 2010 when her debut single, “Jar of Hearts”, was featured on So You Think You Can Dance.

Perri has since signed a record deal with Atlantic Records and has gone on to release her second studio album, Head or Heart. With all that she’s been through, Perri pours her raw emotions out into each and every song. Audiences can then tell she’s just a girl living her dream, with a heart that’s bold enough to share herself with the world.

Christina Perri was in Singapore for a one-night-only concert on 27 February 2015, at Hard Rock Hotel’s The Coliseum. The opening act for the night was none other than the talented Joel Tan, more popularly known as Gentle Bones. He recently came down to our office to perform an acoustic version of Elusive which you can check out here. The vibe and styles of his songs are similar to Perri’s, making him an apt choice.

Gentle Bones performed several of his original numbers including “Elusive”, “Settle Down” and “Until We Die”. His soulful voice, accompanied with the soothing melodies of the violin and keyboard captured the hearts of the audience. 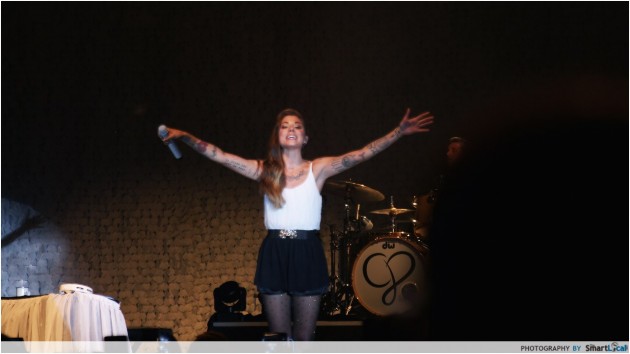 The moment Perri graced the stage, the crowd greeted her with warmth and a welcoming cheer. Her bubbly personality caught me by surprise, and unraveled any preconceived ideas I had of her as being a tough girl.

Perri kicked off the set with “Trust”, the first song she wrote for Head or Heart and symbolic of the central theme the album revolves around. Her soothing voice sounded like an angel’s, which left me ecstatic as it’s rare for singers to sound so good live! This was followed by other slow, soulful songs like “Arms” and “Distance”.

Perri then broke out into lively song and dance with “Burning Gold”. The fiery colours of red, gold and yellow lights danced on the stage’s backdrop, pushing the audience to groove along and tap their feet. The atmosphere then changed in an instant when Perri sang the first few lines of “A Thousand Years”. In unison, the audience swayed, waved their arms and sang every word at the top of their lungs. She followed this with a cover of Coldplay’s “Sky Full of Stars” and “Human”. 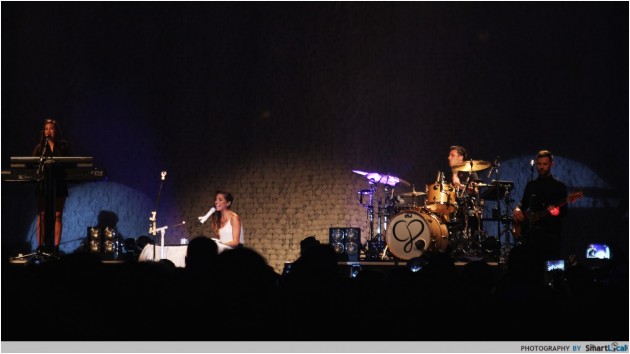 Perri finished the set with “I Believe”, a song she wrote for charity To Write Love on Her Arms, which helps people dealing with suicidal thoughts. This lovely number was the great way to end the set, installing hope and faith in all who were there. ‘‘Twas a wonderful night of good music and great fun. The audience was a mostly fun, warm crowd of youths, working adults and even some middle-aged couples. There was a couple in their 60s grooving and swaying to all of Perri’s tunes in front of me, and I couldn’t stop smiling watching them.

Christina Perri is one talented powerhouse. With her more famous songs such as “A Thousand Years” and “Jar of Hearts” being slow and full of longing, I always thought that Perri possesses a voice which is more on the mellow and soothing side. Little did I expect to be blown away by her strong vocals!

With a voice like that and a personality that steals hearts, Perri deserves all her success and then some.

This post was brought to you by Midas Promotions.