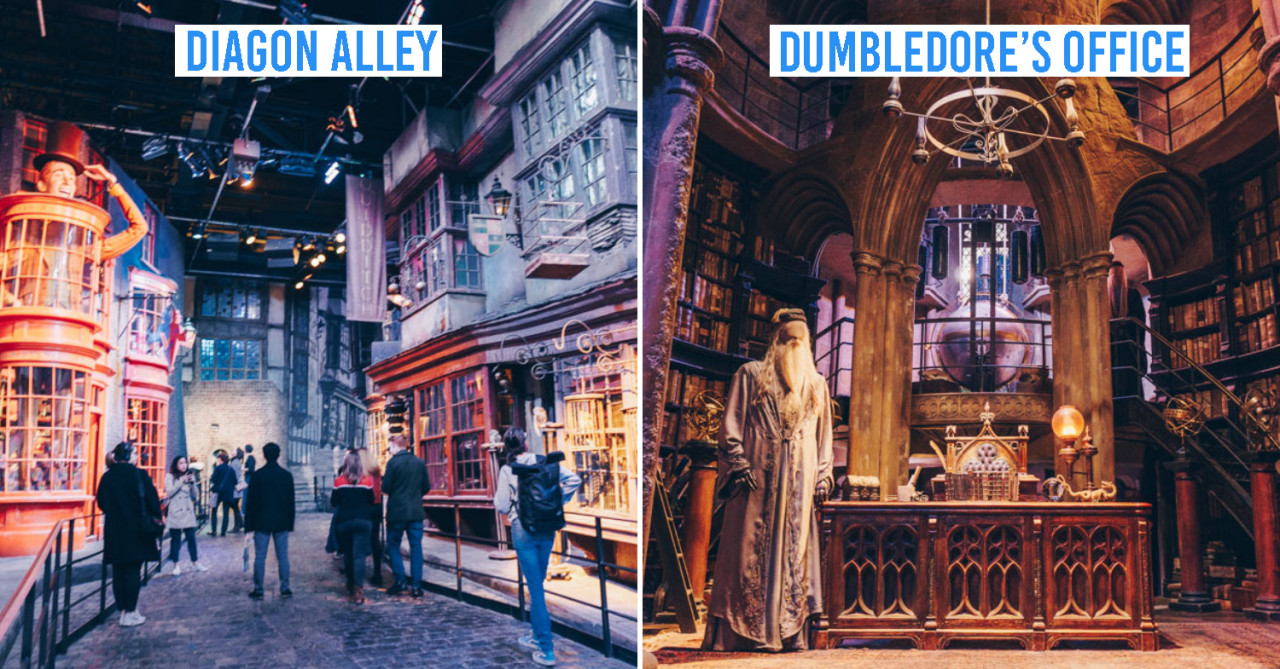 Our 11th birthdays came and went without a single Hogwarts acceptance letter in sight. It’s sad but true: we’re nothing but mere muggles who never even made it to “the wand chooses the wizard” spiel. But with London’s Harry Potter Studio Tour, it’s entirely possible to step into the wizarding world – with real-life film sets like the Great Hall and Forbidden Forest.

From interactive duelling sessions to realistic photo ops, this Studio Tour is a dream come true for all deprived Potterheads. Read on for useful insider tips and our thoughts on the new Gringotts Wizarding Bank!

Tip: Tickets sell out months beforehand so avoid any disappointment by pre-booking through Klook. 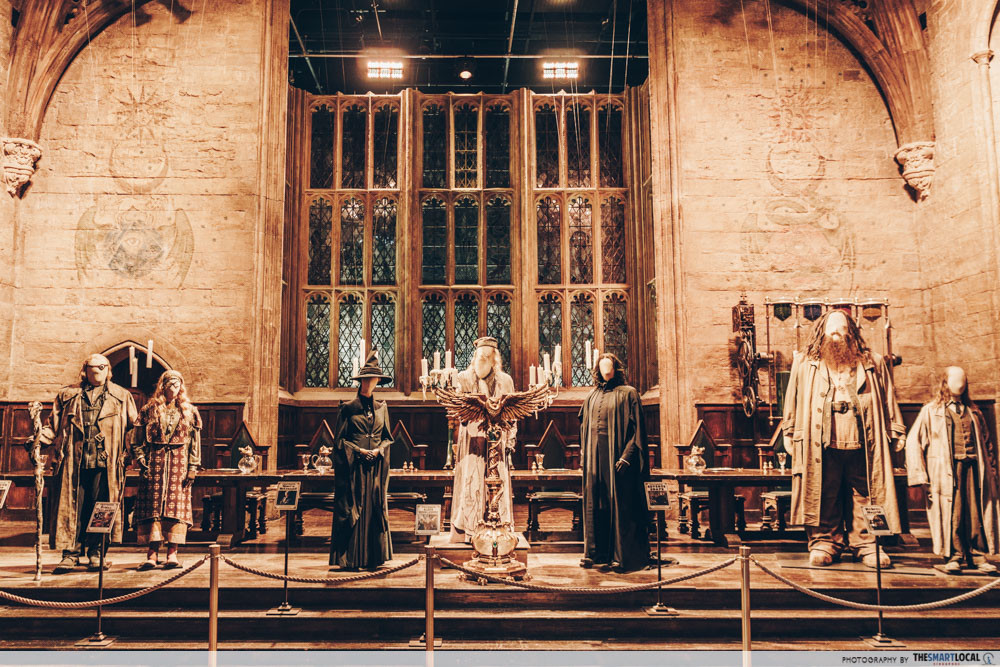 Spot familiar figures like Dumbledore, McGonagall, and Snape at the High Table

Our eyes widened in awe as soon as we strolled into the Great Hall. No exaggeration here, but the crowd – us included – simultaneously stifled gasps of wonder. While the enchanted ceiling obviously doesn’t exist in real life, the Hall’s still just how you’d imagine: you can almost hear the clatter of Hogwarts students as they load up on pumpkin juice and sausages. 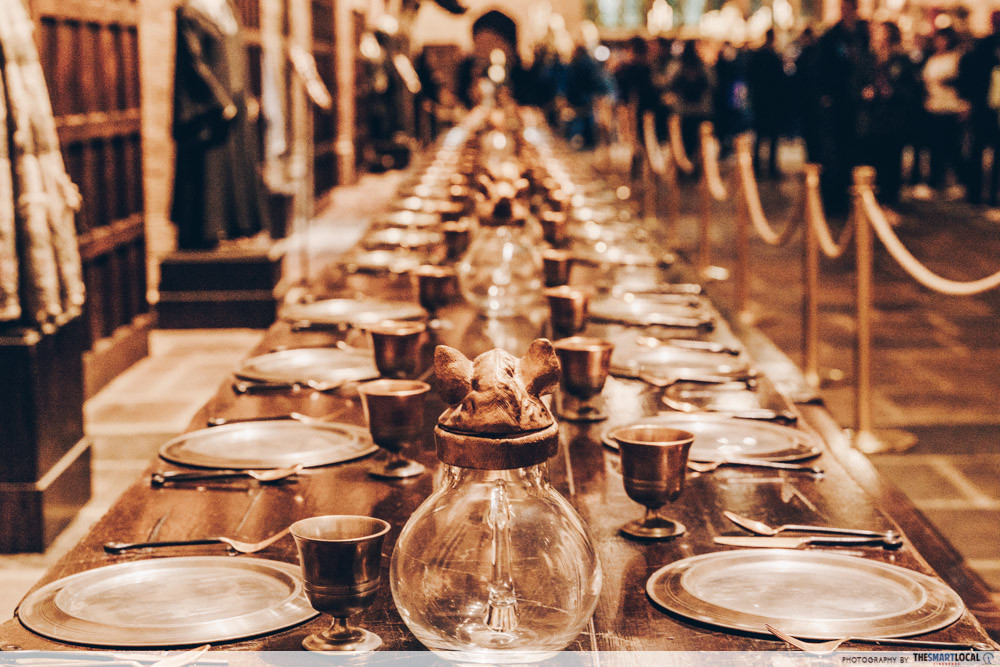 Knowing that the Golden Trio once sat in this exact Hall, we cast a curious eye on the movie props. The devil’s in the detail here, with intricate decor like rusty silverware and pitchers with animal carvings. You can get a glimpse of the many costumes lining the walls too, featuring authentic robes worn by cast members.

Tip: For clean photos with no photobombers, make sure to be in first or last. You’ll be given an approximate time of 10 or so minutes to browse before the next group enters. 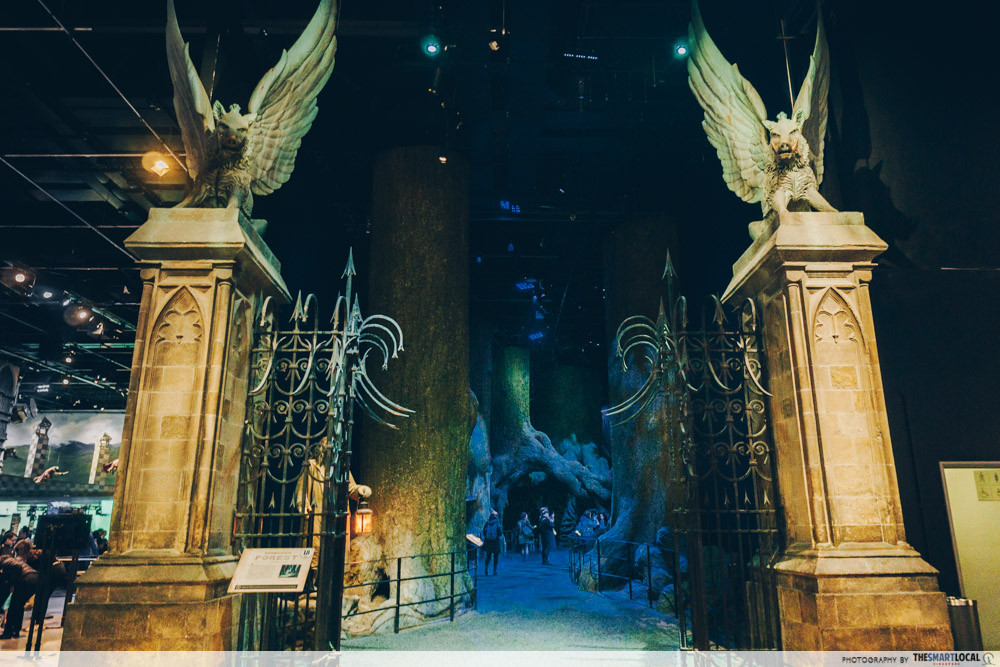 Massive columns and an ornate gate block the way between you and the Forbidden Forest. Rest assured: this set looks mysteriously eerie but definitely doesn’t house the same potentially dangerous magical creatures faced by Harry in his many detentions. 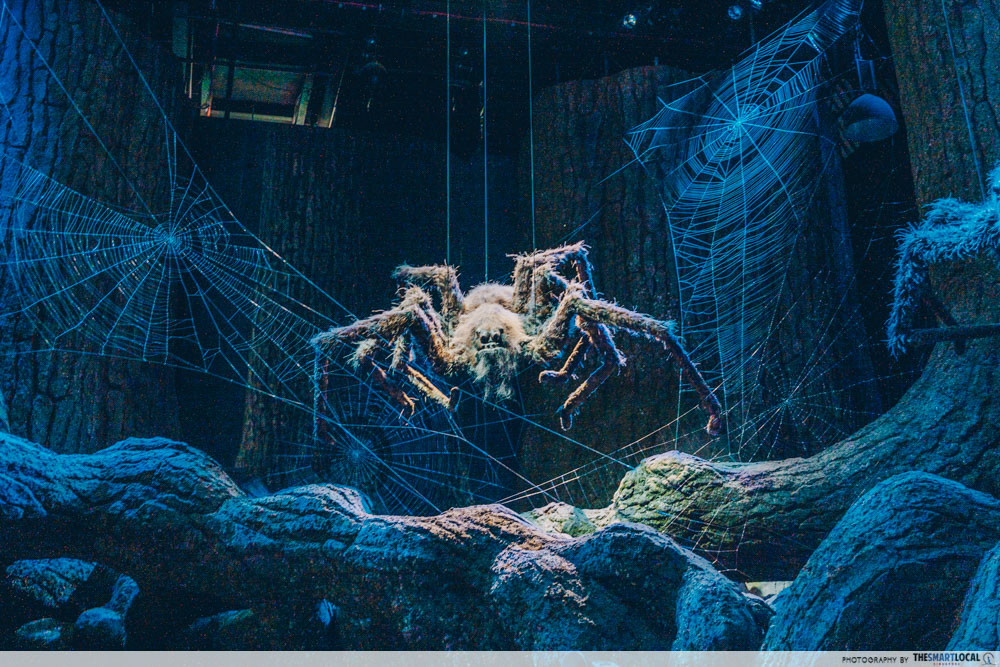 We take that back: they’ve got larger-than-life acromantula (giant spiders) roaming the forests. A word of caution to those easily spooked – there’ll be sudden claps of thunder and acromantula dropping out from the sky. When we were there, a group of teenage girls ran by us shrieking in mild terror. 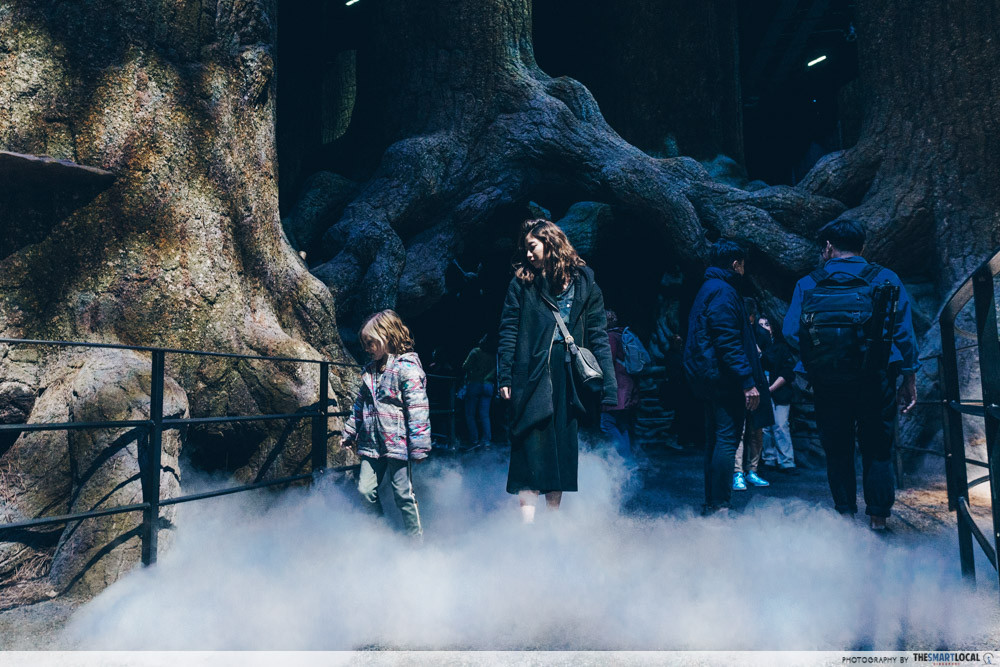 But pass through passages of fog and light effects, you’ll soon find yourself out of the Forest in no time. 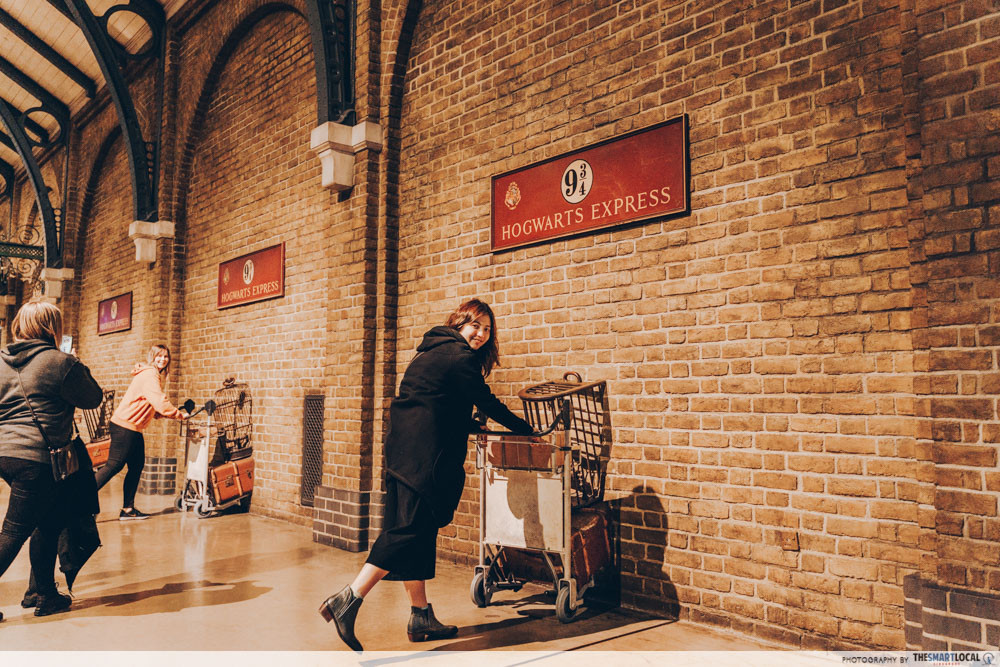 Surely you’ve seen a friend or 2 post this exact shot on Instagram: you know, the one where they’re eagerly pushing a trolley into the magical barrier of Platform 9 ¾. But instead of clambering to get the perfect trolley shot at forever-crowded King’s Cross Station, you’ve got your choice of photo props right here. 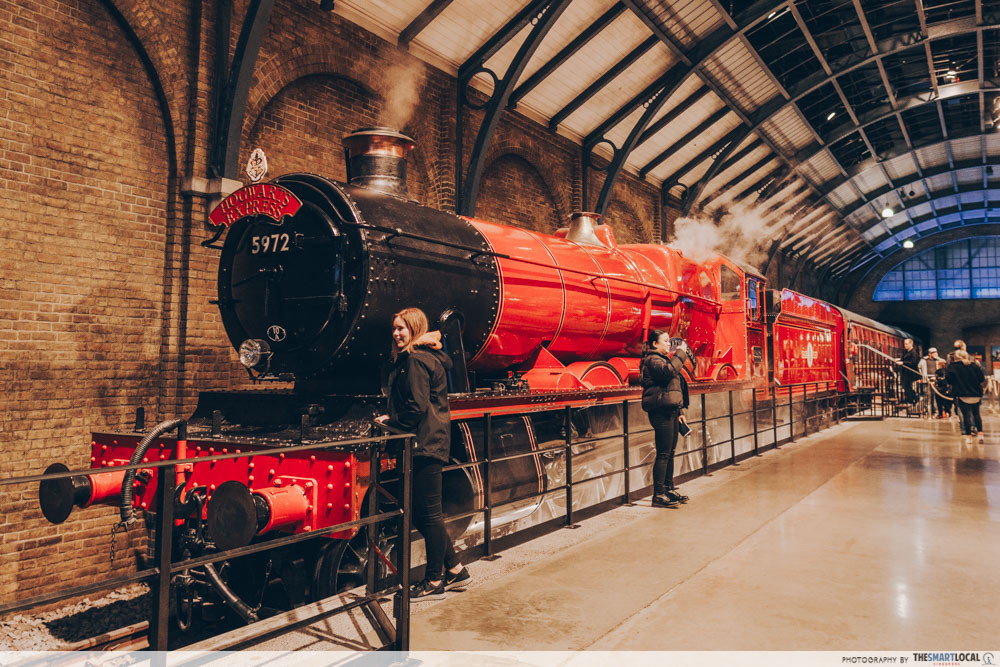 Climb aboard to leave for Hogwarts

There’s even a huge Hogwarts Express train where every now and then, you’ll see the huffing and puffing of steam and hear a piercing whistle echo through. Remember to stop by the nearby gift shop to pick up some treats from the Hogwarts Express Gift Shop. 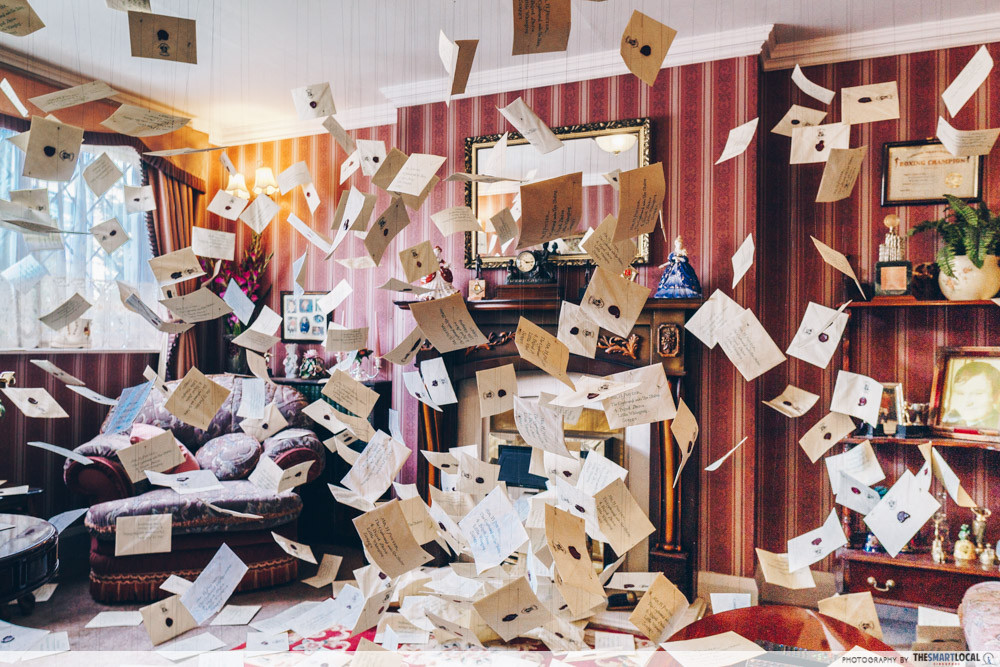 There’s a certain grandeur surrounding film sets like the Great Hall, the Forbidden Forest, and Platform 9 ¾  – those are the absolute must-visits of the entire Studio Tour. But there’s no doubt you’ll be spending your entire day gawking over the intricate film sets and authentic movie props. 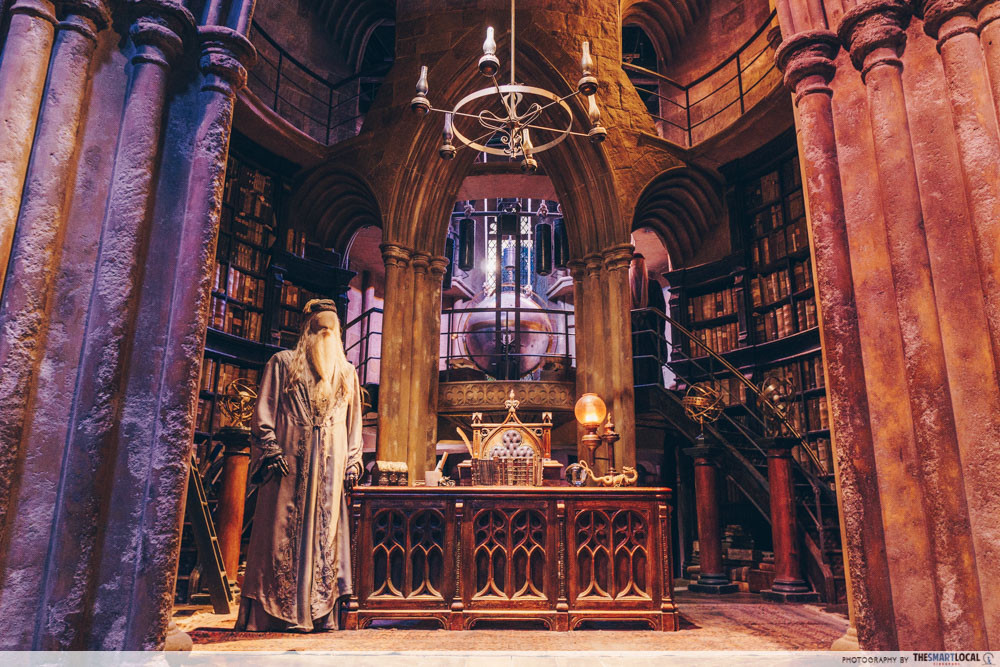 There’s a great deal of thought behind Dumbledore’s stately office, with shelves of books, massive portraits, and a perch for Fawkes to rest on

It’s almost as if you’ve entered the actual Hogwarts Castle: Dumbledore’s Office, the Gryffindor Common Room, Potions Classroom, and even Umbridge’s Office – it’s all there for you to get a behind-the-scenes glimpse into the film series. 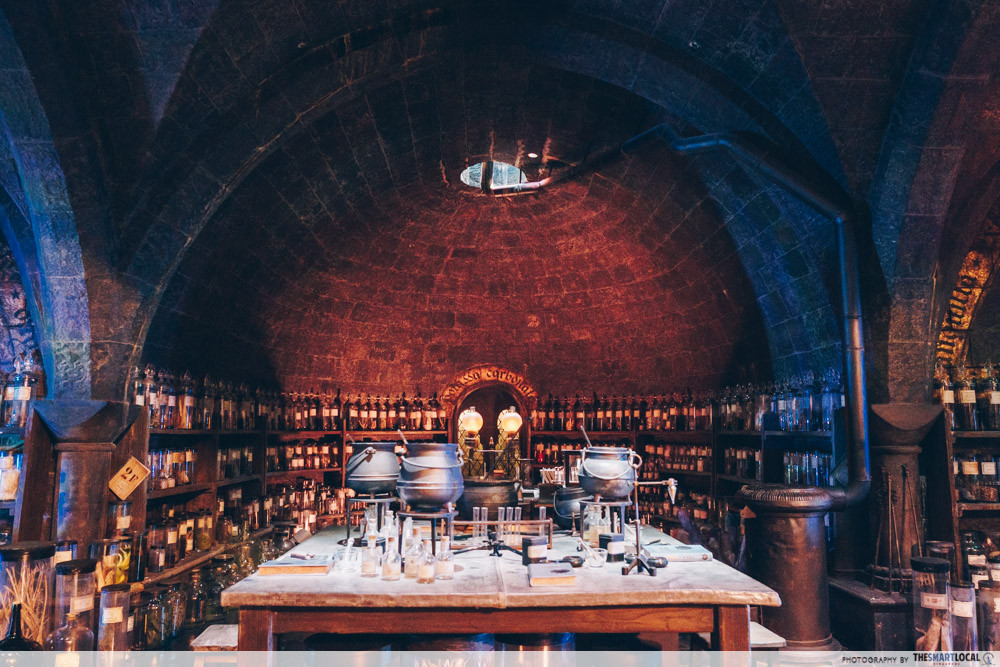 Each movie set comes with details that the regular muggle will overlook – for one, the Potions Classroom has self-stirring cauldrons and a hefty collection of Potions ingredients. 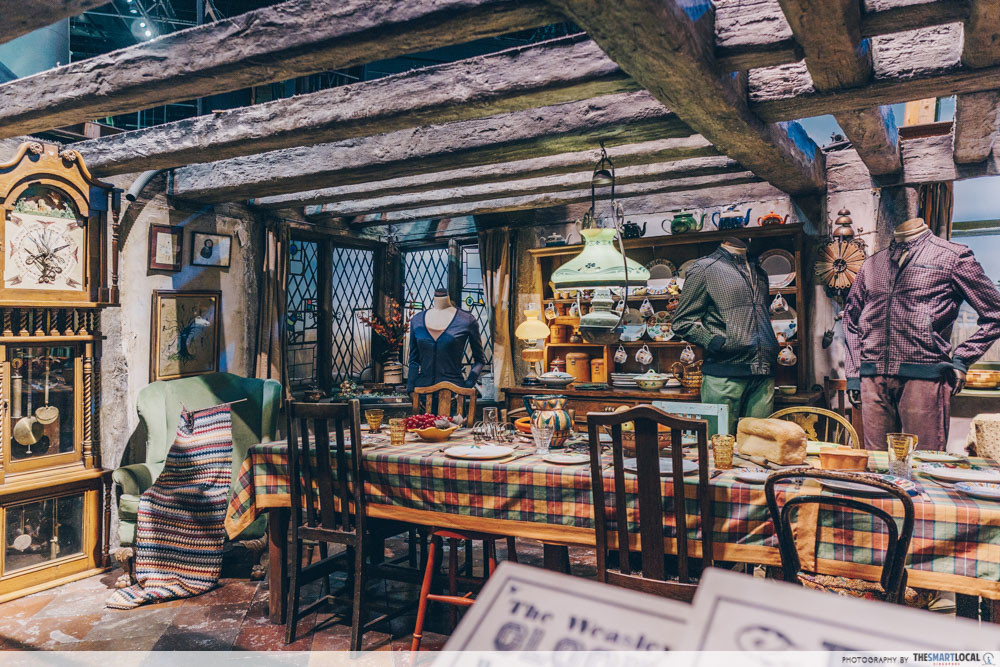 But besides the Castle’s film sets, there are plenty of others featuring iconic places like Diagon Alley and The Burrow. 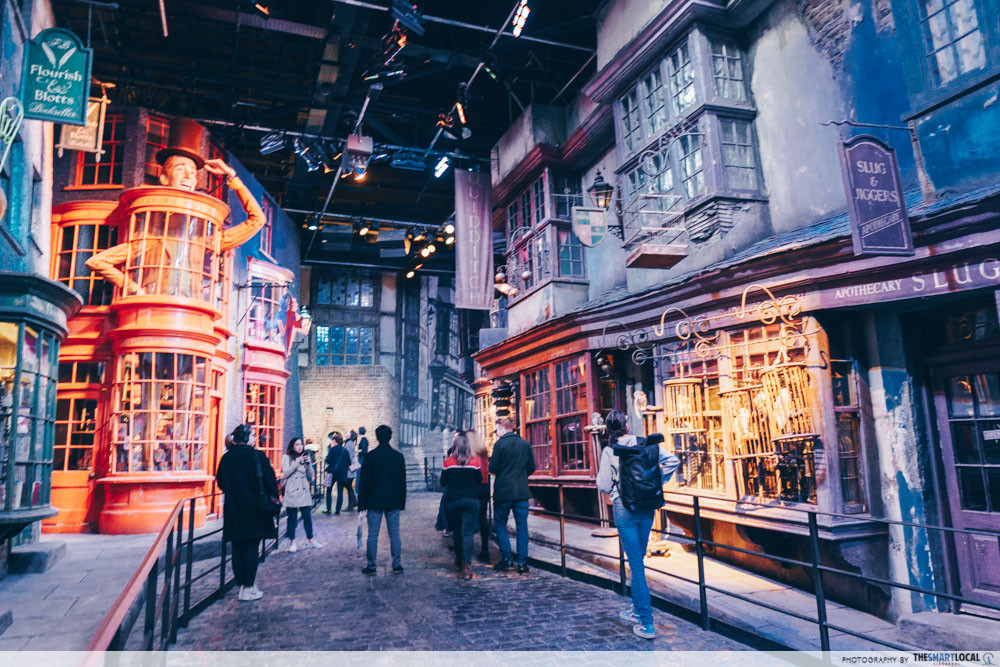 Tip: Look out for levers and interactive signs – they can be found in many film sets. Waving your hands over or tugging a lever will get the “magic” going, like self-stirring cauldrons or changing light effects. 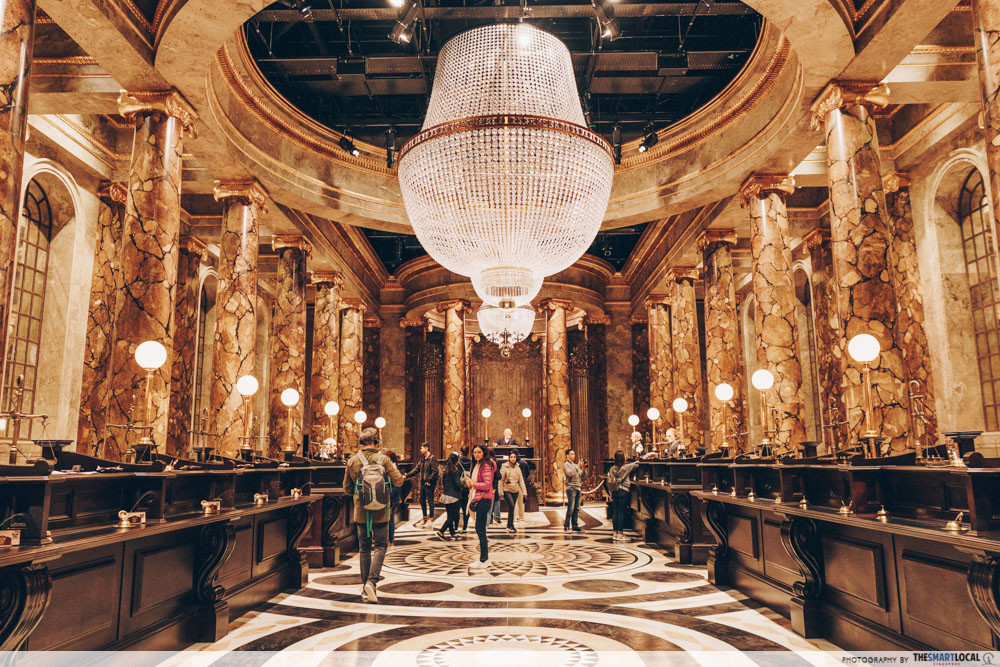 But of course, one of the biggest draw to the Studio Tour was the new opening of Gringotts Wizarding Bank. No surprises that there was massive fanfare surrounding the opening: with an opulent gold hall and Bellatrix Lestrange’s vault, the Bank is a stunning addition to the tour. 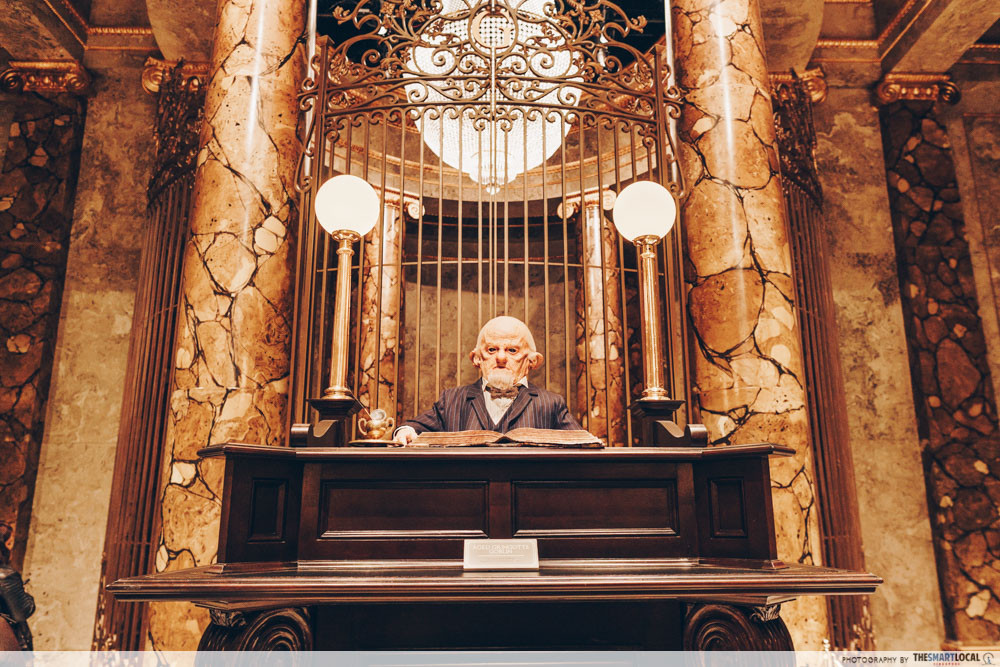 The set features the detailed construction of goblins like Griphook. Upon a closer examination, you can see the amount of effort behind each wrinkle, mole, and even wart. 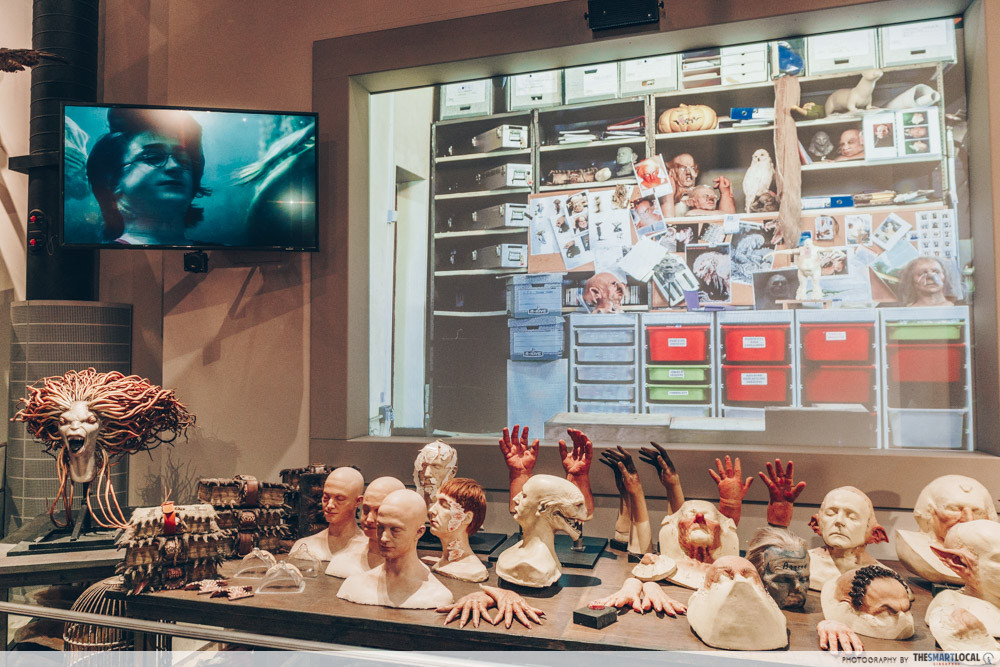 There’s also an educational corridor where you can learn how the prosthetic goblin masks are painstakingly created. 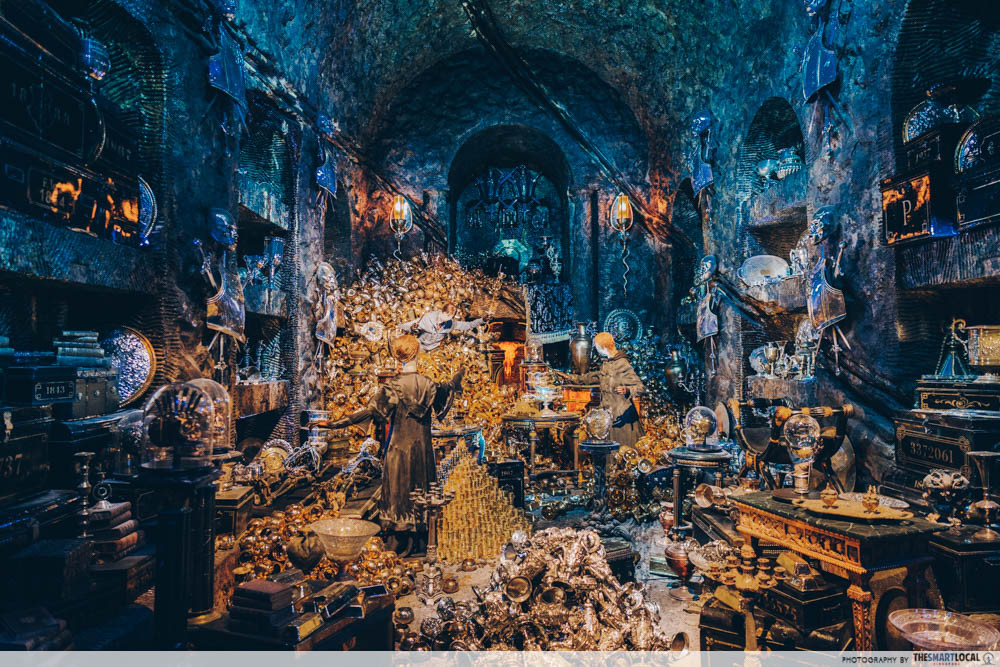 The Lestrange Vault features a stash of gold – over 210,000 coins were created for the Gringotts movie scenes

You’ll also pass by a clearing where you hear the distant huffing of an angsty dragon. Huddle up here: the show’s brief but it’s well worth the wait for its realistic 3D light and sound effects. Tension builds as the dragon takes slow steps towards you, before it lets out a gush of hot flames.

We watched this thrice since we couldn’t get over how realistic it felt!

The entire Harry Potter Studio Tour’s filled with thoughtfully crafted film sets, interactive activities, and photo ops – it’s a memorable experience perfect for every Potterhead. With various green screens and photo props, you can dodge Bludgers in an high-intensive Quidditch game or even fly the Weasley’s sky-blue Ford Anglia. 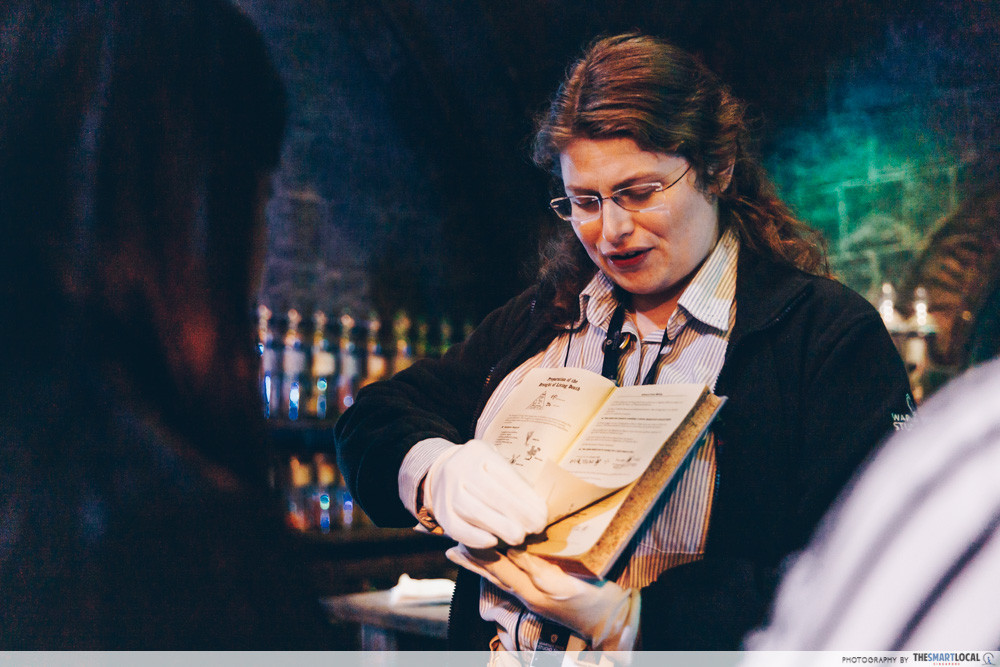 There are also special activities where you can get a crash course in Defence Against the Dark Arts. The duelling professor will guide you through proper duelling stances and wand movements before you end off with a duel. It’s not just for kids either – plenty of adults thoroughly enjoyed battling with wands. 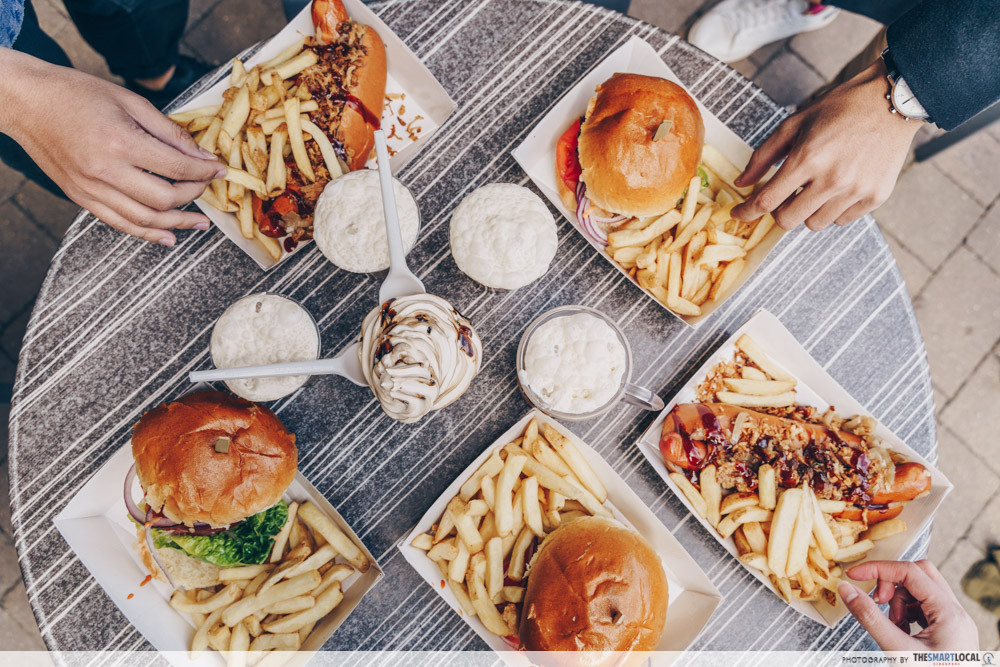 If peckish, there’s a canteen about halfway through, located near the Knight Bus and Privet Drive. Look forward to lunch classics like the Messy Hotdog (£9.95, ~S$17.50) that’s spilling over with crisp onions and the Backlot Burger (£9, ~S$17.40) that comes with 2 hand-pressed beef patties. 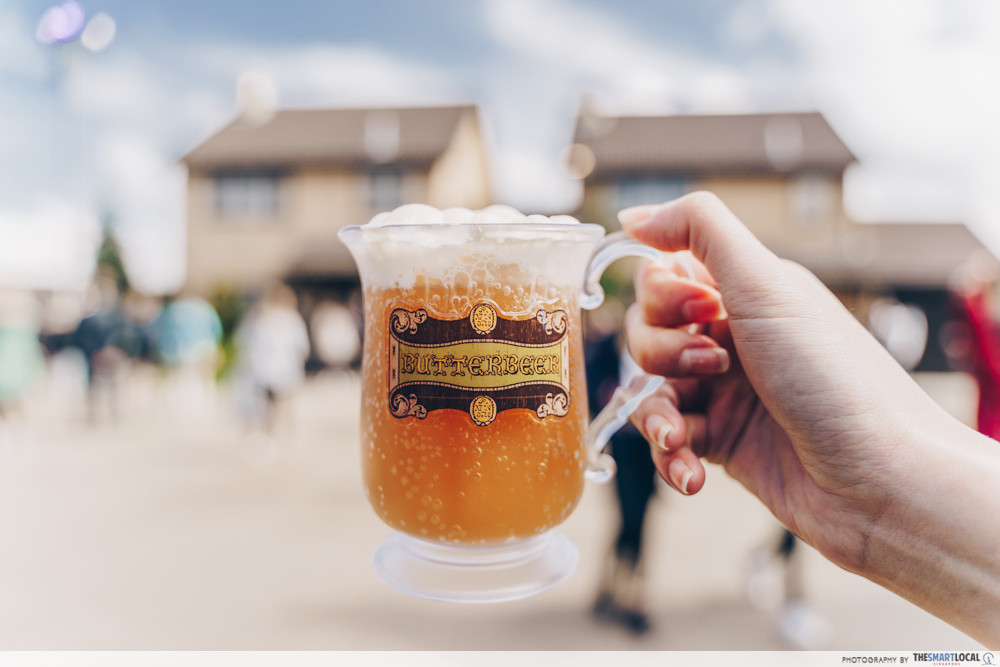 And of course, try the Butterbeer (£3.95, ~S$7) – it’s frothy, sparkling sweet, and makes for a refreshing thirst quencher. 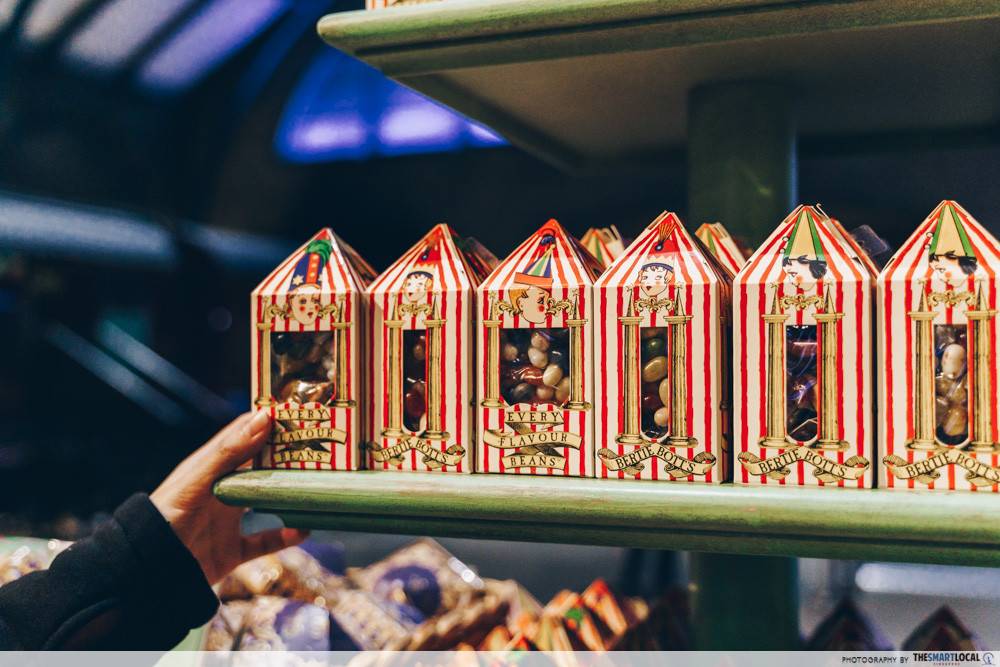 End the Studio Tour with a visit to the Gift Shop – it’s best to set a budget for yourself before entering, else, you’ll end up with an unnecessary stash of wands, robes, and house scarves. While we picked up some HP-branded merch, like Bertie Bott’s Every Flavour Beans, we were conscious that most of the products are awesome but purely coveted for its novelty factor. 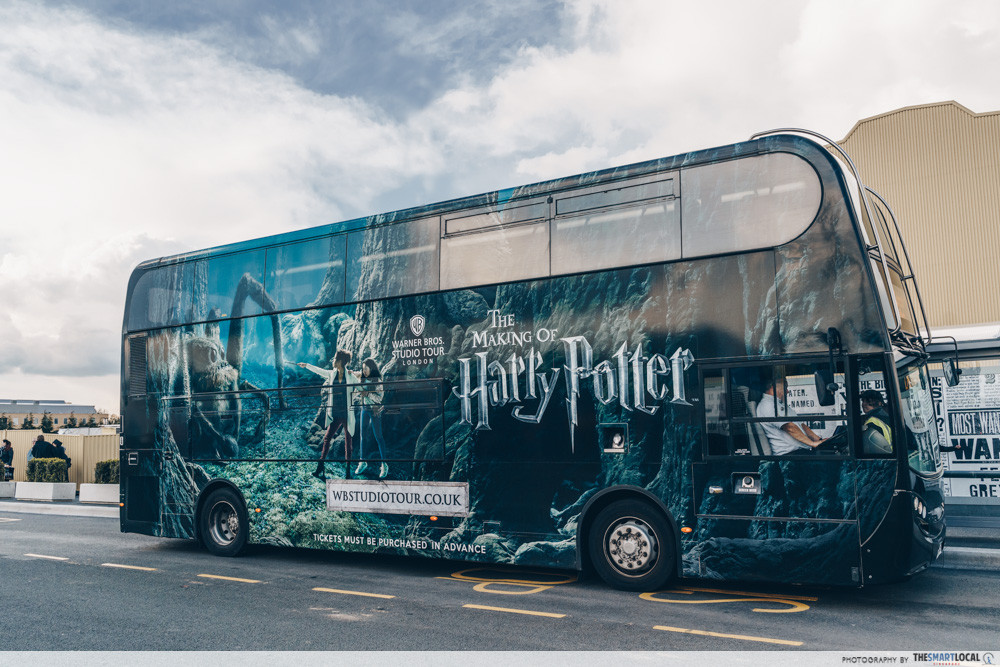 There’s also no need to rush through the Studio Tour since it’s all OTOT – we’re not bound to a fixed schedule and can leisurely wander through each iconic movie set. Whether you need a full day to explore or you’ve only got 3 hours to spare , you can head back anytime.

Here is a comprehensive look at London’s Harry Potter Studio Tour, which includes new attractions such as a fire breathing dragon in Gringotts Bank as well as interactive duelling sessions. Experience the magic for yourself now http://bit.ly/tslxklookhpstudiotour Read more here: /read/harry-potter-studio-tour

Posted by TheSmartLocal.com on Monday, 29 April 2019

While the activity is confirmed through Klook within 24 hours, you’ll need to pick up your round-trip train tickets from any national rail station. The Klook voucher will be sent through by email once confirmed – simply flash it to redeem the train tickets. Once you’re at Watford Junction, take the complimentary shuttle bus to the Studio and voila – it’s easy as that.

You’ll be way ahead of those in the snaking queues of the ticket counter too!

You can also save up to $100 off your next getaway with Klook! Use these codes:

This post was brought to you by Klook.
Photo credit: WenLin Tan.

#KLOOK #Things to do London 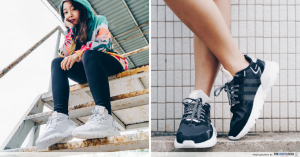 7 Sneaker Styling Tips So You Can Wear Them 24/7, As Shared By Streetwear Gurus
7 Mother's Day Restaurants In Singapore With Deals, Freebies & Gifts To Score Points With... 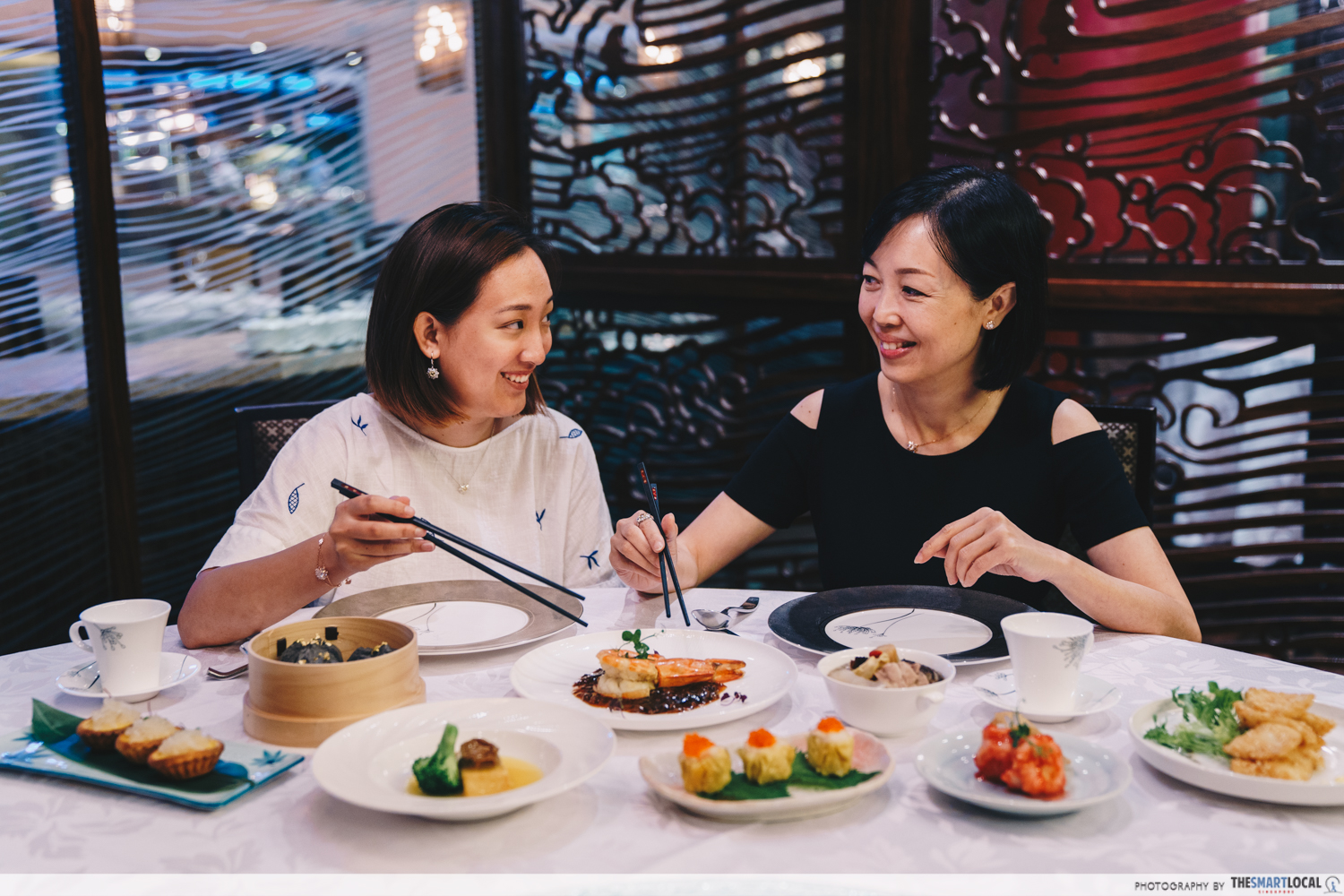