The Passion Behind The Tradition

At times, it seems like Singaporeans are just a bunch of fancy office workers. When all we see are soaring skyscrapers and hurried businessmen rushing from place to place, it’s hard to remember that Singapore is so much more than our glitzy CBD.

There’s the important portion of our society that remains largely unsung – the people behind the vanishing trades of Singapore, who are working hard in the name of passion and preserving our heritage. We ran around Singapore to find 10 of these tradesmen and tradeswomen, who are still braving the odds in our highly competitive environment and holding on tight to their craft. 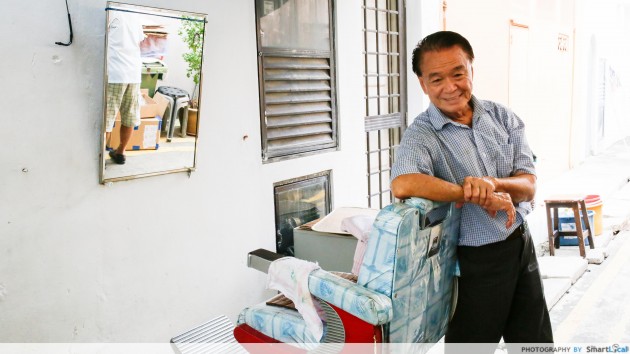 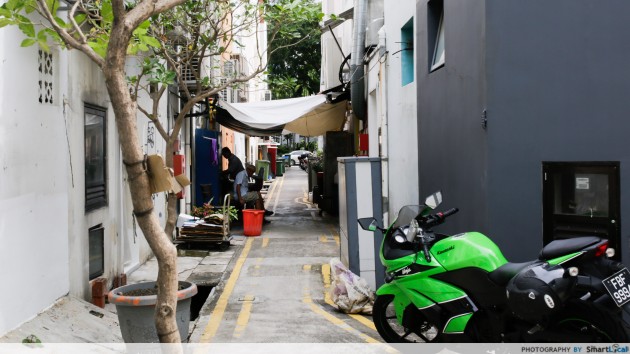 Mr Lee Yong Tong is among the handful of roadside barbers left on our streets, and also one of the friendliest uncles I’ve met. With a warm smile, he beckoned us over to his makeshift salon where we shared a lovely conversation about anything from his trade to the European holiday he had with his daughter.

Mr Lee has been in the trade for more than 50 years, and it has turned into a passion for him and a way to pass his golden years happily. He receives about 5 customers a day, and occasionally welcomes the inquisitive tourist. Each haircut costs $6, and this can include the trimming of eyebrows and facial hair.

If you’re ever in the area, feel free to pay a little visit to Mr Lee, whether for a haircut or a nice little chat. 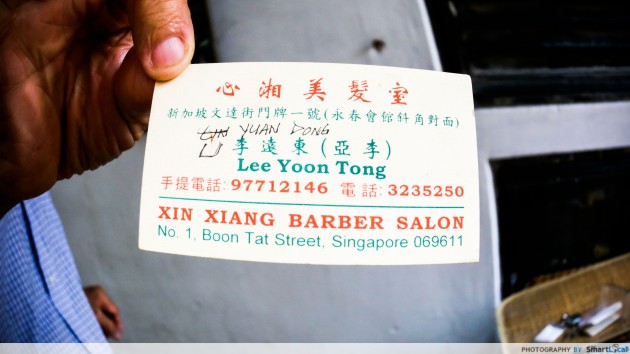 His shop can be found in the back alley near the cross junction of Boon Tat Street and Telok Ayer Street. 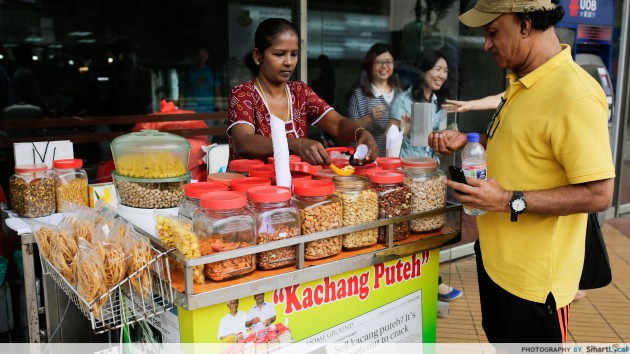 Development in Singapore has happened so rapidly, many of us don’t even realise how nearly all the kacang puteh peddlers have disappeared.

During its heyday in the 60s-80s, there were kacang puteh sellers galore and they were found mostly outside schools and cinemas. Even us 90s kids would probably remember being able to buy these paper cones of nutty goodness almost anywhere. Today, the only stall known to most of us is the one operating outside Peace Centre. It belongs to 72-year-old Mr Nagappan Arumugam, but his son and daughter help to run the business.

When I was there, business seemed to be doing fairly well with passers-by stopping to get a cone once every few minutes. But with rising rental costs and competition from the likes of Camel and Tong Garden, the future of kacang puteh in Singapore remains uncertain. 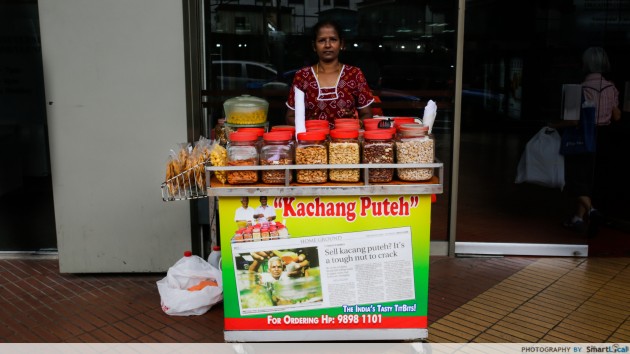 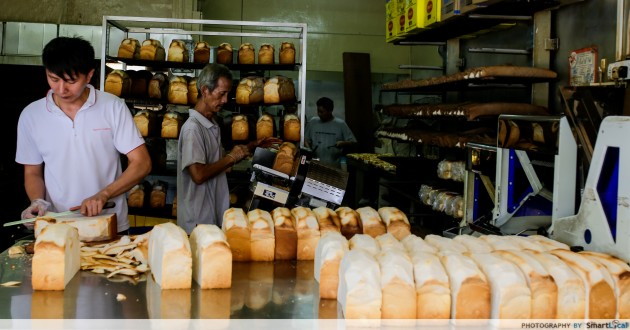 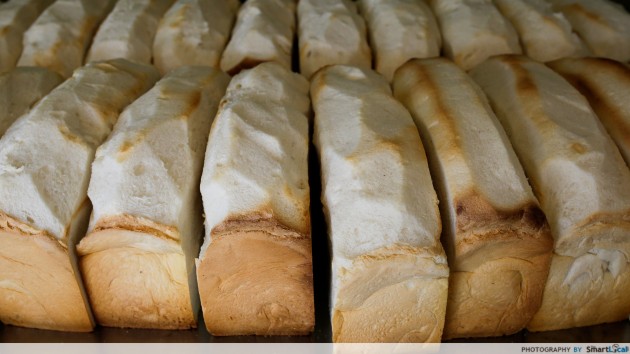 This brings back sweet, sweet memories of coffee shop breakfasts with Ah Gong as a little kid. I’d steal a sip of his kopi before taking a bite into a huge piece of soft, fluffy white bread with kaya. Gardenia soon took over my breakfast plates, and the delicious taste of Nanyang bread would’ve been forever forgotten to me had I not set out on my hunt for dying trades.

Sing Hon Loong Bakery, also known as Ghee Leong, is one of the few remaining traditional bakeries in Singapore where bread is being handmade from scratch. In the 1970s, there used to be more than 200 such bakeries. Today, the number can be counted with my fingers.

The baking process is long and tedious – dough is manually rolled out and kneaded before being popped into a large traditional oven, and the charred crust is then sliced to reveal the fluffy white goodness within. At Sing Hon Loong, this goes on till nearly 1,400 loaves are being produced daily!

If you ever pop by for a visit, you won’t be able to resist the enticing, crustless Nanyang bread. 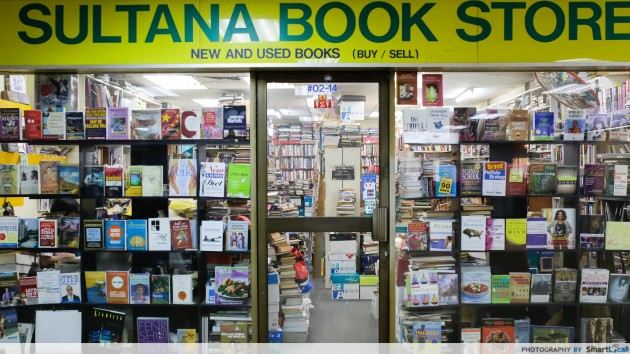 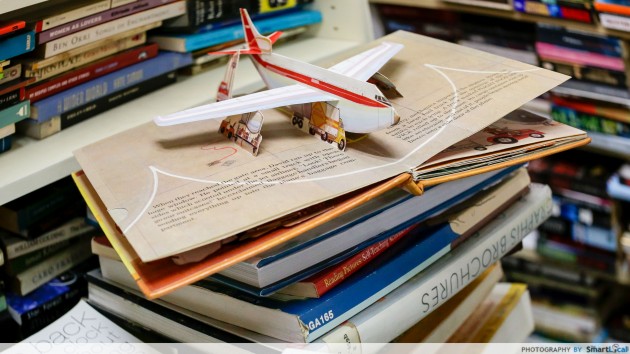 I adored this place. The bookworm in me was squealing in delight as ran I my fingers through the endless shelves of books. There are only a couple of such secondhand bookstores left on our shores, and they remain treasured gems every book-lover has to frequent.

Mr Kwok, the owner of Sultana Book Store, is so passionate about books and gaining knowledge. You can have a nice little chat with him about anything from the American Revolution to Lee Kuan Yew’s favourite fantasy book, the Don Quixote.

The bookstore is one of the many that used to be in the 2-storey shophouses along Bras Basah Road. After the demolition in 1980, those who could afford it moved to the current Brash Basah Complex, but many were forced to shut down.

With the confluence of e-books, mega bookstores, and rising rent, the possibility that such treasures may disappear completely is a scary thought. We can only hope that our love for the printed book will never die, and that it’ll be enough to keep these stores going. 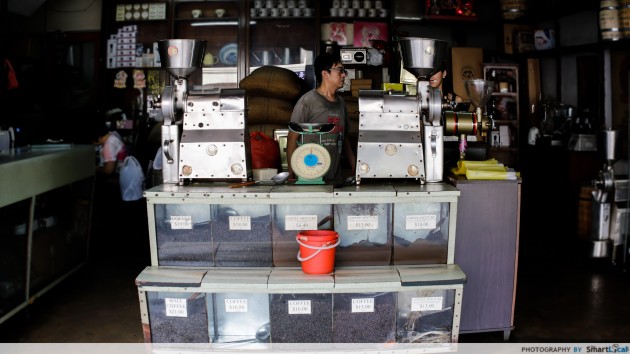 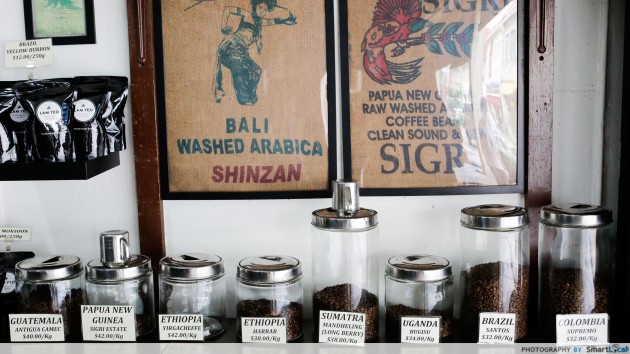 With scores of huge international coffee franchises and hipster cafes dominating the market, traditional coffee powder grinders such as Lam Yho are jewels. They are among the few remaining shops roasting and grinding coffee beans the traditional Singaporean way.

Mr Tan Peck Hoe is currently the third-generation owner of Lam Yho. His grandfather started the business in 1959, and nothing much has changed since. Its vintage charm is so authentic and unpretentious, and the shop even keeps its original door from 56 years ago!

Mr Tan says there are challenges faced such as rising costs and changing tastes and preferences of customers. To keep up, he’s diversified the business by importing gourmet coffee beans from all over the world, while still placing emphasis on their 10 signature classic blends that are said to be super flavourful and aromatic.

Maybe it’s time we put that cup of Starbucks down and acquaint ourselves with some old-style Singaporean coffee. 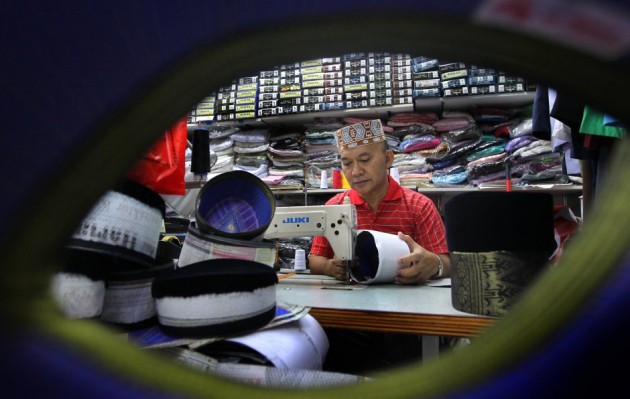 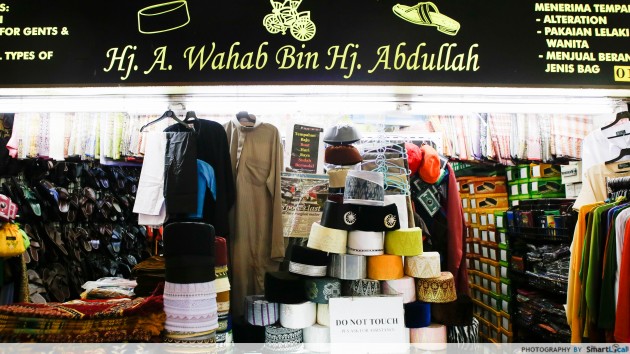 Mr Abdul Wahab Abdullah is the last full-time songkok maker in Singapore. He’s been in the business of making and selling the songkok, a traditional headdress worn mostly by Muslim males, for 33 years. He started learning how to make songkoks from his father at the age of 7, and he opened his first shop at the old Geylang Serai Market when he was 22.

The art of songkok making is a tedious process that requires hours of accurate measuring and patient sewing. The trade’s high degree of labour intensity and competition from cheap imports render songkok making an unpopular profession among young Singaporeans.

With such knowledge, it was comforting to learn that Mr Abdul Wahab’s children are currently learning the trade. The only way our culture may live on is if the young are passionate and willing to preserve it. 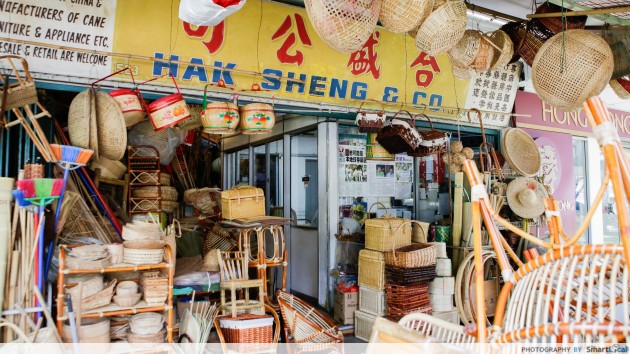 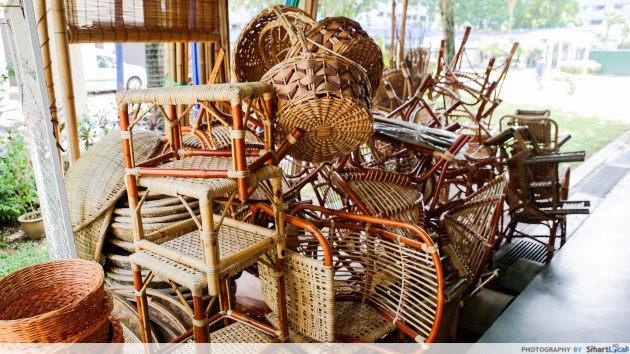 The founder of rattan and bamboo company Hak Sheng & Co is believed to be the last rattan weaver in Singapore.

Mr Goh Kiok Seng started the company in 1969 in Lavender Street, and moved to its current location in Kallang Bahru in 1977. During the trade’s glory days in the 70s, business was flourishing due to the constant need for cheap and durable rattan products.

Today, many products have been replaced by cheaper plastic materials and modern machinery. When Mr Goh’s son took over the business in 1994, he worked to diversify it by bringing in cheaper imports from overseas. While rattan weaving has been rendered impractical over the years, the store has yet to lose its nostalgic charm. Rattan police shields, wedding baskets and food trays of yesteryear continue to adorn the shop, upholding the memory of simpler times. 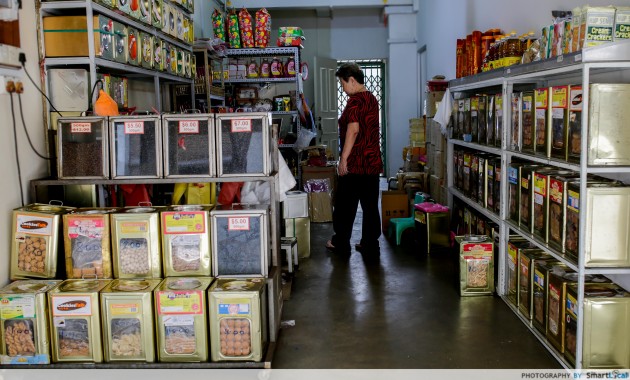 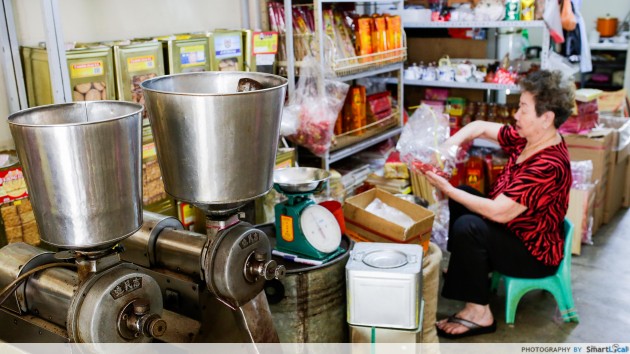 Provision shops like these with their multitude of tin biscuits hit you right in the childhood. They bring back so many happy memories of primary school days spent running around HDB blocks with friends and munching on huge bags of colourful iced gems.

I got to relive those memories the day I stumbled upon Mdm Tan’s little shop in Whampoa Drive. She’s such a lovely lady selling a really unique mix of stuff, from childhood biscuits to coffee powder to anything you’ll need for a Taoist ritual.

There are still old-school provision shops aplenty in our heartlands, but with competition from mega super marts and our youth becoming increasingly skilled and educated, we can only hope that these shops will continue bringing joy to the childhoods of many generations to come. 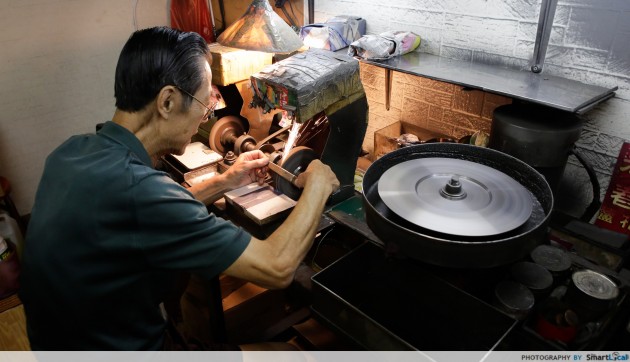 Mr Cheng Siang Hwa is one of the three remaining blade sharpeners in Singapore, and also my grand-uncle. Mr Cheng took over the shop from his uncle in 1964, though the process was not without trial and pain. He endured years of abuse from his uncle, but he pulled through and was rewarded with a highly profitable skill in those times. 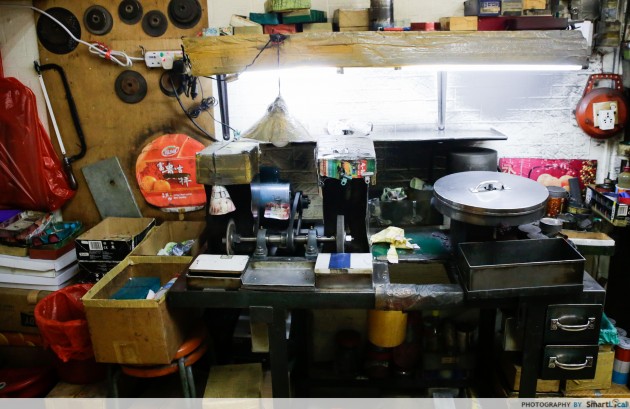 Mr Cheng has been running the shop with his wife, my grand-aunt, ever since. His blade sharpening services cost $12, and most of his regular customers are barbers looking to repair and sharpen their tools. Other than blade sharpening, Mr Cheng also sells a whole range of grooming products, some of which he carved and made from scratch.

Mr Cheng says that the biggest challenge to his trade was the sudden and very rapid influx of cheap China imports. People simply bought new products when their blades worn out, and his services soon became increasingly unprofitable.

While we have to embrace globalisation and changing times, it’s always sad to see part of our culture and tradition being compromised. 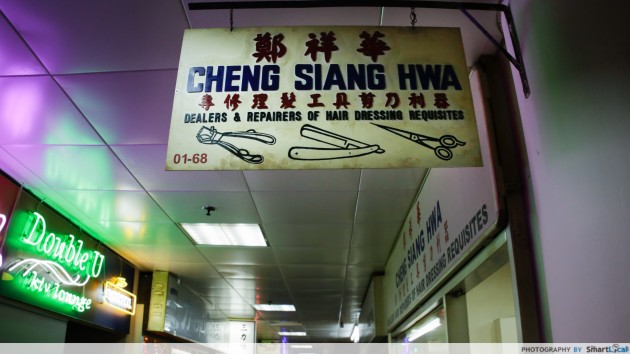 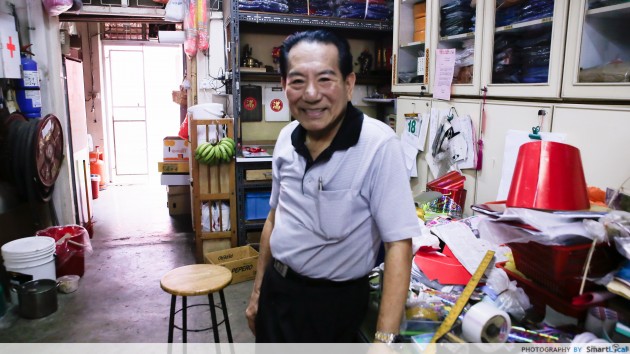 Mr Yeo Hung Teo is the last traditional lantern painter in Singapore who paints Chinese images and motifs. He says that there are still quite a number of people painting Chinese characters, but he’s the only one painting those grand dragons, fierce tigers and colourful flowers that truly give the lanterns character. The lanterns are mostly used as offerings during the Chinese festivals, especially the Hungry Ghost Festival.

Mr Yeo studied art, but left school when school fees became too much of a financial burden. He joined the company his late father founded, Yeo Swee Huat Paper Agency, and refined his skills along the way till he eventually took over.

Today, business remains brisk during festival season and there are also the occasional orders from overseas. Mr Yeo was happy to share about a Frenchman who admired so his work that he ordered another lantern to be shipped over to France! 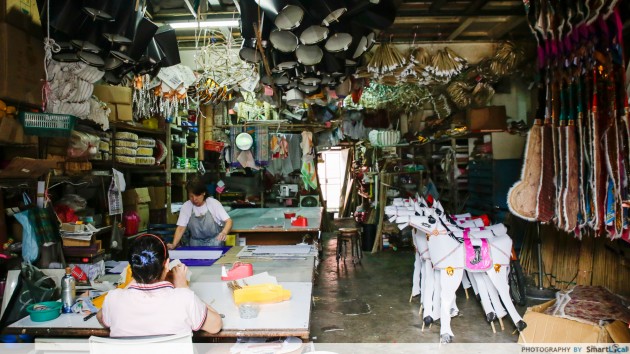 The lantern making process is one that’s extremely tedious and requires so much passion and patience. Mr Yeo has had two disciples, but both gave up halfway due to the sheer intensity of the practice and work. While Mr Yeo’s passion for his craft continues to burn, it’s just unfortunate that not many youths can look past the labour-intensive work to embrace the same love for traditional lantern painting.

Keeping Up With Times

Times change. As such, people have to keep adapting to keep up with globalisation and development too. It’s disheartening to know that some of these traditional trades will soon be rendered obsolete in the face of modernity, but there’s always an underlying hope that some sort of balance can be achieved. By diversifying and taking advantage of cheaper imports, it is possible for traditional trades to survive in this competitive climate.

If you know of any more vanishing trades in Singapore, do share them with us in the comments below!