The Greatest “Rooftop” Pictures In The World

While some of us are happy with the our lives the way they are, others constantly push boundaries and defy convention.

Whether it’s purely out of passion or simply to challenge themselves, these extreme artistes listed here stop at nothing to achieve their goal. Even if it means scaling to the top of the tallest buildings in the world illegally. The result? Some breathtaking views and plenty of other tingling feelings in my limbs.

It’s amazing how pixels on a computer screen can trigger millions of reactions in your body. Here are 14 insane pictures that will make your palms sweat and your heart skip two beats. But a word of caution: please don’t try this on your own! 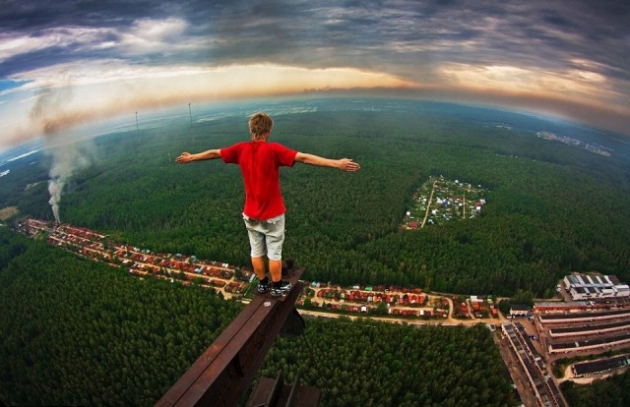 It’s in Russia and Ukraine where most of these daredevils originate from. Analysts say most of these kids come from poor families and they started doing this because they had ‘nothing to lose’.

After Russian student Marat Dupri got his Canon camera 18 months ago, he began climbing onto roofs of houses to capture scenic views from above. Soon, he began climbing to the top of buildings to challenge himself to greater heights.

He simply gets an adrenaline rush from capturing images at such heights. 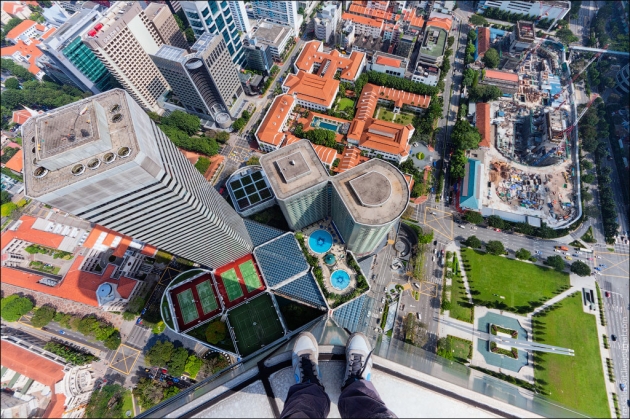 Vitaliy Raskalov is one of the most famous ‘roof toppers’ in the world, reaching world-wide fame when he posted himself climbing The Shanghai Tower barehanded (posted below). He enjoys an instagram following of 150k.

Like most of the daredevils here, he is a photography enthusiast who captures stunning photographs at these heights. In his blog about his trip to Singapore, you can actually see his beautiful gallery of Singapore which also features photographs taken at ordinary levels. He also documented his travels in his post, which was shared over 3,000 times by his Russian fans. He admitted illegally accessing the Swissôtel rooftop to take this picture.

Another Korean group also made news recently by breakdancing on the rooftop of Swissôtel for an LG ad. Guess what LG phones have to do with the Swissôtel? That’s right. Nothing. If you couldn’t manage the trust fall back in school, this picture will put you to shame. This daredevil takes trust to another level. I don’t dare imagine what will happen if his friend decides to go weak in any of his limbs.

The friend in this picture is probably Mustang Wanted himself, known as the world’s most notorious “rooftopper”. He has pulled of the craziest stunts and actually invited UK roof topper James Kingston to fly to the Ukraine to first do this stunt with him. Here’s the infamous compilation of Mustang Wanted’s exploits. James Kingston shot to infamy in the UK when he illegally sneaked into a construction site and filmed himself hanging from one hand. He filmed the “Don’t Look Down” documentary with the UK’s Channel 4. You’ll be able to see the amount of preparation and self-awareness he has of the situations he puts himself in. Many of these guys are more of modern day daredevils rather than “reckless idiots”. It also follows him across the world to the Ukraine where he meets Mustang Wanted for the first time, who invited him to pull off the “trust-hold” stunt that we featured above. You can check out the video of his epic crane climb filmed in first person perspective here. 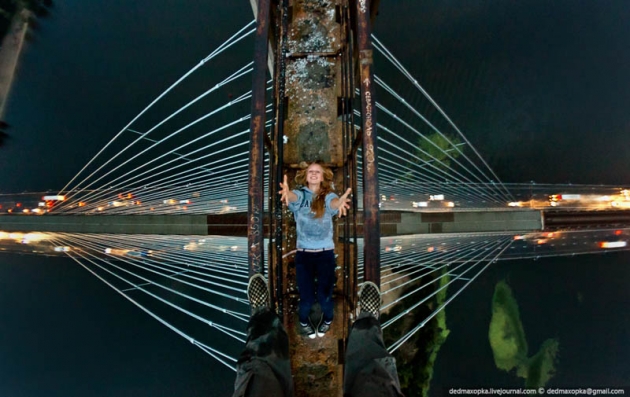 Death-defying photographer Vadim Makhorov likes scaling some of the tallest skyscrapers in parts of Russia. While he’s at it, he captures some of the most breathtaking aerial landscapes of the tall structures he scales. This picture is taken atop the South Bridge in Kiev, overlooking the traffic as well as the deep blue sea. 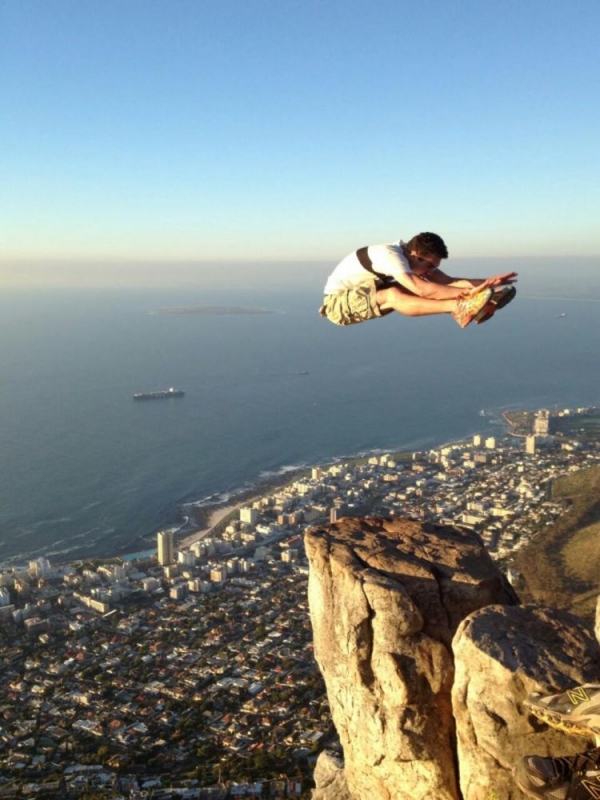 At some angles, this man looks like he’s been sent a flying kick. But if it’s any consolation, the daredevil is attempting a flying kick jump shot at 6,693ft above sea-level. To me, both are scary all the same. Previously an acrophobe, photographer Neil Ta managed to conquer his fear of heights with his love for “rooftopping”. He describes himself as an urban explorer who has gotten so accustomed to rooftopping that sometimes he doesn’t take his camera along when he embarks on such climbs. 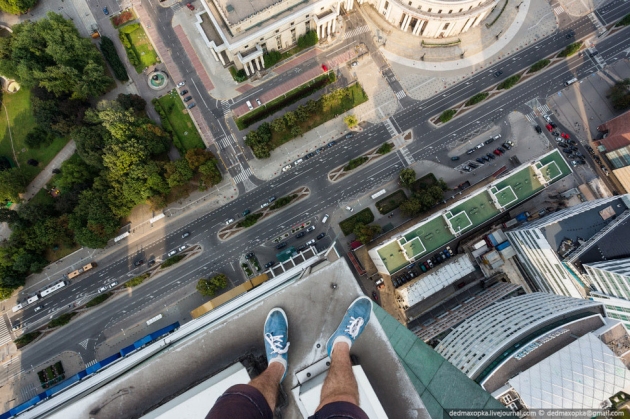 Photographer Vadim Mahora looks down as he stands 115.7 metres above ground on top of Warsaw City Centre, Poland. Just one step off balance and he could plummet right down to the ground. 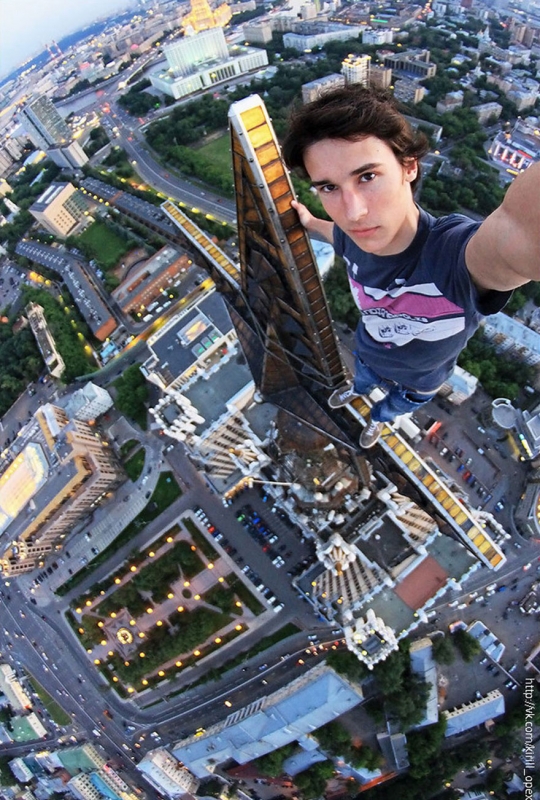 Daredevil Kirill Oreshkin first started scaling buildings as a hobby about 6 years ago. Since then, he has captured plenty of vertigo-inducing photographs while atop some of Russia’s tallest structures and earned the nickname “Russian Spiderman” for himself. While this is an amazing view of Moscow, I’m not sure how he does it with a straight face like that. 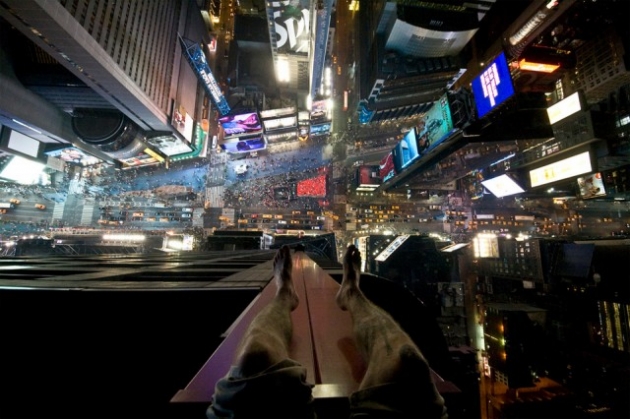 Knowing that the 38-metre statue was under repairs ever since it got struck by lightning early this year, Lee saw it as a photography. After his (insanely dangerous) request got approved by the Brazilian Tourism Board, Lee found his way up to the top of the statue and snapped his version of an epic selfie with Jesus. Some people do it by choice while for others, it’s part of their jobs. Two repairmen climb 1,250 feet to fix the antenna on top of the Empire State Building in New York. What’s scarier is photographer Vincent Laforet, who is perched above them, is without any safety harness. 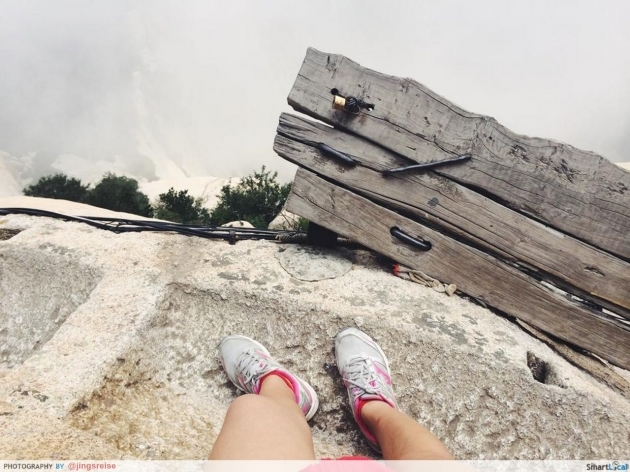 Our very own writers, Noelle and Jingyi, took on the death trail earlier this year at Mount Huashan, Xi’an, China. Standing at 2,154m, Mount Huashan is known as the “most dangerous hiking trail in the world” no thanks to its narrow wooden walking paths. During summer, hikes have to deal with overcrowding as both locals and tourists alike make a pilgrimage to the Taoist temples at the end of the trail. In the past few years, Jun Ahn has been pushing her boundaries and taking self-portraits at some of the world’s tallest buildings in Seoul, Hong Kong and New York. Here, her picture overlooks the busiest street of Seoul. While her images may make acrophobics squeal in fear, she maintains that her photographs are not meant to show her being fearless but more to satisfy her fantasy for the future. 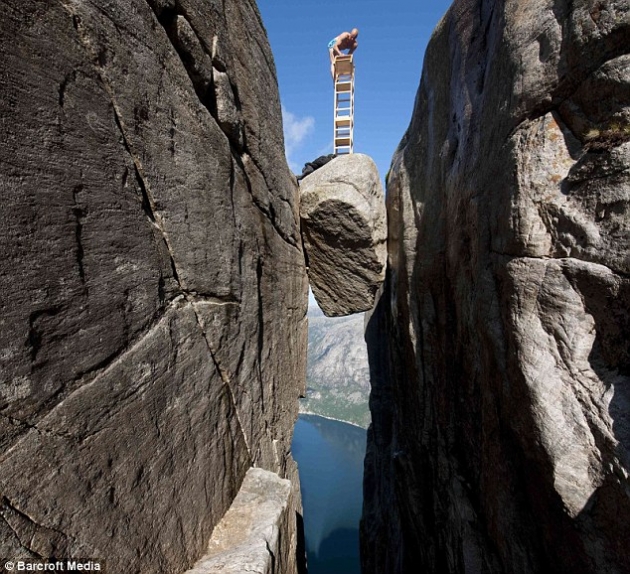 As if standing on this precariously-wedged boulder is not exhilarating enough, extreme artist Eskil takes it up a notch by standing atop a stack of chairs on the boulder about 1,000 metres above sea-level in Rogaland, Norway. 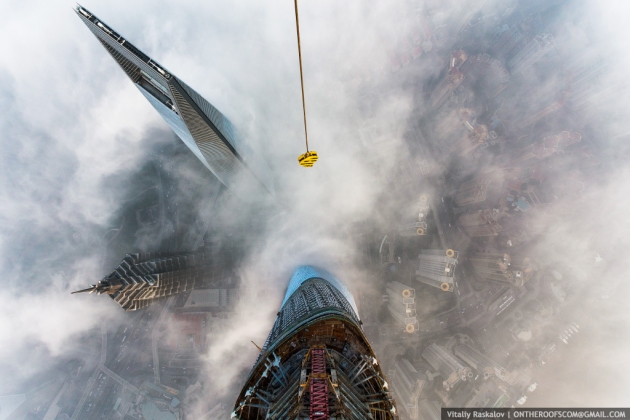 The building you see at the top-right is the Shanghai World Financial Tower which stands at 490 metres (1,614.2 feet). What that means is photographer Vitaliy (mentioned earlier) and his friend, Vadim, are on a higher altitude as they capture this image. That’s right, they’re perched at slightly less than 600 metres (2,000 feet) above ground on the nearly completed Shanghai Tower.

And if you’re guessing that the thick fog you see are clouds, you are absolutely correct.

You Only Live Once

While I’m no acrophobe, looking at those pictures did make me gasp inside as I distracted myself from imagining the worst. This is one of times where life is best experienced living vicariously through others. These pictures may look amazing but these situations these daredevils put themselves in are still incredibly dangerous. You should never be tempted to try this on your own.

Did these pictures make your heart skip a beat or two? Let us know in the comments below.