Around the world exhibit at Changi Airport

Whether you’ve planned a holiday yourself or were just one of those kids who successfully managed to convince their parents to travel beyond the shores of Malaysia, you can probably remember making comparisons like Budget air vs regular flights and Europe vs Asia.

While it looks like we’ll have to put our wanderlust on pause even longer, don’t feel disheartened.  From the sandy beaches of Australia to the colourful streets of Sweden, you can now immerse yourself in some holiday vibes at Changi Airport’s Around The World exhibit, featuring iconic scenes from some of our fave destinations. 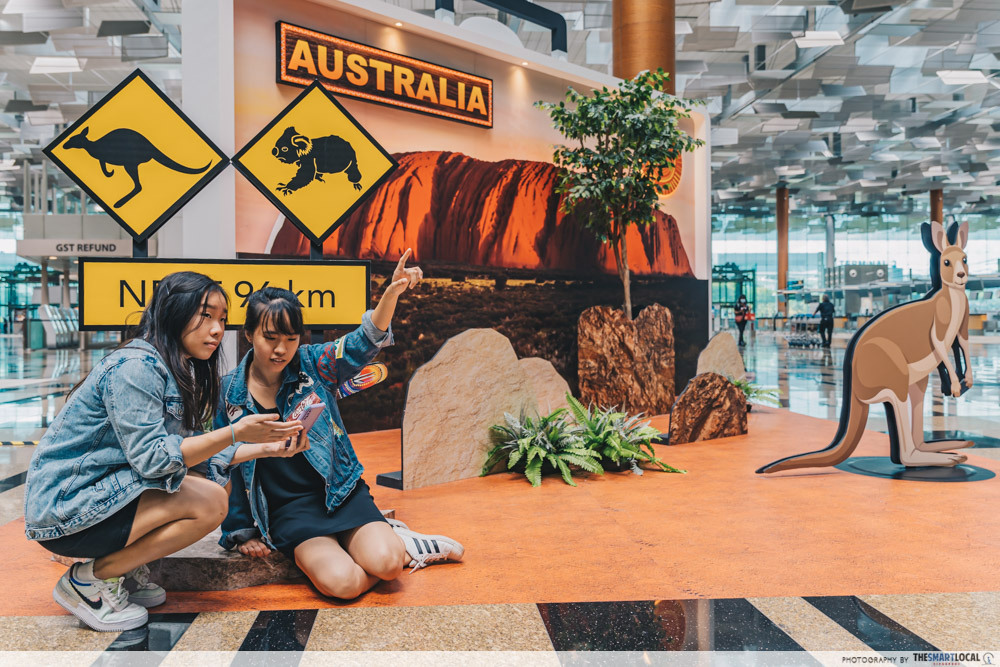 Take a road trip – on foot, of course – to the
Australian Outback and expect to be greeted by the lovely sunset hues of the outback’s red sandstone formation. While the kangaroo cutout is far from the real deal, the yellow distance signage still makes a great spot for you to strike your best “I’m such an adventurer” pose. 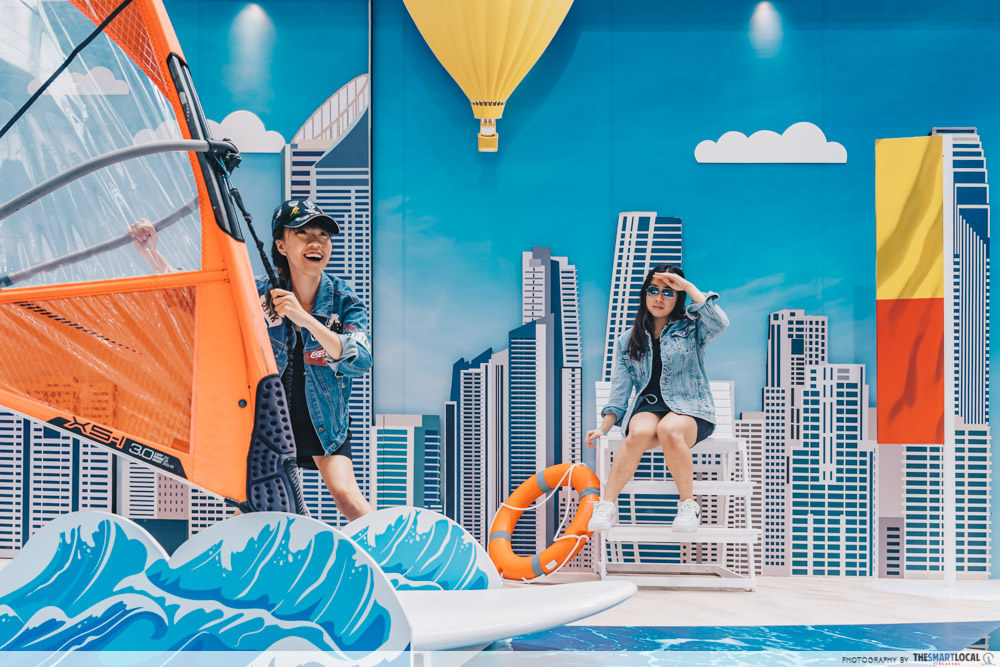 If you’ve ever thought about how cool it is to windsurf or be a lifeguard like Zac Efron in Baywatch, you can now get the chance to fake it till you make it. Simply walk behind the outback setup to enter a mini replica of Gold Coast’s Surfers Paradise.

Grab a friend, bring some shades and prop yourself up on the lifeguard chair or surfboard to get a cool picture against the beautiful azure backdrop. 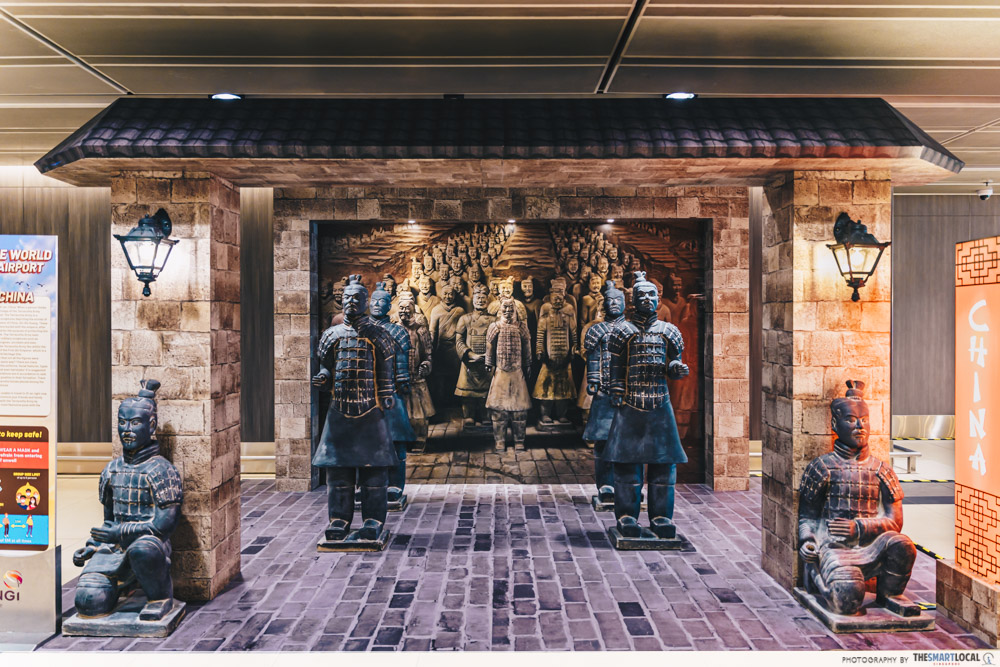 China has one of the oldest and richest histories in the world with over 3,500 years of written accounts. Even if you’ve thrown everything you’ve learnt in Social Studies or China Studies back at your teacher, the famous Terracotta Army will surely ring a bell. 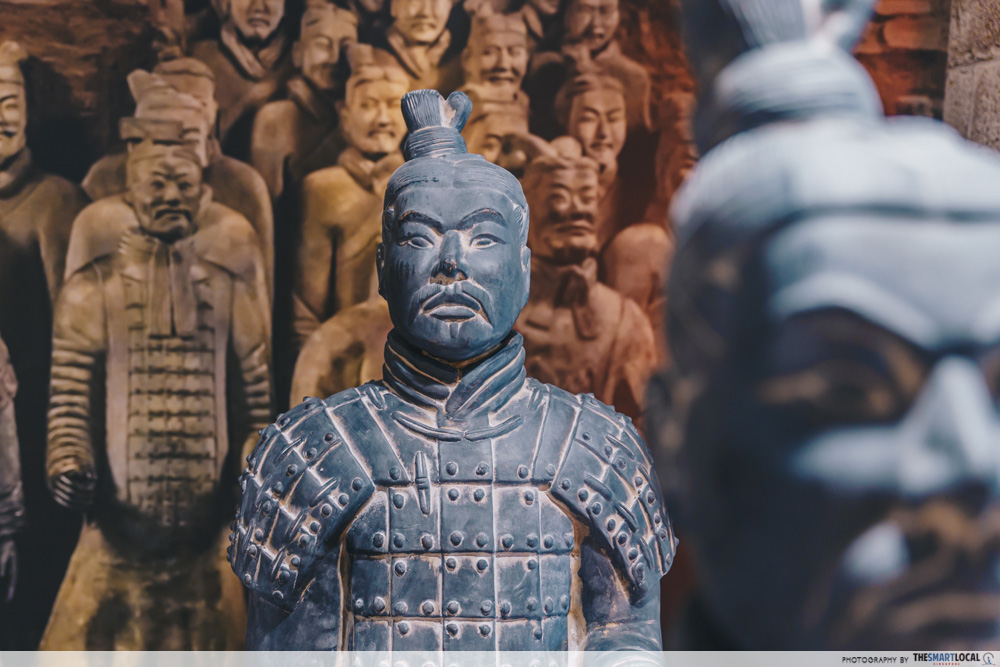 These statues were built with the purpose of protecting China’s first unified dynasty emperor Qin Shi Huang in his afterlife.

While the original Terracotta Army remains in Xi’an, China, Changi Airport has a remarkably similar life-sized replica of these intimidating figures. 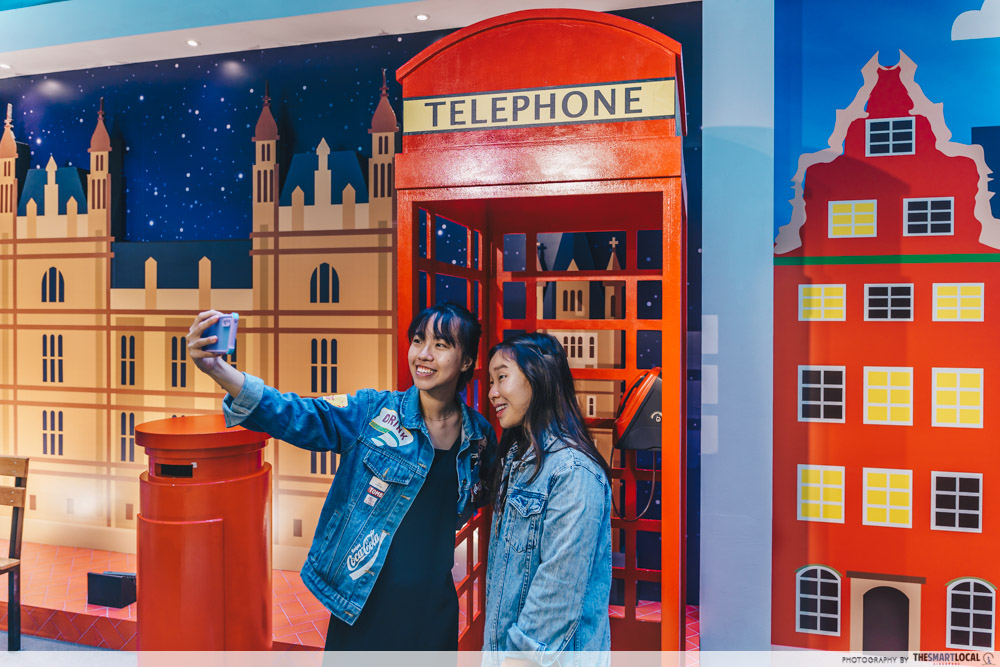 If you’ve been to London but have never taken a picture with the iconic red telephone booth, can you really say you’ve been there? Whether you missed the opportunity to snap a selfie or just never got the chance to go to London, you can now try to bluff your friends and family that you have instead. Sweden’s colourful buildings are right next to the London exhibit.

While our dreams of travelling around Europe on cheap budget airlines are dashed at the moment, getting to Sweden has never been easier. Simply pop next door to the Sweden set-up for a stroll past its colourful buildings. 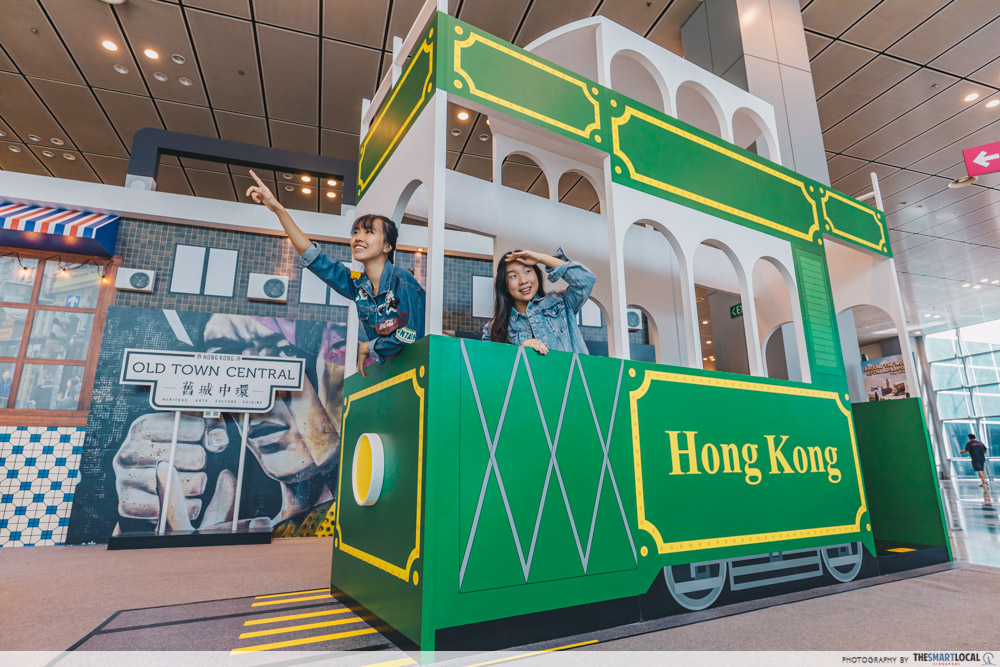 I’ve lost count of how many times the Singapore and Hong Kong travel bubble was delayed, but what matters now is that it’s been scrapped.  Nevertheless, you can still enjoy a semblance of this vibrant city here in our backyard. 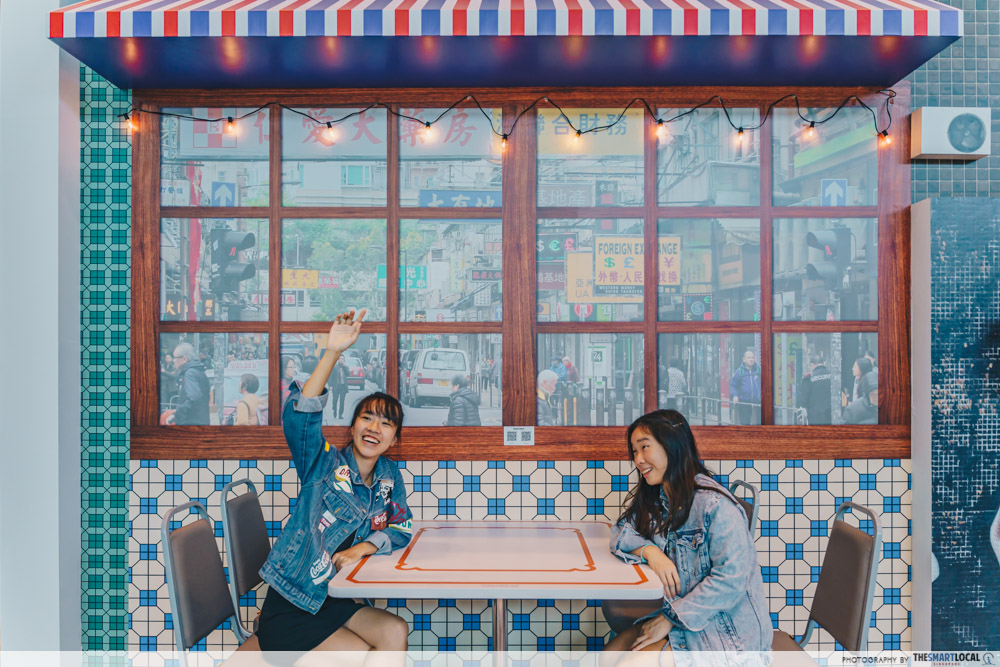 Hop on the Ding Ding Tram as you take in the sights around you: a giant graffiti wall featuring Bruce Lee, quintessential neon Hong Kong Street signs and a classic Cha Chaan Teng set-up. Don’t forget to snap a pic with the giant egg tart and milk tea before you leave. 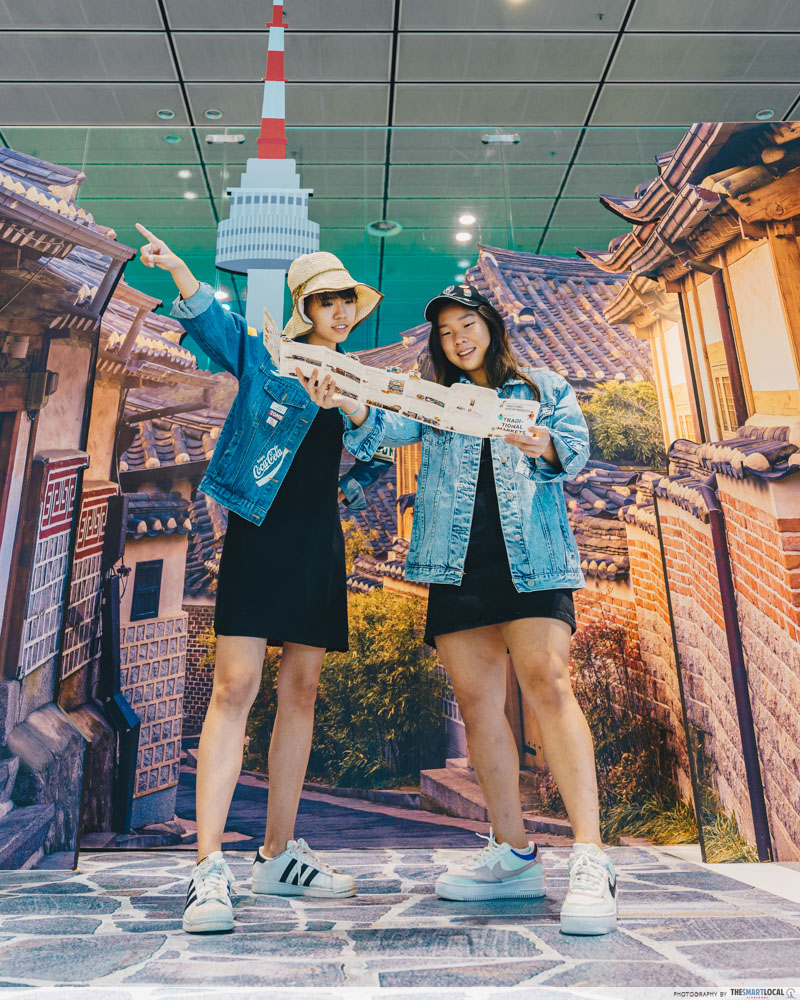 Capturing the essence of South Korean architecture with stone pavements, tiled roofs and N Seoul Tower in the distance, this photo spot featuring Bukchon Hanok Village is perfect for you to reenact your favourite K-Drama scenes.

Alternatively, put on your most touristy hat and drag your bestie in for a candid picture. We may or may not have grabbed a random flyer and pretended like it was a tourist map for this photo. 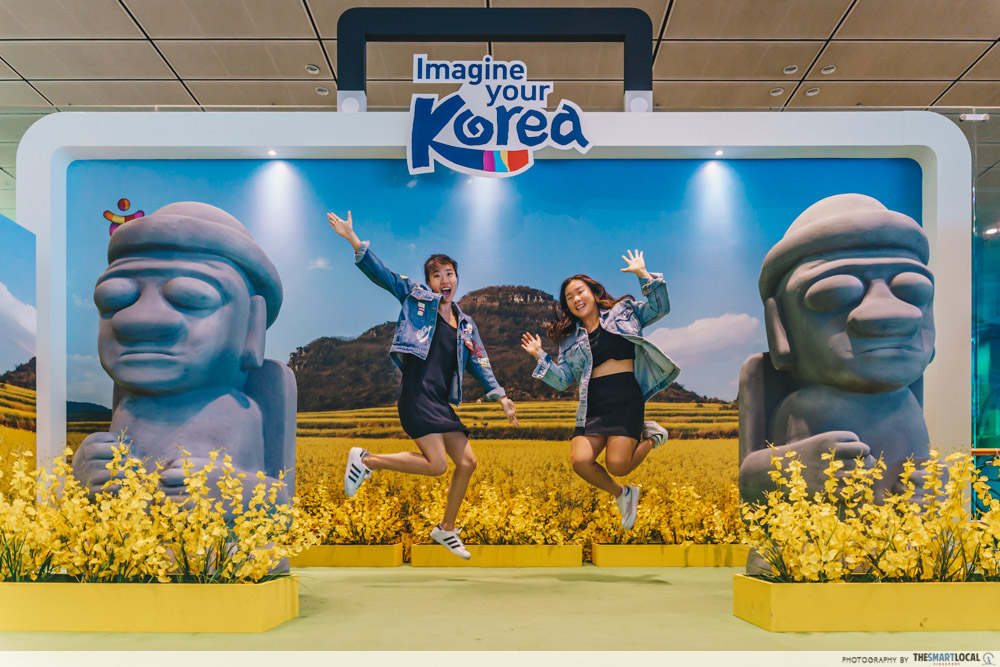 Wander next door and you’ll be greeted by gorgeous Jeju scenery and two Dol Haeubangs – large rock statues found on Jeju Island. The bright natural light filtering into this exhibit area lightened our moods as we casually self-initiated a mini photoshoot. You can also relive what it’s like being inside a pocha (a tent bar serving cheap street food) as you take in the Korean dishes on display. Although made of wax and plastic, some of the food items looked so legit, I swear our bellies growled a little. 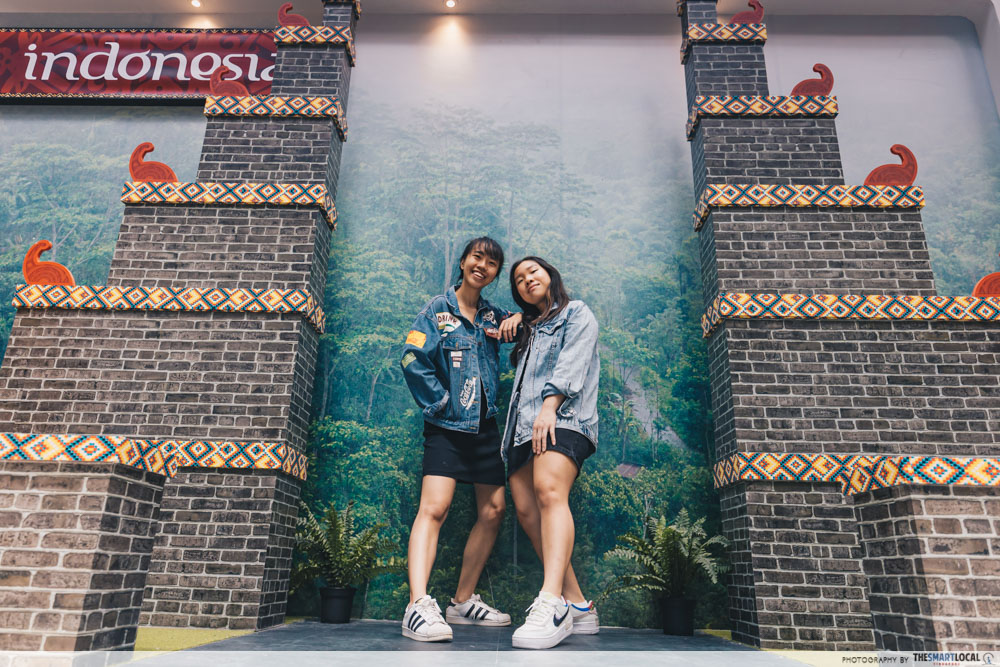 Aside from being IG-worthy, the iconic Bali Handara Gate actually represents one passing from the secular world into a sacred space – usually temples – in Balinese Hindu culture.

While you can’t pass through the gate here, you should definitely not let this photo opportunity pass you by. Equally interesting, the other side of this Indonesian display features unique conical-shaped huts found in the traditional Wae Rebo Village, which was founded over 100 years ago.

Fun fact: The Manggarai people living in this village have been here for 18 generations. 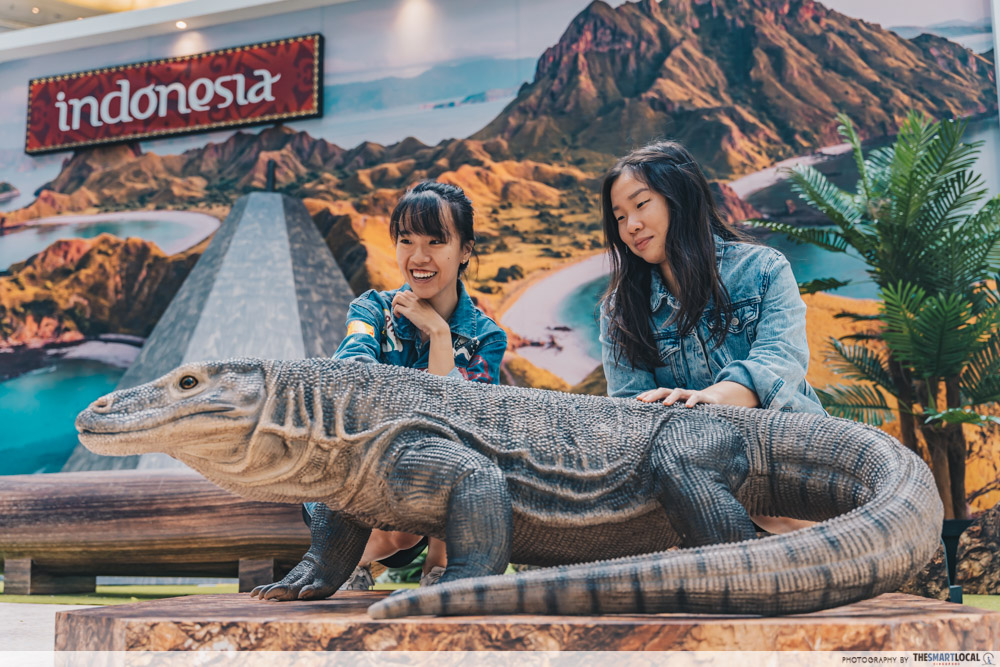 There is also an eerily real-looking Komodo dragon here. The statue is detailedly crafted down to the last tiny scale – if this wasn’t Changi Airport, I would’ve been scared out of my wits.

Going abroad on a holiday feels like a distant memory and with the new one-month restrictions just announced, travelling just doesn’t seem feasible in the immediate future.

Whether you’re itching to travel or happen to be in the vicinity of Changi Airport, this travel-themed exhibit is worth a visit. Perhaps it’ll even bring up some fond memories. Not to mention, it’s way cheaper than travelling with its $0 price tag – a.k.a. free entry.

Changi Airport’s Around The World exhibit will only be up from now till 10th October 2021 so do make a trip down here before it’s gone.

For more attractions to visit, check out: 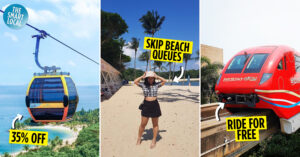