My breastfeeding journey as a working mother of 2

Even before my first daughter was born, I was called to the breastfeeding life like Moana was called to the ocean. There was something undeniably beautiful about being able to nourish my youngling with my body, and not a tin off the shelf of a supermarket.

Don’t get me wrong, I believe that fed is best, but after reading 101 articles about the magical properties of breast milk, I was obsessed. But after just two quick months back in the office, I’d run out of bottled breast milk and had to buy formula to keep my baby sated.

With my second child, I was determined not to make the same mistakes. Here’s how I’ve finally mastered pumping and maintaining my milk supply as a busy working mum of a toddler and an infant.

After rewinding the tape to find out what went wrong with my firstborn, I landed on these reasons:

1. Using the wrong breast pump with my firstborn

I first started out with Pump A, a hand-me-down hospital grade pump. And while it expressed my milk just fine, the pump itself was too bulky for me to use anywhere outside the house, and I had to be stationed in one place for the whole duration of the pump, rendering me near useless whenever I had to pump milk.

In a bid to save money, I bought Pump B online for $30. Big mistake – this budget pump, while portable and small, was loud and did a poor job expressing my milk. It was this penny-wise-pound-foolish move that led to the eventual demise of my supply, and a year of forking out $50/week on formula milk.

With my second child, I splurged on Pump C – a branded pump with rave reviews. It was both small and aesthetic in design, but the tedious assembly and sterilising of the many small parts soon left me fatigued and lazy to pump on the regular.

2. Busy schedule and lack of nursing rooms in the office

To make matters worse, the lack of a dedicated nursing room in my office and my packed schedule made pumping at my desk an awkward affair. People would come over to discuss an issue, and many a time, I’d be visibly hooked up to my pump with tubes sticking out from under my nursing cover.

Embarrassment aside, even if I’d managed to set up my pump under my nursing cover in secret, the rhythmic chugging of my pump only drew stares and the innocent, but dreaded question “do you hear that sound?” It was safe to say my pumping journey wasn’t going as well as I’d hoped the second time around, and my supply of frozen milk was depleting fast. 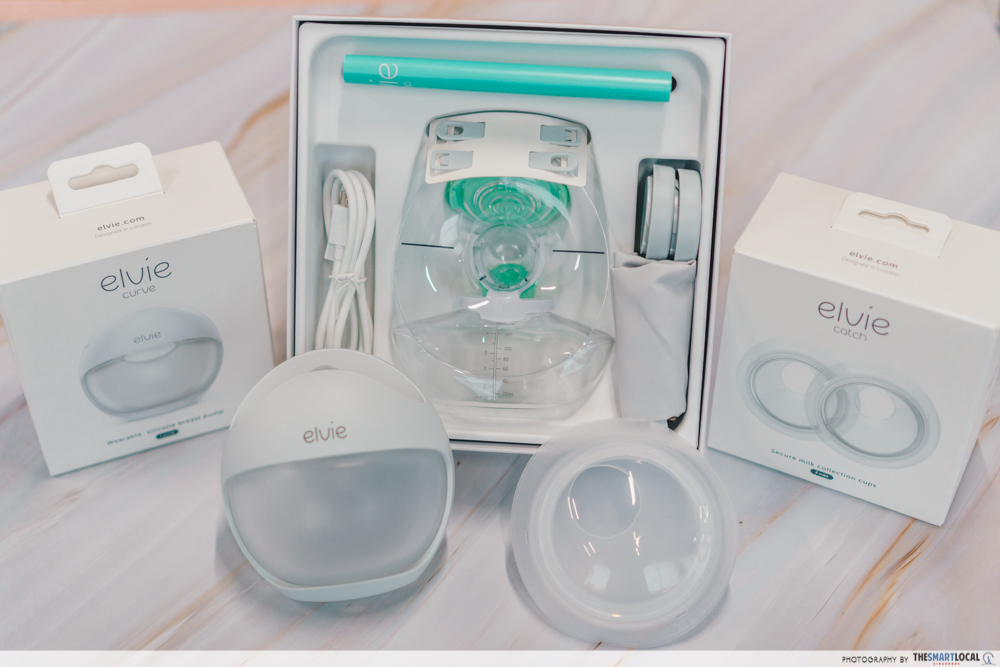 When Hatchery Cribs offered me the chance to try the Elvie Pump, I jumped at the opportunity. In fact, I’d done a fair bit of research on wearable pumps, but never found the courage to bite the bullet and give them a go. I’d seen other wearable pumps with bigger bulkier motors sporting numerous small parts in a complex assembly, but was pleasantly surprised by the Elvie Pump’s intuitive design.

The Elvie Pump Single comes delicately packaged with a palm size motor, two breast shields of different sizes (24mm and 28mm), and two ingot-shaped bottles that will allow you the convenience of two consecutive pumps without having to transfer the milk out to another container and sterilising everything in between.

Less than a minute to reassemble

While the usual setting up of my everyday pump would set me back a good 5 minutes, the user-friendly make on the Elvie Pump opened my eyes to the painful amount of time I’d wasted fumbling around with all those loose parts.

There was a simple catch to release the bottle, and five main parts to sterilise: the valve, spout, bottle, seal and breast shield. Reassembly was also incredibly quick – I dare say it took me under a minute to figure it out and put the Elvie Pump back together without even flipping through the manual.

Pro pump tip #1: Assemble the Elvie Pump at home before stowing it away, that way when you need to pump, all you have to do is pop it into your bra and press start.

The beauty of the Elvie Pump is that there are no cumbersome tubes or protruding flanges for you to slot through your nursing bra all while under the shield of a nursing cover. Everything you need for up to two pumps fits neatly into the smallest of bags.

On top of that, a pump sesh can be easily put into motion even if you’re on-the-go because you just need to slot it inside the cup of your bra.

Pro pump tip #2: If you’re pumping one boob after another, fully assemble the second bottle with spout and valve for a quick swap when switching sides.

I’d heard from the grapevine that while wearable and easily concealed, other pumps in the market were still quite noisy when in use, lowering the overall utility of these pumps in a public setting. With the Elvie Pump, my fears of it drawing attention quickly dissipated when my colleagues were completely oblivious to the fact I was pumping at my desk.

Yield-wise, a level 4 suction on the Elvie was all it took to fully drain both breasts of milk in under 20 minutes – passing my suction strength test. 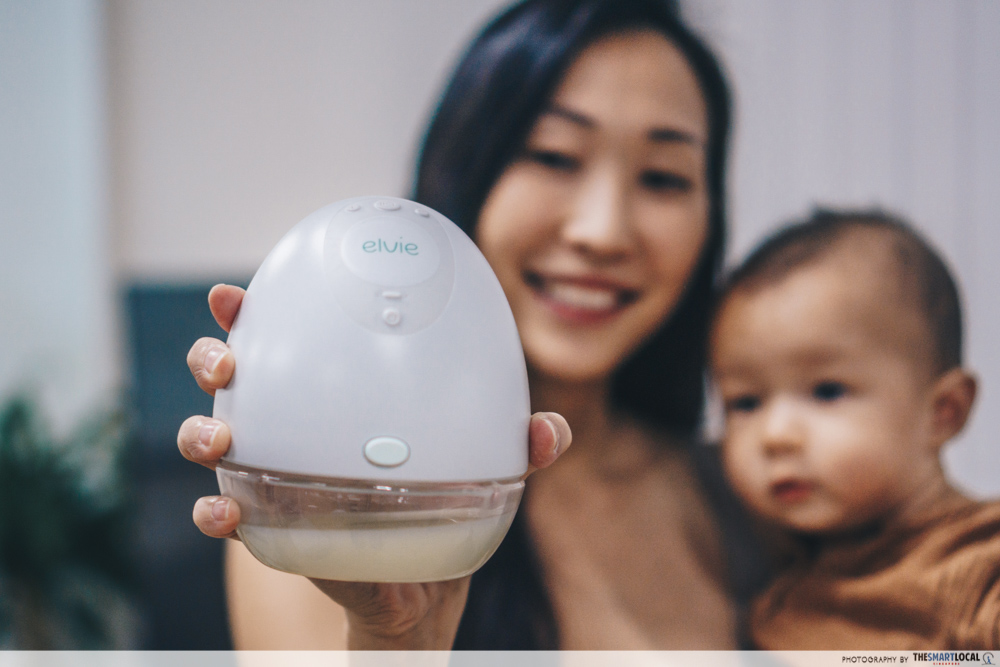 The little milk containers look tiny, but these can actually hold up to 150ML of milk!

You’ll find two expression modes on the Elvie Pump: stimulation and expression. These come with seven intensity settings for you to tailor suction strength to mimic your baby’s natural latch. Expression mode kicks in automatically when the pump detects a faster let-down of milk.

Mobile app that controls and monitors pump volume and timing 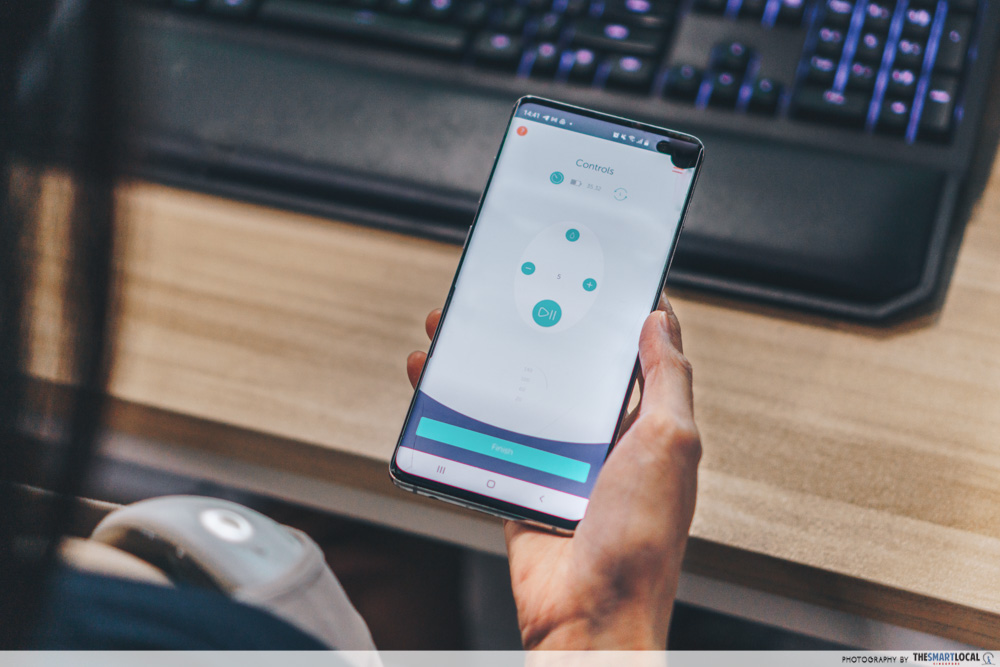 As an added bonus, you’ll be prompted to pair your Elvie Pump with your phone to track your pump sesh in real time and get an estimate of how much milk has been collected. No need to awkwardly crane your head and peer into your blouse just to “check volume”.

Note: This step is completely optional, and the pump is also fully functional without using the app at all.

Pro pump tip #3: If you’re stuck in an extra long meeting whilst pumping, you can pause or stop the Elvie Pump completely through the app on your phone. 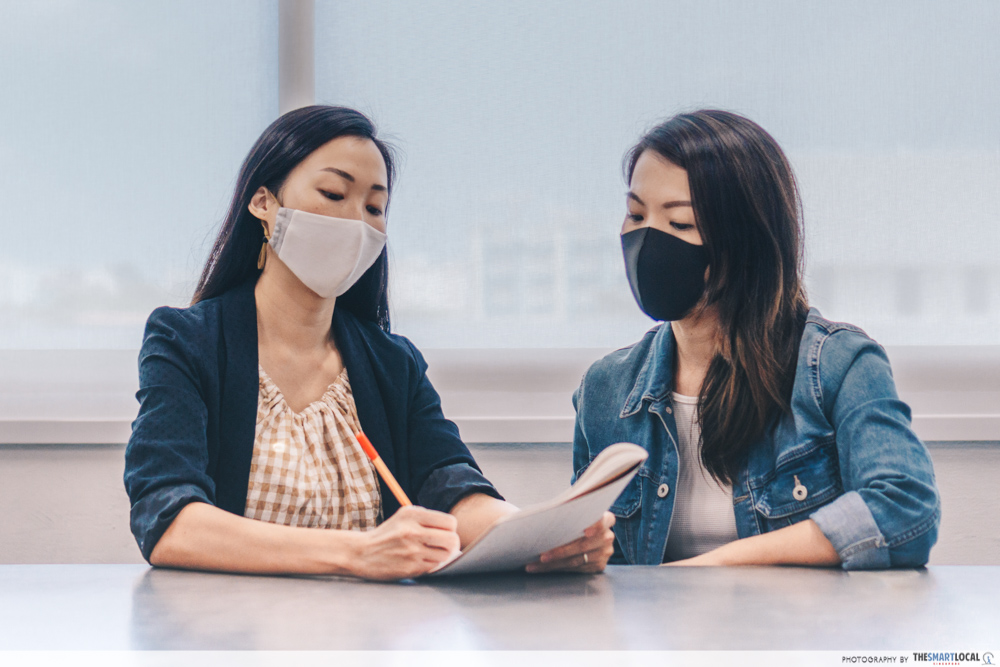 Spot the breast pump! So discreet and quiet that my colleague didn’t even notice I was in the middle of a pump sesh.

Depending on your outfit of the day, you won’t even need to lug around a separate nursing cover. If you’re sporting a fairly elastic bra or one that allows you to loosen the strap, you’ll easily be able to pop the Elvie Pump into the cup and let the pumping begin. 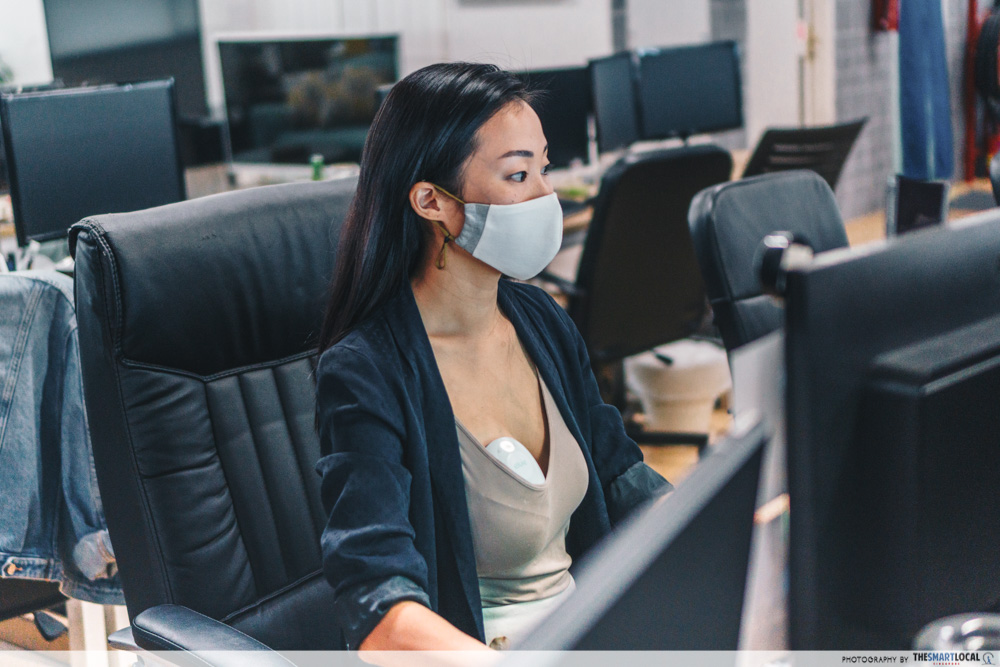 For the purpose of showing you how it looks in action, here’s how snug the Elvie Pump sits in said top.

Pro pump tip #4: I found that built-in bra tops worked extremely well under clothes in place of a traditional nursing bra to accommodate the Elvie Pump without me risking flashing too much skin or having to fiddle around with buttons or straps.

Once you’re done pumping, just pop out the bottle attachment, screw the cap on and store.

Pro pump tip #5: Investing in a freezable lunch bag like the Packit will keep your milk colder and fresher on the commute home. 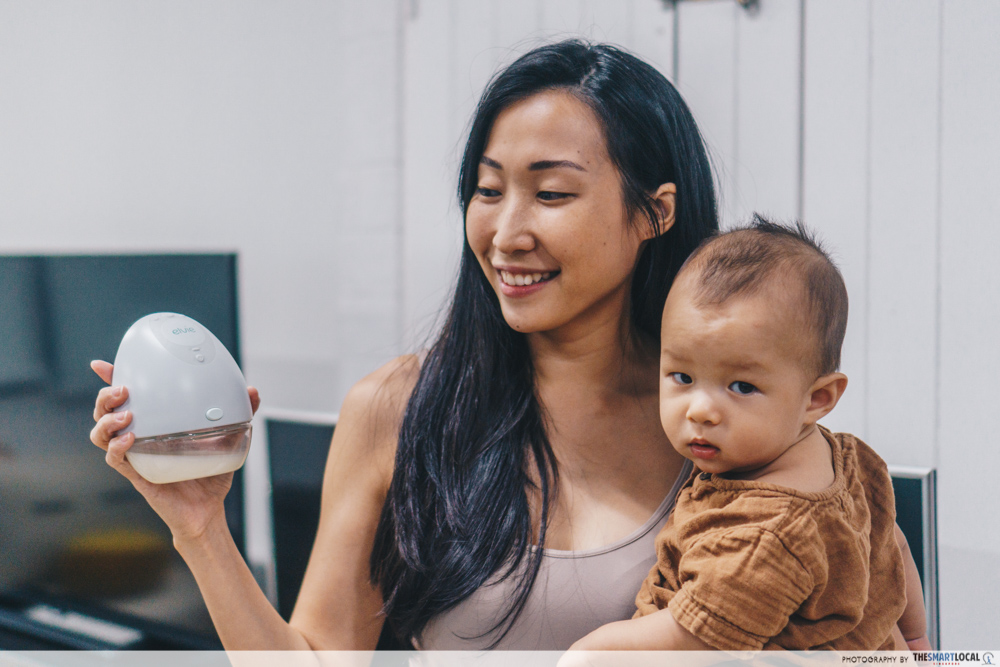 Having tried a grand total of four pumps ranging from budget ($30) to boujie ($450++), I can safely tell you that pumps are something you can’t scrimp on. As someone who wears hats of both the working mum and a stay-at-home mum with two kids, pumping was something I dreaded for the sheer fact that it rendered me useless and confined to a corner for 20-30 minutes every 3-4 hours. 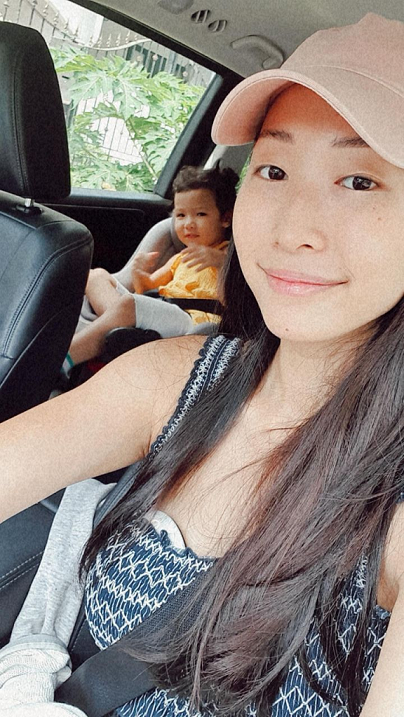 I’ve even unlocked pumping whilst driving to really rev up my milk production
Image credit: @elliesheananigans

But with the Elvie Pump, it’s as though I’ve unlocked a new realm of possibilities to take on anything from full-day corporate workshops to chores around the house whilst keeping my supply up. I’ve also taken to expressing milk while driving around running errands so my time is spent wisely. Not gonna lie, I haven’t laid a finger on my old pump since my virgin pump on the Elvie Pump. It’s that convenient.

Price-wise, while the double pump system falls on the pricier side at $799, it does come with a 2-year warranty and is backed by a 4.5-star rating and over 400 glowing reviews. As a latching and pumping mama, I’m happy settling for the Elvie Pump Single ($439) that makes my home/office situation that much easier. 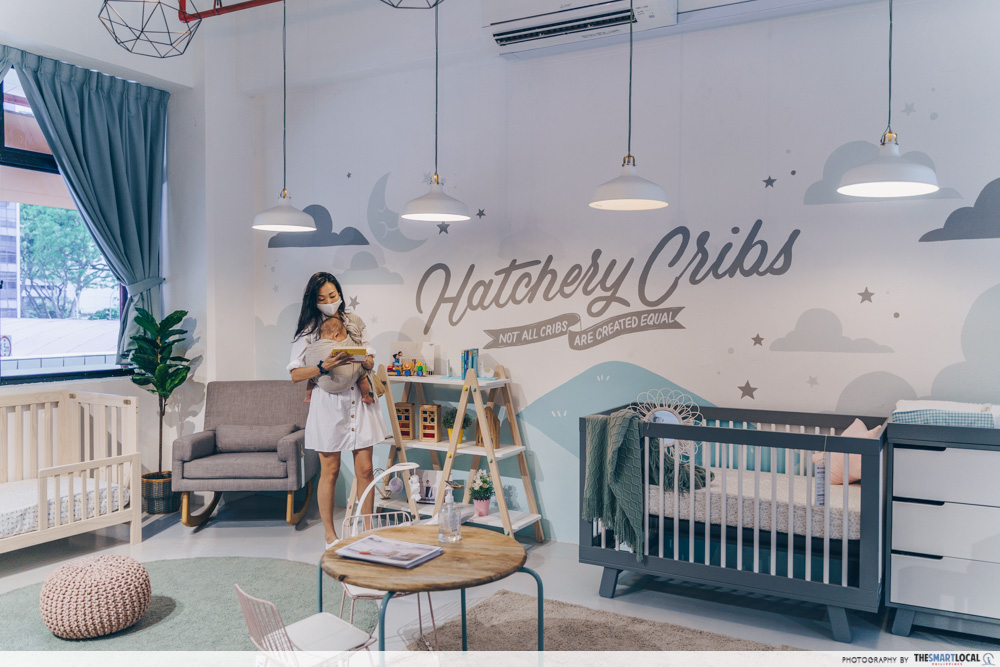 If you’re a warrior mum holding the fort at home and in the office, and your current breast pump is leaving you high and dry, you can make your way down to Hatchery Cribs to cop a real feel of the Elvie Pump and pick one up for yourself. 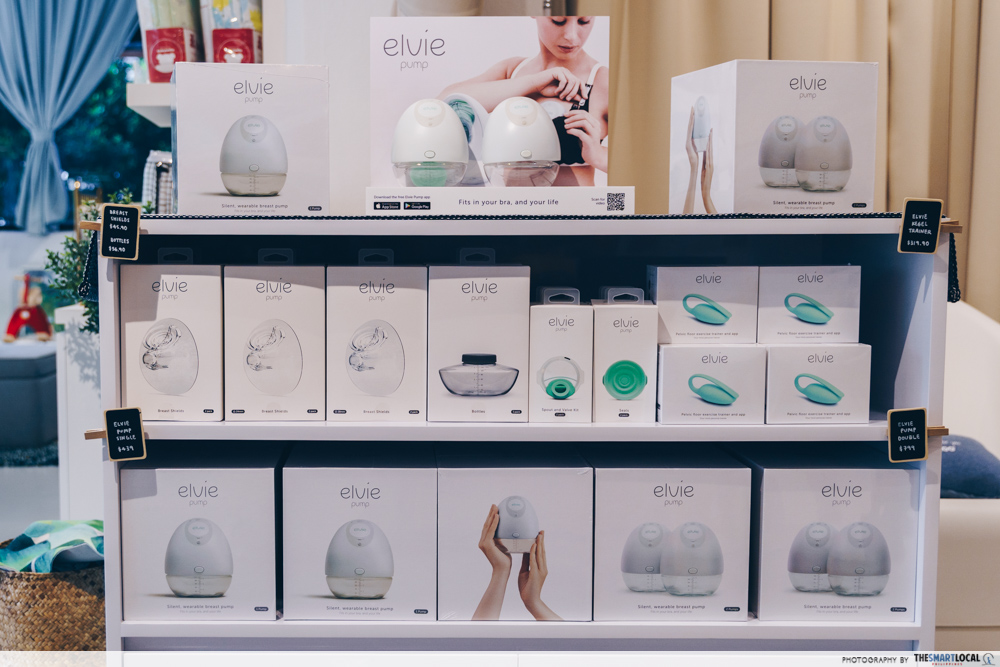 Hatchery Cribs stocks the whole suite of Elvie accessories from spout and valves to pump seals, spare bottles and breast shields (21mm, 24mm and 28mm). You’ll also be able to get your hands on their newest additions to the Elvie fam: the Elvie Catch and Elvie Curve. 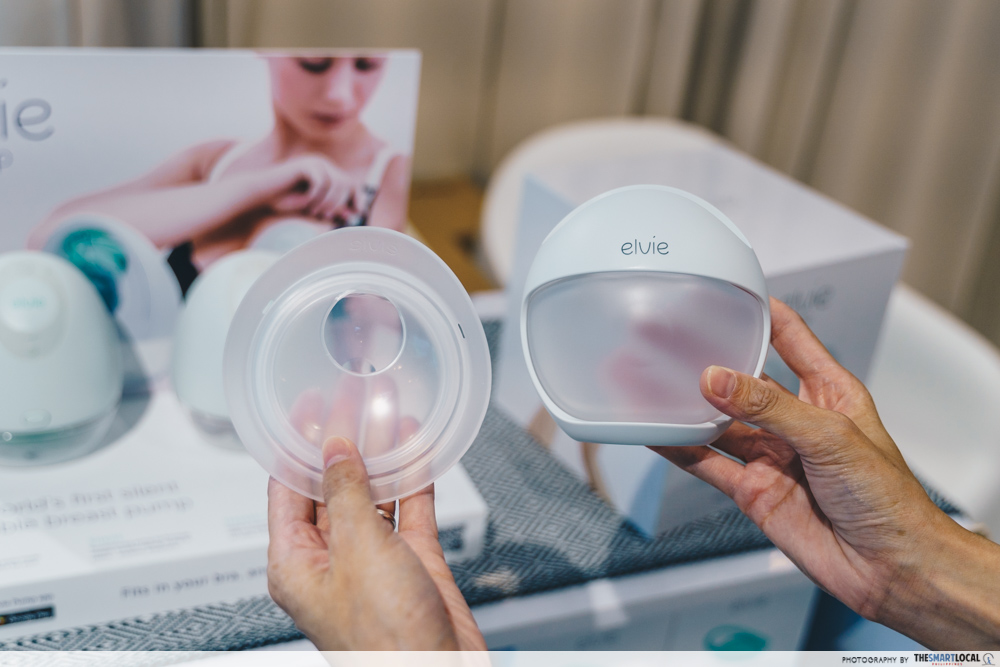 And because all nursing mothers know the pain of wasting a single drop of liquid gold, Elvie has even come up with their own range of milk savers and a hands-free suction pump. Perfect for the newborn to infant stage where your milk production is on overdrive. 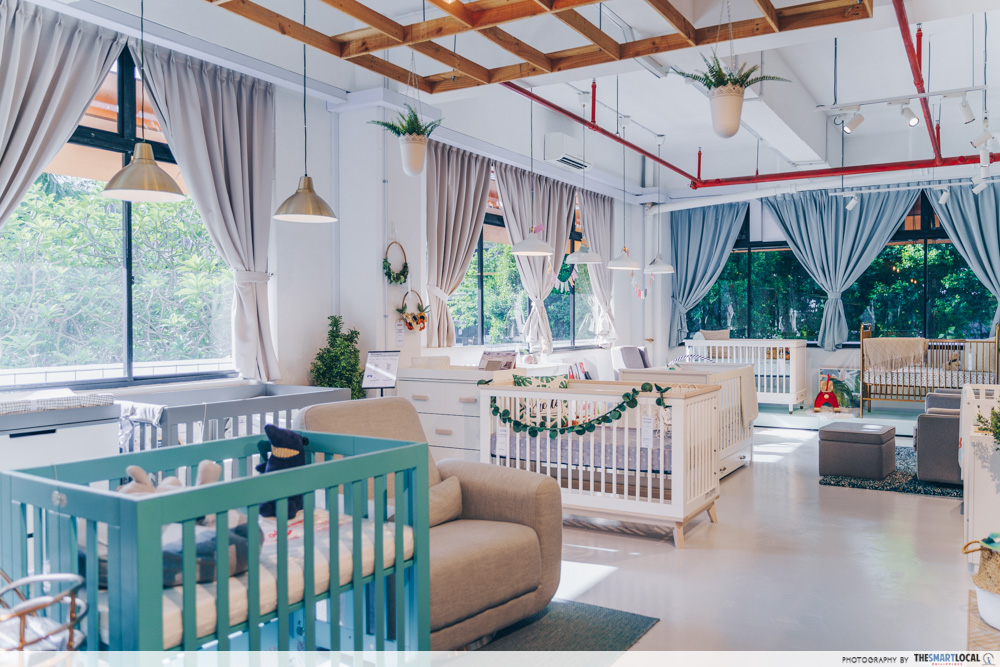 Hatchery Cribs’ range of Babyletto convertible cribs you’ll find here have been on the registries of the Kardashian sisters and even Duchess of Sussex, Megan Markle.

If nesting fever has set in, the Hatchery Cribs showroom will be your one-stop-shop for all things newborn and baby. The brand is even known to stock designer and award-winning baby essentials from cots to changing tables that even celebrities and royals swear by.

The crib brands you’ll find here include Babyletto, DaVinci Baby and Million Dollar Baby, with a good number of them giving you extra mileage as 3-in-1 convertible cots suitable from birth all the way till the age of six years old. Brownie points go to the fact that these cribs are constructed with Greenguard Gold certified materials that ensure your baby’s health and safety. 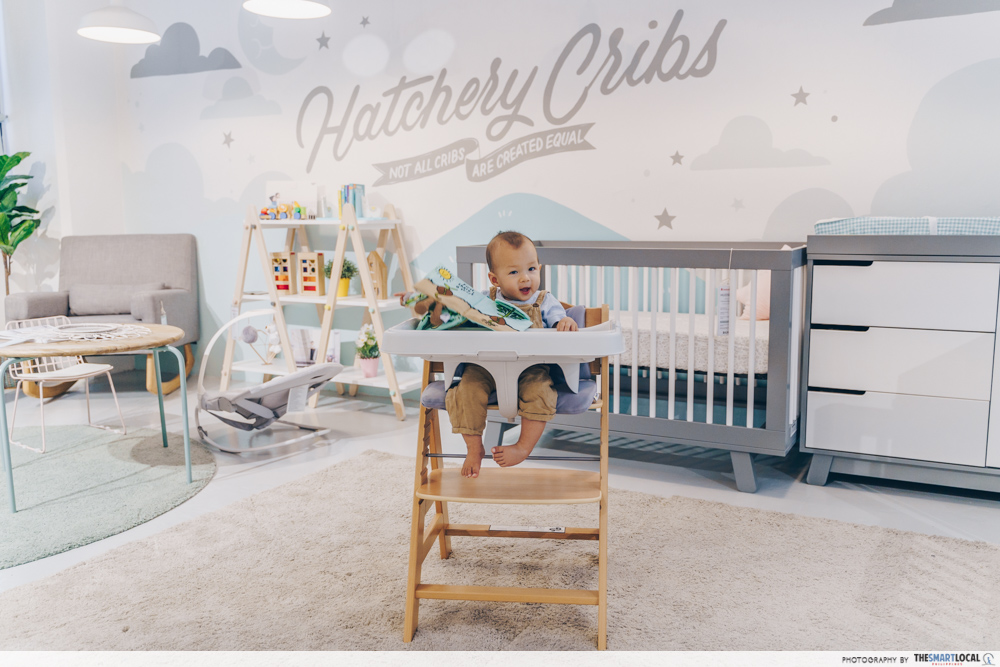 Other notable baby products to consider are German-designed Hauck’s range of tip-resistant, beechwood high chairs and one-hand-fold strollers that are value for money and super aesthetic to boot. 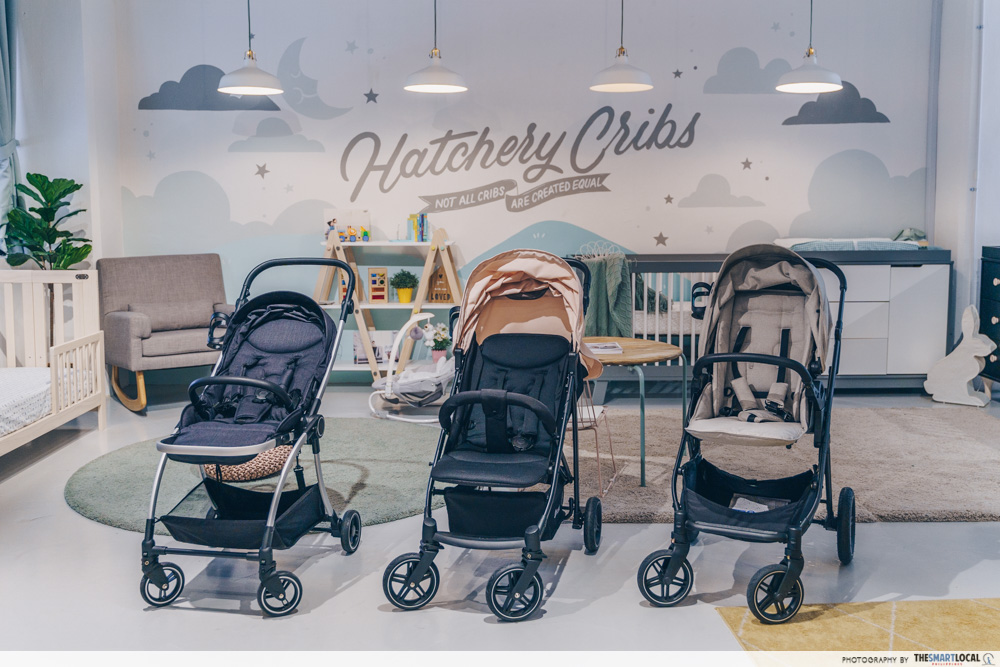 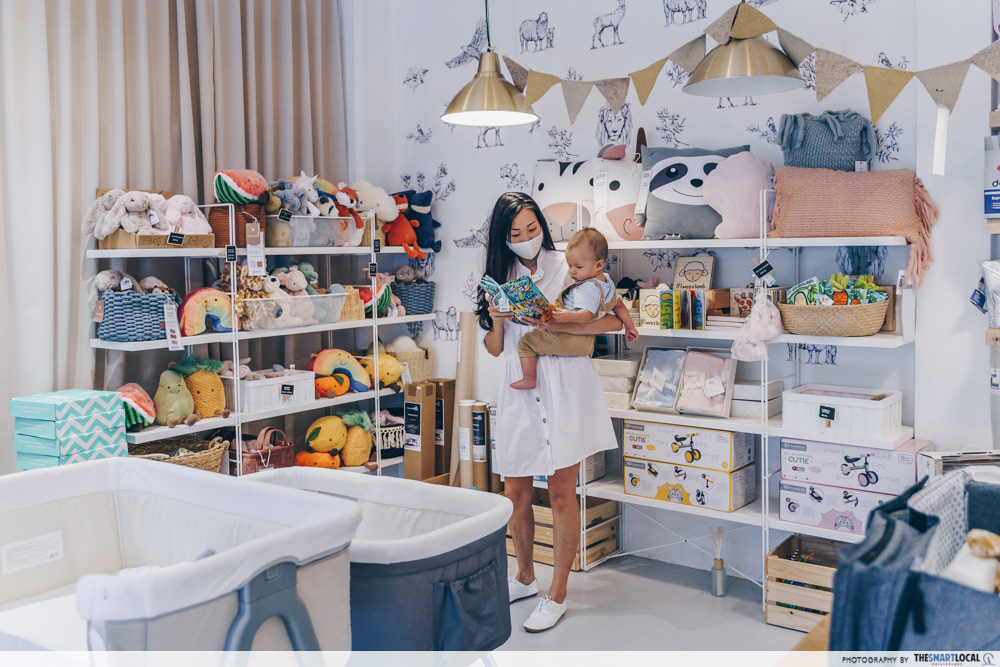 On top of the nursery mainstays, there’s a dedicated section for Jellycat plushies, cloth books, soothers and toys to level up your little ones bedroom or play area. 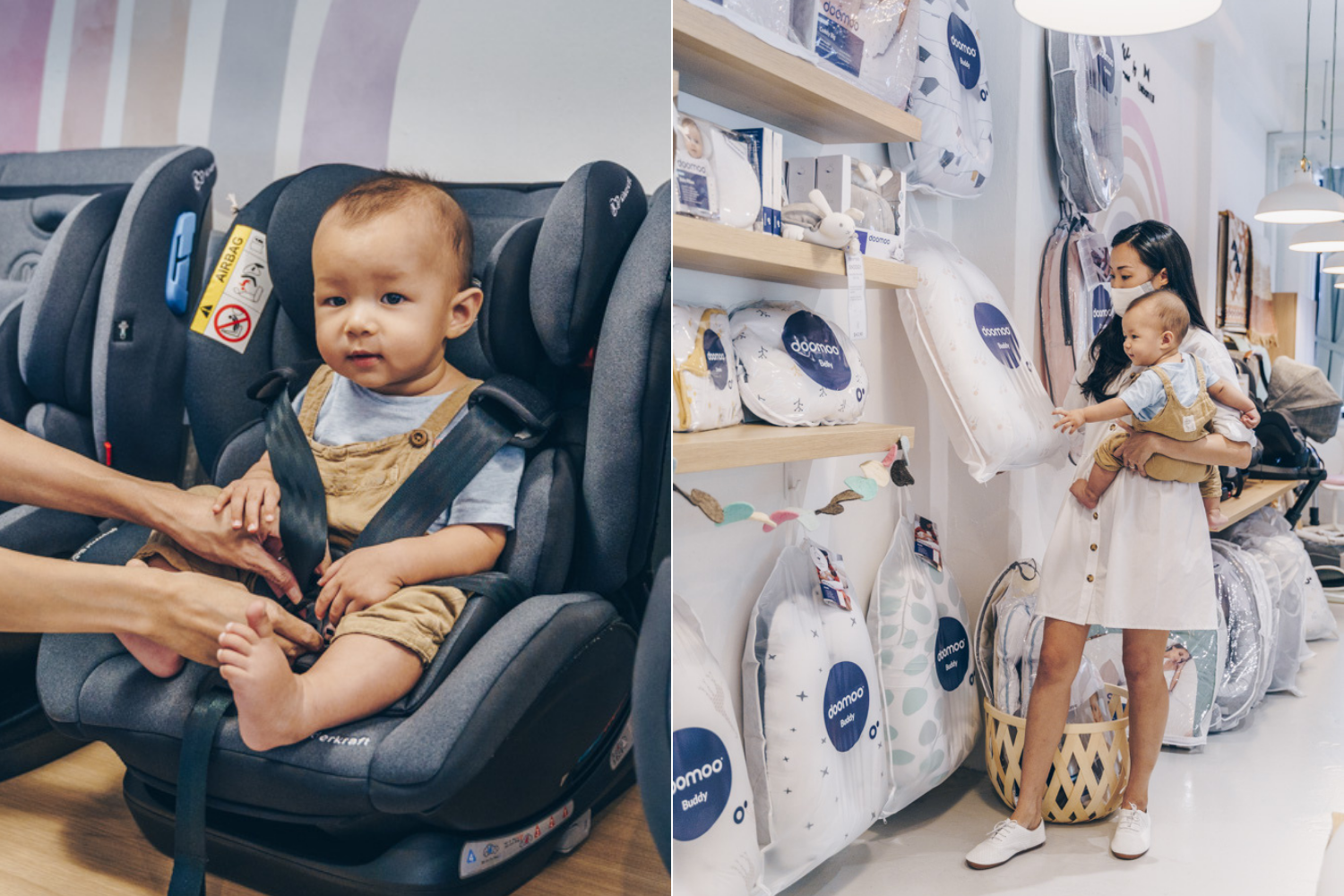 You’ll be able to pick up everything from Kinderkraft’s highly-lauded range of infant and toddler car seats championed by ex-Victoria Secret model, Joanna Krupa, and Belgium-made organic cotton nursing pillow by Doomoo that pulls its weight as a lounger and a bolster!

Whether you’re starting from ground zero and looking to deck your entire nursery out with furniture or just a working mum in desperate need of a reliable pump, you’ll be able to find that and more at Hatchery Cribs’ showroom.

Just remember to make an appointment prior to your visit as there’s a cap on the number of people that Hatchery Cribs takes in at any one time. In the meantime, you can browse and shop the Elvie Pump and accessories here.

This post was brought to you by Hatchery Cribs.
Photography by Natalie Ng. 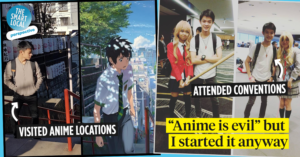 My Parents Thought Loving Anime Was A Phase But I’m Still A “Weeb” 10 Years Later
How To Get Rid Of Birds Flying Into Your Windows, For Every Exasperated HDB Dweller 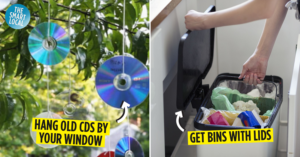