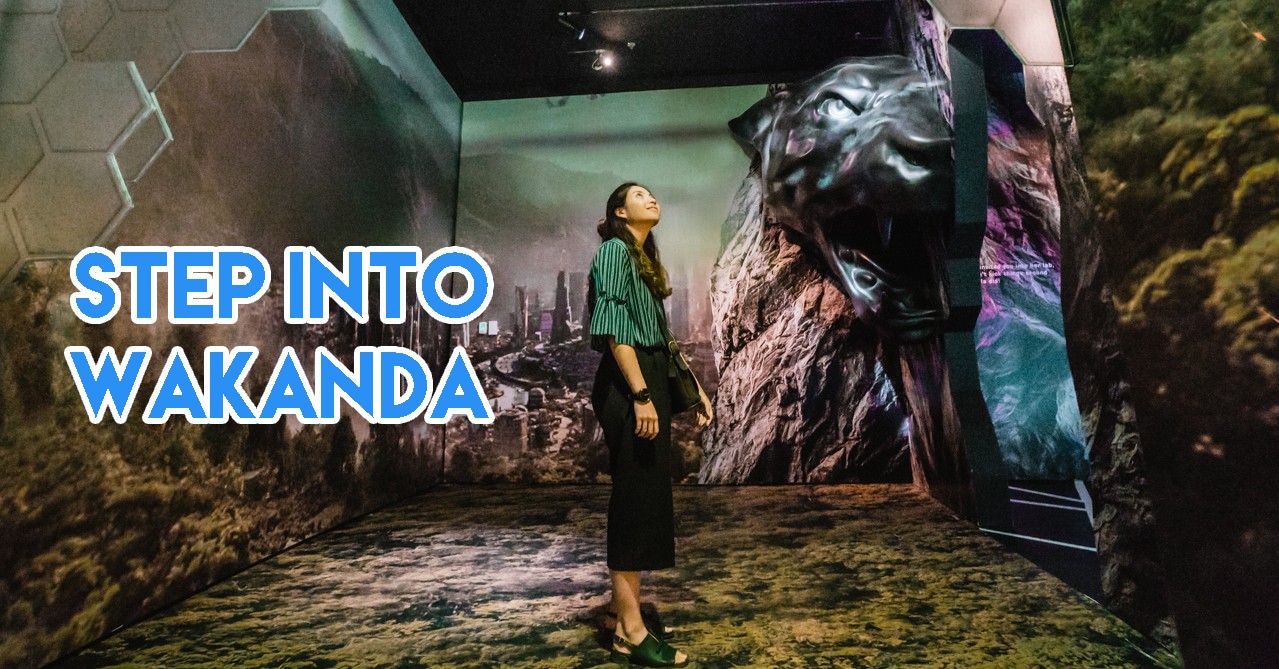 For most of my childhood, there was a strict no-touch policy at museums. But those days are long gone, especially when we have new exhibitions at ArtScience Museum where you’re free to interact with most of the art.

From now till 30 September 2018, you can stroll through the Kingdom of Wakanda at Marvel Studios: Ten Years of Heroes or admire the beauty of massive wind-powered creatures at Wind Walkers: Theo Jansen’s Strandbeests.

And of course, permanent exhibition Future World: Where Art Meet Science’s flurry of digital art is always worth stepping in for – especially since it’s your last chance to see certain exhibits before their major revamp in August!

MARVEL Super Heroes are topics exciting enough to spur any flatlining conversation into one of full-blown enthusiasm. Understandably so, when we’ve all watched and loved films from Marvel Studios’ Iron Man to Marvel Studios’ Black Panther.

With an exhibition like Marvel Studios: Ten Years of Heroes, you’ll be revisiting the past decade with Super Heroes like Iron Man, Captain America, Thor – the list goes on and on. 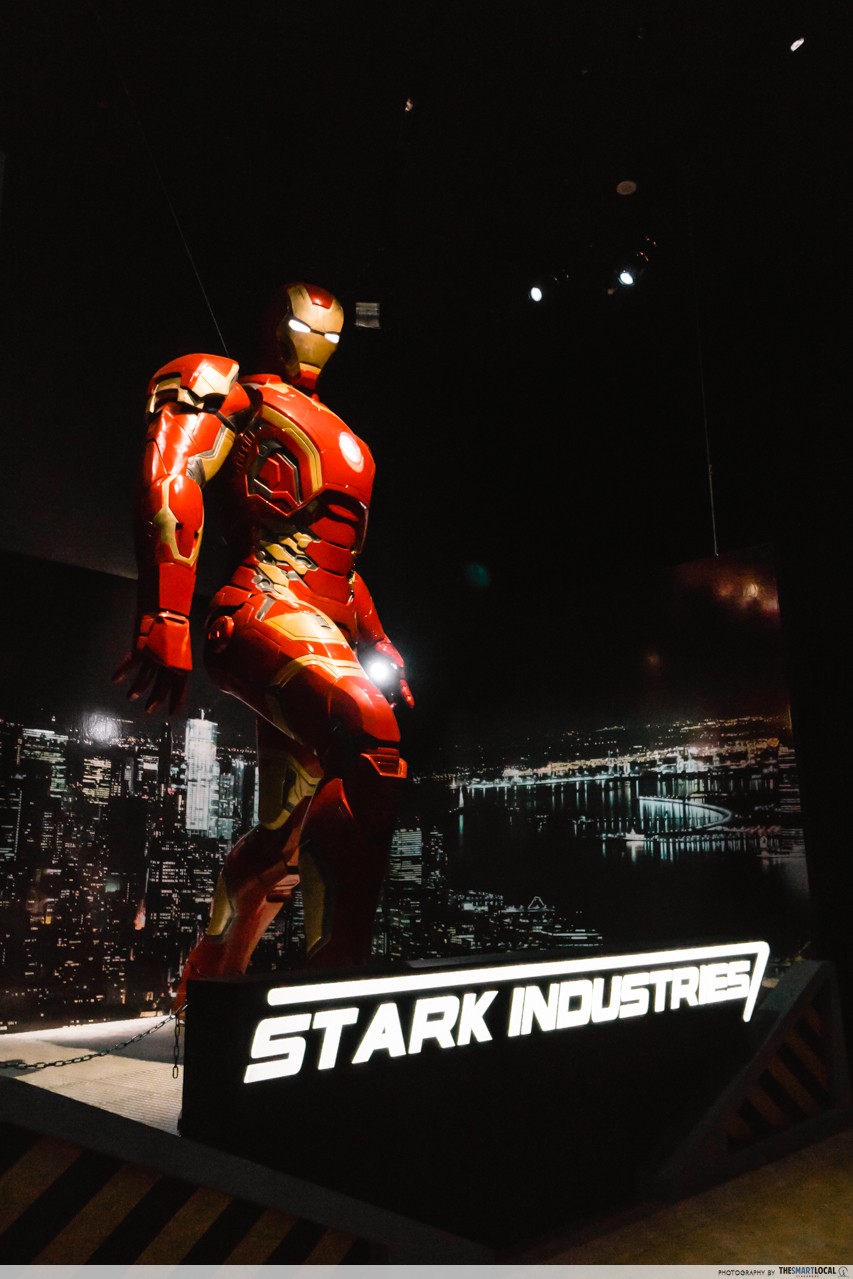 Look forward to a larger-than-life replica of Iron Man – stretching 5m! – and over 40 Iron Man suits projected in 3D to showcase the genius of Tony Stark. 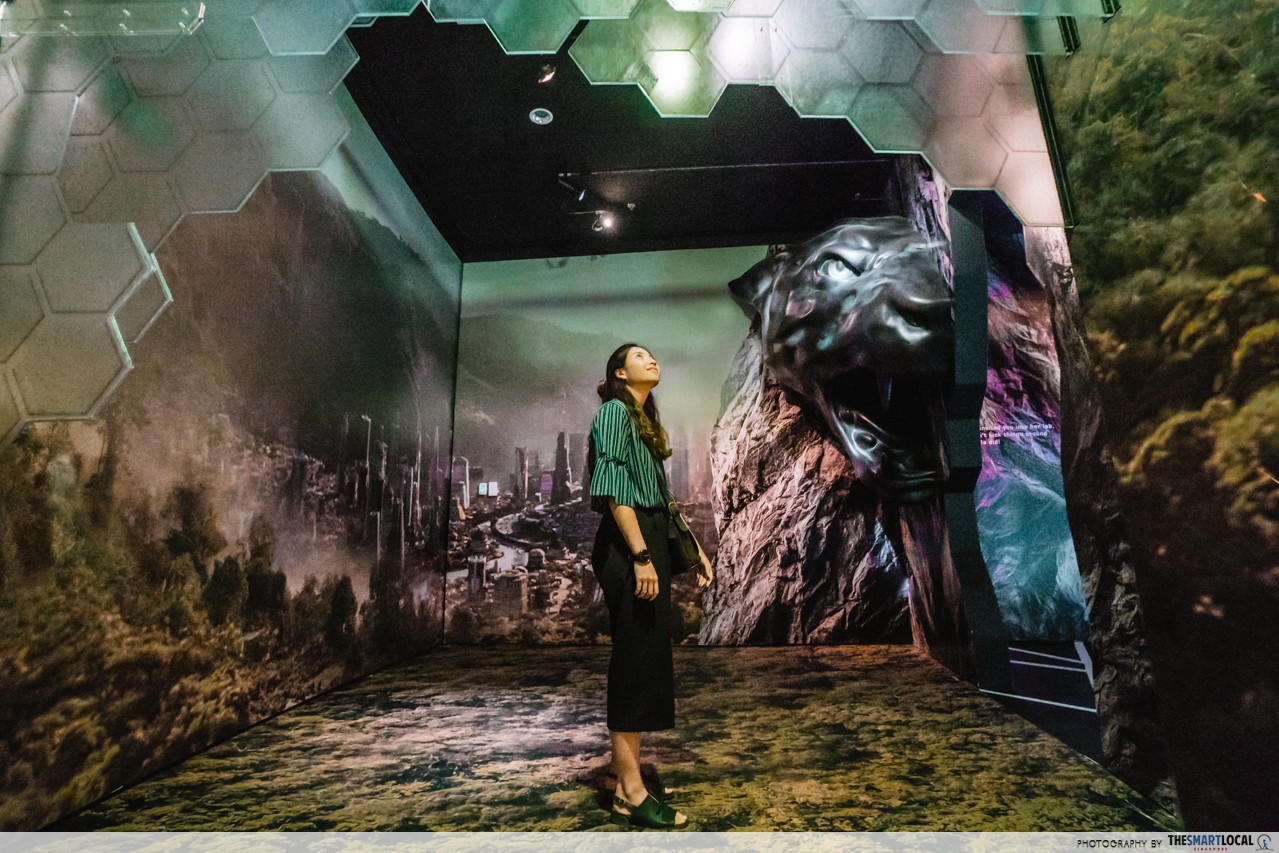 The Kingdom of Wakanda – forests, science lab, and all.

You’ll also have a chance to step into the mysterious Kingdom of Wakanda and see how vibranium is used in Shuri’s lab. There’ll be a massive panther head for you to gawk at, fun fact, it weighs more than 100kg!

Travelling through different dimensions is no longer just for Doctor Strange and others well-versed in the art of astral projection. You may be entering via Singapore’s ArtScience Museum but this exhibit’s mirrored portals will make you think you’ve ended up in other parts of Singapore.

There’s even an augmented reality experience where you can use the Sorcerer Supreme’s power to go forth and bend reality. 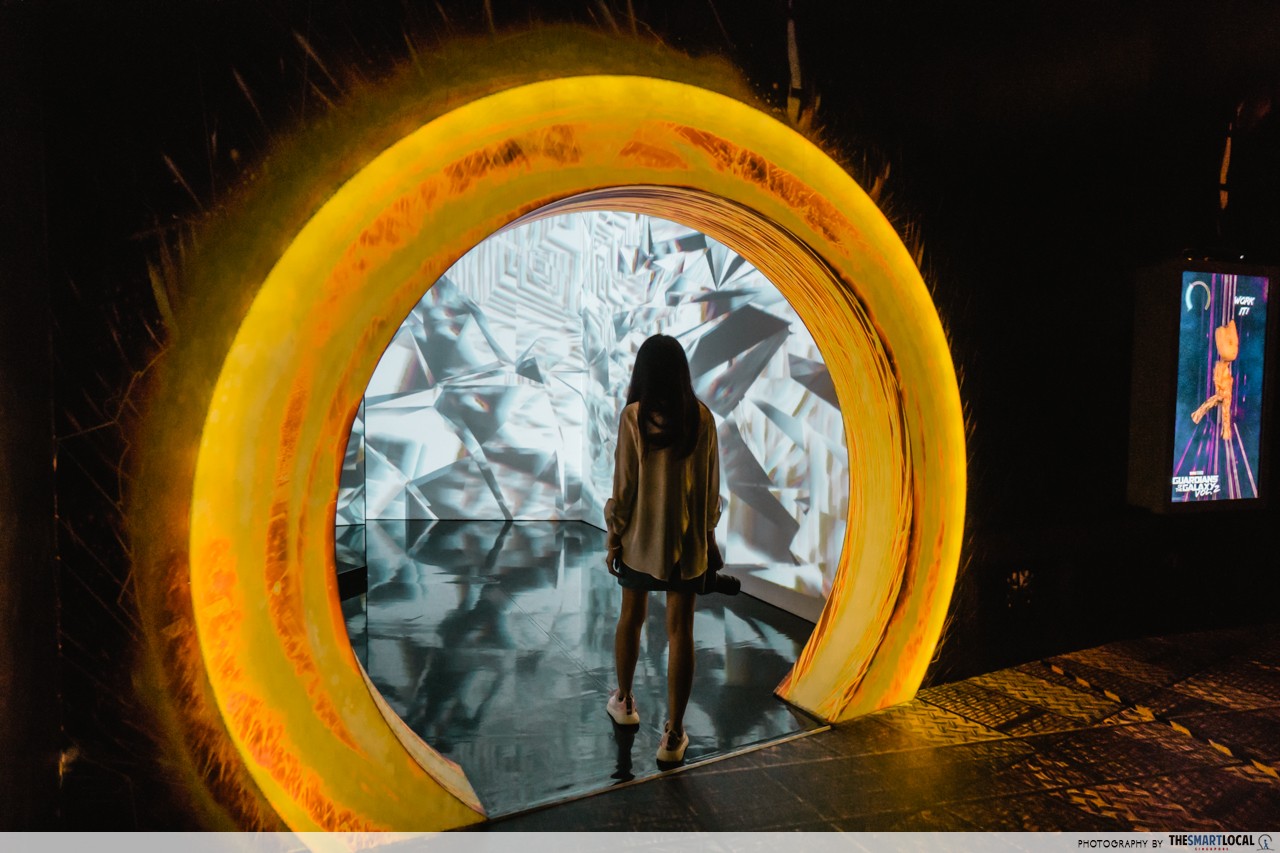 Walk through Doctor Strange’s light portal to view the Eye of Agamotto.

There’s a Marvel Studios gift shop at the very end, where you can pick up tokens like Thanos’ Infinity Gauntlet – 6 infinity gems included.

Find out more about Marvel Studios: Ten Years of Heroes.

We’re not talking about GoT’s White Walkers but instead, Wind Walkers – wind-powered creatures that are made from everyday things you can find in your house like PVC tubes and cable ties. But a description itself isn’t enough to describe the lifelike beauty of their movement: 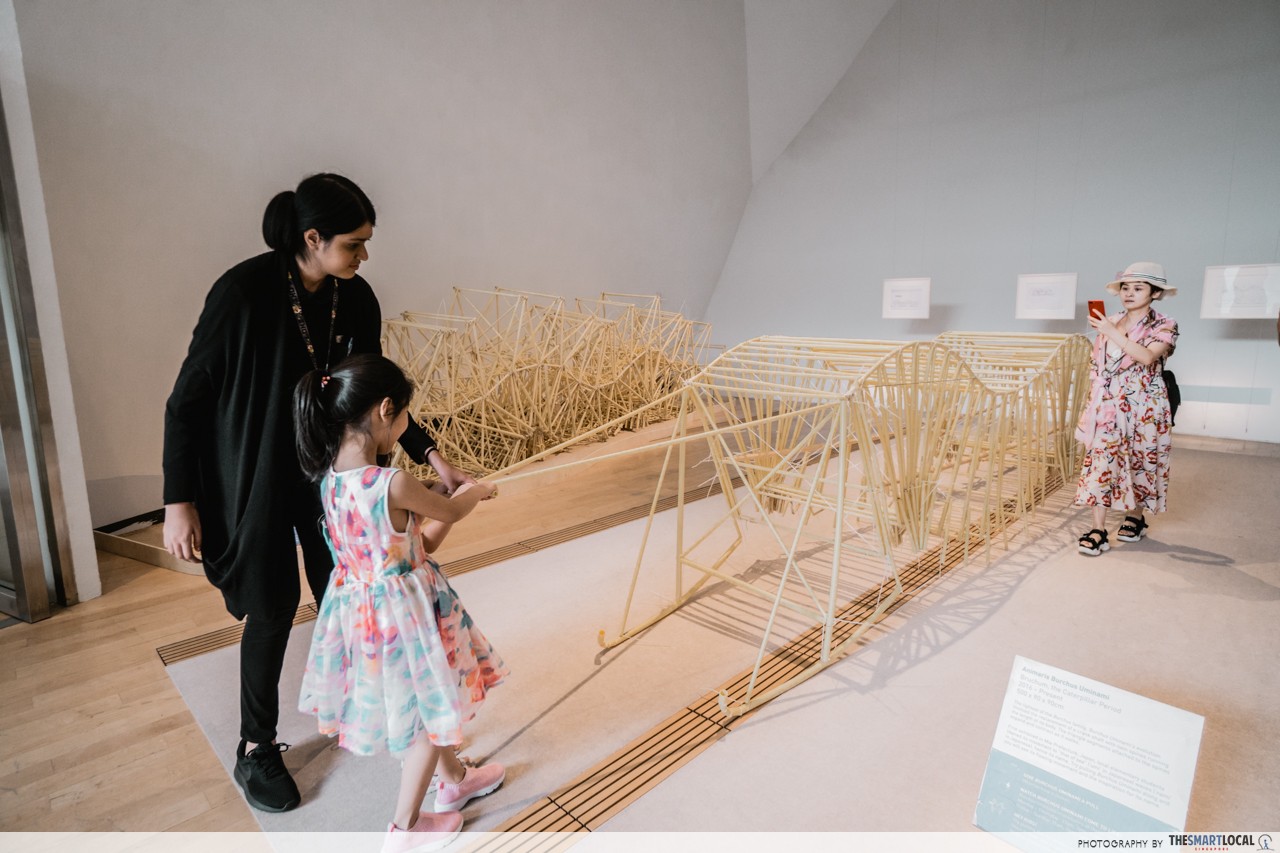 Artist Theo Jansen terms these creatures as Strandbeests, which means “beach animal” in Dutch. With his background in Physics, Jansen has painstakingly put together each and every joint of these animated creatures in his lab. 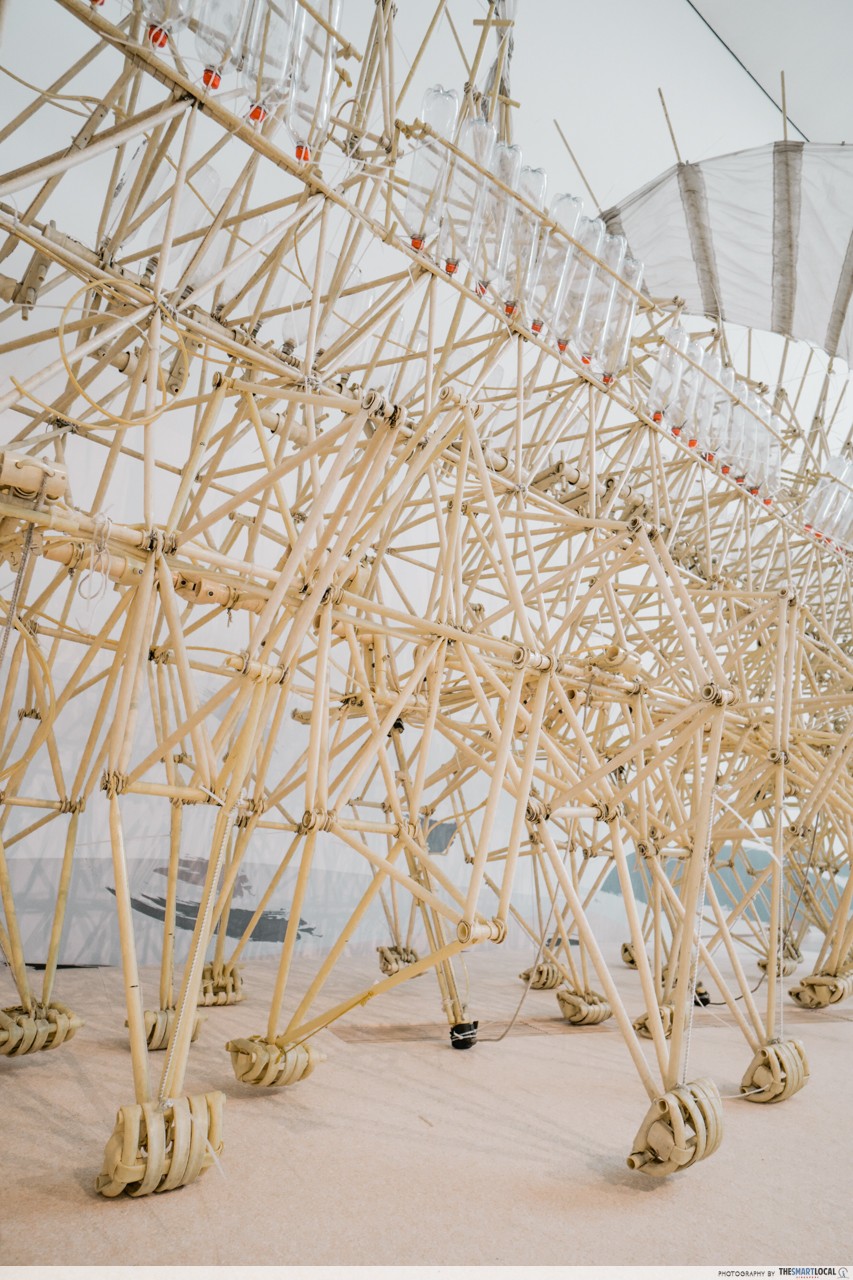 Each Strandbeest has a Latin name reflective of its characteristics, and are classified into different time periods so you can keep track of which generation they’re from. Head down to interact with some of these 13 large-scale creatures for yourself!

Bonus: Watch these Strandbeests move during guided reanimation demo at scheduled times or join us at an exciting line-up of tours and workshops.

Permanent exhibition Future World: Where Art Meets Science has been here for a while, but some exhibits might not be for much longer as the space is being revamped in mid-August.

So, whether you’re a first-time or repeat visitor, pop by and wander through displays like projected Japanese-style waves, a digital aquarium, and an immersive room with swooping lights all around. You can interact with most of the artworks too!

For instance, step into a room to fully experience this immersive audiovisual display:

Titled Crows are Chased and the Chasing Crows are destined to be Chased as well, Transcending Space, this installation might make you feel slightly woozy, but the beauty of the visuals and audio make it worth the watch. 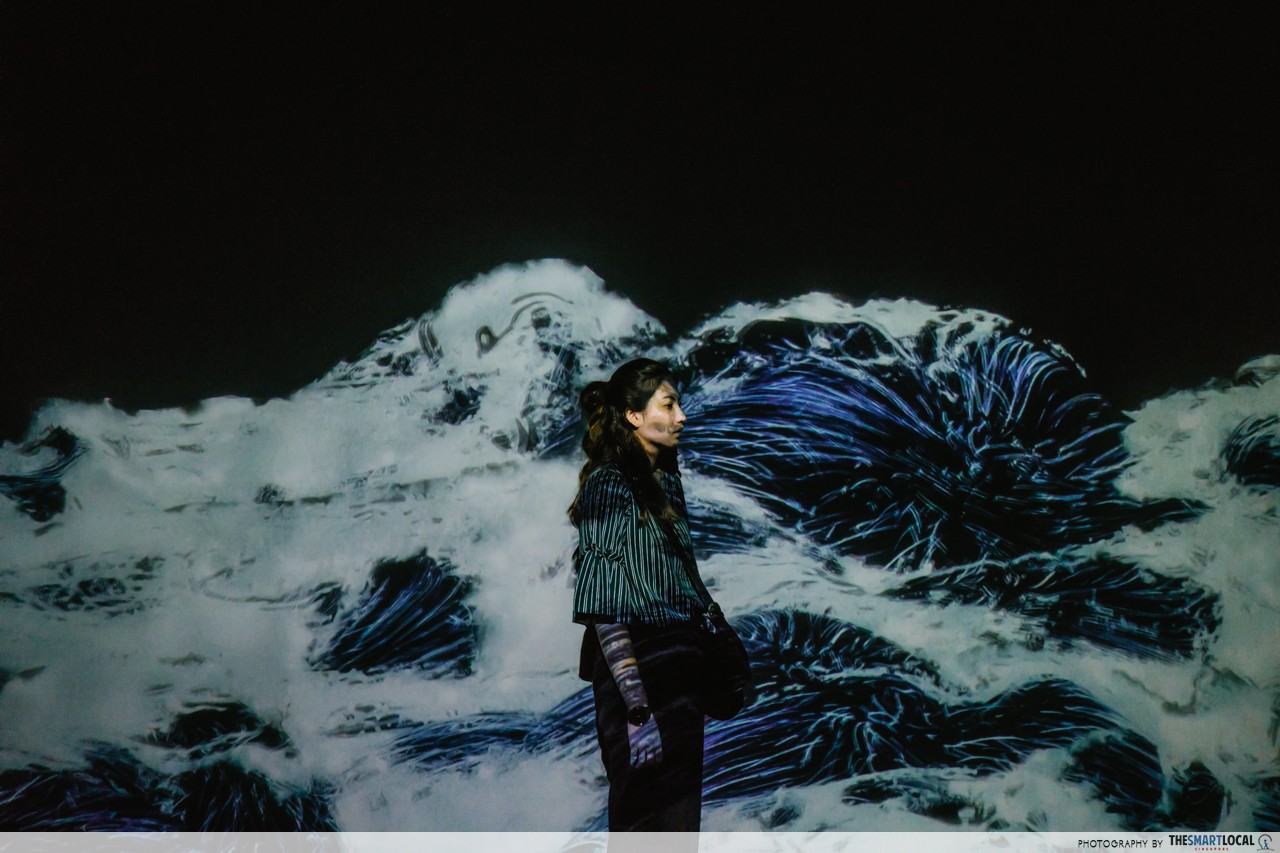 Another exhibit, Black Waves, has walls of crashing waves that are illustrated in the style of traditional Japanese painting. Sink into one of the beanbags – the waves are so soothing that you could easily drift off to sleep. 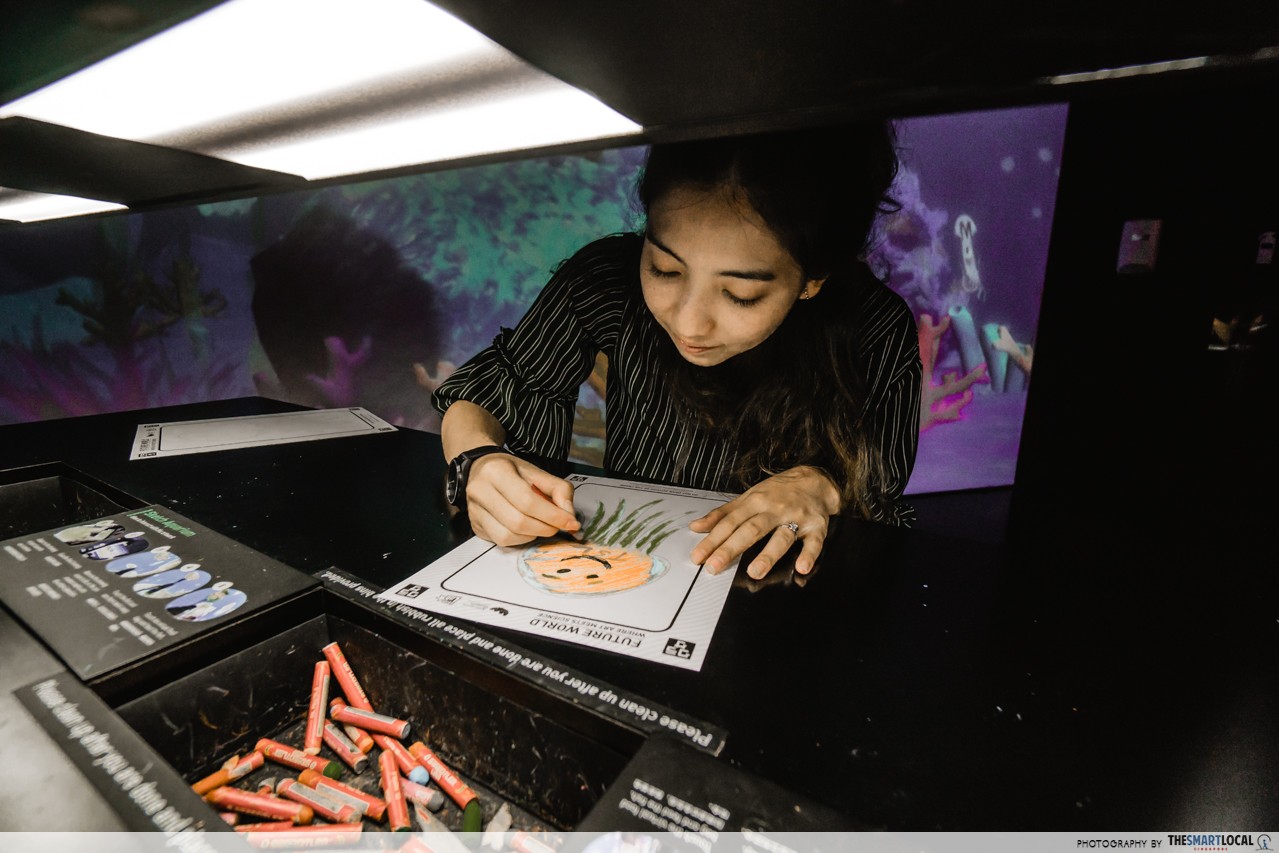 Make it a point to visit the Sketch Aquarium too. Colour your own rainbow fish, jellyfish, or choose from a selection of aquatic animals to add to the virtual aquarium. 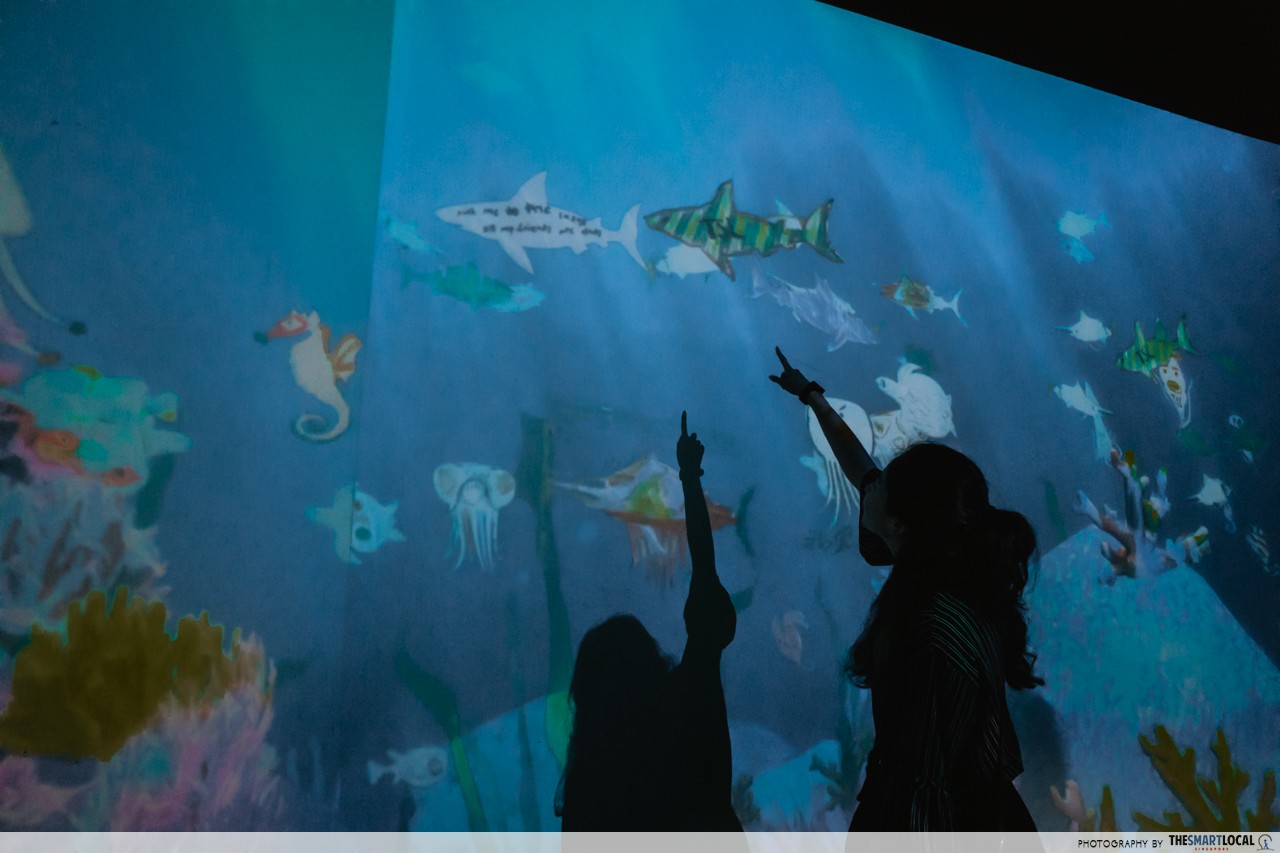 Find out more about Future World: Where Art Meets Science.

3-in-1 museum exhibitions in Singapore 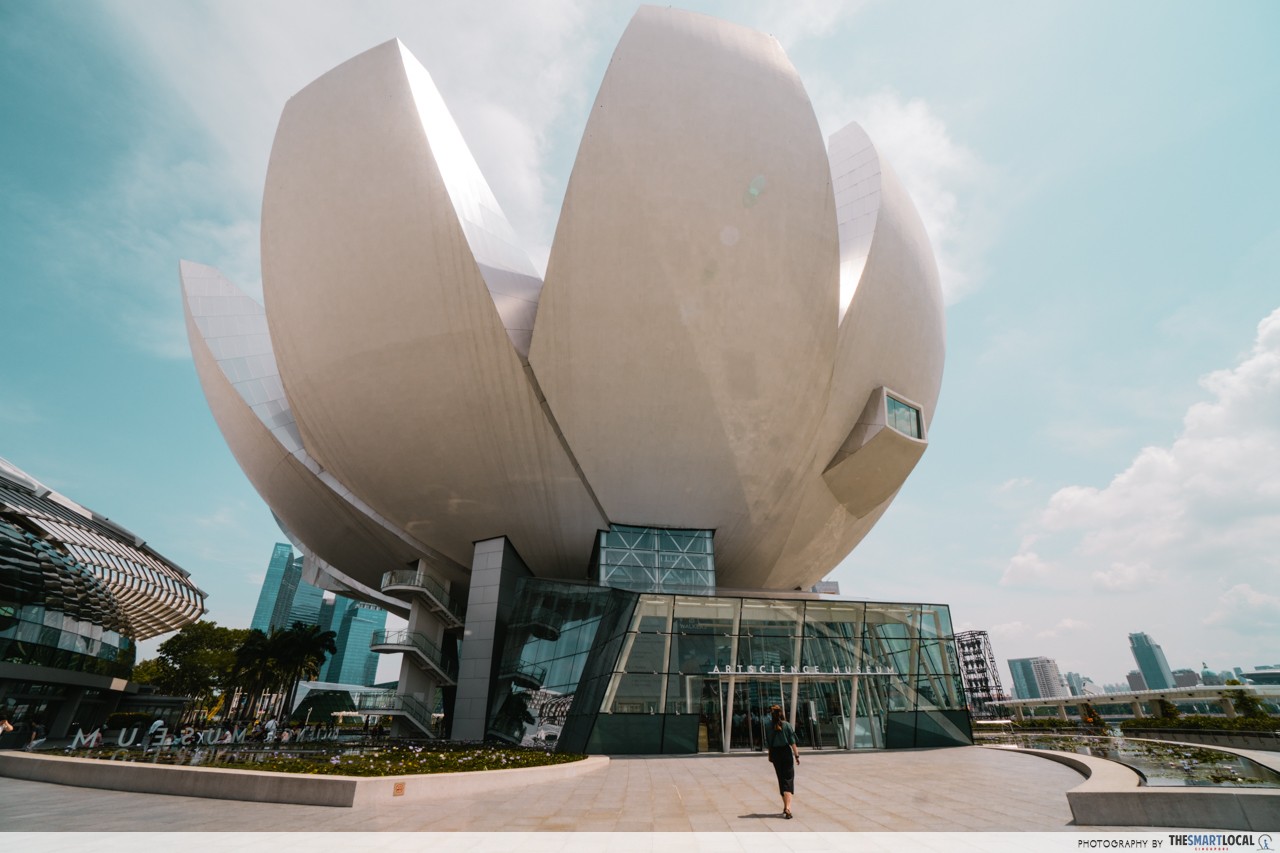 With exciting exhibitions showcasing Marvel Studio Super Heroes and massive Strandbeests ambling by, you’ll be spending a whole lotta time at ArtScience Museum. Make the most of your trip and head down to Future World’s installations before mid-August – some of the installations will be revamped after that, so don’t miss out on seeing your favourite artworks!

Address: 6 Bayfront Avenue, Singapore 018974
Opening hours: Mon to Sun: 10AM-7PM
Admission to all 3 exhibitions: $34 for Singapore residents, $40 for foreigners, $24 for students (Ticket prices are valid from now till 12 August)

This post was brought to you by ArtScience Museum.

Ben & Jerry's Has A 1-for-1 Deal On 5 Aug For You To Share The Love With Your BFF
8 Popular Anime Themed Cafes In Tokyo - Pokémon, Hello Kitty & Studio Ghibli