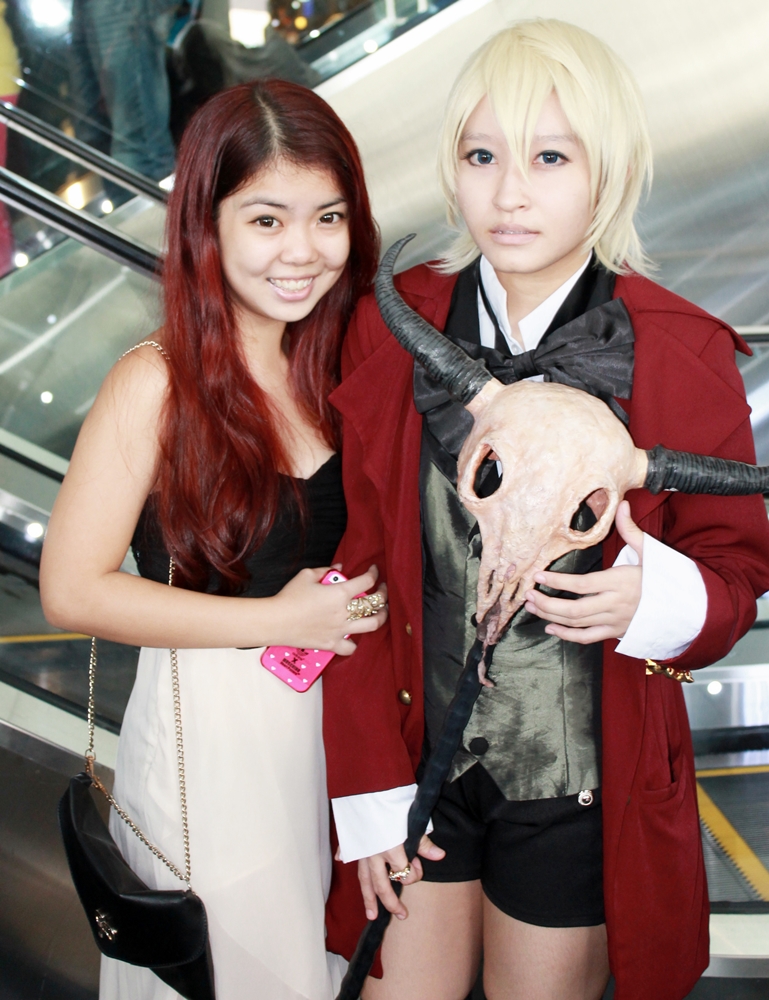 I headed over to AFA this weekend.

For the unfamiliar, 8 – 10th November was the annual Anime Festival Asia event in Singapore. It is at Suntec as it always is, and I have steadfastly refused to go for years but this time I decided to, thanks to my very persistent friend who dragged me along.

I have a very (admittedly) strained impression of cosplayers, saved only because my very good friend is one. If not for her, I might have been a lot harsher on my words regarding them.

So I probably needed to go! It did visibly impress me.

I’ll let the images take over here on: 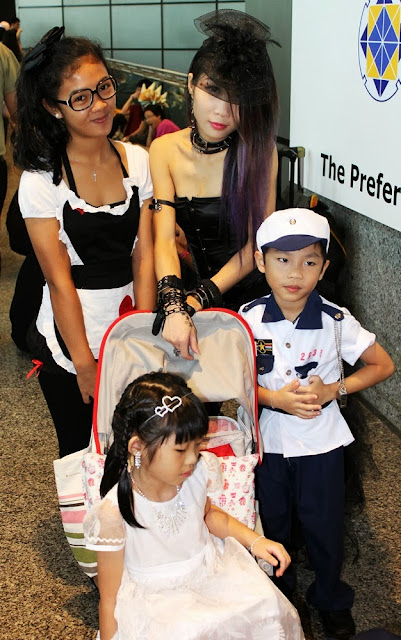 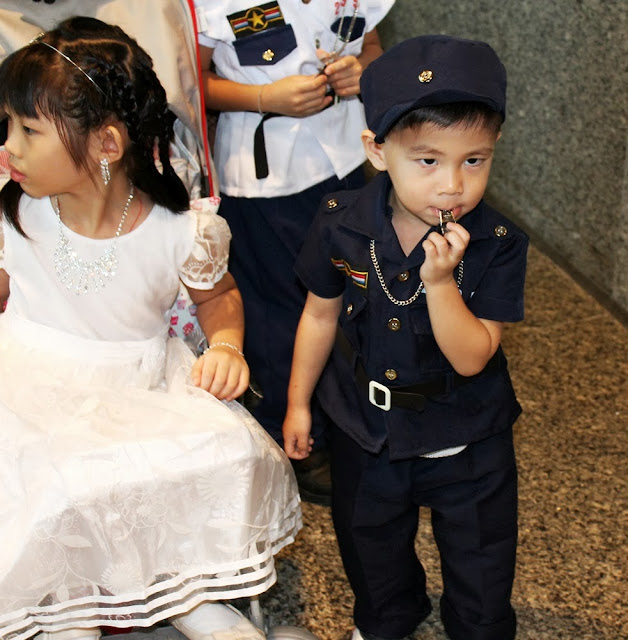 A family of cosplayers.

I assume the mother is a fanatic, and she brought her kids along into her passion! The maid in uniform is literally the family’s domestic helper as we were told. So I thought this was pretty impressive! 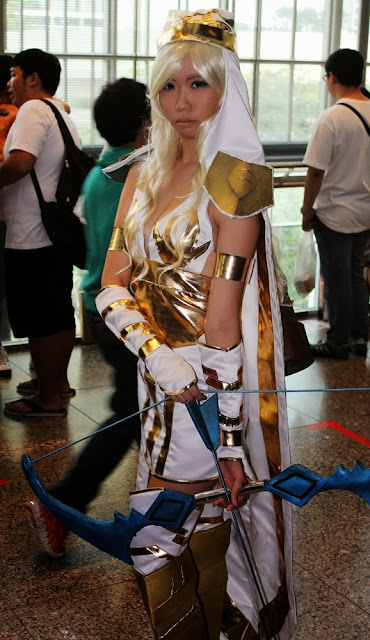 No idea who she is but nice bow, lady. 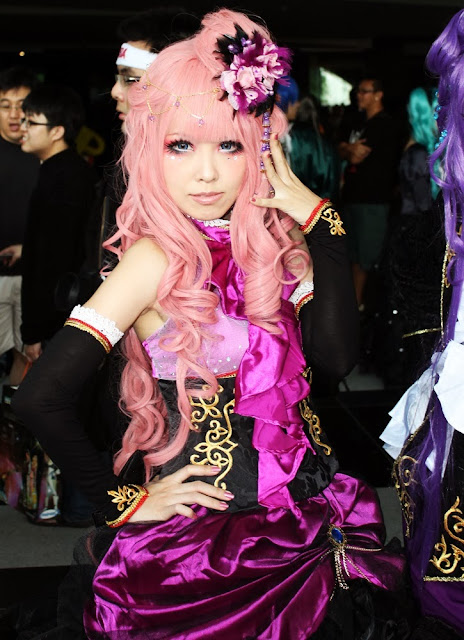 Possibly the most exquisite creature there.

She got into pose so naturally and her hands immediately knew where to position and her smile curved. And it was very sexy seeing an old pro do what she visibly does wonderfully.

I wanted her number sigh. 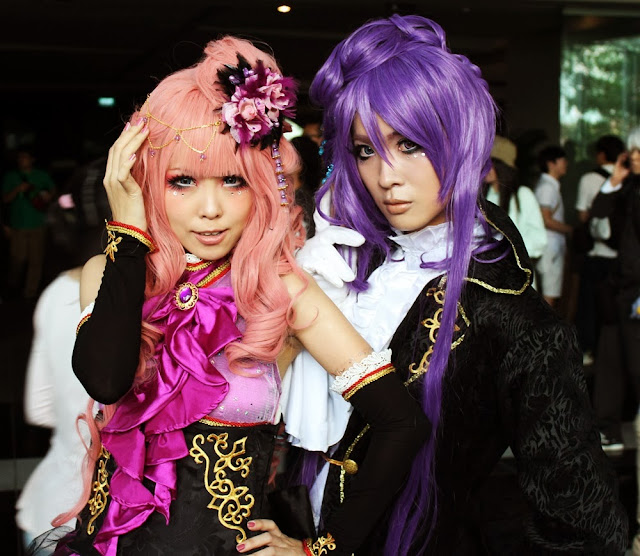 Here on, I went to find the friend of mine (mentioned above) who cosplays and I asked her thrice for the name of her character but I STILL CAN’T REMEMBER god I need a new memory drive.

But here she is in all her gorgeousness as Alois Trancy from the anime Kuroshitsuji: 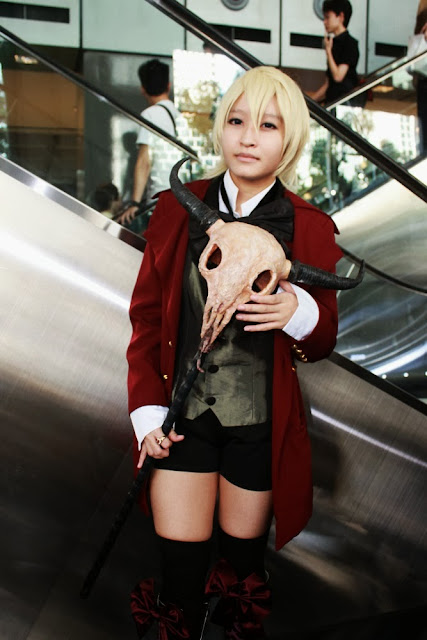 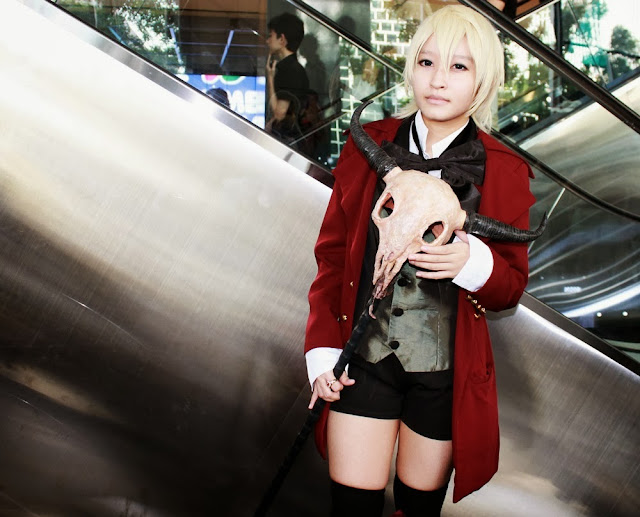 From her, I gleamed that most cosplayers tailor/ design/ handmake their own costumes. At first I was playing around (I poked her hair and asked how did she make it so real and she ignored me sigh), but then I got honestly amazed. 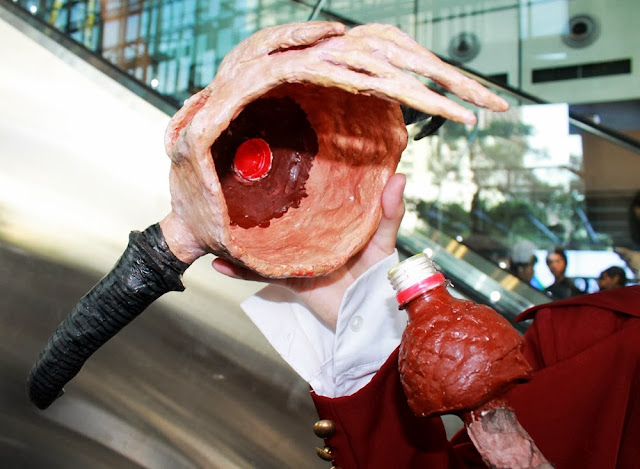 Her staff comprises of the top of a water bottle.

This is so she can detach the head anytime and hurl it at rude people like me when we take unflattering photos. It is also to secure the head tightly without excessive adhesive and I thought it was incredibly smart. 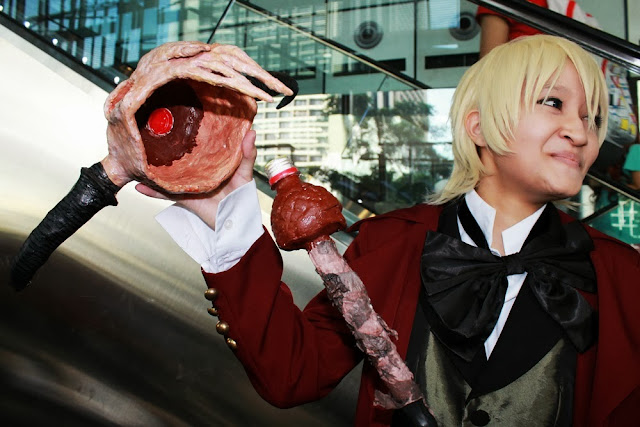 The ruffles at the top of the staff are toilet paper, glued then painted over roughly for this dishevelled effect. She used to be an art student back in our secondary school days and while I have made nothing out of it, she is apparently a goddess of props now.

I should probably go make my art more useful sigh. 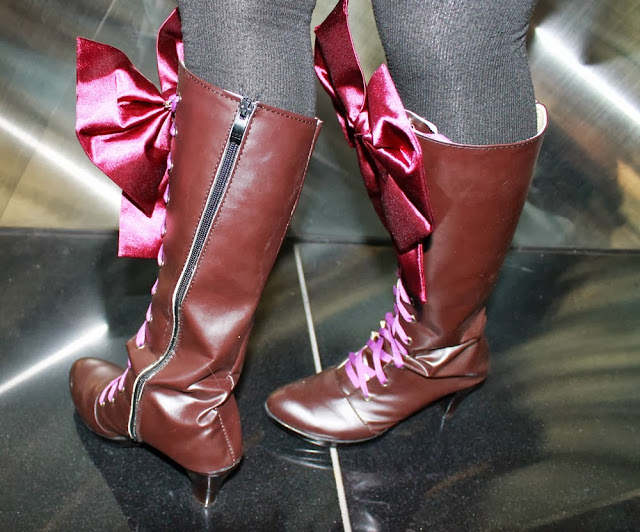 Her boots were too big for her, so she and her friend ended up cutting a portion of the boots and sewing it back up. It looks flawless to me so I’d say it’s a damned good job. 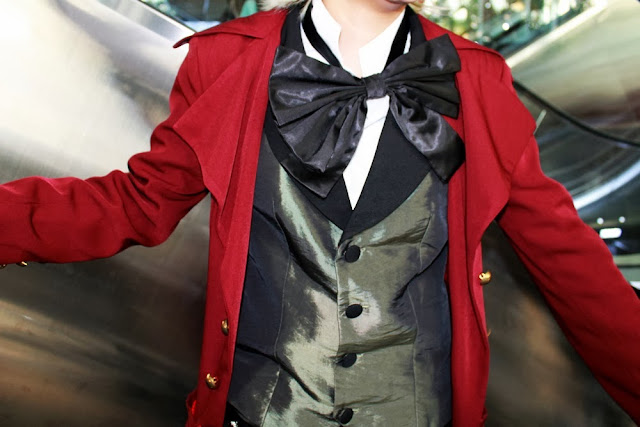 I am quite sure the big bow is from Daiso! 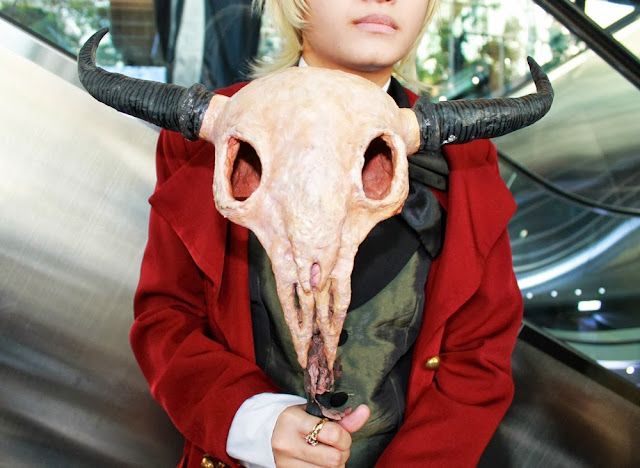 The staff head, molded entirely from clay and painted on over. I am incredibly impressed by the snout (?) and the hollow eyes of this. So much incredible detail, all handmade especially for this festival. 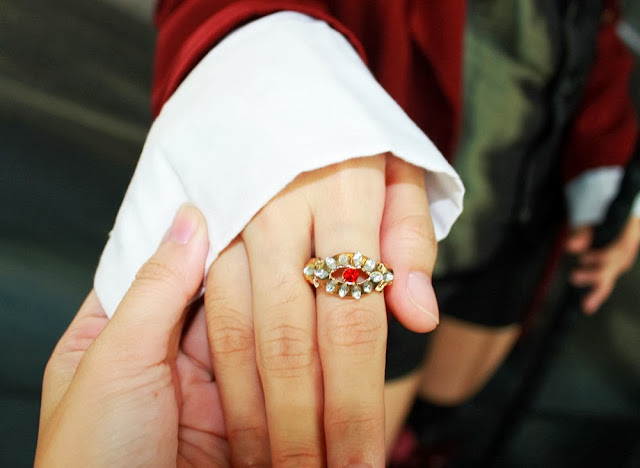 Shortly after my harassing her, she got approached by a dozen or so of photographers and she had to stand in position for a long time so I left! But I truly left with a new arsenal of knowledge.

I should’ve asked her for the total damage of her costume. I don’t know about the costume itself, but the entire staff was made of materials bought from Daiso so I think it’s genius.

A lot of $2 and a lot of talent can get you a staff like hers.

In a nutshell, what I have learnt from AFA is:

i) There are a lot of people who put in a lot of effort, let’s say, 30 days vs. 3 days of this event, and we must remember that while we’re only giving them a day’s attention, they’ve given their costume (probably) a month’s, so we must be extra appreciative.

ii) Most cosplayers hand make their own costumes.

iii) They have to stay in position if a slew of photographers happen to come by all at once and they cannot get out of character till the last photographer leaves.

iv) Cosplay enables them to delve into a character that may or may not be like them, but it is a reflection of what they read and this is their attempt at trying to be like their favourite anime.

Ask any of my friends and they’ll tell you my strong, anti-anime stance. I don’t touch anime, I don’t like anime, I find the whole idea of it a little cringe-y. So I had to force myself to this place.

And while I would still never cosplay, I have learnt that we all have different passions and just because mine differs, it doesn’t make theirs is any less honorable. 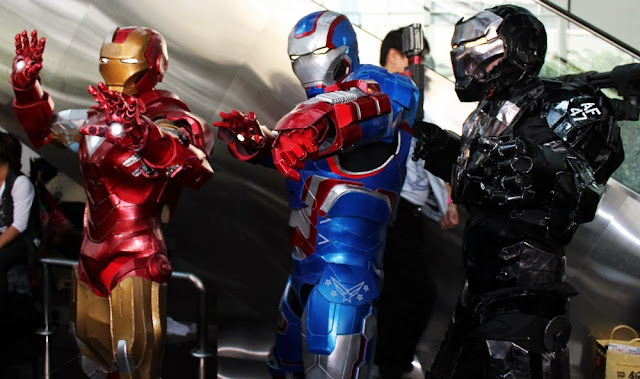 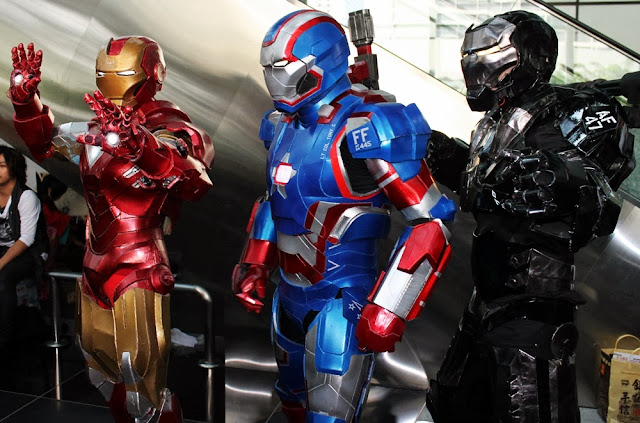 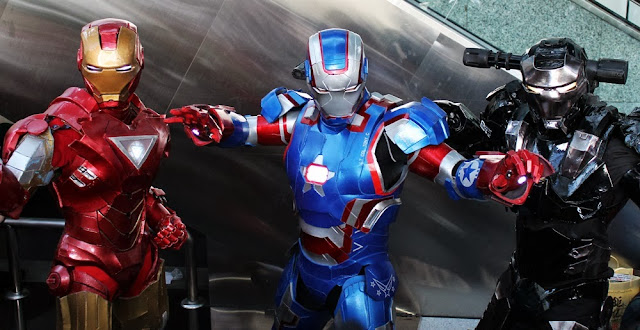 Finally a costume I recognize.

I need to add at this point that while I’m not the biggest anime fan, I am on a hopeless iv drip of american superheroes and greek mythology and you would find me at a Comic-con or some Greek-related convention stroking the abs of pseudo Hercules and the head gear of Loki.

So I truly do hope they come over soon to blow my mind heh heh heh.