“This year, I’ll get fitter” goes every New Year resolution I’ve made since the year 2000, and most have expired quietly after the first flush of excitement has worn off. As of now, my record not-so-proudly stands at the end of January.

But this year, instead of half-hearted #fitspo goals like a vague “work out more”, an innocent question from my colleague changed my couch potato destiny.

“Do you want to run 5km this weekend?” Sure, said my sleep-deprived, idealistic brain. And before I knew it, a glowing pair of adidas Solar Boost running shoes greeted me, my companion-to-be for the upcoming adidas Singapore Resolution Run.

About the adidas Solar Boost

My new BFF had good looks, no doubt about it. In an Ash Grey colourway (for women), with a pop of yellow, the adidas Solar Boost looked straight out of a HypebeastTM catalogue. 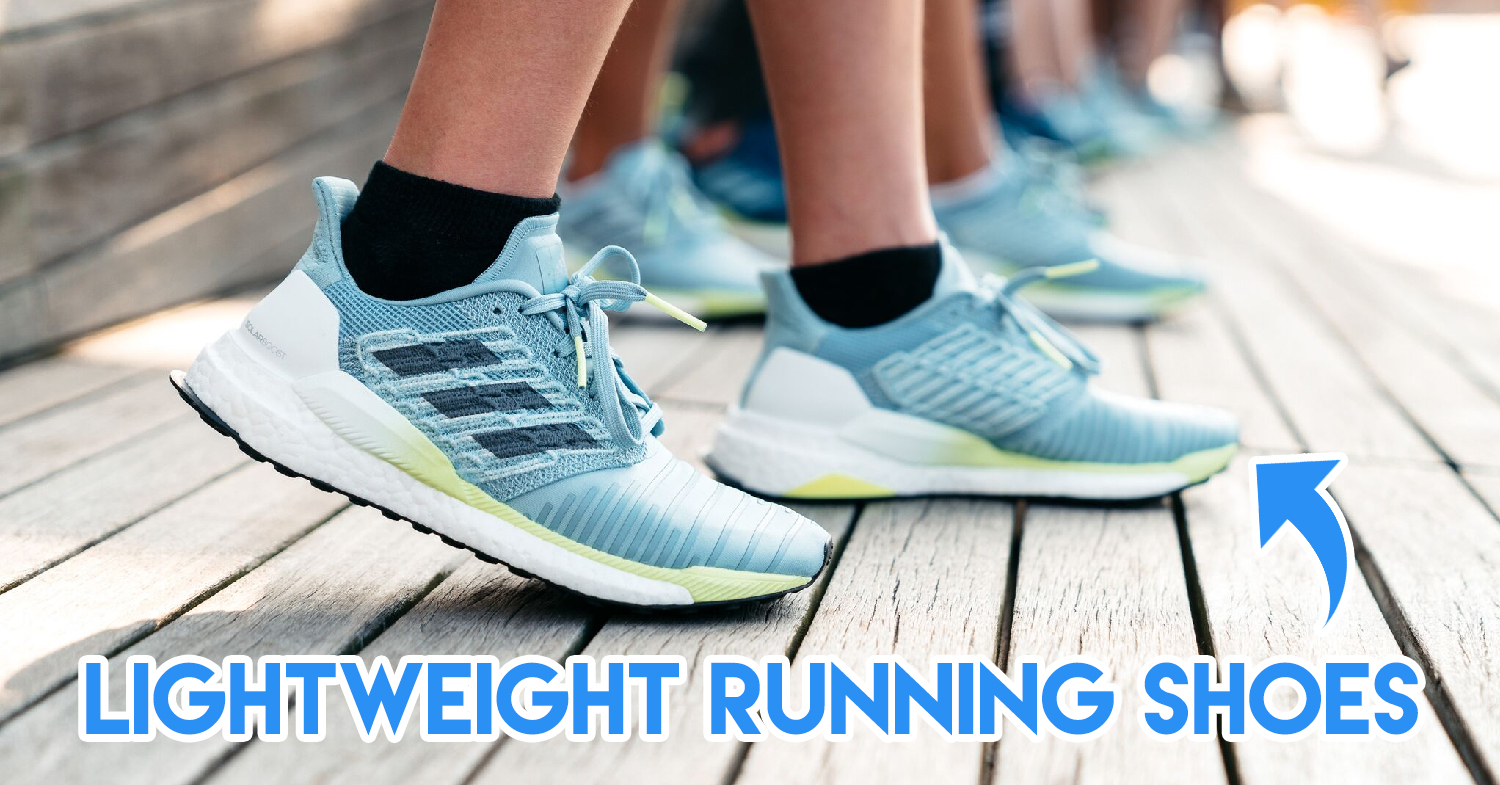 It was also intensely lightweight at a mere 295g. I could toss it up in the air with one hand with almost no effort! And it fit like a dream, with just enough room and zero chafing – so much so, I almost forgot I had it on. 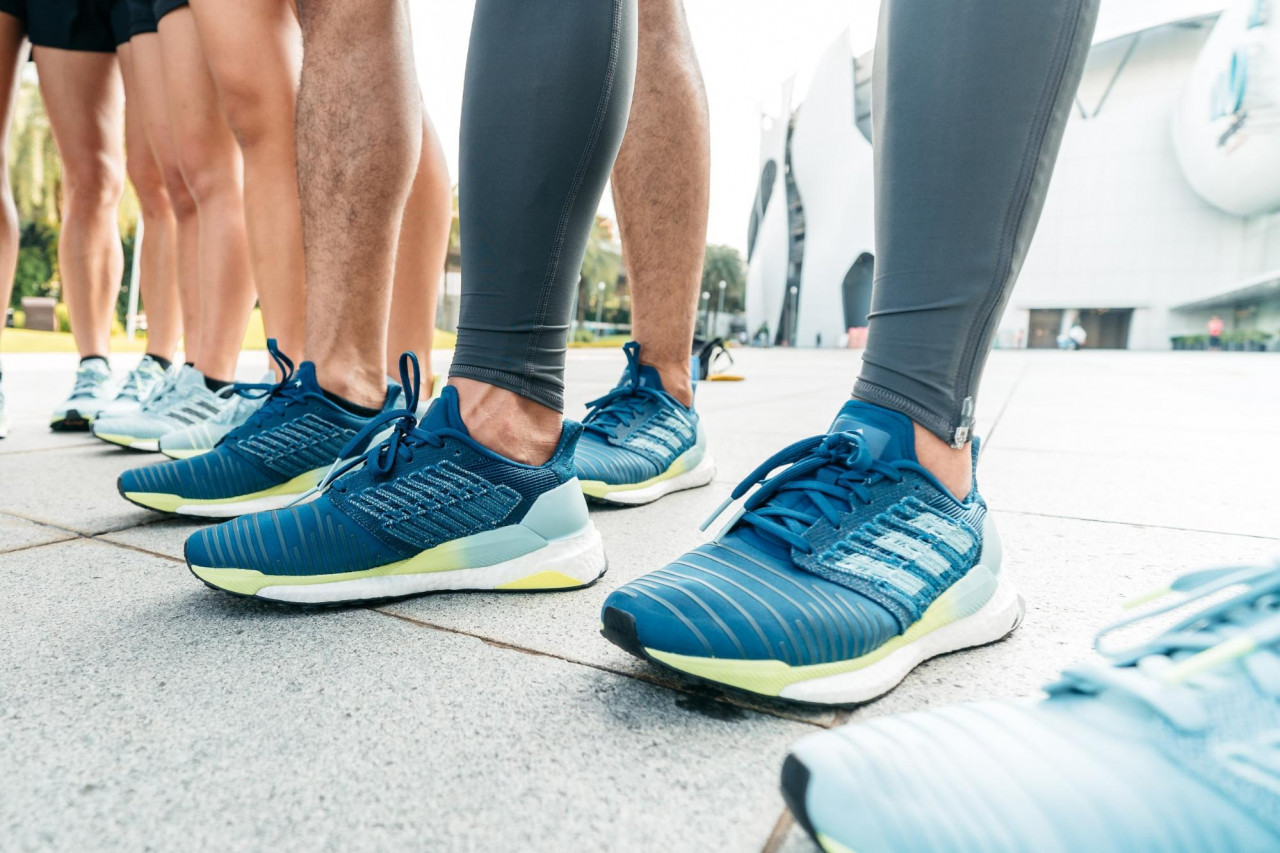 The shoes also come in a darker Marine colourway for men.

But what sealed the deal was the utter comfort of these kicks. Despite being brand-new, the shoes weren’t stiff at all and instead felt like a seasoned pair of shoes which moulded exactly to my feet. Turns out, that’s thanks to the Tailored Fibre Placement technology the Solar Boost is engineered with, which lays down fibres in the midfoot area for precise support, no matter the shape of your feet.

Review of the shoes at the adidas Singapore Resolution Run

7AM, Sunday. Instead of a comfy bed, the last place I expected myself to be at was at VivoCity, all set to conquer a “simple” 5km route with the adidas Runners Singapore community. No sweat, right? 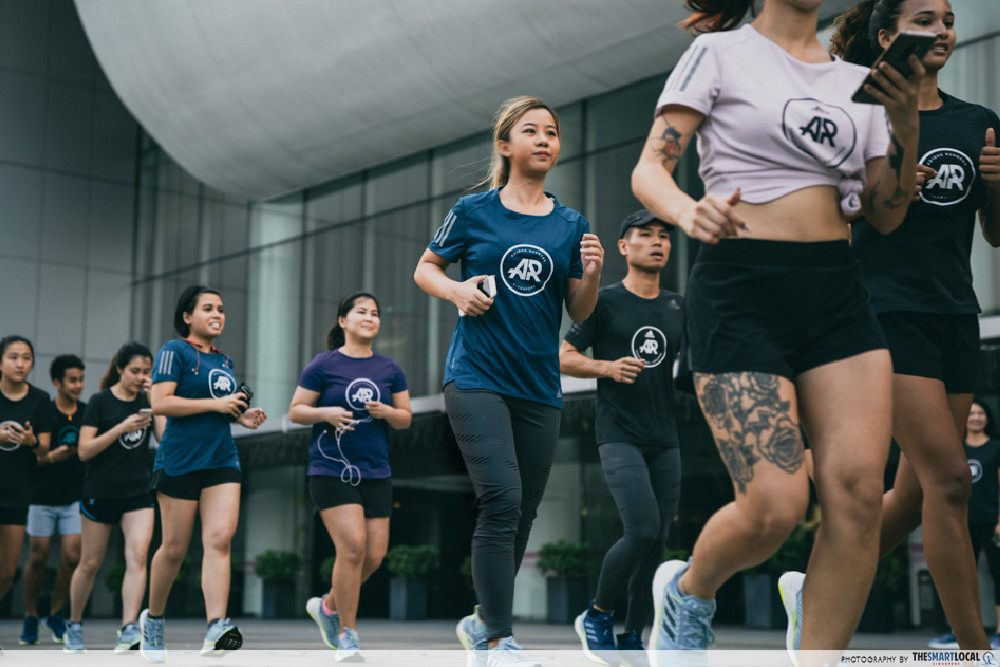 But after the warm-up, reality set in that this was not going to be a walk in the park. Our route was through the slopes of Mount Faber through Telok Blangah Hill, and we were set to conclude our run amidst the undulating Henderson Waves. 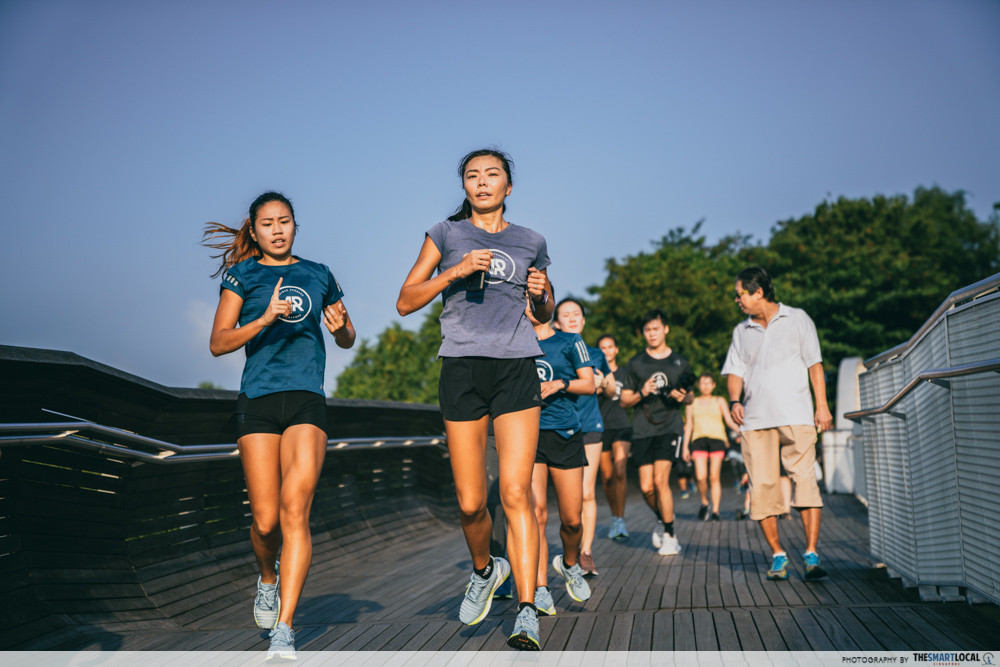 Let me just say that flat terrain treadmill jaunts are no match for the steep slopes en route to Mount Faber. And it was this point I felt grateful for the Solar Boost shoes – they hit the road gently and with plenty of bounce, making even strides up the dratted incline comfortable and not as muscle ache-inducing.

The springy midsole helped me keep pace with my fellow running peers all through the varied terrains such as dirt, roads, the wood-panelled Henderson Waves and even the steel platforms of the Forest Walk. 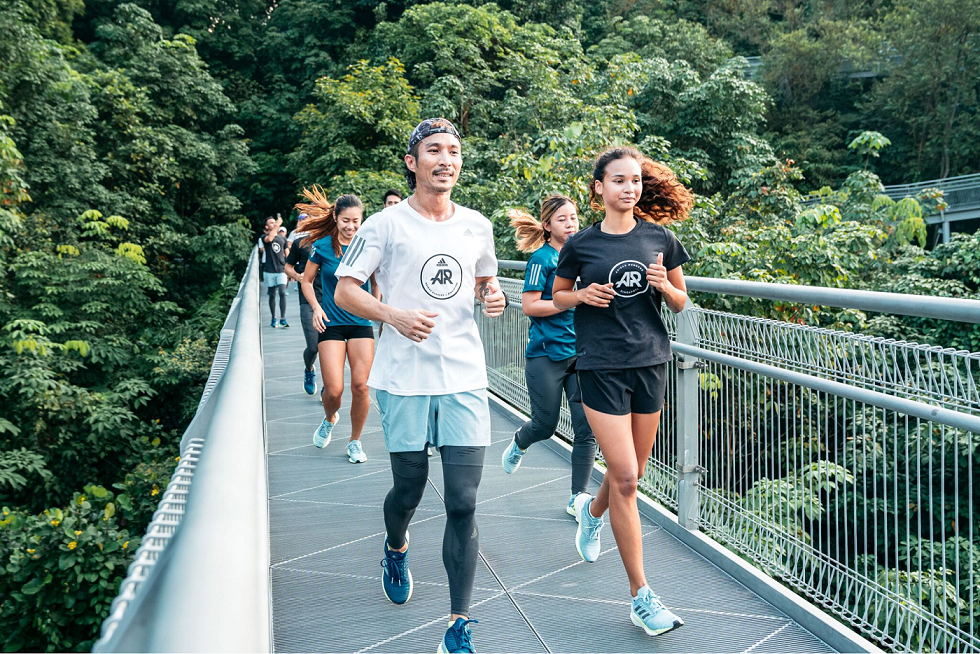 Also, as someone who has sprained my ankle before and had it give way suddenly even when walking, I was appreciative of the support the Solar Boost afforded – there wasn’t a single such incident that was pretty much routine on most of my other runs or hikes.

Many pants later, we crossed the finishing line! Though the run was considerably short, I felt accomplished and ready to conquer the whole world. Must be that runner’s high talking. But feeling just a wee bit closer to realizing my New Year Resolutions was something magical and empowering, and I could see how this could become a sustainable lifestyle. 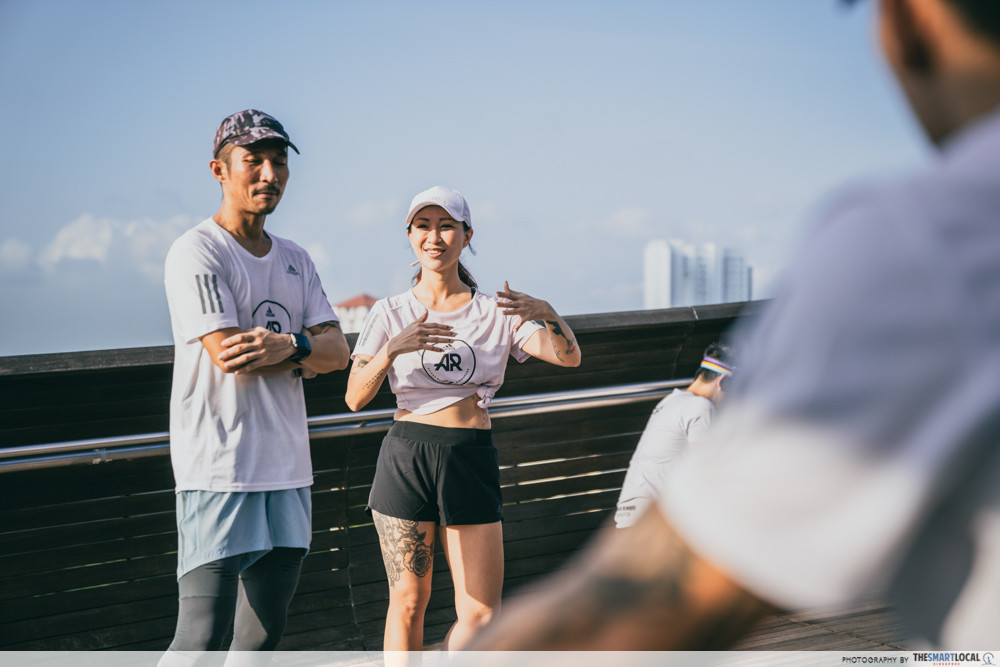 Riding on the high of having 2019 off to a good start, a few of us shared our New Year’s fitness goals too – like competing in the Boston marathon or even the S.E.A. games. Well, I’m not there yet but hey, baby steps to a “new me”.

Whether you’re a seasoned runner or a fresh-faced beginner, the adidas Solar Boost impresses with its lightweight, for-all-distances design. Despite my thighs burning up with fatigue, my feet never once felt clunky or weighed down. In fact, I hardly felt the shoes at all save for the comfortable cushioning, and the breathable material also meant no stinky post-run feet. 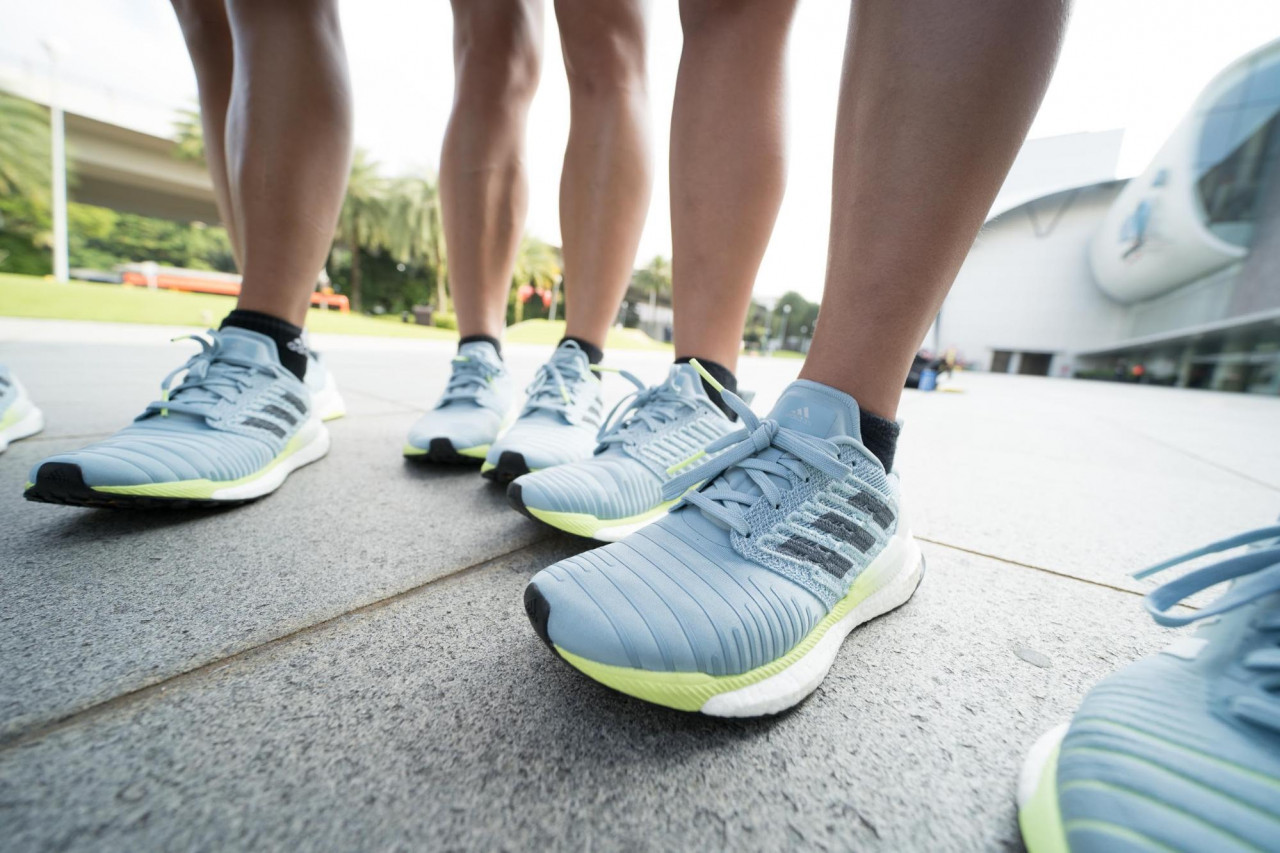 Even if you don’t intend to run a mile anytime soon, the sneakerheads among us will appreciate the sleek look of these kicks. These are miles away from your ultra-chunky shoes with weird panels and clashing colours. Instead, the soothing blue tones and fresh yellow make it stylish enough to transit straight from your run to daily wear – and make a statement to boot.

With style mileage and the extremely comfortable fit, I’d say the adidas Solar Boost is a worthy addition to your workout gear. Consider such a solid pair of running shoes as your secret hack to conquering those overdue resolutions of getting fit. Now, see you at the finish line of 2019!

Get your adidas Solar Boost in-store or online at adidas.com.sg.

Interested in stepping up your 2019 fitness game with the adidas Runners Singapore community? Join their Facebook group for more on their upcoming runs and activities.

Find out more about the adidas Solar Boost!

This post was brought to you by adidas. Photography by John Lim. 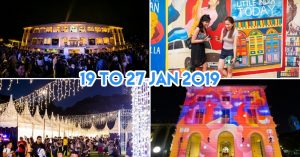 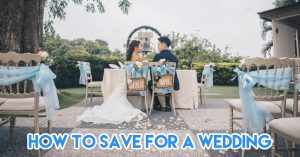