Eyes may be the windows to the soul, but a person’s face is undoubtedly the first thing that others notice, and the part of you which forms their first impression. Hence, you can only imagine how drastically a person’s self-esteem can be affected by the continuous presence of acne marring the complexion.

It’s not just dealing with a one-off or occasional breakout, either. Faith, aged 23, has been going through a bad bout of adult acne for close to a year now. The problem has crept in to impact facets of her life from job hunts to social media usage.

Here’s the tale of how acne can shake up a person’s confidence, and Faith’s journey of trying to tame her stubborn acne with a top-selling acne treatment product, ultimately regaining the confidence she was robbed of.

Faith had always associated the concept of acne with adolescence and puberty. So imagine the rude awakening she had when she experienced frequent breakouts and persistent pimples, well into what is meant to be the adulting stage in her life. 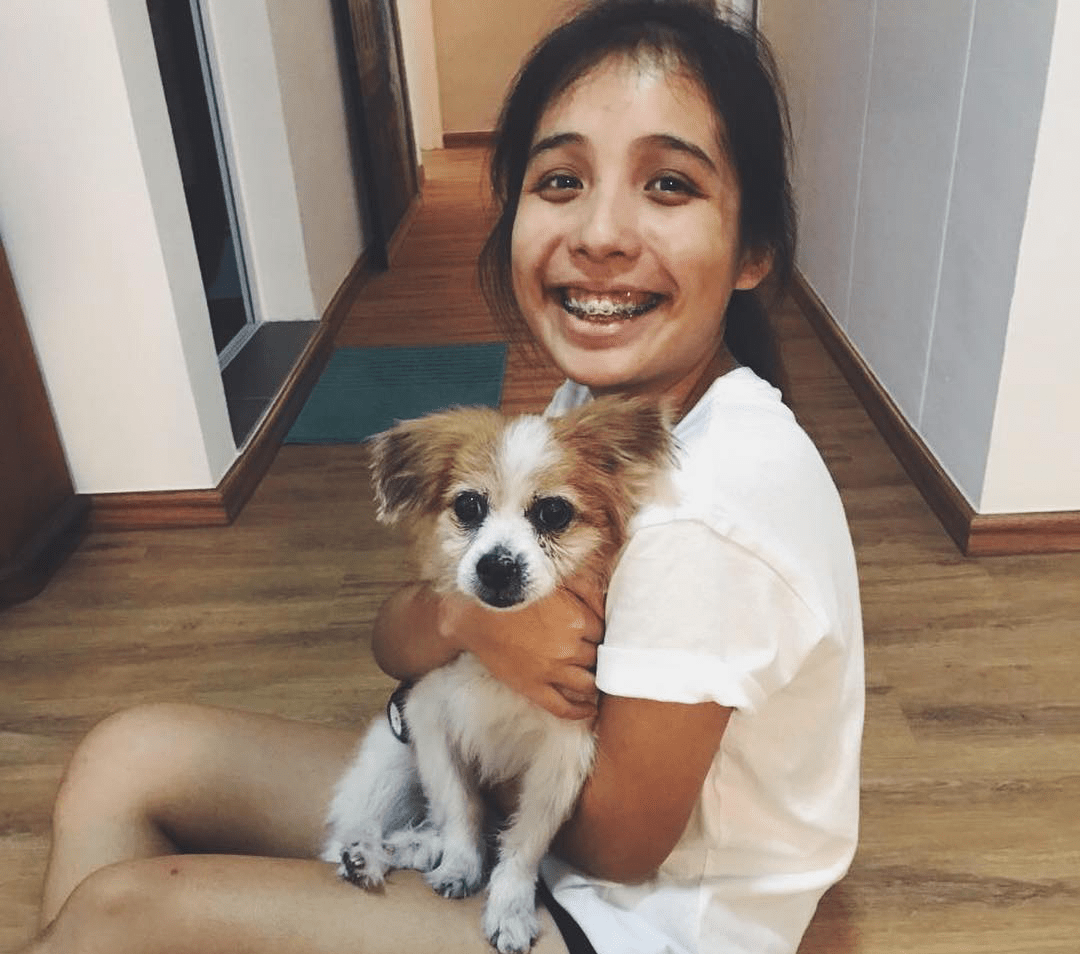 What made this fairly new condition an even bigger blow to Faith’s self-esteem was that she used to have clear skin pretty much all her life. When this flare-up of acne took over her face and showed zero signs of budging, despite her continuous efforts, Faith found it hard not to feel shaken up.

In furious pursuit of lasting acne solutions, she stocked up on various pimple patches and pimple creams. They were able to quell the ferocity of ripe pimples on the surface, but Faith noted the products’ limitations when it came to tackling the root of the problem: they weren’t able to penetrate into her skin and clear out the impurities, which led to frequent new breakouts. 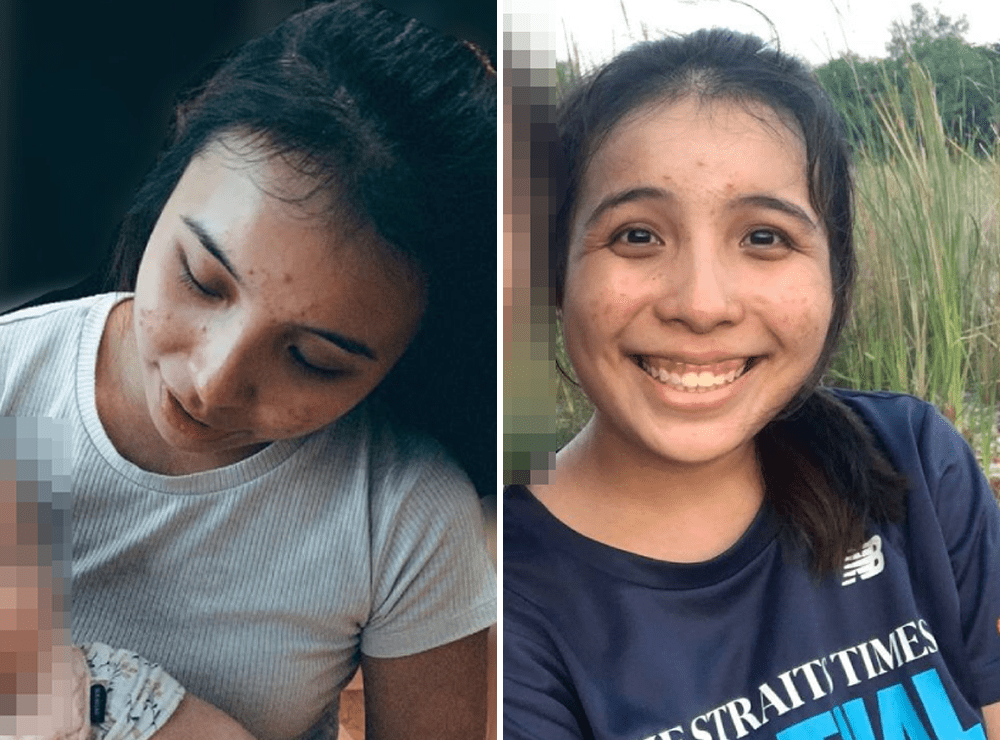 Although her pimple treatment products served as temporary fixes, Faith decided to just chuck them aside in an attempt to “let [her] skin heal itself”. When that proved futile, she kicked into overdrive and began researching acne at length.

Her newfound knowledge gave rise to the adoption of new lifestyle and hygiene habits, from the heightened diligence with which she performed her skincare routine, to the types of face masks she’d head out in.

For example, she found herself favouring disposable surgical masks because they were more breathable, as opposed to standard reusable masks which made her sweat up a storm.

The effects of acne on one’s self-esteem

The effort behind these small considerations in her day-to-day life paled in comparison to the way her acne affected her everyday mood and confidence levels. She admits, “While I knew in my head that we are all definitely more than what we look, I couldn’t help but feel that who I am is partly dependent on my appearance.” 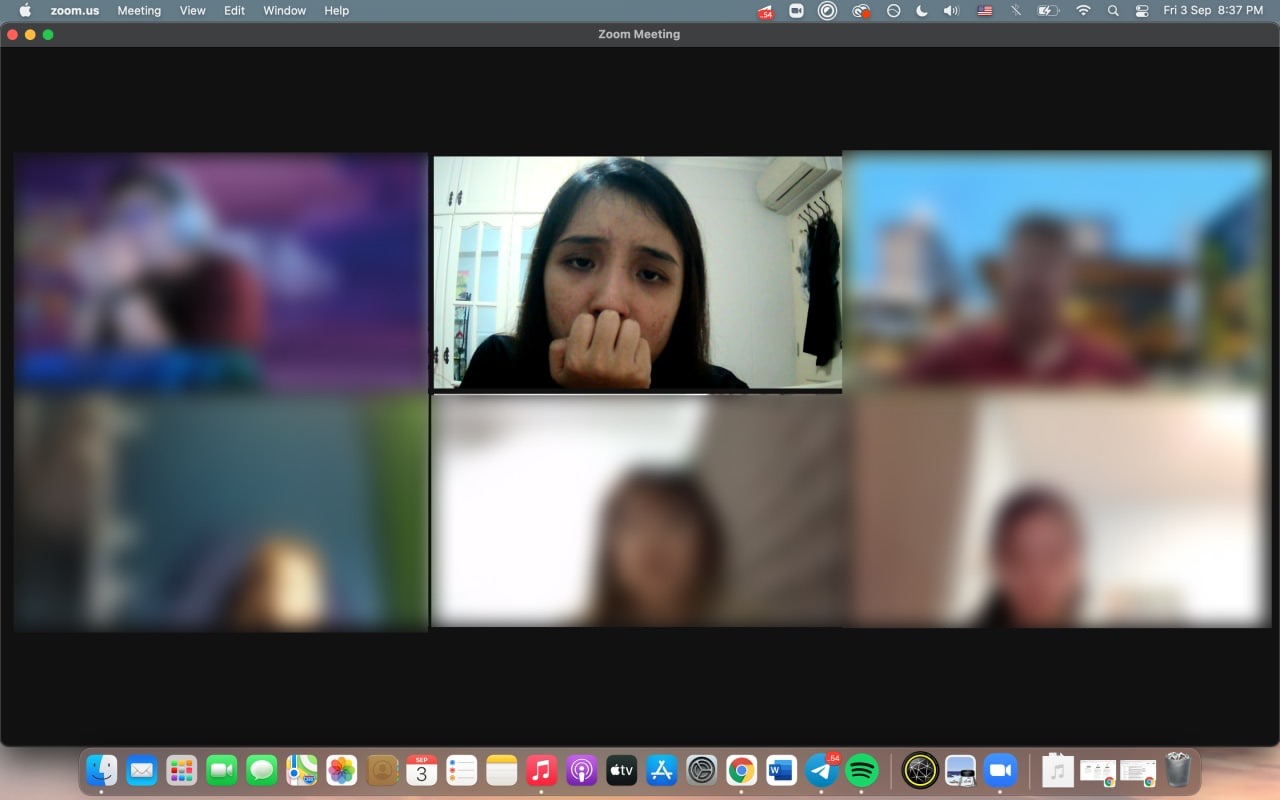 It didn’t help that we are now in the era of video call meetings. Imagine having to focus on meeting participants on the other end of the screen, when there’s a webcam view of your blemished visage right there in the corner.

It bugged Faith that the imperfections on her face were so clearly visible via the camera. And having gone through a job search this year with numerous video interviews, she couldn’t shake the thought that her visible acne might have affected the first impression for potential employers, including those who became her eventual colleagues. 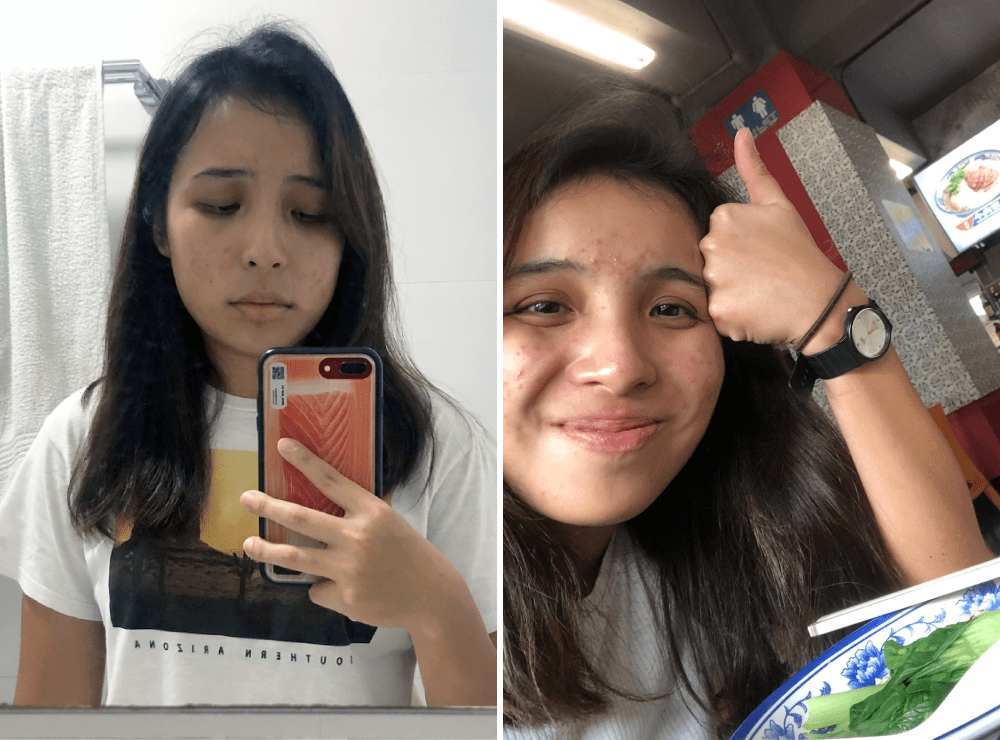 “I felt ugly”, she confessed point-blank. “Legit, when I see my reflection in the mirror or on my phone’s front camera, I’d sometimes get a shock from how bad I look. I felt bad for the people who had to look at my face, whether it was through a video call, or when I removed my mask to have a meal with them.”

Dealing with acne – How she coped with the everyday struggles

Unable to rid herself of acne for good, Faith turned to a myriad of workarounds that she never even had to consider during her clear complexion days. 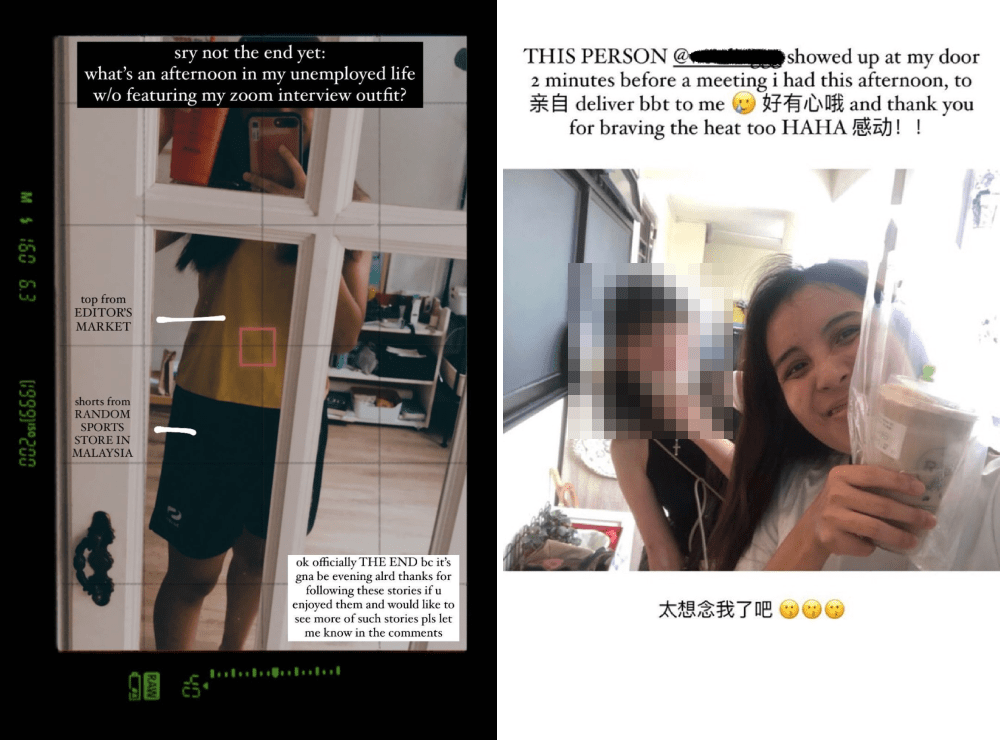 These included making use of video filters on Zoom to make her acne marks less prominent, and strategically angling her face during video calls to conceal patches of inflamed pimples. She even found herself cutting down on photos and videos posted on social media, so that her followers wouldn’t see her acne in its full glory.

One incident that had her particularly shooketh is when she bumped into an acquaintance in public. Because Faith was donning a mask, only the area above her nose was exposed. Upon initial greetings, this acquaintance callously asked, “What happened to your forehead?!”.

Already battling with major facial insecurity, Faith left that encounter feeling completely thrown off guard. As she puts it, “The last thing I needed was another reminder that there’s something “wrong” with me.”

Armed with a “nothing to lose, everything to gain” attitude, Faith was given the opportunity to take La Roche-Posay‘s Effaclar Duo(+) for a spin.

This treatment moisturiser is specially formulated to not only treat acne-prone skin, but get to the root of the problem and prevent new breakouts from emerging. Its multifunctional make-up combats blackheads, pimples, acne marks, and stubborn scarring. 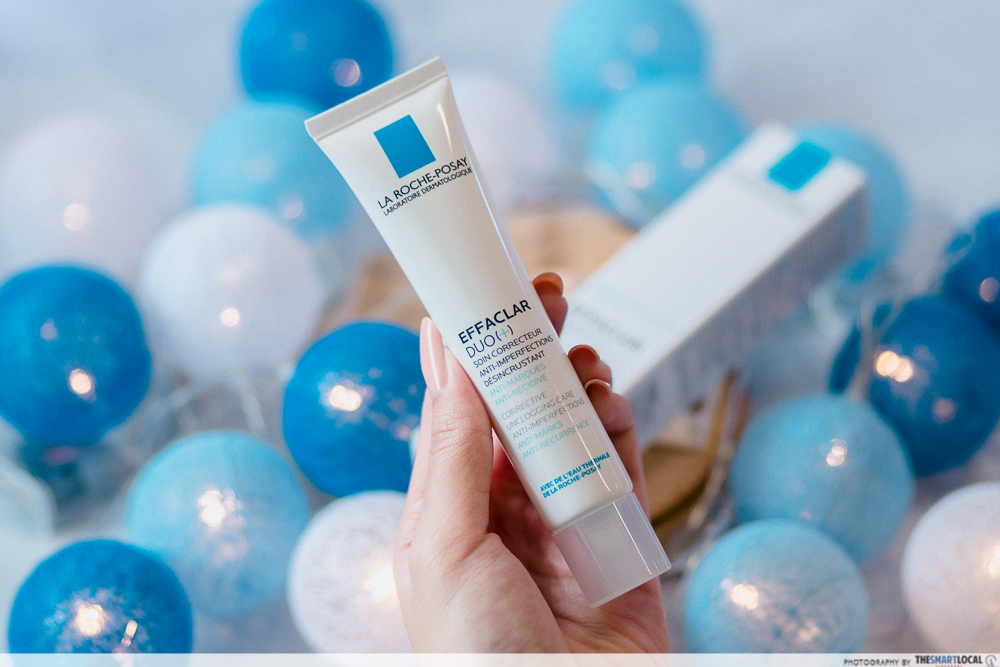 Called Effaclar Duo(+) because it’s dual-action, the product is meant to be applied on the full face daily, instead of only on pimples and breakouts as and when they appear. This allows the user to treat existing pimples and soothe inflammation, and keep new breakouts at bay at the same time. 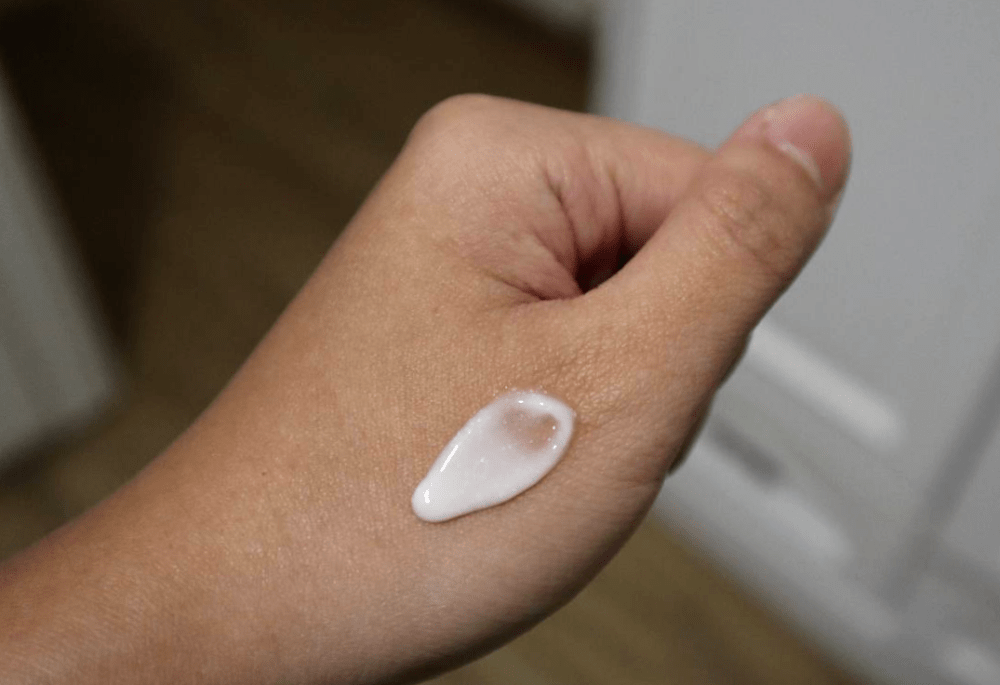 It has a gel-cream texture to give you the best of both worlds: potent enough to get the job done and deliver long-lasting hydration, while remaining lightweight and non-greasy unlike thick and heavy creams. Faith particularly enjoyed how light the texture was, being able to seep right into her skin without leaving a greasy residue behind.

The product works by:

Even at the halfway point of Faith’s two-week trial, the overall condition of Faith’s acne appeared significantly less red and “angry”. The marks and scarring also seemed to have faded despite the short seven-day usage period. This led to the texture of her skin looking and feeling more refined overall. Her forehead acne, in particular, was greatly reduced and looked significantly less blemished. 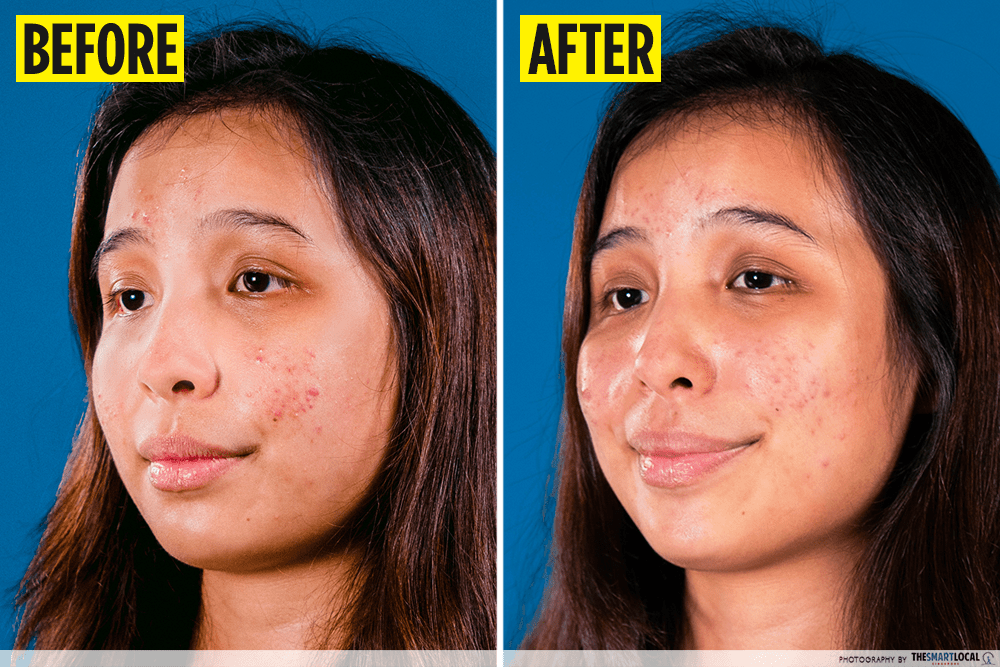 Before and after results after two weeks

For the final result after 14 days, Faith was able to report a marked reduction in bumpy, red and inflamed breakouts. Her existing pimples had “flattened” out to pave way for smoother skin texture, and her complexion also appeared brighter and more radiant on the whole.

Having been one of her most pesky problem areas, Faith’s forehead managed to clear up. There were no new major breakouts on the scale of what she had grown accustomed to, just the occasional little spots which take way less time to heal. 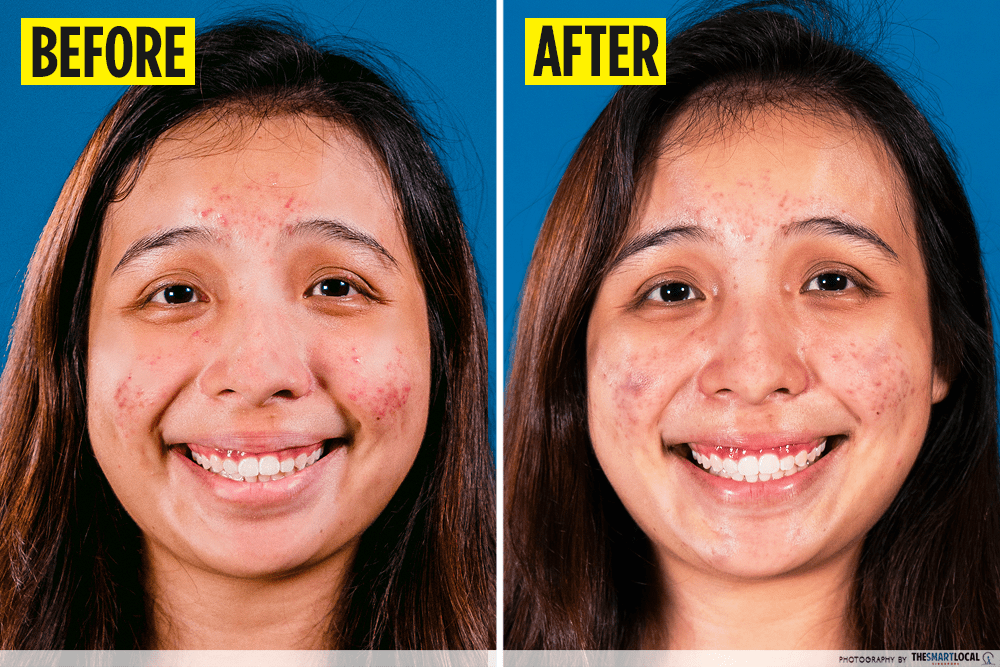 Before and after results after two weeks

Her past acne marks and scars left behind have also started to fade. Anyone who has battled with acne would be able to relate to how much of a relief this would be for Faith. Acne is pretty much a seemingly unending cycle of suffering constant breakouts, trying to cope with leftover scars, and knowing there’ll be more scars accumulating on one’s precious visage.

Needless to say, this can take a toll on one’s self-esteem and psyche, impacting day-to-day life since it literally prevents acne sufferers from putting their best face forward. But if Faith’s results after just two weeks are anything to go by, consistent usage of the La Roche-Posay Effaclar Duo(+) could spell light at the end of the tunnel for acne sufferers.

Introducing this product into her daily routine has led to visible results in just two weeks, giving Faith’s confidence a welcomed boost. For someone who had already started gotten used to living with recurring acne and dreaded even walking past the mirror, the small action of applying Effaclar Duo(+) daily was able to change her outlook on life for the better.

From her days of waking up with dread to examine any new breakouts or worsening of existing pimples, Faith is now able to feel relief and excitement when she checks for healing progress each day.

It’s a journey that’s undoubtedly heartening. And now that she has found a product specifically made to target the root of her skin problems and give it ample care and protection against furious new breakouts, Faith no longer feels like she’s a state of helplessness – at the mercy of her temperamental skin. If you face similar struggles with acne, give La Roche-Posay’s top-selling and highly-rated dual-action treatment moisturiser a go. The product was formulated specifically with acne sufferers in mind. Battling acne is a journey that is oftentimes not linear, and can feature plenty of setbacks or unmet expectations which lead to continuous frustration.

That said, no more sitting around letting persistent breakouts and prominent scarring put a damper on your quality of life. It could potentially rid you of your acne woes in the long run, so it’s certainly worth a shot.

Effaclar Duo(+) is available at Watsons and Guardian outlets nationwide, as well as online via Watsons, Guardian, Shopee and Lazada. La Roche-Posay will also be offering product samples while stocks last, so you can give it a try and get a sense of the results to come.

This post was brought to you by La Roche-Posay.
Photography by Pichan Cruz & Clement Sim. 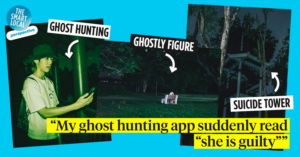 I Went Ghost Hunting At Pasir Ris Park's Most Haunted Spots & Here's What I Saw
Swensen’s Now Has Crunchy “Fried Chicken” Ice Cream & It Looks Just Like The Real... 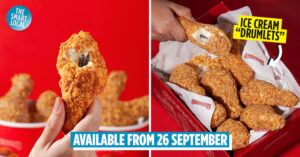