Groupons have been very popular in Singapore for awhile now but its important to shop smart so here is a list of the best groupon sites in Singapore. For those who are just getting in the groupon craze, here is some important information for you.

What is a Groupon?

The term Groupon is derived from “Group Coupon”. It was created in 2008 in the States and it has grown from a small niche into a full blown industry since then. For customers it makes use of “collective buying power” to get cheap prices/deals way below the market rate. The groupon sites act as a middleman where they promote and market businesses in return for commission. The businesses benefit from the exposure and new influx of traffic which makes up for their discounted prices, creating a win-win-win situation for all three parties – the customer, the business and the groupon site.

It typically involves “coupon deals” ranging anything from restaurant discounts to Holiday trips which can be bought during a limited time period (usually 1-2 days) at hugely discounted rates, but only if a minimum number of deals are bought. Because of the bulk purchases,  stores are able to give big discounts and the minimum quota is usually met.

How does it work?

Groupon sites earn a commission when they refer a customer and the businesses offering the groupon deal benefit from the exposure and traffic from the Groupon site. Often, its the not so popular places that have groupon deals which encourage people to try them. Some businesses also offer cheap groupons in the hope that they will make you a return customer or sign up with their membership packages after experience it. This is especially common in spas so be prepared to be uncomfortably pressured after using most group spa deals. To use groupons, usually you just need to print out the voucher they send you after payment which will have a unique code which you show to the store.

You should always pay attention to the fine print written in the deal before buying it. There is usually no “misrepresentation” but certain deals may only be available at certain branches or only on weekdays or only for a limited time period so make sure you are sure about the conditions first!

And of course with the success of groupon comes the competitors and clones, which isn’t necessarily a bad thing, competition always means better deals for us customers! There are now tons of sites floating around giving us so many choices! This is where this article comes in, where we show you the best 5 sites in Singapore so you aren’t flooded with information and can easily make the best choices! The early market movers Groupon (Previously Beeconomic), Deal.com.sg and BigDeal still sit comfortably in the top 3 of the food chain.

Lastly, remember you can go to their TSL page to read about experiences our members had in the reviews they have written after using these sites.

The top 5 ranked in approximate popularity as of 6 August, 2012.

Updated as of 18 Feb, 2013 to remove streetdeal after reading about its practices.

Deals aren’t categorised but they display a wide variety of deals ranging from shopping vouchers to food vouchers to TCM treatment packages. Although the site seems to be getting tons of traffic, its likely from their other portals. The deals bought are extremely low in quantity compared to the other sites but never underestimated the power having connections and purchasing power. inSing is the digital media arm of Singtel. Hence this site ranks just in the top 5.

The site specialises in offering big discounts, with most deals in the 50%-90% off range. Deals are categorised into Travel, Food, Wellness, Products and Events. There have been over 278,000 vouchers sold and $26 million dollars “saved” thus far.

Streetdeal was previously listed in this list because it had one of the highest traffic numbers for a groupon site in Singapore. However, based on our members reviews of it we feel its a site you should be avoiding. You can read more about their practices here. 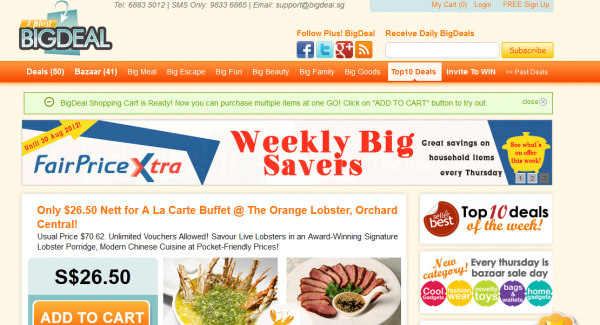 Set up by a group of friends with a common interest of finding the best deals in town. Deals are neatly categorised into Bazaar, Meals, Escapes, Fun, beauty, Family, Goods and Top 10. They have recently introduced a “Bazaar” section where the latest product deals are offered. Over $25 million dollars have been “saved” thus far.

Deals are categorised nicely into Travel, Products, Dining, Wellness, Activities and Bestsellers. They have also recently launched a new home delivery portal called http://dealivery.sg which allows you to order home delivery from different restaurants which usually do not have any delivery service! There is even Long John Silver and Subway on some days. A really awesome feature!

Previously known as Beeconomic, they started in May 2012 by two Singaporean entrepreneurs before being bought by groupon, groupon.sg is the biggest groupon site in Singapore. They have deals that last 1-2 days in 3 main categories, Visa Exclusive Deals, Shopping and Travel. The site also has a referral program and an account area where you can keep track  of all your referrals and deals bought.

Other Groupon Sites worth a mention 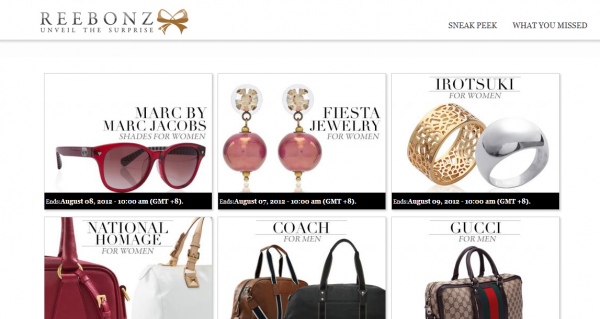 A fresh take on the “groupon market”, reebonz offers luxuxry items from brands such as Chanel, Prada and Coach at discounted prices in the form of limited time period sale events, only available to members. You have to join (for free) their site to see the offers and this site is a shopping haven for many of my friends! 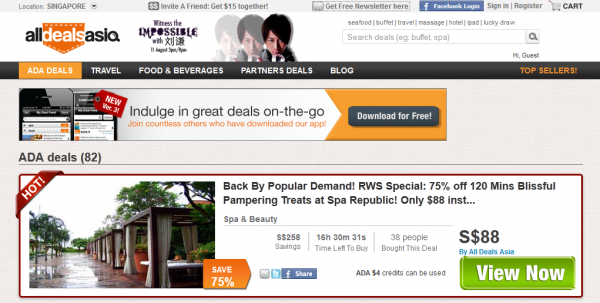 One of the few multi-region sites, this groupon site offers deals from all around asia! Categories are neatly sorted into just “Travel” and “Food and Beverage” deals. You can simply set your location to “Singapore” to just see all the deals available to Singaporeans. Its multi-region approach makes it one of the sites with the most potential.

Top 10 Rated Groupon sites according to our members

Did we miss anything? What are you favourite groupon sites? Let us know in the comments below! 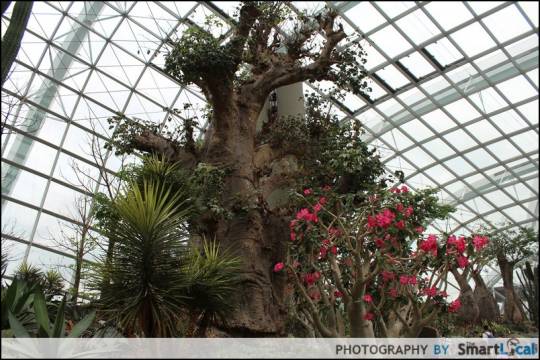 Gardens by the Bay with Panorama
We Are All Sponges