Our Lady of La Vang

For centuries, the world has heard numerous reports of people seeing the Virgin Mary appear. Most apparitions of the Virgin Mary have been reported in Europe, such as Lourdes in France and Fátima in Portugal.

Unbeknownst to many, Vietnam is also among the few places in the world where the Virgin Mary reportedly appeared to local believers.

In 1798, a group of Catholics in La Vang, Quang Tri Province, claimed that they saw the Queen of Heaven appear as they were praying in the jungle. This event was later referred to as Our Lady of La Vang.

Historical context of the Marian Apparition 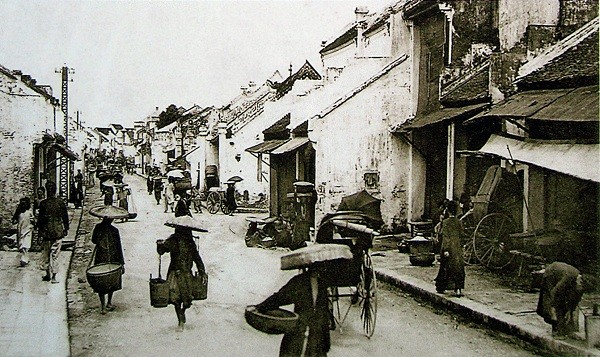 During the reign of Emperor Canh Thinh, Catholicism was becoming increasingly popular in Vietnam due to missionaries’ work.

Fearing that a “French-imported” religion would affect his ruling power and weaken the Vietnamese monarchy, the monarch was determined to eradicate Catholicism and proactively persecuted local believers.

Amid the heightened anti-Catholic climate in 1798, a group of believers fled to La Vang, a rainforest in Quang Tri Province.

According to popular belief, the term La Vang is originally derived from the word Lá Vằng, which refers to the leaf of a jasmine plant called jasminum subtriplinerve. Its leaves can be used to make herbal tea. 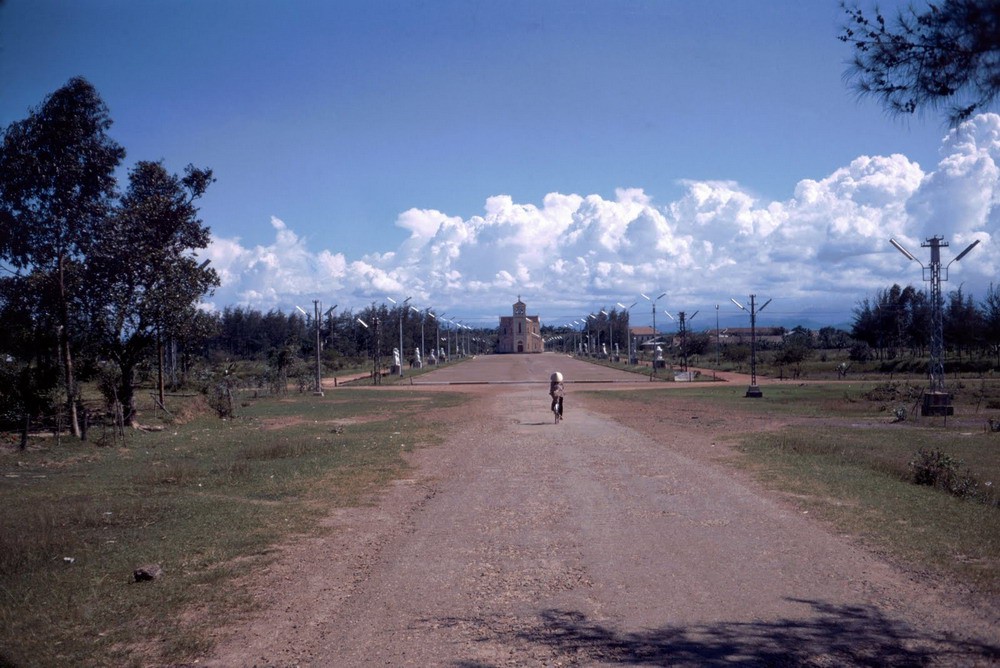 While taking refuge in the jungle, many people fell sick due to a lack of food and medicine. In spite of their infirmities, these believers gathered daily at the foot of a tree to pray the rosary.

One night, they saw a holy apparition as they were praying.

On the branch of a tree, a lady appeared, with two angels standing by her side. Clad in a Vietnamese ao dai, she was holding an infant in her arms.

The believers who were present at the scene interpreted the sight as the Virgin Mary holding the baby Jesus Christ. 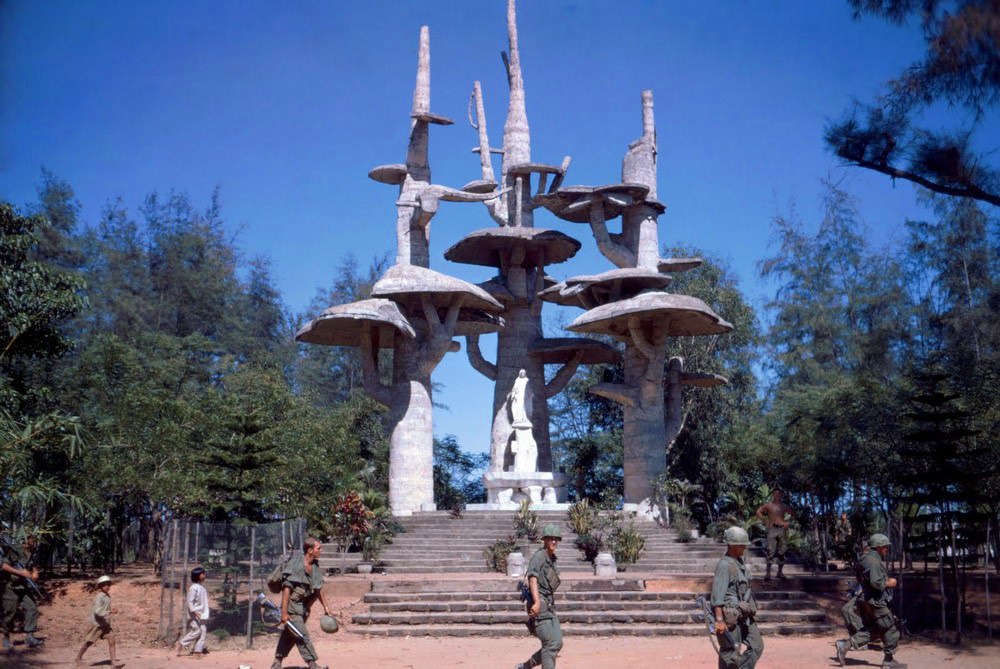 She gave words of comfort, “I have received your prayers. From now on, whoever comes here and seeks my help, I’ll answer their prayers and bless them.”

According to the witnesses, the Virgin Mary also advised them to boil leaves from the tree that she was standing on as medicine.

In 1802, these Catholics left the forest for their hometowns and told the story of the Marian Apparition in La Vang. After that, many people came to the site to pray the rosary.

To commemorate this event, local believers called the area where the Marian Apparition took place a holy shrine and built a chapel there in 1820.

Basilica of Our Lady of La Vang 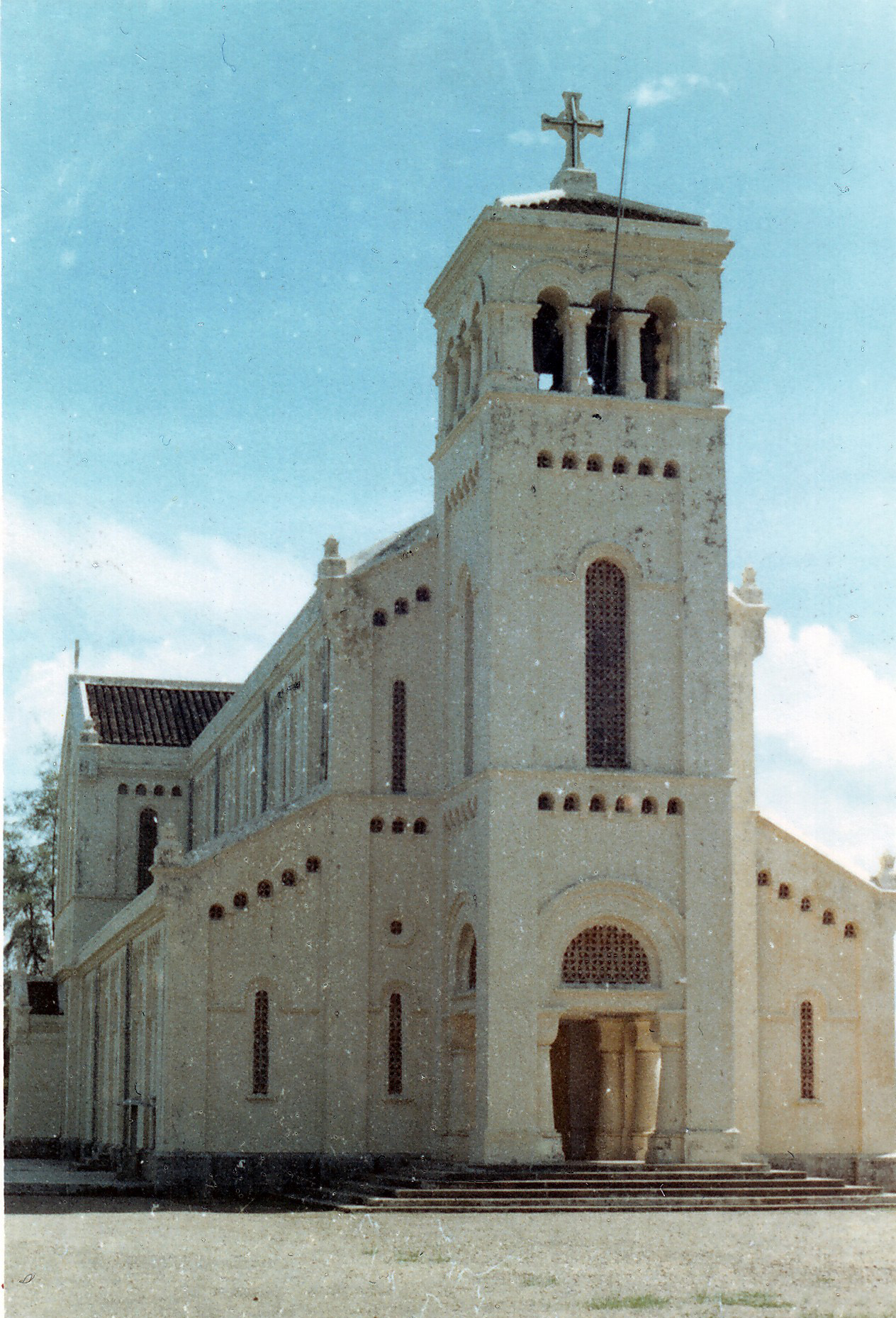 The Church of Our Lady of La Vang before its destruction
Image credit: Wikipedia

10 years following the establishment of the chapel, the tension between the Vietnamese imperial court and Catholics reached a new height.

From 1830 to 1885, persecution of Catholics took place across the country and a great number of priests were killed. The Catholic population was significantly reduced, and the Church of Our Lady of La Vang was destroyed.

In 1886, local Catholics rebuilt the church, which took 15 years to complete because of its isolated location.

On 22nd August 1961, Pope John XXIII made the church a basilica.

One of Vietnam’s largest Catholic sanctuaries 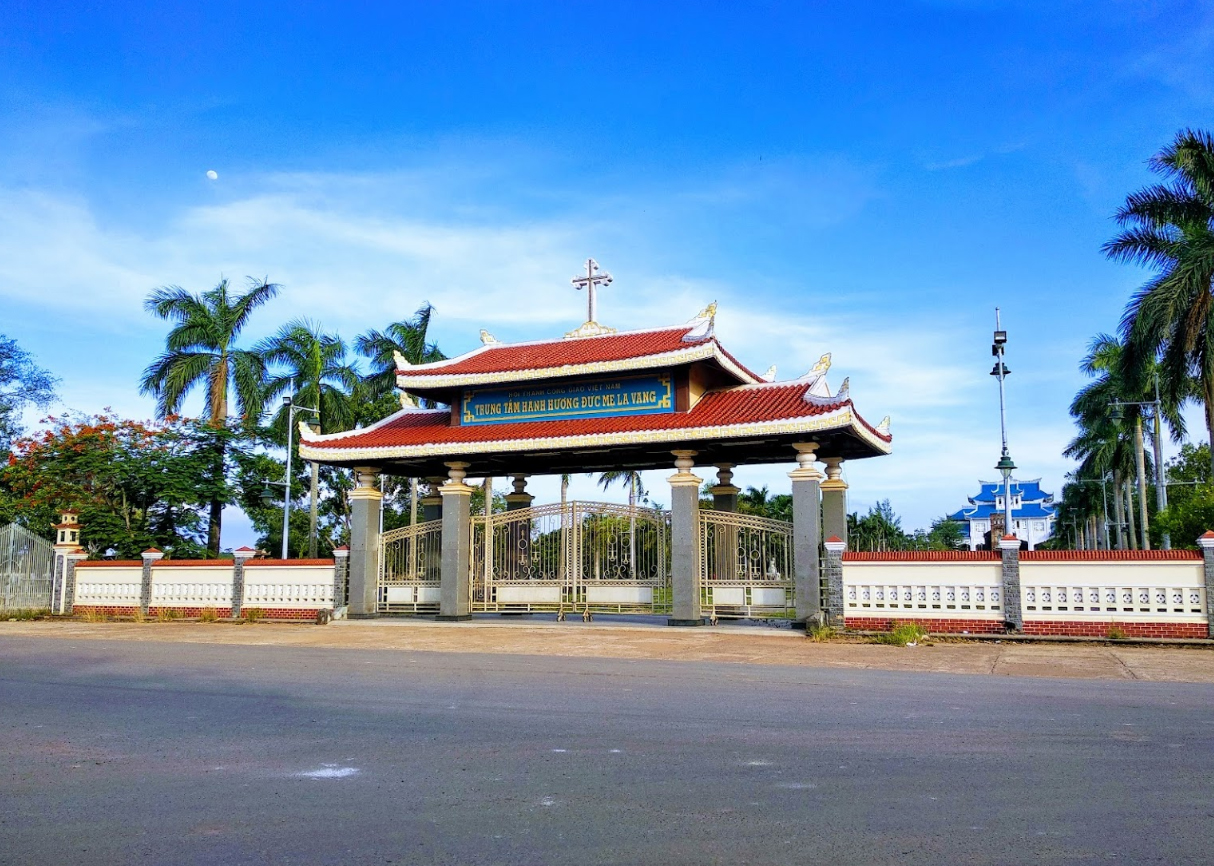 11 years later, the basilica was wrecked during the Easter Offensive of 1972. Only part of the bell tower remained nearly intact during the war. 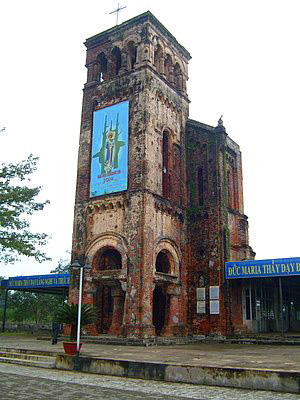 Though looking tarnished from age, the bell tower still retains its stately appearance.

In 1998, Pope John Paul II recognized the significance of the Marian Apparition at La Vang and expressed his desire to reconstruct the Basilica of Our Lady of La Vang. 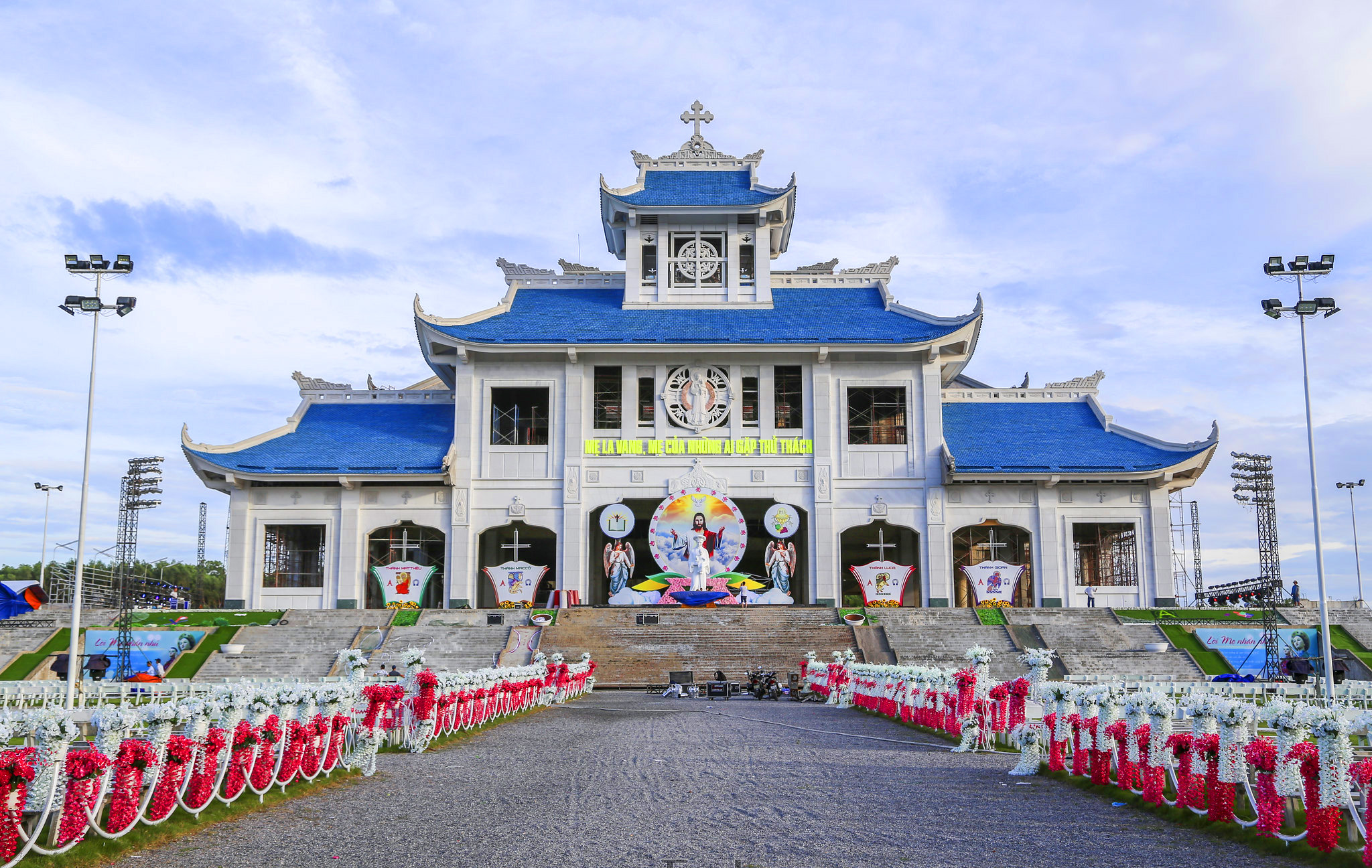 To provide pilgrims with a spacious and convenient worship space, local church leaders built a new chapel in 2012. Featuring a vernacular architecture with traditional hipped roofs, this chapel can accommodate up to 5,000 people at any given time.

In front of the bell tower is a spacious square, flanked by sculptures featuring the passion of Jesus Christ as well as Vietnamese martyrs. 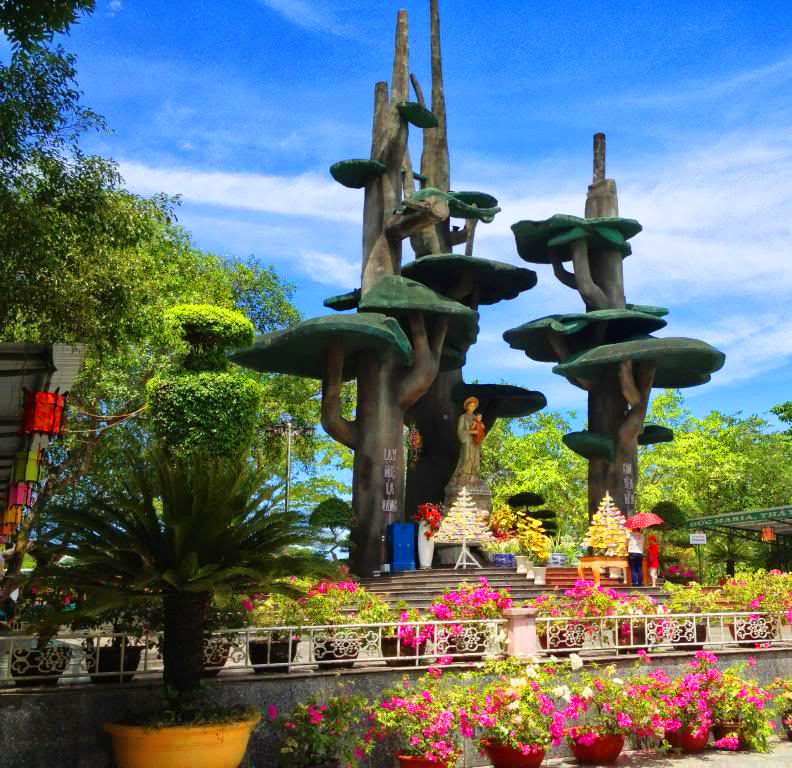 At the spot where the Virgin Mary reportedly appeared, visitors will find statues featuring 3 great trees with a statue of Our Lady holding baby Jesus Christ standing in the center. 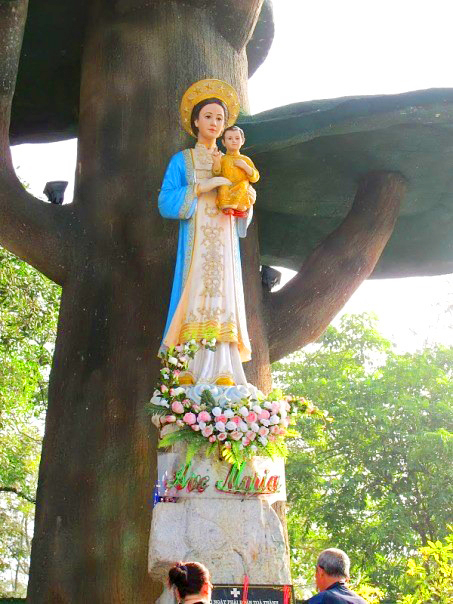 Inside the shrine, you’ll see a well with a sign that reads “Marian Well”. 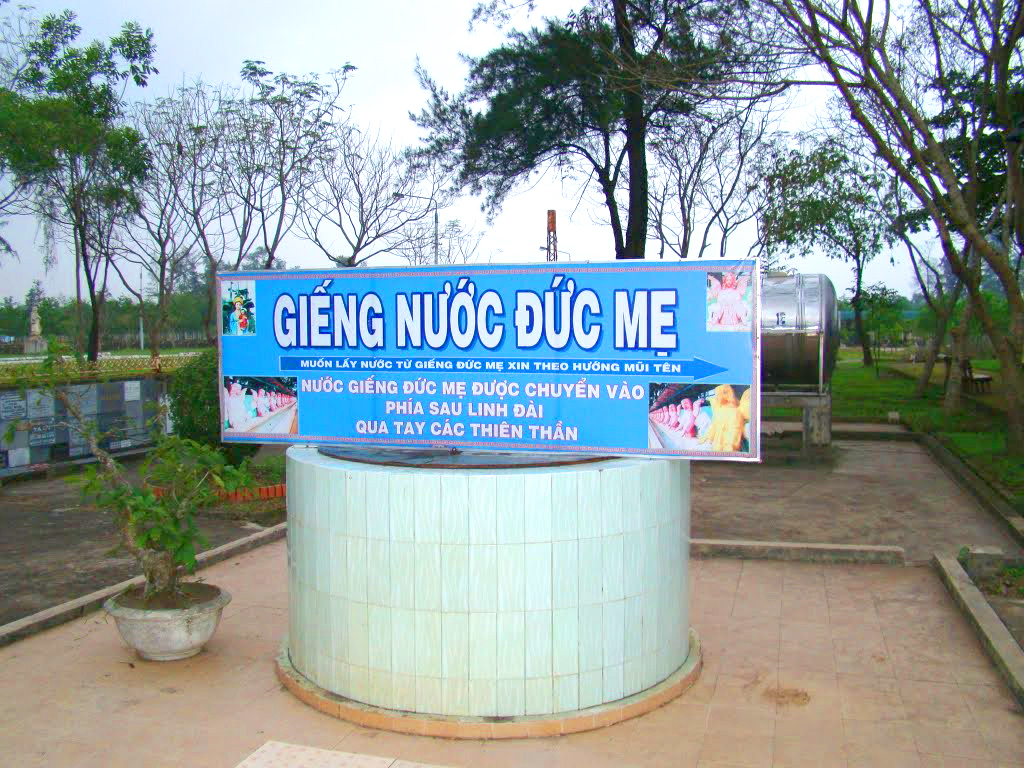 Many people who come here drink from the well to pay their respect to the Virgin Mary. They also believe that this water can cure illnesses. 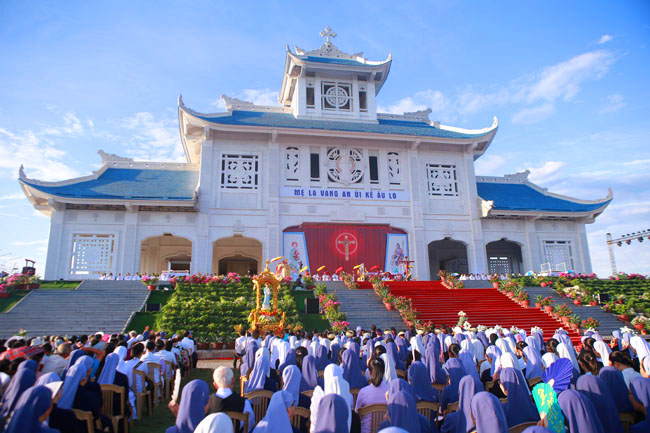 Today, the Basilica of Our Lady of La Vang has become one of the most significant Catholic sanctuaries in the region, drawing thousands of pilgrims each year. 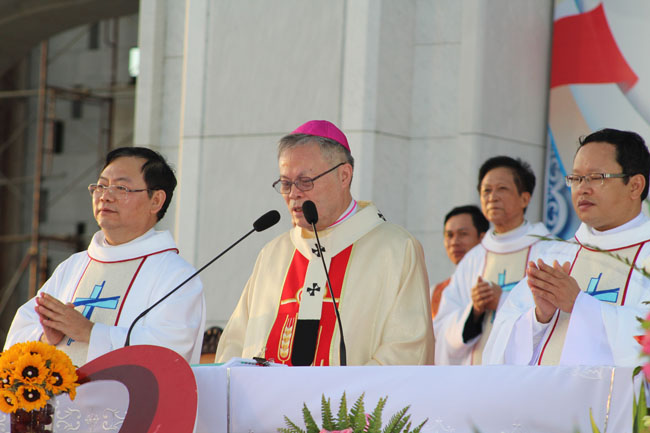 This is also one of the only three Catholic sanctuaries in the country recognized by the Vietnamese government. 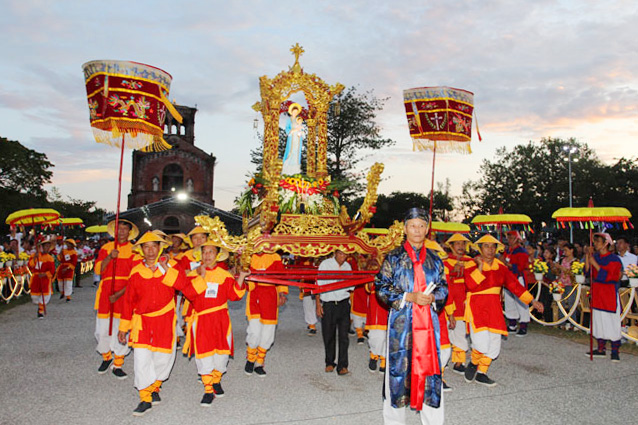 At the feast, visitors will find a solemn procession to commemorate the Marian Apparition at La Vang and join Catholic leaders and congregations in the recitation of the Holy Rosary.

After centuries of wars and destruction, plenty of historical sites in Vietnam have been destroyed. The Basilica of Our Lady of La Vang, a location of significant historic and religious meaning, was no exception. Nonetheless, local believers are still doing their best to preserve the remains of this sacred site and uphold its meaning with feast days and meaningful activities.

Not only is the story of the visitation of the Virgin Mary a crucial point of contact between faith and reality, but it’s also a monumental landmark in our country’s history. The holy shrine offers visitors a glimpse into the historic periods of a bygone era, and to Catholics a newfound appreciation for the hard-earned freedom in practising their chosen religion.

Hopefully, the holy shrine of Our Lady of La Vang will again see thousands of faithful pilgrims making their way to pay their respects once the Covid-19 pandemic is over. 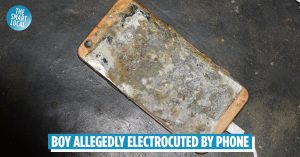 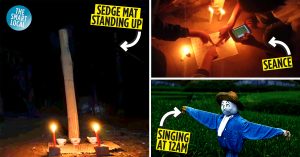