The story of the haunted Building 727 Tran Hung Dao

For as long as one can remember, the number 13 has gotten a bad rap as an unlucky number or the symbol of blasphemy. A great number of the world’s worst events and disasters involved number 13, from the Last Supper with 13 disciples to Australia’s devastating bushfire on 13 January 1939 to Costa Concordia’s 13 January 2012 shipwreck.

Believing that these events are no coincidence, lots of people have developed a fear of the number 13, also known as triskaidekaphobia. Hoteliers around the world understand this superstition, and many have tried to remove this number from their properties’ architectural designs or elevator systems.

That’s except for millionaire Nguyen Tan Doi, the owner of the then President Hotel in Saigon in the 60s. Whether or not it was true, his decision regarding the number 13 began a chapter of unceasing horrors inside his building from its commencement until demolition.

Also known as Building 727 Tran Hung Dao, this haunted location was steeped in history and mystery.

An architect’s warning that went ignored 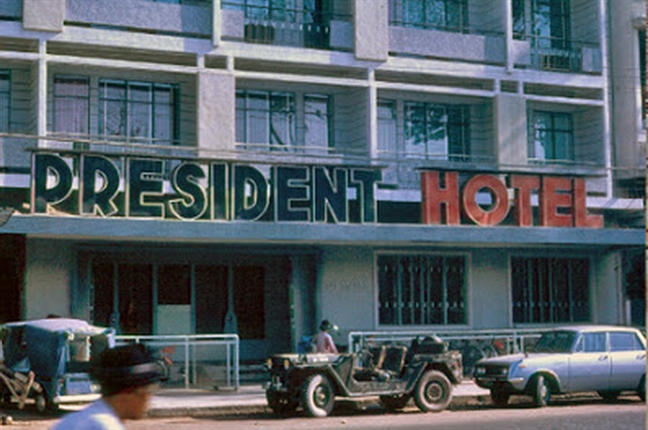 Before Building 727 Tran Hung Dao became a pile of rubble, it was a luxurious hotel and notorious entertainment hub in the last century.

Located on 727 Tran Hung Dao Street in District 5, the former hotel was built in 1960. This once opulent space was commissioned by Mr Nguyen Tan Doi, one of southern Vietnam’s richest people. 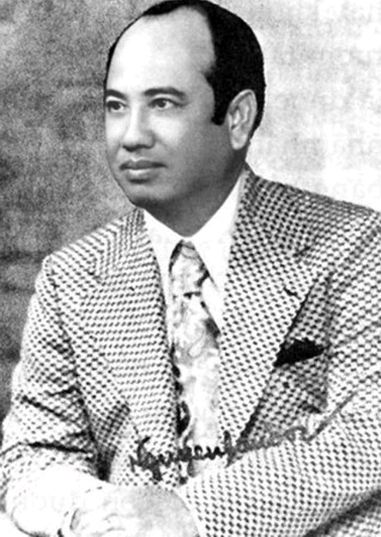 According to the original layout, the hotel had 13 floors and 530 rooms divided into 6 zones.

After receiving the design, the architect in charge, who happened to be French, expressed grave concern.

He told Mr Nguyen that the number 13 was believed to bring bad luck according to Western beliefs.

An Asian man as he was, the hotelier ignored the architect’s warning and decided to include a 13th floor. 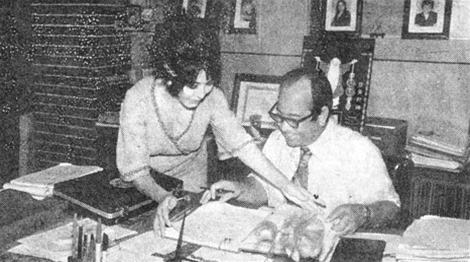 Nguyen Tan Doi was one of Vietnam’s richest people in the 20th century
Image credit: An Ninh Thế Giới

As it turned out, the making of the first 12 floors went smooth-sailing until the first bricks were laid on the 13th floor. 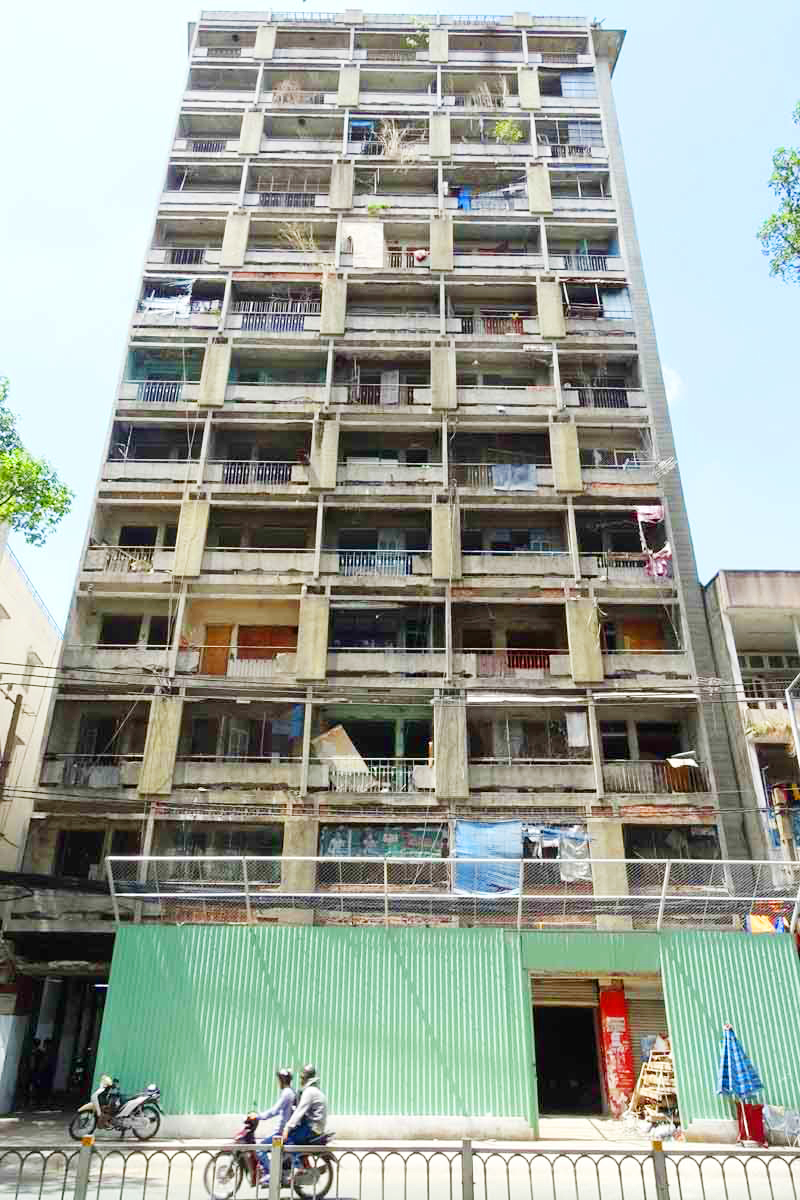 This building was demolished in 2016
Image credit: Vietnamnet

During the construction of the 13th floor, a series of fatal accidents happened. Some workers reportedly fell from the scaffolding while some got electrocuted. Accidents kept happening, making it impossible to complete the 13th floor.

Facing the risks of falling behind schedule as authorities were launching an investigation into his project, the frightened hotelier called off the construction for three days. Instead, he invited a ghostbuster over. 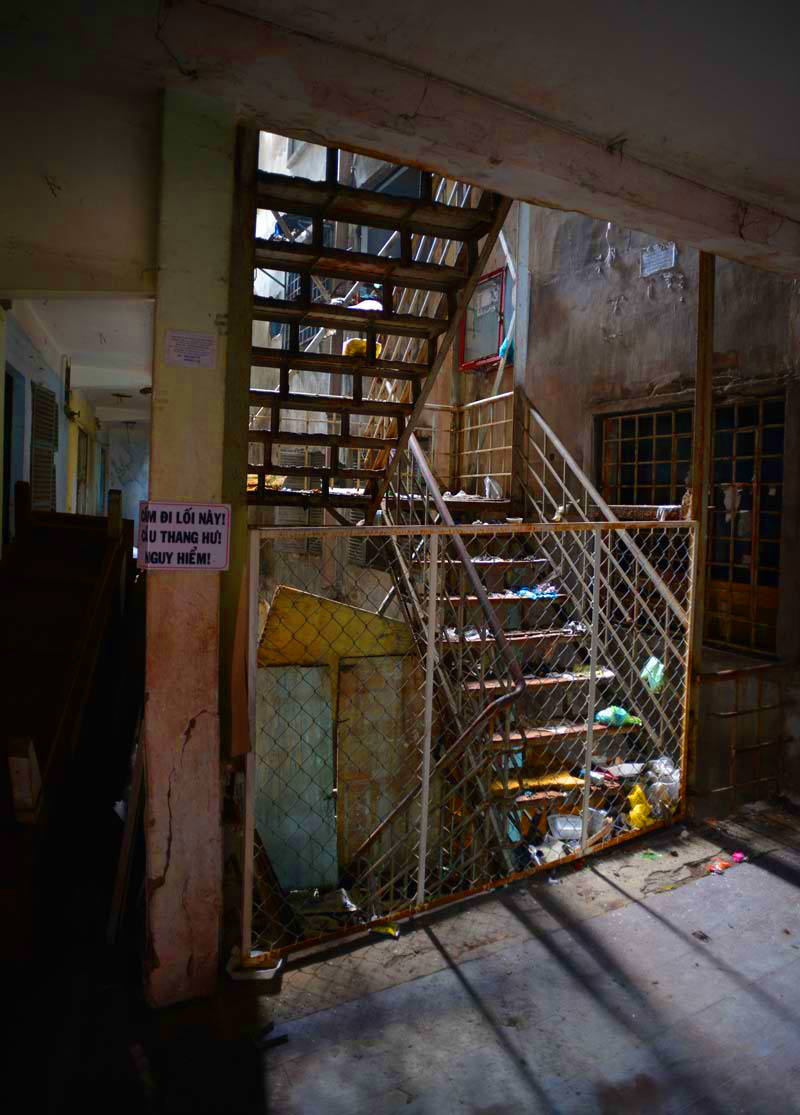 The mystery surrounding the 13th floor might have made its owner falter, but it was what the ghostbuster did that shocked everyone.

Legend has it that the ghostbuster obtained the dead bodies of 4 virgins, which were purchased in local morgues, and had them buried beneath the four corners of the building. This was a type of voodoo that the ghostbuster practiced to counter the curse of the 13th floor and save it from the unsavory presence of unseen forces.

Even though this hair-raising detail remained unverified, it mysteriously helped to facilitate the pending construction of the final floor. Against all odds, President Hotel was finally completed on schedule. 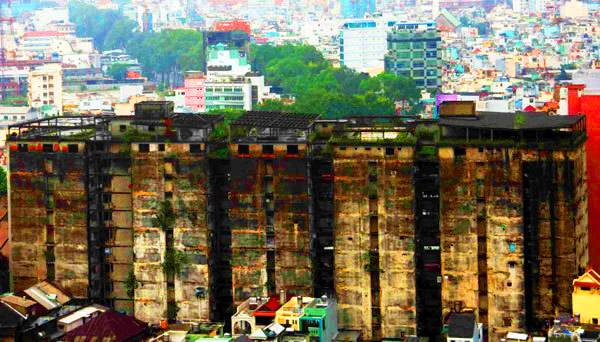 Mr Nguyen immediately earned big returns on his lavish estate as the US military rented the whole building to accommodate its soldiers.

Most of the floors were used as dorm rooms, while the 12th floor was converted into a bar and a restaurant.

The 13th floor, surprisingly, was never put into operation.

After the Vietnam War had ended, the hotel was turned into an apartment building for local government workers and simply called Building 727 Tran Hung Dao. The 12th floor was locked, while the 13th floor remained unvisited. 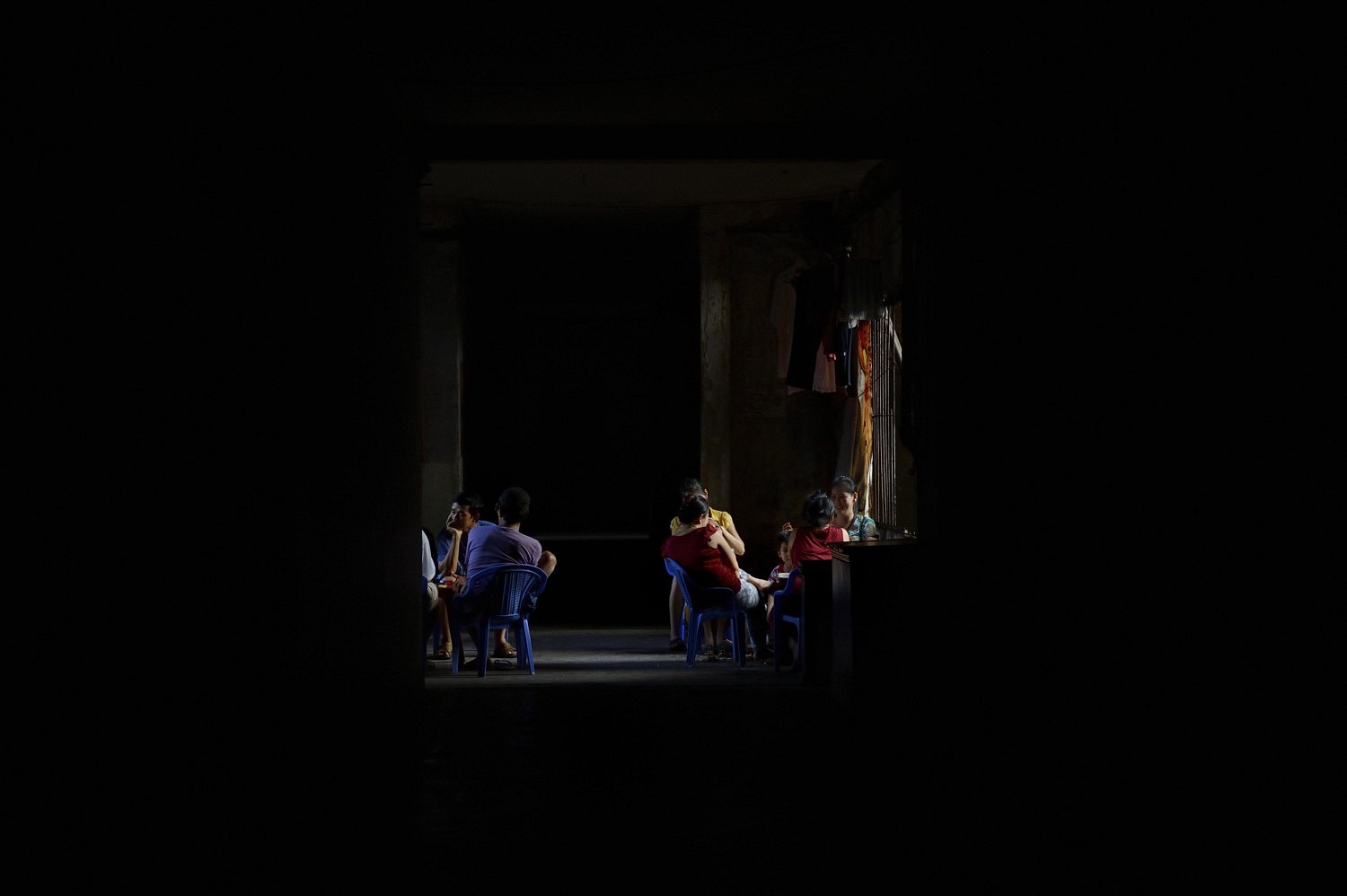 In 2016, Building 727 Tran Hung Dao was torn down to the soil after many years of existing in the stages of decay and all residents had left. Besides, it needed to be uprooted to make room for a new and modern building.

Rumor has it that the builders and developer in charge had to put up an altar and worship there for at least half a month before they could begin their work.

Even though Building 727 Tran Hung Dao had become a thing of the past, some former residents and neighbors were still not able to obliterate this place from their memories. 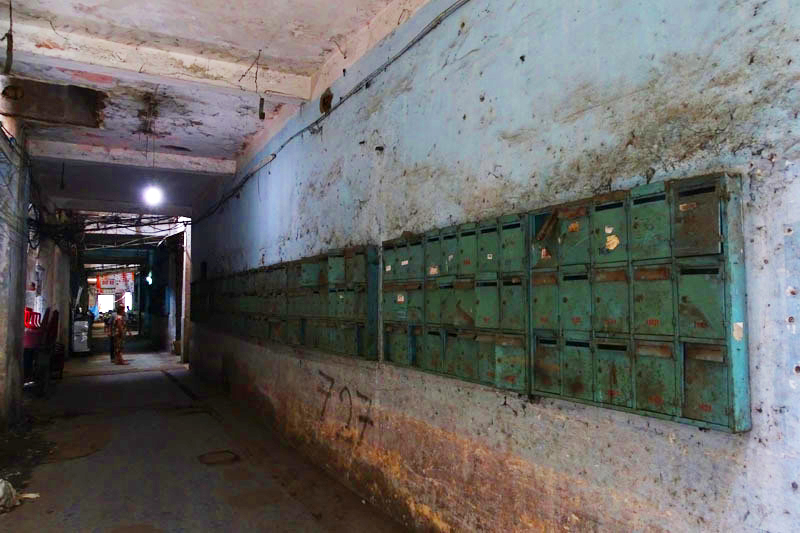 Mdme Trieu Thi M., a former resident of over 20 years, shared, “There were many ghosts there. They filled the staircases and the corners. Every time I climbed the stairs, I felt chills down my spine as a gust of wind blew at my face. I knew that they were messing with me.

“Once, my son was studying as he heard someone knock on the door. He opened the door, looked around, and saw nobody. I was not the only one sensing their presence, but many other people had seen them too. From the ground floor to the rooftop, they were everywhere. I guess that the one with a light spirit or a faint heart (nhẹ bóng vía) had more chances of seeing them,” she said.

Some of the builders at the site also had reported seeing a lady jumping from the building repeatedly.

If someone could jump from a building repeatedly, they are certainly not a living soul. 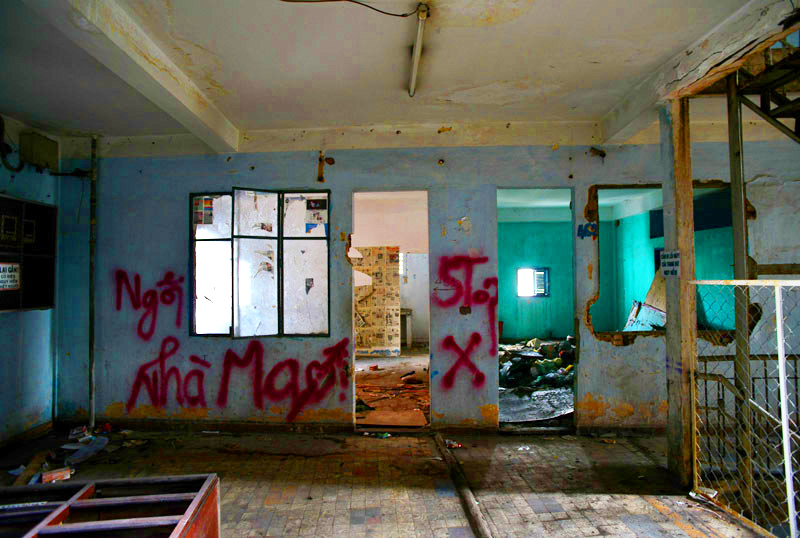 This ghostly lady was said to be Mdm L., a former resident there. According to the neighbors, she had moved out of the building but suddenly returned and jumped to her death.

Mdm L.’s suicide was confirmed by the people who used to live and work here, according to Tuổi Trẻ Đời Sống.

“If I lie, I will die. Once, I saw Mdm L. come back here to drink coffee with us. I asked her why she looked so sad. She said that everything was fine. A while later, she jumped from level 10 to the ground and died. I was at the scene and saw her lying motionless with both eyes open. Nobody could close her eyes,” Mdm Trieu added. 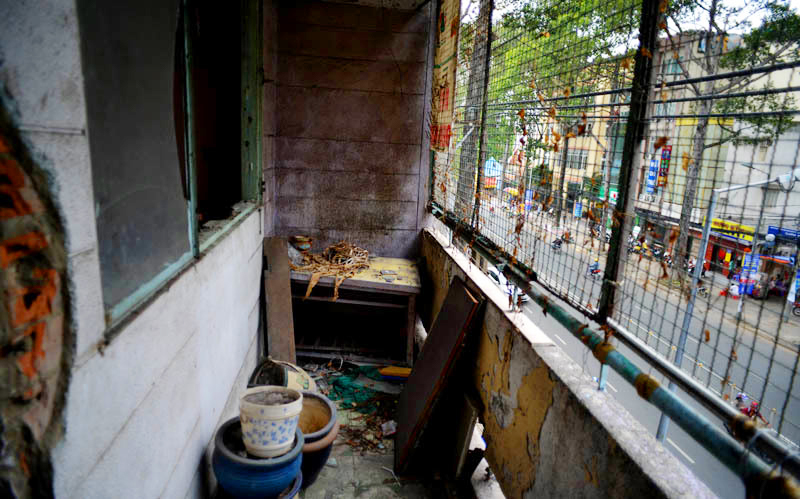 However, that was not the last time Mdm Trieu saw her neighbor.

She said that she saw her deceased neighbor standing at her bed, with a face full of sorrow and bursting into violent tears, while she was taking a nap. Mdm L. even told her that she had been led by one of the dead virgins beneath the building to take her own life.

Other people also reported hearing strange screams inside the building and the sounds of soldiers marching on the rooftop.

Just like many other historic buildings, Building 727 Tran Hung Dao was wiped out by waves of gentrification after half a century lying at the mercy of time and elements. There was no better alternative, because the city can’t be developed and modern buildings built up unless the old, abandoned ones are torn down.

After reading this article, you might wonder to yourself which exactly the root of all the mysteries inside this building was – the curse of the 13 floor or the dead bodies beneath it. You might even question Mr Nguyen’s persistence with keeping the 13th floor, even though it was never put to use after completion.

Unfortunately, there is nothing left from this iconic structure that could offer adventurous residents a taste of paranormal pleasure or tangible hints to resolve the age-old puzzles here.

Hopefully, this summary of the Building 727 Tran Hung Dao’s fascinating history and unresolvable mysteries can take the place of a gloomy walking tour. 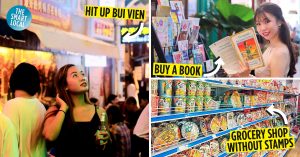 11 Things That I'll Do When Saigon Reopens, From Visiting The Book Street To Seeing A Play
Man Breaks Social Distancing Order, Torches Own Bike When Questioned By Police 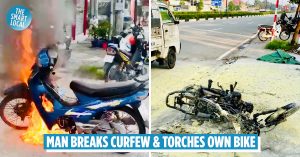