Oh, Singapore… Why do you always want to be the best at everything? Why are we so obsessed with having the largest and longest everything? And before you raise an eyebrow, get your mind out of the gutter – I’m talking about our obsession with breaking records.

The Singapore Book of Records was established in 2005 to compile and adjudicate all national records. They were formed to promote Singapore’s own world records due to the nation’s demand for an organisation to administer and make local records possible. Strange, considering I had never heard of them. Then, it shouldn’t be a surprise that I was scoffing at the sheer number of silly records that exist.

We do have some cool records – the Fountain of Wealth at Suntec City was the Largest Fountain in the World in 1998, holding the title for 11 years. Then, there are those that are too funny to take seriously. I mean, Singapore should probably have a WORLD record for having the most number of ridiculous records – it’s a “record-ception”.

Here are some of the weirdest and occasionally, dumbest records for your reading pleasure.

You may be shocked to know that Singapore is the 8th most fashionable city in the world. This should be a record in itself because our go-to pieces include flip-flops, ill-fitting tops and FBT shorts. And don’t even get me started on Crocs. Now, even clothes have gotten in on all the record-setting action but between you and me, they’re not exactly the most fashion-forward records we have.

1. Largest Gathering of People Wearing Socks in a Similar Pattern 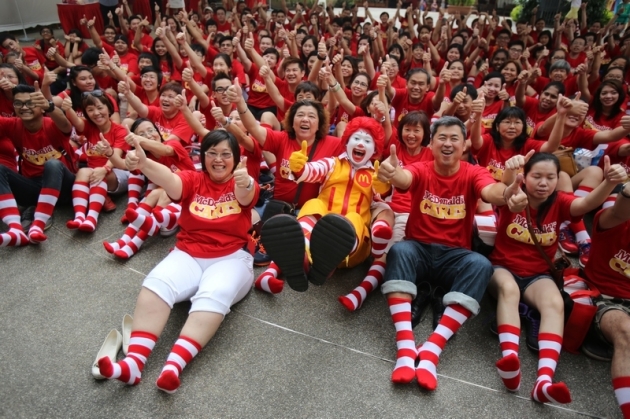 To raise awareness and funds for the Ronald McDonald’s House Charities, 164 McDonald’s staff and volunteers wore red and white striped socks à la Ronald McDonald himself. Held last month on the 16th of November at Tampines Mall, everyone gamely posed for pictures wearing their bright socks. I don’t mean to be rude but I tried to look for Wally in those pictures.

But it is for charity and I cannot judge it without seeming like a major douchebag, so I’ll just say that horizontal red and white stripes do not look good on everyone. Apart from on National Day. Then again, maybe not. 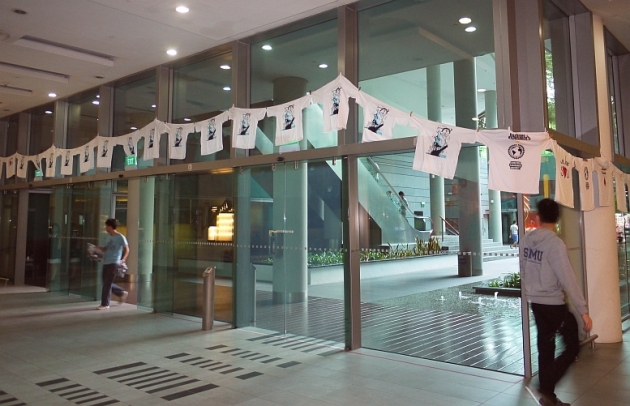 I’m an advocate for sun-drying your newly-washed clothes because dryers just don’t cut it – there’s a freshness and crispness you can only get from drying your clothes in the sun. But SMU took it a little too far by collecting enough clothes to set up a clothes line that was 513m long on 6 September 2013.

Well, these clothes weren’t wet but could you imagine going to school and realising that there were clothes hanging around everywhere? Well at least they weren’t… wet blankets.

3. Largest Amount of Clothes Collected and Washed at One Location 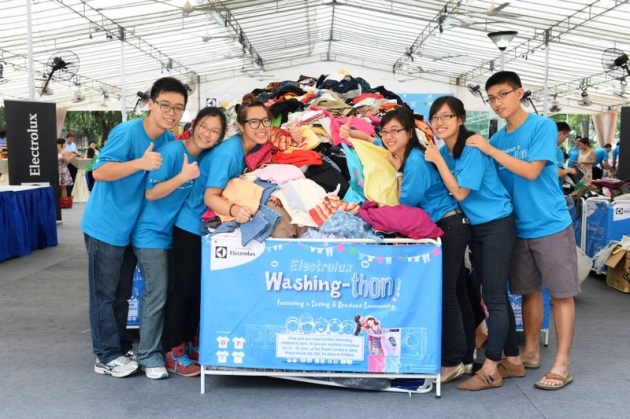 Speaking of drying your clothes, Electrolux held a “Washing-thon” from 13 to 15 June 2013, where a total of 3,889 kg of clothes were collected and then, laundered. Well, I guess doing your laundry can be part of a record now.

“Nom, nom, nom” – Singaporeans just love their food. But I would never have imagined that we would take our love for food to the next level by making up records of well, eating. I found out that we have set records for the most number of people eating pears, bananas, sandwiches, lollipops and kacang putih together. However, the following two definitely take the cake.

4. Most Number of People Eating Chilli Together 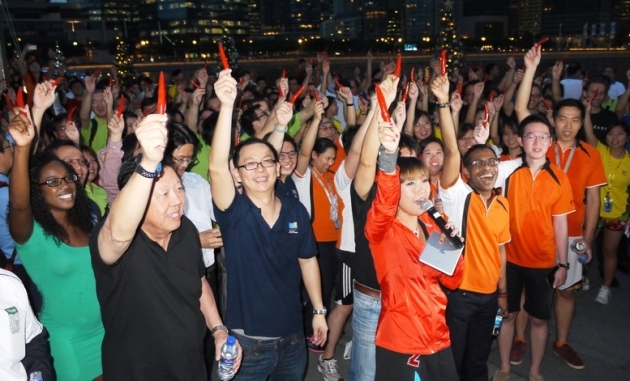 This record was set on this year on the 6th November as part of celebrations for International Accountants Day held at Marina Bay. The theme for the event was “Accountants Are Hot” and 310 participants ate long red chillies to set this record.

Here’s my problem: I don’t know which the bigger crime is: the theme or the fact that the organizer might be secretly planning to set another record for the most people visiting the restroom at the same time.

5. Most Number of People Sucking Multi Vitamins Together 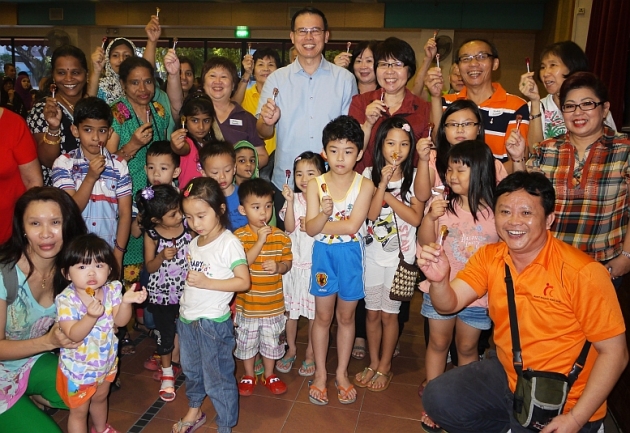 The residents of Bukit Panjang celebrated Children’s Day at their Community Club on 22 September 2013. They had food and games and apparently, this record-setting activity. 538 people comprising of parents and children sucked on lollipops containing vitamins A, C and E. As amusing as this is, I feel sorry for the children who got conned into eating those multi-vitamins.

Every time I have friends from abroad visiting Singapore, the first thing they talk about is how clean the country is. It has become a badge of honour for us Singaporeans to be known for our country’s cleanliness.

After all, the founder of the World Toilet Organization is Singaporean. Along with sanitary toilets, perhaps our hygiene-related records will further sanitise our already clean image.

6. Most Number of People Doing Handrubs with Sanitisers 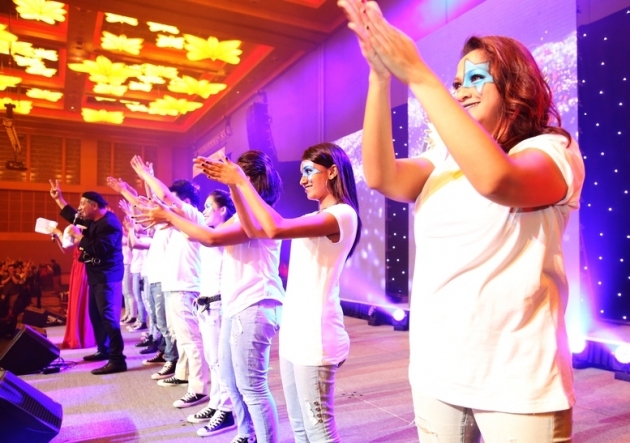 This record was set by a whopping 1,871 people at Singapore General Hospital’s Dinner and Dance on 25 October 2014. Not only did they demonstrate the hospital’s procedure for cleaning their hands with sanitisers, they they did so in sync with music and choreography.

As someone who cannot live without a bottle of hand sanitiser nearby, I approve of this record. That said, I’m still not sure how I feel about dancing doctors and nurses.

7. Most Number of People Showering Together 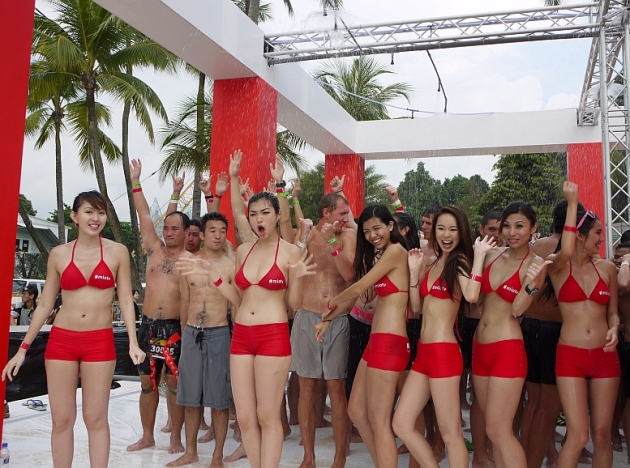 As ironic as it is, this record is a little dirty considering it involves people taking showers together. Organised by SingTel mio TV, it was held at Siloso Beach on 26 October 2013. This Guinness World Record was set after 263 people showered simultaneously at the beach.

Here’s the dubious part – the main draw was that the bikini-clad SingTel Grid Girls were going to be under the showers as well. Now, you just know that men wouldn’t have been just as excited about this silly record if there wasn’t the prospect of seeing girls being doused with water.

Keep Calm and Dance On

Singapore has had a long history of dance. With our multi-cultural heritage, we have traditional dances from each of our major ethnic groups. And yet, the dance-related records have absolutely nothing to do with our culture. Do you remember The Ketchup Song? We have a record for the Largest Ketchup Dance. How about Gwiyomi? Yes, we have a record for the Largest Gwiyomi Dance too. But the next one, I just can’t deal with.

1,400 children were led by a rooster mascot in a five-minute chicken dance on 17 March 2012, as part of an annual Easter Egg Hunt organised by Kids In Total Embrace. I don’t know what chickens have to do with Easter other than the fact that they lay the eggs, but making kids do the Chicken Dance to that awful tune for five straight minutes is torture.

Botak NS boys; Phua Chu Kang’s signature curly locks; the Singapore Girls’ perfectly coiffed hair – our crowning glories have insidiously become part of our collective identity. So, when I read that there were records concerning our hair, I was intrigued. And then, really disappointed to find out that the records were peculiar. 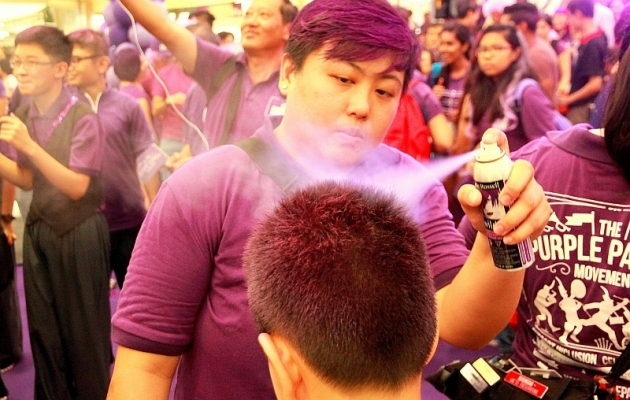 I listed this record for being completely random. It was part of The Purple Parade, a movement that supports the inclusion and celebrates the abilities of people with special needs. They had a carnival on 15 November 2014 where 280 people had at least one-third of their hair sprayed purple to support the cause.

I can’t criticise this one because it’s for a good cause. And really, I have to applaud their bravery because purple hair is a hard look to work.

10. Most Number of Scalp Treatments at One Location 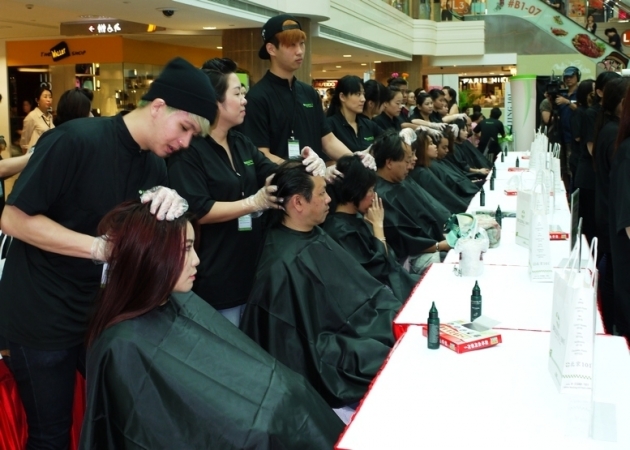 Why in the world would you want to have your scalp checked in public? 254 people didn’t have any qualms with that – Beijing 101 Hair Consultants gave them all free scalp treatments where hair tonic was massaged into their scalps at a roadshow in Junction 8 on 4 October 2014.

Perhaps getting dandruff-free hair is worth the public humiliation. 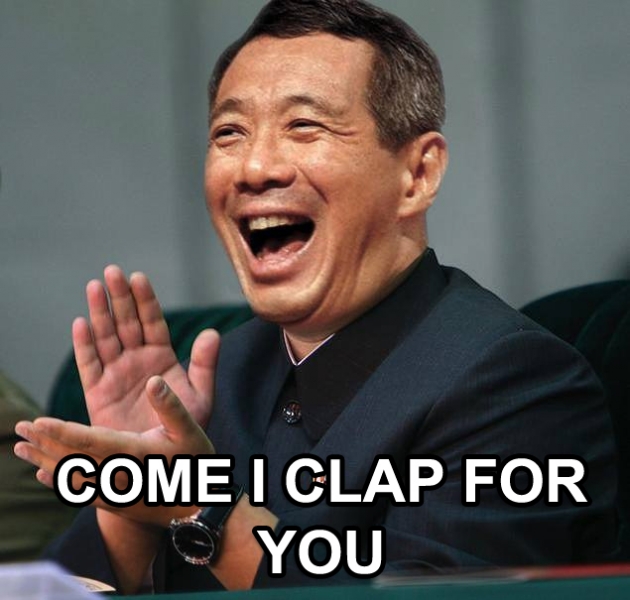 With a variety of records under Singapore’s belt like the Most Number of People Knitting Simultaneously and the Largest Game of Scissors-Paper-Stone, chances are high that anything you do could potentially be a record.

Just try to do something that you can be proud of – I would never want to tell my future children that I was taking a shower with 262 people. Also, a lot of these records appear to be carried out by companies as marketing gimmicks, used for promotional purposes.

Have any suggestions to make? Let us know in the comments below. We’ll probably adopt a charity while we’re at it and channel all proceeds to it. The TSL team is game for any challenge and you might just see us listing ourselves in this article next year!