One might wonder what’s the subject of water monitor lizards doing in one of Singapore’s foremost lifestyle and travel oriented reviews websites. Well, being an avid nature photographer and repeatedly coming up close and personal with these “gentle” lizards  during my park visits and the fact that I overheard many park visitors frequently describing them as “Komodo Dragons”.

I thought it might be an opportune time to do a journal on them, so that readers will gain a slightly more in-depth knowledge of them when they spot these water lizards if they do visit the nature parks in the near future.  And the fact that I accumulated a healthy portfolio of these cold-blooded reptiles to facilitates a more interesting write-up with pictures.

For starters, if they’re really Komodo Dragons, rest assured I would be the first to do the century sprint possibly as fast as Usain Bolt! You don’t want to mess with the Komodos… their extremely venomous saliva are certainly not overrated.

Rest assured while Water Monitor Lizards are in the same reptilian family with the Komodo Dragons, they are “tame” in comparison. They are essentially carnivorous in nature and particularly fond of carrion (dead decaying flesh of animals). 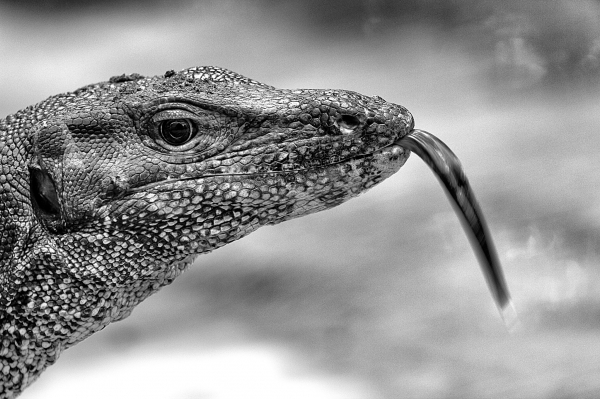 One interesting fact is that water monitor lizards are the world’s second-heaviest lizards, after their close cousins, the Komodo Dragons. In the picture above, you can see the lizard, similar to snakes, have a forked tongue that they stick in and out regularly to “smell” their prey and tasty titbits.

As I am rather in close proximity when shooting this lizard, it’s probably checking me out if I qualify to to be a snack. Great I failed the “tasting session”. (^O^)”” A juvenile lizard hiding in the bushes. The “juniors” are more brightly coloured with yellow spots on the body and tail, in contrast with a darker body. You may have a harder time spotting them as they have acute survival instinct and tend to hide among thick foliage.

They are prey to crocodiles and other larger predators. Males grow faster and bigger than females. In ideal condition, they reach maturity in 2 years at 1.13m for males and 0.5-1.2m for females attaining weight of 25kg. Average life-span are about 15 years old. A juvenile among the bushes. Occasionally, if it stays still, you may missed it. I was alerted to this junior by the rustling and crackling of the dried leaves, as it foraged for food. 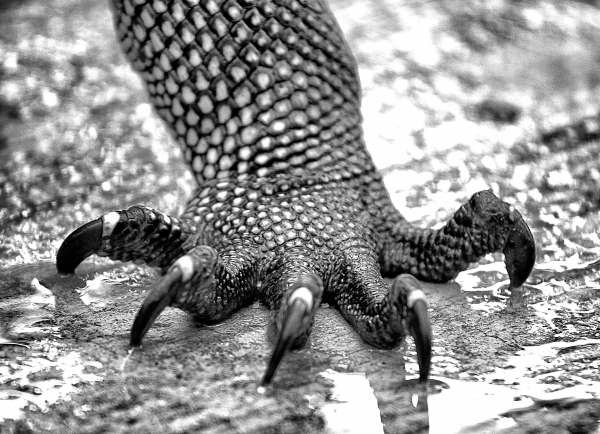 Do you like their claws ? They help the lizards run fast (in fact, they may outrun most of us) as they have powerful leg muscles. It also make the lizards adept at climbing trees, to search for food and escape predators. The young usually stay in the trees for protection.

And of course, the claws come in handy when they are cornered, where they will bite and claw their way through. I have frequently observed the Sungei Buloh “resident” lizards displayed all manner of laceration on their body…food fight, territory marking, mating rites. I think they won’t want pedicures anytime soon. 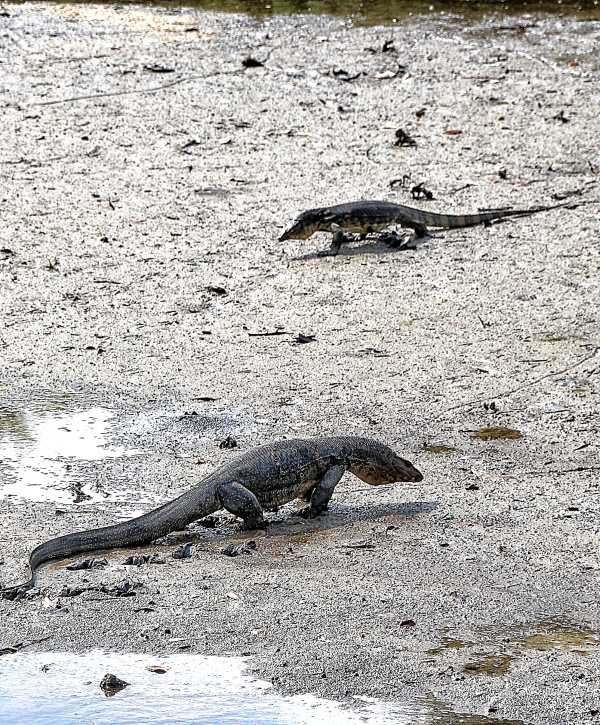 In the picture above, I had the rare chance to observe a couple of intercepting adults at the Sungei Buloh mudflats. Notice how they inflated their throat to look intimidating? A battle followed as I clicked the shuttle. The lizard in the foreground won. 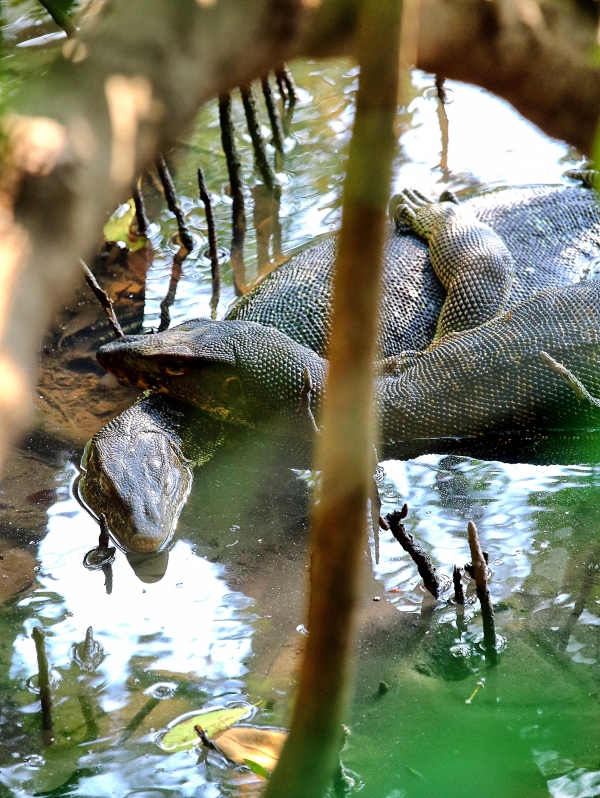 Water Monitor Lizards are certainly productive, reproductively speaking. Up to 40 eggs (4-6 weeks after breeding) in one to two clutches are laid annually, with incubation lasting 2.5-10 months. Lots of biting and scratching are part of the mating rituals. So should you spot a pair behaving as such, please spare them the privacy …. Shhhhhh. 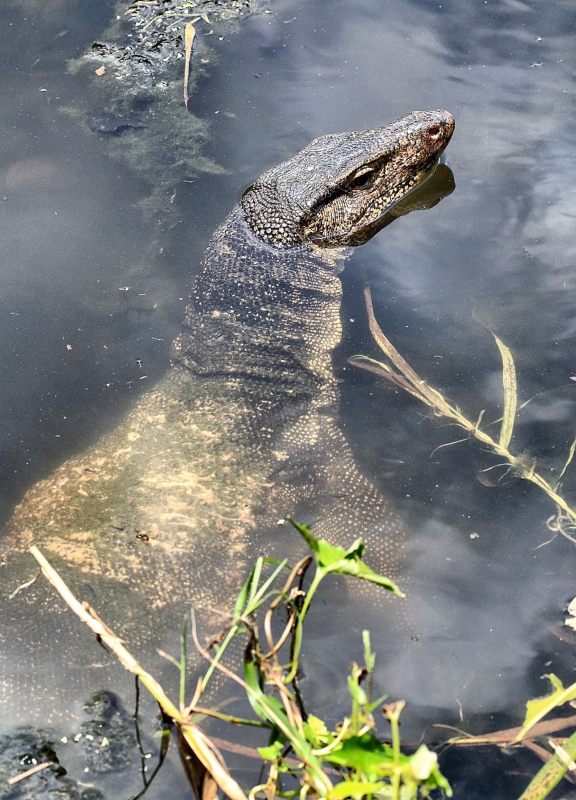 Water Monitor Lizards are highly mobile and great swimmer. They have been seen swimming far out in the open sea. In fact, during one of my ferry ride from Mersing to Pulau Tioman on dive trips, I actually spotted one cruising the waves about an hour from shore!

During swimming, their keep their limbs to the side of their body and can remain underwater for up to half an hour. I can safely assume many of the Sungei Buloh lizards swam over from across the Straits of Johor. Fresh rain water are Water Monitor Lizards favourite water source. Sort of  like “Avian” mineral water for them. In the picture, you can see one gulping loads of water. Oblivious to me clicking away. The water mointors fulfills an important role in the natural habitat. Being scavengers, they keep the surrounding neat and tidy. In the food chain, they are food source for bigger predators like crocodiles and big birds of prey. Their juveniles are especially vulnerable to herons. But with fierce looks like the matured male above, he should be very safe, secure and live to a ripe old age. Water monitor Lizards are considered endangered in some parts of the world, like mainland India, where they are hunted for their meat and skin. One reason the larger lizards are still plentiful as their skin are too thick and tough. Their meat are considered delicacy and wide of range of potions are made from various body parts as cure for diabetes to aphrodisiacs!

Good thing at Sungei Buloh Wetlands Reserve, they are left largely alone except by photographers like me…LOL 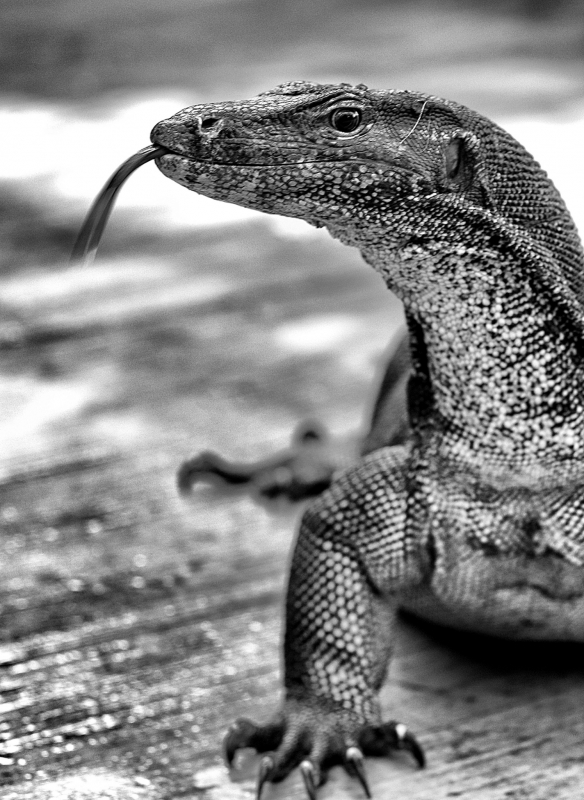 So remember, I am a Water Monitor Lizard, not a Komodo Dragon. Do visit me when you drop by Sungei Buloh Wetlands Reserve sometime soon. Thank you for getting to know me better.

N.B – All pictures are copyrighted to Jensen Chua and all rights reserved.