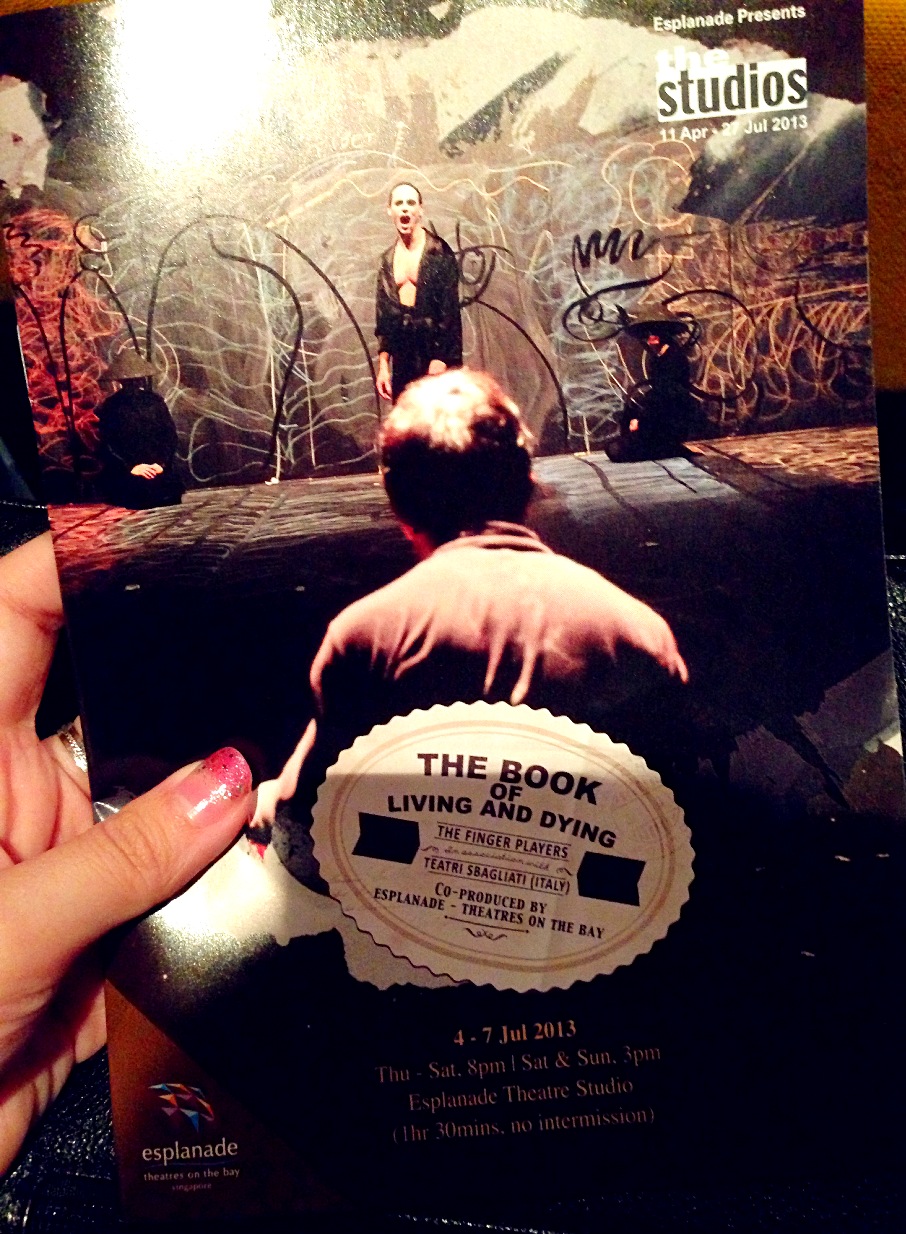 There is a new play in town.

It has been selling tickets as early as February and it’s really not hard to see why. I was lured into the promise of an excellent play despite having never heard of them (my friends are not artsy SIGH) and I will hence lure you in with the same synopsis they offered me:

“Immortality is the wish of procrastinators who can’t get their act together in this life.”Diagnosed with a terminal cancer, a transvestite in New York tries to discover the meaning of his life, and to rebuild a relationship with the only family he has left — his adopted daughter. As the daughter prepares her father for death, cleaning and clearing out his apartment, she uncovers a secret which has been long buried and suppressed, the revelation of which drives a wedge between them. The two personal histories collide as the seed of their relationship is cast back to the origins of the universe, the numerous reincarnations they had spent their lives together before finally settling on the tumultuous one that they have today. In the meantime, the transvestite is greeted by divine visions, beckoning him to save the world from destruction, and from his past follies.

(read the rest at http://www.sistic.com.sg/portal/dt?retry=1&dt.windowProvider.targetPortletChannel=JSPTabContainer/sEventsCalendar/Event&dt.provider=PortletWindowProcessChannel&contentCode=book0713&dt.windowProvider.currentChannelMode=VIEW&dt.isPortletRequest=true&dt.containerName=JSPTabContainer/sEventsCalendar&dt.action=process&dt.window.portletAction=RENDER)

I went to catch the 2nd day of it alone and it was a very, very visually explosive experience.

It basically chronicles the insanity of the said transvestite (who is really much prettier than me) (I’m quite ashamed) (sigh) and the 9 previous lives of their family cat (who is an impressive actor).

But to sum it up in a less flowery way because I had a hard time reading the description, (I absolutely abhor naggy texts) (and they say you hate what you are so) here’s my take on the naggy text:

This play is about a white transvestite who was put into a circumstance where he finds himself powerfully bonded to a black lady, so much so that he committed sin upon his first sight of her. But we will learn that he cannot help it, because of how intermittently him and the lady have been connected since their previous lives.

This play is also about the family cat and his visions and reincarnations. It has lived a long time under the same position because it is unable to repent for his actions in its very first lifetime. While the cat recollects, we will meet ghosts of the past and revisit their sins (the white slavery monarchs, the German rulers, names you’ll recognize) and we’ll come to learn why the fore-mentioned couple has to suffer the way they did.

This play is finally about the black adopted girl (who in my personal opinion is an indecisive ingrate) and how her knowing the truth will change the destiny of everyone involved.

I never thought I’d enjoy plays because I thought they were all as silly as interpretive dance (I’m sorry man if I can do those dance moves in 15 minutes, then you definitely cannot impress me in 15 minutes of your nonsense either) but this one literally had me at the edge of my seat.

I kept leaning forward at the vital points and because they kept drawing and re-drawing on the stage and its walls. And also partially because my contacts are the wrong degree and I can’t see. I also heard the people behind me tsk at me blocking them unintentionally with my excitement but do I care nope nope nope.

It’s a good play but like most movies, the ending is a great disappointment. But at least you can be prepared for a visually intensive ride (it’s also a little deafening) and you’ll come out of it feeling strangely changed by what you know now.

But don’t take my word for it – go watch it yourself!

(the play only runs through today to tomorrow so BE FAST!)