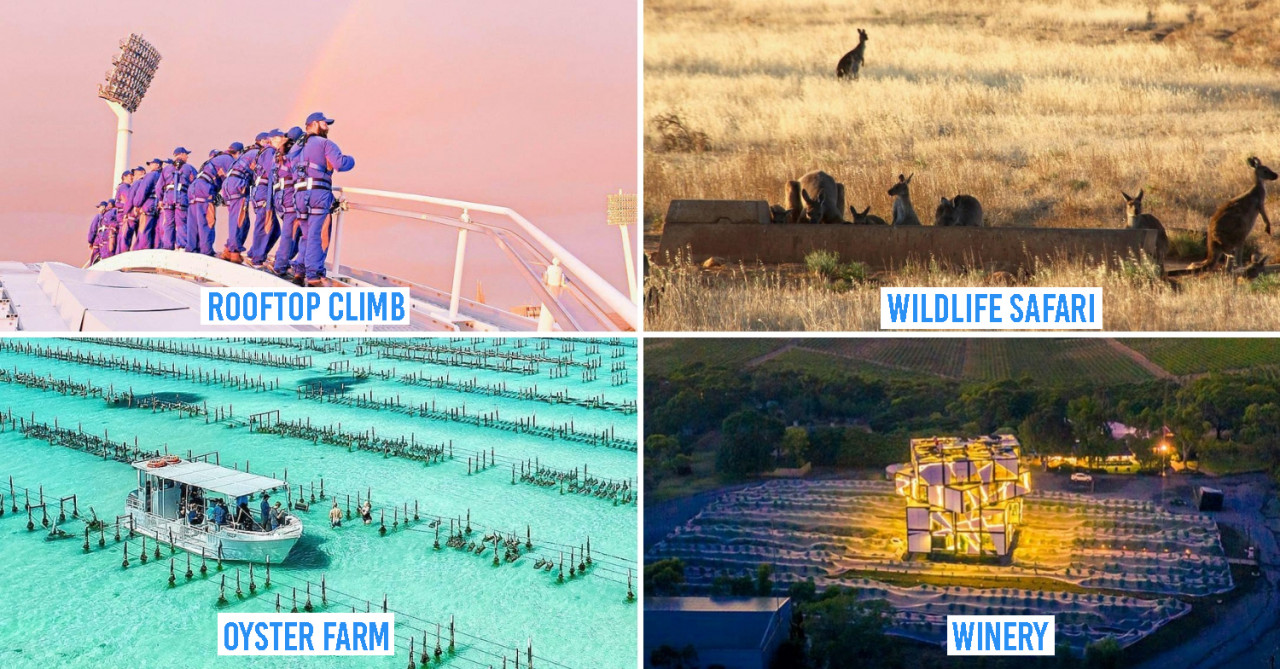 You’re in dire need of a break but have no idea how to go about planning a holiday in South Australia – you’ve never been there or you just don’t know where to start. But don’t let that stop you from enjoying yourself, since Jetabout Holidays has got several tour packages so you don’t need to delve into the nitty-gritty details. 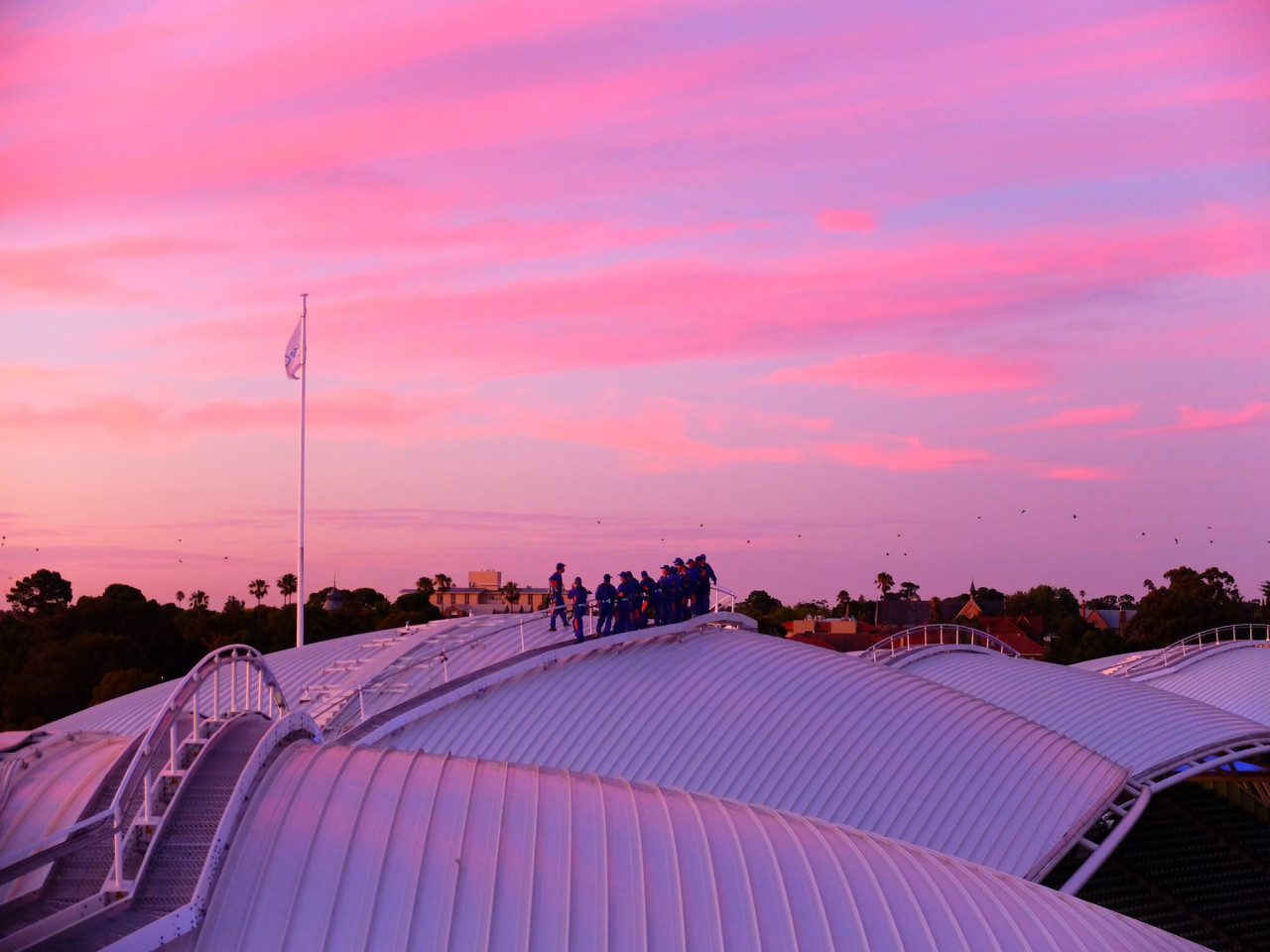 Those who love living life on the edge will enjoy the adventures offered by Adelaide Roofclimb Oval. After climbing up a height of 50 metres, you’ll get to walk across 6 giant oval-shaped roofs to enjoy panoramic views of the stadium’s football field, the tranquil riverbank, and the lush greenery of Adelaide Hills.

Visitors have the option of climbing up the roof during sunrise, twilight or sunset but the views are gorgeous, no matter the time of day.

The hike up is a gradual one though, as visitors will have to trek a total of 12KM through several flights of stairs, outdoor walkways, and a bridge. Get ready for a good workout!

Those who have height-anxieties, fret not ‘cause there aren’t any sudden drops or elevations. You’ll also be given a safety briefing prior to the climb and a customised RoofClimb suit that can complete with a safety harness and anti-skid shoes. At the end of the climb, you’ll also be awarded with a certificate of achievement for braving these heights. 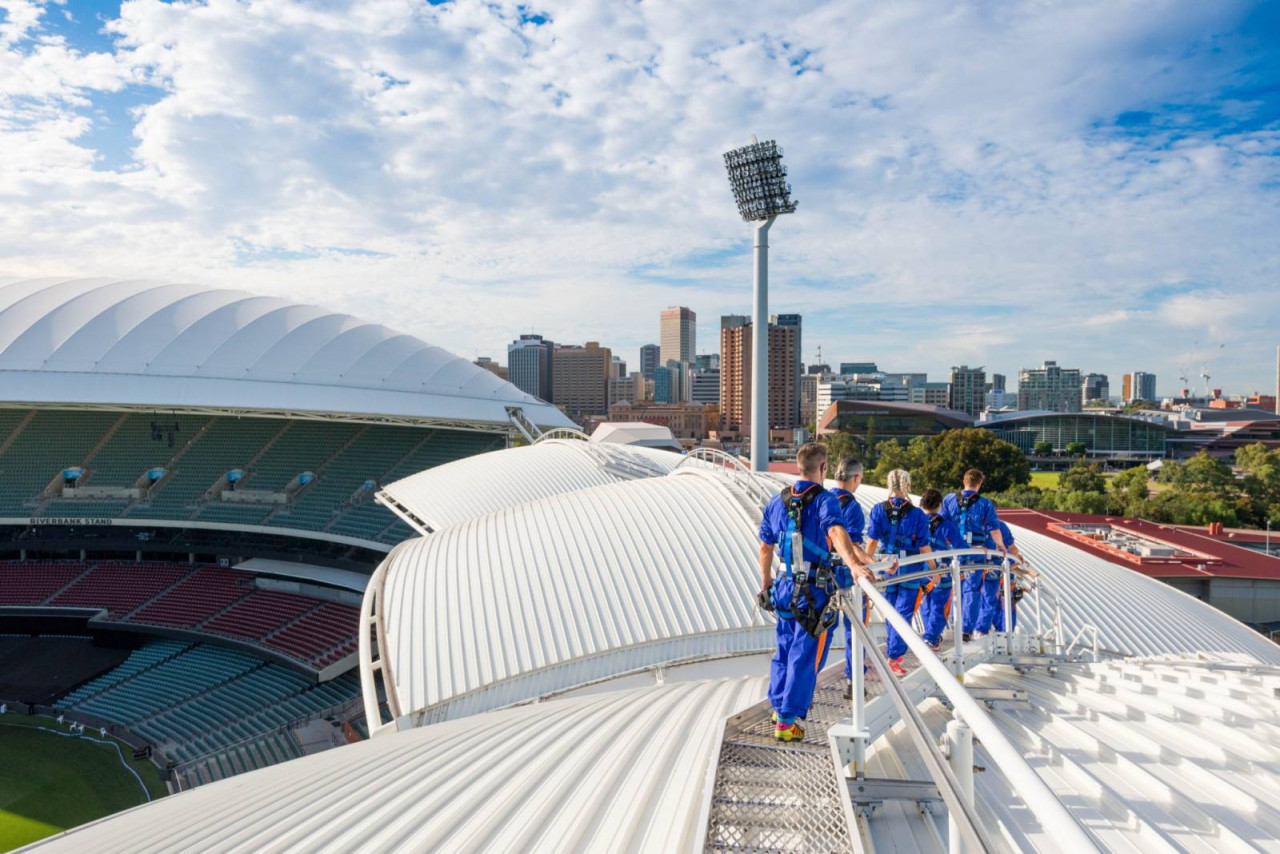 Climbing may be exhausting but it’s worth it for the breathtaking views
Image credit: South Australian Tourism Commission

The place also offers up photography packages to document your climbing achievements so don’t worry about having to lug a camera along. If you’re feeling hungry after the climb, recharge over a meal at the stadium’s Hill of Grace Restaurant or their Koffee Ink Cafe, which serves up artisanal pastries. 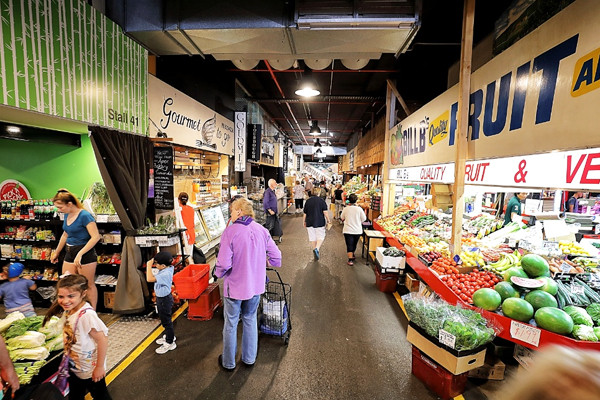 Those who find grocery shopping therapeutic will find much joy strolling through the rows of fresh fruits, poultry and artisanal goods at Adelaide Central Market – one of the oldest and biggest markets in the country.

The market has a long history behind it and has over 100 stores selling fresh seafood like oysters and sea urchins, and tasty bites such as ready-made pancakes and sausages. 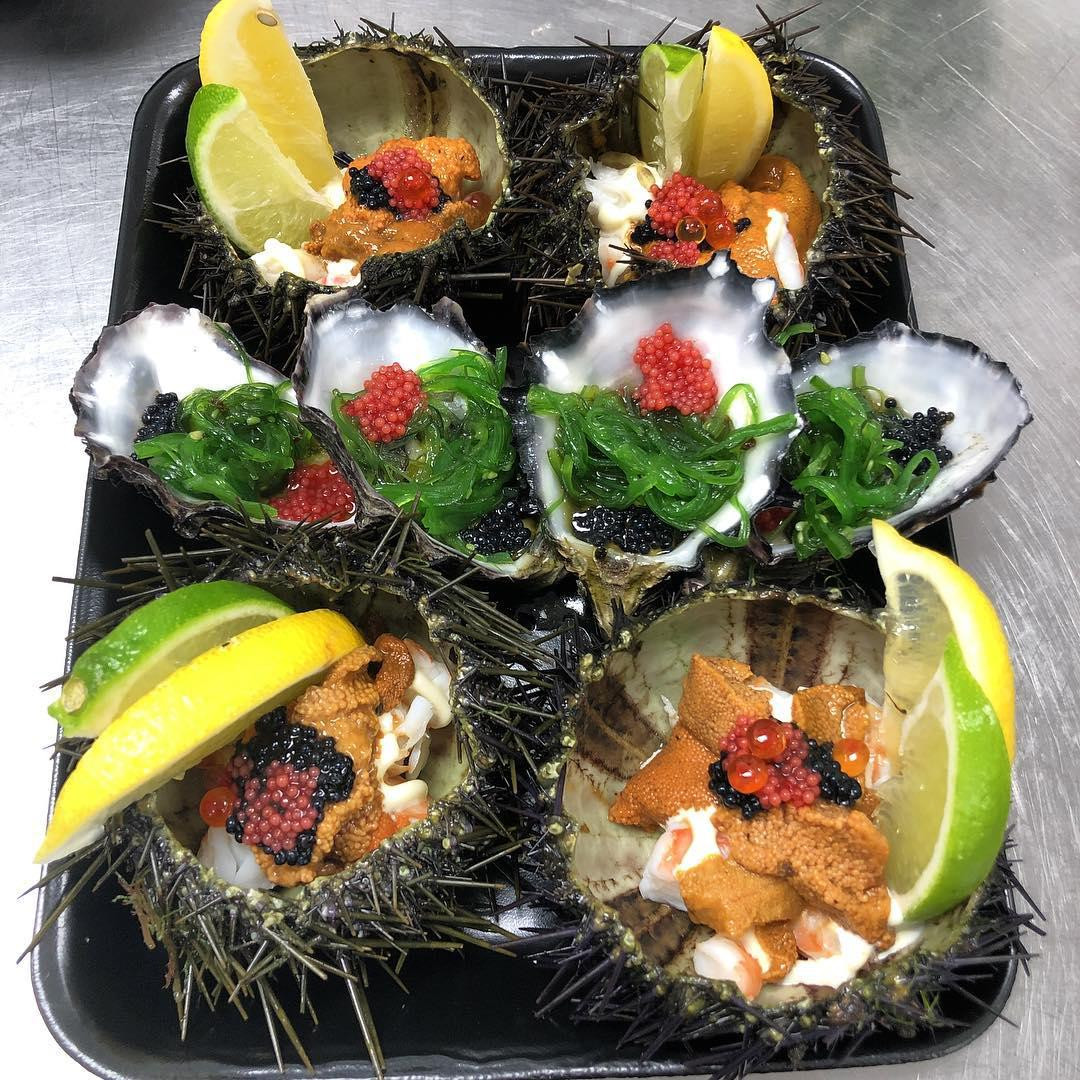 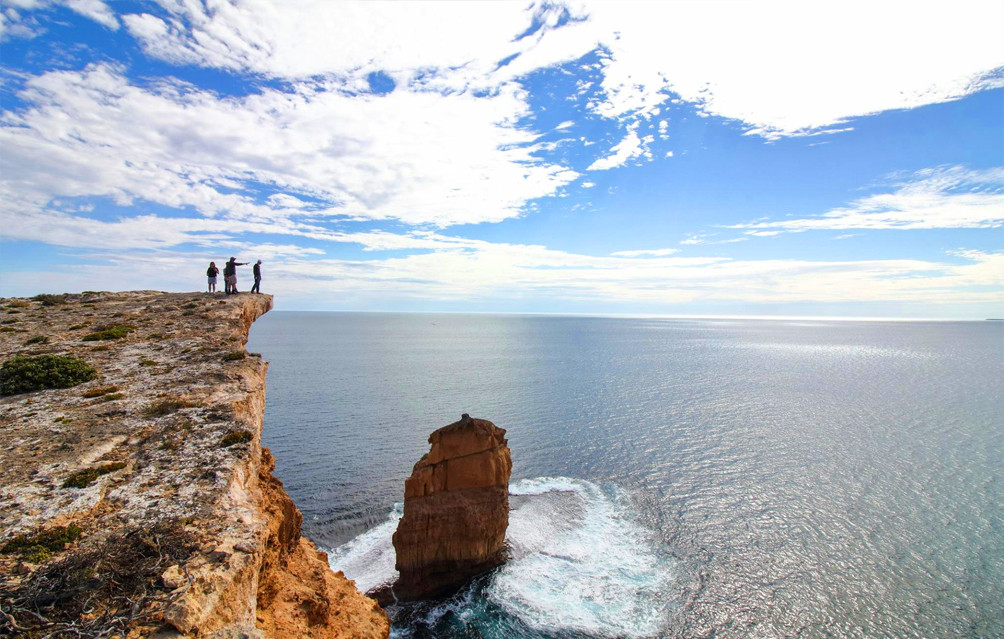 Those who enjoy being where the wild things are should bookmark Goin’ Off Safaris – tours that range from Nature and Wildlife to Seafood and Wine. 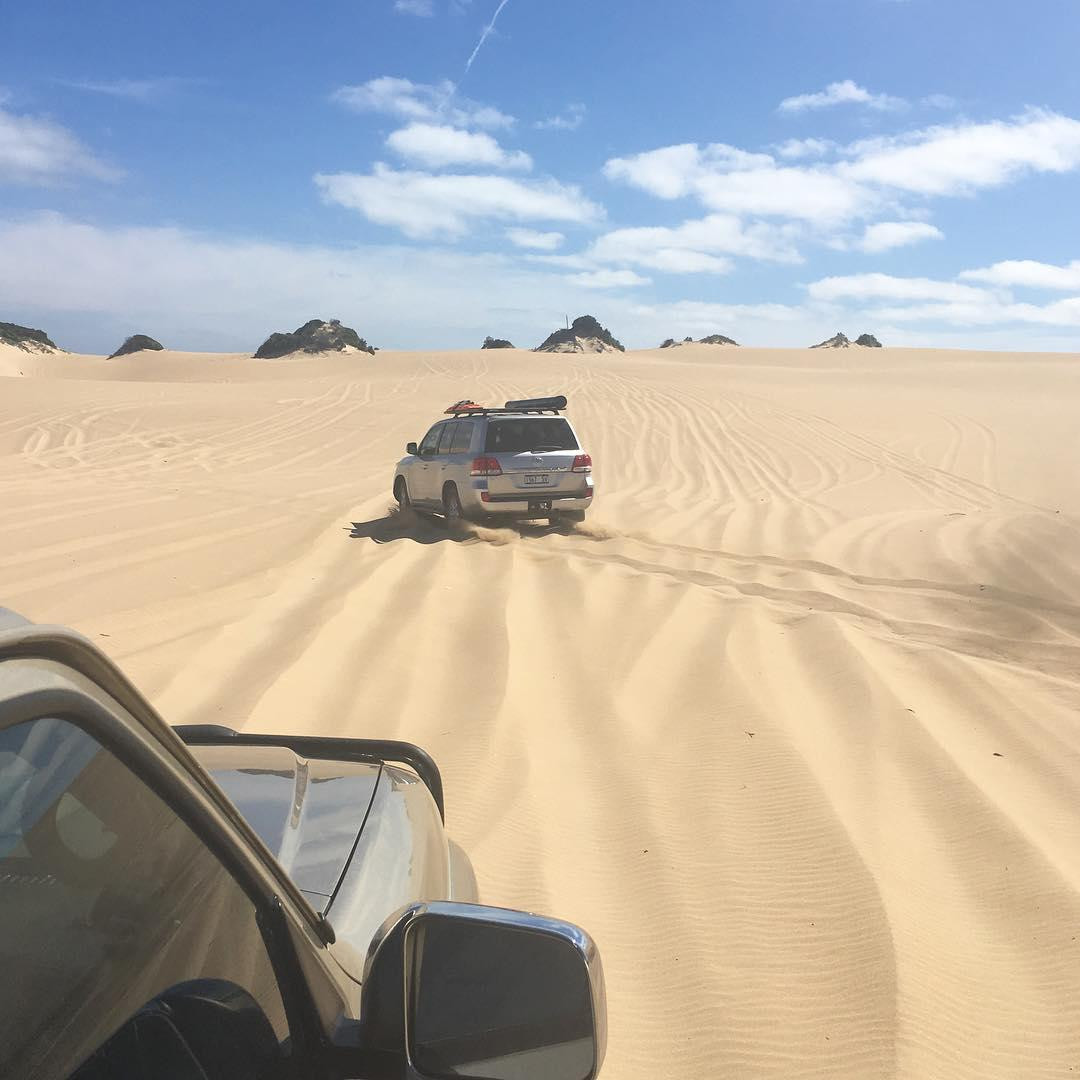 Their Hunt & Gather Seafood Experience has a seafood-centric lineup: snorkelling, hunting for abalone and salmon and even cooking what you caught for lunch. You’ll then be speeding across sand dunes in a 4WD, for a chillout sesh by the beach with a bottle of wine and seafood BBQ.

4. Shuck fresh oysters in the middle of the ocean at Coffin Bay Oyster Farm 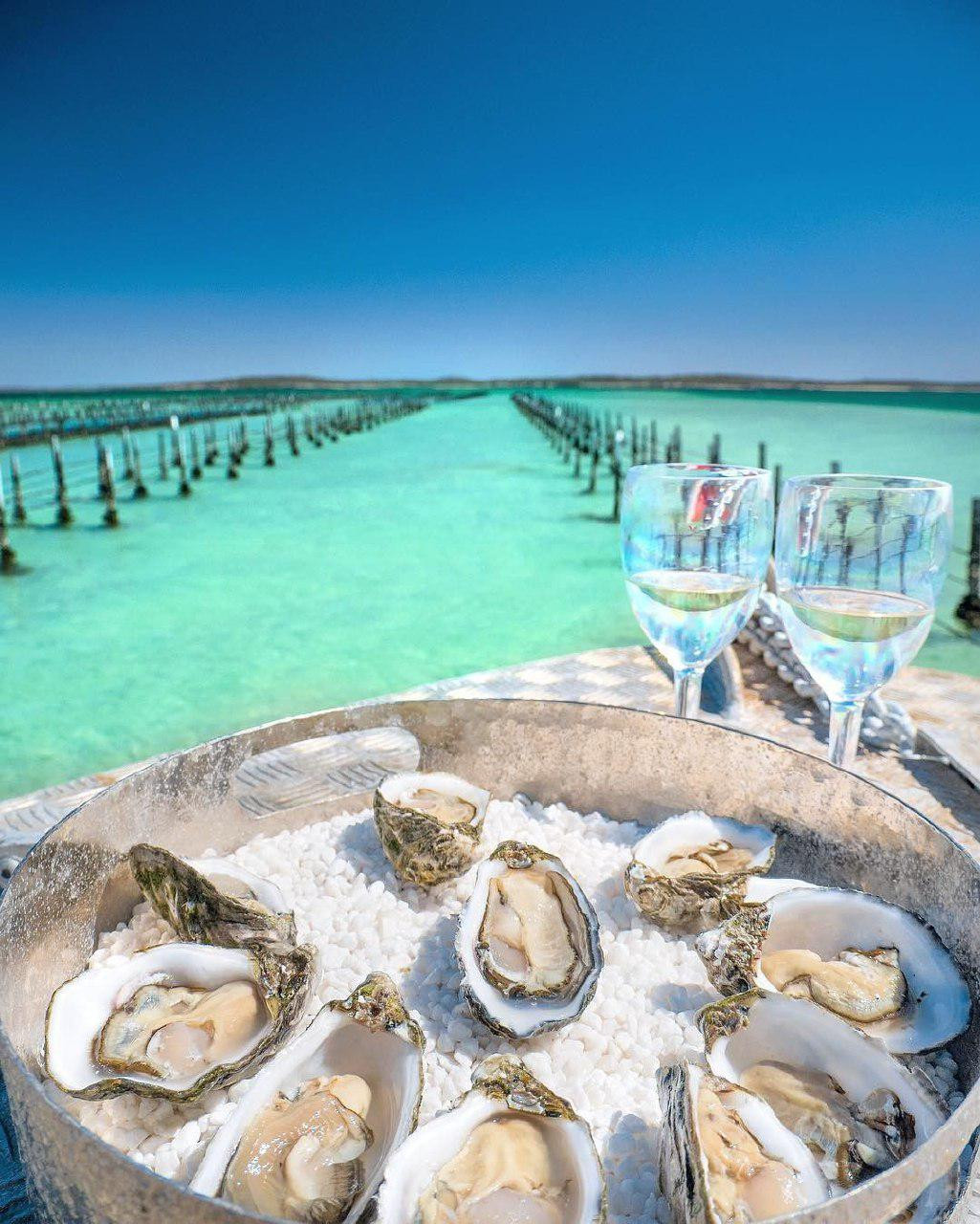 Oysters taste even sweeter when you see how they’re harvested and especially when you get to pick and shuck them yourself. Coffin Bay Oyster Farm is the only place in Australia that offers up behind-the-scenes know-how on how oysters are fed and fattened every day. 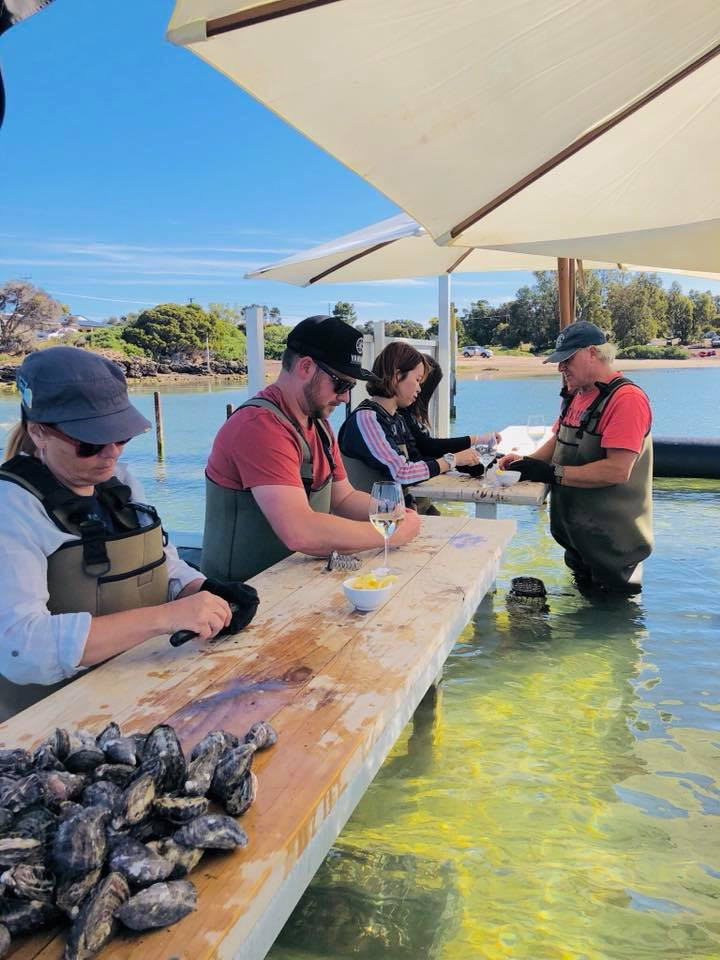 You’ll also be brought to the middle of the ocean where you can pick out oysters fresh from the sea and slurp ‘em straight up. During this hour-long tour, you’ll get to meet the owner of the farm who’ll reveal tricks of the trade – what makes Coffin Bay oysters a standout special. 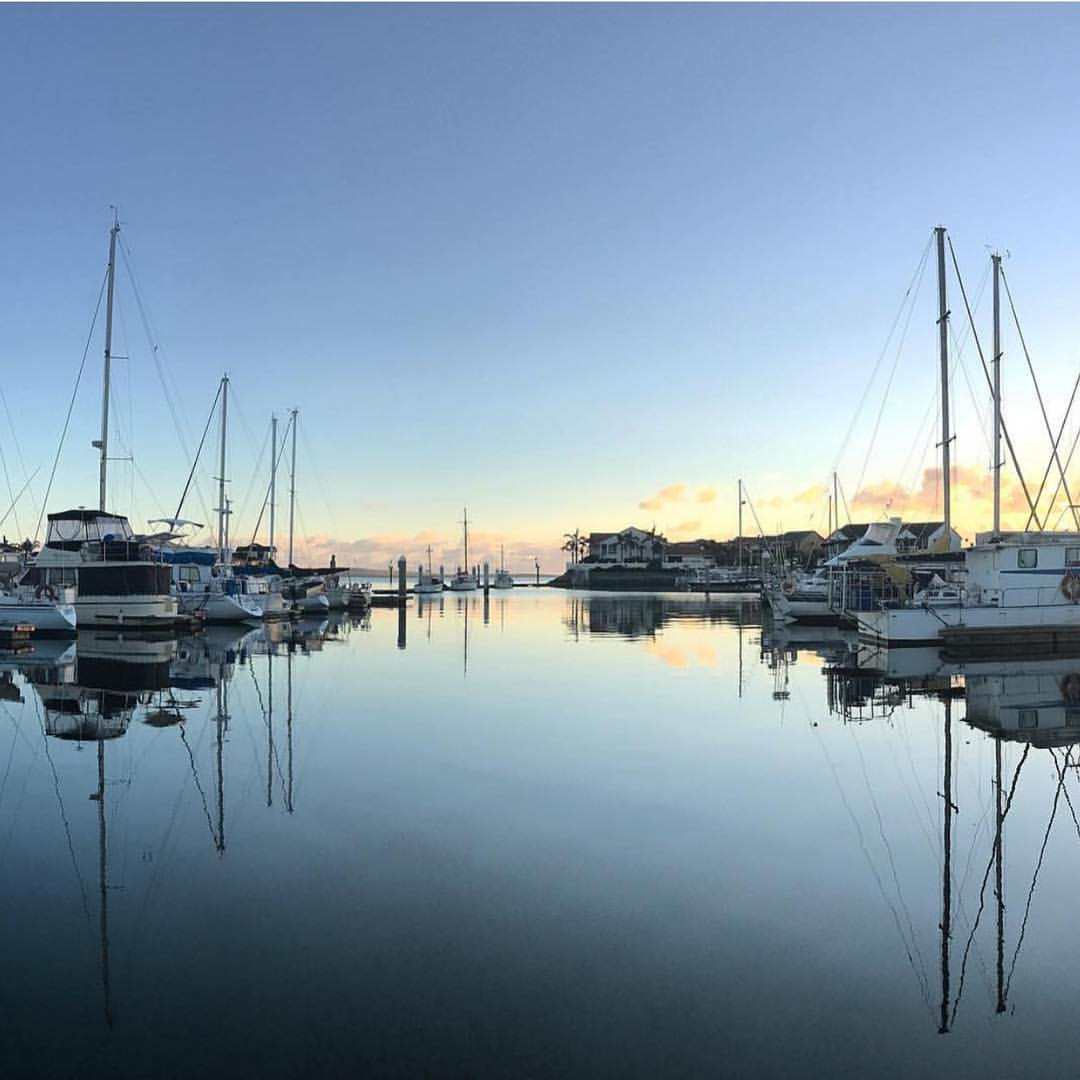 As Australia’s largest fishing fleet, Marina Wharf comes with unparalleled views of ships docking and sailing off into the horizon. Friendly fishermen are often seen offloading their catch of the day – you’ll also get the chance to stop by and enter one of the port’s biggest vessels to see fresh seafood like bluefin tuna and Hiramasa kingfish. 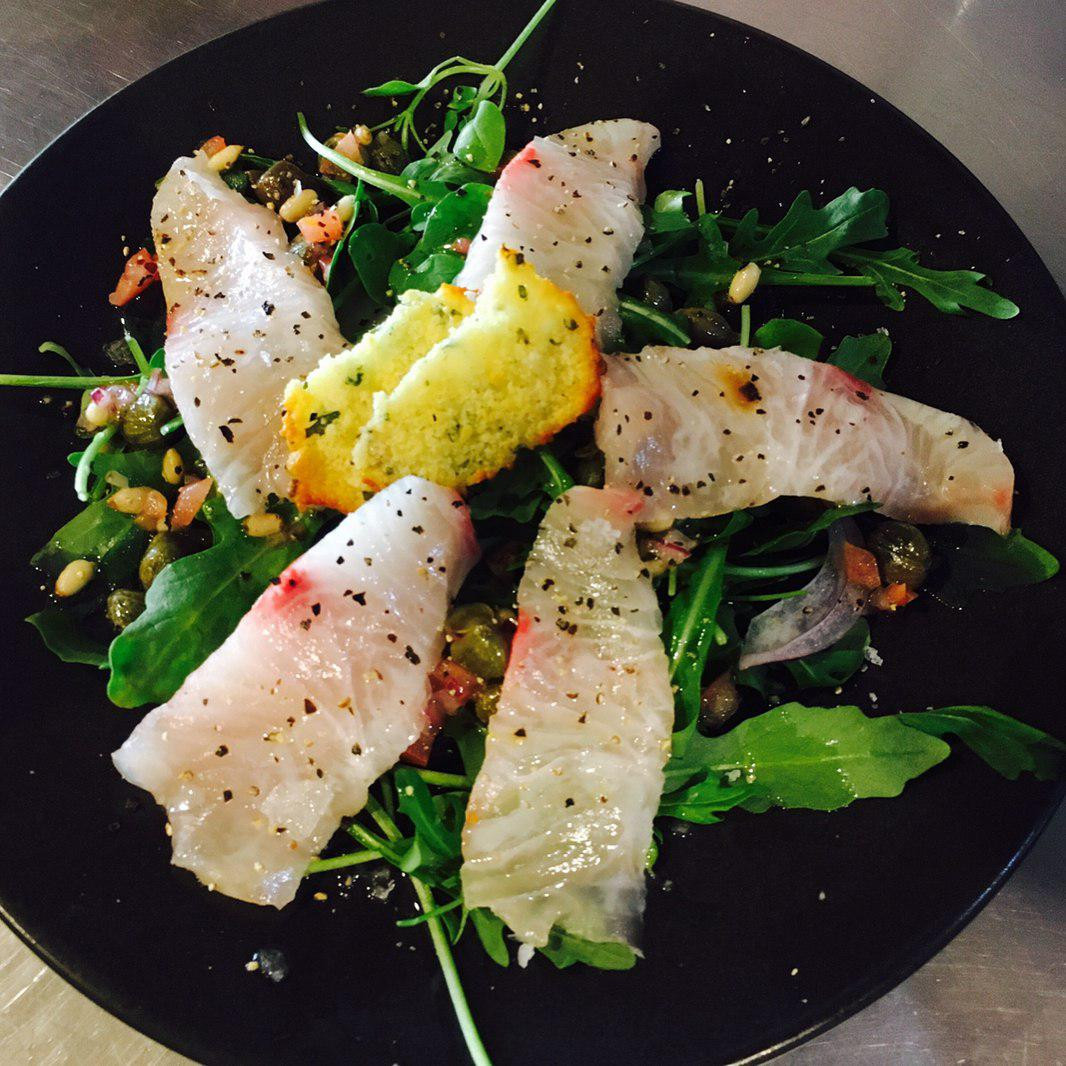 Kingfish ceviche is served for lunch at the end of the tour
Image credit: @delgiornos

You’ll also be brought on an interactive tour to Fresh Fish Place where you’ll see the entire process – from catching the seafood to being sent out to restaurants. There’ll also be a hands-on session where you can help to slice fish and prepare them for meals.

6. Enjoy a picnic with koalas at Mikkira Station 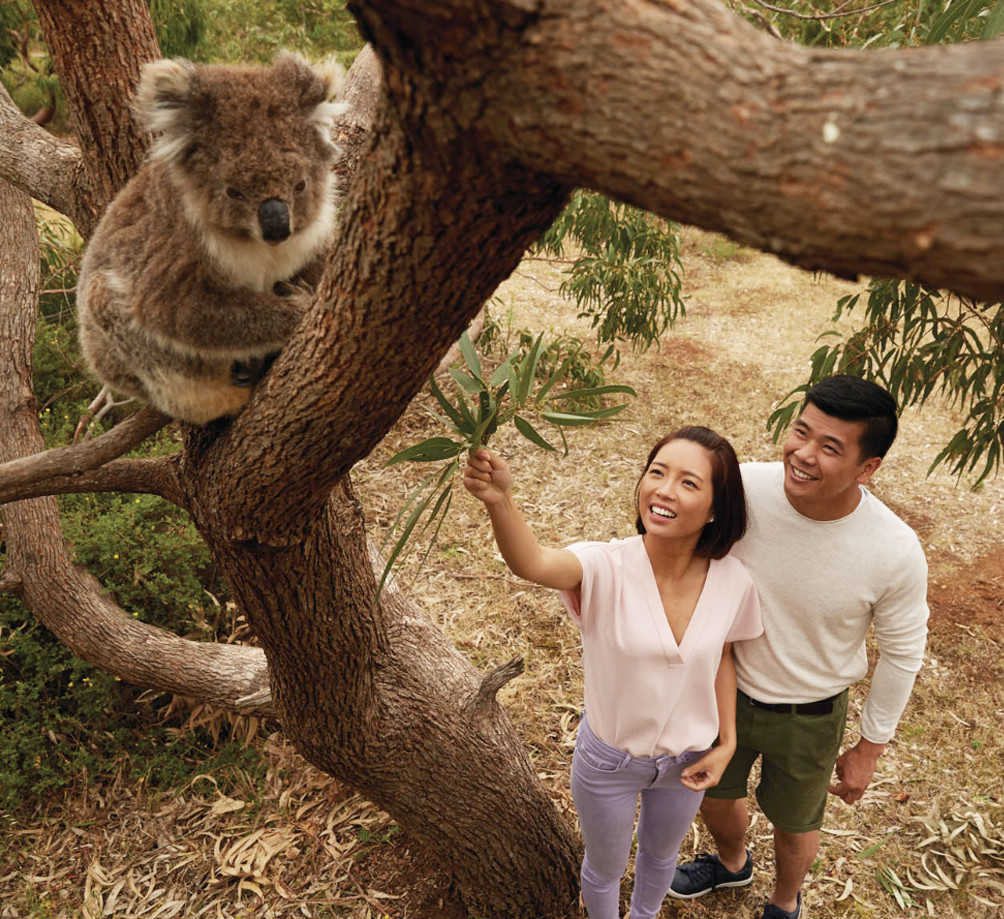 Mikkira Station was once home to early Australian settlers back in the day, but now, the unoccupied house is one of the last remaining habitats in Australia where koalas, emus and kangaroos can be seen roaming freely in the wild.

The place is filled with eucalyptus trees, where koalas climb and snooze the day away. Animals here are known to be extra friendly and curious so don’t be surprised if they crawl up to you to say hi. 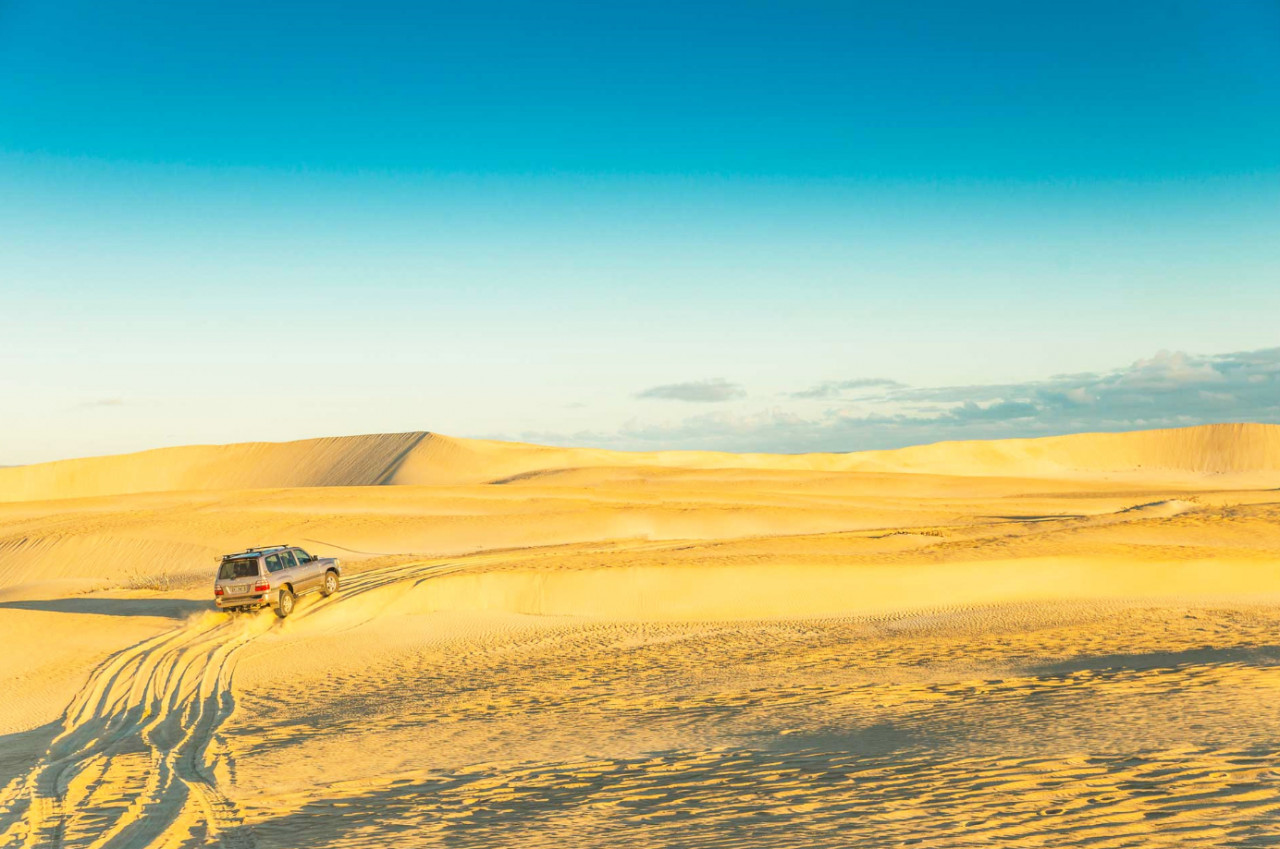 Just 40 minutes away from the CBD is Fleurieu Peninsula, one of Adelaide’s most scenic spots for activities like wine-tasting, strolling through vineyards, and dolphin and whale watching. In this 1-day tour, you’ll be driving through the McLaren Vale region, Adelaide’s most popular wine spot. 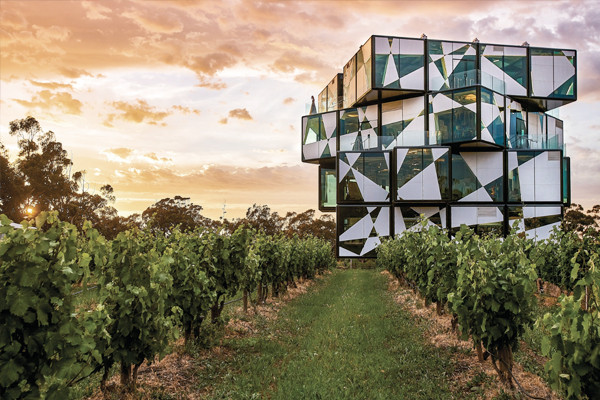 Apart from wine-tasting, you’ll get to see the live process of how wine is manufactured and stored. After all that walking, it’s time to indulge in the vineyards freshest wines paired with delicious meals.

The d’Arenberg Cube has two restaurants – d’Arry’s Verandah Restaurant, and d’Arenberg Cube Restaurant, both of which serve up western cuisine along with various wine-pairing options. As you stroll along the vineyards, you’ll be able to catch the breath-taking views of the Great Southern Ocean and Kangaroo Island. 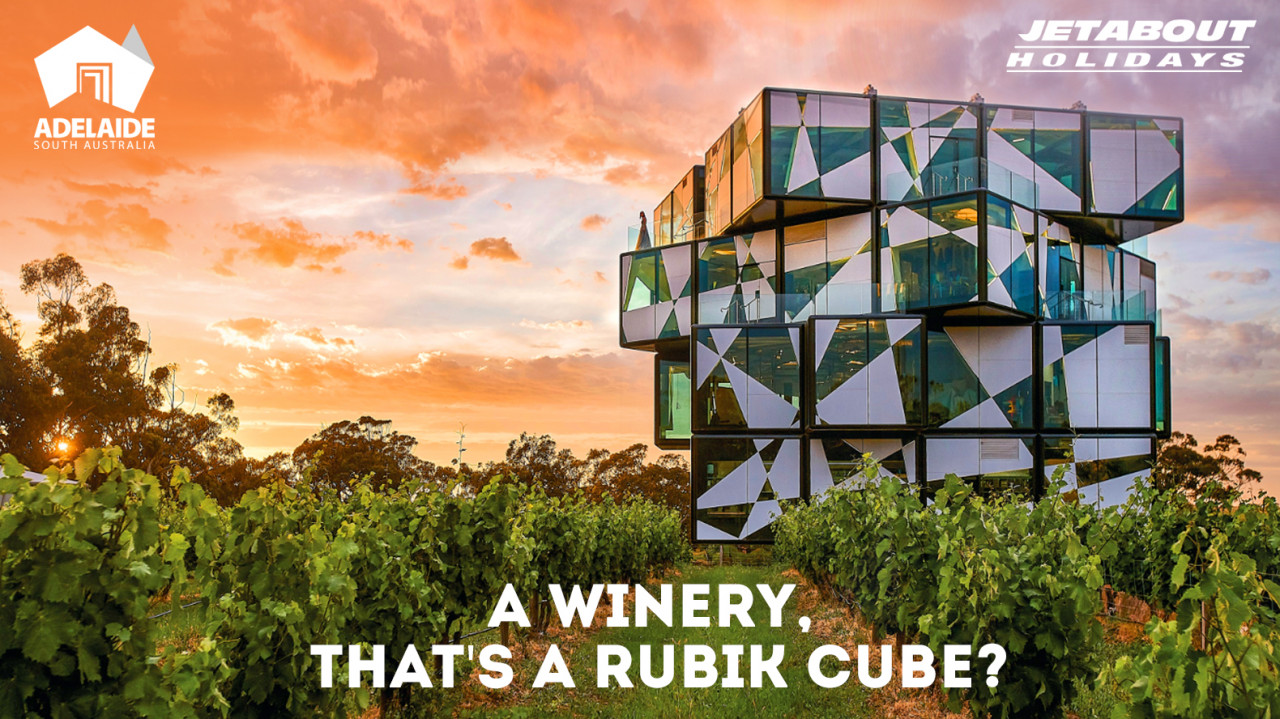 Going on a trip is even more relaxing when you don’t have to do any of the planning. In fact, with Jetabout Holidays’ 5D4N Highlights of Adelaide and Port Lincoln Gems of South Island package, you won’t have to worry about where to go or what to do.

Concerned about flight return tickets? Domestic flight transfers? Lunches at Fleurieu Peninsula? Check, check, and check. Starting from just $1585 per person, activities, like shucking oysters in the middle of the ocean and swimming with sea lions, are all part of the plan.

The best part? You wouldn’t need to lift a finger in planning as everything’s already arranged and booked for you. Now, just enjoy meeting the friendly faces and exploring the sunny beaches of South Australia.

This post was brought to you by Jetabout Holidays & South Australian Tourism Commission. 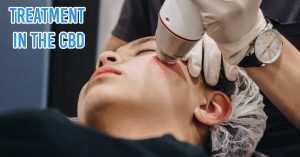 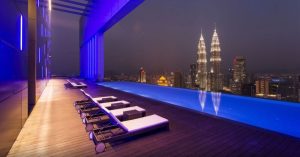