Reap the rewards of Pokemon Go 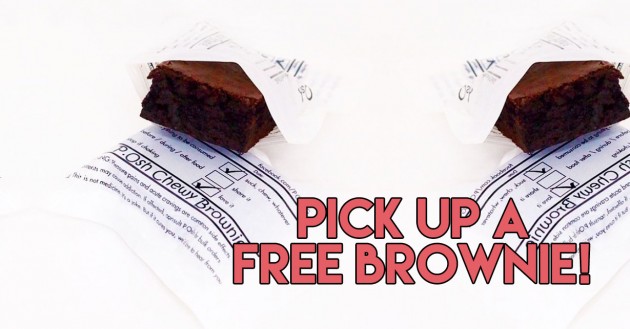 Some folks play Pokemon Go because all their friends are playing. Others (like me) have made it their mission to catch ‘em all. No matter what kind of player you are, there’s definitely a sense of satisfaction when you catch a rare Pokemon, or when you’ve collected the 400 candies required to turn that useless Magikarp into Gyarados.

But there are other ways to get that sense of reward from playing Pokemon Go, and they come in the form of actual tangible rewards – like shops. Shops who offer you freebies and discounts, just because you’re one heck of a Pokemon Trainer.

Here are 10 places in Singapore that reward you for playing Pokemon Go – all those misaimed curveballs don’t matter anymore. 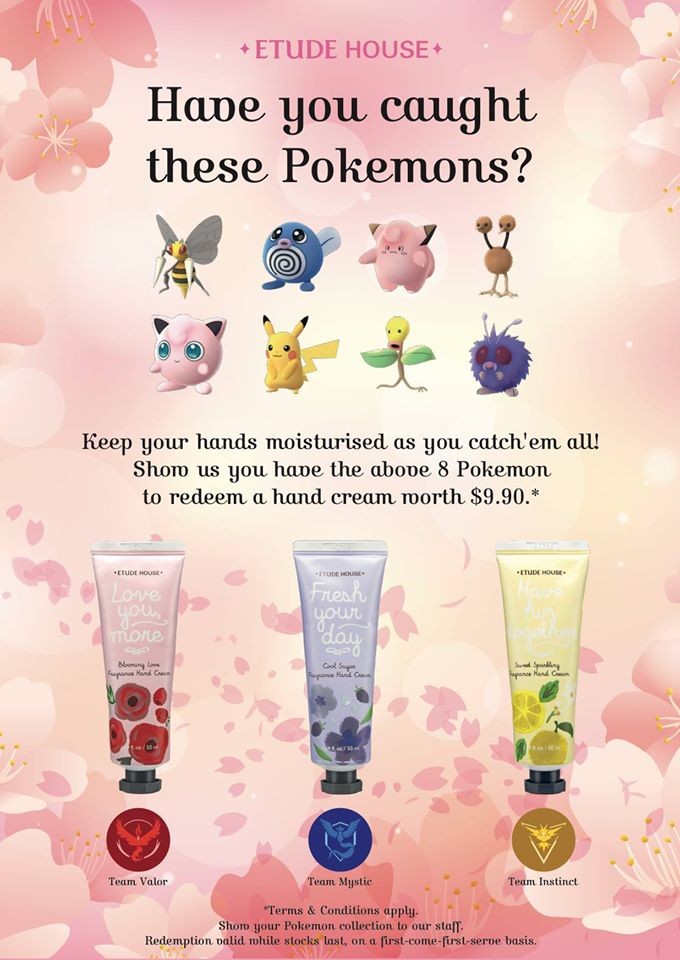 All that swiping and tapping on your screen takes a toll on your hands, so treat yourself after a day of Pokemon hunting to some moisturising hand cream!

Etude House is giving away free hand lotion from their Snow Dessert range  if you’ve caught the 8 Pokemon featured above. And depending on what team you’ve joined, you’ll get a different scent of hand cream. I’m one Pikachu away from getting the Cool Sugar one. 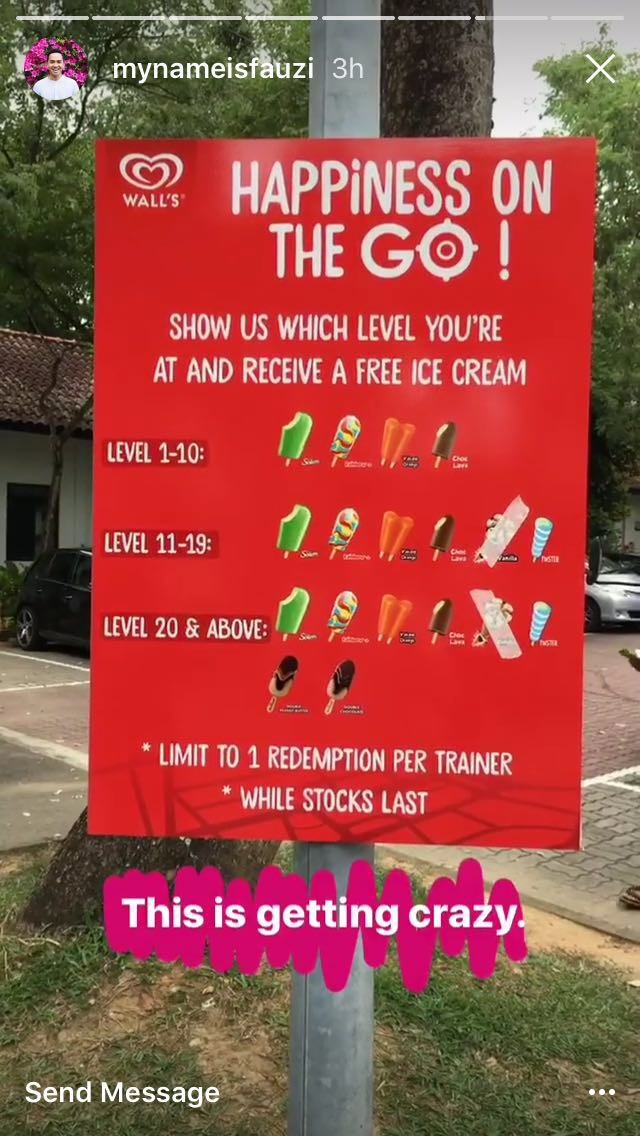 Pokemon hunting often leaves you exhausted, tired, and hungry – so what better way to cool off than with delicious free ice-cream?

Parks are full of Pokemon trainers swiping at lures and catching Pokemon, so Wall’s has set up an ice-cream truck in Punggol Park to reach out to these players. Nothing beats a yummy Paddle Pop popsicle after spending a few hours trying to find that elusive Snorlax, right?

The varieties of ice-cream you can get increases as your Pokemon Go level goes higher, so level up and be spoilt for choice! 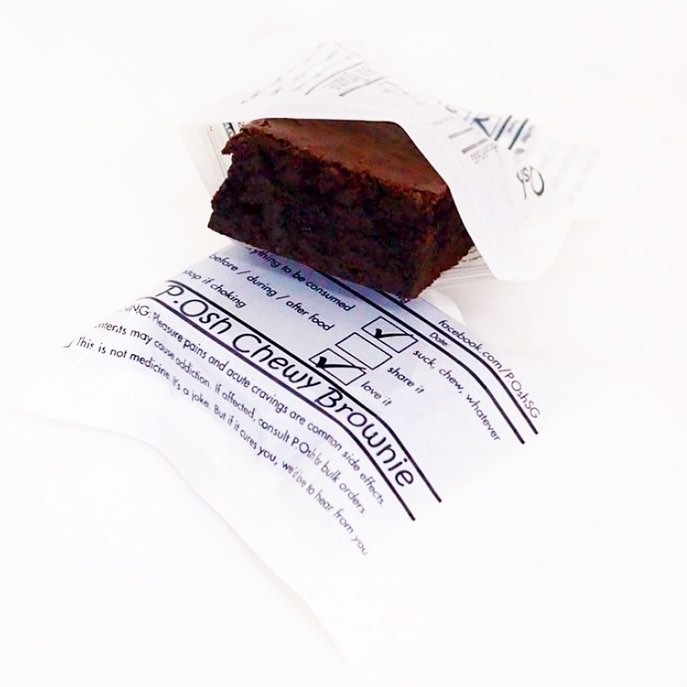 If you’re feeling hungry while hunting Pokemon in Tanjong Pagar (which is rich in both Pokestops and lures), pop by the Megafash outlet at 100AM. Show them that you’re a skilled trainer of at least level 25, and you could get a free brownie by Posh Be Good to fuel you up on your Pokemon adventure. 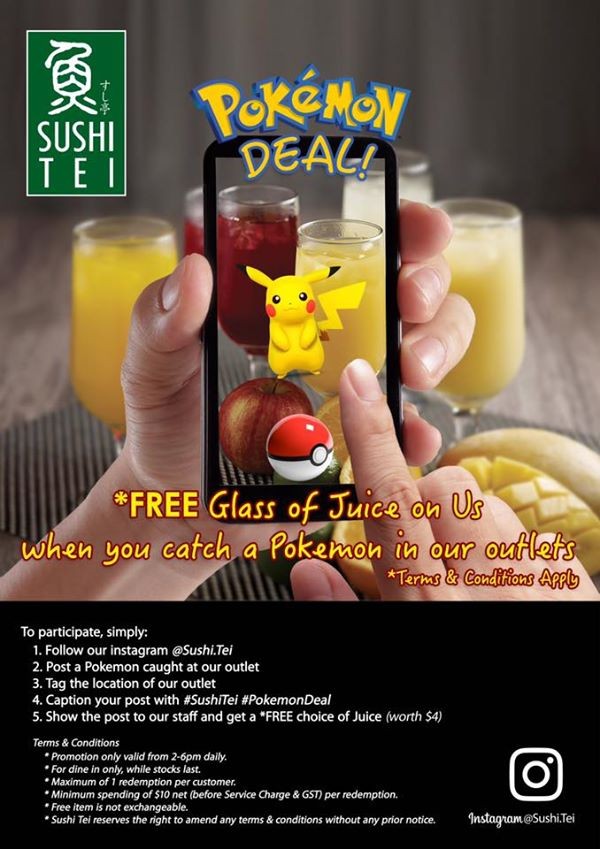 Having a meal at Sushi Tei and spy a little Poliwag sitting next to your sushi? Simply screenshot it, upload it to Instagram, and you can get a free glass of juice to go with your lunch.

Be sure to follow the instructions as shown above, and you’ll be sipping your way to refreshing happiness in no time. 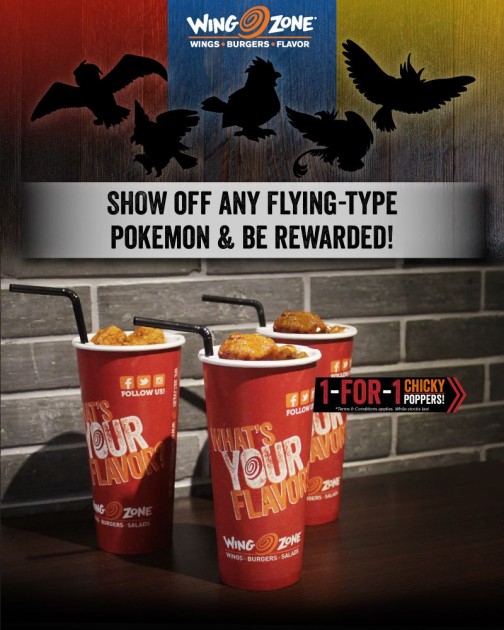 Wings Zone really wants you to catch those flying-type Pokemon. So much that they will give you a free set of Chicky Poppers for every one that you buy. Are you actually eating those bird Pokemon? Let’s try not to think about that. 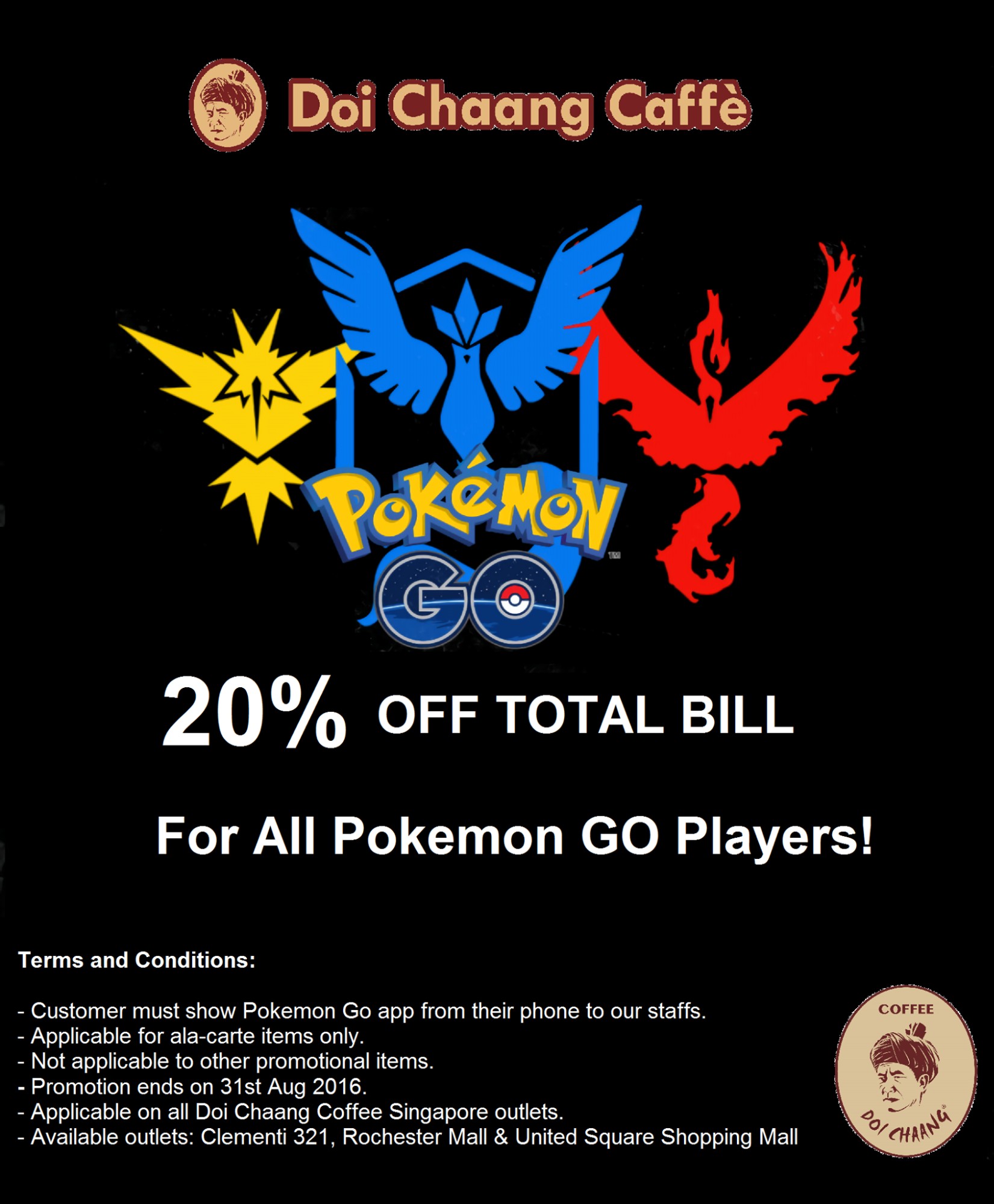 Till 31st August, all you have to do at Doi Chaang is show them your Pokemon Go app, and tada! That’s 20% off the bill for you. It only applies to a la carte items, but that’s fine – 20% of that cup of delicious coffee and a nice slice of cake is enough to perk anyone up while on their Pokemon hunting adventure. 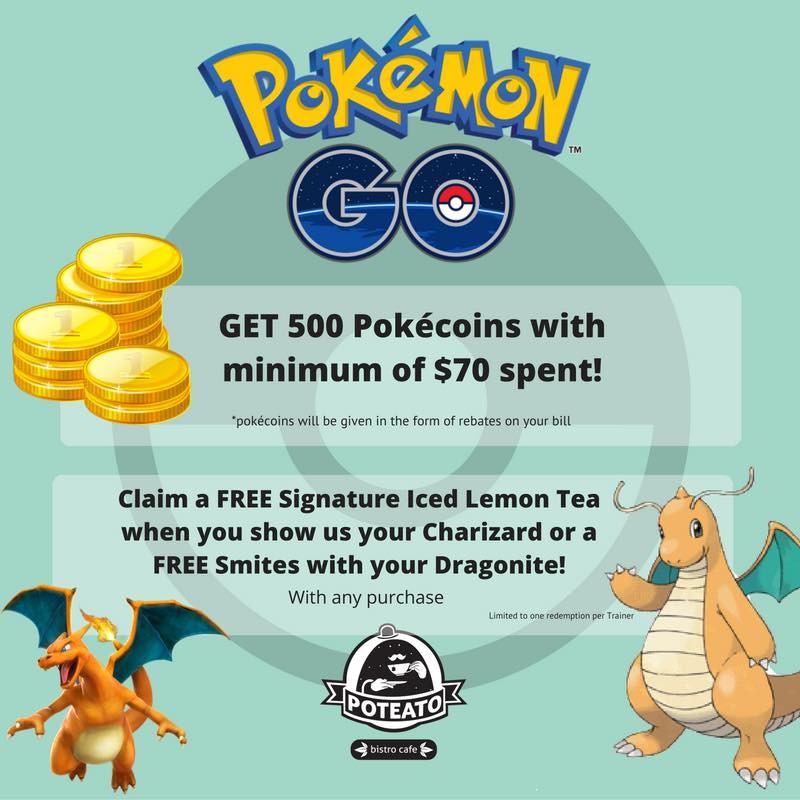 PoTeaTo is known for their tea, and for their potatoes, and now they’re rewarding you for playing Pokemon. Spend more than $70 in a single bill, and get 500 Pokecoins in rebates on the bill – that’s about $6 off!

Plus, if you have a Charizard or a Dragonite, you get some freebies with your purchase. A Charizard gets you a free Iced Lemon Tea, but a Dragonite nets you a free SM.ITES – a platter of potatoes, sausages or chicken served with two yummy dips. 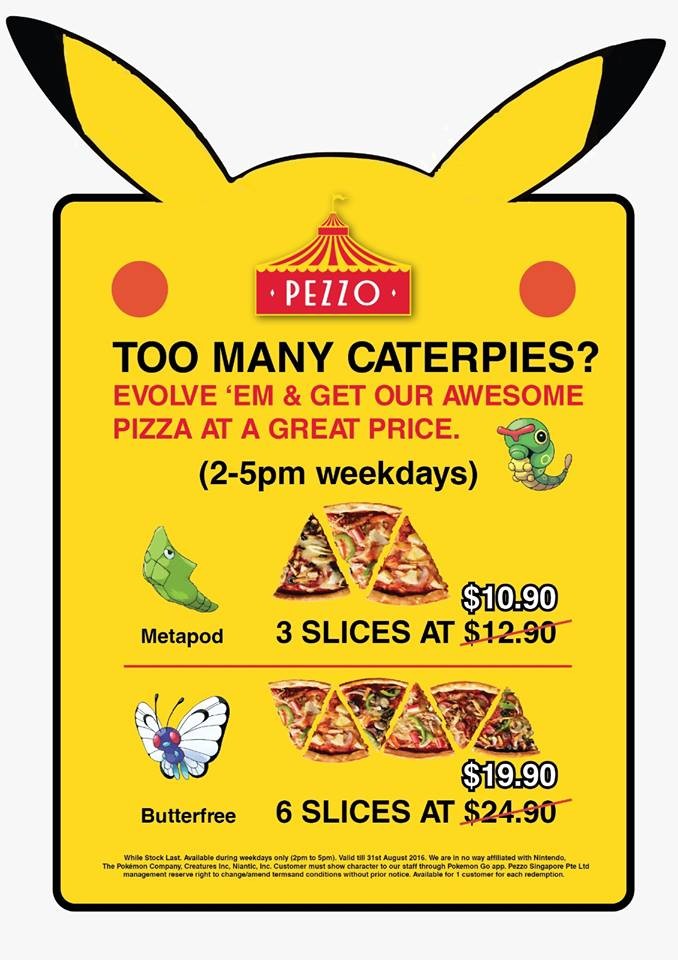 Caterpie show up everywhere, and while they’re nowhere near as irritating as Zubat, they can still be a nuisance. So put them to use by evolving them for pizza at Pezzo!

Pizza is bae, and getting it at a discount just makes it even better. A Metapod nets you 3 slices of pizza for just $10.90, and a Butterfree gets you 6 slices for only $19.90 – that’s enough to feed three people at only about $6.50 per head.

The promotion ends of Aug 31, so move quickly before it’s too late.

9. Crave Nasi Lemak and Teh Tarik 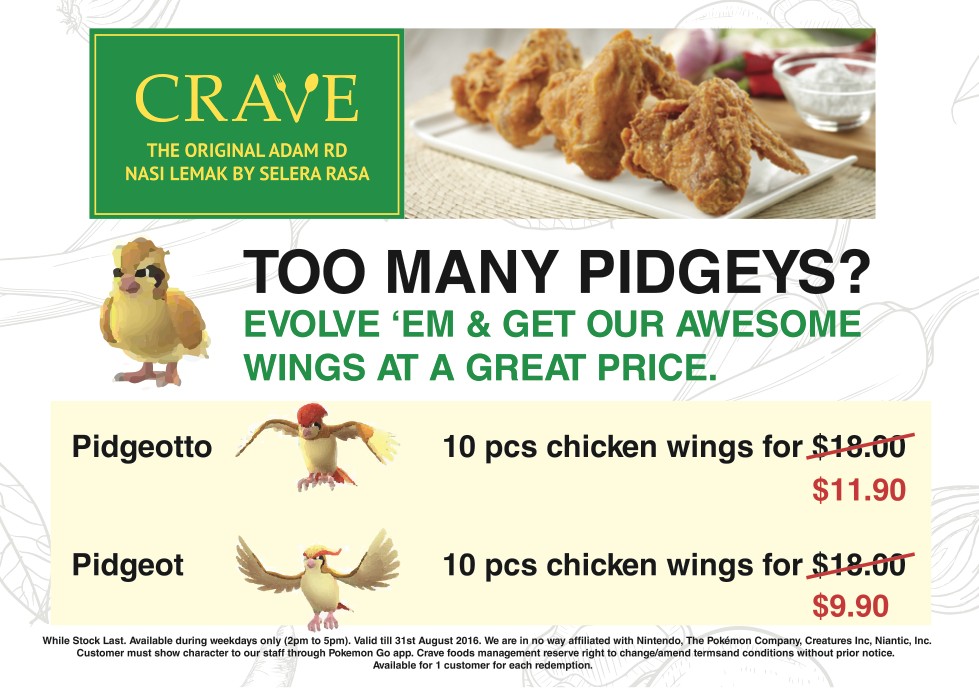 Another promotion that makes use of pesky Pokemon we don’t really need, CRAVE is offering discounts on their chicken wings if you evolve the dumb pigeon equivalent in the Pokemon World.

Evolve your Pidgey into a Pidgeotto and get 10 pieces of delicious chicken wings at $11.90, and evolve that Pidgeotto into a Pidgeot for an even greater discount – 10 pieces of chicken for $9.90! That’s less than a dollar per wing, and probably cheaper than eating KFC.

This promo only runs till 31 August, so be swift! Much like a Pidgeot. 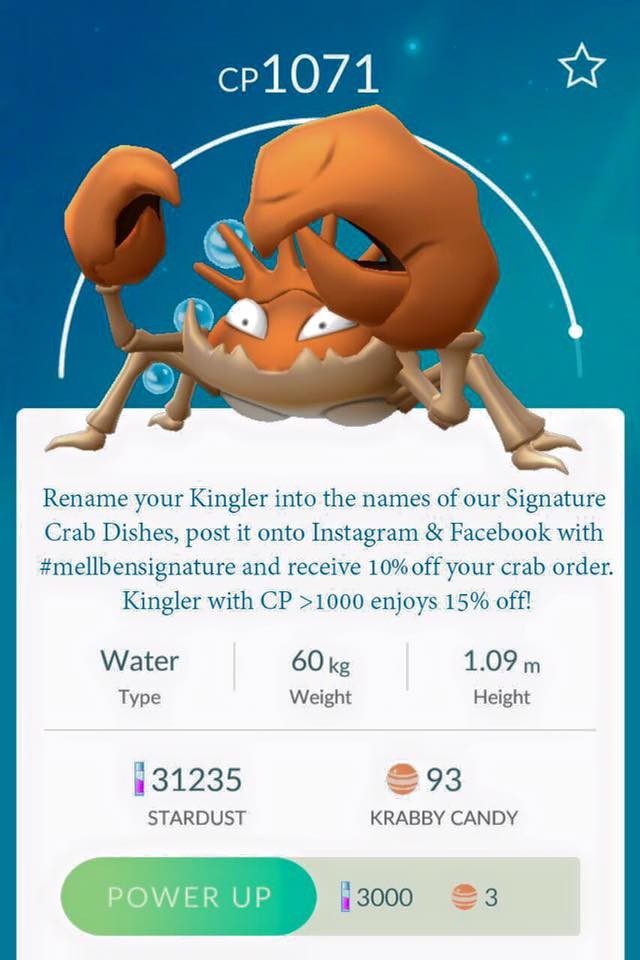 Singaporeans love crabs. Some of us consider chilli crab to be one of our national dishes. And nothing makes eating crab better than being able to get it at bargain – which is where Kingler comes in.

Name your Kingler after Mellben’s signature crab dishes, and post it on Facebook and Instagram with the hashtag #MellbenSignature. Just like that, you’ll receive 10% off your crab order, and 15% off if your Kingler has a CP higher than 1000.

Plus, now that the new Pokemon Go update has introduced appraisals, it’ll be pretty funny to name your Kingler 咸蛋螃蟹 (salted egg crab) and have Blanche tell you how large it is.

The promotion has been extended to 30 Sep, so make the most of it and enjoy your delicious black pepper crab! I know I will.

Go get them all!

Catching Pokemon is a tough job, and all these freebies and promotions are a nice way to relax after spending a day running around, hatching eggs and catching Magikarp. Besides, who doesn’t love a good discount?

Do you know of any other Pokemon-related promotions in Singapore? Let us know if you do – good things must share hor.

Happy Pokemon hunting, folks! Be safe and have a blast.