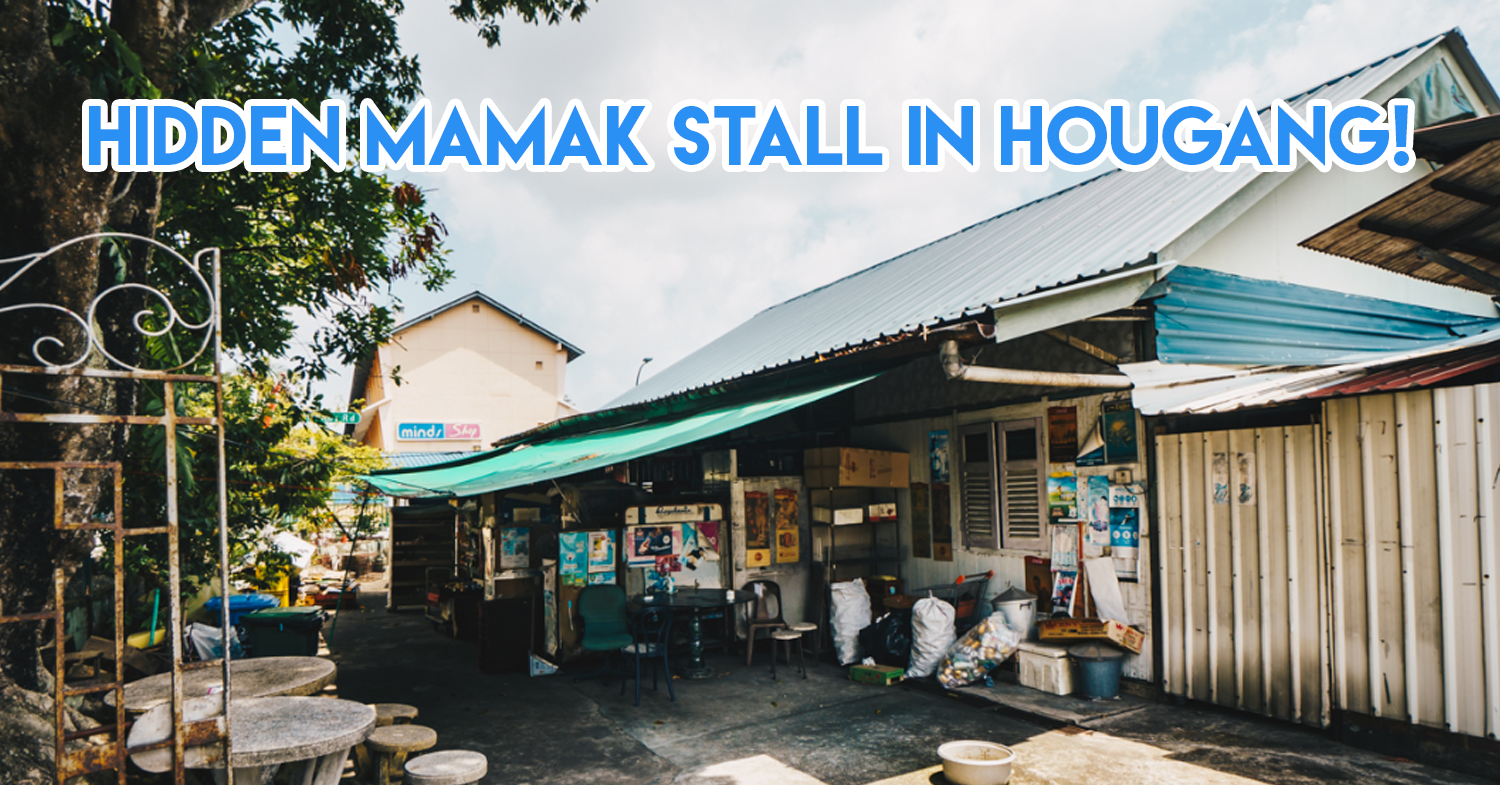 One of my fav’ memories as a kid was spending time at the neighbourhood bike shop. Whether it’s marvelling at the shiny bicycles or watching the uncle repair my tire after I crashed into a wall, there’s something heartening about this rite of passage.

But as modernisation and e-commerce take over, memories like these quietly fade away, leaving us panging for the good old days. Luckily, we’ve scoured the island for establishments that serve as a looking glass into our past. Here are 6 old-school businesses that have stood the test of time.

1. Cheap John’s Enterprise – A family-run bike shop since the 1980s 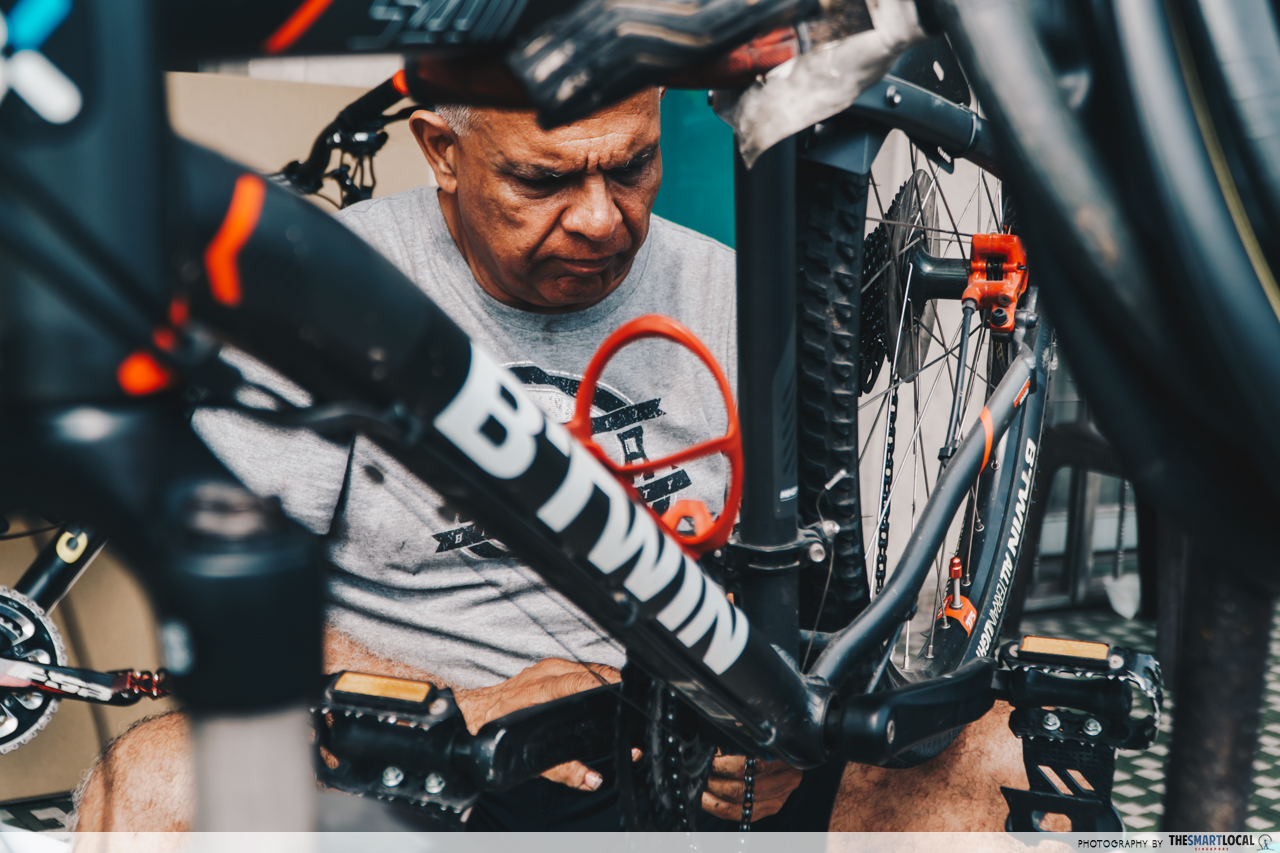 Ever since he was a child, Suresh Balani aka John, has had a passion for bikes. Having lived in Sembawang his whole life, John picked up the trade through apprenticeships from bike shops that surrounded the area back in the day. Eventually, he took over his father’s business and formally established Cheap John’s Enterprises in 1988. 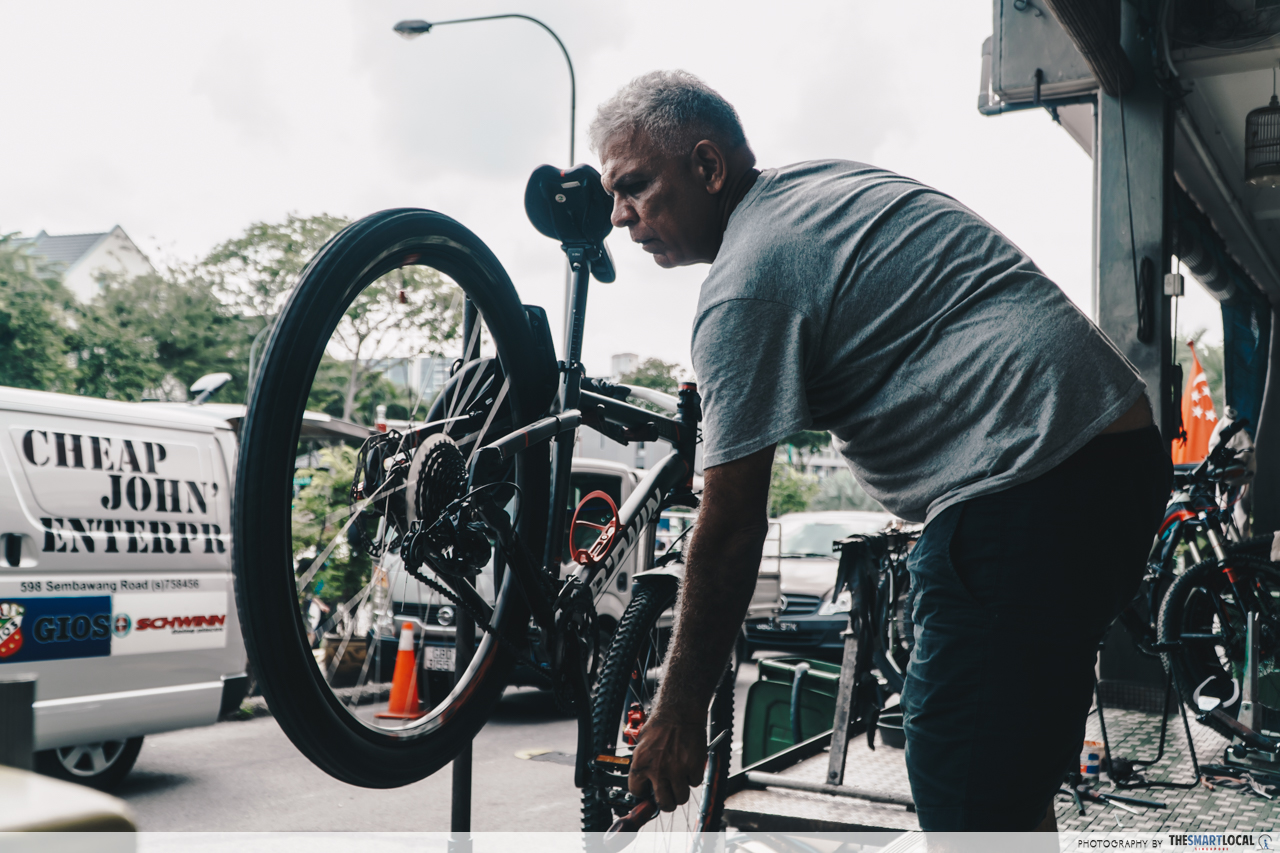 John, 53, personally delivers his bikes to his customers, seeing the process from start to end.

Thanks to his years of hands-on experience and a strong network with factories overseas, you can get a wide selection of quality bikes here.  And unlike other bike shops, you can take the bikes out on a test run before making a purchase. 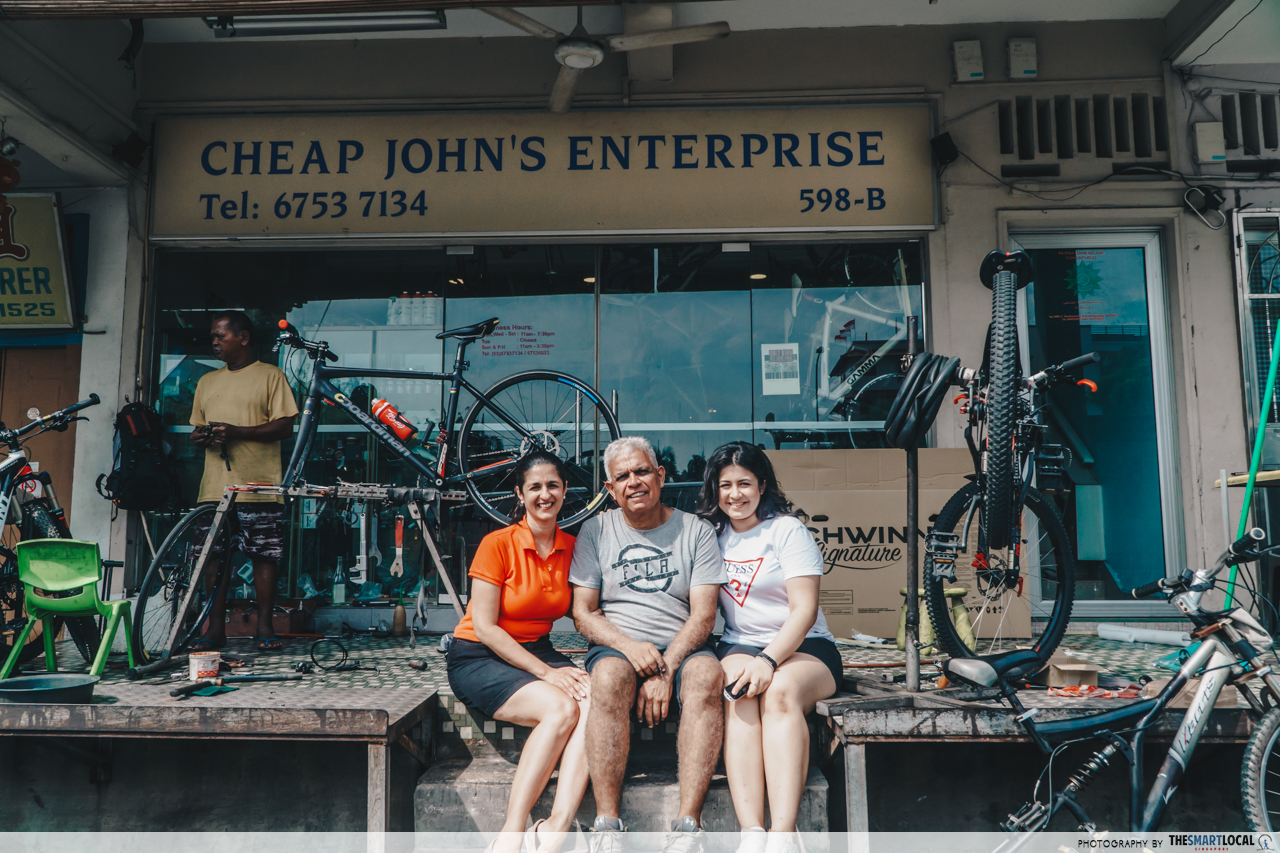 His family also plays an active part in the day-to-day operations. For instance, Mrs John personally sets up meetings with brands’ ambassadors to secure exclusive distribution rights for brands like Schwinn.

Their daughters, Presha and Tanisha, have also brought the business into the 21st century by introducing inventory systems and expanding online through Carousell and Facebook. Tanisha has even set up her own bike shop in Serangoon!

Although John’s received multiple offers to expand his business, he quips that his celebrity-like status and love for the nearby Chinese kopi stall keeps him strongly planted in Sembawang. 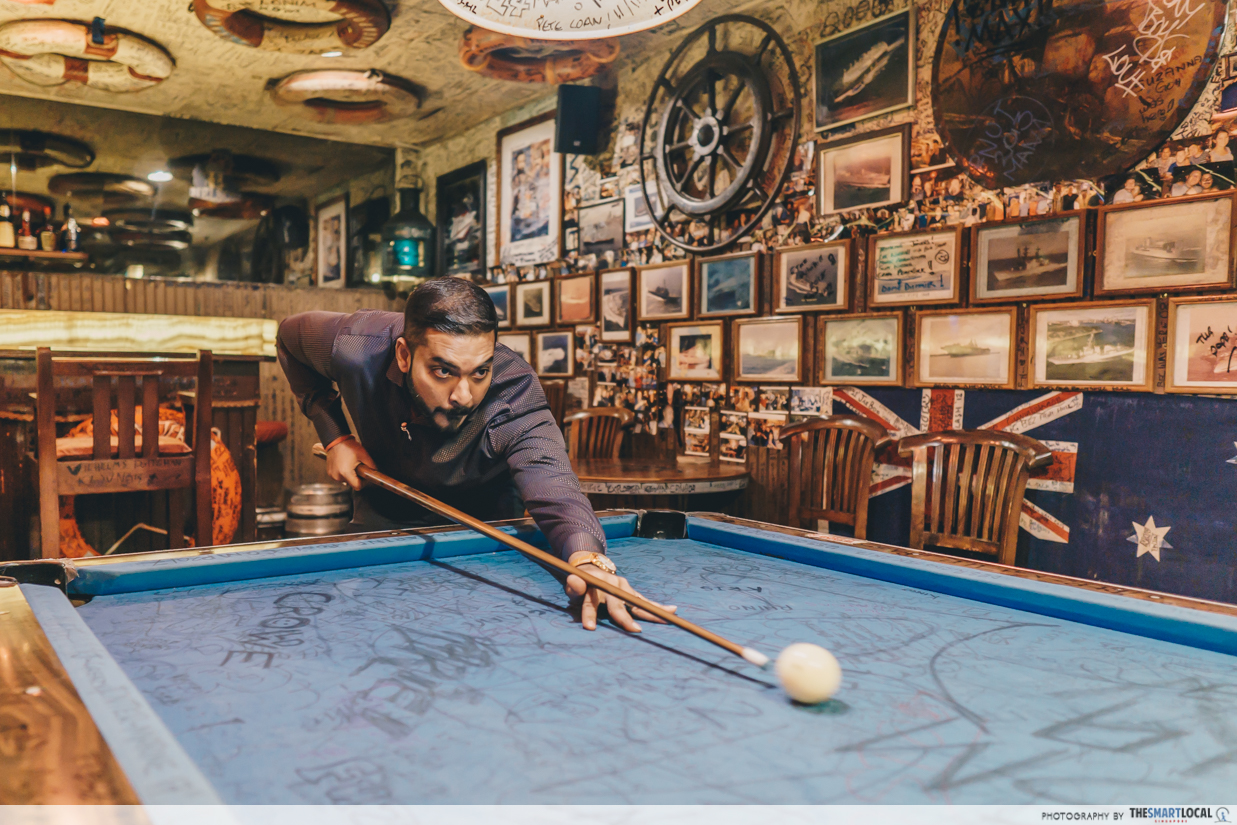 As a youth, Vinod Reddy – now aged 33 – frequented Nelson Bar and bonded over home-cooked food with Ms Lau Bee Heong, the bar’s former owner. When he heard that she’d be retiring, he jumped at the opportunity to take over as he wanted to preserve the bar.

The only surviving sailors’ bar since pre-WWII, Nelson Bar has fiercely loyal customers – consisting of former and current British, American, New Zealand and Australian sailors who docked at Sembawang when it was still a naval shipyard. 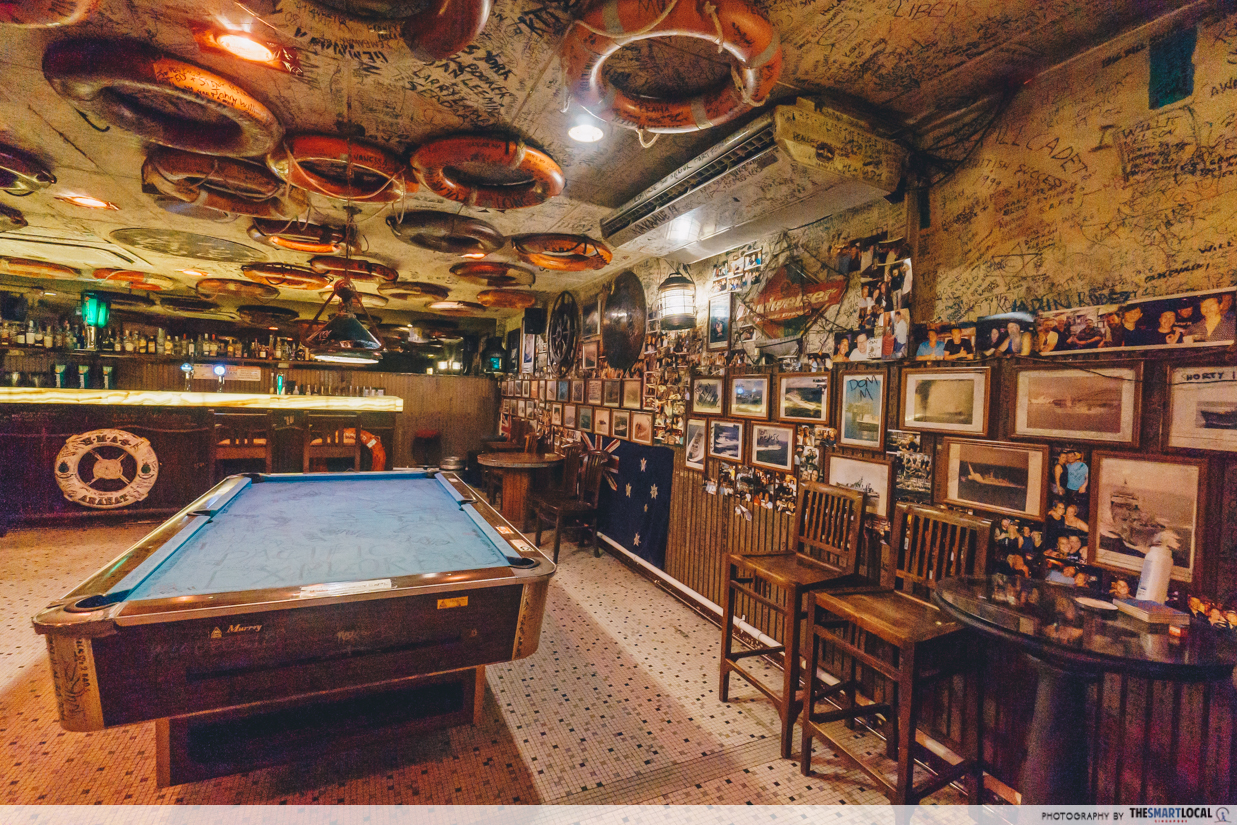 Reddy is adamant about retaining every bit of the bar’s history, refusing to discard anything left by the sailors.

Every piece of furniture and memorabilia here was personally brought in by sailors and captains alike. Even the pool table and chairs were fashioned out of decommissioned ships. 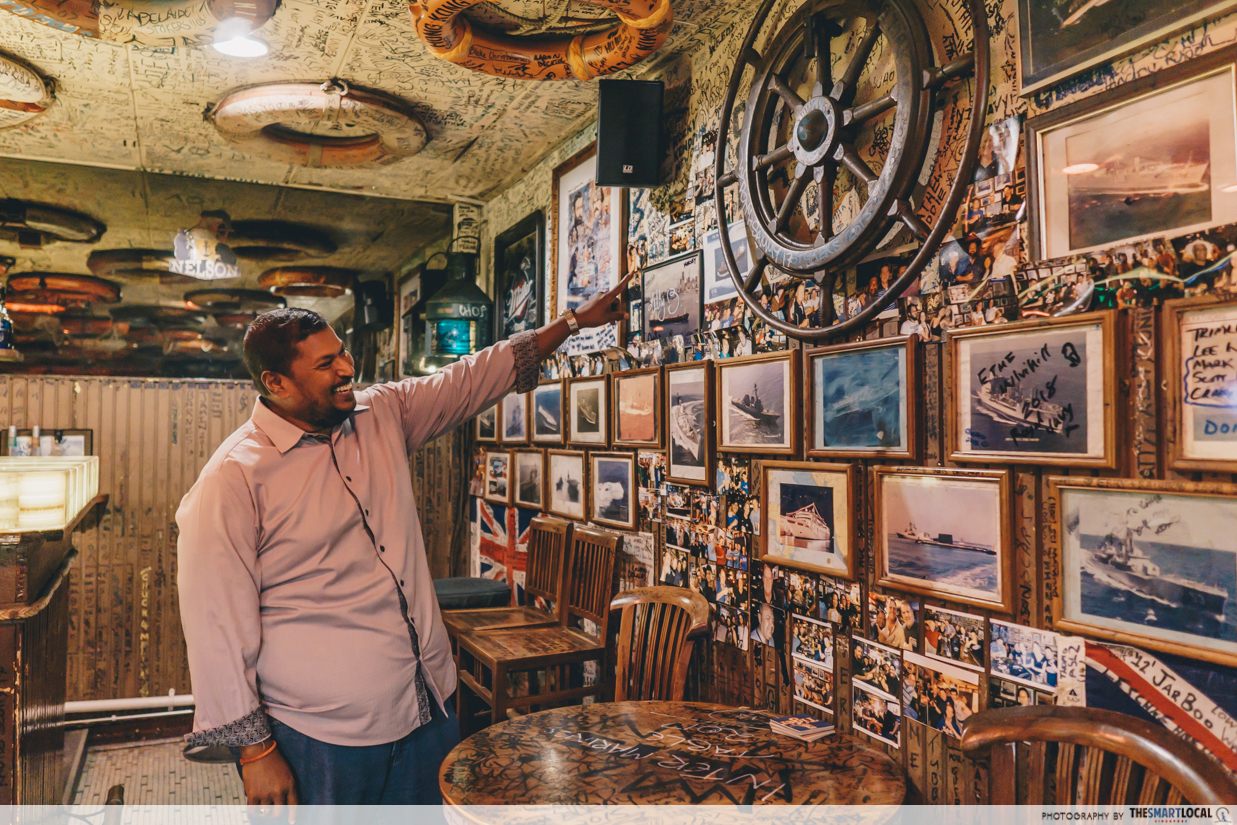 Old photos and life buoys are plastered all over the walls. There’s even steering wheel from the late 1950’s.

It’s also been a long standing tradition for patrons to tag the walls and ceilings in permanent marker – a cool reminder of that “I was here” moment. Sometimes, even 3rd generation sailors make pilgrimages to Nelson, looking for their forefathers’ marks.

In the near future, Reddy plans to expand the bar to Myanmar, creating a familiar home base for sailors in the SEA region. 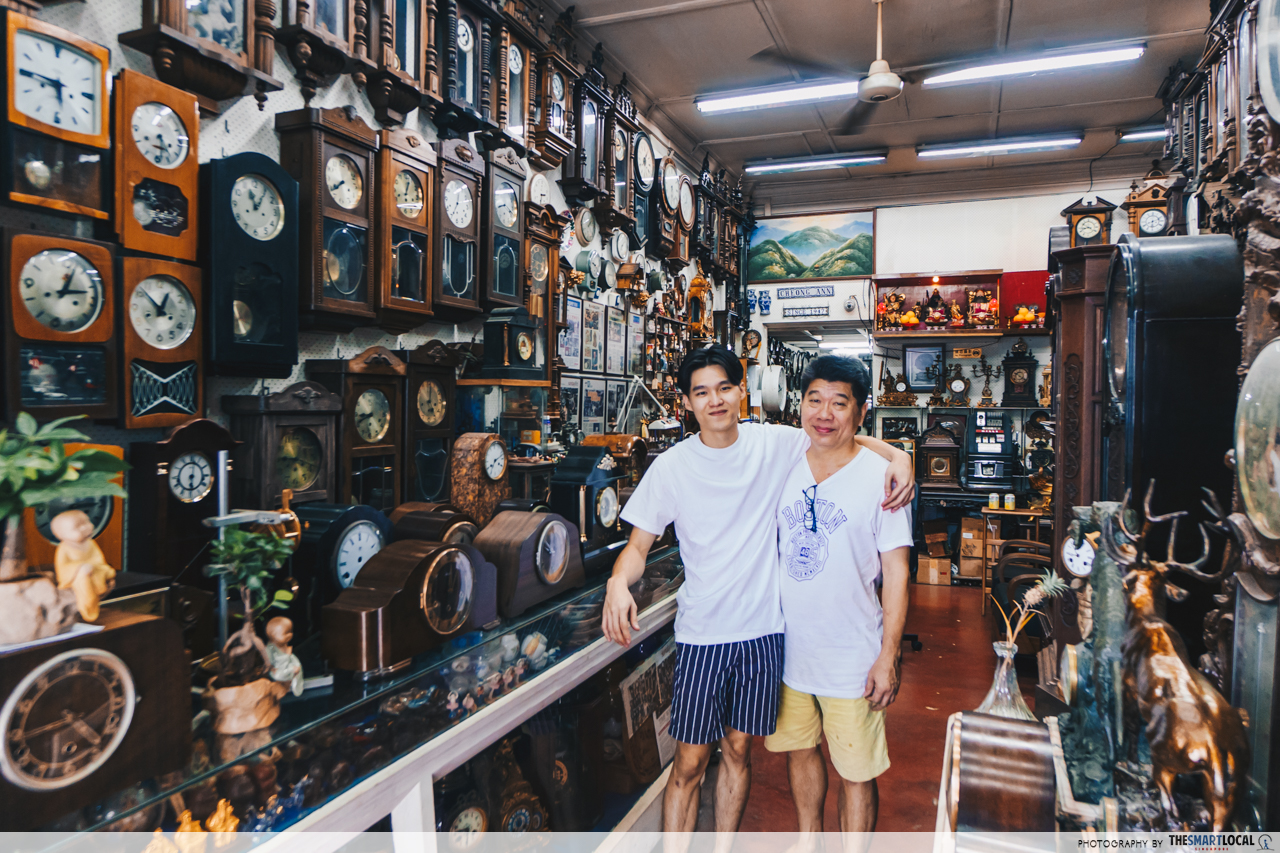 Take a step into Cheong Ann Watch Maker and you’ll be transported to a museum filled with clocks. The establishment started at the end of World War II when founder Lim Gee Lam restored and made clocks from his humble shophouse. As the years passed, Lim Gee Lam handed over the business to his son David Lim, 57. 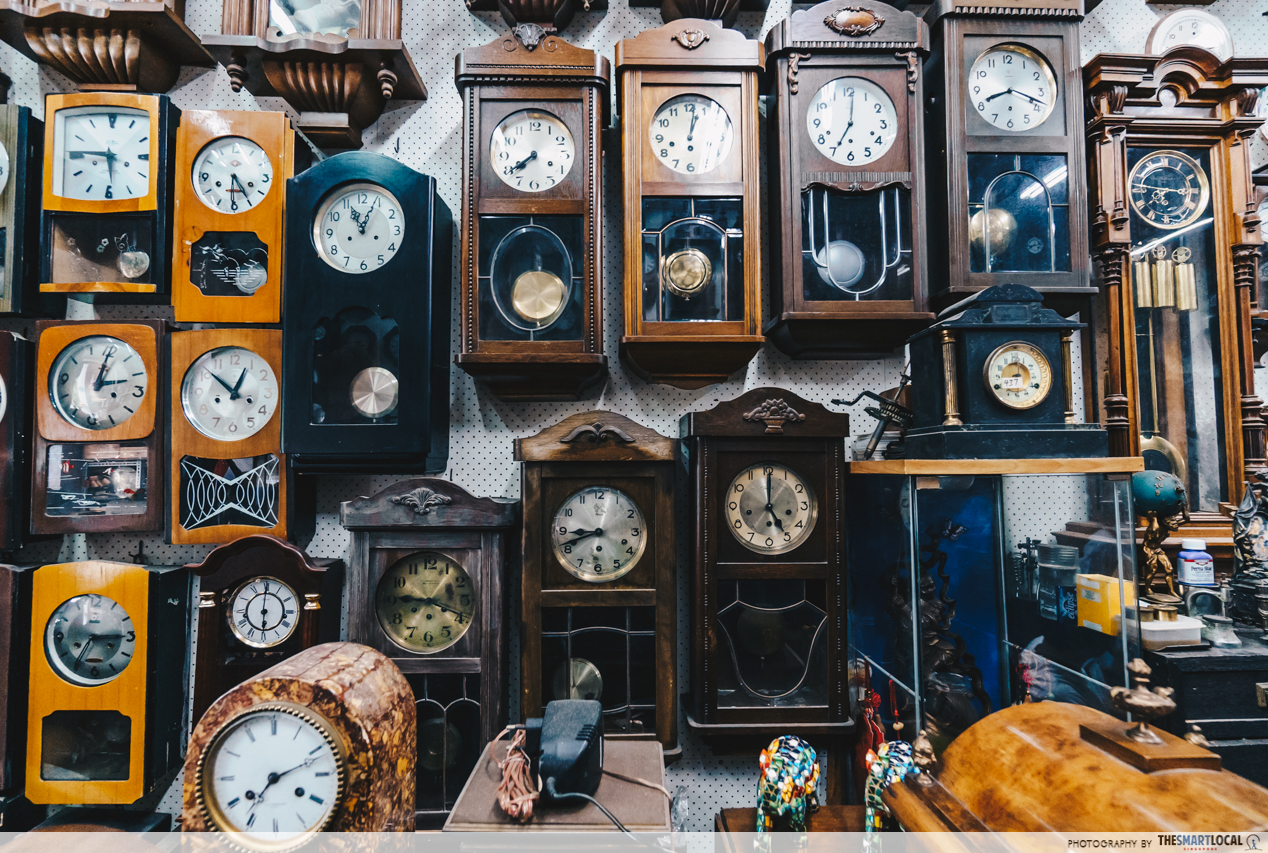 In the past, expats and businessmen frequented the shop to repair their pieces or purchase new ones. With the changing times, however, Mr Lim has seen an influx of couples looking for a unique heirloom pieces and even young antique collectors; the youngest being just 10 years old!

When dealing in antiques, sourcing parts can be arduous. Thankfully, Mr Lim’s son, Shawn, uses modern communication to establish a huge network of collectors from across the world. 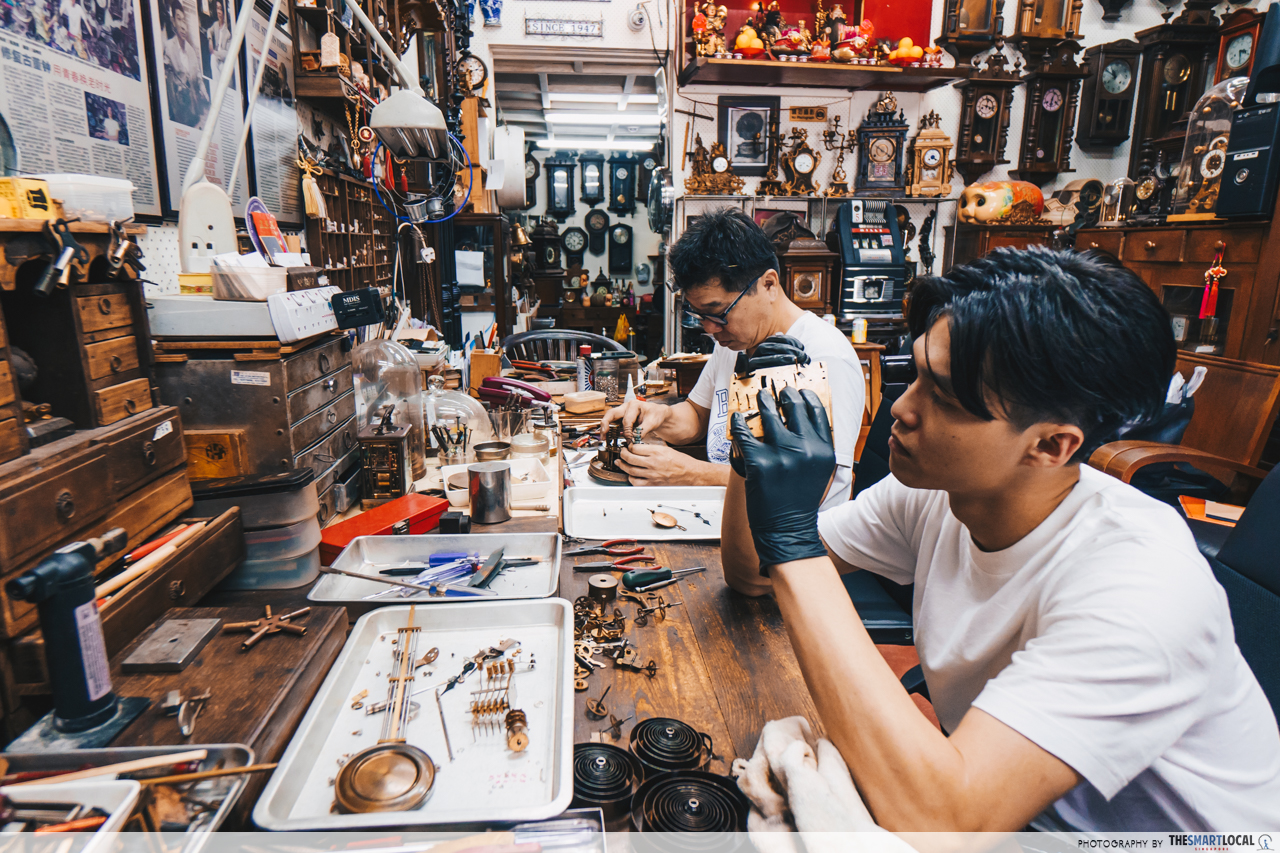 For parts that can’t be found in the market, the father-and-son duo would manufacture these parts from scratch. Besides watches, the shop also deals with a large variety of antiques like musical boxes and slot machines. 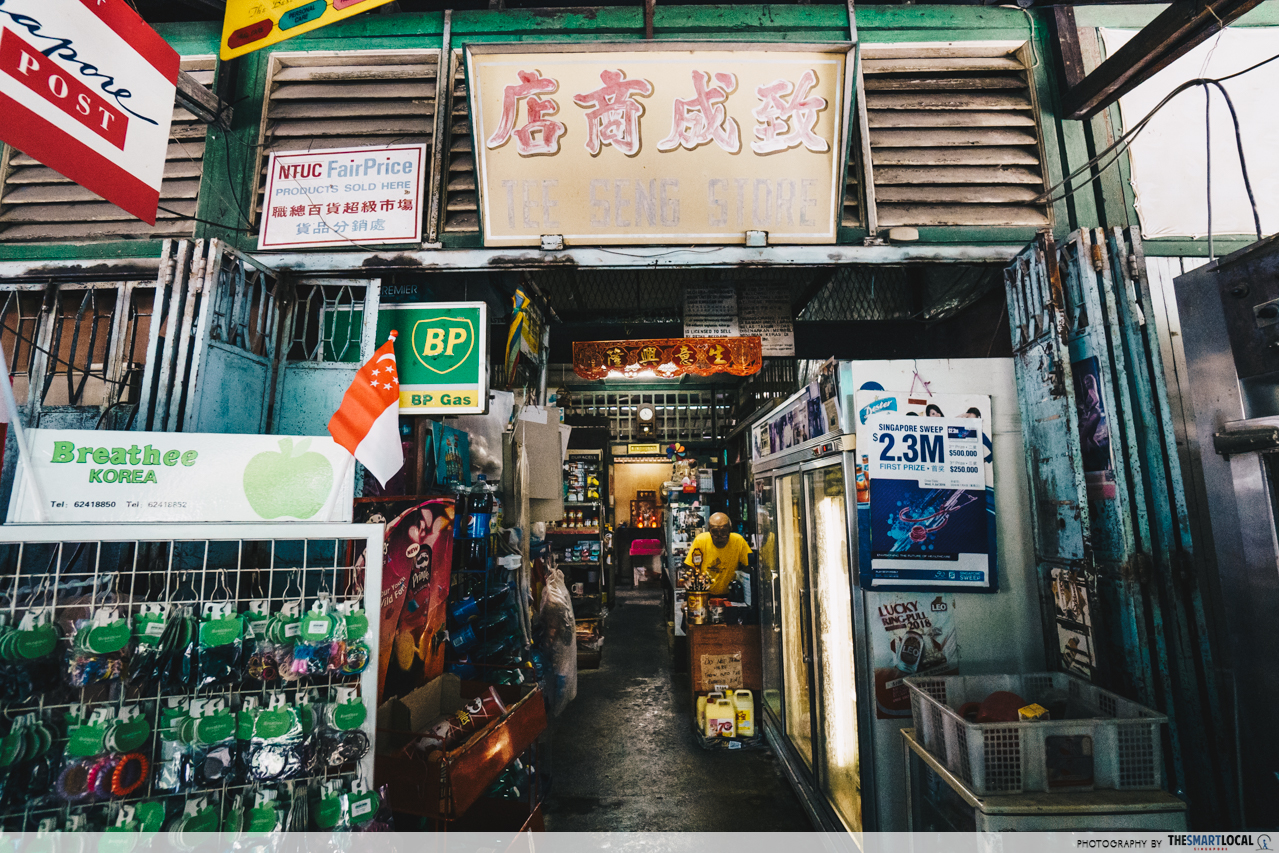 Nestled in the quiet suburban estate of Hougang, Tee Seng Stores has been a long-standing part of the neighbourhood since the 1950s. And part of the mise-en-scène here is Mr and Mrs Ang, who’ve been living and working at this very shop for the past 63 years. 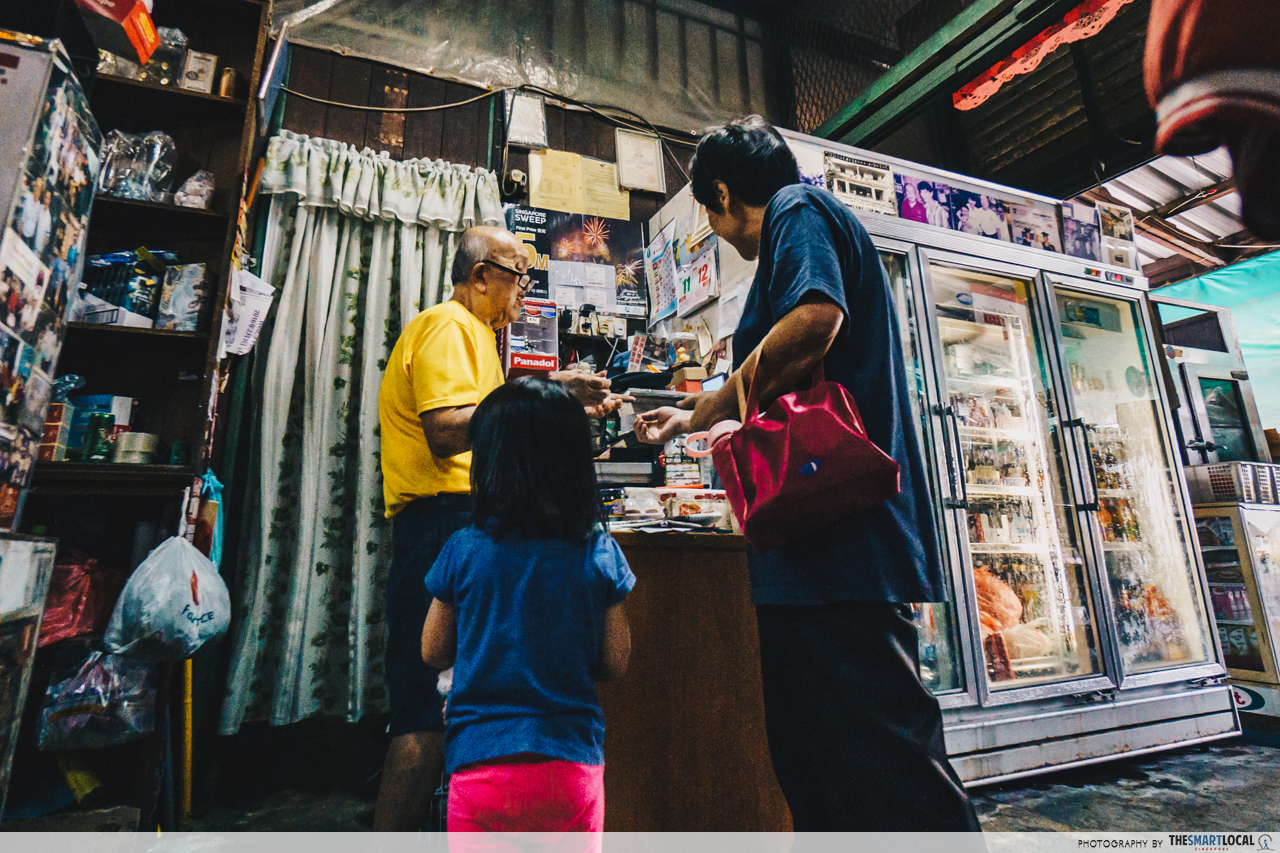 Having been here for so long, Mr Ang has witnessed many of his regulars grow up and start their own family – with some even having their own grandkids! Customers who’ve migrated overseas also make the occasional pilgrimage down to Tee Seng’s  – a testament to Mr Ang’s hospitality. 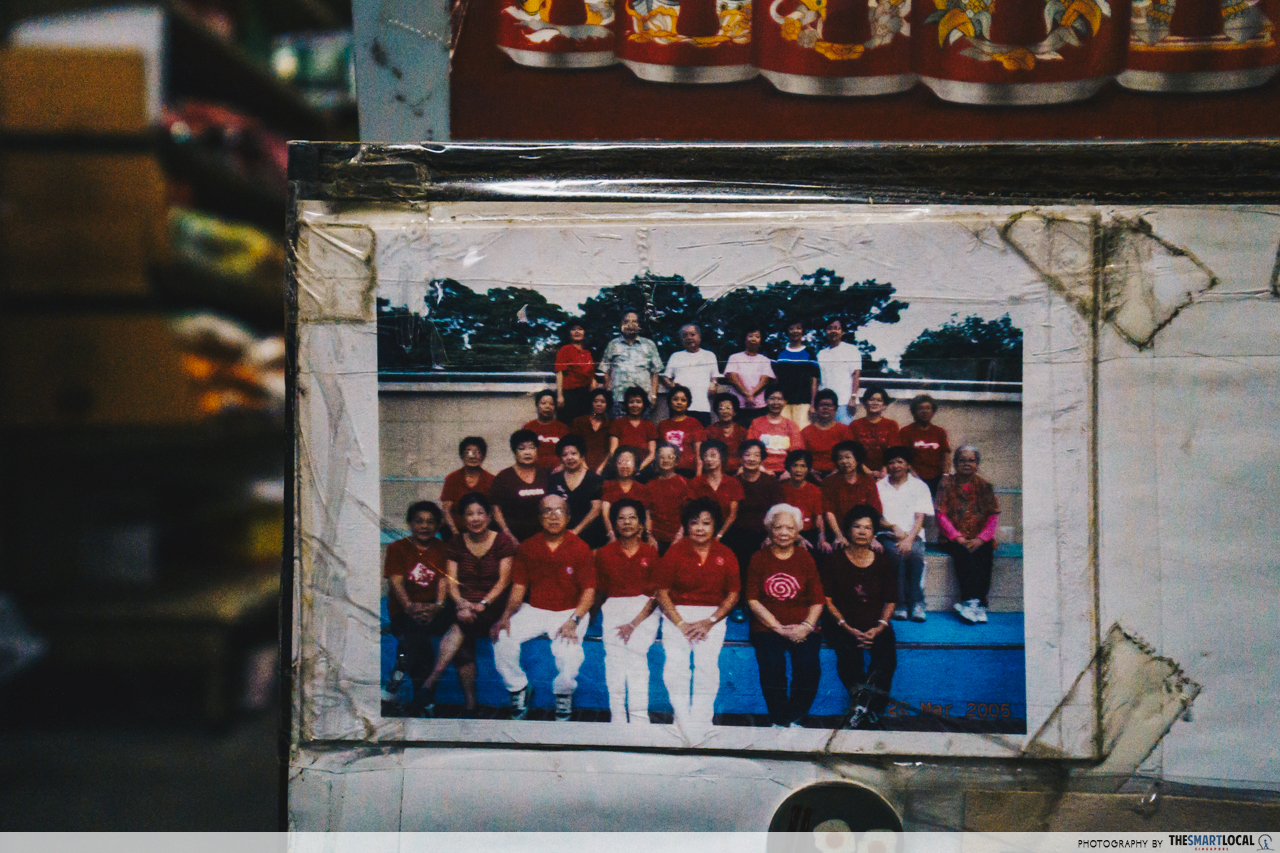 Mr Ang’s daily routine is a simple one: He’ll do Qigong at the park before opening his shop at 8AM to set up and take simple inventory to schedule deliveries for the weeks to come. As lunchtime approaches, Mrs Ang will conscientiously gather ingredients in a roll of newspapers and proceed to the back kitchen to prepare a meal for the pair. 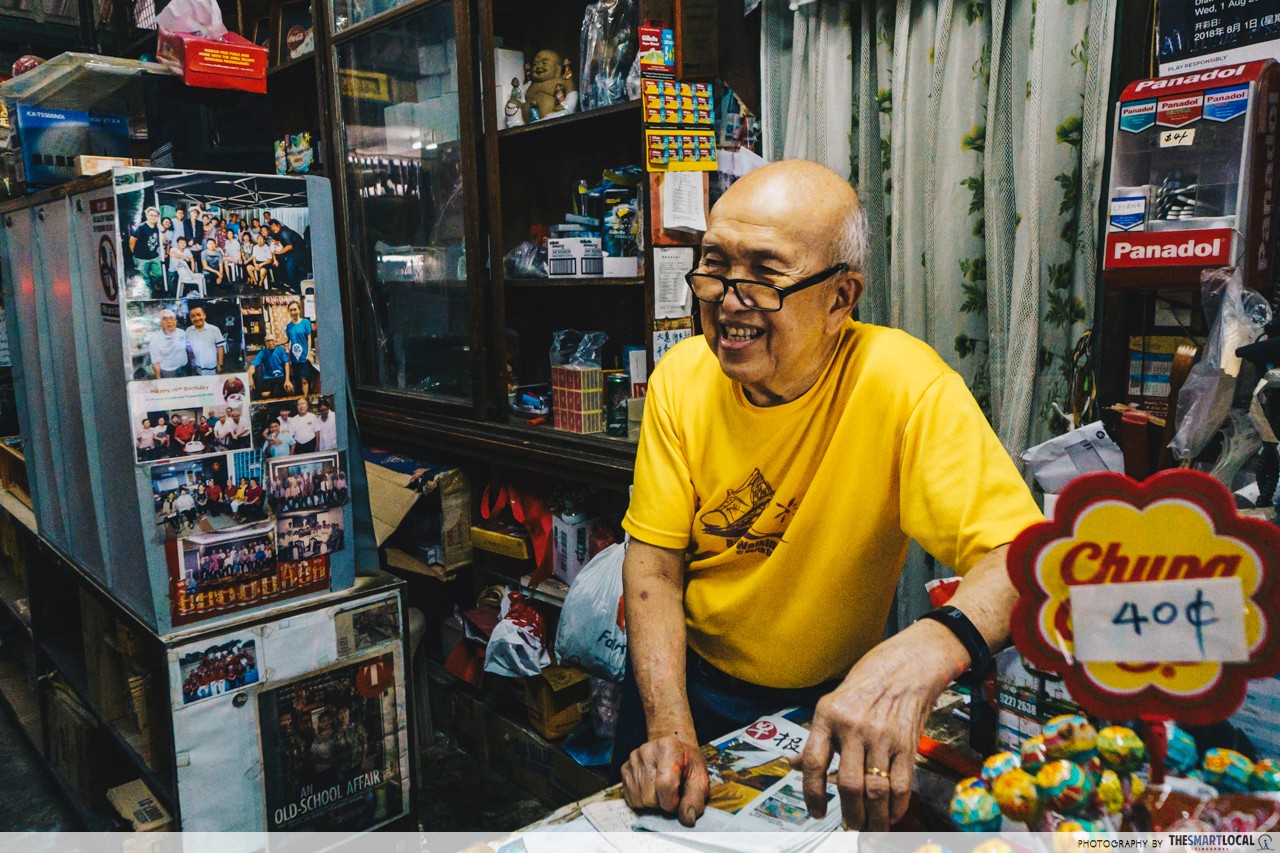 As competition from convenience stores and hypermarkets loom over, future plans for the business are unclear. That said, Mr Ang says he’d happily work here for as long as he can. 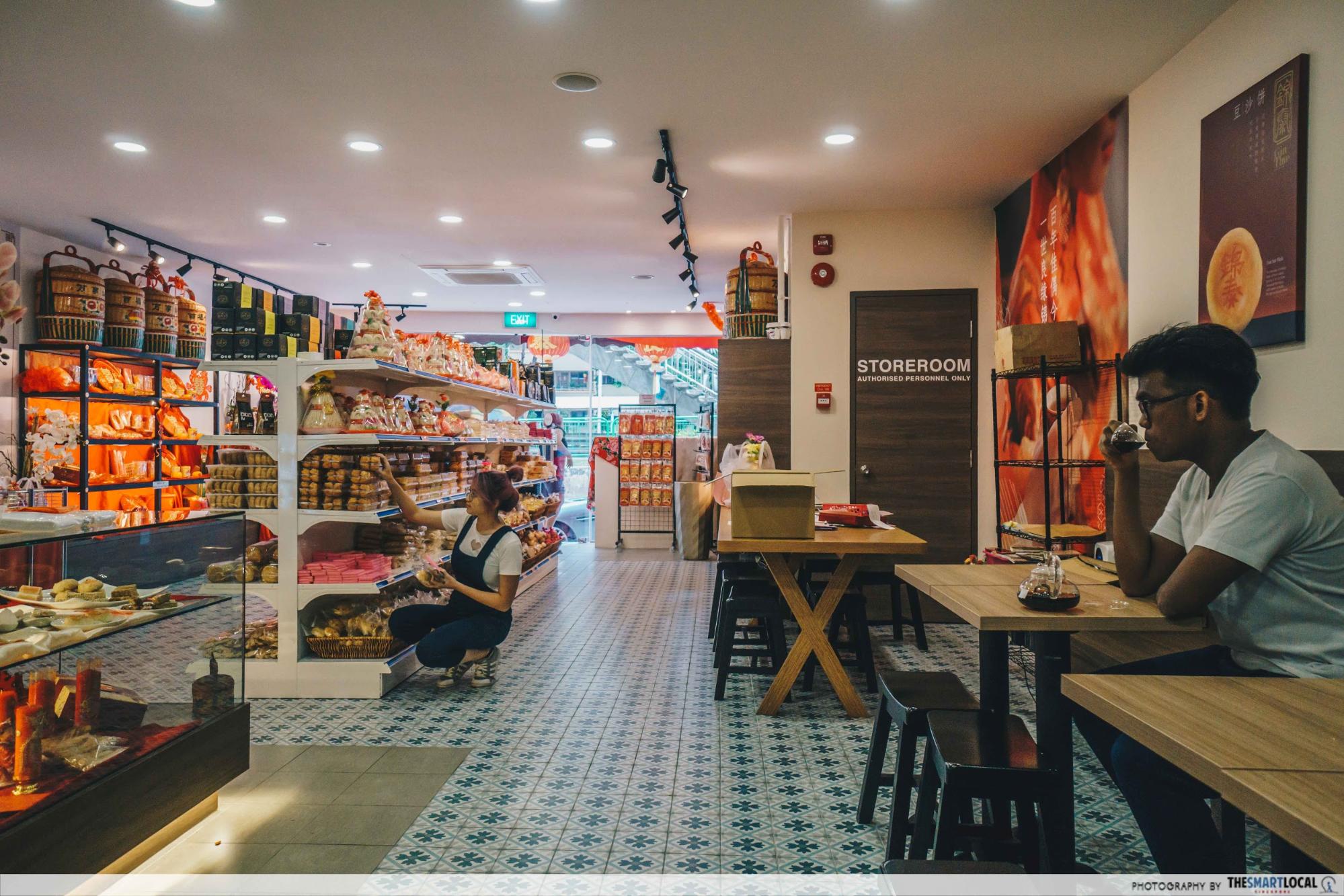 Back in the day, Lim Bak Chai and his siblings would peddle their homemade Teochew pastries at the old Sembawang Market. Eventually, Gin Thye Cake Maker established their business, which is now located at Sembawang Road.

The store is currently operated by Lim Bak Chai’s son, Lawrence Lim, who recently spearheaded a revamp; from an updated packaging to a renovated retail floor with a mini cafe to boot. 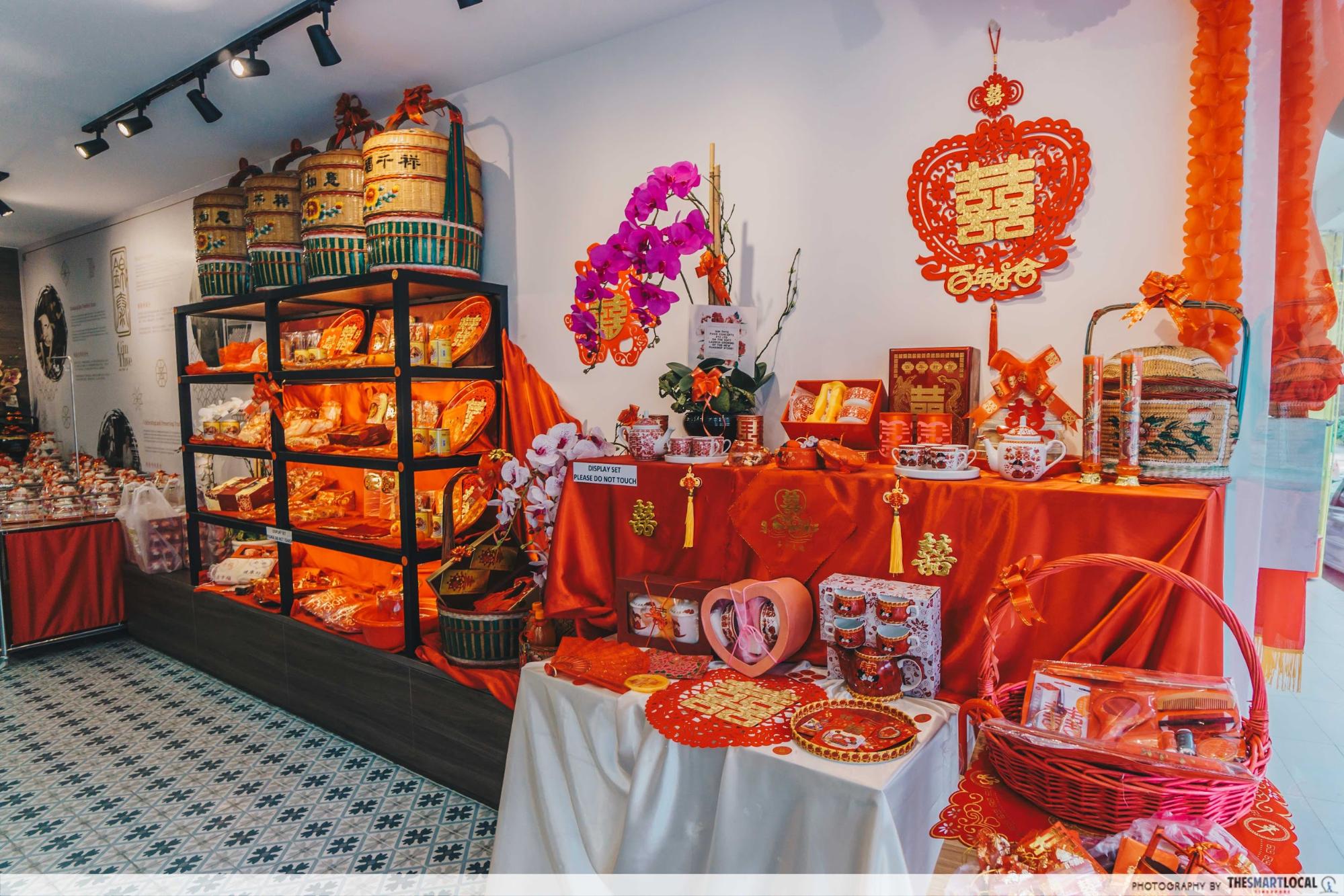 The store also sells dowry items for a Chinese wedding.

Despite the modernisation, Gin Thye stills retains much of its old school charm, proudly passing on Teochew and Hokkien culture through their sweets. 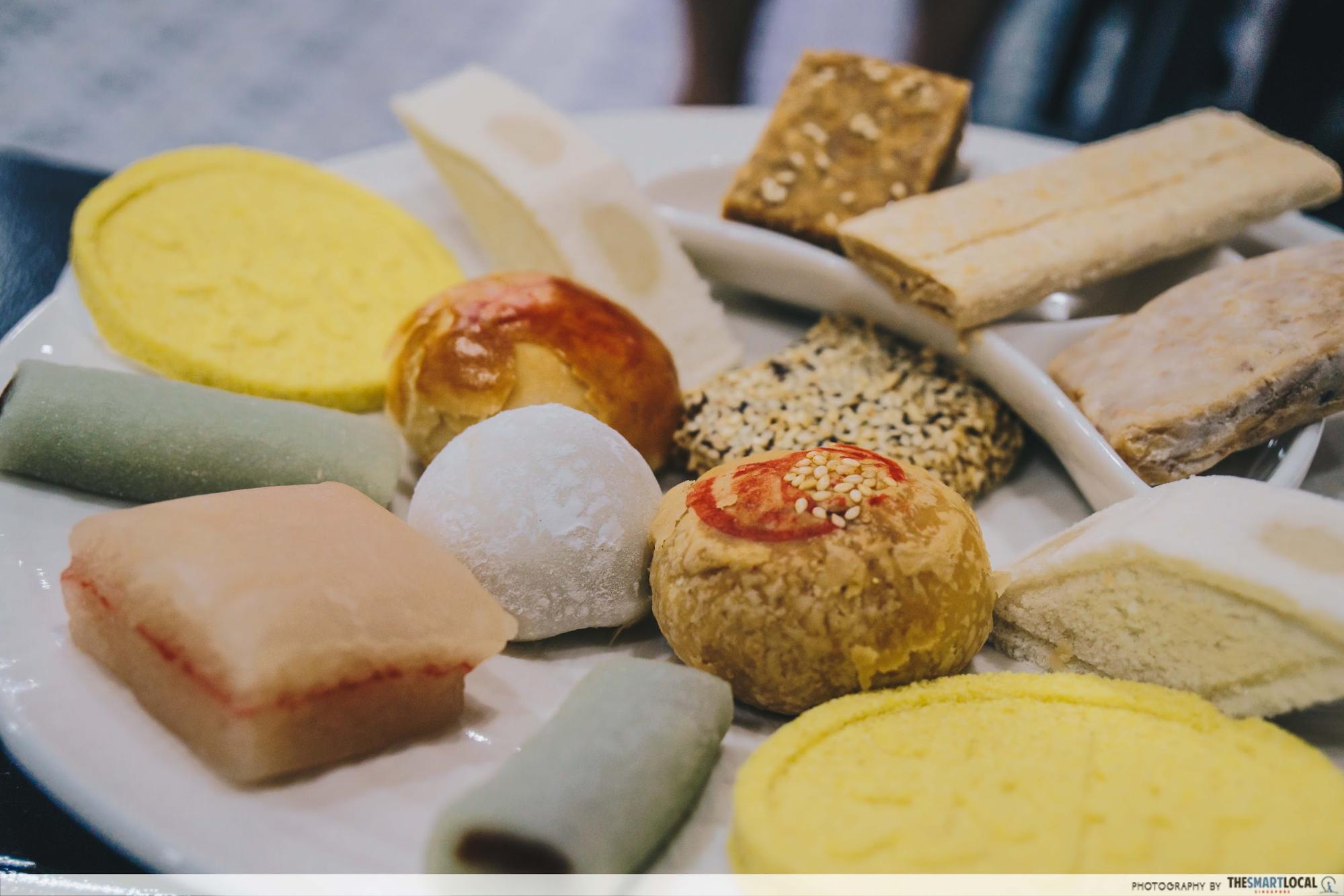 Recommended items on their menu include their Tau Sha Piah ($6) and Peanut Candy ($2) which are freshly-made daily. They also cater seasonal items for Chinese celebrations such as Chinese New Year and Hungry Ghost Festival.

6. White Restaurant – The restaurant that created the white beehoon dish 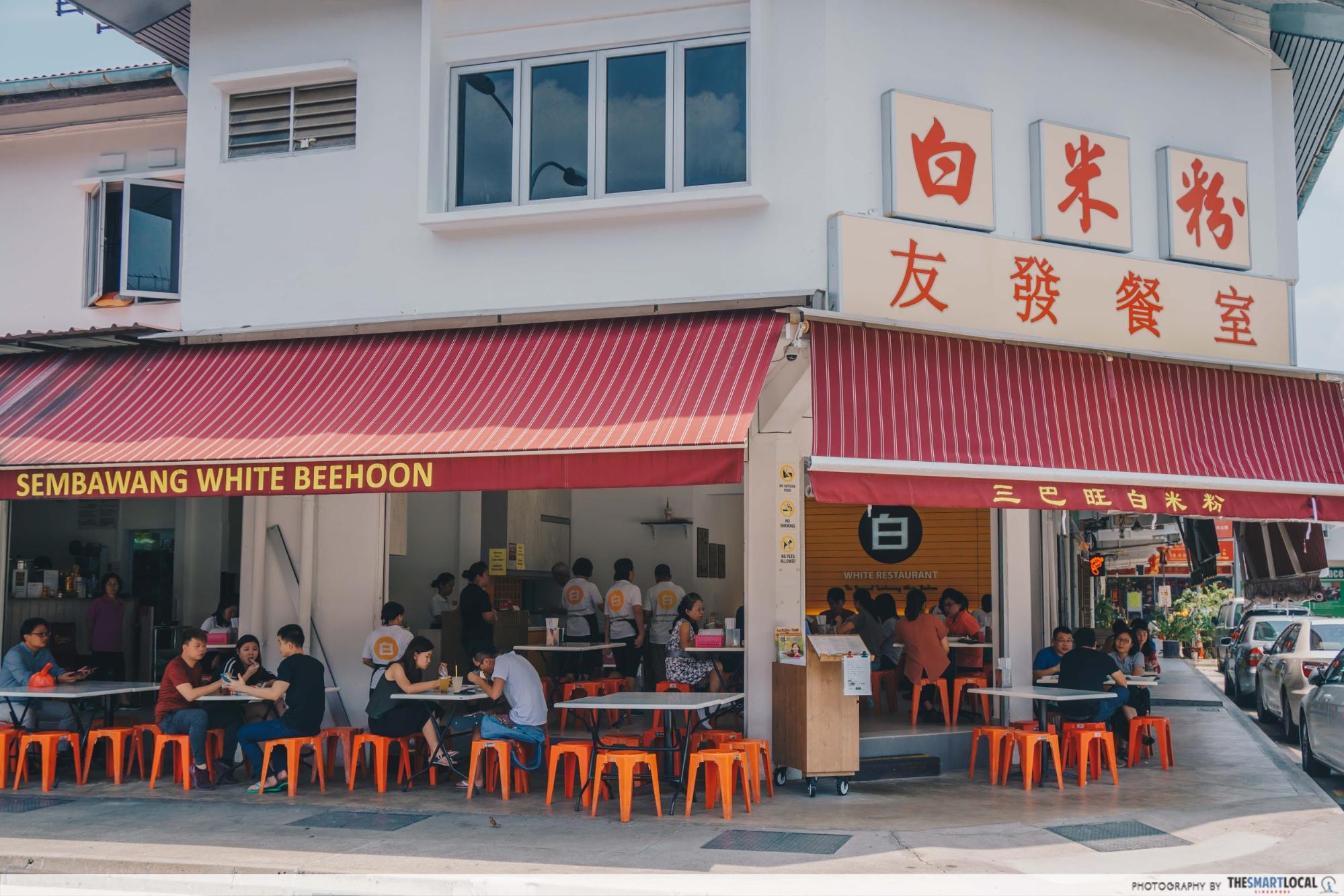 The supposed creator of the white beehoon dish, White Restaurant, has been serving customers their Original White Beehoon (from $6) since 1998. The current 2nd generation owner, Victor Tay, recounts the days when he would eagerly help out in the kitchen after school and watch his father, Mr Tay King Huak, work the floor.

Through years of observation and learning, he’s adopted his father’s principles when it comes to cooking: quality and consistency. For example, Mr Tay only uses the freshest seafood ingredients – thanks to his long-standing suppliers. 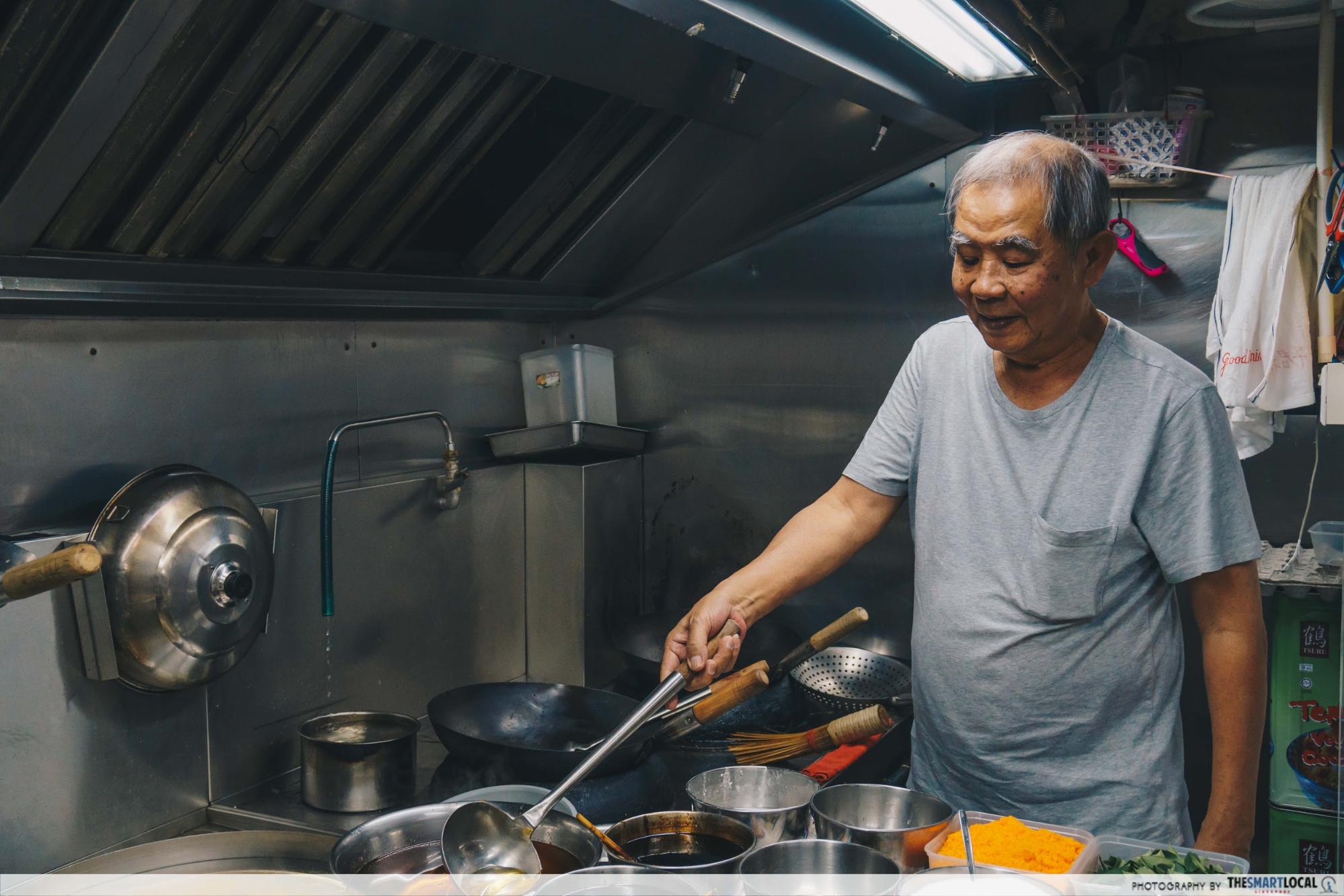 Because Chinese cooking isn’t a science, retaining the same taste in their daily operations can be tricky. As such, Mr Tay has set up several systems in place to ensure his customers get the full authentic beehoon taste. One of which is to conduct biannual refresher courses for their cooks. 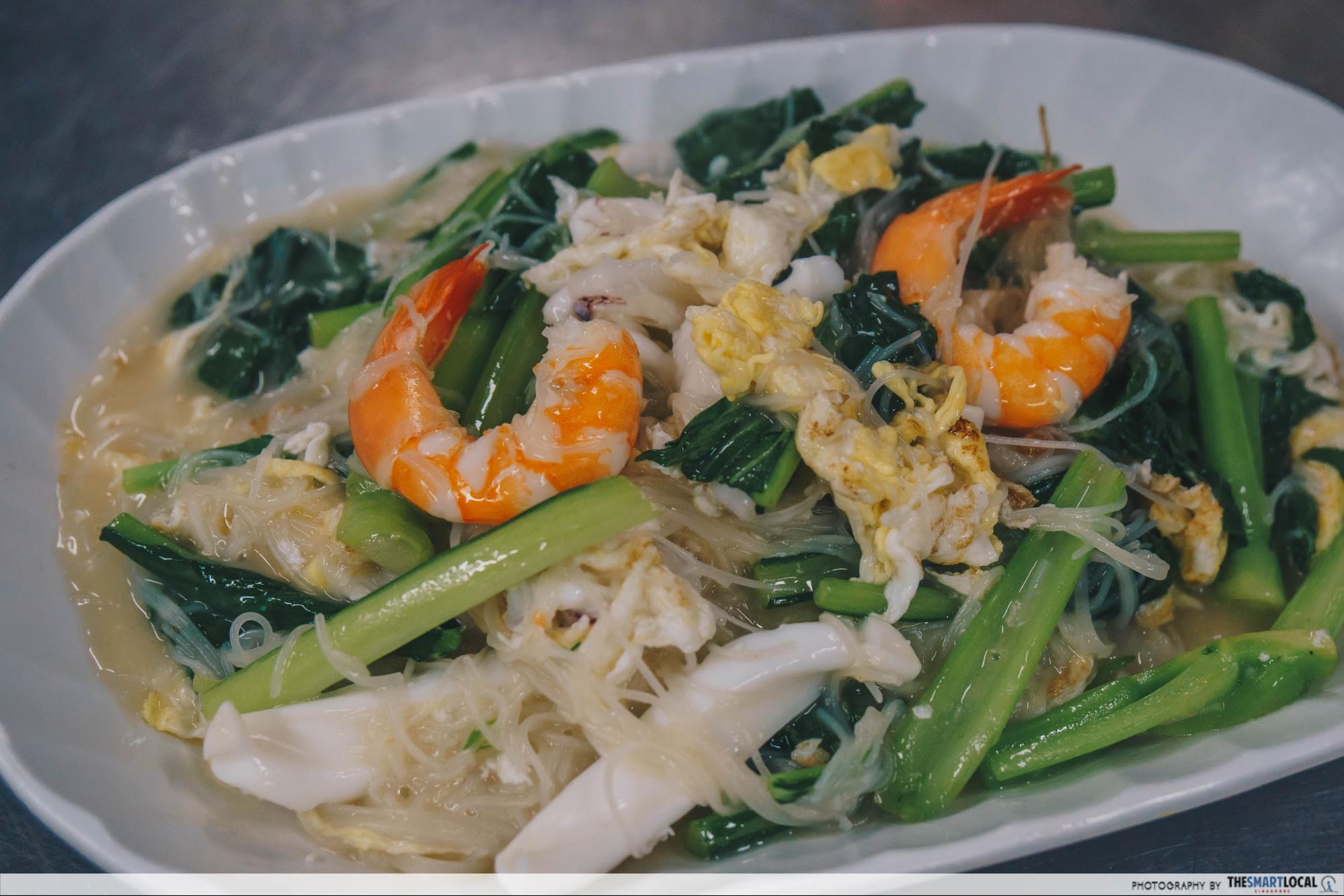 With their successes as a local hawker business, White Restaurant has established 4 more branches to reach their loyal customers living at the ends of Singapore. However, they’re not stopping there as they’re planning to franchise the chain overseas.

Take a walk down memory lane at Kampung Sembawang 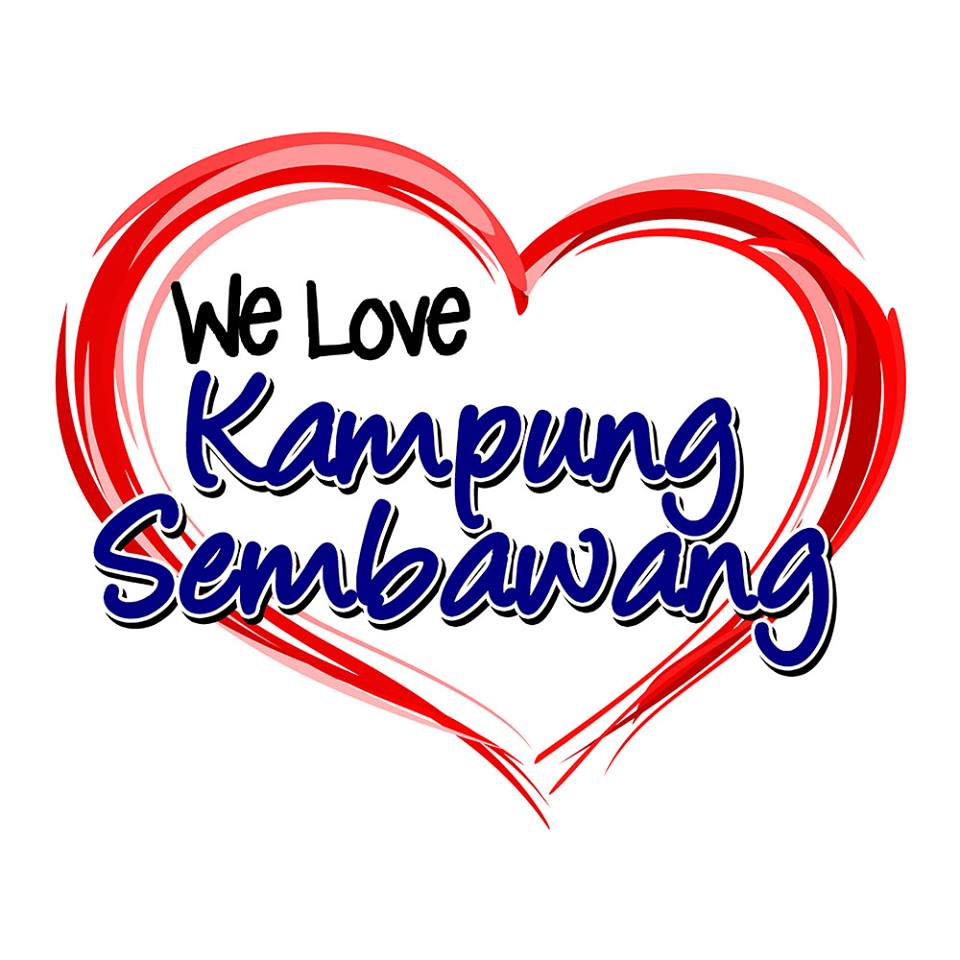 While these 6 businesses operate in very different fields, a common thread ties them together: the passion for their trade and the binding desire to preserve the memories.

So if you’re looking to get a new bike or a nostalgic spot to lepak with good company, head down to Sembawang. These remnants of the past serve as a friendly reminder of the good old days in the midst of our rapidly changing lives.