Tucked away in the basement of the exclusive Crocksfords Tower sits Feng Shui Inn, a fine-dining restaurant that specialises in Cantonese cuisine. Perhaps due to its remote location, this place exudes a sense of exclusivity away from the usual throng of casino punters.

Feng Shui Inn is no stranger to joint collaborations with acclaimed chefs and this time, it is renowned Hong Kong chef Peter Tsang gracing the kitchen, showcasing his stellar culinary skills through a specially crafted menu that reflects the best of Cantonese cuisine.

Having heard of Chef Tsang’s numerous awards and accolades in the culinary industry, I was excited to try out his latest creations.

As with most traditional restaurants, our first course was the cold plate, or otherwise known as 冷盘. Feng Shui Inn did just that by serving up the Chilled Crystal Lobster with Asparagus and Carrot, literally, on a cold plate. 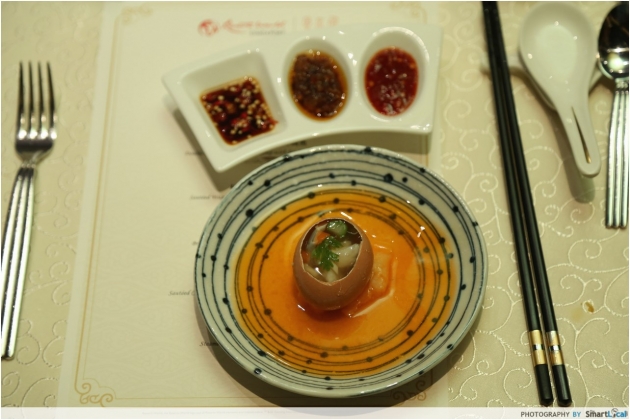 With nuggets of succulent lobster meat, carrots and asparagus suspended within a premium chicken stock jelly, topped with a sprig of parsley, all encased within an eggshell, this dish tops the charts for its innovative presentation. Taste-wise, the refreshing medley made a good starter for the rest of the dishes. 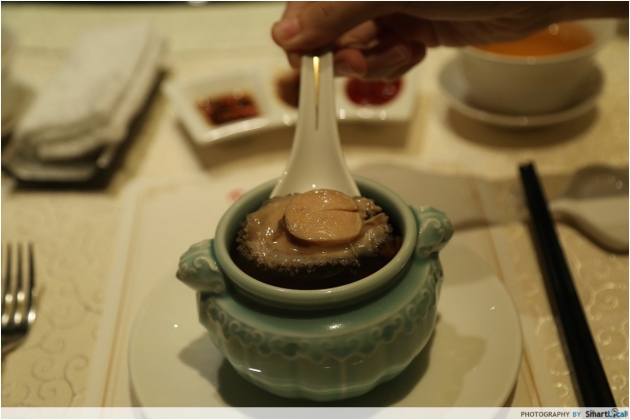 Being Asian, nothing says comfort like a hearty bowl of soup. The Double-Boiled Fresh Abalone Soup with Sea Coconuts with Fungus came in an exquisite traditional Chinese soup bowl.

Using Chinese fungus, fresh sea cucumber and whole South African abalone (shell intact!), this soup is as fresh as it gets. Chef Tsang also insists on using fresh abalone over canned ones for a fuller flavour. It was so delicious that it didn’t take much effort for me to guzzle down the entire bowl. 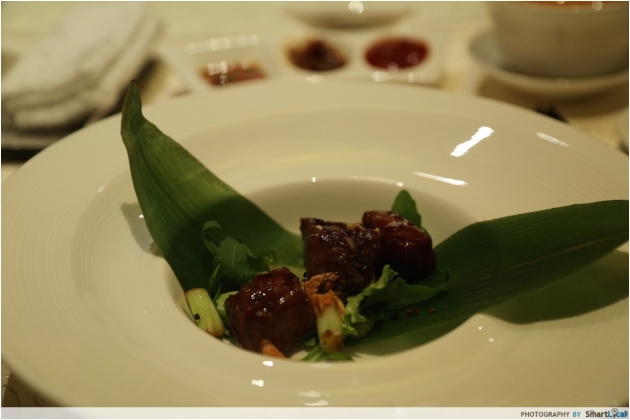 We had the Sauteed Wagyu Beef Tenderloin with Black Truffle & Garlic which was my favourite dish of the day. Savoury black truffle sauce drizzled over chunky, juicy cubes of Wagyu beef, topped with bits of black truffle, deep fried garlic slices, and scallion pieces proved to be a heavenly combination both in taste and in elevating the dish’s overall texture. These delicious morsels left me wanting for more. 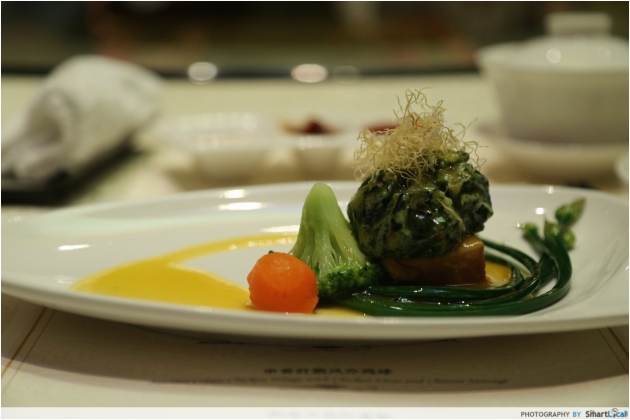 A green ball mass of spinach sits snugly atop a golden piece of beancurd, topped with thin brown ginger strips then finished with a yellow splash of conpoy chicken stock aside several asparagus – the Braised Spinach Beancurd with Conpoy in Chicken Stock was the most visually appealing dish of the lot.

Its taste matched up pretty well too. The chicken conpoy soup was so well-incorporated within the spinach ball that I could hardly taste the greens at all (in a good way). The thin strips of ginger also helped to lift the dish. 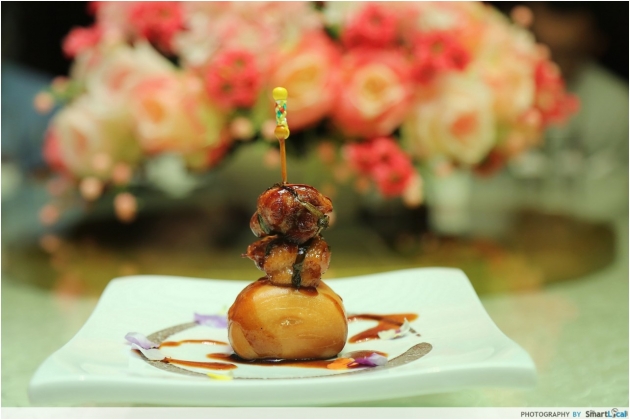 Innards never went well with me and as such, I was the most intimidated by the Sauteed Crispy Chicken Wings with Chicken Liver and Chinese Sausage. With chicken liver and Chinese sausage stuffed within a mid joint wing and skewered together with a piece of mantou, Chef Tsang cleverly conceals the scariest part of the dish within harmless chicken kebabs. The end result? Tasty chicken cubes sans the revolting taste of chicken liver. 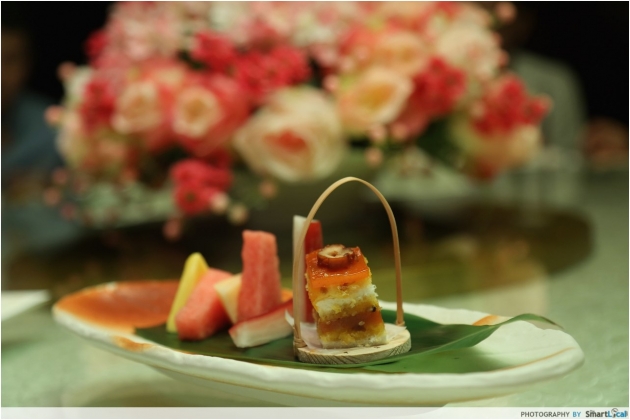 For dessert, we had the Steamed Layer Red Date Cake with Custards served alongside several slices of seasonal fruits. While the aroma of the red dates was inviting, I felt that the flavour of red dates in the cake was a tad too overpowering.

Was surprised to end our meal with a serving of fruits after the delectable dishes that came before. The dessert’s only saving grace was that the platter was graced by two rare slices of jambu, a lesser-known fruit in Singapore.

Apart from the dessert, I enjoyed the food here as much as I enjoyed admiring them. In my opinion, Chef Tsang’s nailed it with his innovation in food presentation, making the dishes an enjoyable feast for both my tummy and my eyes.

Some items are also available in the Ala Carte menu starting from $22++.

The special menu by Chef Peter Tsang will be available at Feng Shui Inn, Resorts World Sentosa from 22 September 2014 to 12 October 2014.

Getting to Feng Shui Inn

This post was made possible thanks to Resorts World Singapore.

0
SHARES
ShareTweet
FIX - The Cafe With The Most Photogenic Food in Singapore
First Look: CHOCTOBER! Chocolate-Themed Dining At Concorde Hotel This October