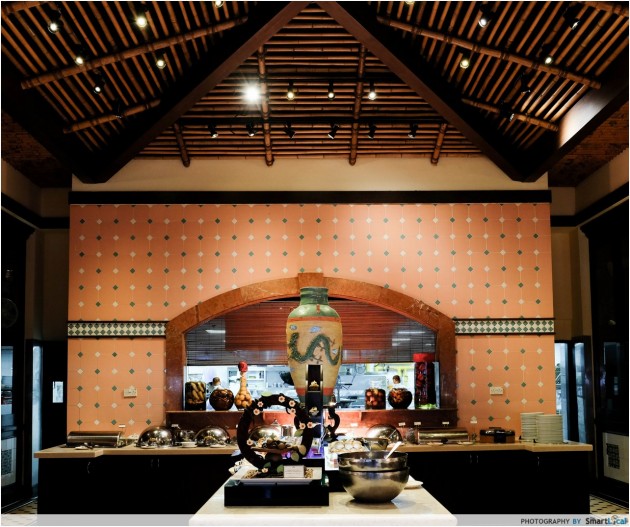 Ellenborough Market Cafe, located in Swissotel Merchant Road, is a long-standing buffet serving Peranakan and international fare. The interior of the cafe reflects its theme, a colonial-style building with a Peranakan-inspired design adorning the walls and floor.

From now till 26th July 2015, Ellenborough is bringing back ‘Sensational Seafood’ – a buffet spread of seafood such as Canadian Black Mussels and a wide variation of crabs, coming at $68++ for adults and $34++ for children.

Apart from the seafood, buffet regulars such as sashimi and its signature Durian Pengat are offered as well, alongside Asian dishes like prawn noodles and steamed grouper. We were offered a selection of standout items on the buffet line, and this is our review. 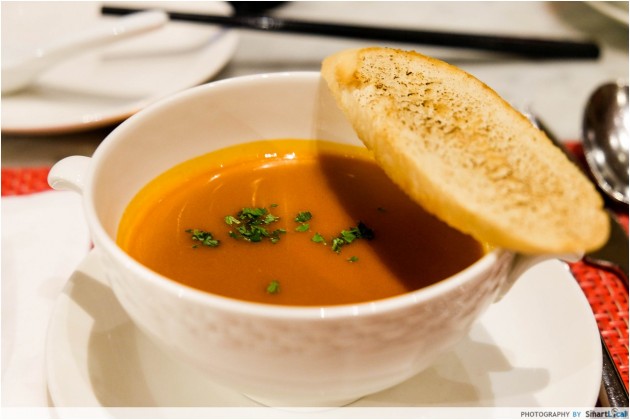 First up, we were served a bowl of Crab Bisque, which came with a side of toast. It was a bit of a disappointment – the soup was the most average crab bisque that I’d tasted. I couldn’t differentiate the crab’s flavor apart from the salt and starch in the soup. If this bowl were served without any introductions, I’d have thought it was a regular bowl of chicken soup. 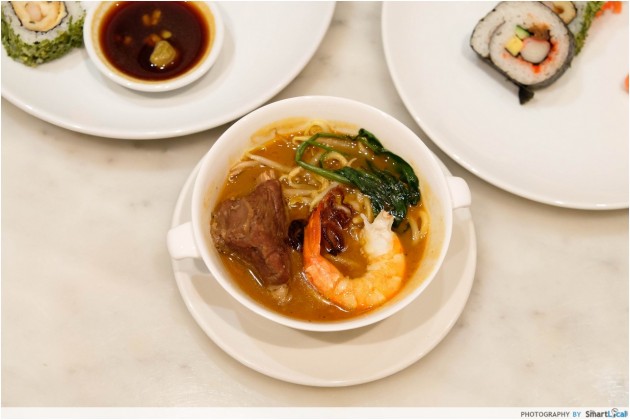 A bowl of regular prawn noodles stewed with a piece of pork, the Mantis Prawn Noodles had a very strong prawn flavour, which I enjoyed. The noodles were sticky and chewy, and they had a slightly smoky taste. I like that a piece of pork was included in the noodles, which gave it a meaty taste to complement the prawn flavour. 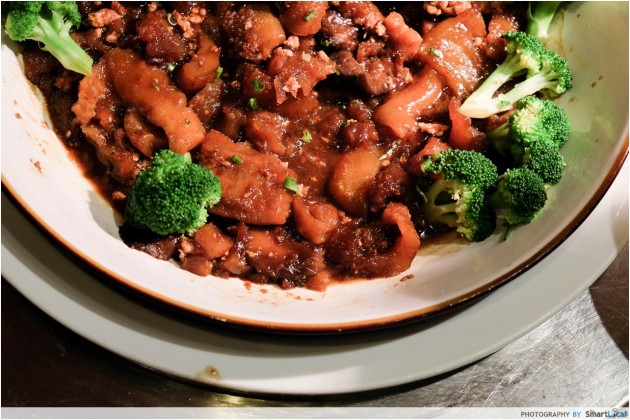 The Sea Cucumber with Fish Maw had a springy texture, accompanied with the thick, salty broth. The sea cucumber was chewy, but I felt that the broth overpowered the rest of the dish. It would have gone down better if it was served with white rice instead to mask the strong sea cucumber aftertaste. 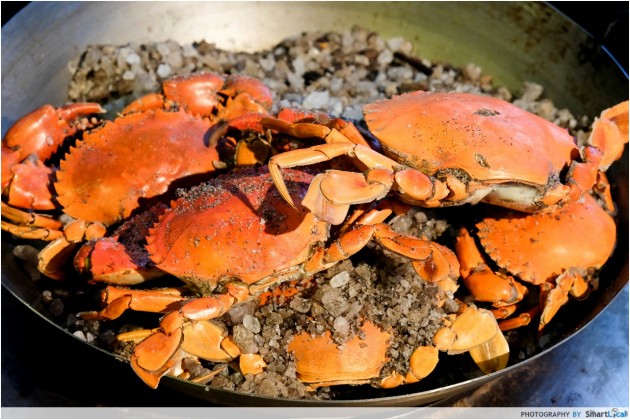 This dish, despite looking impressive, didn’t leave me satisfied. The flesh of the Salt Baked Crab was dry, instead of the moist texture that I’m accustomed to. The baking process made the crab saltier that it should have been, and I felt that the chef could have gone easier with the rock salt. 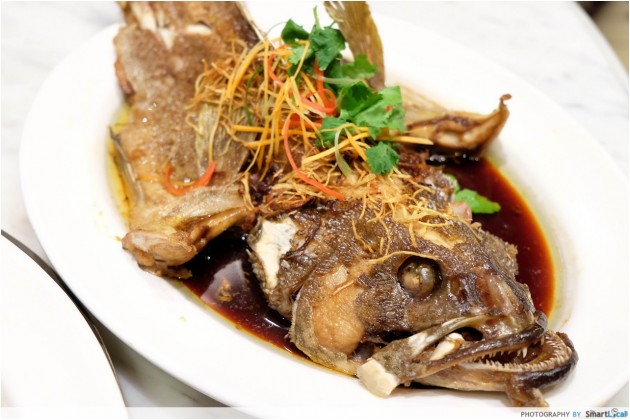 Similar to the sea cucumber above, I felt that the Steamed Grouper with Superior Sauce would have tasted better if served with rice. The fish itself was dry on the inside, although it retained a firm and soft texture on the exterior. I attempted to moisten the meat with some of the sauce, but that did little to help it apart from making it saltier. 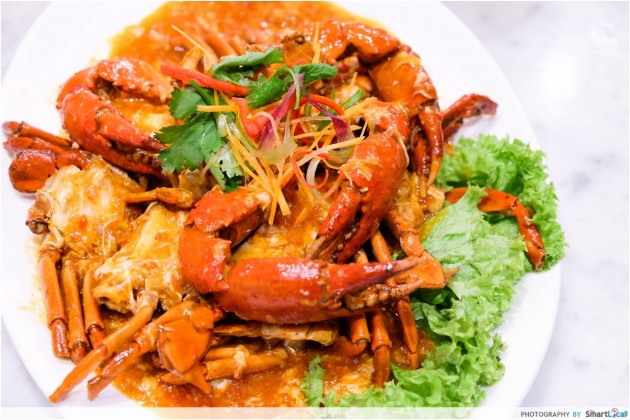 A good chili crab sauce should be equal parts sweet, sour and spicy, giving you a powerful kick of flavour once it enters your mouth. The Chili Crab with Mantou had none of that though. The sauce was too sour for my tastes, and I felt it could be sweeter and spicier. The mantou was lightly fried, and had all the crispness and fluffiness you’d expect from a good mantou.

It’s a pity that the sauce wasn’t good enough – a great chili crab sauce would have went perfectly with the mantou. The crab itself wasn’t much to shout about – you’d be better off having crab at a hawker centre. 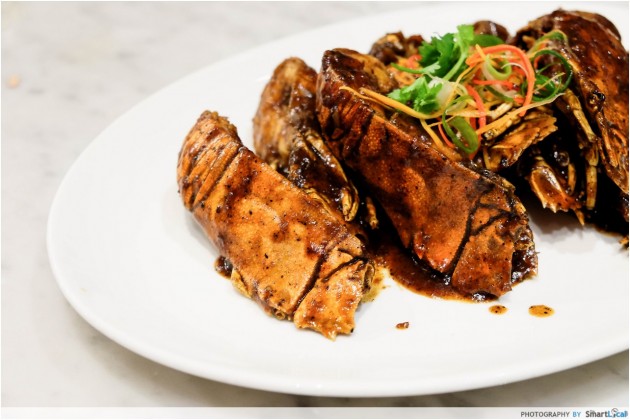 The Black Pepper Slipper Lobster was a welcome change from the immensely salty prior dishes. Still retaining the juiciness of the crustacean, the black pepper added a strong kick to the meat. This was one of the dishes brought out that I really enjoyed.

We took the opportunity to sample the seafood items on the buffet as well, as well as the items on the grill. 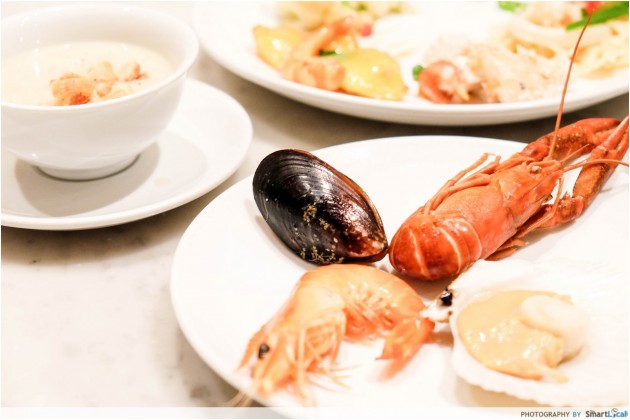 The prawns were thick and fresh, delectable without the help of lemon juice or any of the accompanying sauces. Easy to de-shell and delicious, the prawns were the highlight of the seafood stations.

The baby lobsters were fresh as well, though they weren’t as juicy and tasteful as the prawns. Although small, the lobsters were a delight to consume. Make sure you grab this and the prawns if you’re at Ellenborough.

The Canadian Black Mussels, unlike the earlier two crustaceans, weren’t as fresh as we expected them to be. The hard shell hides a small mussel piece, which was hard and chewy, unlike other mussels that I’d tried. Skip this if you’re a discerning seafood person.

The final item on the seafood station, the scallops, weren’t fresh as well. In a recurring theme with Ellenborough, the scallops left me unsatisfied – save your stomach space for something worth it. 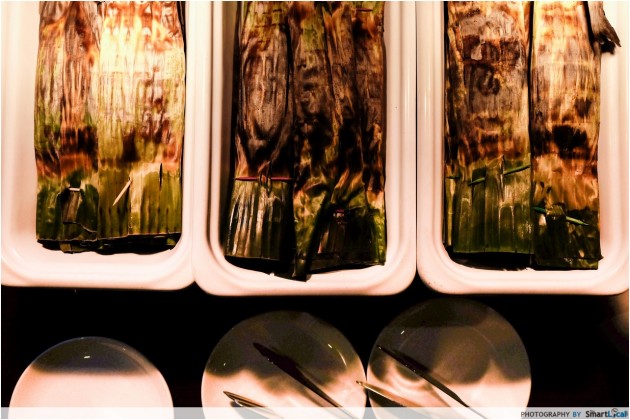 Three different variations on the local favorite otak-otak are available at Ellenborough – fish, squid, and chicken. The squid otak-otak had a much meatier texture than usual otak-otaks, which was a welcome change. I couldn’t really tell the difference in taste between the otak-otaks though. 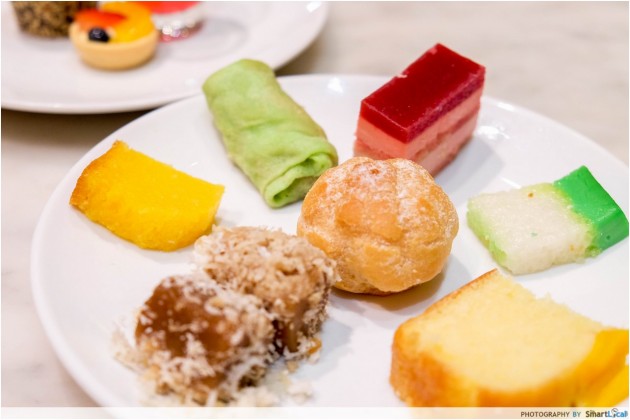 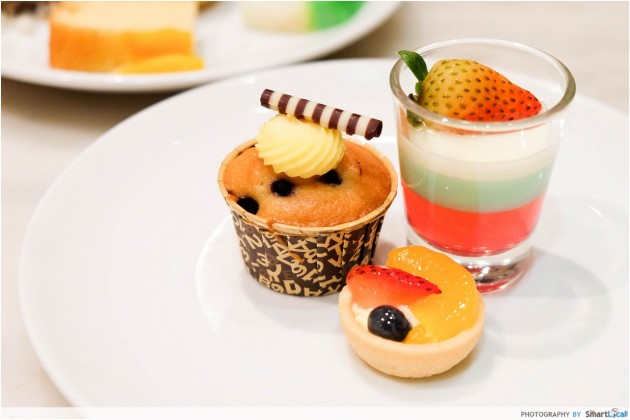 If there’s one saving grace of Ellenborough’s buffet, it’s the dessert spread. With options from bobo chacha to western cakes, the range of desserts at Ellenborough was extensive. I particularly enjoyed the Durian Pengat, a creamy durian paste, as well as the peanut butter cream puff, which brought a new taste to the boring cream puffs of old. 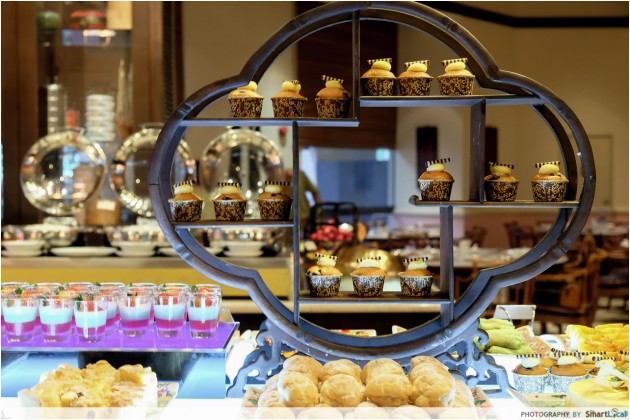 Ellenborough Market Cafe has many things going for it. A nicely decorated interior, a central location close to the heart of the city, and great service. However, the main selling point of a restaurant has to be its food. And sadly, Ellenborough’s food just isn’t up to par. Apart from the lobsters, prawns, and dessert, the rest of the food isn’t worth it. For the price that you’ll be paying, you could have a much better meal elsewhere.

This post was brought to you by Ellenborough Market Cafe. 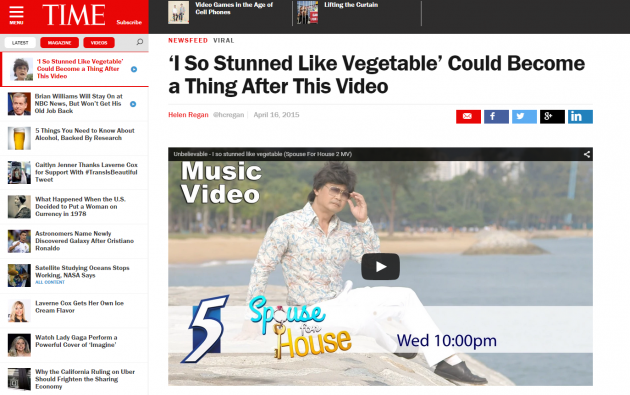 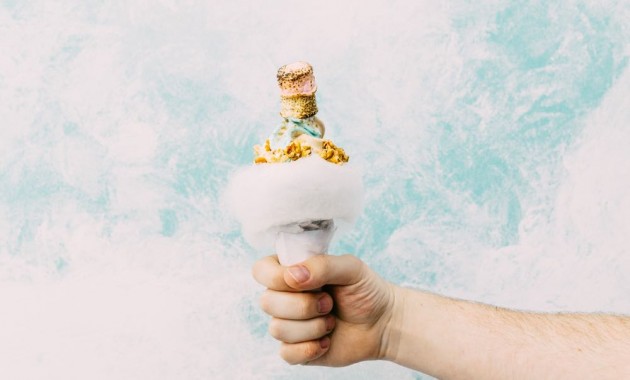