The one thing every young Singaporean relationship dreads – two words, say it and your girlfriend will be gone. National Service can be a very testing period for most if not all, relationships. I’ve witnessed far too many relationships fail because of time spent apart during NS – drifting apart, lack of trust, inability to compromise for one another… the list goes on.

I’m not going to lie, I wasn’t tremendously confident that my own relationship would last. But after months of turbulent arguments, cold wars, and one too many late night phone calls; ironically, I’ve discovered the virtues of having a NSF boyfriend.

I had my fears that NS might change my other half to someone I wouldn’t recognise, but change isn’t always a bad thing! And in fact it brought up the better aspects of him I never knew existed, mentally, and physically. To paraphrase what Jack Neo said, ‘the boys become men’.

So, ladies if you’re reading this – start to appreciate your Tekong bound boy more, and for the guys – not all hope is lost in the dating game; use this guide as your selling points.

This is the number one perk. Okay, so you have to deal with him having no hair for the entirety of BMT but bam honey I am not joking. He’ll get definition in places you never knew he could. Bless you uncalled-for punishments. Bless you PT. Thank you for making my lazy-bones, McDonald’s-loving boyfriend even more attractive than he already is.

Not that looks are everything of course, I love my man every number of the weighing scale but the defined abs and shoulders, (and omg the arms and thighs) really is the icing on the cake on top of his wonderful sense of humour.

2. You’ll never run out of things to talk about My phone bill when he first went into BMT. Thanks StarHub.

You might not get to spend hours upon hours on the phone together or even in the flesh but a silver lining about is you’ll never run out of conversation topics with one another. Besides, the time spent apart from each other gives you the liberty to blow him away with stories every weekend of your wonderful misadventures.

As a relationship progresses, the two of you become integral part of each others’ lives. Which is wonderful in its own soulmate-esque way but you’ll soon realise that most of your interests overlap and you won’t have experiences to call your own. Which, not going to lie, may cause some relationships to dry up.

3. He’ll have his own money to spend Gone are the days having your dates at McDonald’s because now you guys ballin’, you can upsize that value meal and get shaker fries. You can even *gasp* get reservations at restaurants now!

Since your NSF bae has some form of liquidity in his bank, he might take you out to fancier dinners, or maybe even surprise you with little gifts every now and then! But don’t take it too much for granted though – it’s still not a lot of money. Appreciate whatever he does for you!

And, as this is his money, his hard earned money, of blood, sweat, and encik yellings, he’ll definitely feel more proud of spending that money on experiences with you. And isn’t it all the more attractive to have a boyfriend that doesn’t have to ask his parents for money before bringing you out?

But then again, every single thing he does for you, money or not, becomes twice as lovely due to his limited free time. So even if it’s just making brownies, anything he does for you somehow becomes extra special. I mean, he could be gaming, right?

Not that we can control our significant other’s thoughts but I can almost guarantee that every moment he gets alone will be done thinking about you, or even when he’s with his friends. Although he may not be able to text you an ‘I miss you’ whenever he wants to, it’s safe to say you’re his happy thought that gets him through the weeks!

He might not always say it because of his ‘manly ego’ but you’ll always be a hot topic in his bunk, be it talking about ‘chio bus’ or girlfriends. And here’s a lesser known secret, if you listen clearly during your night phone calls, you’ll occasionally hear his section mates teasing him about it.

Not exaggerating in the slightest here but almost every morning I’ll receive an ‘I love you.’ or ‘I miss you.’ Which is a wonderful little present to wake up to and know that you’re the first thing on his mind. There is no way that he can cheat on you. If he is straight. So you have a peace of mind there. There is also ‘NO TAHM’ even if there were female regulars.

Thank god NS put an end to my boyfriend whining to his maid to do every single mundane task for him! I’m only half kidding, but since he enlisted, I’ve finally seen and appreciated him for the man he has become. Your boyfriend will have found this new confidence and ability to take control of situations, especially those that involve a lot of military precision in planning (thank you outfield!). He is able to handle stress, becomes more discipline, and rarely ever appears late for dates!

It’s safe to say he truly becomes the knight in shining smart four you always fantasised about being with since you were a little girl.

Being on your own will give you the time to reflect and morph back into the girl he fell in love with in the first place, the one with her original ideas and hilarious anecdotes about her family and friends.

This is a very VERY important point (print this out, book mark this, highlight it, whatever).

Yes spending all the time you have in the world with your boyfriend is amazing since he is your other half, two sides of the same coin what-have-you. But NS is major mandatory cockblock between the two of you. This allows you to make your own decisions, plan your itinerary, and divide your time wisely.

If you feel too uncomfortable being on your own, get in touch with old friends! Or friends you’ve forsaken at the expense of hanging and devoting all your time to your boyfriend before his enlistment (don’t’ deny this – if you’re reading this you’re probably guilty).

Take the time out and go back to hanging with the crew! But first craft an appropriate yet witty response to explain you long gone absence from you know, the real world. 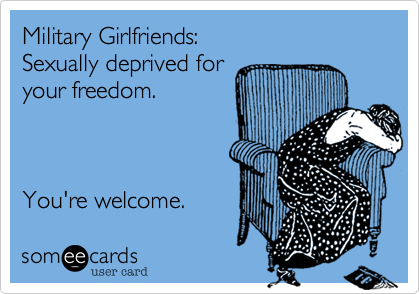 And given how much time he spends around so. many. dudes. I guarantee he won’t be able to keep his hands off you when he finally gets to see you when he books out. Coupled with the testosterone-saturated air that is his camp, there will be loads of pent up tension that will need an outlet to be released. Plus, obviously, he misses you terribly.

9. He’ll have something to talk about to your male family members

As a daughter who has your stereotypical over the top strict father that still thinks I’m 12, having a boyfriend in NS works wonders in breaking that father vs potential bait boyfriend barrier. One thing he can definitely score brownie points is the universal suffering of mandatory National Service for two years. Plus, your dad might deem him manly enough for going through NS and thus able to defend his little girl.

Granted, due to the generational gaps, this will differ, but some things never change. From sadistic and ridiculous punishments to comparing girlfriends in bunkers, discussing NS experiences are a swell ice breaker during family gatherings.

10. He somehow behaves better in public 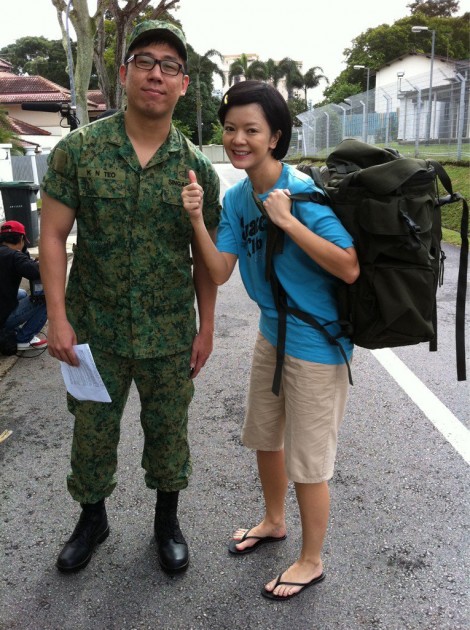 Now that the your boy is part of the SAF, he is now a MAN with an image to uphold:  the face of Singapore’s first line of defence. Also the punishments for getting caught for misconduct off duty are pretty severe. There are too many photos of botak guys sitting on the MRT reserved seats on some websites.

He’s in NS, and he knows that the general public thinks of him as a chao recruit especially when he wears his uniform, and are always looking for opportunities to kaopeh to MINDEF. Plus, with the strict regimentation he goes through, he’s far more disciplined, even when he’s out of camp!

11. You’ll feel a sense of achievement for each other. You stink but I am proud of you so I’ll take a photo with you.

POP, SOCIAL NIGHT, ORD… all these occasions are that are milestones! There is no other greater feeling of pride than seeing your boyfriend after his 24 km overnight route march, or seeing him all decked out in his number 2 looking sharp as a bayonet. It’s a legit reason to shamelessly ask bystanders to take photos for you to flaunt on Instagram on how manly and capable your other half is.

At the end of everything, if both of you are still together and in love with each other more than ever, it’s an occasion to celebrate! As most of us know, most relationships don’t stand the test of NS, but if yours does, you’ll realise that you’ve got a pretty good thing going on with each other. Treasure it.

So hang tight – it’s worth it!

Yes, many boys who have ORD-ed have a tragic story to tell about how a relationship has failed during their two years in NS. Girls I’ve met have told me stories of how their knight in shining armour were revealed to be just tin soldiers after enlisting. Be it an unrequited crush, the lost of a relationship that could’ve been great, or something that you thought could last forever.

It is not a walk in a park to sustain the same intensity of emotions during those turbulent two years. He’s going off to NS, and you’re moving on to a new phase of life; a new career or school and meeting new people.

It leaves for many lonely nights, which will get you thinking. Do you both really want to make things work?

When you’re young, your perspective of a real relationship is probably pretty warped thanks to all the fairytales that have been ingrained into your head, but it’s not all glass slippers and singing birds. There are evil witches and dragons that come in the form of loneliness and insecurities. Maybe even new people that come into both your lives.

But looking at the grand scheme of things, if the relationship did truly mean anything to you, both of you will work together to make it happen. You are the authors of your own fairytales, make it one you’ll want to tell people about.

Hang strong in there!